So it's once more into the dim and dusty recesses of my noodle.  This week's scatter has arrived for your delectation.  Onward! 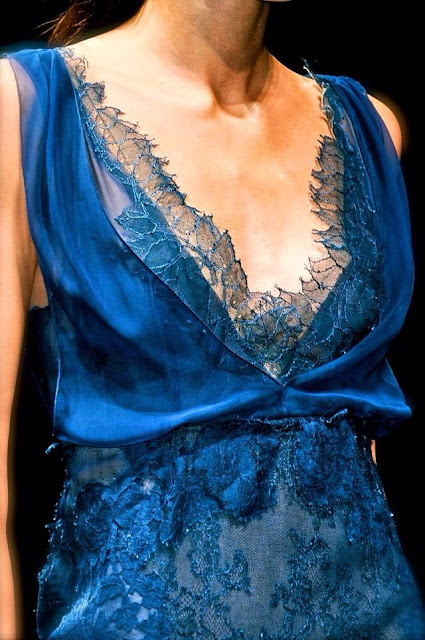 This detail image of an Alberta Ferretti dress got me thinking about layering of texture and the way that amps up what we perceive when we look at an Attire composition.  In this case, though we are seeing only two textiles in play, there are more textures than just the two, because of how they interact with each other, and with the body beneath. We have a lightweight silk, and a lace.  The silk has it's own texture, as does the lace. Combine them by layering and there is a third texture that seems to emerge.  In the case of the lace, when we see it laid over bare skin a fourth texture shows up, so even with these two elements alone, by skillful placement and usage the finished garment develops multiple shadings to it's meaning. 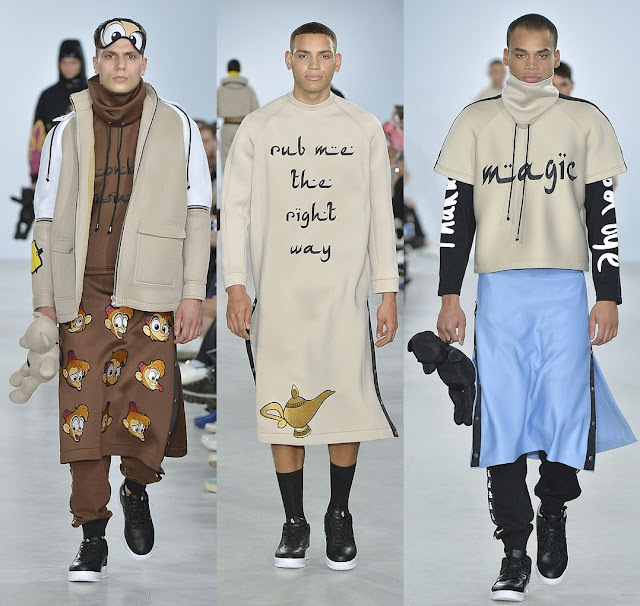 This week is going to be kinda runway heavy, since a huge amount of what has been coming to me deals with the most recent couture collections.  Bobby Abbey Menswear.  I would like to get words off of clothing.  Clothes can speak quite well without the addition of text.  In the case of these three efforts the cartoons and the writing add exactly nothing to the finished work.  In fact, to my view they actually detract from the potential of each ensemble.  Edit those elements out in your mind and you'll see what I mean. All the pieces presented are interesting and potentially applicable in real world terms, (assuming a forward thinking gent, of course).  Introduce the imagery and the potency drops off, they become frivolous, rather than clothes to be taken with any seriousness. 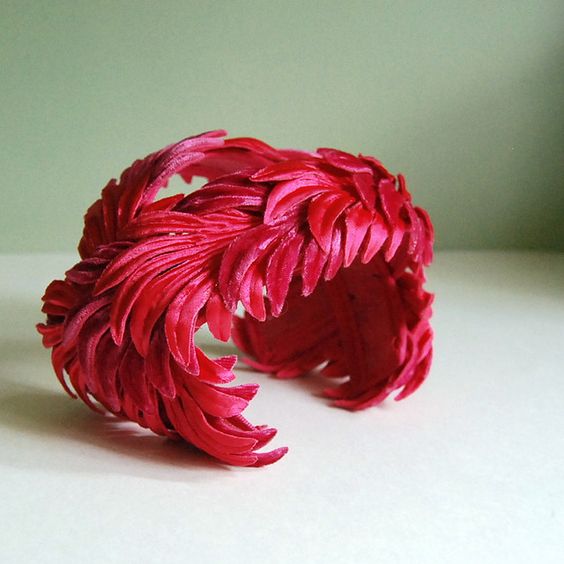 This is one of my favorite hat shapes from the 1950s.  It was essentially a vary broad headband that could be decorated in whatever taste you liked.  Hugging close to the head it provided a small scale but very effective frame for the face.  This particular one, from about 1954 is built of a fabric covered wire frame with wired red velvet leaves over its entire surface.  It's exactly the sort of hat that would have been considered correct for a cocktail party. And yes, it was acceptable practice for a woman to wear her hat while at a cocktail event, or while dining in a restaurant. 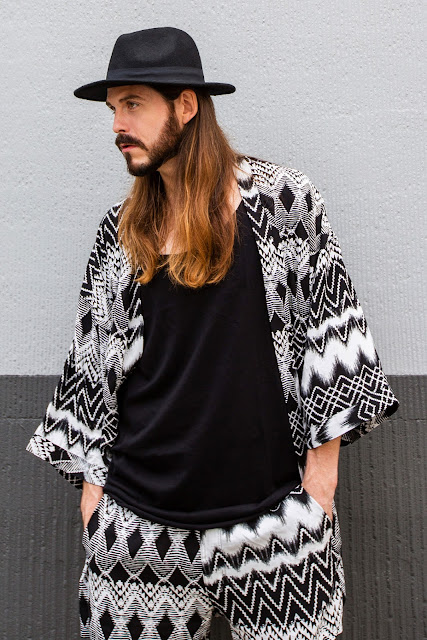 The way urban apparel is changing for men is a continuing fascination.  We are coming out of a very long dark tunnel of bland that stretched for two centuries.  This ensemble is a great new way to think about how we express through dress.  It is simple in structure, easy to wear, and adaptable to myriad body types with ease.  The bold printed textiles make it dramatic, but it could be just as successful in quieter materials.  Also, the density of the fabrics in use could allow this kind of thing to play well in any season.  I approve! 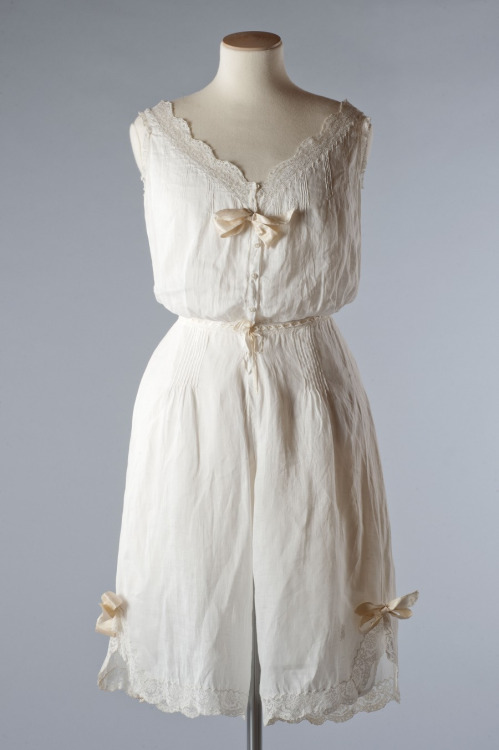 Along about the beginning of the 20th century this kind of undergear for women appeared.  It was called a combination, and it simplified dressing to a degree. By literally combining the bodice and pantalettes into a single piece it accomplished two admirable goals.  First was it made getting dressed a tiny bit quicker.  Secondly, and perhaps more importantly to the wearer, it meant that you would not be struggling with two garments shifting about with each other, nor would you have to feel the additional bulk at the waist, under your corset.  In a cultural sense it was also a further emergence, albeit a hidden one, of the great bid for freedom for women that was just beginning to build. 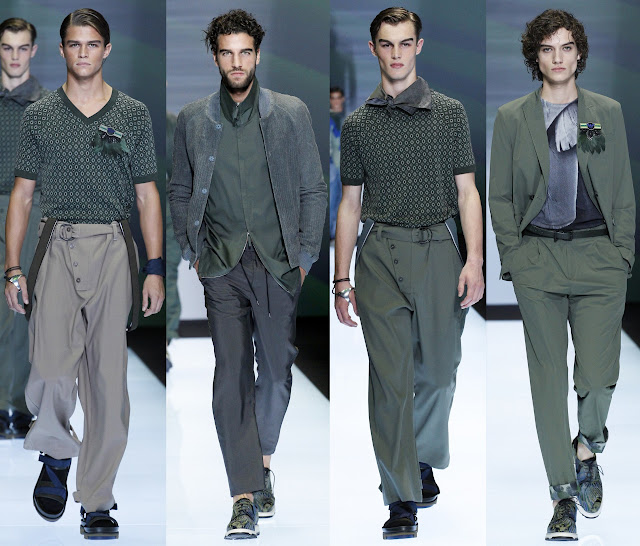 Here's another runway bit.  Emporio Armani.  Armani has always been known for playing very quietly with menswear traditions, inserting only a few small details of difference, rather than going off in a fully new direction.  This has the result of making his work seem a lot more accessible than many other more adventurous designers. In the work here there are really only two details that makes these clothes at all notable, the exterior button fly of the trousers, and the ringed self belt.  Seen from the Attire perspective it is much more common that forward motion is achieved by these seemingly inconsequential bits.  So by taking these tiny baby steps we slowly move the Attire conversation along. 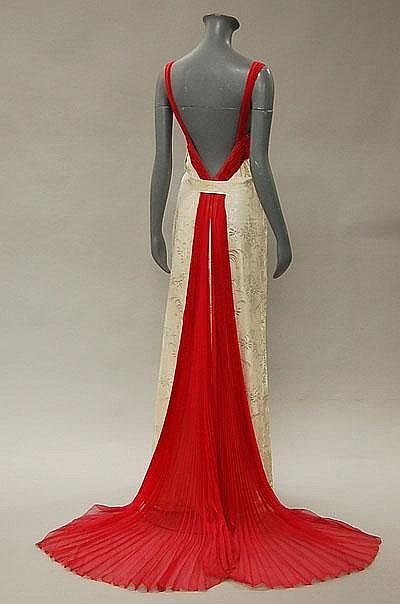 This evening dress by an unattributed designer is from the 1930s. It's a splendid example of how differing textiles in combination can create both structure and motion, as well as visual drama.  The firm structure of the figured silk body is counterpointed by the sunray pleated expanse of the red silk chiffon that drapes with such fluidity that it seems motive.  The strong line of the red also causes our eye to move and gives that eye movement a real direction to take.  Rendered in other materials the same design could still work, but the final message would be very different. 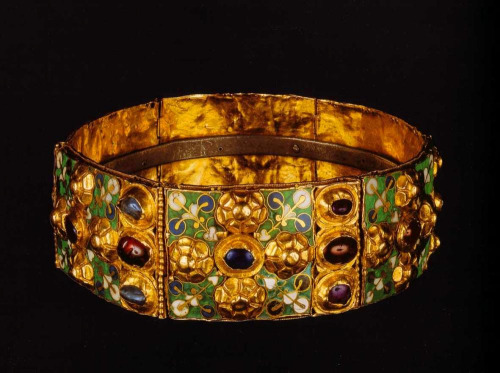 This is the Iron Crown of Lombardy. It is the oldest royal insignia known in Christendom having been made in the early Middle Ages.  Made of enameled and jeweled red gold it is a reliquary as well as a crown.  The circle of iron that connects the gold plaques from the interior is said to have been made from a nail from the True Cross. We invest immense power into the things we create for ourselves to wear.  This object, worn on the head would have conferred very high status to the wearer, especially to those who understood the meaning of the crown in its entirety.  But for those not so educated it would still have a strong, inescapable message about power.

Ah the internet, how I love you, and how you madden me.  When I came across this image the accompanying text attributes this coat to the 1930s.  While I suppose that is possible, it seems unlikely.  The image on the coat is of an Art Nouveau styled woman, very likely a copy of a piece by Alphonse Mucha, who was hugely popular during that period.  Since there was no resurgence of interest in the Art Nouveau during the 1930s it seems probable that this is actually a scarf coat from around 1900 or so.  The only thing that points more towards the 30s is the type of tassel trimming, which was commonplace at that point.  Not enough, however, to accurately date this. 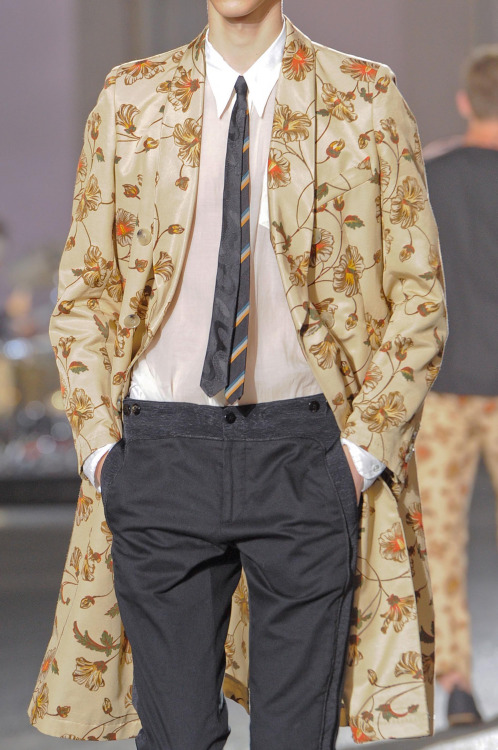 Could I? Would I? Yes and yes, I could and would.  This is one of those shifts in menswear that seems to not only be gaining ground but spreading outwards.  The appearance of floral motifs in menswear has been steadily increasing over the past several years, and it's interesting to note that it is beginning to take firm hold in the ready to wear market.  Men seem far less threatened in their masculinity by such things than they used to be.  All to the good say I. What this also allows is a greater breadth of expressive possibility for men, who have been so sartorially hampered for so long. Dries van Notten S/S 2014 Menswear. 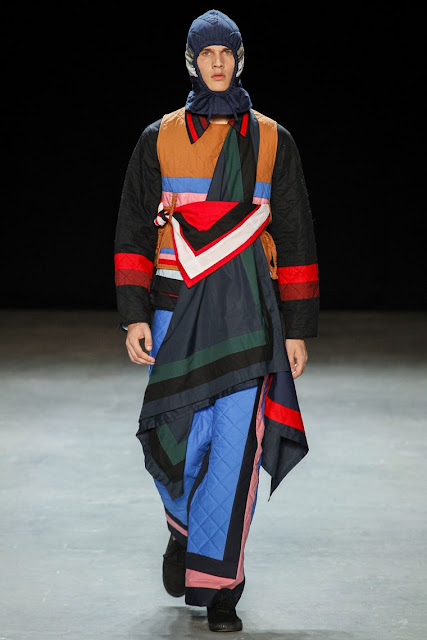 Craig Green is one of the more notable Avant Garde designers around today, and this effort from his most recent collection is no less notable.  It's a challenge, even for me.  While I am fully on board with the brilliant, bold colors and patterns. I am perplexed about the two huge scarves. One hangs from the shoulder while the other wraps the waist. Perhaps they are intended to be only decorative. If so then I'm not sure that they fully succeed.  If they are meant to have purpose beyond that, I don't see what that purpose is.  The tied scarf around the waist does not appear to be doing anything other than
taking up space.  Lastly, this is from a Spring and Summer collection.  For Antarctica?  I'm so confused. 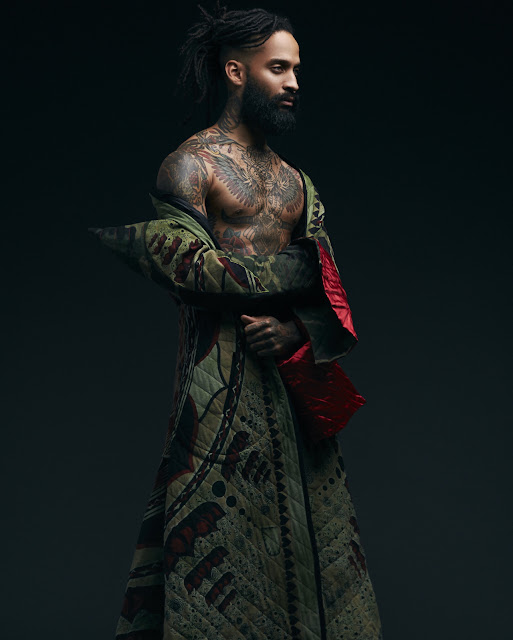 As a final installment today this image which I found just this week.  This speaks of so many things to me.  First, in looking at that amazing quilted coat, I get references to gentleman's banyans of the 1700s and 1800s. There is a profound elegance to it, both from its colors and textures.  Then there is the model with his masses of ink and full beard, giving us the hipster thing.  But even more than that this feels to me like an expression of how deeply and profoundly our world culture is changing. Where in bygone days such a juxtaposition would have been thought at very least odd, now we can see the sophistication that underlies it, because of our greater access to the world both through travel and through all the various media we indulge in, including blogs like this one.  And of course I will admit that he is ravishingly handsome, which sure doesn't hurt.

I hope you've enjoyed this weeks grouping. Now go have some fun!