Here we are at Saturday again. How do we do this so quickly?  At any rate, I have been rummaging through my brain again and here is what I picked up as I was digging through the debris.  Herewith, your Scatter for this week! 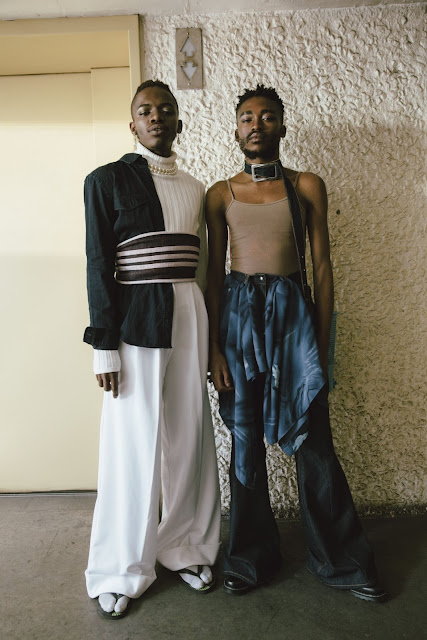 This pair of fellows is a performance art duo from Johannesburg South Africa called FAKA.  What I am loving here is how they are taking known pieces of clothing, known Attire words, and making them mean other things than they were designed to express in the first place.  To be clear, these are not the costumes they wear for their art work, this is simply how they both dress themselves.  It's a manner of clothing oneself that I feel we are going to see an increasing amount of; partly because of the merging of cultures that is continuing apace, globally, and partly because the world apparel market is becoming so homogeneous that the need to be unique in one's choices is increasing. 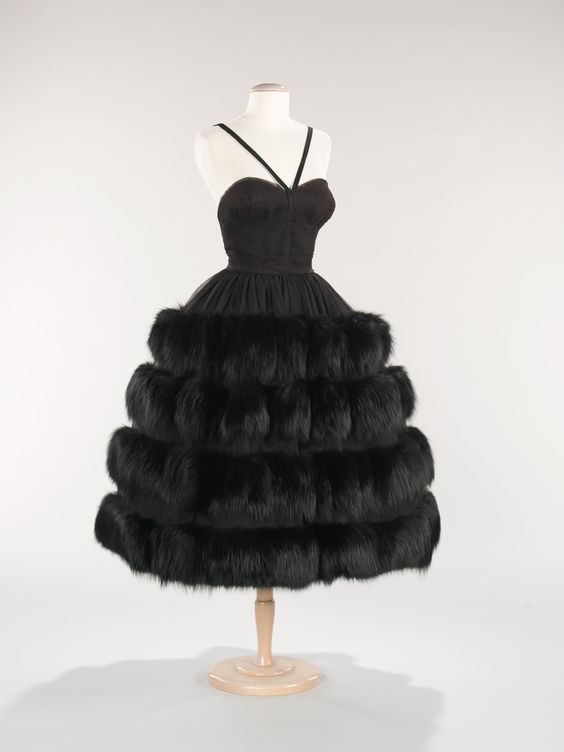 For a very long time fur has been a status statement of great significance.  It's really only since we began to face the reality of what we were about as far as animal treatment was concerned that this began to change.  But certainly in the 1950s it was still a potent cue to wealth and status.  This evening dress from the mid century is about as in your face as it can be about extravagant display.  Would this be comfy to wear?  Probably not. Surely sitting for any length of time would become a sweaty business.  Nope this is a stand and be noticed sort of garment, which is entirely the point. 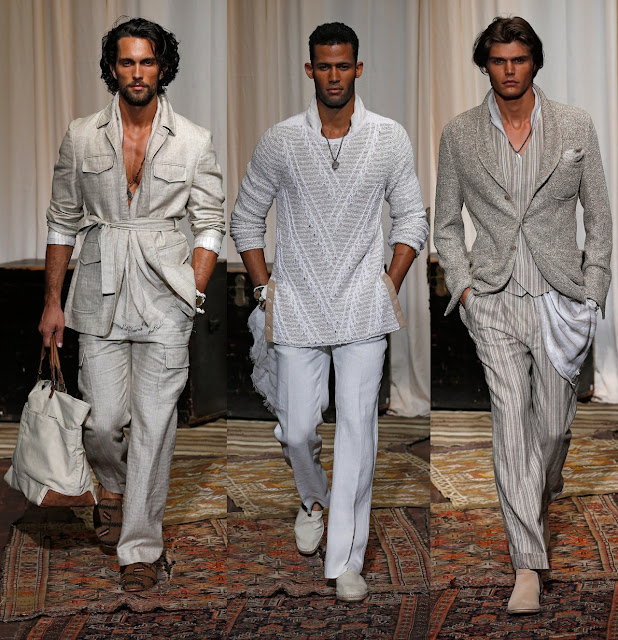 In the menswear design community, much has been and is being done to broaden the number of available Attire words men can use. At the same time there is an increasing softness to what is getting made.  Partly this is driven simply by stylistic change, and partly it is driven by the society changing how we are living, and what we need for ourselves to do so.  The rigidity of the three piece suit, as I have written before, is fading.  But we do need something in its place. So the design community is playing around with ideas.  We can choose to see this as being imposed upon us, but it is also a direct reaction to the substructure of our culture changing. The Attire language is shifting as all languages do. 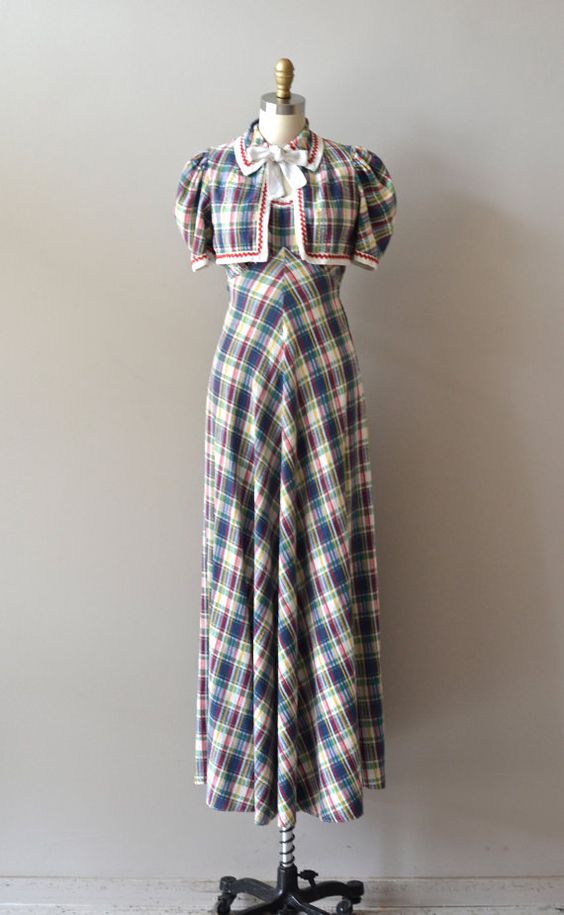 Looking at this charming day dress and bolero from the 1930s it's hard to believe that only 30 years earlier such a simple ensemble would have been out of the question.  We might look at this from our position in the 21st century and perceive it as fussy and old ladyish, but looked at through a broader lens it is a part of the gradual loosening of rules and regulations with regards to how women could dress, that has culminated in our current level of openness.  Now women can wear nearly anything they wish to without drawing negative commentary about it's lack of fitness based on their sex.  A less obvious part of that loosening is the bias cut of the dress itself.  Even in day wear, the bias cut was being used, which makes materials more elastic and mobile. Sure, the lady still had her undergarments to deal with, but even those were significantly lesser and lighter.  This dress is a step on the road towards greater physical freedom. 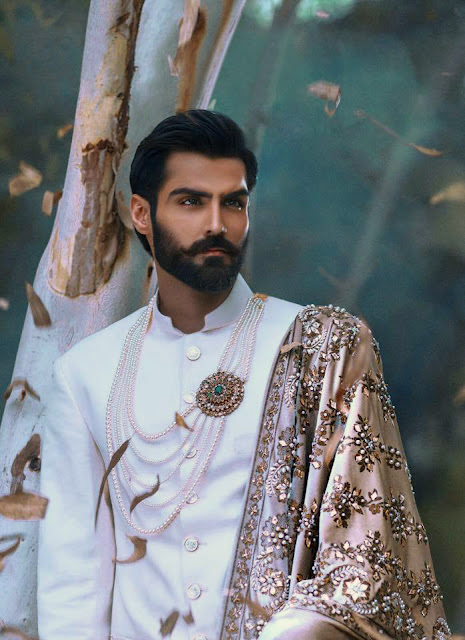 I will never try to deny that I love the shiny.  I do indeed.  And I love the idea of opulence as an option for men finally being reintroduced within the design community. This is, of course, from an Indian designer, where such ideas have never really gone away.  But boy howdy would I love to see this spread to my part of the world.  Maybe I'll just have to start the trend my own self.   I could start with a bead embroidered shawl. Heck I can do the beadwork myself. Hmmmm  And yes, he IS rather lovely. 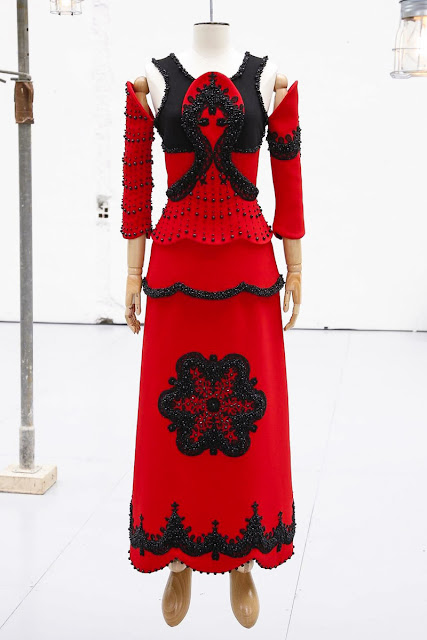 This is from Aquadi Couture.  I find this intriguing because the intense contrast of the black decorative elements on the red material allows us to look at the decorations and see their individual rhythms and composition.  It fascinates me how the parts of a garment contribute to each other and to the final meaning of the entire piece.  Do I think this needs all the parts it has?  No, not really. It seems to have too much going on.  Even structurally the dress has a lot happening.  So does it really require every bit of the detailing?  Editing might not be a bad notion. 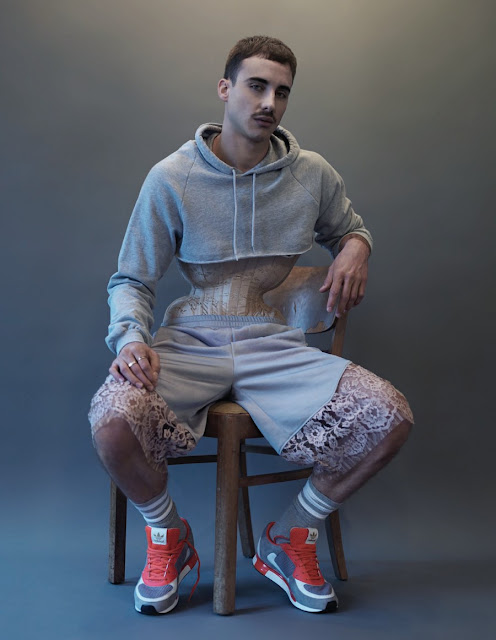 I full on love this image.  For me this is the whole dialog about sexuality and how it manifests in our apparel choices.  It's a commentary on our natures both superficial and buried. It is a single shot look at how we are, as a culture, beginning to come to terms with the actual breadth of the human sexual experience.  And one of the things that I find personally interesting is that years back I might have found this image quite disturbing, now I can look at it and see so much more than my visceral reaction would have permitted.  We do evolve. 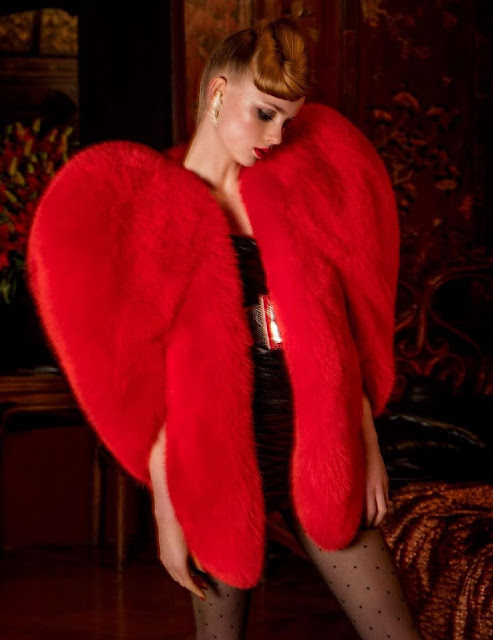 As a clean juxtaposition to the previous image this fashion shot is a complete validation of everything we have created as a perception of what woman ought to be. There is nothing here that challenges our old school concept of frail and fragile woman. But it is, of course that curious fur coat that is somewhere between a heart and labia that turns the model into a depersonalized icon of sex.  I understand that this is a fashion shot, and as such treats with fantasy to a huge degree, but the message conveyed is to say the least a conflicted one, especially these days. 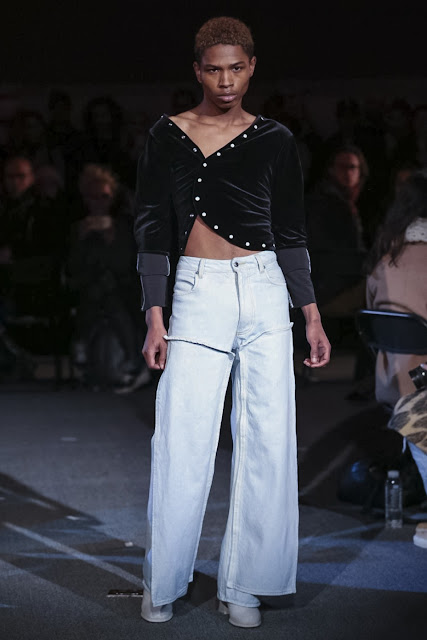 I do have a few bones to pick here.  It's not common for me to wax negative about anything. This is going to be one of those moments.  While I have nothing against experimental and avant garde apparel, I want it to be done well. By that I mean I want it to be constructed effectively in order to present the idea to the best possible effect.  In this case it appears there are multiple things that miss the mark: textile choice, fit, and assembly. The pant fabric appears to be white denim, but it is not handled well, making the side seams lumpy, which might be acceptable in real world terms but is not in runway presentation.  The fit of the top is off, making it look like it shrunk awkwardly in the washer. The choice of a secondary textile for the top does not serve the entire ensemble. It skews proportions again into an odd place.  The shirt would be better realized without the undersleeves.  Your thoughts, folks? 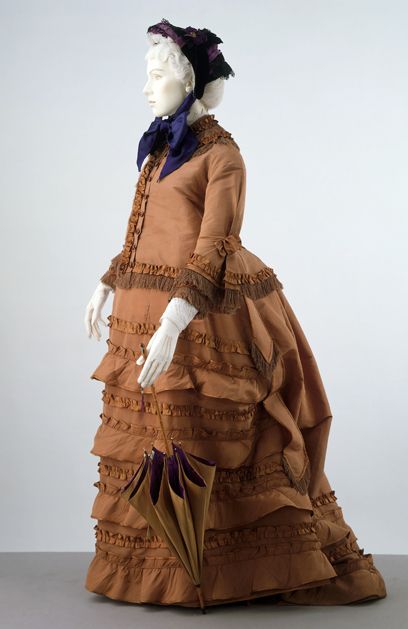 For women of middle and upper means, pregnancy did not mean your round of social calls was to stop until the final weeks before birth.  Nor was a woman permitted to give over the predominating styles simply because she was uncomfortable 24/7.  So with that in mind we end up with ensembles like this one.  Clearly the only nod given to the lady's condition and needs is the loose fit of the waist. Everything else is spot on for a fashionable visiting costume in 1870. Yes, it is true that corsets existed that were designed for pregnancy. They were more like a bra with fairly loose side panels, but they kept all the potentially moving parts from moving, which was the whole point.  The lady would still have worn her bustle and her multiple petticoats.  It must have been hellish.  Mercifully, we don't go there anymore. 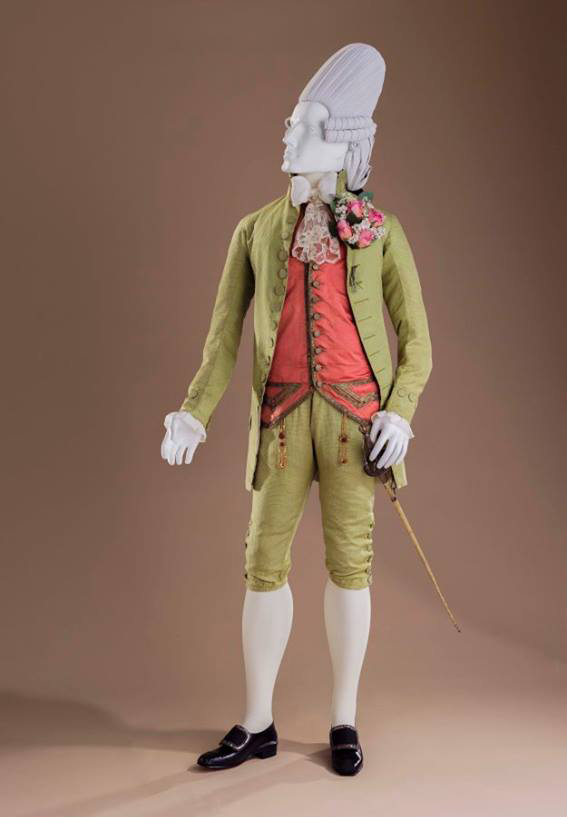 "He stuck a feather in his cap, and called it macaroni."  If you've ever wondered what the heck that was supposed to mean, this is where you get your answer.  A Macaroni was the slang term given to a really over the top dandy in the later 1700s.  This suit is a full on Macaroni suit from 1770, possibly Venetian.  The slightly outre' color choices and the extremely tight fitting throughout are what marks it as different from a normal gentleman's suit of clothes.  Though it is shown with a bow knotted cravat with a lace fall, in reality that bow knot was sometimes quite a bit bigger, and the lace fall longer.  As a final note, the wig used here is in no way an exaggeration of the hair dress that a Macaroni would have sported. 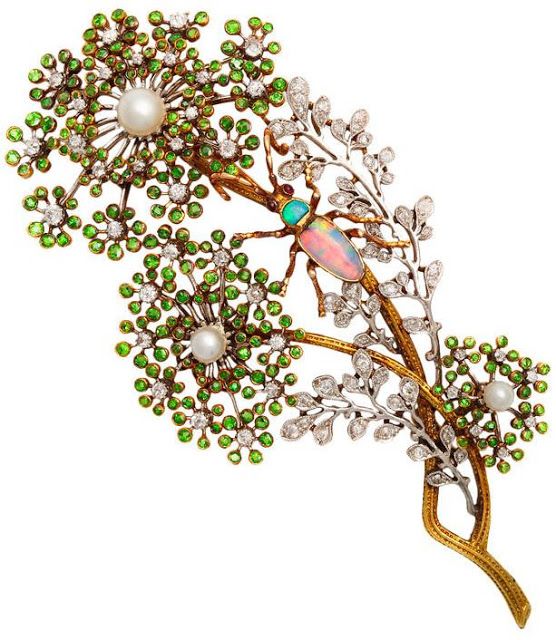 As a final entry this week, a bit of bling.  One of the things I find continually interesting is how we are constantly about mimicking the natural world in some way.  We are forever about taking things we have seen and creating them again in another form.  Jewelry is one of our favorite ways to do this, and this is a perfect expression of that urge.  What is also interesting is that this is so very naturalistic coming from 1870, when the style was much more rigidly formalized.  Made up in rose gold and silver, the floral clusters are citrines with diamonds, and large pearls at the centers, the beetle is made of two opals and has ruby eyes.  It's a glorious piece of work.

That. my friends is that for this week.  Have fun out there in the real world!