Holy Crap, it's July already!  How did this happen?  Well, no matter how quickly the week speeds by, I will not fail in my effort to bring you, weekly a compilation of randomness for your amusement and enlightenment.   Herewith the Scatter for the first week of July 2016. 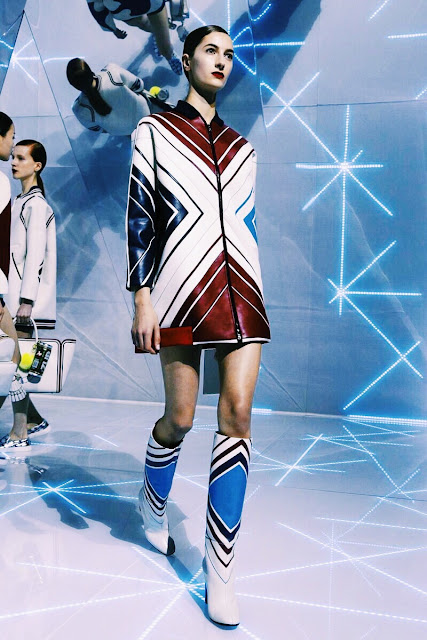 Anya Hindmarch seems to like it architectural.  When I saw this I was instantly struck by how much gets accomplished with how little.  The structure of this coat dress could not be simpler, and yet, what could be bland is nothing but, because of the wise choice of textile, and its perfect deployment.  There is rhythm, energy and even a hinting to the body underneath with the intersecting lines implying the shape within.  It's a great textbook image of what happens to a basic garment when a well trained design eye takes it up and works with it.  Boring becomes amazing. And an Attire word that might have communicated little of interest, now relays something strong. 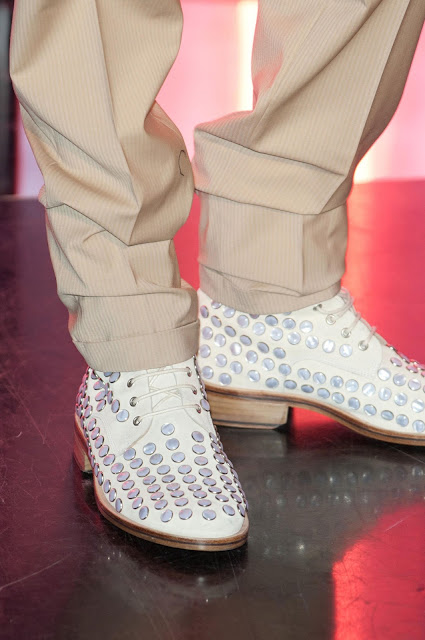 Here is a great example again of what happens to something simple when a keen design eye is trained on it.  This pair of men's shoes is from a Jean Paul Gaultier collection form 2013. What interests me here is that, first of all, men's shoes so rarely get serious embellishment outside of athletic footwear.  So seeing something with applied work is refreshing.  Second, the choice of decoration is both formal, and playful.  Third, and most interesting to me is that this concept is one that could be done as a DIY project quite easily with a plain pair of shoes and some interesting pieces to apply.  Hmmmm. I might just have to experiment myself. 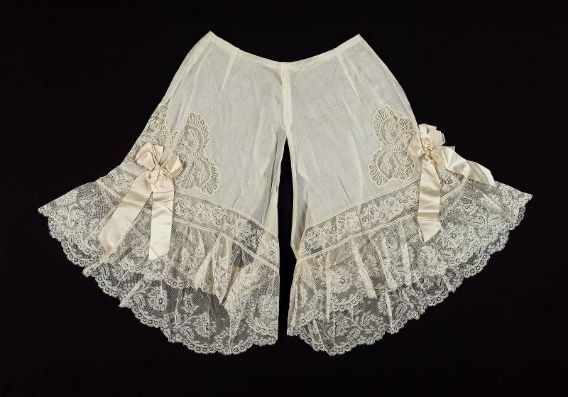 These Parisian frillies are a pair of drawers, made in 1900.  By the time these were made it was no longer deeply shocking to wear bifurcated undergarments, women of all sorts did.  What is of interest to me is that it could be seen as the emergence of pants for women in a nearly literal sense.  Within a few more years forward thinking women, especially those with the wealth and freedom to do so, would start wearing pajamas, and resort gear that included pants.  So first it was out of the question, women wore skirts under their skirts, even as sleep gear.  Then during the mid 1800s, they began wearing pantelettes as underclothing, though they were considered very racy. By 1900, they were commonplace, but still invisible to surface view, with the single exception of bloomers.  And by 1950, they were seen daily all over the place.  A slow steady surfacing from subconscious, to conscious. 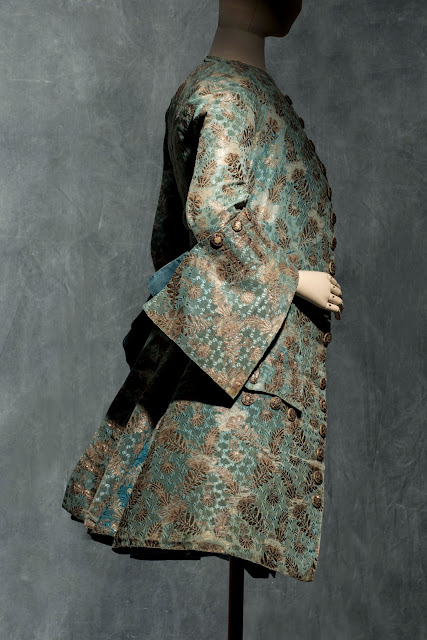 This gentleman's coat made me swoon a little when I saw it.  The textile is glorious, a silver metallic brocaded silk frisee velvet.  The cut of this coat marks it as being from between 1730 and 1740, when a man's coat skirts were still to the knee, had considerable volume to the rear, and cuff that went right to the elbow point.  Sadly, the matching breeches no longer exist, but I can still imagine the entire ensemble together.  The suit would have been worn with a shirt with a long fall of lace, white stockings, and the shows, most likely would have had red heels which were a major fashion at the time.  The lucky gent who owned this was either a man of major means, or extreme debt.  Textiles like this one were immensely expensive. 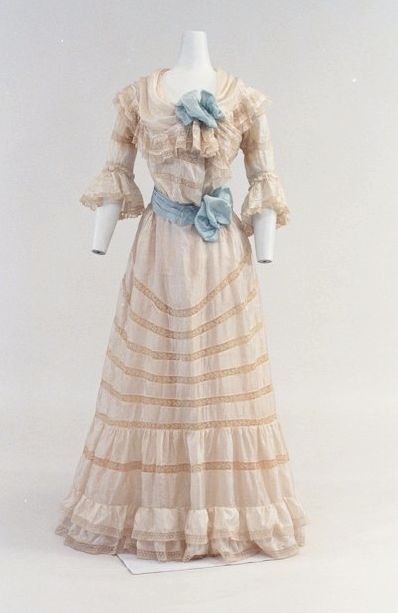 This cotton lawn day dress is from 1905, and it's a masterpiece of hand work. Lawn is a fabric of such lightness and fragility that it must be handled with great care.  Every stitch mark shows, and won't go away if mistakenly sewn. So imagining the time and care it took to create those arcing bands of inserted lace makes my head hurt a bit, and my fingers ache in sympathy.  Such a gown as this would have been reserved for summer exclusively, since the whole dress probably weighs only a few ounces. And caring for it was also an onerous task, since ironing had to be done with great care so as not to scorch the material.  Milady's maid I'm sure never looked forward to tending this. 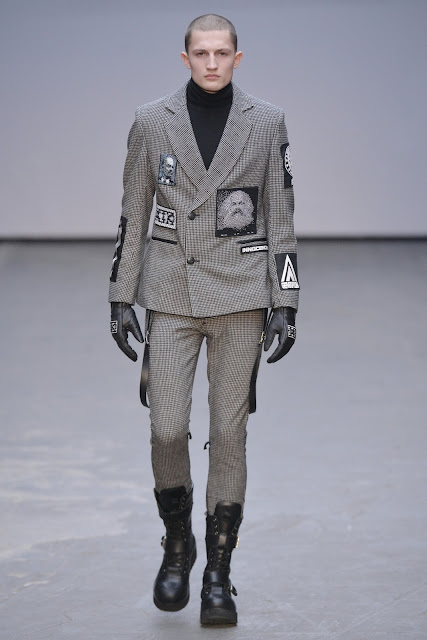 Of late a trend has been around that I have found interesting for what it says about us, and how we want to be perceived by others.  The trend, here presented by KTZ, from 2015 is replete with patches, unified only by color, that are seemingly randomly placed on the frame of the jacket. What I find interesting here is the seeming need we have to advertise ourselves with applied imagery. We are so bombarded with input from every corner of our lives that perhaps it's only natural that we would eventually feel the need to up our game in order to maintain our individuality and relate our interests to others, visually.  In the simplest terms it manifests itself with the current popularity of buttons.  Where I work we carry myriad ones of all sorts that people purchase in bunches to put on hats, backpacks and jackets.  When this peters out, I wonder what will take up the slack, since our culture is hardly getting less frenetic? 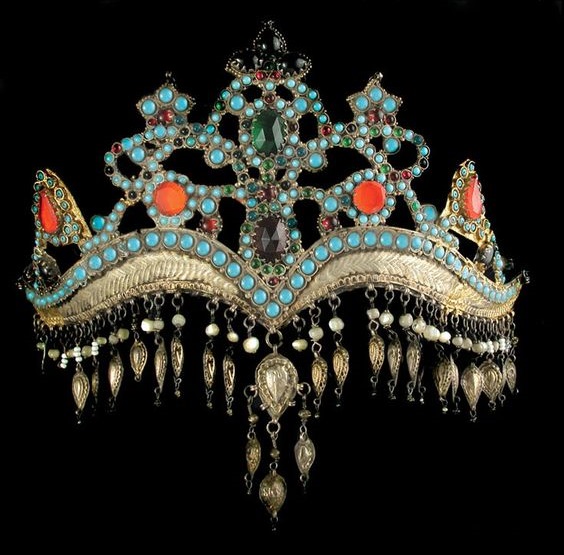 This is an Uzbekistani headdress from the 1890s  I love what it says about our desire to adorn, ennoble, and make ourselves feel important.  And I love too that there is not a culture anywhere on earth that does not utilize the concept of the crown in one form or another.  Whether it's made of hide, feathers and shells, covered over with seed pearls, or made up in precious metals and rare crystalline minerals they exist everywhere and have for all our long history.  Sure, it was an inevitable consequent of our fist sticking leaves in our hair, but that it became a universal is what intrigues me.  So the concept of the crown/headdress is a base term within the Attire language, much like robe, shoe or skirt are. 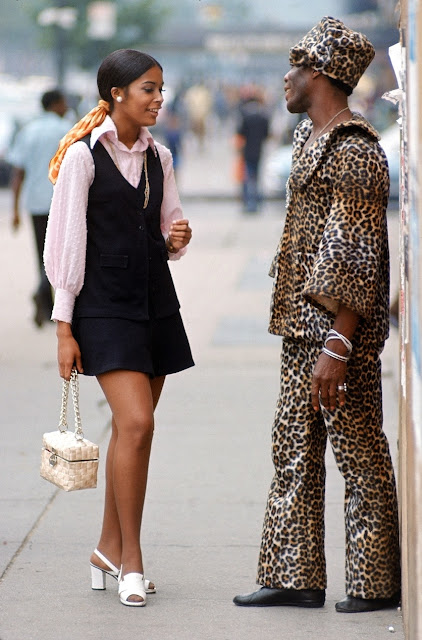 I just flat out love this image for so many reasons.  This is a interesting look at how people choose to view themselves, even within a subculture.  The young woman has chosen to follow the dominant fashion trends, and looks right out of a fashion periodical of the time.  The young man, however has chosen to move in a completely counterculture way, referencing his heritage, but making it cool by the shape of his tunic and pants.  We, each of us, find our own way through the seeming morass of Attire, trying to get to a set of words we feel entirely comfortable using, that express our own uniqueness effectively.  NYC 1969. 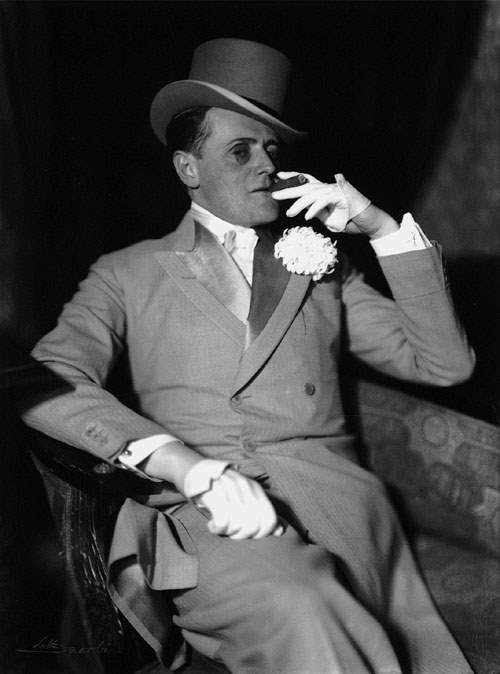 Talk about style!  this is German film star Hans Heinrich von Twardowski who was active in film from 1920 to 1944.  I was simply blown away by his appearance. What I'm not certain of is whether this was his actual style or if this was devised for a film he was in. In either case it is an extraordinarily evocative and expressive set of Attire terms.  Every detail contributes. from the cut of his clothes to the tilt of his hat and the sort of flower in his lapel adds to the message.  Even the way he is wearing his gloves makes a small additional remark.  Wonderful, whether it is costume or real time clothing, just wonderful. 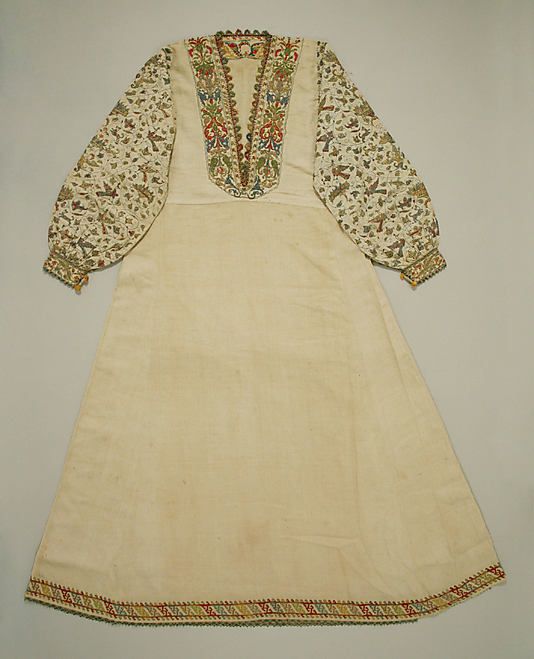 This lovely article is a woman's shirt/chemise from about 1570.  Its survival is probably due to it's having been such an elaborately worked one of its sort.  But it's here to speak to us about how people lived their lives a bit.  Shirts like this from dead plain to highly decorated were a unifying factor of dress for both women and men of every status.  This would have been worn underneath all other clothing, and would often serve as sleep gear.   Much of the extensive embroidery would have been visible to viewers of the lady wearing this. Certainly the gorgeous sleeves would have been on display, either through slits in her oversleeves, or worn fully deployed.  We are lucky indeed that this survives. 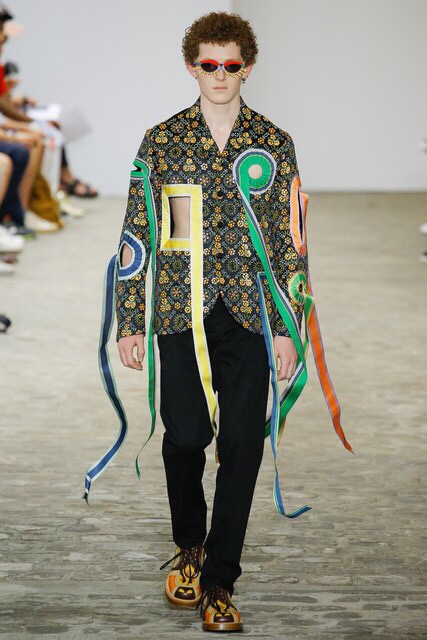 Oh that wacky fellow Walter van Beirendonck.  I must applaud him, ever, for being so willing to take us to new places and try and get us to see things differently, even when those visions are not entirely successful.  As remarkably silly as that coat is, I love its playfulness, and the expert use of the ribbons as they work around the openings.  There is some very fine workmanship on display here,r regardless of the final outcome.  Also, there are ideas here that could translate to real world use.  Could we see coats with bordered cut outs?  Sure we could. And I do like the notion of putting random and unusual areas of the body out there for a look see.  (Also I want those shoes). 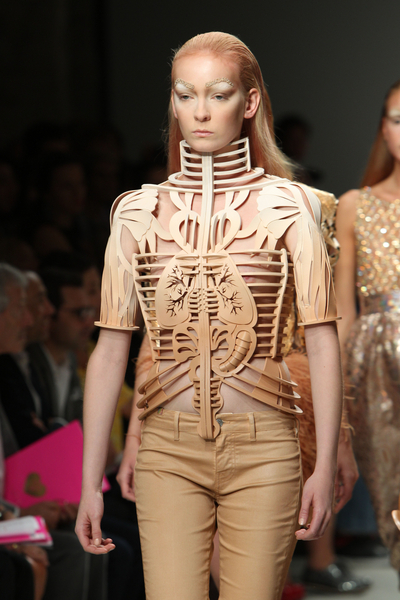 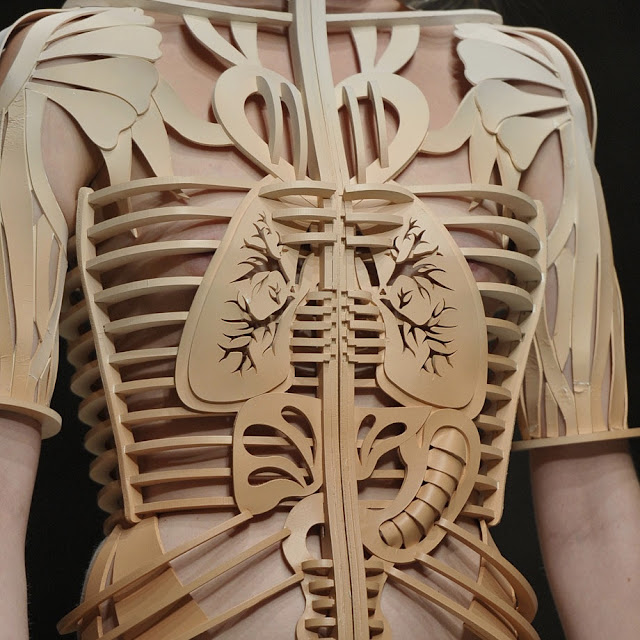 I'm finishing this week's Scatter with something rather challenging.  Manish Arora typically creates clothing for women that is lovely and readily understandable.  This statement piece from the S/S 2014 collection is no less easily understood. Its impact is profound, calling to attention the reality of what we are, by bringing our interior outwards and making of it a kind of armor. Perhaps that is the thing that makes this so potent a piece of work. It implies that our internal selves, (and not just our viscera), are indeed our strength and protection.  And yes, in case you were wondering, the cuirass was entirely 3D printed.  Amazing, disturbing, and provocative.

That's that for this week, my friends!  Have fun out there!