Well, it's been a very interesting week for me.  The facebook version of Attire's mind has seen a massive surge in readership that has had a 2/3 increase over the prior week. I could not be more thrilled.  But nothing, not even that will deter me from delivering your weekly romp of randomness known as Scattertime.   So here we go! 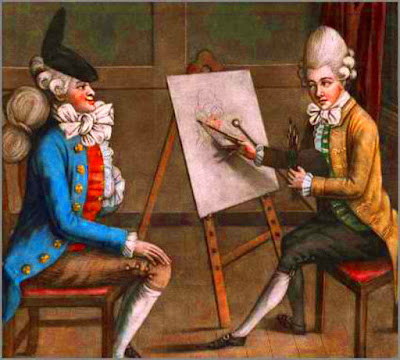 Let's begin with a lampoon, shall we? This cartoon from the very later 1700s is meant to satirize the extremity of the fashions the young fops were getting up in, even after the rise of Republicanism in Europe.  Though it was no longer safe, or fashionable to wear lavishly embroidered clothes made of fabulously precious silk brocades, extremes still occurred, as they always do. What makes this even more interesting is that the gentleman on the right is dressed in the reality of what fashionable attire was to look like, so we get a greater view of the over the top nature of the sitter on the left. What is a universal is this, that no matter the time or the place, extremes of Attire expression always emerge. Whether those extremes are meant for ritual usage, or are merely an outward manifestation of a desire for notice is not my point, that it is a global human phenomenon is. 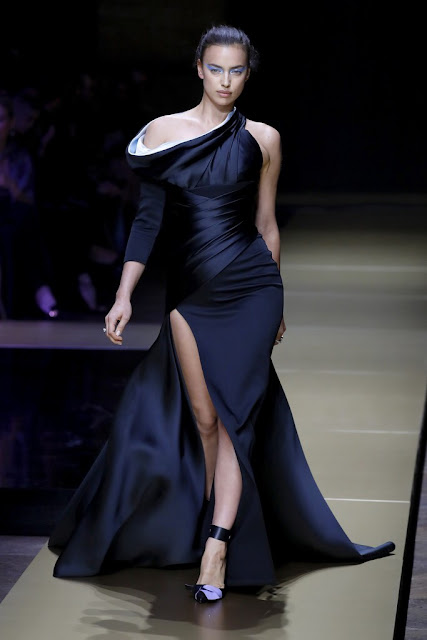 Editing. We hear a lot about editing from fashion journalists and other media. What does it mean in broader terms for the Attire language? It means, frankly, knowing when to stop talking.  A statement made is best when it uses only the elements essential to it's full completion as a coherent thought.  Whenever additional concepts are inserted it becomes more difficult for the observer to comprehend what is being relayed.  Here we have a good example.  This is a superlatively constructed garment, its fit and cut are ideal.  There are however one or two aspects that dilute rather than enhance the message.  All of the visual balance is pulled to one side.  The draped collar, sleeve, angled draping of the bodice, and the skirt slit are all on one half of the design.  The skewing impact of that is diminished here by the angle we are seeing it from, but faced square on this would seem to be sinking off the model.  What, if anything, disturbs your perception of this gown? 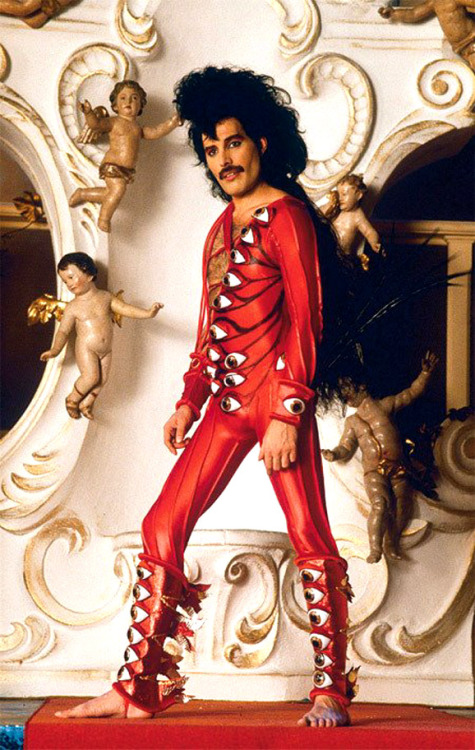 Freddie, Freddie, Freddie.  My, the things you get yourself up in. Of course this outfit is meant for large scale stage performance, and as such in a special category of the Attire language, essentially a dialect that has many different rules, and some different aims from the mainline of the parlance.  The requirements of theater mean that small visual gestures and details will be lost. it must be broad strokes and bold colors to be able to be read from the back of an amphitheater while lighting effects are blazing away.  It gives designers an opportunity to express wild fantasies that would be otherwise impossible. And it gives the wearer equal license to be more outrageous, more free, more creative in movement and expression.  We could most of us do with a dose of this kind of visual outrage. 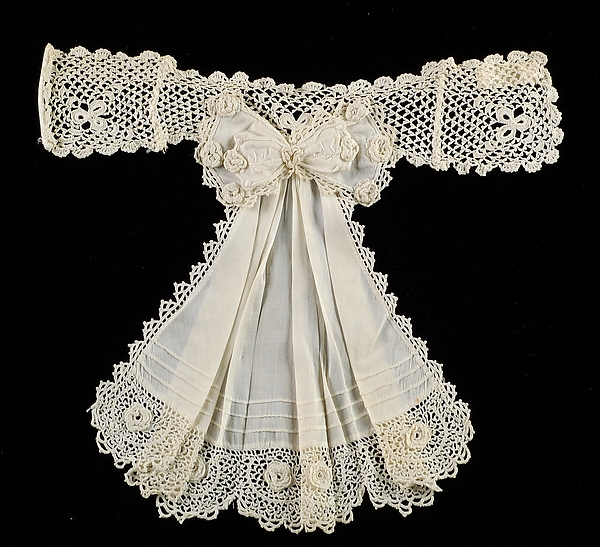 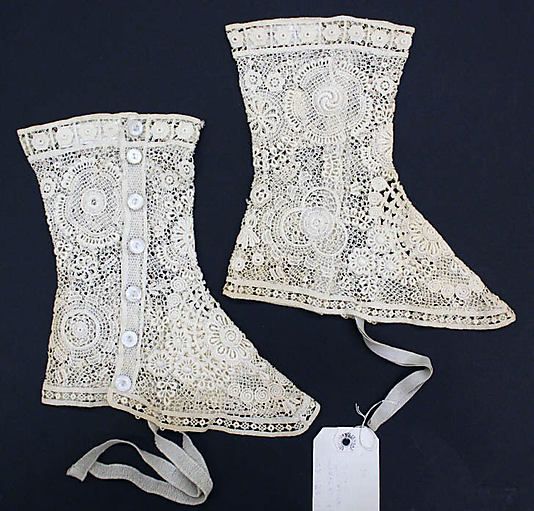 Lace.  From it's first emergence in the 1500s as a supreme luxury, to the computer controlled production of lace yardage today that rivals handwork in it's complexity and finish,  lace has always had a very special position in our culture.  Its fragility instantly places it into rarefied territory since it cannot survive vigorous use.  With that in mind it has become culturally associated with our wrongheaded notions of the fragility of women.  It's one of the reasons that getting men into lace in our current society is so tough, it has that subtext that connects to the feminine.  For your information, the jabot is a home made article from 1900, with hand crocheted lace.  The spats are from the 1910s. 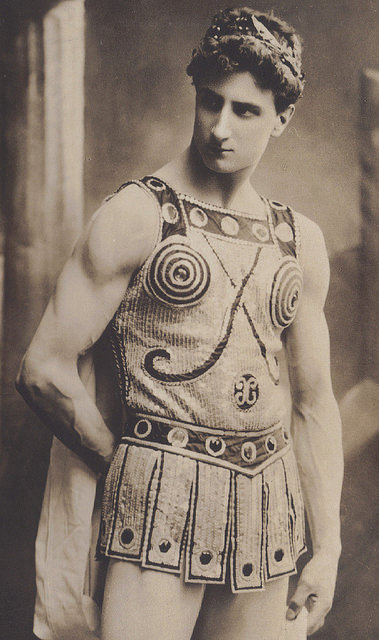 This rather astounding looking fellow is Sylvester Schaffer who was a life long circus performer and vaudevillian. Coming from a family of celebrated circus performers, he was highly skilled at multiple different forms within the circus panoply.  So wide were his varied abilities that when he debuted his new vaudeville act in New York in August of 1914 he performed ten completely different acts, by himself, setting a record on the Vaudeville circuit and worldwide.  But we're here to look at his cunning little ensemble.  As I said with the Freddie Mercury entry costume for stage has different needs and rules.  In the case of this costume it needed to create the impression of being Roman styled armor without any loss of flexibility or movement.  So, it is clearly made up in some kind of knitted material with the needed decorative elements done in cording and embroidery.  While it does ape the idea of Roman armor, some of the decorations, in particular the discs on the chest, are unfortunate in their design and placement.  The concentric circles there look more amazonian than is quite right, but doubtless when seen in constant motion as it would have been, and that from a distance it might very well have worked. Any way you slice it though, he was a dish. 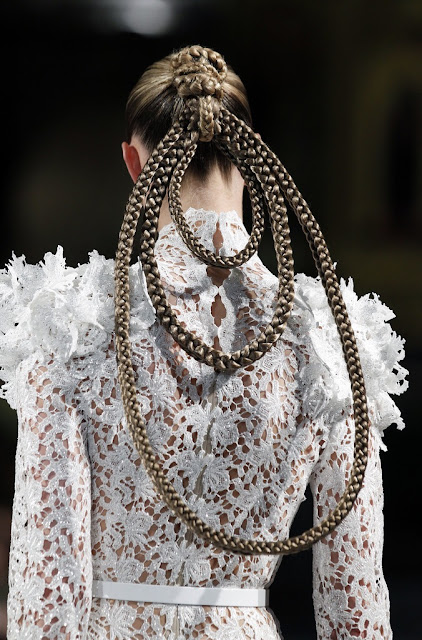 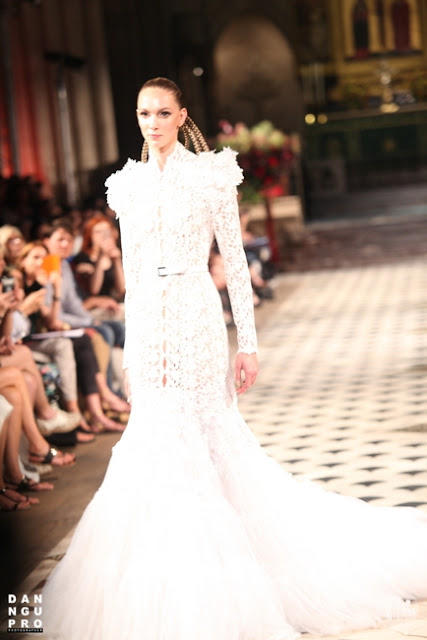 These days a couture runway is as much a theatrical performance as it is a display of apparel selections for potential order and purchase.  This detail image is from a recent Eymeric Francois collection.  The choice here has been to reference older regional styles of European hair dress and blow them up to great scale. The danger with any of these sorts of notions is that they have the potential to overwhelm the clothes worn, detracting from the final point which is sales.  Here, the balance between dramatic effect and clothing worn has been kept in place.  It is a notion which actually translates well into our everyday usage of Attire.  Keeping that one dramatic element in proper proportion to everything else going on is essential to our ability to convey what we wish to with clarity. Allow one thing to become too much of a focus and it ceases to be about us, or anything we wish to say, and becomes all about that one thing, pulling the focus from us. 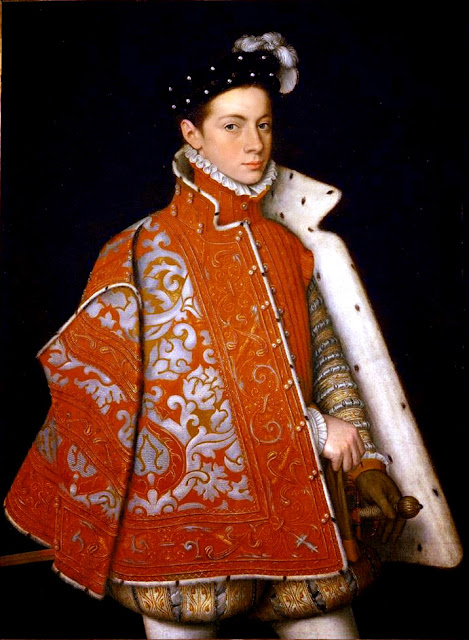 This is Alexandre Farnese who was Duke of Parma as painted by Sofonsiba Anguissola in 1561.  What is of interest here is how very rigid clothing was at the time, in fact it was not only that the textiles were less fluid in general but that that sense of formality and firm structure was an essential player in conveying to others one's status.  Clothing, especially that of the wealthy and titled was not meant to be comfortable, it was meant to loudly proclaim that person's significance and sway.  This ensemble, which may not even actually have existed as you see here, (additions and subtractions were commonly made by artists based on the sitter's wishes), is all about being impressively formal and luxurious.  All the important markers are there; silk textiles costly embroideries, jewels, precious metals, and furs, and all in service of making sure the viewer is certain that this clearly quite young man is a man of great importance.  Also, I want that coat. 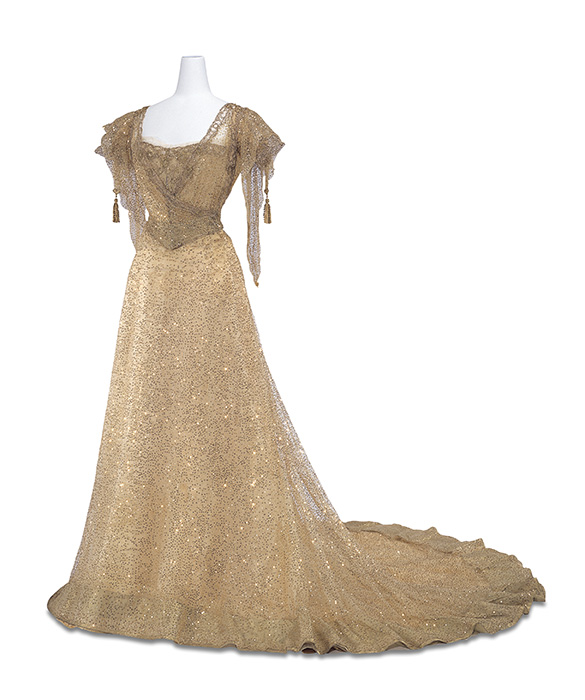 This remarkably serene and simple looking evening dress of 1908 was owned and worn by Queen consort Alexandra who was wife to Edward VII of England.  I say simple and serene because during this period it was not that common for an evening dress to have a skirt that seemed so unornamented. Of course, it is coated with metal sequins, but the overall effect is of simplicity.  All the decorative mass is on the bodice, and most especially at the shoulders. The psychology of this is astute.  The eye would be drawn instantly to the face of the wearer. It is a gloriously well designed and crafted gown, with perfect proportions, and ideally selected details. 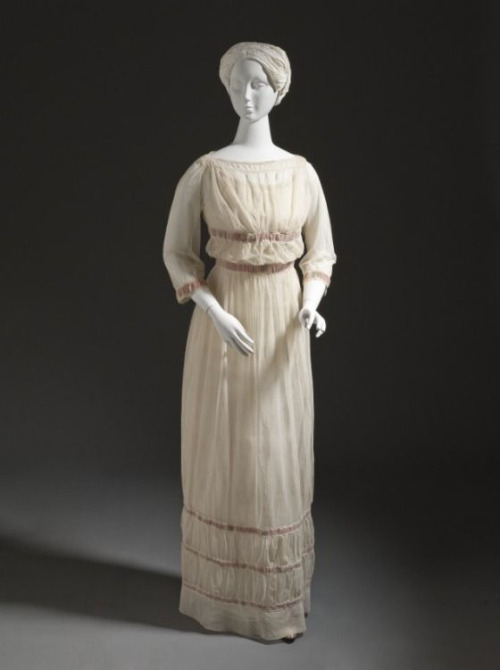 Two years later, in 1910, Paul Poiret would design this afternoon dress which is a startling departure from the trained and often fussy day clothing that was the norm.  His revolutionary ideas of form and function, freeing women from needless restriction is evident here.  Nothing about this garment is design ed hinder movement.  The bodice is fully cut, the sleeves are neither too tight or too loose, and the breadth of the skirt is great enough to allow for free strides when walking.  Though when he first appeared in the design world only the most advanced of dressers chose his work, but his ideas were significant, and soon his notions permeated the fashionable world. Women and their needs were changing. He saw it and stepped up to help them out. 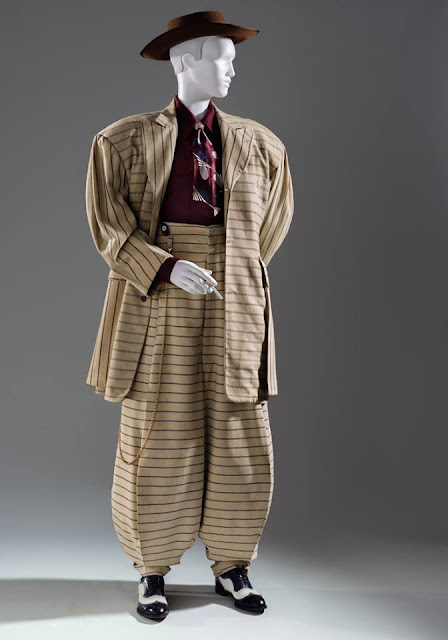 The Zoot Suit is one of the most extreme menswear concepts of the 20th century. coming into popularity during the second world war, and continuing shortly after it was meant at first as a deliberate slap in the face against wartime privation. It was an act of visual defiance that meant that the young man wearing it was more interested in music and fun than in the progress of the war effort. So, though we associate this manner of dress with big band loving, swing dancing lads, it had its darker aspect.  This example is one of the only known complete zoot suits in existence, and it's part of the collection of the Los Angeles County Museum of Art. 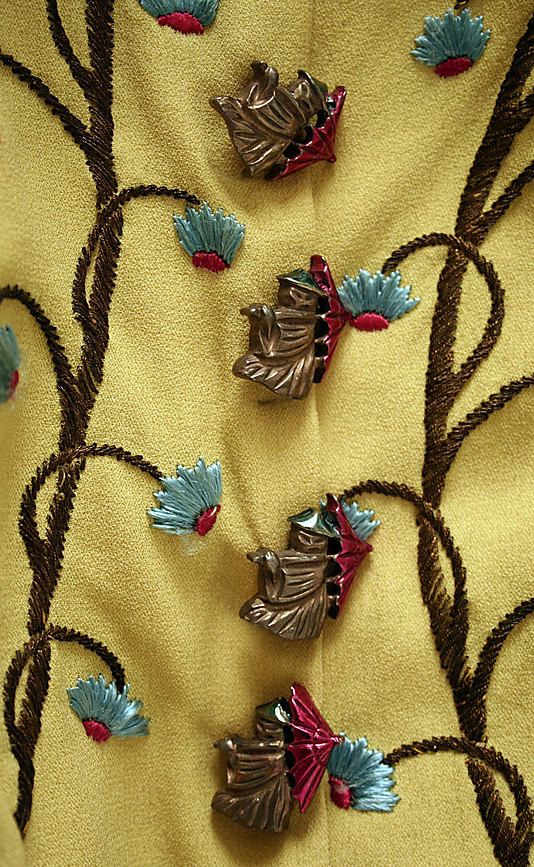 One of the things that marked out an Elsa Schiaparelli creation was here use of unique, often custom created buttons.  They could be in the form of anything from seashells, to comets, beetles. Anything was possible within the mostly surrealist world that she worked in as a designer.  These are tiny Chinese men carrying parasols. Each one is hand carved and painted, as you can make out when you look at them closely, since they each have subtle differences.  The majority of her suits and coats bore such individualistic buttons. Often they were for appearance sake alone, since the garment might actually close with concealed snaps.  This is one of those times.  Such irregular buttons would be difficult to use, and could damage the fabric as well. 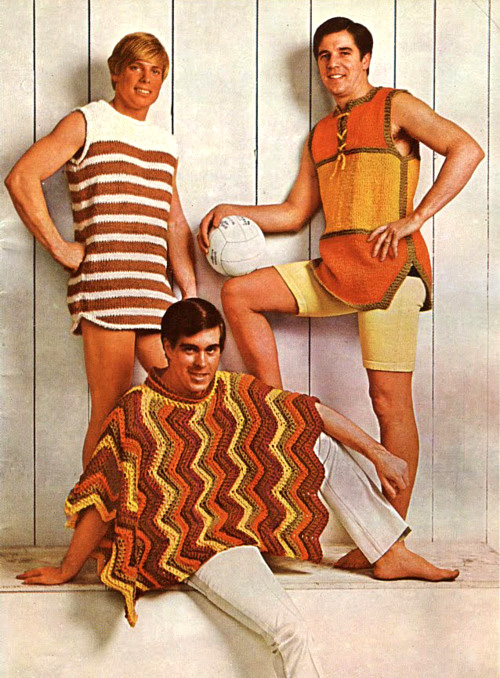 Oh my goodness me, the 70s and our mercifully short lived obsession with making everything under the sun out of acrylic yarns.  As a final entry this week, something to make you smile, and itch.  Who wouldn't want a hand knitted beach cover up made from heavy acrylic yarn?  Come on now. You know you would.  I'm sure there are only a few possible thoughts going through the minds of these models. "I'm getting paid for this." "Geez, I hope no one sees this catalog." "Sheesh this thing is hot and scratchy."  We endure a great deal for fashion's sake, don't we?

Well that's all folks for this week. I hope you enjoyed yourselves!  Have a grand weekend.