Not very long after we learned to stitch hides to each other and begin to make felted and woven cloth, we started to take the other elements we used for adornment, and attach them to cloth and leather. 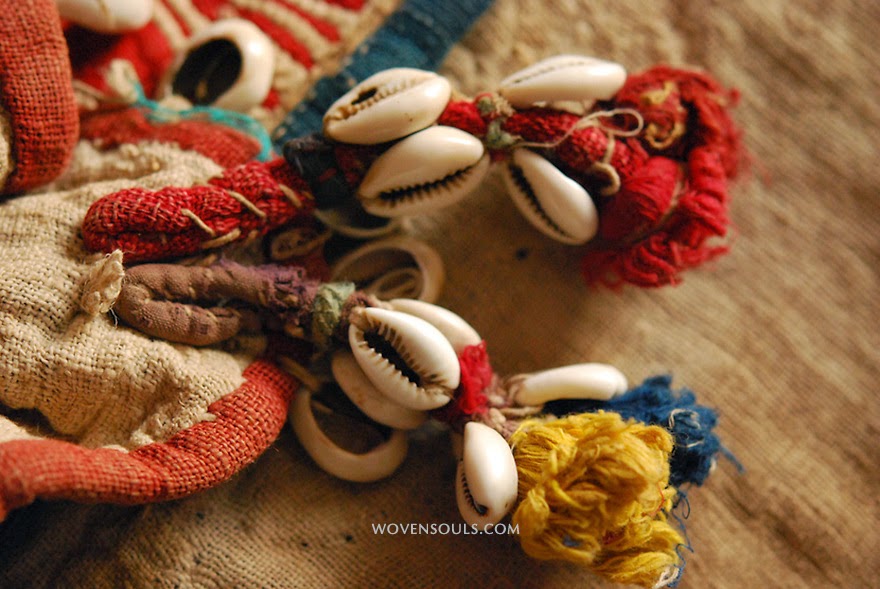 In short order a whole broad range of textile embellishment began, which has only grown wider and more expressive as time, materials and techniques have provided.  The process and art of fabric embellishment and embroidery is very nearly as old as textiles themselves.  Since we started with simple things like using the threads and sinews we had to put hides together to do so in a more interesting decorative way, we quickly moved forward, adding as I said, shells, feathers, scraps of fur, seeds and even leaves to our clothes. 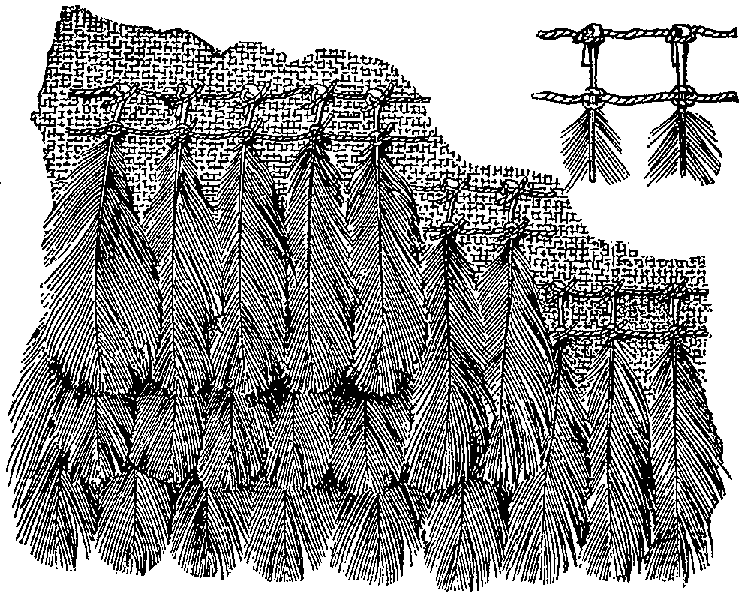 And so we moved along, and things kept getting more interesting and complex.  We added pieces of metal, glass and glazed clay to the process as soon as technology allowed.  And once we figured out how to make metal flexible, either by running it as extremely thin wire, or by winding a narrow strip of it around a thread core, we started working with a technique that continues to this day.
The first image here is of the cope of the Order of the Golden Fleece. Its Flemish, and from the mid-15th century. Its an astonishing piece of work, elaborately done in gold metal and silks.  The second image is a close up of what is called bullion work, where the gold is made into a tightly coiled spiral, which is cut as needed, and held down with stitches that run through it, holding all the gold onto the surface of the fabric. 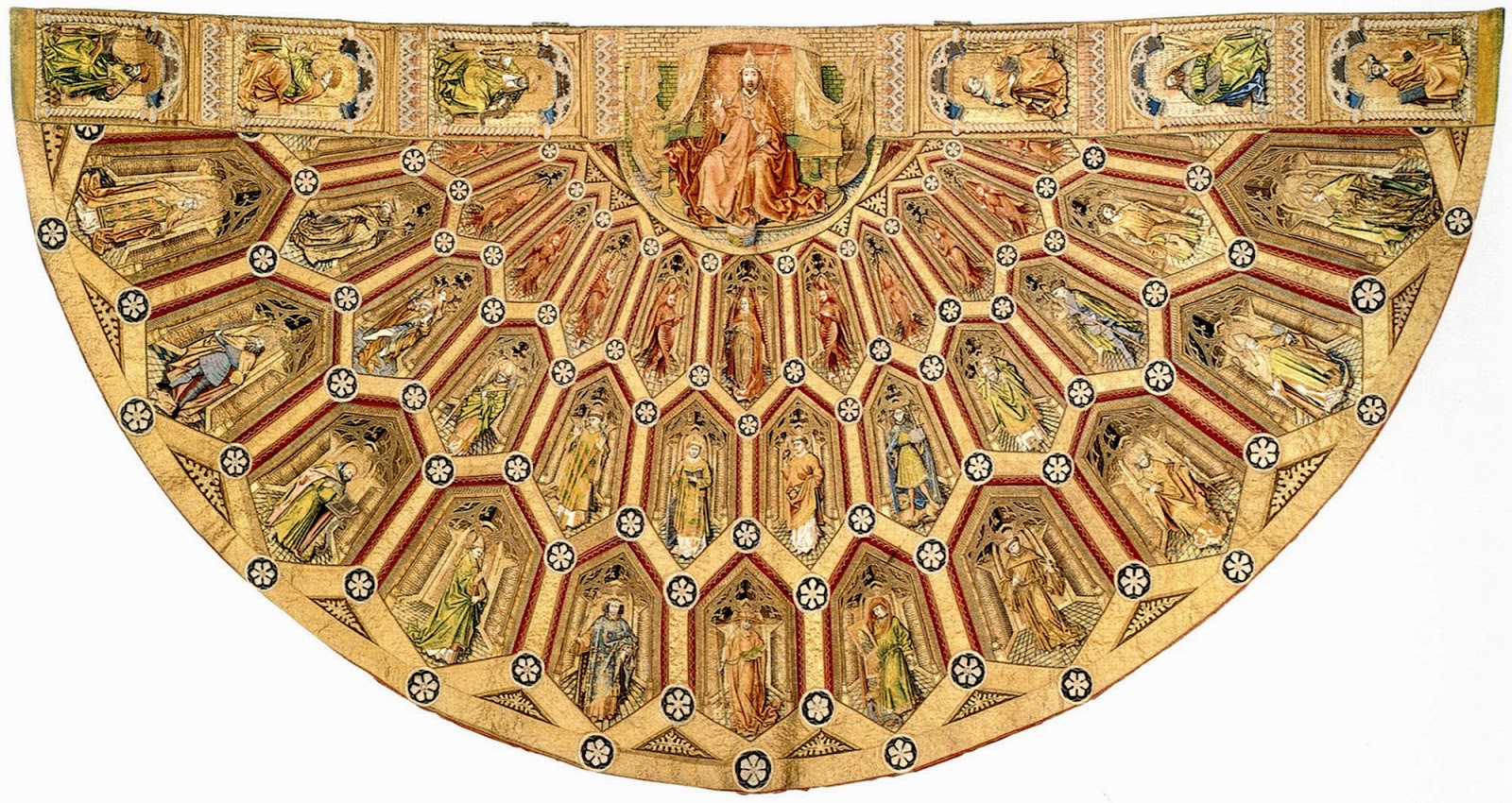 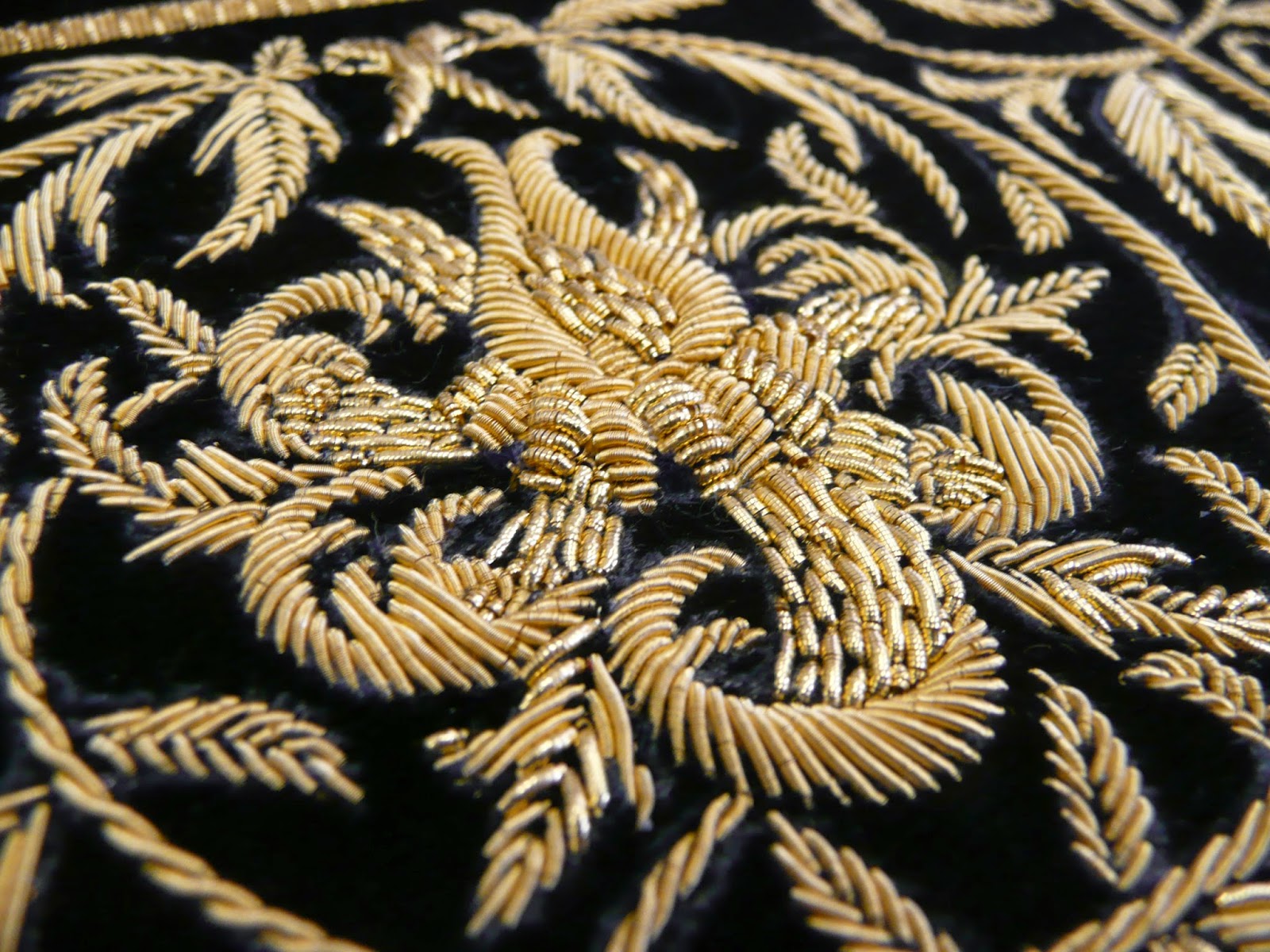 Such extravagant work was of course the province of only the wealthy and powerful, for a very long time.  But as the modern world crept into being, things began to change and the variety and quality of embroidered goods began to spread.  By the 1700s, even those in the rising middle class could afford clothes with embroidered elements on them.  Men's and some women's garments were being made from textiles that were embroidered in advance, allowing the buyer to select from various styles, and then take the worked textiles to a seamstress or tailor to be made up as they liked. 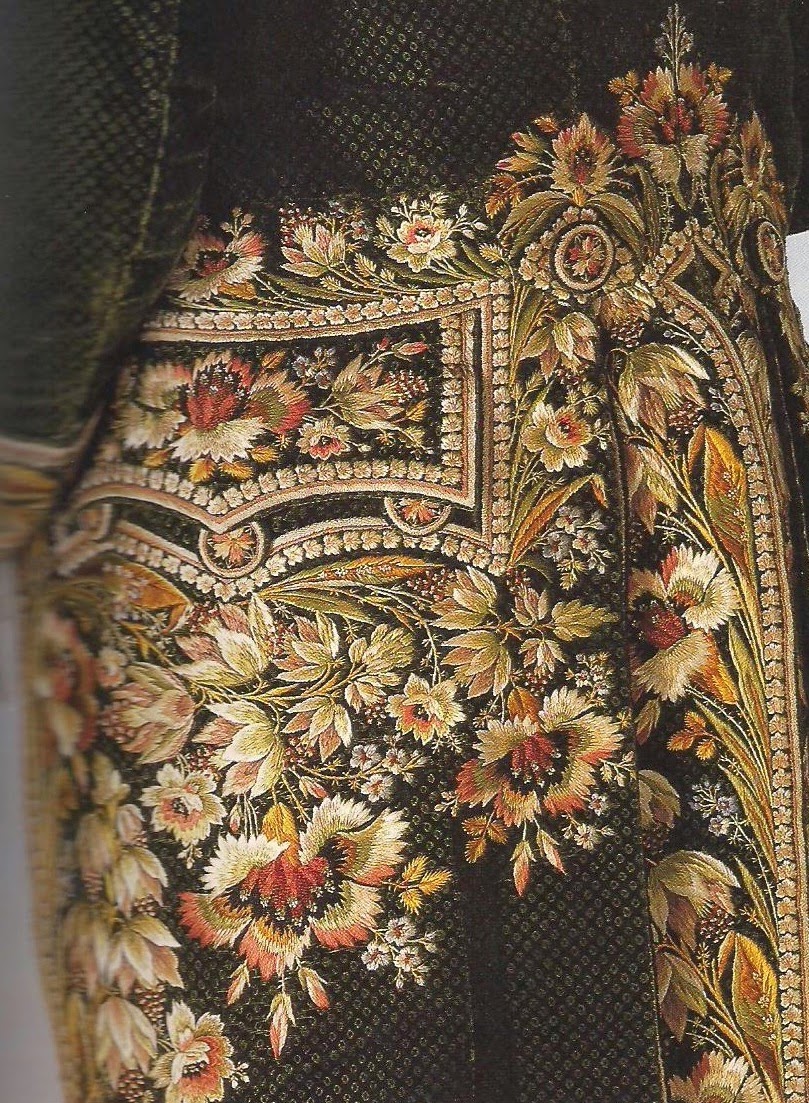 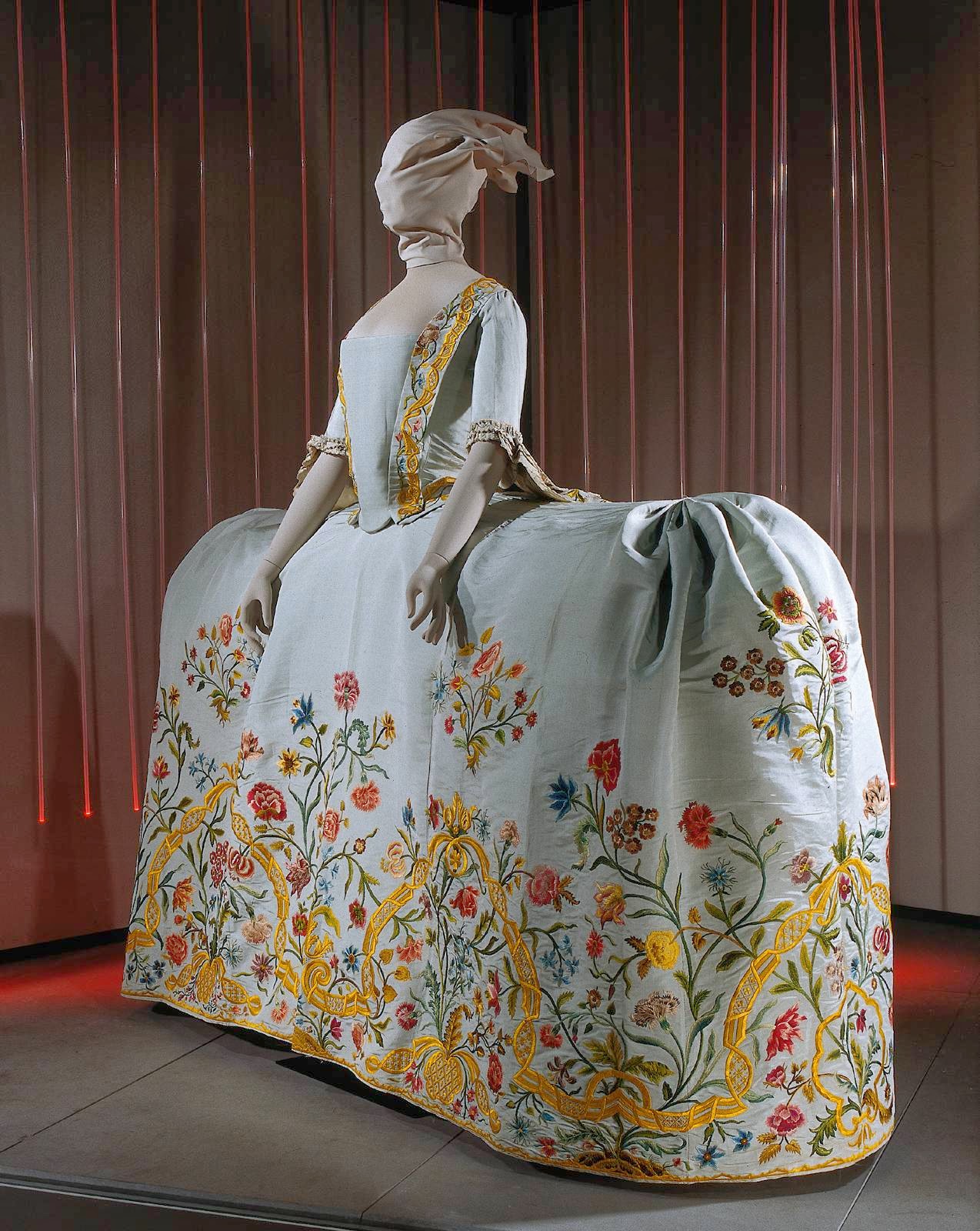 The most important advance that helped this process along was the development of the tambour method of embroidering.  In this technique, the material to be worked on is placed face down in a  stretcher frame. One hand holding either the thread or the already strung beads or sequins is held beneath the frame. The other hand, holding what looks like a very fine crochet hook stays above.  using the hook the fabric is pierced from above, the thread below is caught in the hook and brought up to the top, and then the hook descends again, creating a chain stitch which holds the work in position. 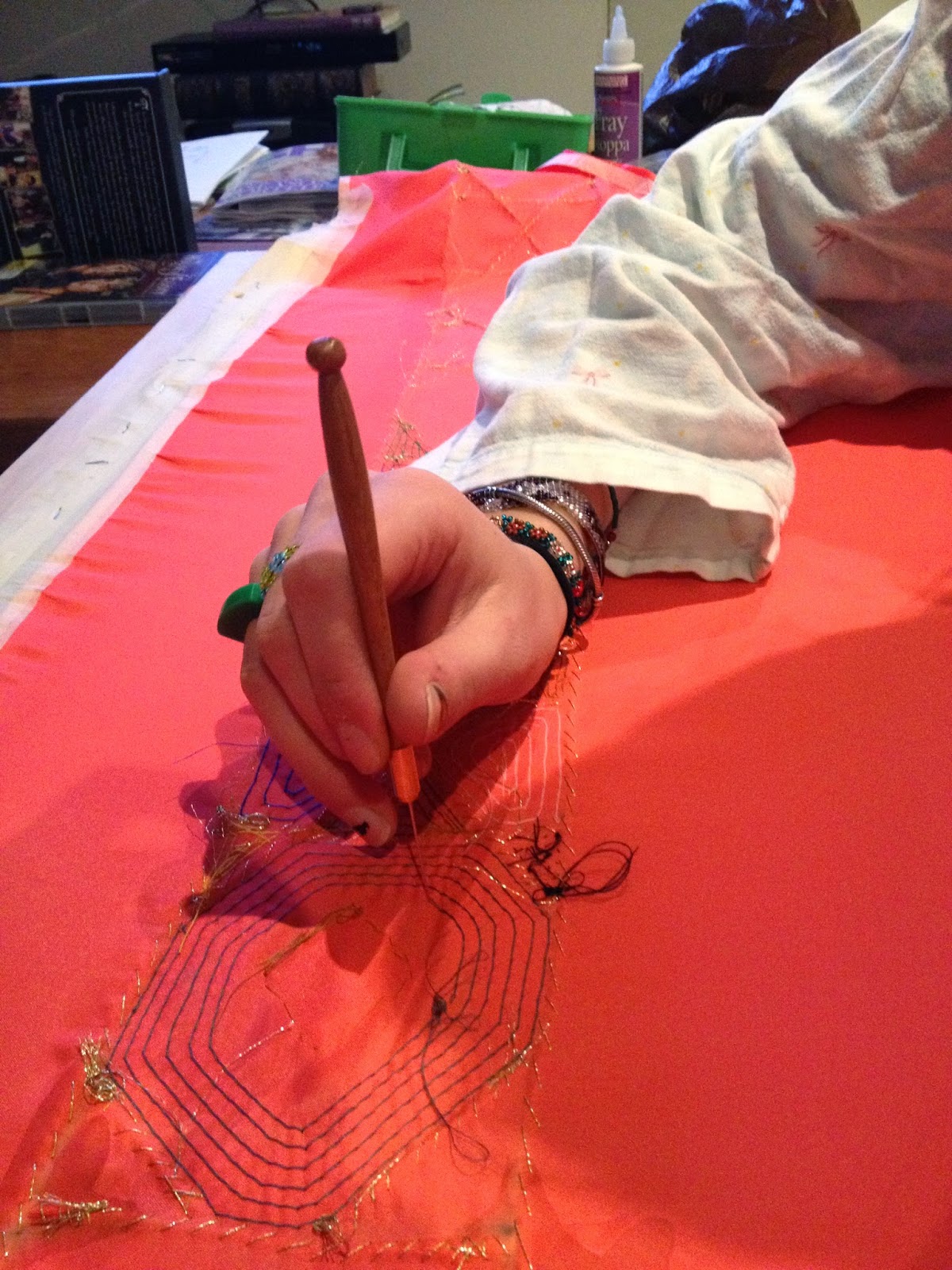 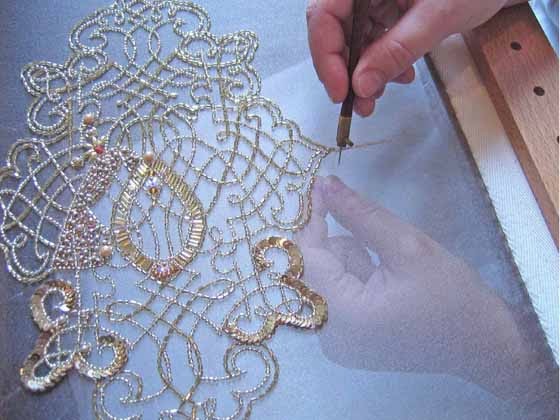 The chief improvement with tambour work was speed.  Far more could be done in less time by a single person.  The downside?  Stability.  If the thread breaks during wearing a whole line of work is lost.
After the introduction of tambour work, surface decoration reached higher and higher levels of sophistication and inventiveness decade after decade; and now with even newer materials and techniques to hand it continues to do so. 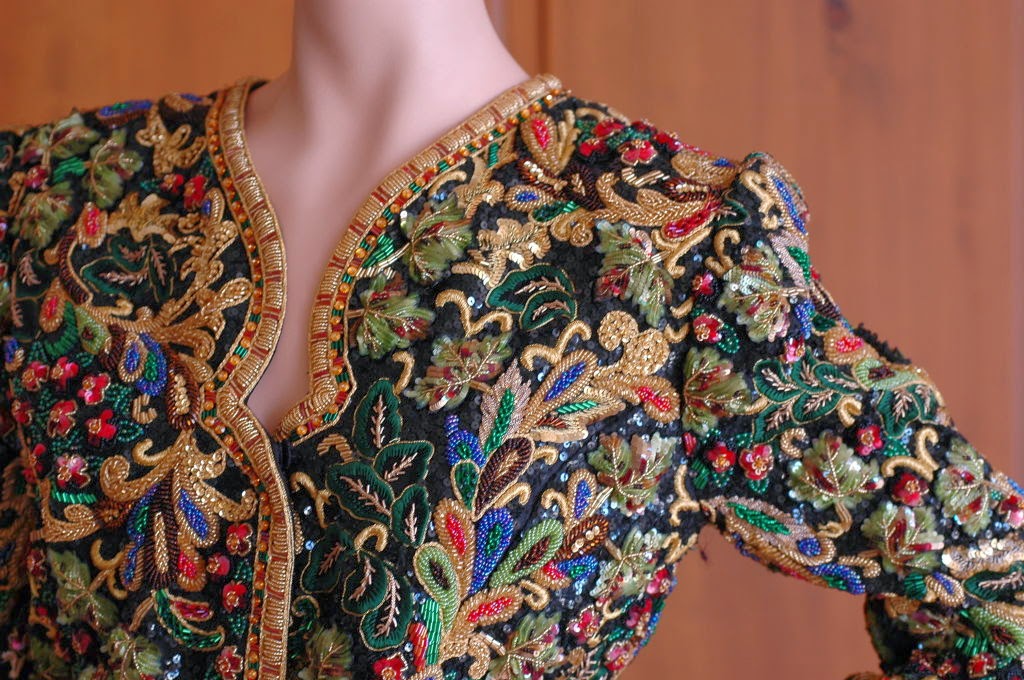 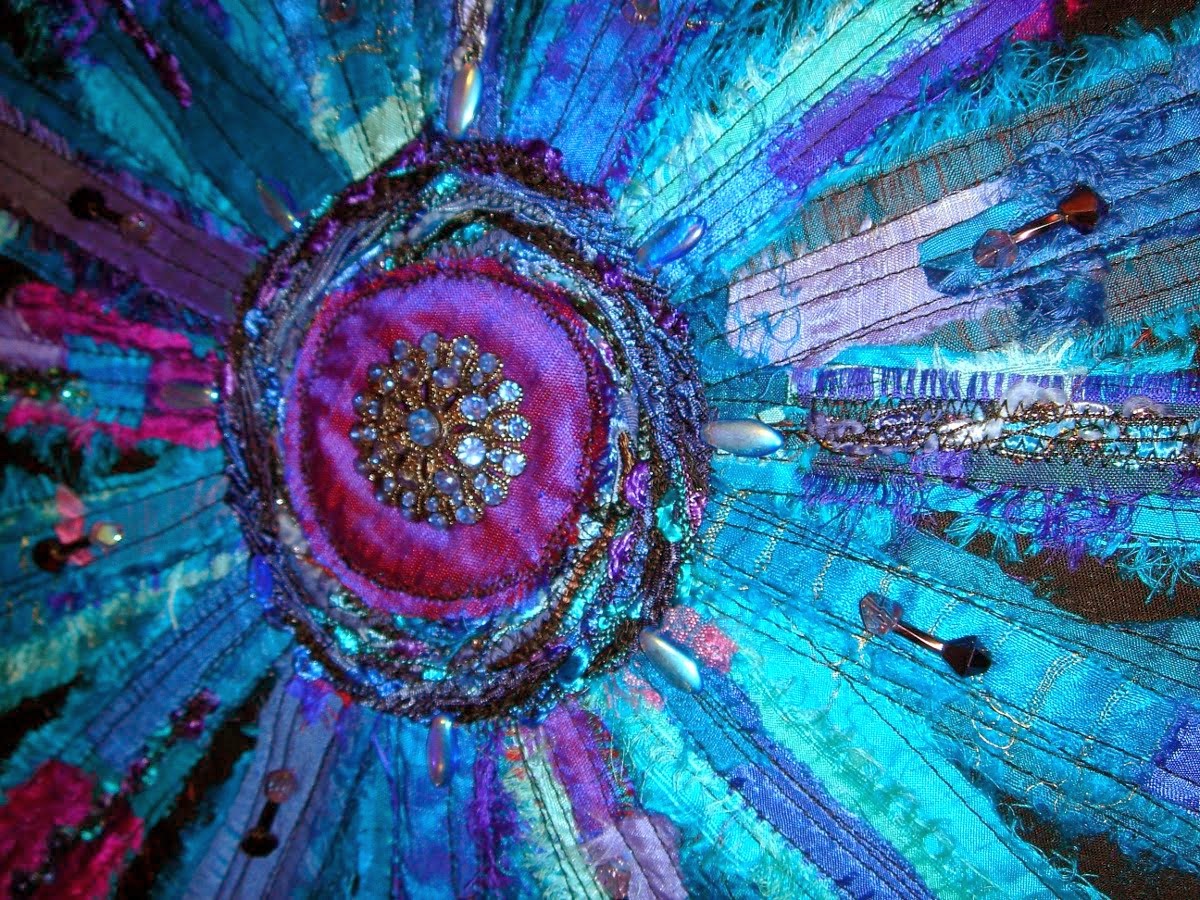 Having entered a new century, bringing with it new developments, robotics stands ready to broaden the availability of embellished goods even further. These textiles below are all done entirely by machine, creating surface effects that just a decade ago would have required hand labor to produce.  In fact the sequined skirt you are seeing is a DIY project.  So screen goddess glam is now within the reach of home sewers. 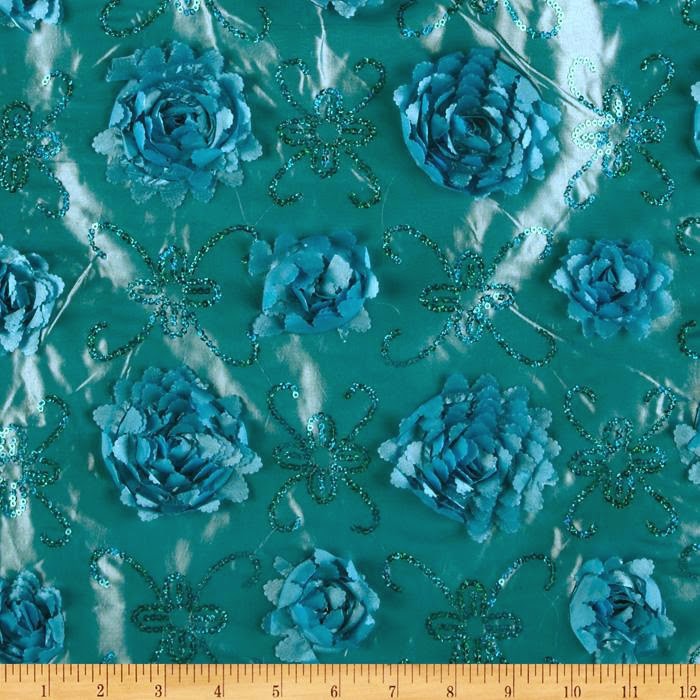 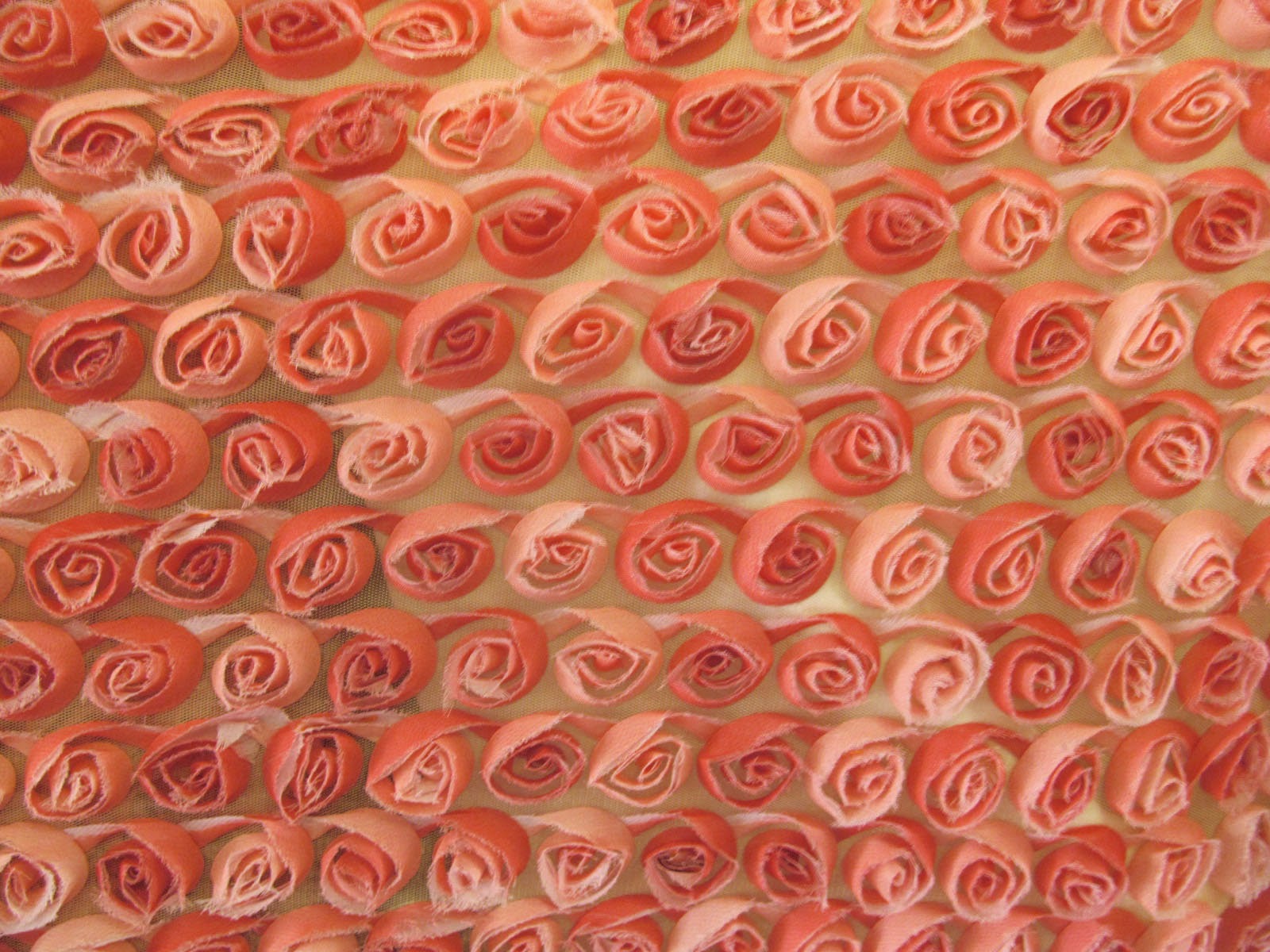 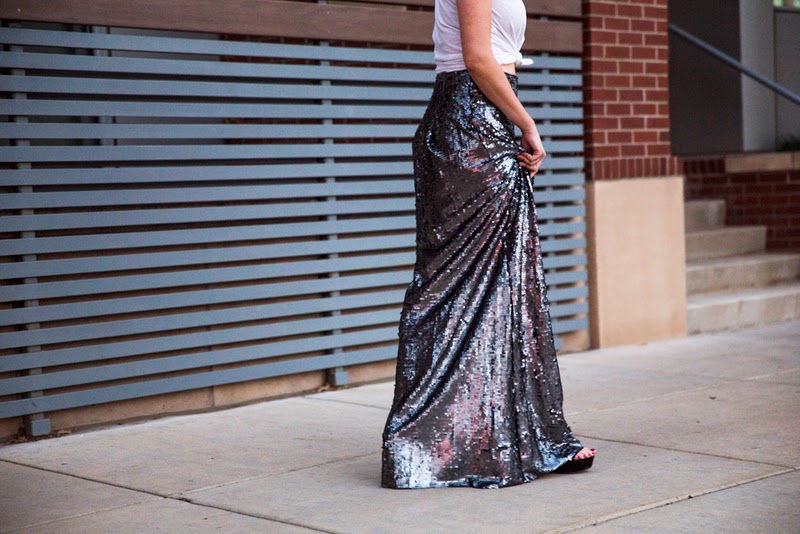 The amazing breadth of expressive work that can be accomplished with thread, metal, plastic, glass, and clay continues to spread out, as artists and designers investigate the possibilities.  What we are left with is a truly dazzling fluid art form that a person can wear. We have discovered yet another way to deepen the ability of our attire to convey something profound about us, with the help of tiny bits and scraps.
And as robotics continues to get more facility, we will be able to go even further still.  I so look forward to the possibilities.