That we live in an age where there is a gaping disconnect between our standards for physical perfection, and the reality of the range of the human body's proportions, and requirements for health is no news whatever; and I don't plan to address that.  What I want to delve into is why and how this happened, and continues to get more extreme.
Over the span of human recorded history, the ideal body shape has varied wildly, not only through time, but from culture to culture. 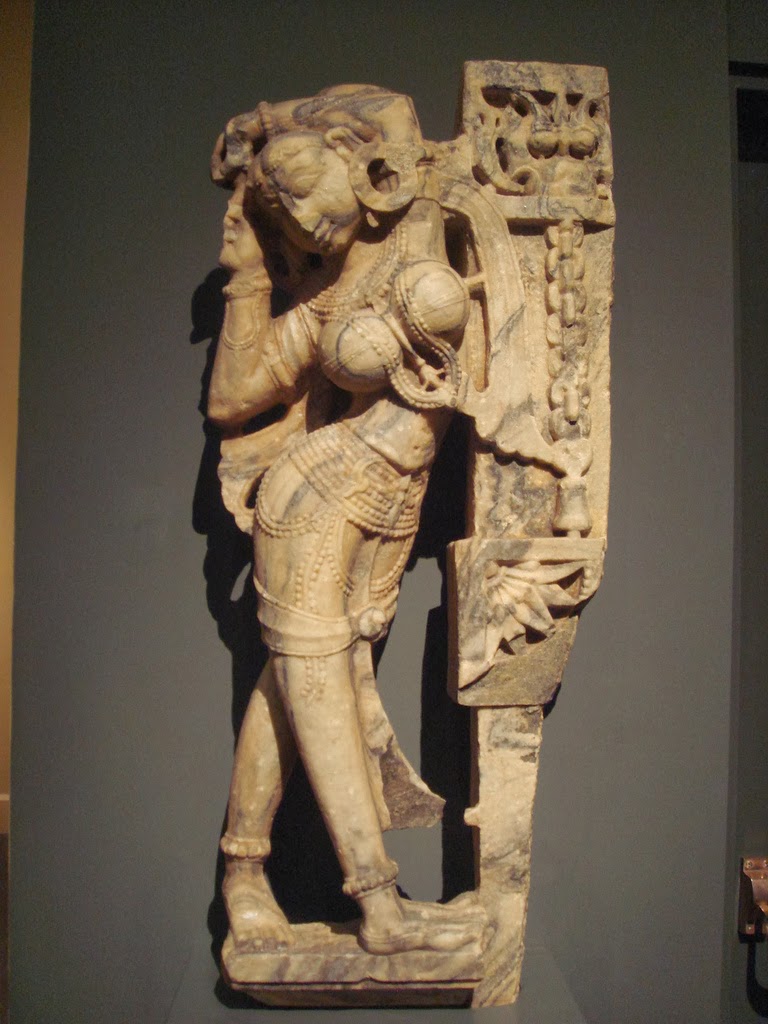 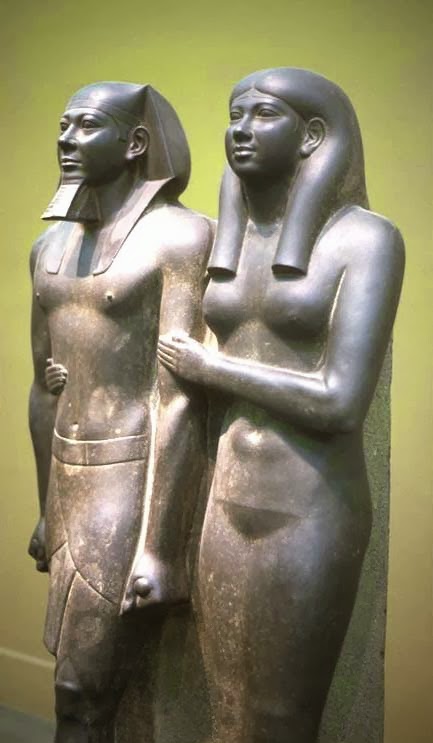 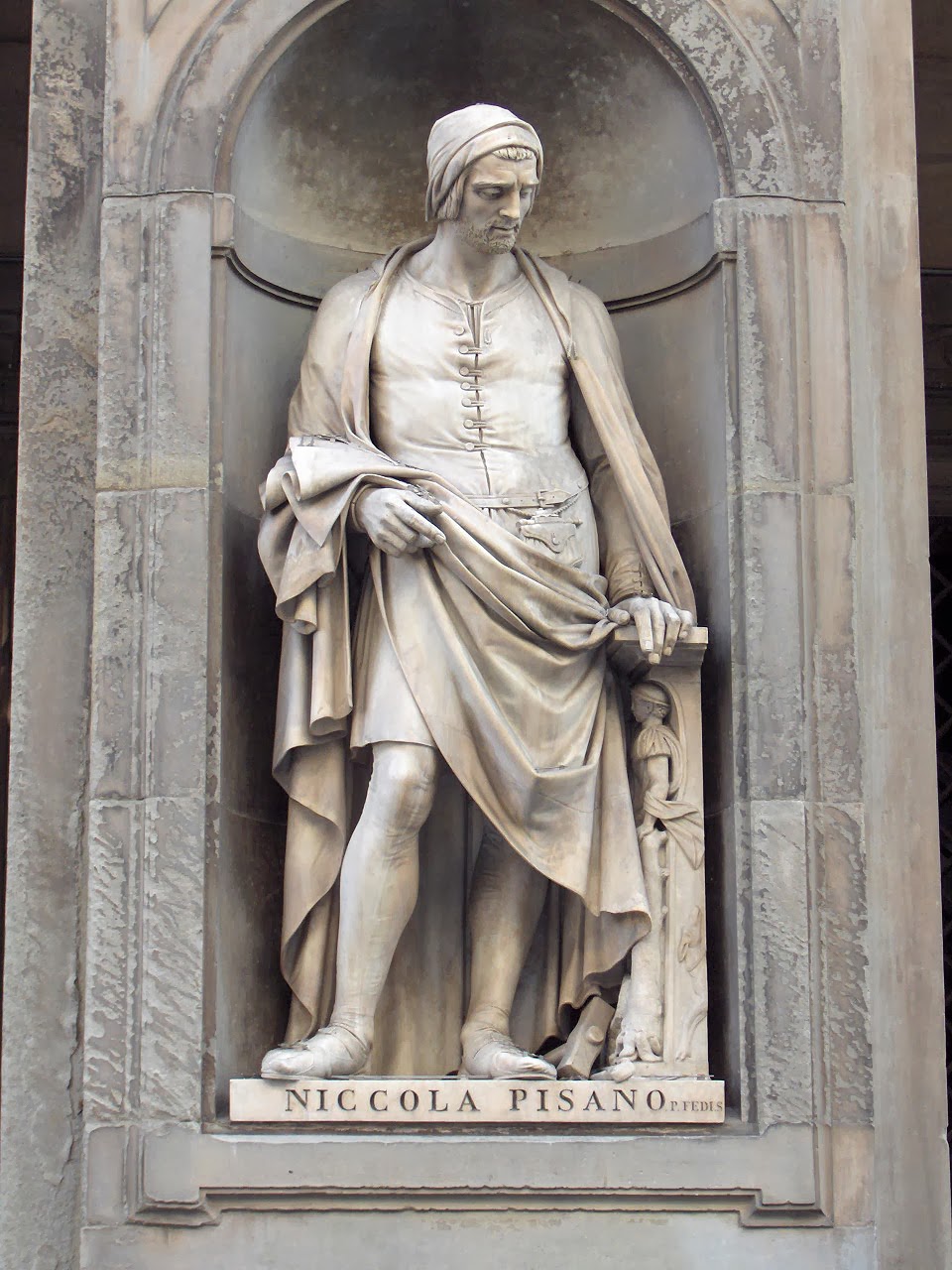 But somewhere around the time of the invention of the corset that ideal began to skew further and further from the functional reality of the human shape, and because we currently live in a dominantly patriarchal culture, the more profound effects were not felt by men, but by women.

From that time, a woman's shape began to be manipulated away from its natural dimensions, through wildly tall heeled or platformed shoes, and a tight constriction of the waist.
Now, I have a notion about the why of corsets, or rather whys. First it was an obvious method of both physical and psychological confinement, keeping women incapable of full use of their own bodies.  The second, deeper meaning is that by compressing the waist artificially the hips become visually more pronounced, implying to the observer that this woman is a child bearer, and of course, that that is her right state of being.  And this second deeper reason is one that scrolls back so far in our history as a species as to nearly have hard wired status.  When procreation, and the furtherance of the human race was a prime concern, physical characteristics like ample breasts and broadly drawn hips were as good an indicator as we had at the time that a woman was fertile.  Men under observation needed physical strength and obvious vigor, and in particular this has translated nearly universally in art to narrow hips, broad shoulders, and a high round butt. 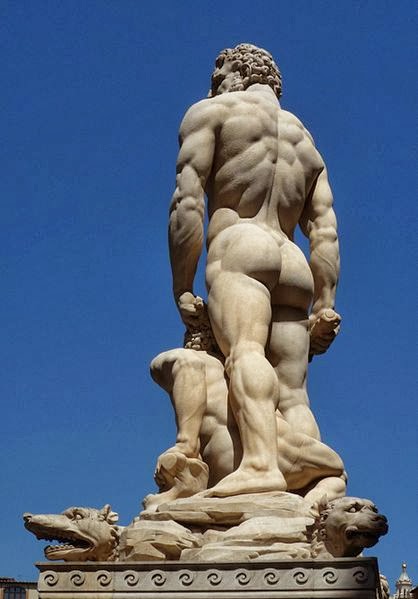 But it was not till the early 20th century that things changed in a way that has manifested finally in the irrational state of affairs we live with today.  In the 20's we saw the beginnings of the youth culture that would change how we viewed ourselves. It was the first time that as a group, the young were effecting the dominant culture.  And this cultural focus on youth as being desirable over maturity began to change how we viewed beauty. Slimness was actively sought, and for the first time ever, women were going to health clubs and dieting to achieve the right reed-like slenderness. 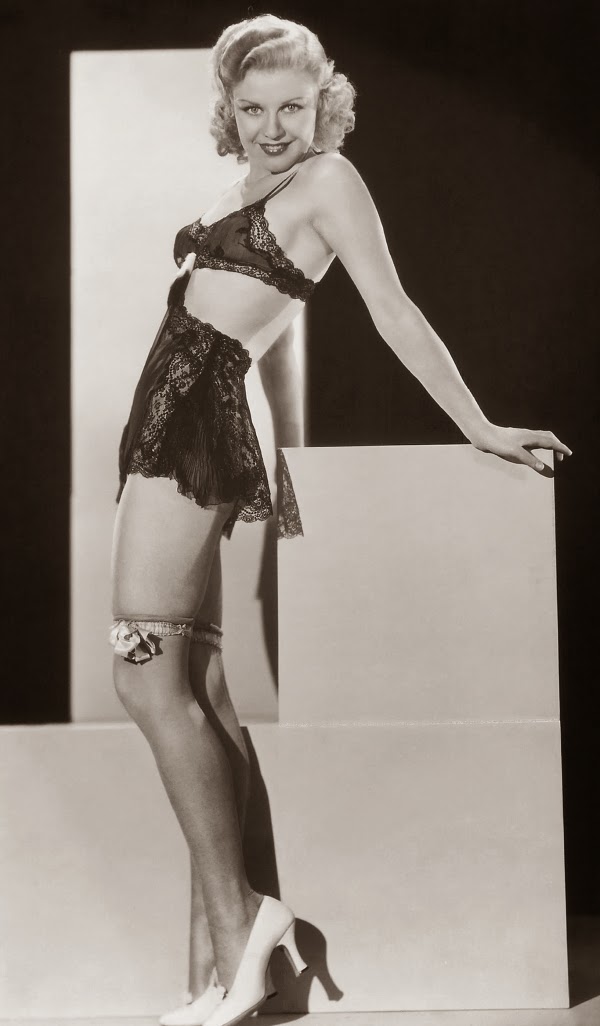 It would take decades, in fact not until the 60s, before the shift would take seemingly complete hold of our culture.  Idols like the model Twiggy, and the arrogantly sexy Mick Jagger, were emblems of that shift.  Since then we have not really let go of this notion.  In fact it has only deepened and broadened.
As we have moved further along, and technologies have permitted all manner of alterations to us to be done, the ideal has reached a point now where only the most diligent and heroic measures can achieve the goal.  Apart from those fortunate few who possess the genetics to get there with minimal effort, the rest of us must face extremes of diet, relentless hours of exercise, and possibly surgical changes, if we wish to pursue this dream.  Even those lovely stars we revere wear spanks under their clothes and slather their faces with makeup to create a level of perfection even they do not possess.
Now, why is this so?  To my mind its because of another one of those hard wired pieces of us. We have an unending desire to manipulate our environment and ourselves, if for no other reason than because we can.  Throughout our history as a species, there has never been a time when a notion has occurred to us, no matter how foolish or wrongheaded, that we have not striven to achieve. And when coupled with our also innate desire always to step a little further, this inevitably results in a furtherance of the ideal of beauty.  Our boundless need to move forward and express in real time our wildest fantasies finally results in a collapse of that fantasy when technology can take us no further.
So we end up having a cultural meme about attractiveness for women and men that is out of whack. Both sides of the aisle are expected to maintain a level of body fat that is not entirely healthy, and to do whatever they may to stave off the appearance of onrushing maturity.
To finish up, for now, since this subject bears further discussion, I leave you with these images.
These are all professional athletes, and to that end they are all in prime condition for their sport.  But nearly none of these highly trained people fits what we believe to be beautiful as a cultural norm.
It certainly gives me reason to think. 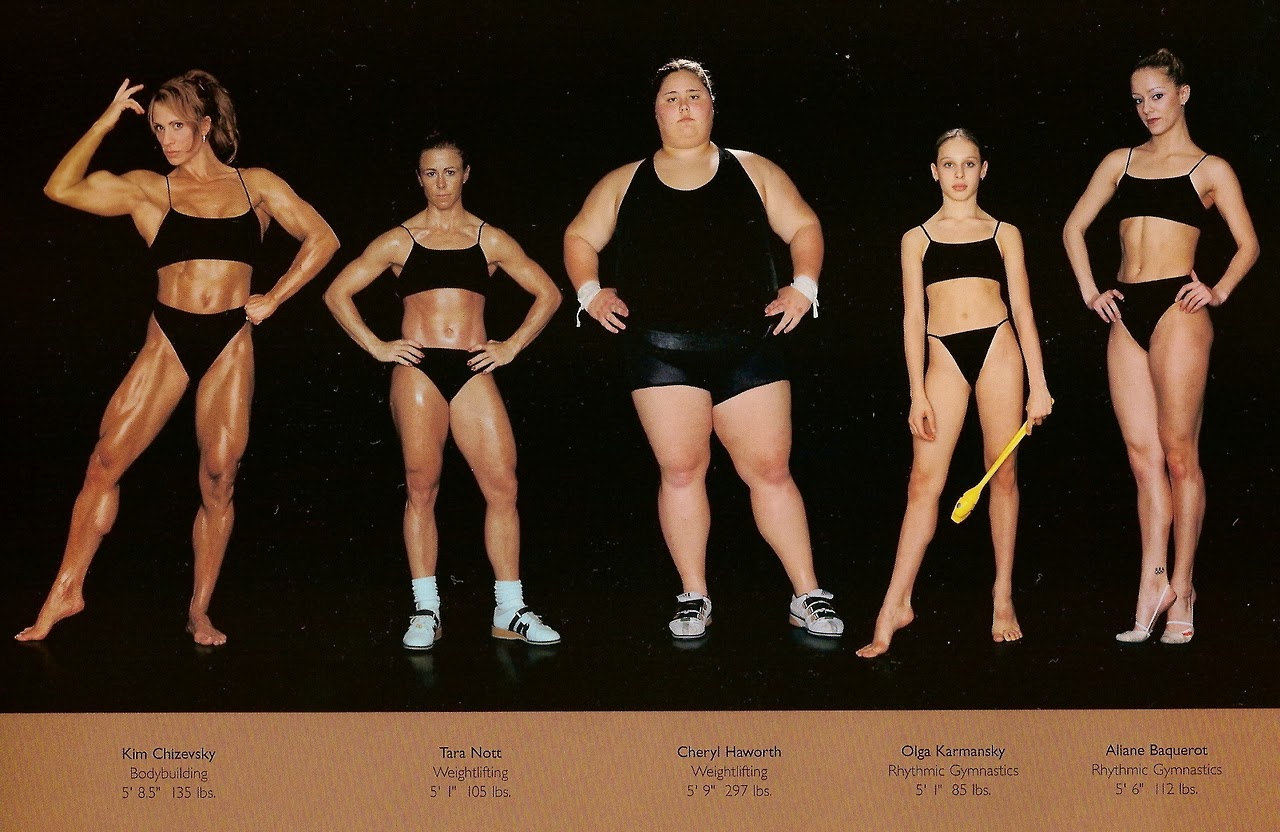 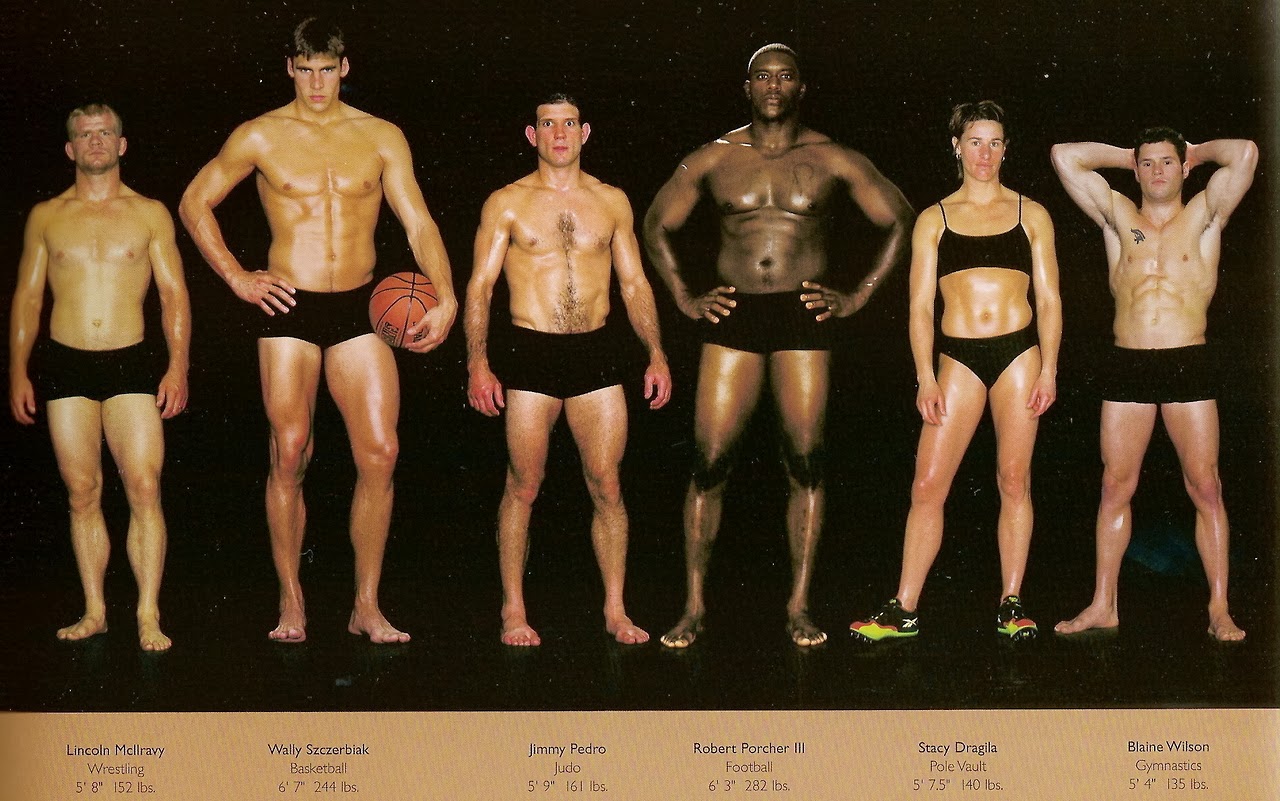 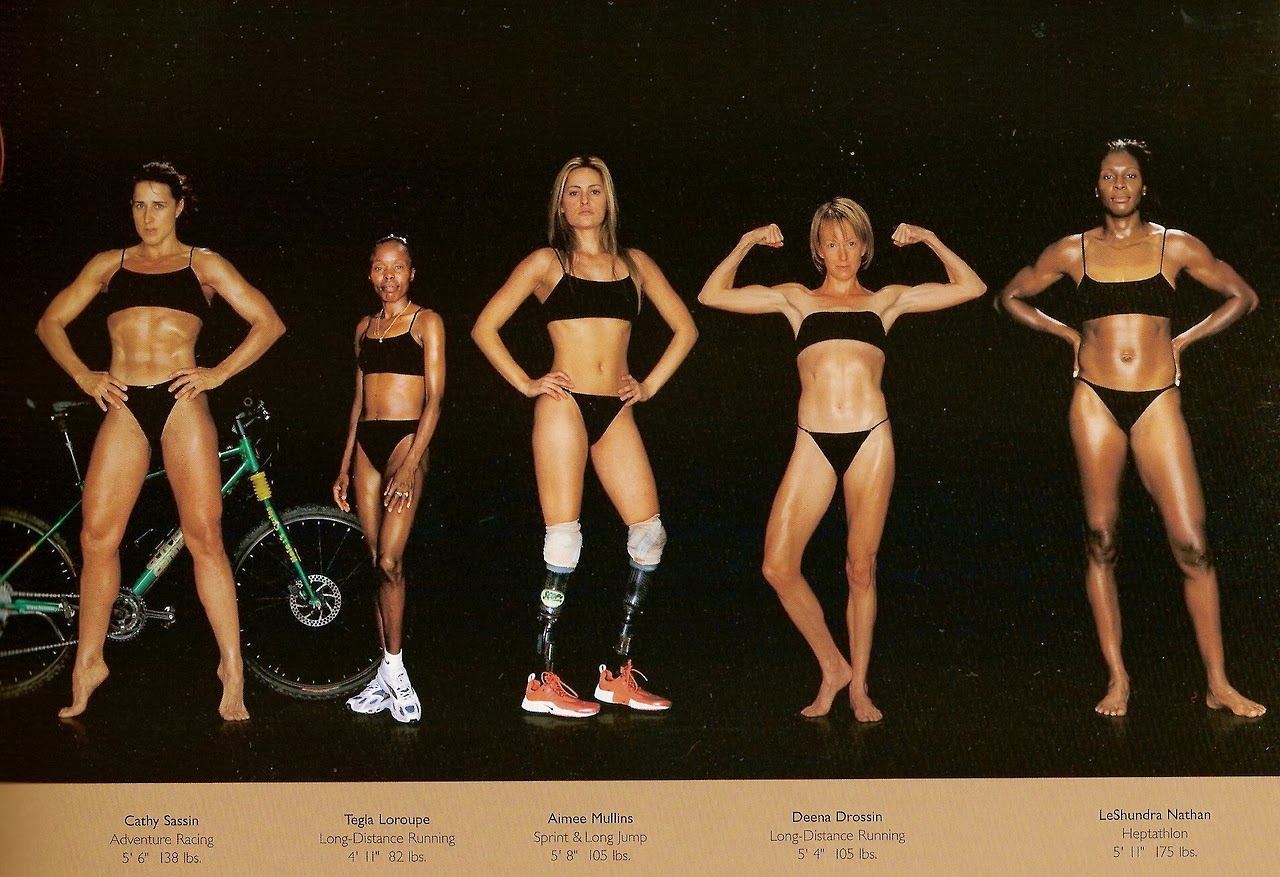 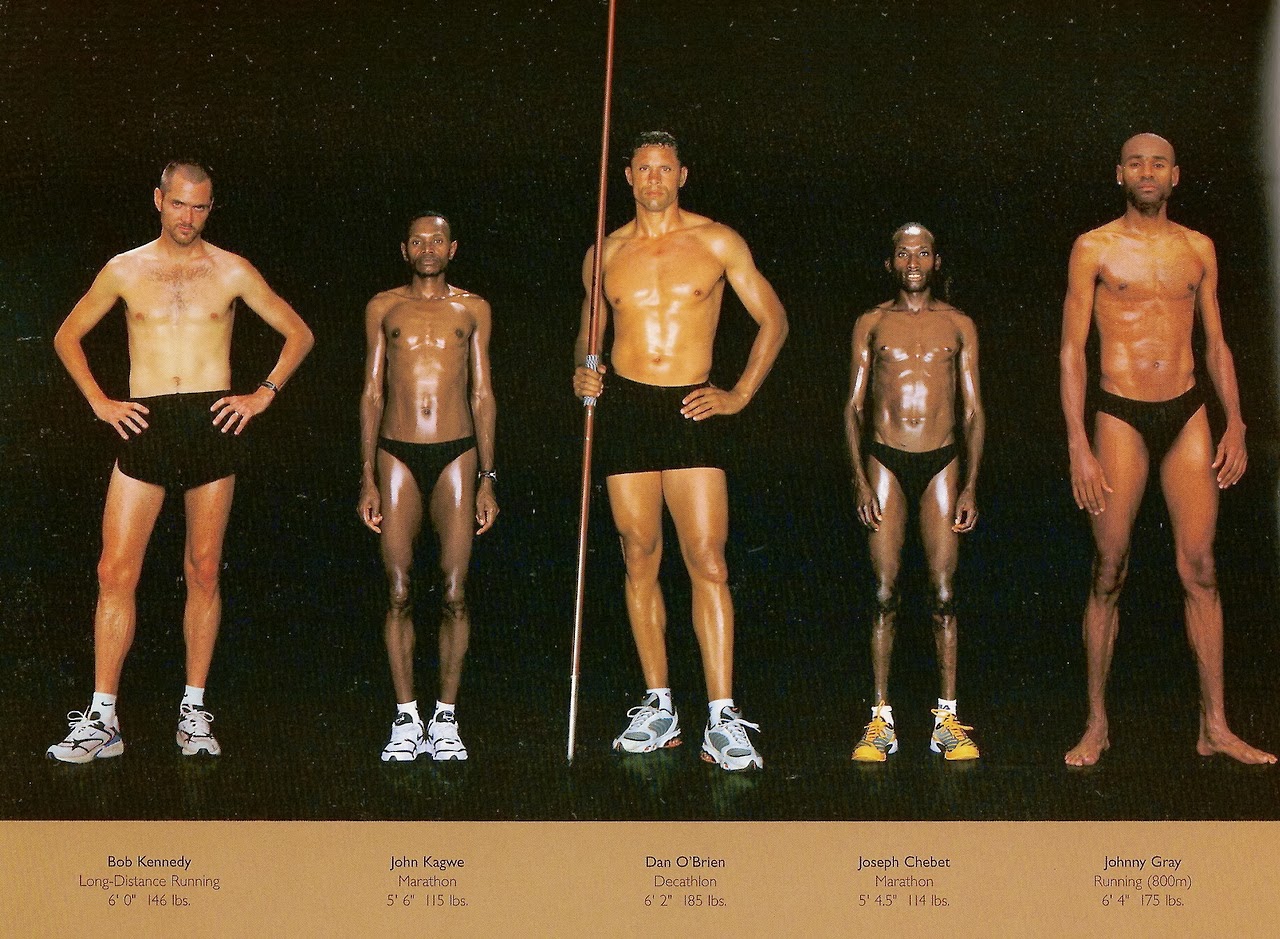