Since the beginning of the film industry there have been occasions when couture designers have been called upon to lend their unique talents to a particular film.  What results is often interesting, because a couture designer's strengths are so different from those of a costumer. Where a costume designer is quite used to making one thing look as though its something else, both for reasons of budget and time, the couturier is used to working with only the finest materials and the best workers, and to be able to lavish whatever amount of time is needful to make something perfect.
People like Gabrielle Chanel, Hubert de Givenchy, Pauline Trigere' and Hardie Amies all designed for film, but made clothes that were entirely couture in aspect.  To be fair, in each of those cases, the designers were selected for exactly that reason, either because the characters they were to dress were the sort who would wear couture, or because. as in the film Funny Face, it took place within the couture realm. 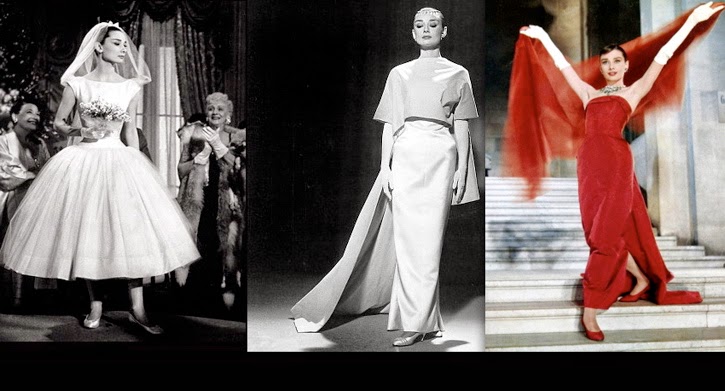 In the case of all these designers, the sensibility of couture was fully realized, since the clothes were all assembled in their ateliers and with their eye for perfect detail.
Only a few designers have been allowed the freedom to create true flights of fancy that stepped out of the couture and into another place.  I'm thinking primarily of Hardie Amies who designed the  costumes for 2001: A Space Odyssey, (and is the only one to have worked in both ways in film), Paco Rabanne, who got to design the wildly fun costumes for Barbarella, and Jean Paul Gaultier, who did the costumes for The Fifth Element.  In two of these cases we are dealing with Science Fiction fantasies, having more to do with imagination than hard speculative fiction.  And in both cases the results were delightful, sexy and fun. In the case of 2001, Amies was tasked with trying to realistically envision the world as it would be 40 years hence.
2001: a Space Odyssey was a groundbreaking film for Sci Fi costume.  Never before had there been a serious attempt to create fully logical extensions of ongoing trends in fashion so that the result made real world sense.  Prior to this film, the reliance on metallics, plastics and exaggerations of shape and proportion, made the results obviously costume, not real clothing.  You could certainly argue that Hardie Amies typically conservative design style resulted in clothes for the film that stepped not very far away from the world of 1968, and you'd be right.  What makes them work is that they are devoid of all sorts of silly gimmicks.  They look like real clothes worn by real people for real tasks.  Even the space suits look entirely functional. 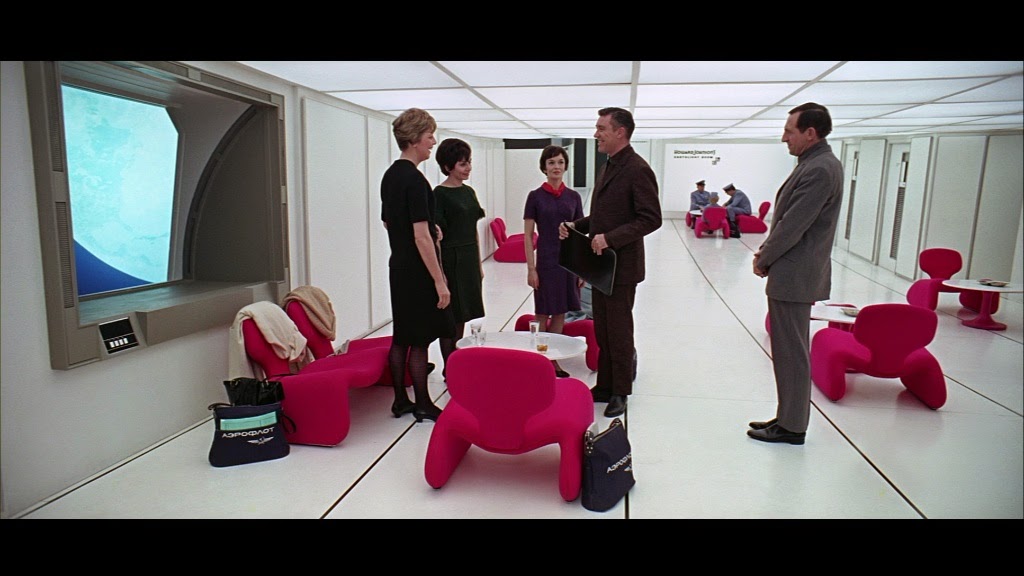 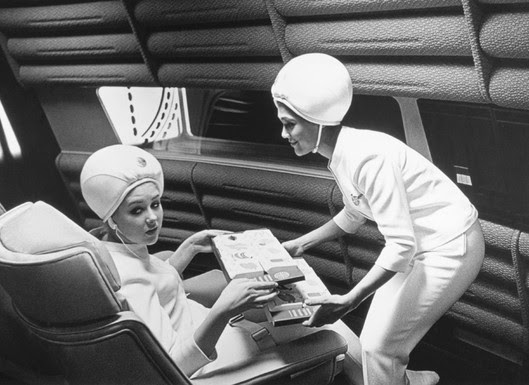 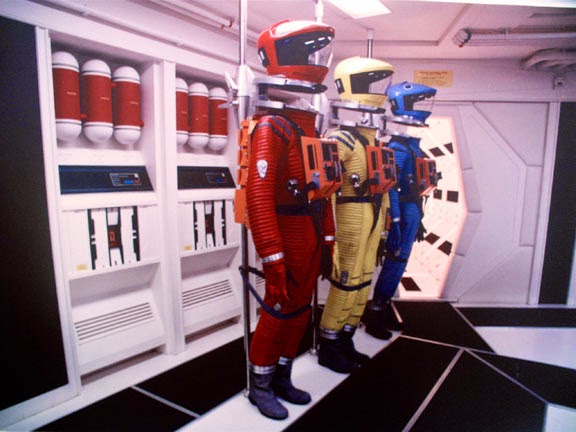 Slipping from realism to utter fantasy, Barbarella, based on a French cartoon of the same name, allowed Paco Rabanne to use every trick in his design closet; all at once, and to witty, sometimes hilarious, and usually sexy effect.  Like Amies in 2001, Rabanne ends up referring more to 1968 than to any other time, but it is his sense of proportion, and his sometimes odd use of materials that give the work an insouciant liveliness.  The costume for Jane Fonda that is composed of fake fur animal tails, with its long trailing tail of tails that ends up getting caught in the door of her spacecraft, is wryly sexy, and silly at the same time. 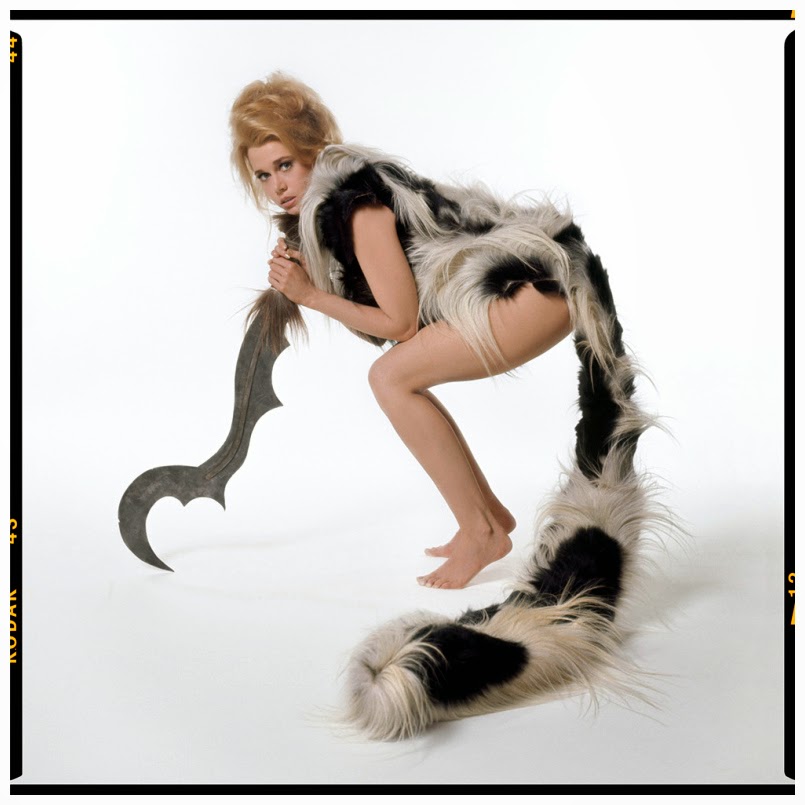 The myriad extra costumes within the palace scenes are all darkly perverse exaggerations of sexual fetish gear and biker clothing.  And the queen with her horned costume of fur and beadwork is some strange mixture of dominatirix, and forest creature. 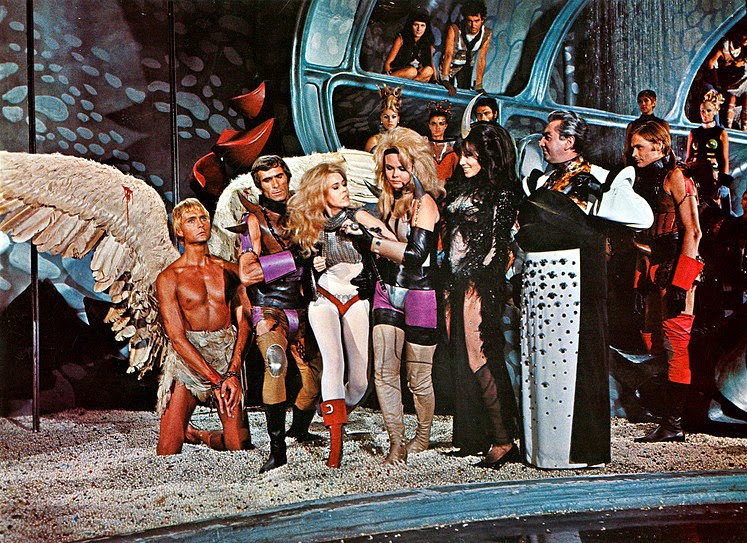 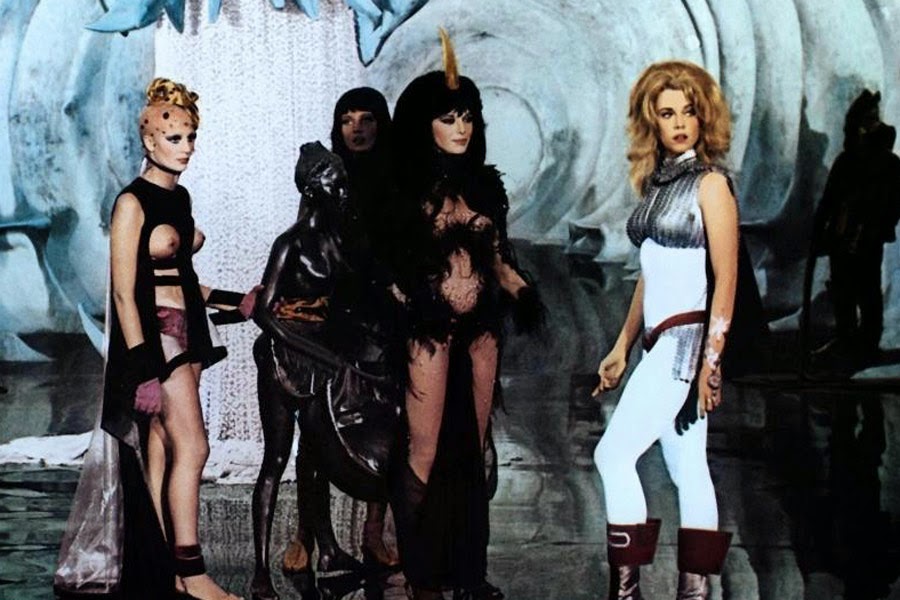 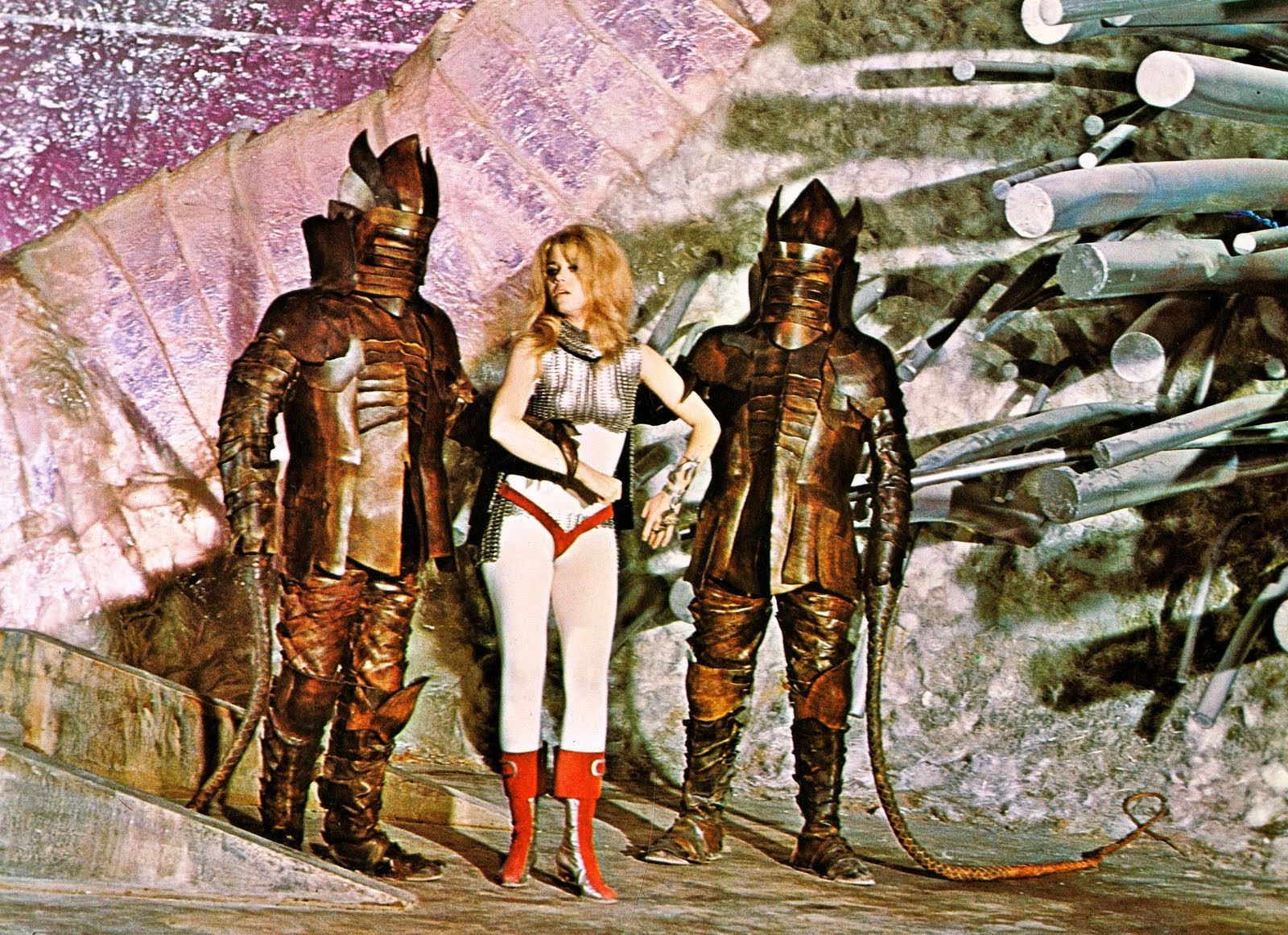 We get, at the end of it a commentary on human sexuality, and morals that still has resonance today.
We wait almost 30 years before we get to see another melding of couture designer and major fantasy.  The Fifth element, from 1997 was designed by Jean Paul Gaultier, and gave him plenty of room to express his humor, his commitment to blurring gender lines and his resistance to anything remotely staid.  The work he did is frankly sexy, sometimes deliberately amusing, and always dramatic and cheeky. 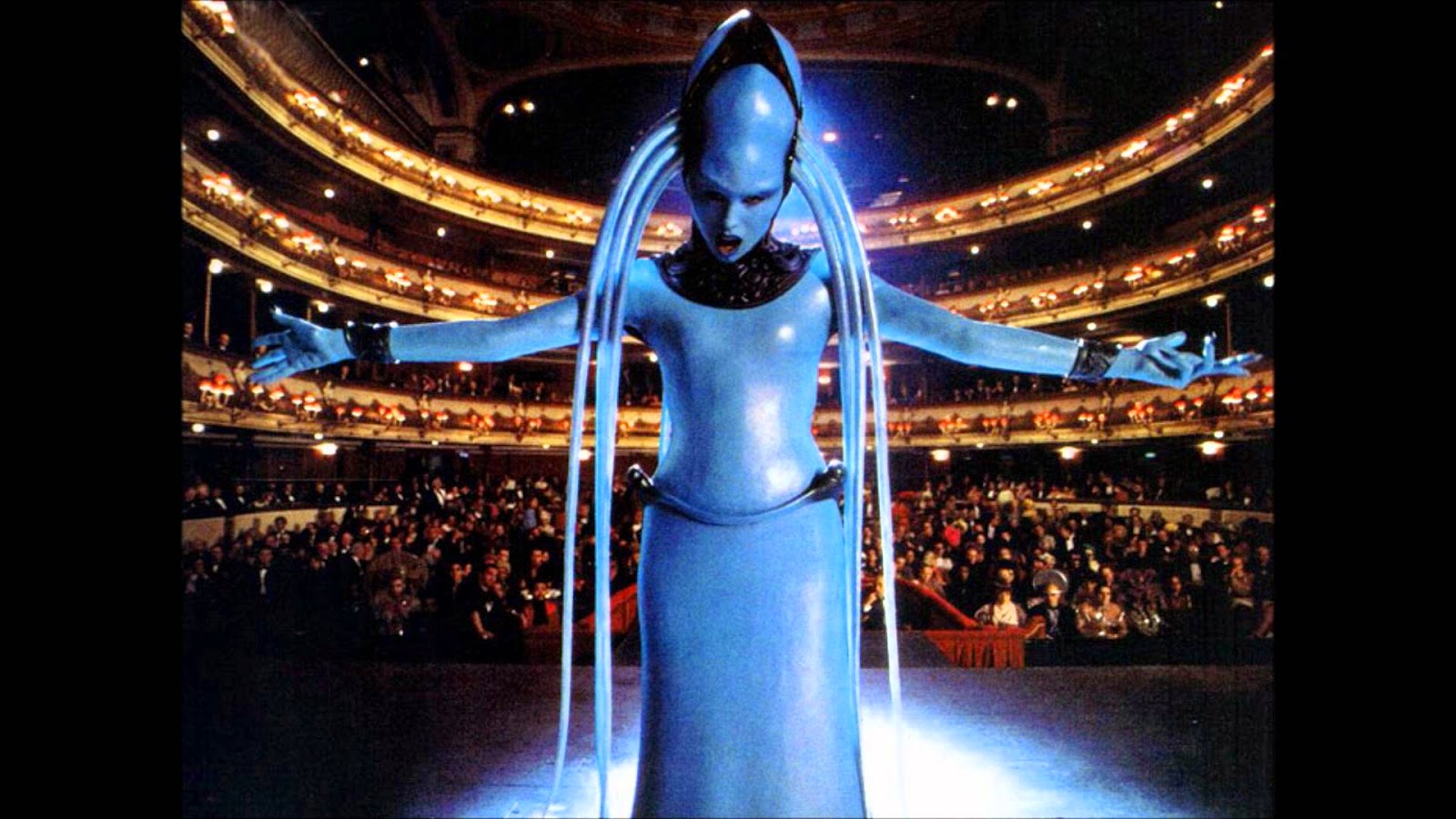 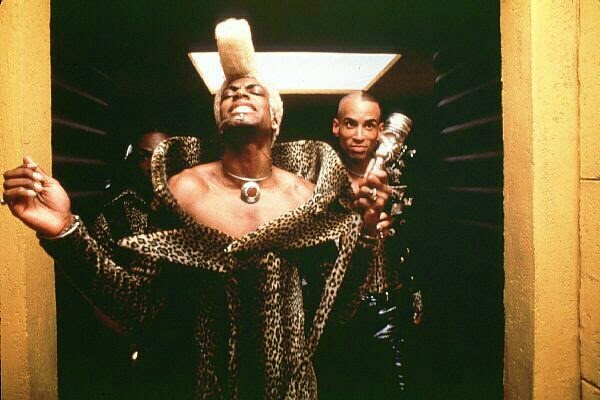 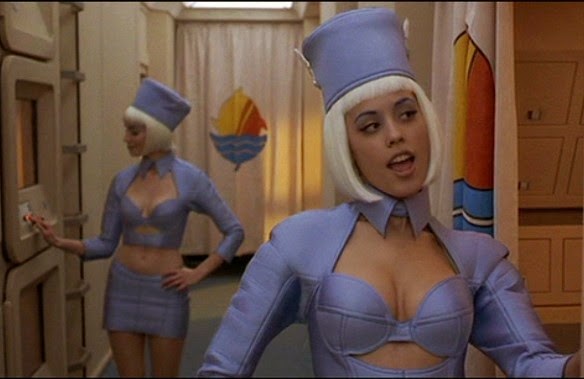 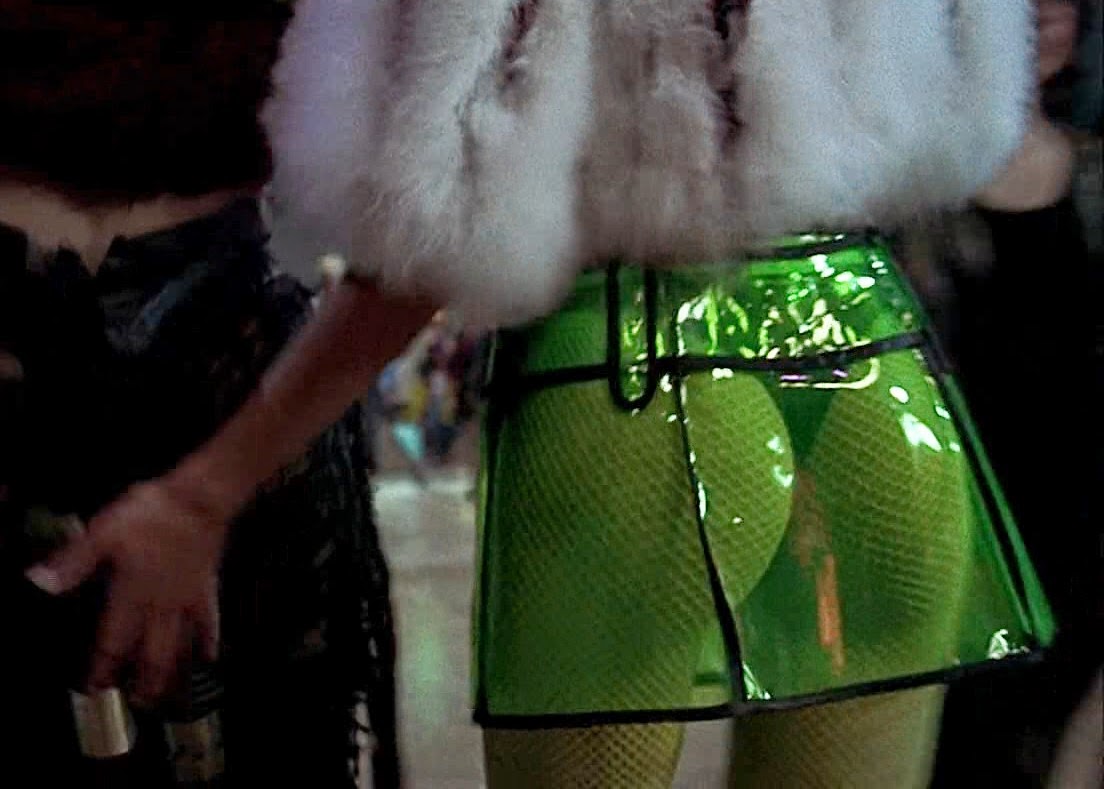 So, oddly enough, its not when designers are called upon to work within their usual sphere that they really shine forth, but when they are asked to step outside the lines and play in the world of fantasy.  What does this add to the Attire language you might ask?  Actually, such fantasy worlds give us freedom to explore new ways of presenting ourselves, and in a way that is safe, because its not the real world.  Many of the notions that get put forward in these kinds of films end up appearing, transformed, but nonetheless present in our daily Attire conversation.

Look around, you'll see what I mean.