I thought that after my last post and its rather emphatic call out it was time for something entirely light.  So, a scatter post was in order.

First up, this natty fellow in his plaid suit just plain makes me smile. People who really bring their style to full effect without dilution for public consumption are my day by day heroes.  This gentleman numbers among them with his boater, his tie matched to his socks, and that impressive plaid managing to stay balanced with all the other elements of his outfit.  Bravo, sir, bravo.

Second item is the wonderful Agnes Moorehead. It made me sad that during her long career she was so very rarely made full on glamorous, and classy. Her characters were so often the tightly wound, careworn sort.  Perhaps it was because she was not a conventional beauty, so Hollywood wasn't quite sure what to do with her, but in this film, "Mrs Parkington" she is permitted to be a chic, and brainy lady with tons of class, without giving anything up for it. Her character? Baroness Aspasia Conti. 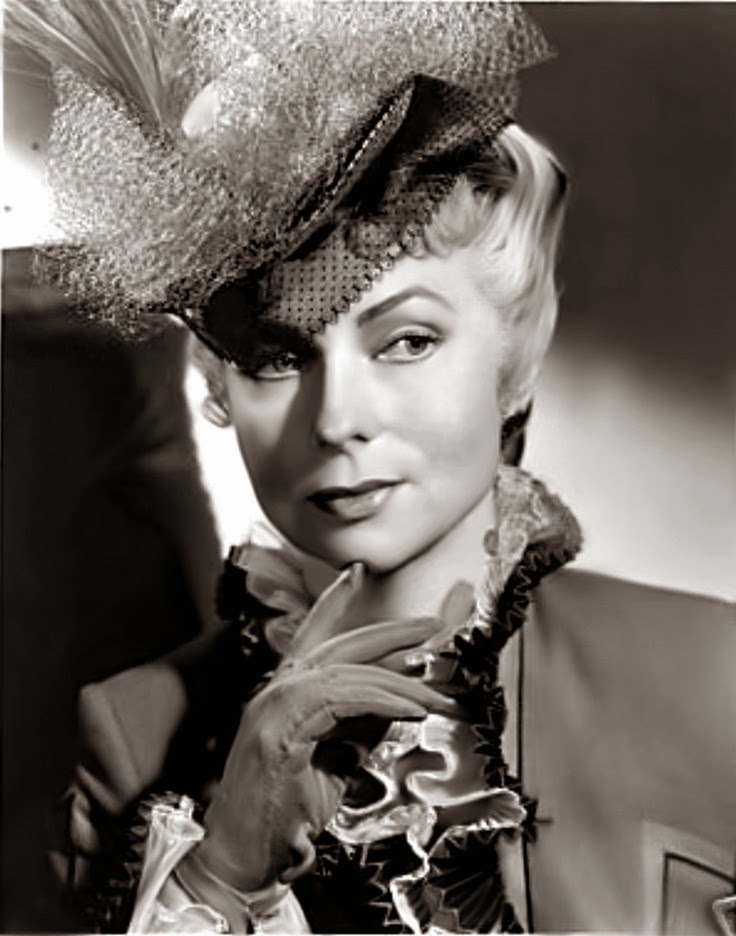 The extravagance of the 18th century has always had a strong pull for me. Largely its because of things like this.  This detail shot of the trimmings of a Robe ala Francais are a testimonial to the skill and craftsmanship, not only of the dressmakers, but of those who wove textiles, and made the complex, fragile and altogether lovely passementerie that decorated the clothes they made.  In this case a sinuous band of very wide fly fringe (so named for the tiny tassels that flew away from the surface of the trim, and for their subtle resemblance to insects) has been perfectly matched to the colors of the fabric, and applied perfectly, without a single pucker or pull. 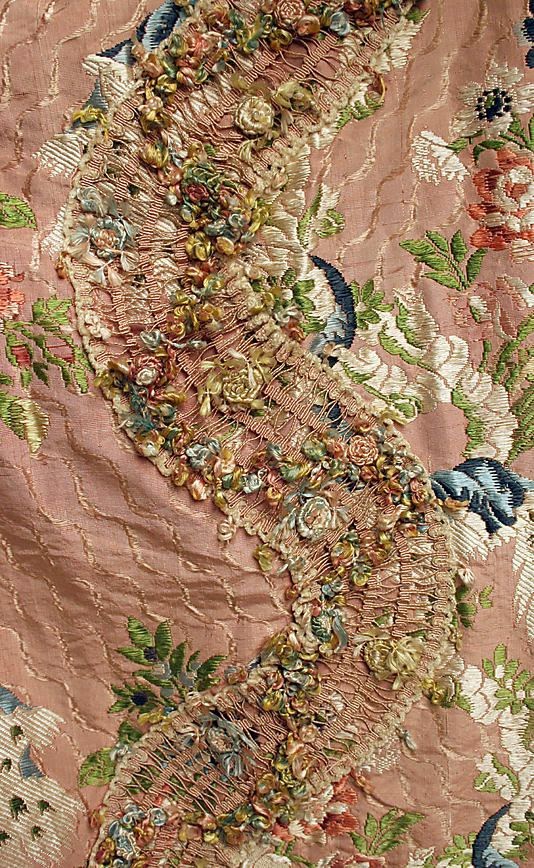 When I came across this image of two Russian soldiers, at first I was puzzled by it. When it finally dawned on me what I was seeing it made me think a good deal.  Camouflage material has been around a long time, but we do tend, in the US at least, to think of it as being a pretty static pattern.  Clearly that is a mistake.  This is how camouflage pattern was done in Russia, before the Revolution.  Interesting how such an idea manifests in such radically different ways.  But in terms of what its meant to do, I can see that both of these fabrics would do the job nicely, by confusing the eye. 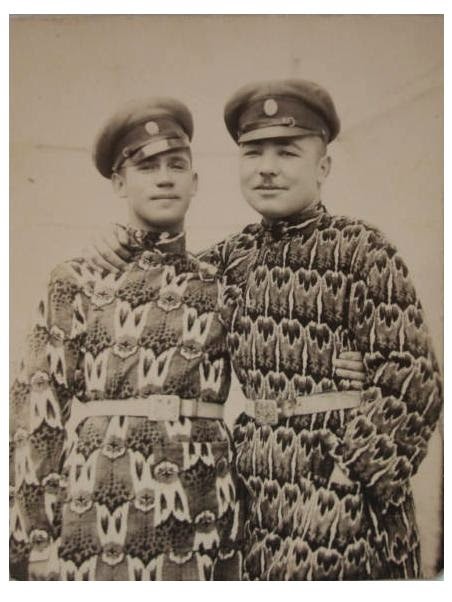 Number five is a piece of sublime bling.  This choker is from 1903.  Its alternating round cut opals and diamond encrusted sterling flowers with pearl centers.  This gorgeous thing must have been stunning in candlelight, viewed across the dining table, or at the theater.  Jewelry conveyed something altogether different, back in the day, from the meanings it gives now.

The traditional attire of a Spanish bullfighter, the traja de luces, is without question one of the most opulent garments in the language of Attire for men.  Dazzlingly complex in decoration, and skin tight of fit, it manages, though being lavish in the extreme, to be at the same time potently male, and sexy.  This image of the decorative work of a suit of lights makes me weak kneed for its artistry. 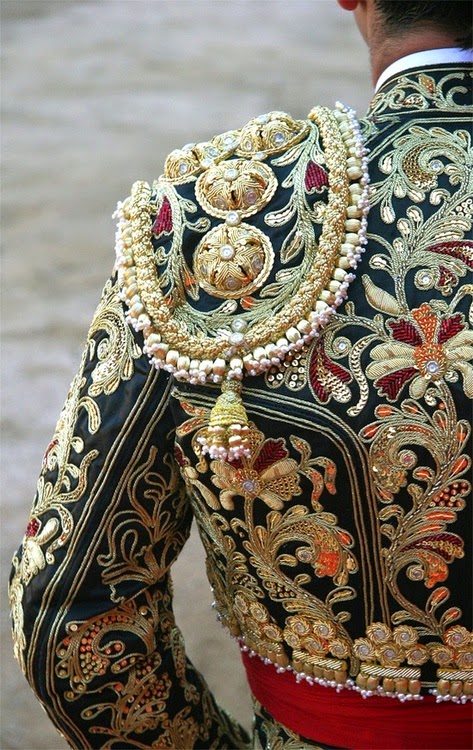 I suppose its becoming a tradition when I do a scatter post to include one thing by Mr Charles Frederick Worth.  I love this piece unreservedly.  The Wheat Sheaf gown is of pale rose pink silk satin, with an asymmetrically cut bodice and minimal additional details beyond the huge scaled wheat stalk embroideries of the skirt.  Part of what makes this piece amazing to me is that the wheat embroidery was done AFTER the skirt was assembled.  The beadwork crosses over each seam line flawlessly, obscuring the joined pieces, rather than the more conventional way of doing the beadwork on the unassembled pieces.  This also means that the work was done in the le Main fashion, which takes far longer. 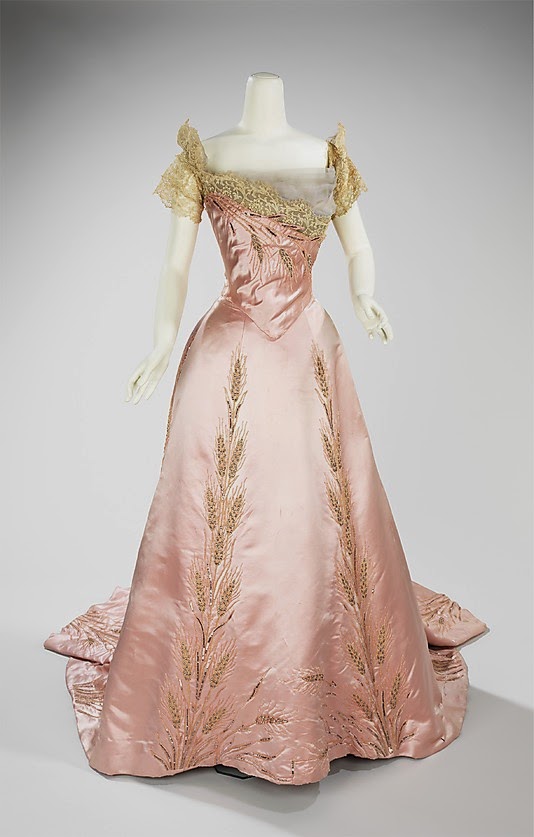 And last but not least this wildly sexy image.  You know me and my man-skirt thing. I love em, nearly all iterations of them. And the idea of this full length tartan skirt with the fold over waistband is appealing to me.  Sure, Mr Man there is a dish and a half, but I do try to stay focused on the garments in play.   What was I just talking about?  Never mind. 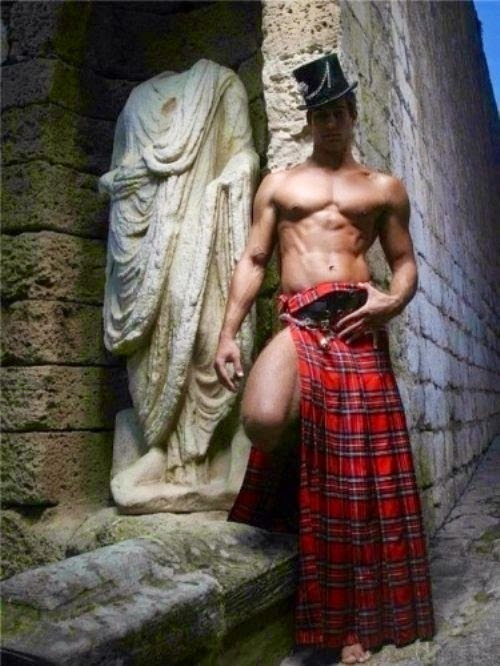