Hi all, its Saturday, and that means its time for the weekly scatter post, which I've discovered is one of your favorite things I do.

I'm going to start us off with a visit from that silent screen sexpot and siren, Theda Bara.  Of course here name was a complete fabrication, in order to promote her image of exotic temptress.  This shot is from one of here many quasi-biblical epics.  The reason I post this is as a reminder of how radically our notions of feminine beauty and sex appeal have altered over time.  Then of course, there's her utterly hilarious "historical" costume, consisting of a somehow entirely unsupported pair of beaded bra cups, a snake bracelet on her calf, some random strands of pearls around her hip and something that looks like a kitchen curtain draped over her shoulder.  Perfect historical accuracy. right? 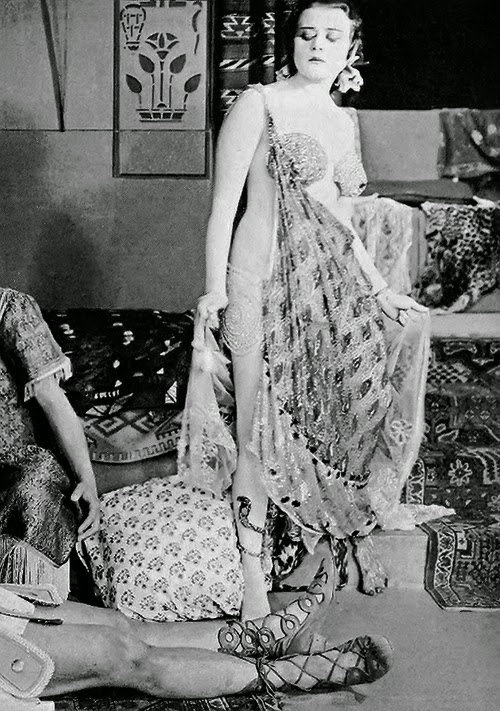 This second image is a contemporary fashion editorial image.  Sometimes in an effort to promote clothing, the mood and design overtake the production, though as in this case, sometimes to positive effect.  In this case we're looking at a rather unremarkable pin striped suit, but the placement of the model, the dogs and other props get us to look at something that otherwise we might pass right by. Also, the accessories up the ante here.  So its a nice example of how Attire gets a boost, conversationally, by the things we do to support the main words in our sartorial conversation. 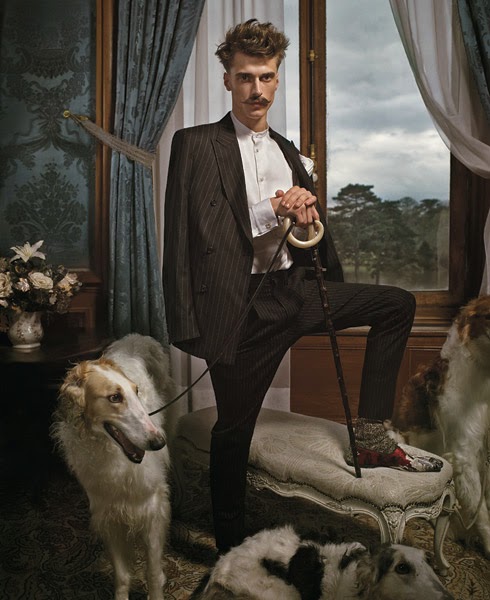 In the 1960s the magazine Australian Women's Weekly did this kinda awesome photoshoot of actress Raquel Welch wearing a number of the biggest names in fashion of the time.  What makes this intriguing to me is that though Ms Welch is undeniably beautiful, she is A, no model, and B, is not really well served by the clothes they chose for her.  Most of the fashions they picked really worked best on the stick thin gamines that were the rage. 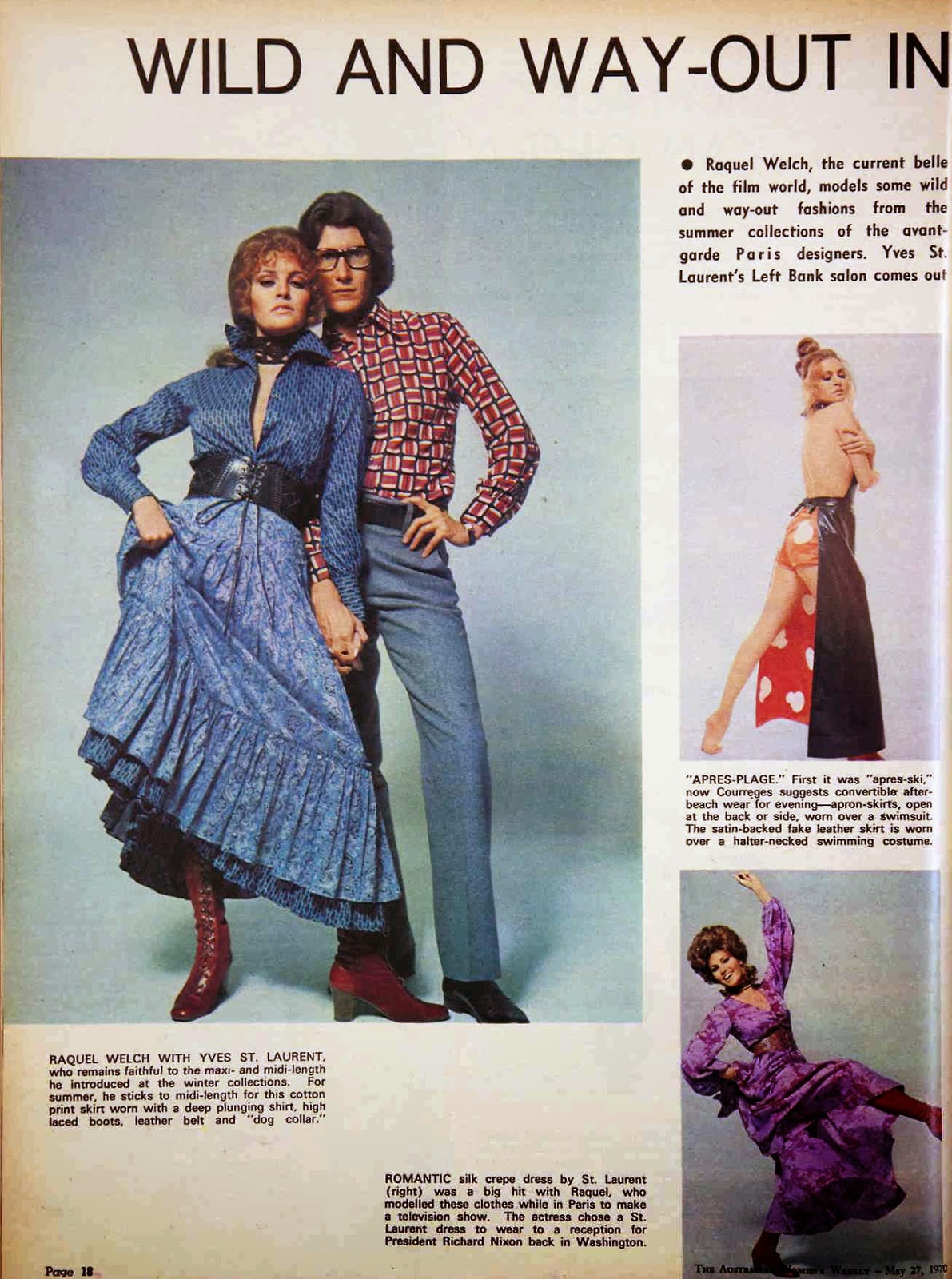 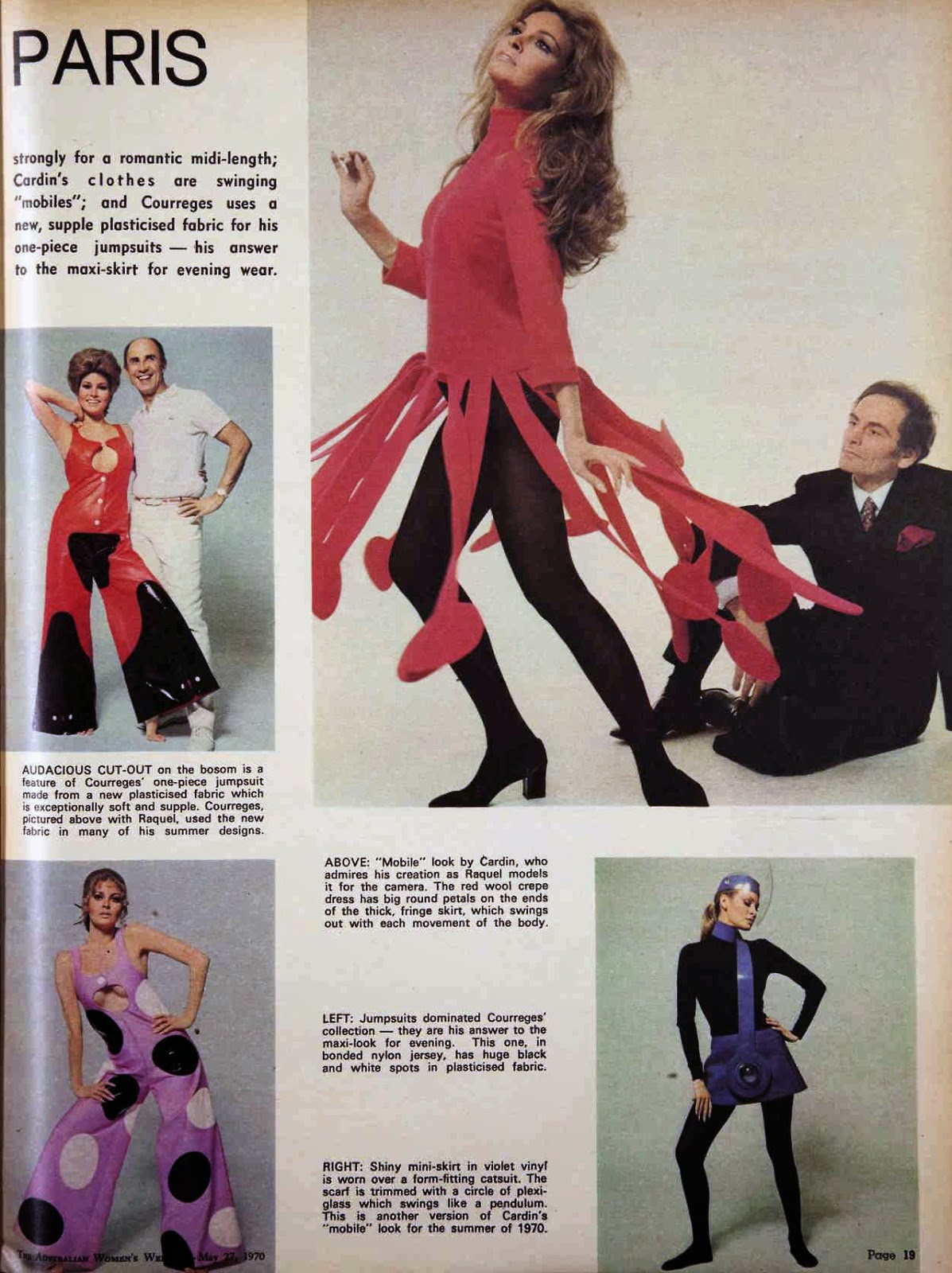 When I came across this mask I gasped out loud.  This Dia De Los Muertos mask is made entirely of small beads affixed on their side so that their through holes are visible.  Its a remarkable work of art, and also a testimonial to the transformative power of the mask. We become someone, or something else entirely. 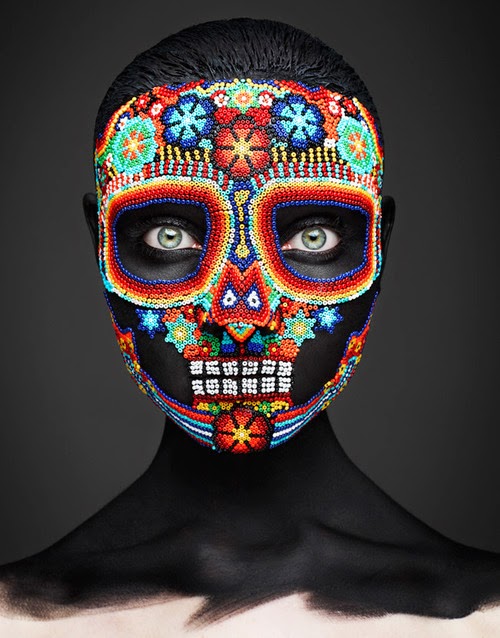 This next oddity is called a Mercury Retrograde Body Mitten.  Its the ultimate in cocooning for the stressed out modern.  Is it a valid word in the Attire language? I would think not. Its presence is meant to be a joke, really, and its existence is far too ephemeral for it to become part of the lexicon.  Still, it has a certain validity for comment, since very often our clothing choices are driven by a need for emotional or psychological support. 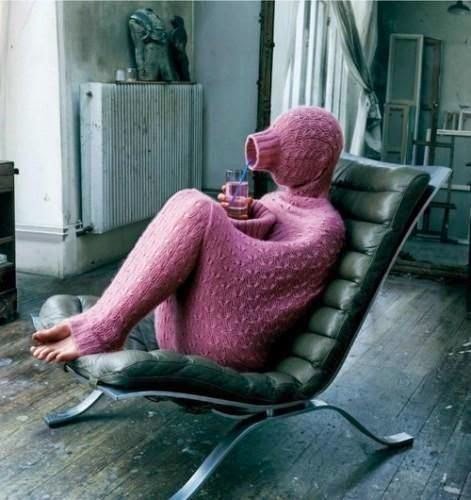 I include these two arresting images, because we have so rarely allowed men to adorn themselves with flowers, beyond the occasional buttonhole posey. This hirsute model  gains something wonderful with the full blown blooms on his head.  I wonder, could we make this a thing?  Personally, I'd love it. 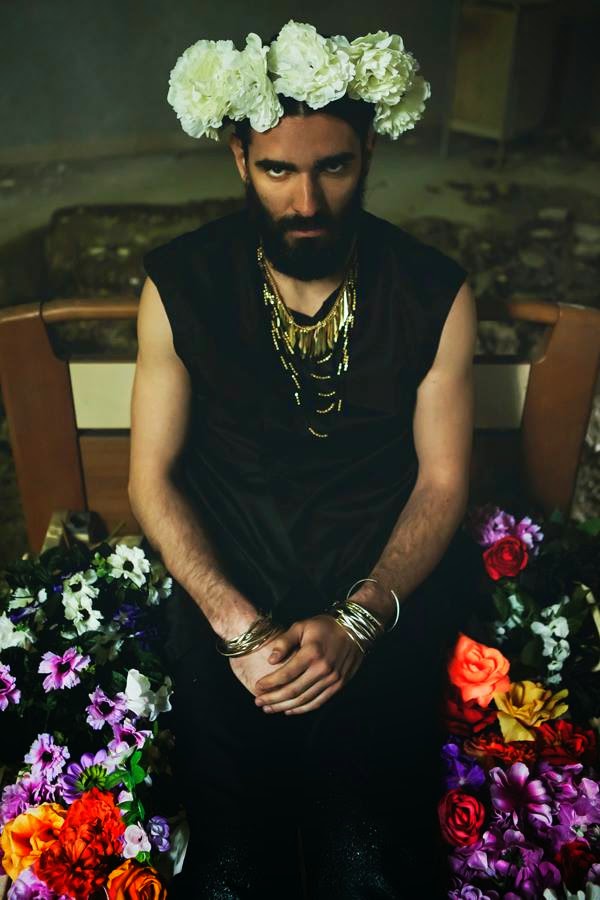 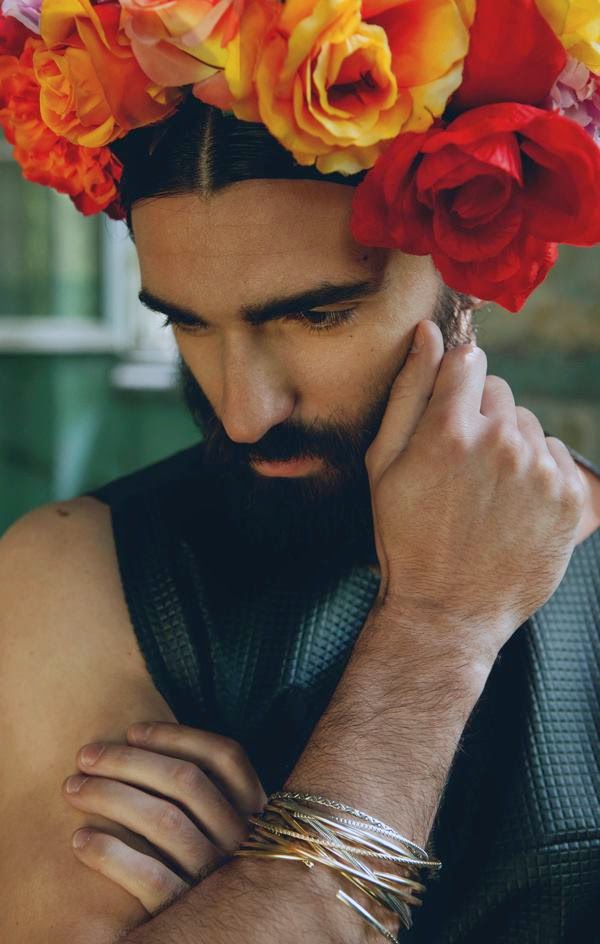 I know the headdress in this image is entirely digital, but I love it so that I wanted to share it anyway.  It was devised by digital artist Don Dos Santos and its called "Shiva's Crown.  Our connection to such things is an old and nearly visceral one.  Its one of the pieces of apparel that lifts us out of ourselves, and takes us, and those who view us, to another place, or another time.  It becomes the realm of magic.  I think we could use a good deal more of this sort of magic in our lives. 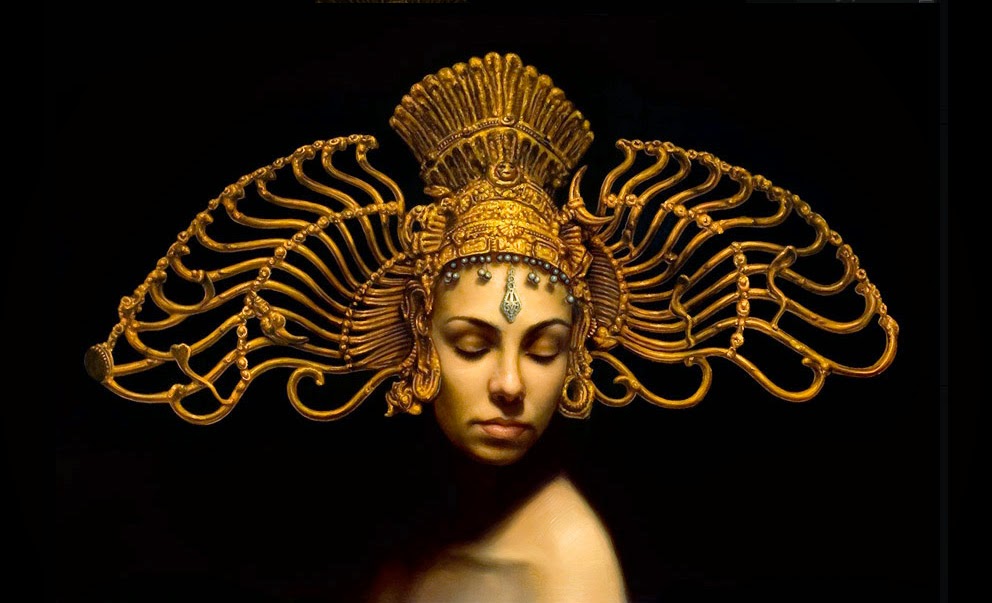 And as a final part of this weeks offering; in 1906 the G. Guisiffi L.T. Company created this rather remarkable evening frock.  Remarkable how?  Well its all about the strange and profoundly Art Nouveau styling of the bodice in particular.  Contemporary art always influences clothing design, and vice versa.  This dress, with its dangling bits, asymmetry, and naturalistic looking embellishments is a wearable version of Art Noveau's ideals.  And just take a good long look at the level and variety of the dressmaking techniques in use.  There are pin tucks, ruching, smocking, applique, and bias edging, all worked without a flaw out of silk chiffon, which is one of the testiest, least forgiving textiles around.  This is a tour de force of the dressmakers artistry. 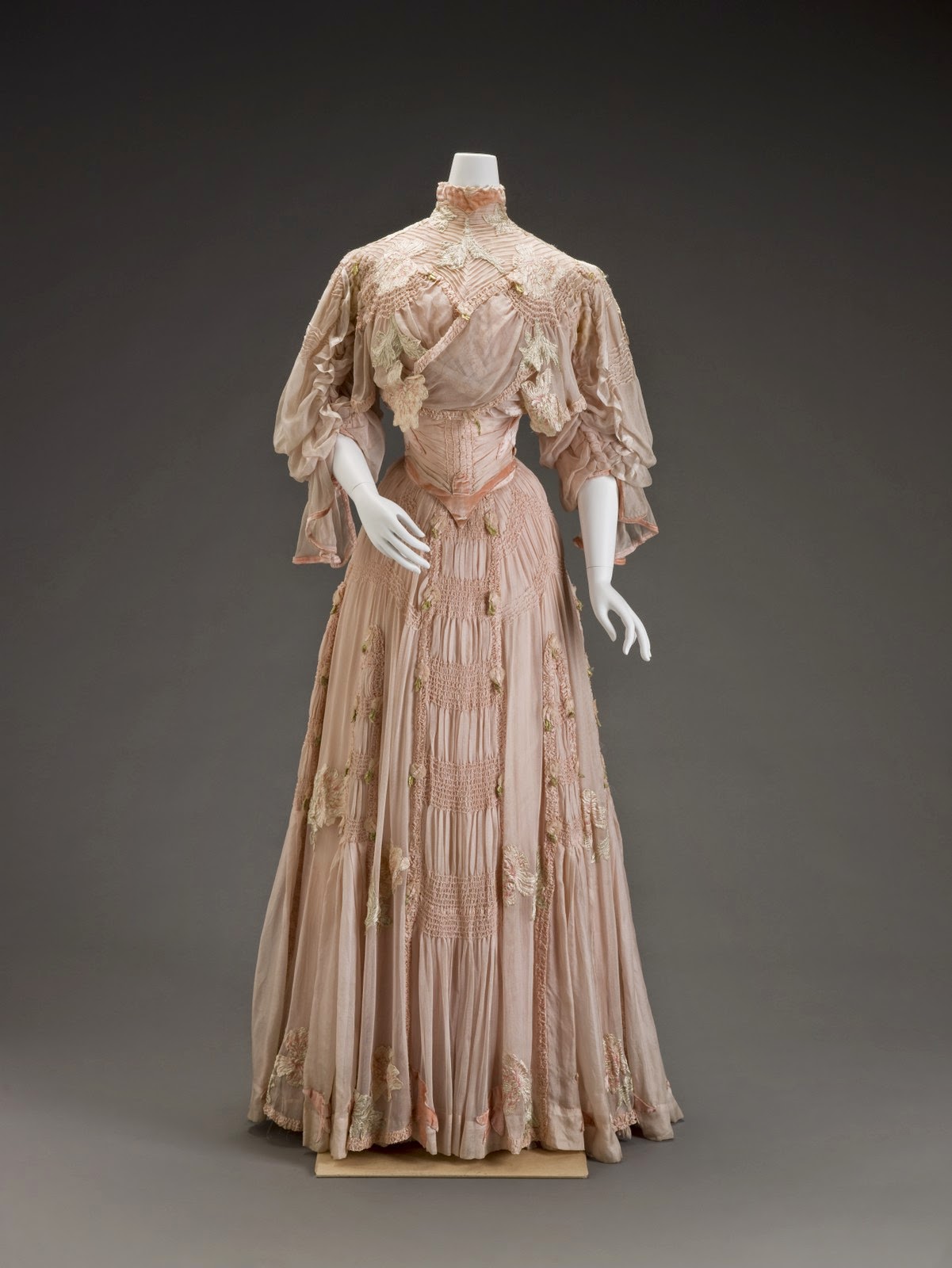 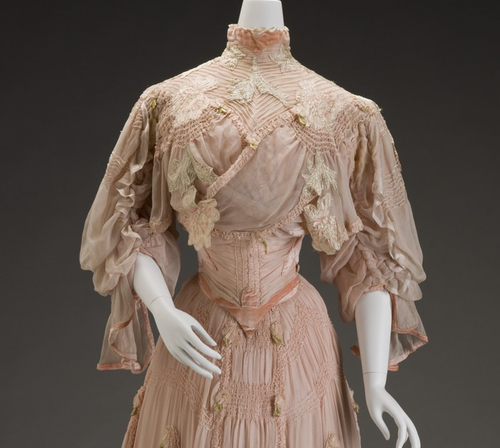 By for now, and have a wonderful weekend!
Posted by Paul G. Ellis at 6:55 AM