The couture house Boue' Soeurs was never known for its innovations.  They made frankly pretty, but conventional clothes for wealthy ladies, and did so successfully from 1899 when they established themselves in Paris, through the first World War, when they moved to New York; making them the first couture house to operate on American soil, and into the 30s.  Sylvie, and Jeanne Boue' built a business that was nearly entirely about special occasions. They didn't worry about walking suits, or traveling clothes. Their metier was extravagance, luxury.  So it was only natural that they were called upon often to make court presentation clothing. 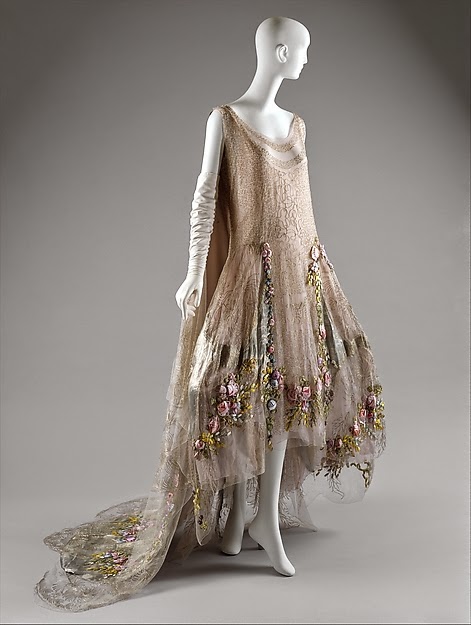 This effort of their house was created in 1928, and bears so many of the signatures of their work that it was only natural to present it to you.  It comes to us from the vast, and varied collection at the Metropolitan Museum of New York.  Many thanks to them, and their conservators for caring so well for this. 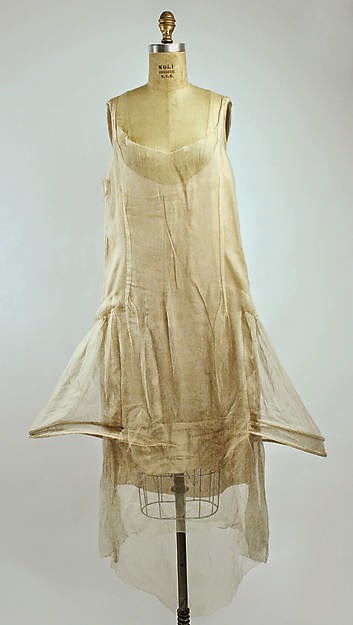 But lets begin underneath it all.  This is the under-slip with its built in panniers that was one of the hallmarks of their design style.  Made up in cream silk chiffon, the slip has two pairs of celluloid pieces on either side to create, and support the distinctive shape. 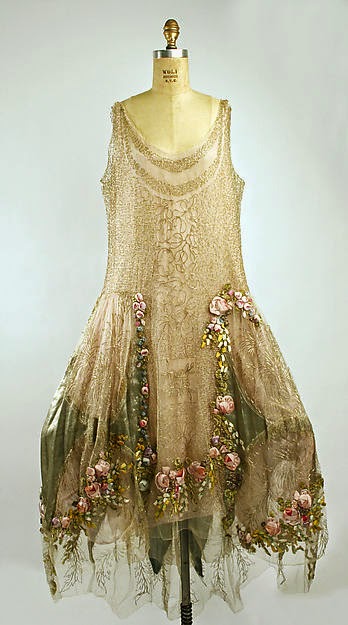 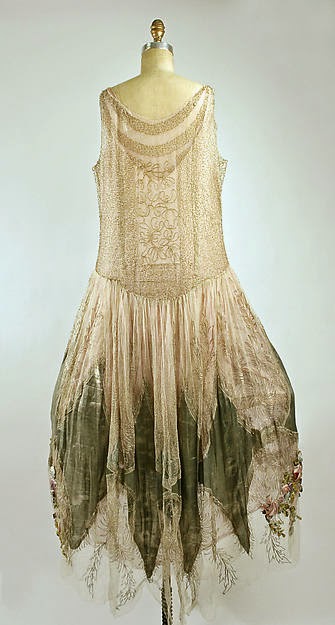 The dress has large insertions of real silver lame', (now tarnished), as part of a dress of silk organdy.  The gown is embroidered over its surface with a narrow metallic cord in a floral, and foliate design. The dress is further decorated with another of the house's signature techniques, ribbon work.  Looping swags of silk ribbon roses, bud and leaves are worked in multiple colors over the skirt, in relief, and in volume, and on the silver lame' regulation length train. 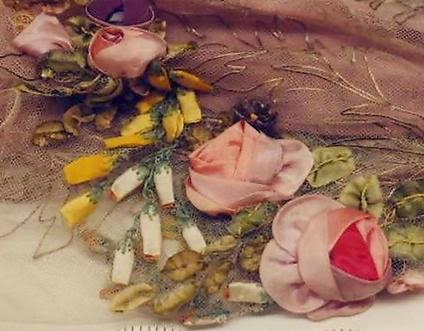 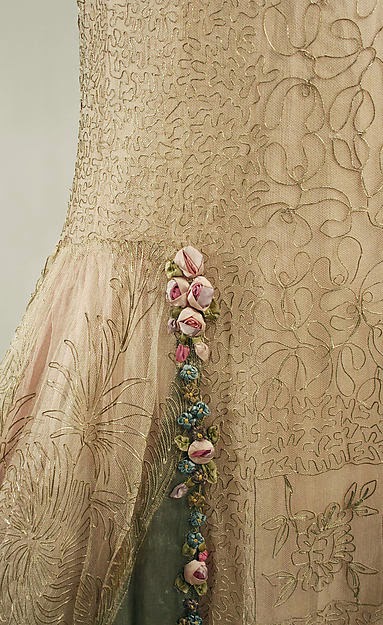 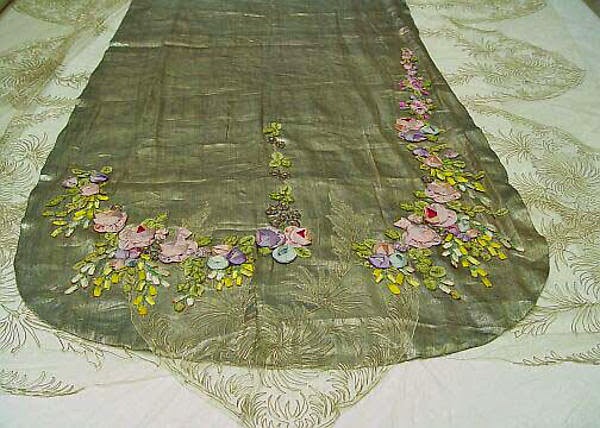 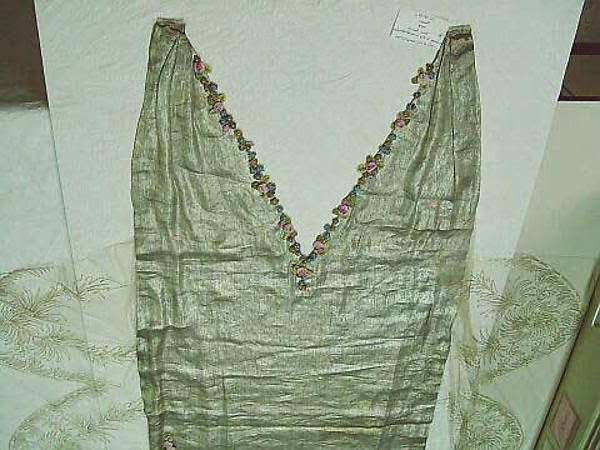 The shoulder attaching train has an over-layer of organdy cut in large deep points, and embroidered, like the dress, in foliate forms out of metallic cord.
By 1928, such looks as this one, with its side panniers of the Robe de Style fashion, had become passe', and the sleeker, leaner looks that would dominate the 30s began to emerge. So this dress, though undeniably lovely, was an idea on its way out, already supplanted by other forms. In that,  there is a subtle subtext.  We are looking here, not only at a dress who's idea had already passed, but a physical symbol of a way of life that was rapidly vanishing.  By the mid 1950s the official English court presentation levy would be gone, never to return. 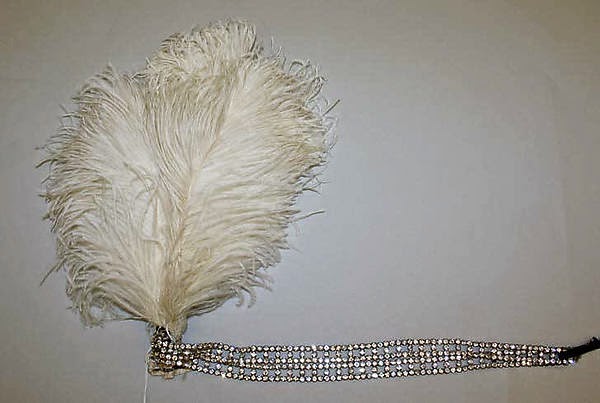 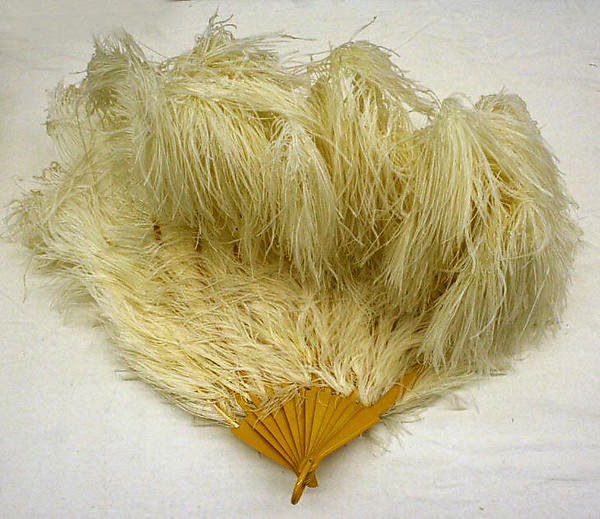 Its interesting to note that in the bequest of this gown to the Met, there was included both the rhinestoned headache band headdress, with the requisite 3 ostrich plumes, and also the required ostrich feather fan. 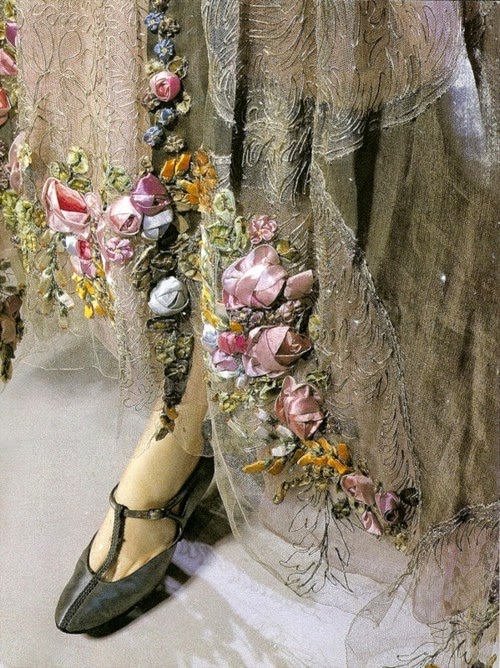 A fragile and beautiful thing, meant for one time, and one time only.  We can just hope that the lady who wore it, felt as beautiful inside, as this dress intended to make her look outside.
As a final aside, to give you an idea of just how many of these things they turned out, here's another court presentation dress from the same year. This dress is also in the Met collection. There are certainly differences in the design, from one to the other, but the materials, types of techniques and decorations are the same.  Organdy, chiffon, lame', ribbonwork flowers, thin metallic cord, shoulder mount train, panniers. 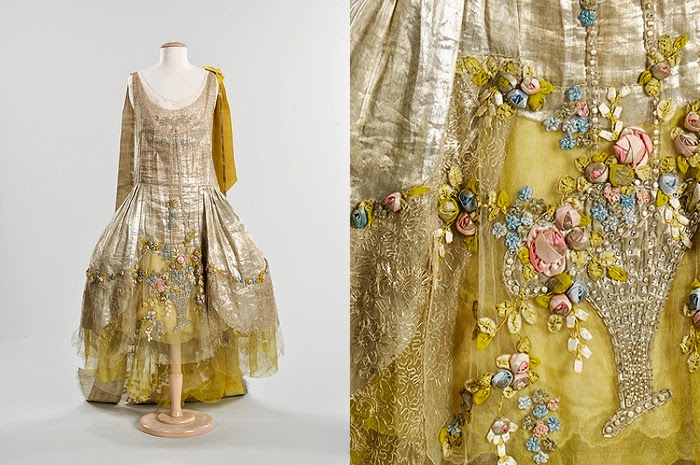 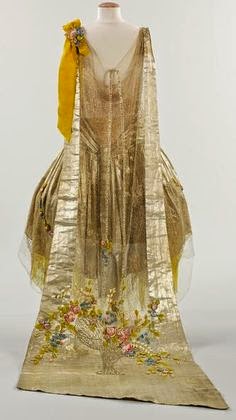 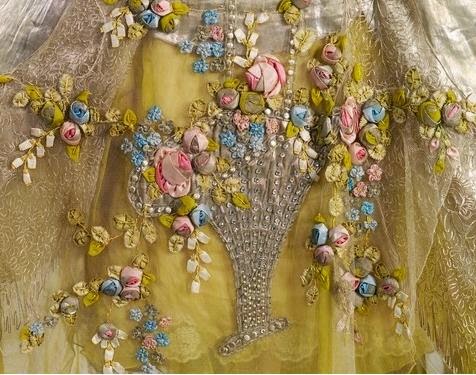 It was clearly an easy, go to look for them.