By now, you all should have learned a great deal about the inner recesses of my little head.  After all these scatter posts, and all the  strange, beautiful, funny and weird I've shared.   So, once more into the breach dear friends! 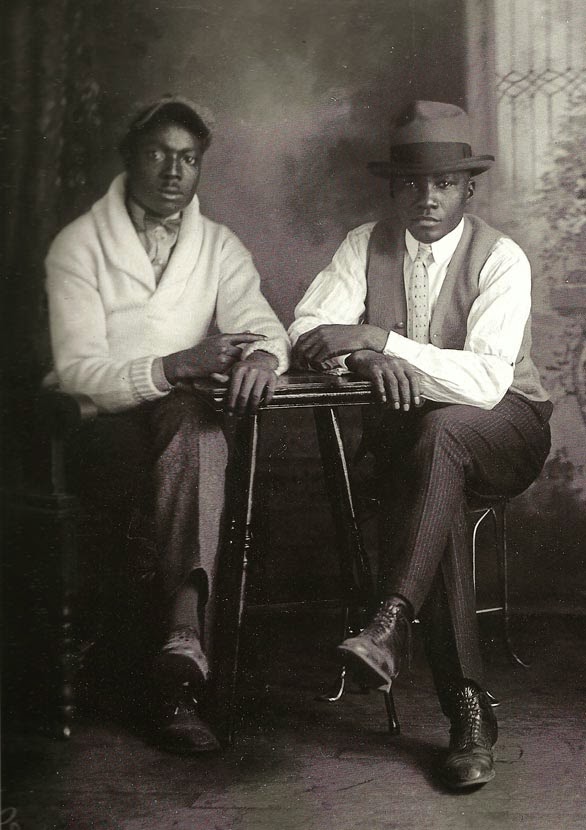 This first image was shot by Richard Samuel Roberts in 1931 and was published in GQ magazine.  That in and of itself makes this noteworthy, considering the times.  But I love this image for other reasons entirely.  These are not models, these are regular guys, but each of them is bringing their own strong voice of themselves to the table they sit at, through the device of apparel.  Even given the societal constraints, and the narrowness of what was available for men to wear, they are each expressing something unique to themselves.  This image is a wonderful lesson in what Attire can communicate to us. 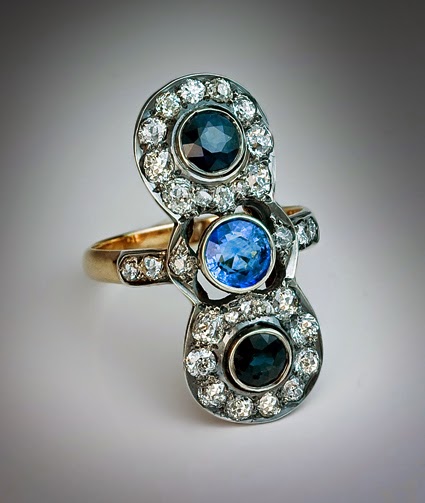 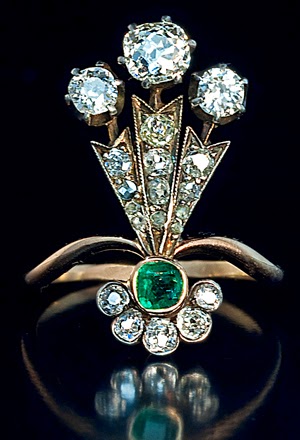 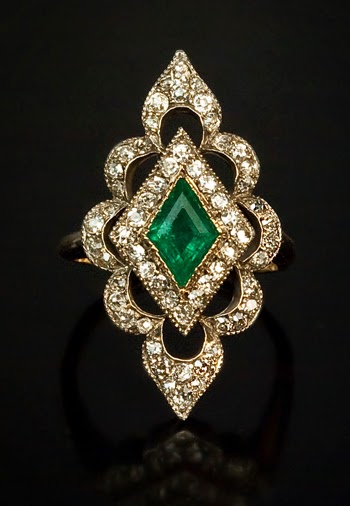 The Russian artistic aesthetic include both a love of grand scale, and an adoration of dramatic statement.  And these three rings that date from 1890 to 1900 are all a case in point.  In each one of these there is a design power that is far beyond just a bunch of diamonds, and some colored stones thrown in. There is a level of grandeur to each of these that is not just expressive of vast wealth, but also of that essential love of the operatically grand.  These are not jewels for a fragile hot house flower of a woman.  These belong to a woman who is aware of her strengths, and confident in her abilities. 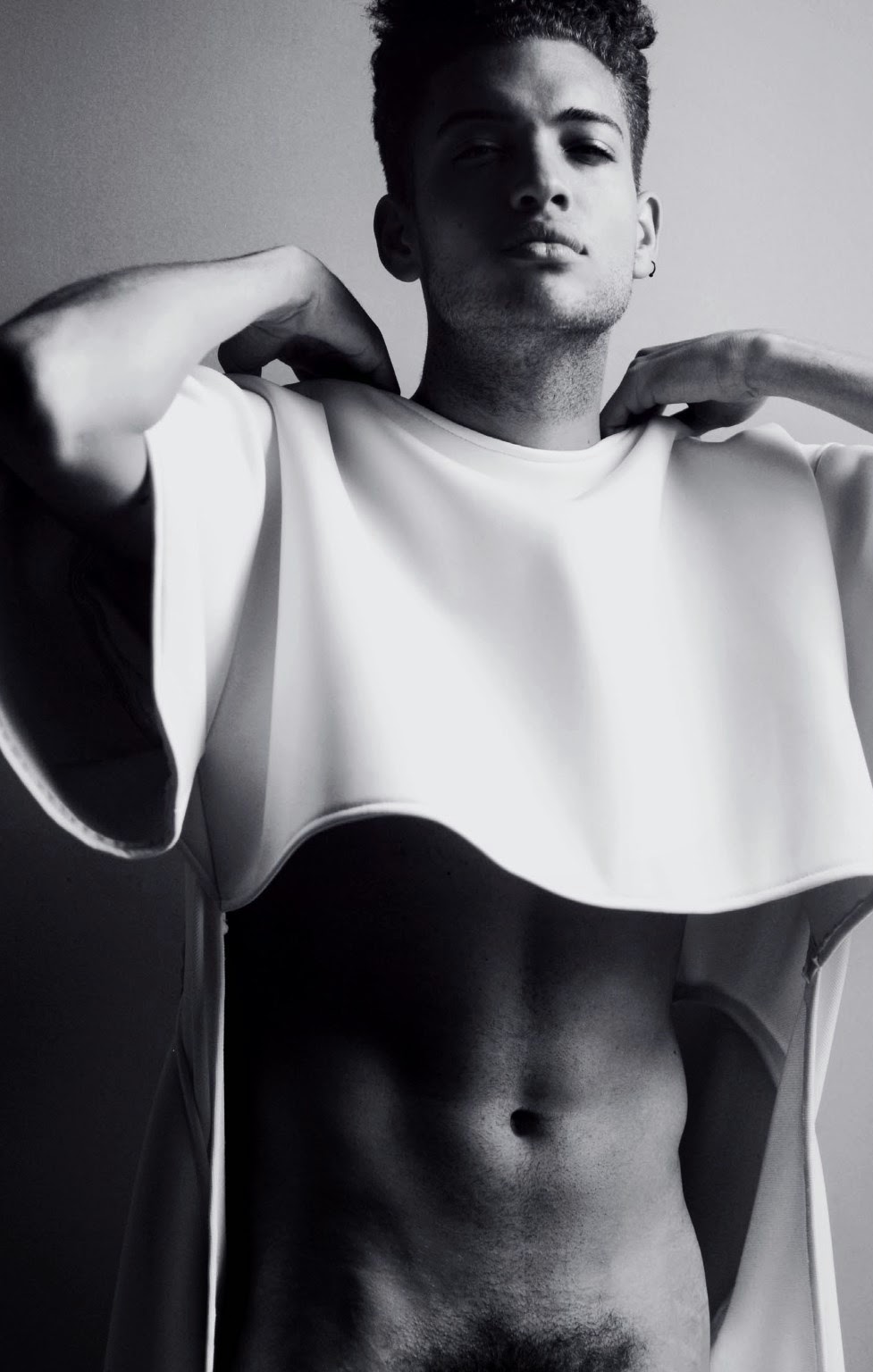 As someone who wants us all to be on equal footing in the range of our apparel options and voices, I see things like this as something that clearly needs to happen.  The sense of overt physical display that has for so long been utterly absent from menswear outside of sporting gear, has started to make its way into clothing produced with the idea in mind that it will move into commonplace usage.  Certainly not every man will want to wear a shirt that deliberately shows of his abs. But for those with the chutzpah, I say why not?  We have been presenting women as obvious sexual objects for a very long time.  Nothing wrong with men being presented the same way.  Sure we could say its a step backwards, this objectification of men as sexual icons.  Perhaps that is so on one level. On another its a frank exposure of men in the same manner as women, that levels the playing field somewhat. that, to me, is a very good thing indeed. 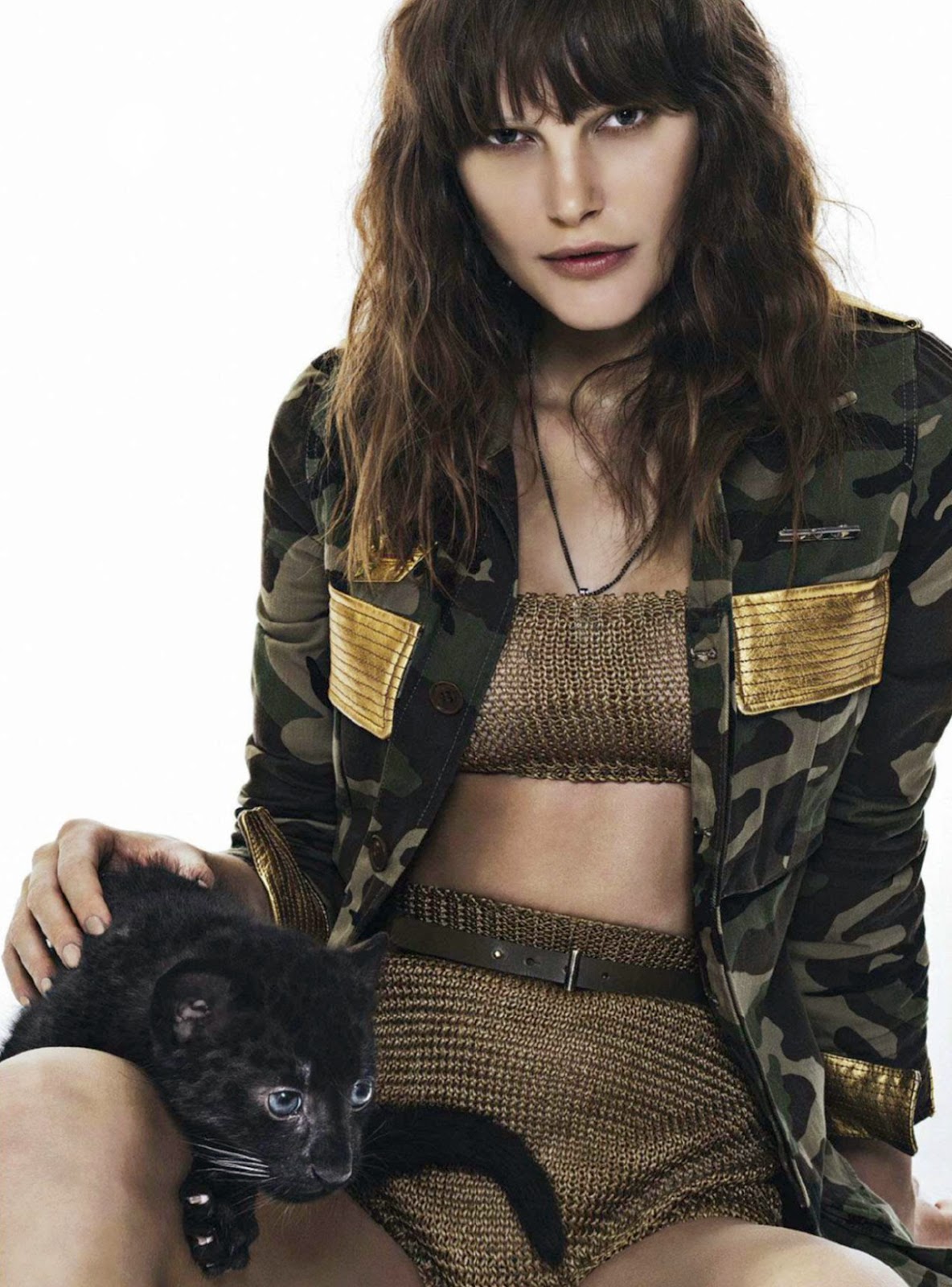 Tone is a major part of what gets communicated every time we dress ourselves.  We create, mostly without thinking about it much a certain defined coloration to the statement we are making.  Apart from uniforms, we rarely make utterly bald statements of fact, even when we have few options from which to make up our daily Attire sentence.  Take a good look at this image.  There is a complex message here, that has a depth of tone that is worth exploring.  I will leave it to you to discover what you may.  Suffice it to say that I was intrigued by the combination of metallic knit mesh and camo. The scraps of gold leather add something to the expression as well. 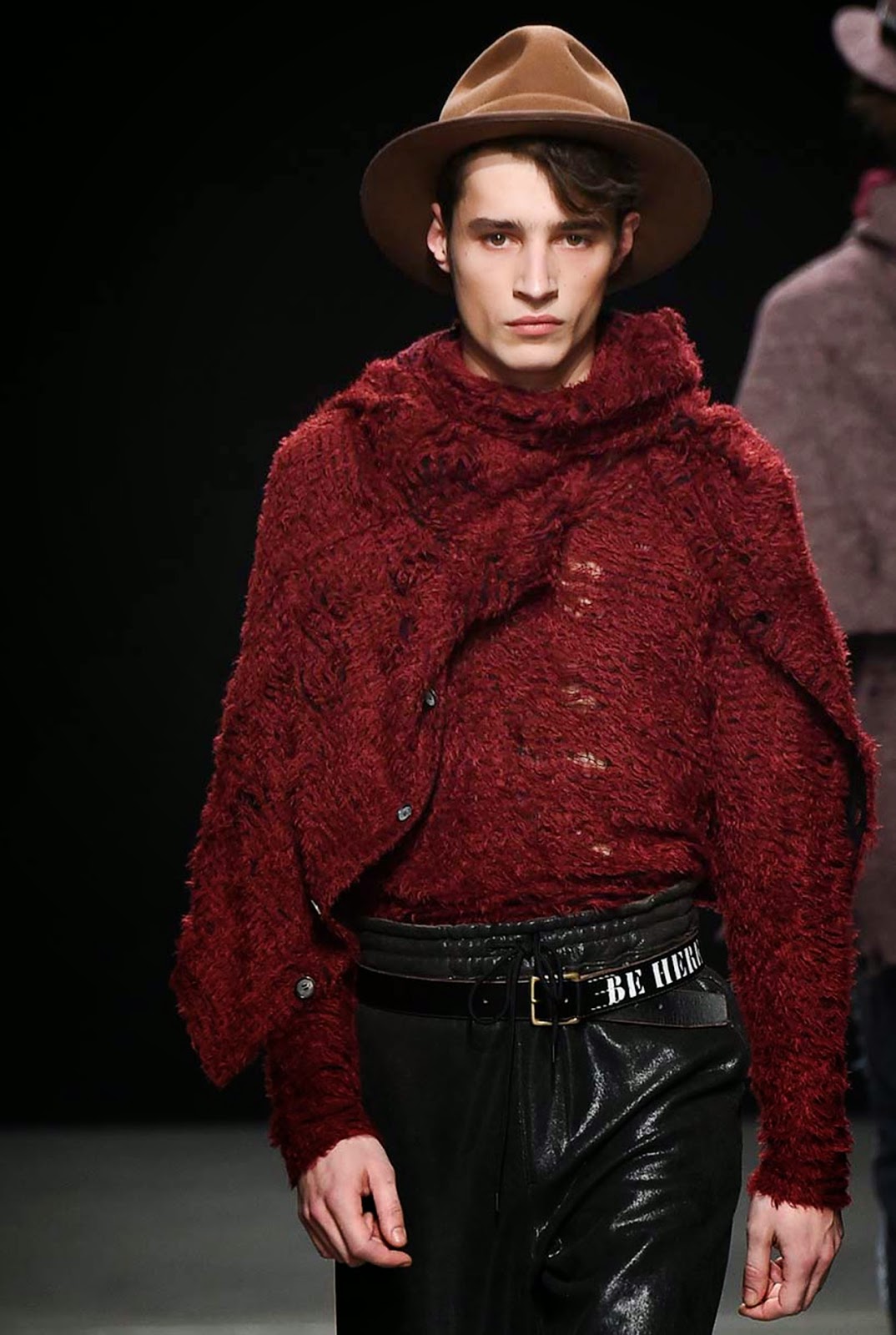 Computer controlled knitting machines have blown the lid off of what is possible to do, allowing a complex randomness to happen in knitwear that is entirely new.  Hand knitting such work would be hugely labor intensive, but with a computer to program the pattern, and the speed of knitting machines this sort of oddly naturalistic texture becomes a possibility.  I also love the cowled cape sweater set idea.  Its a new word variation for men.  Bravo to designer Miharayasuhiro. 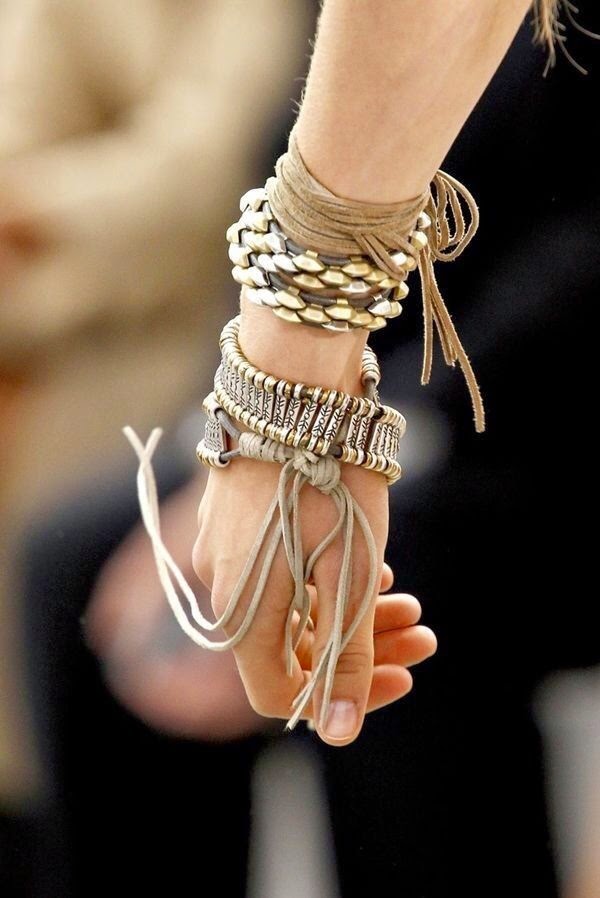 I know many people who wear jewelry of this sort routinely.  But few of them really understand the nature of what comes with that choice.  We are on one level associating ourselves more with the natural world, because of the style of construction, and the materials, but we are also tying ourselves, quite literally to our ancient past.  This is by no means a bad thing.  Far from it.  Choosing to wear something like this can give a person the opportunity to daily reflect of where we have come from. its a small, and beautiful reminder of the depth of our human history, and the breadth of human creativity. 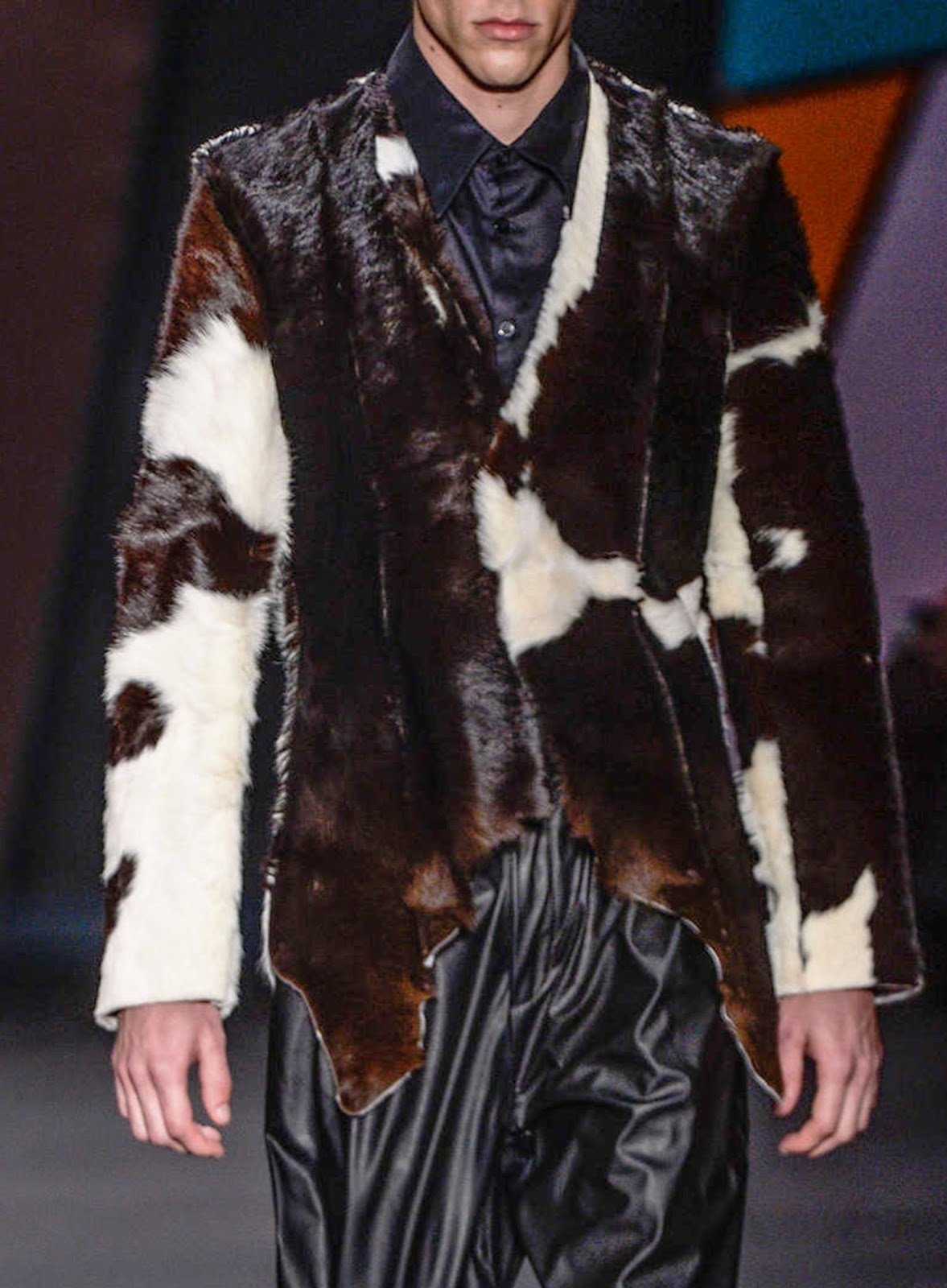 This effort, sent down the runway by Amapo for the F/W2014 collection, I must admit makes me uneasy.  I had to look at it a good deal before I was able to understand why I felt uncomfortable.  I've never been an anti-fur person. How could I be when I eat meat and wear leather?  But something about the deconstructed aspect of this hide coat disturbed me. It came to me that I was living with two opposing thoughts in my head regarding fur and its use.  A kind of internal hypocrisy.  One the one hand, I'm fine with fur being worn. What disturbed me was that the raw edge of the coat reminded me too clearly of its origin point.  So I had to admit that I was okay with fur, only as long as I could not see its source too clearly.  I have learned something about myself today.  That's a good thing. 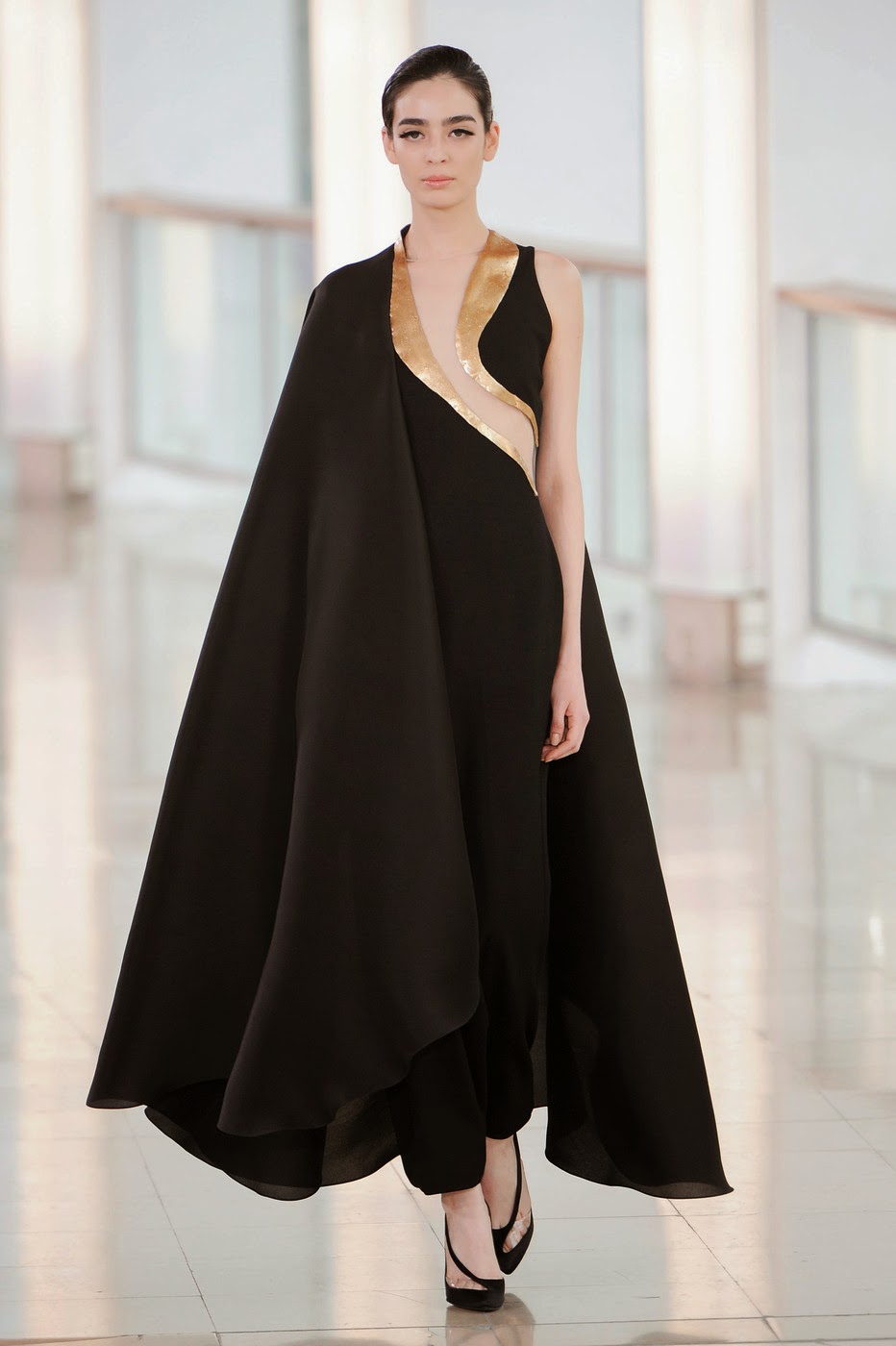 The moving sculpture that is this garment leaves me breathless.  The manner in which just the right amount of bareness, perfectly placed, balances with the gold sinuous lines and the huge volume of the black cone of the dress is perfection to my eye. Stephane Rolland, S/S 2015.  Nuff said by me. 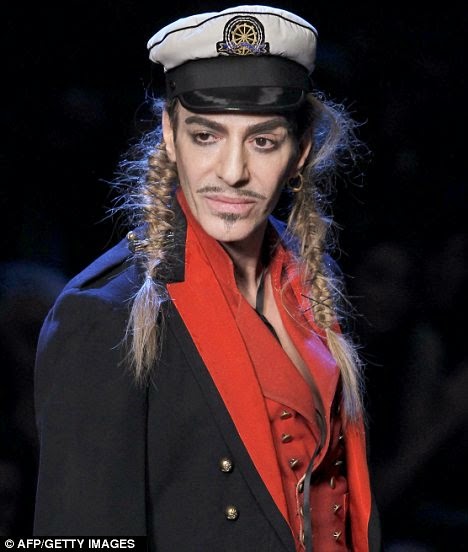 John Galliano.  I've had this image around for a while.  No, I wasn't happy about his drunken anti-semitic ravings. But here I'm just looking at the Attire statement being made.  There is a fierce drama to it, and a cheekiness that I admire.  I've always admired those with the cojones to get really out there in how they present themselves to the world. Whatever one may say about my Galliano as a person, it is his willingness to put his show fully on, for himself as well as for his work, that I like very much indeed. 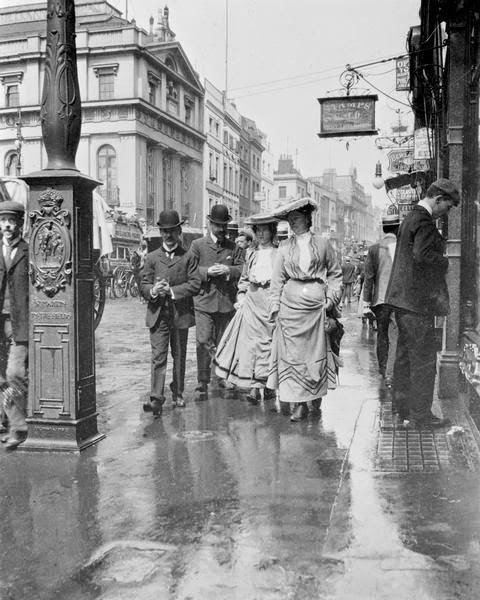 This is what it looked like to be in town, London, precisely, in 1900.  This is how one dressed to be in the city, and out of the house.  These are not stylish people. These are regular folk, going about their day. Yet the attention to detail is still in view, regardless of whether the clothes were off the peg, made at home or made up by a trusted tailor or dressmaker.  We have it SO much easier today. 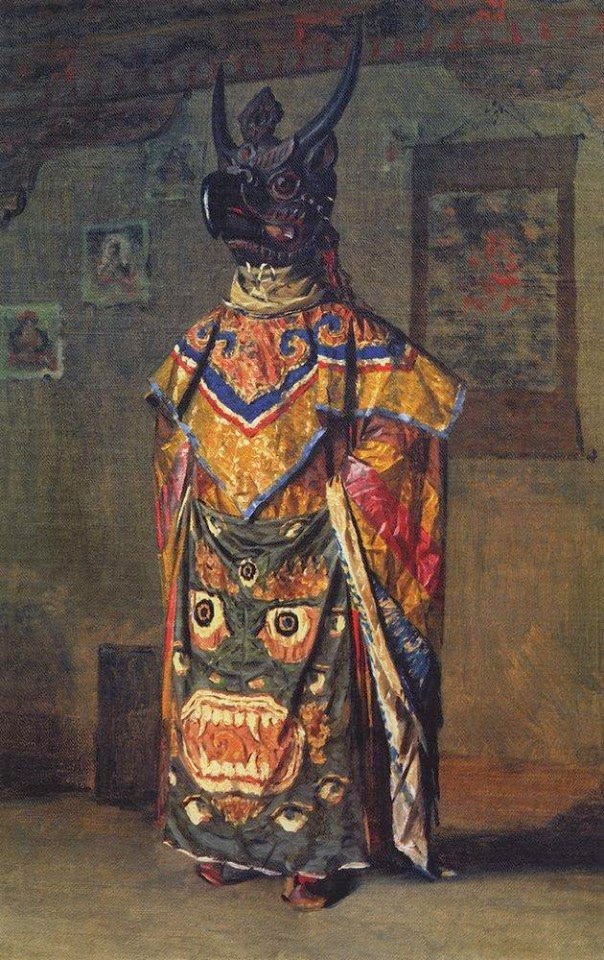 A facebook friend of mine posted this as being one of his favorite images.  I was instantly beguiled by it.  As an image that expresses to an extraordinary degree, both the desire to transform ourselves, and the level to which we will go to do so, this is one of the best I've seen. Human obscured, and changed up into a bird beast god creature.  Making of ourselves into something we perceive as divine is as old as we are.  It was very likely one of the first ways we attired ourselves.  One of the first reasons we chose to do so. As such, images like this have the power to leap past all our personal boundaries, taking us to some inner and essential place. Our primate source point. 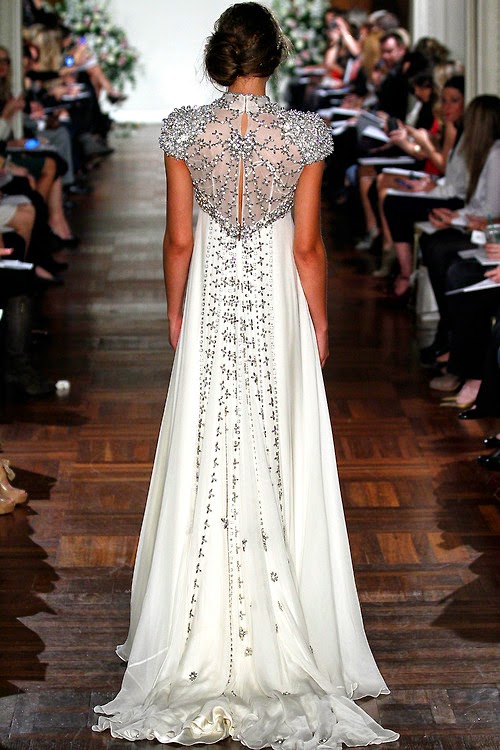 As a final bit this glorious evening dress from Jenny Packham.  What struck me is how vital it is to the design as a whole that the silver embroideries are placed exactly as they are.  Had they been done differently, the gown might not have failed, but its message would be entirely different.  The long lines of work down the back, fading out as they reach the floor only emphasize the shoulder line of this glorious piece of work.
Well, that's my share for this week. I hope you've enjoyed it.  Have an awesome, fun weekend all!
Posted by Paul G. Ellis at 4:09 AM