Betcha didn't think I had another one in me after that double wide Scatter just a few days ago.  I keep telling you all that my fevered little noggin is crammed with all kinds of stuff.  So, here we go again. 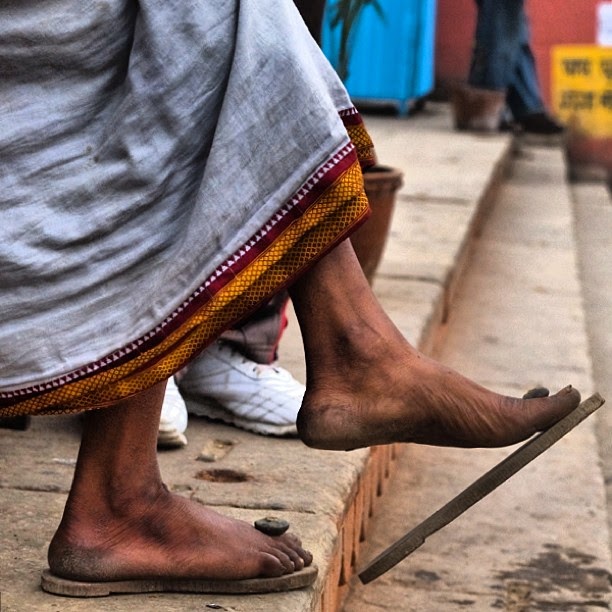 In Benares, they still wear one of the oldest forms of footwear known.  This simple wooden sandal has been in use for thousands of years, really ever since we understood how to work wood.  Someone all those years ago, might have gotten the notion by playing with a piece of wood laying on the ground that has a knob-like extrusion, and suddenly, AHA!  It makes me smile, really, to know that Attire ideas like this one, ancient as they are, still find their use today. 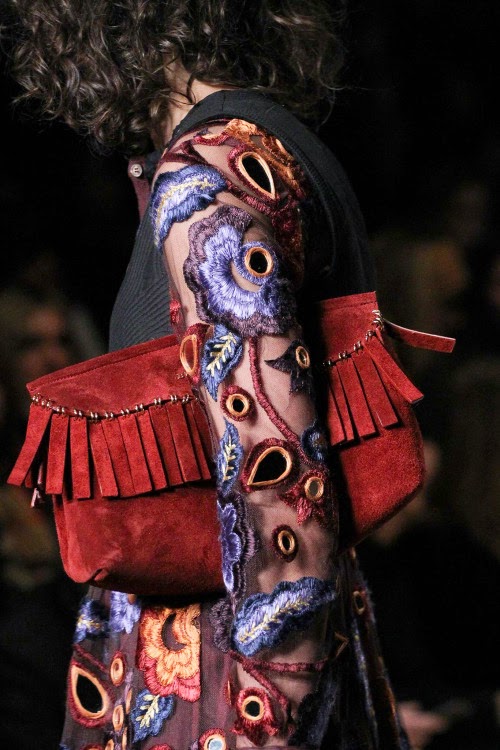 I've posted plenty of images of fantastic embroideries and beadwork. This took my breath away.  On a ground of a single layer of organdy this pattern has been created in silk floss and pieces of mirror.  Doing this much work on such a fine fabric, without damaging or distorting it takes master level skills.  And the result is something of such loveliness that there aren't really words for it.  It is a wonderful thing that such craft still exists, and even if most of us could never afford it, that we can still appreciate it from afar. 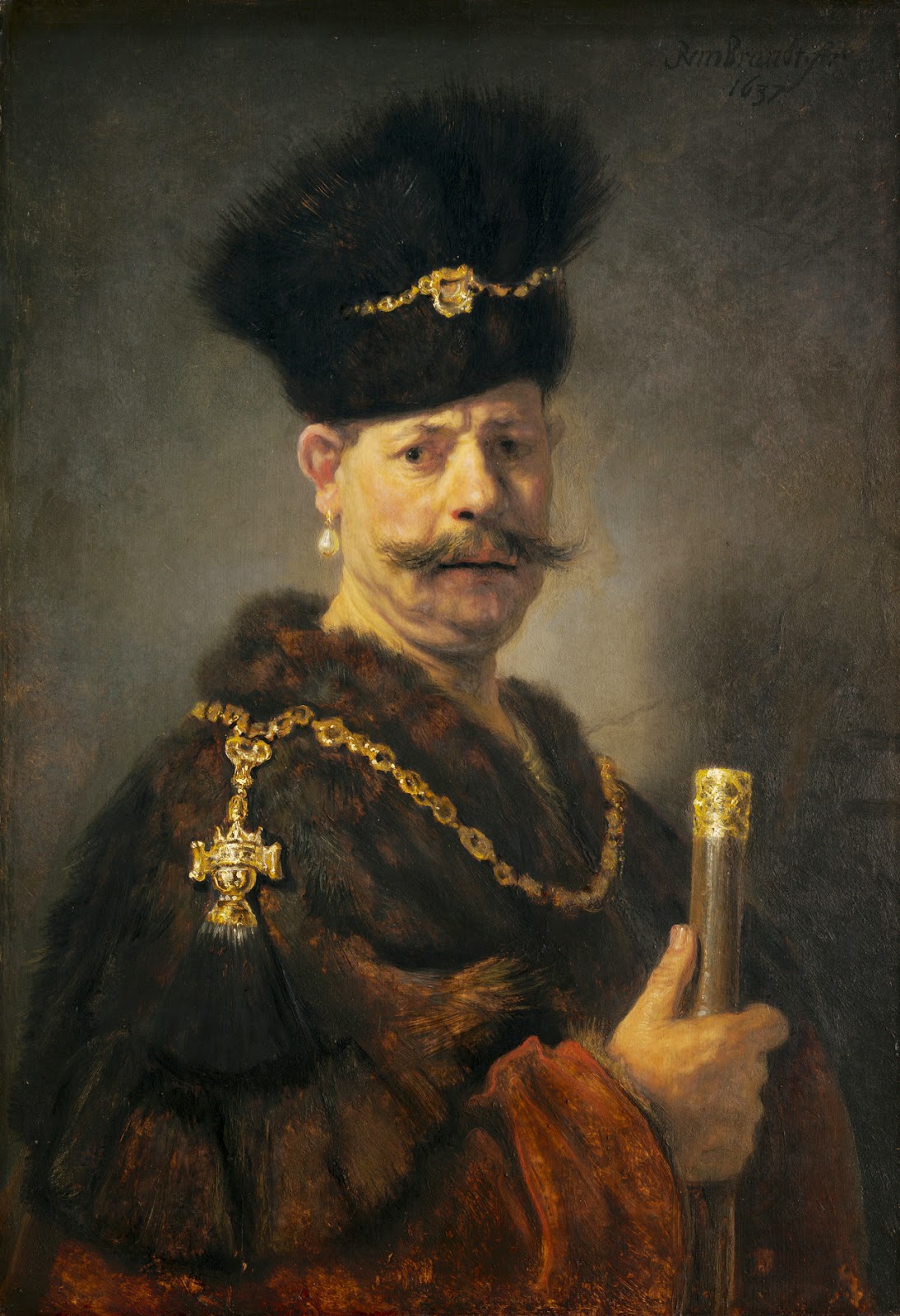 Rembrandt Van Rijn painted this portrait of a Polish nobleman in 1637.  Its the jewelry that caught my attention here.  Time was when a man was able to wear great quantities of jewelry, and it was not considered a social misstep, nor was it a negative comment about his perceived masculinity.  So this gentleman's large pearl earring, and the jeweled chain with coat of arms in his hat are by no means an overstatement.  And the large chain of office over his shoulders was a commonplace thing for people of wealth and station at the time.  It really only fell out of fashion in the later 1600s, when such orders of office became relegated to state occasions only. 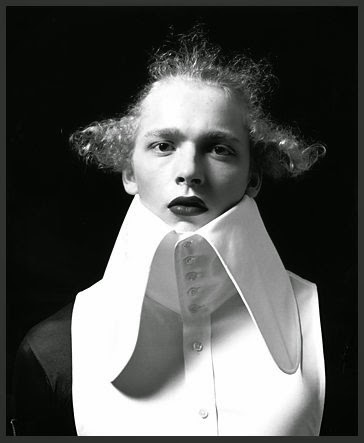 I've had this little item banging around in my files for a while now.  And I'm still not quite sure why I find this so compelling.  Perhaps its the blurred gender thing. Perhaps its the absurdist scale of the collar, or maybe the wacky hairdo.  Actually, its all those things in combination, working together that makes this succeed for me.  Its this kind of playfulness with proportion and sensibility that I love a lot.  We get a wonderful combination of wicked dissipation, ennui, and enslavement to respectability all in one go.  Or at least, I do. 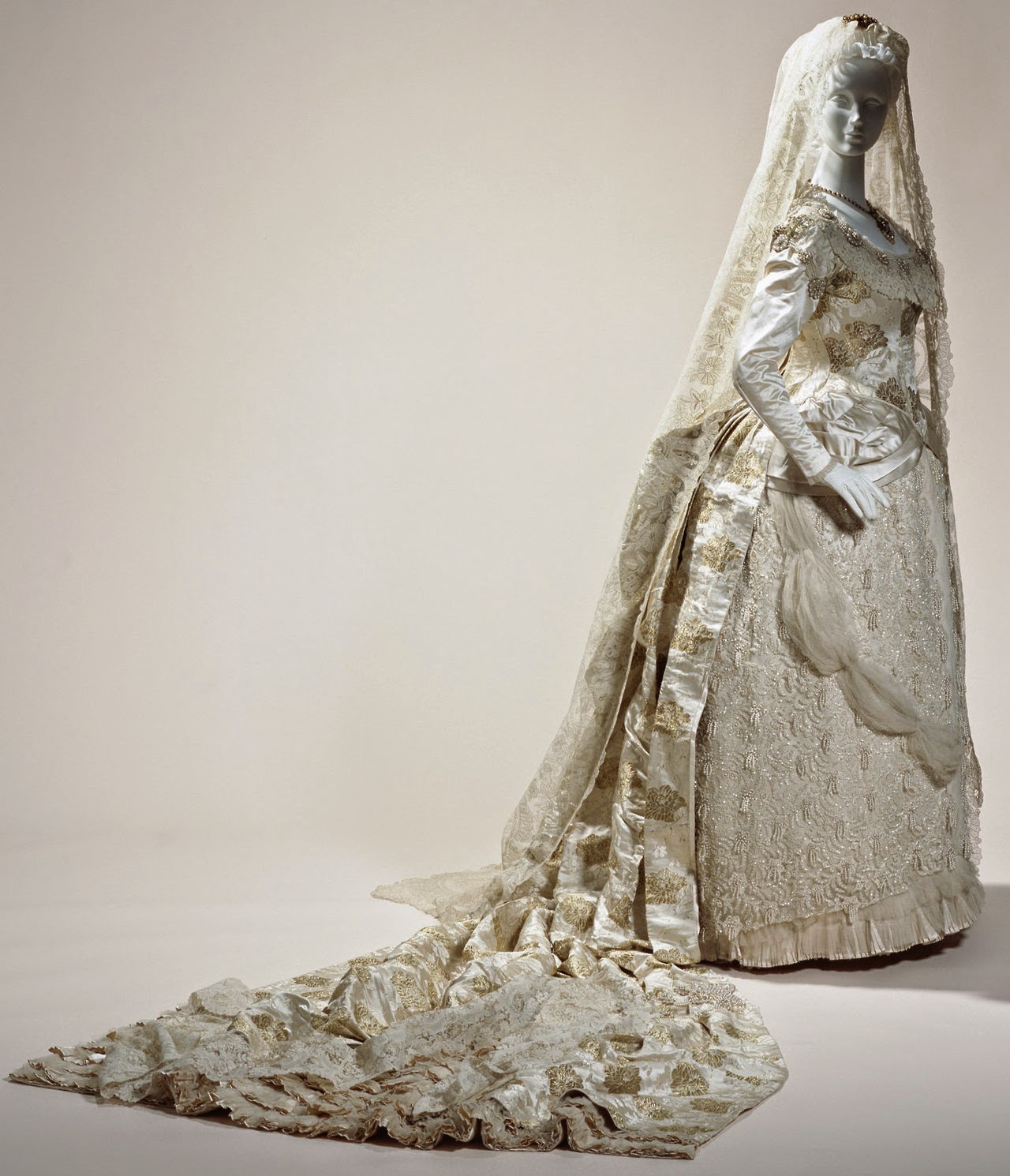 By 1882, when this luxe garment was made, the white wedding dress was well established as the accepted mode, whenever finances allowed.  This one is up to the moment fashionable.  The over dress is a white and gold silk brocade with a pattern of flowers, that continues into a significant train that has areas of pearl beading.  The under skirt is white silk pongee, and silk tulle, with an overlay of lace that has been embroidered with tiny pearl tassels, with beads, and with brilliants, and that further embellished with a swag of tulle arcing over it.. The corsage and sleeve heads are also embellished with pearls and brilliants, and the huge veil is Honiton lace.  This thing must have cost a fortune, but I bet she felt like the queen of everything. 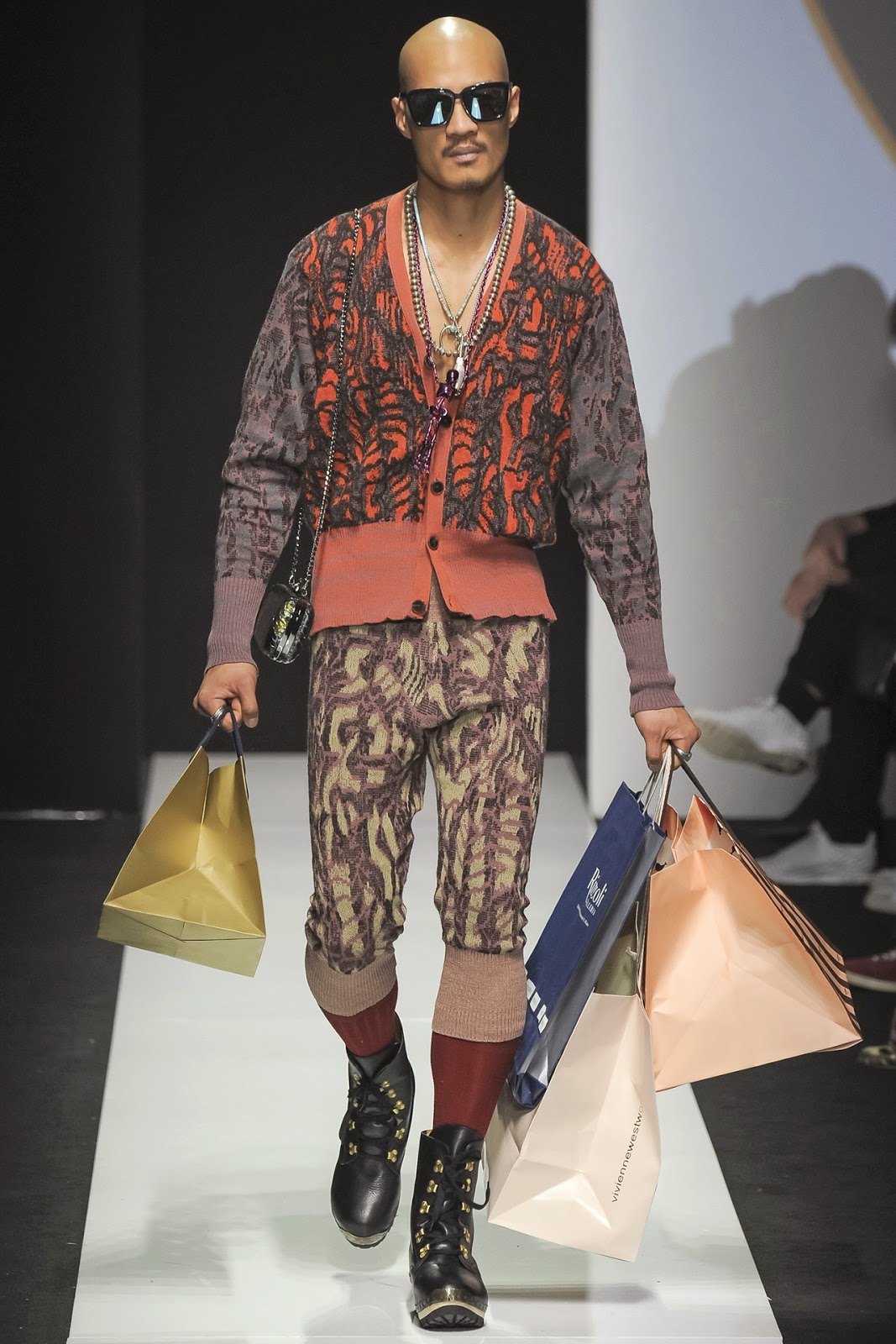 There are a number of things here that got my attention.  First is the master level mixing of patterns. They all work together because they have similar scale and rhythm.  The second reason is the oddity of the color combination.  All strange hues and all working together.  The third thing is that silly little shoulder bag, which just made me snicker.  Here we have a pretty big guy, work boots, sunglasses, rocking the neck chains, carrying this teensy little bag barely big enough for his phone.  My but things are changing fast, no?  Leave it to Vivienne Westwood to show us the way. 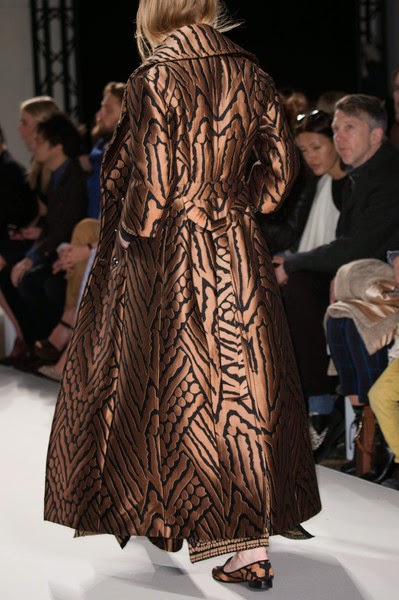 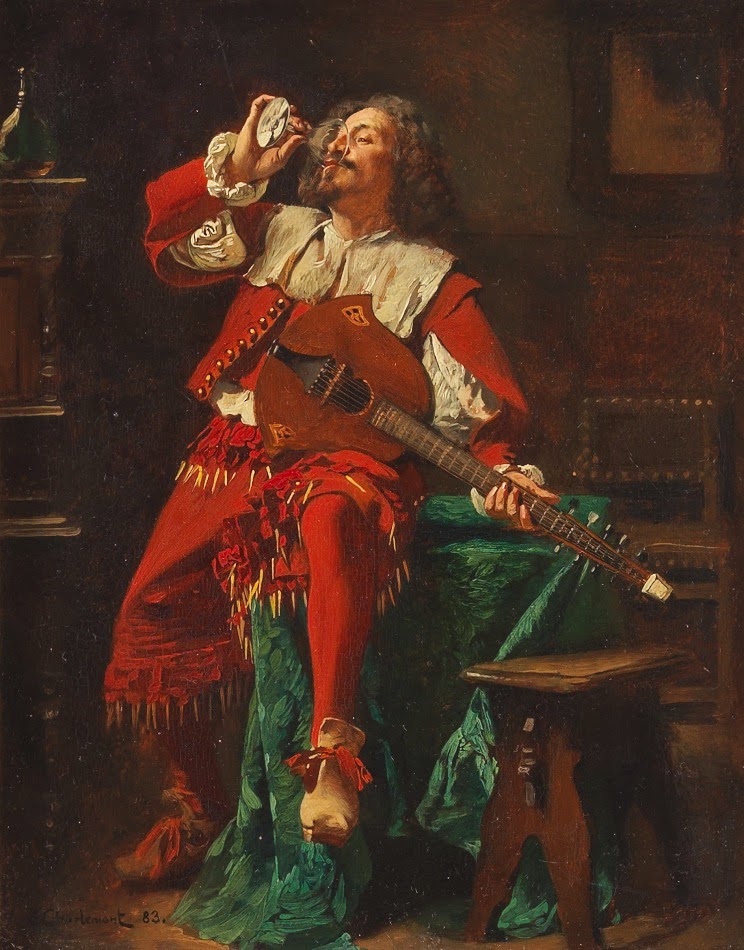 Eduard Charlemont did this painting, The Cavalier, which caught my attention, because its a pretty darned good representation of what a foppish sort of fellow would have been wearing in the days of Louis XIII.  In particular, the odd short cropped jacket, which was short enough to show the white of the shirt at the waist, and the abundant number of ribbon ties, each with its metal point, adorning both the waist and the hem of the breeches.  What makes that interesting too is that by this point those ribbon ties performed no function whatever, though in prior times they held the doublet and breeches together. 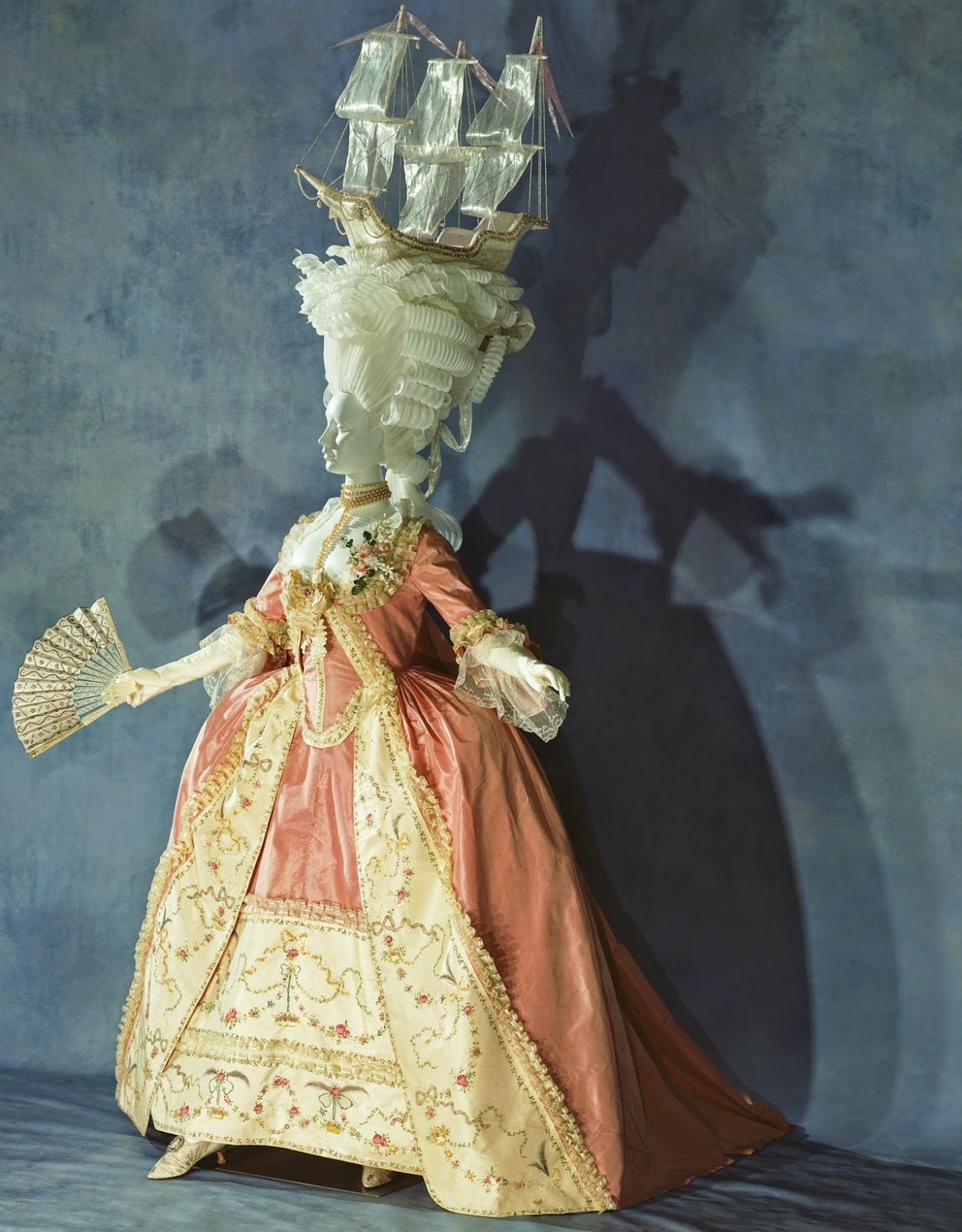 This lovely little item is a part of the collection at the Kyoto Costume Institute in Japan.  Part of what makes it interesting is that the big panels on the front of the skirt, and on the under-skirt are not embroidered, but hand painted.  It was a fashion that swept France in the last years before the Revolution changed everything, but like so many of the fashions of that time, it was short lived.  This would have been for less formal evening occasions at court. The wig and headdress are designed to copy an infamous hairstyle of Marie Antoinette's, suggested to her by her hairdresser Monsieur Leonard. 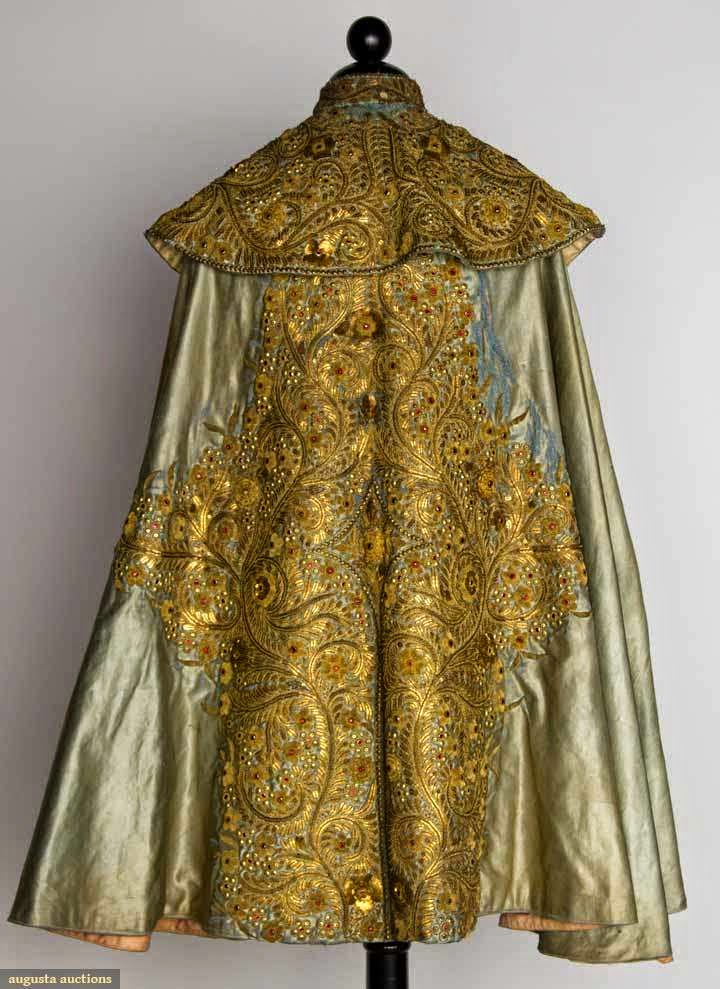 This 18th century matador's cape was sold through Augusta Auctions some time ago.  Its a remarkable example of how deeply formalized even our entertainments can become over time.  The amount and quality of workmanship devoted to this garment, which was merely meant to be worn into and out of the arena by the matador of a bullfight, is exceedingly high.  It is a devotion to craft, and display rarely seen outside of the couture now, since bull fighting is no longer considered appropriate. 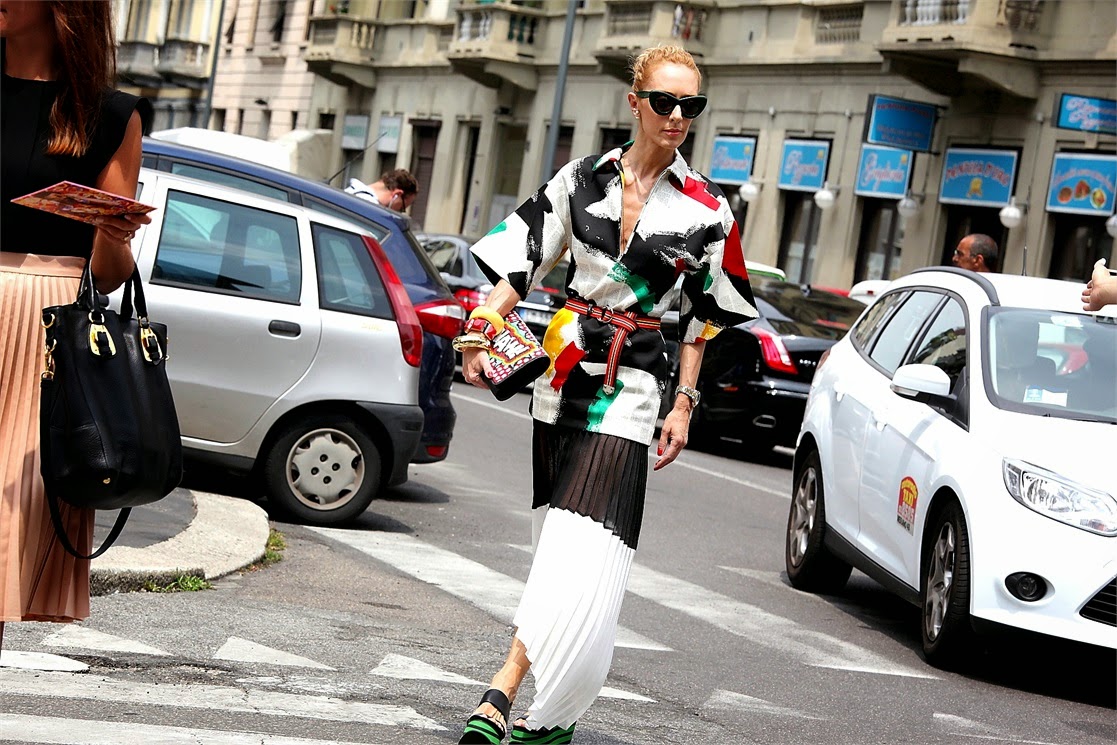 They say go big, or go home.  This woman was snapped on her way to an event during London Fashion Week.  I gotta say, I do love the juxtapositions going on here, in terms of texture, proportions and color.  What does this ensemble communicate?  Mostly it says I Am Fashionable.  But, when attending a fashion week event, that's the best goal to go for.  And the bar is pretty high, so going a deal further than normal is just fine. 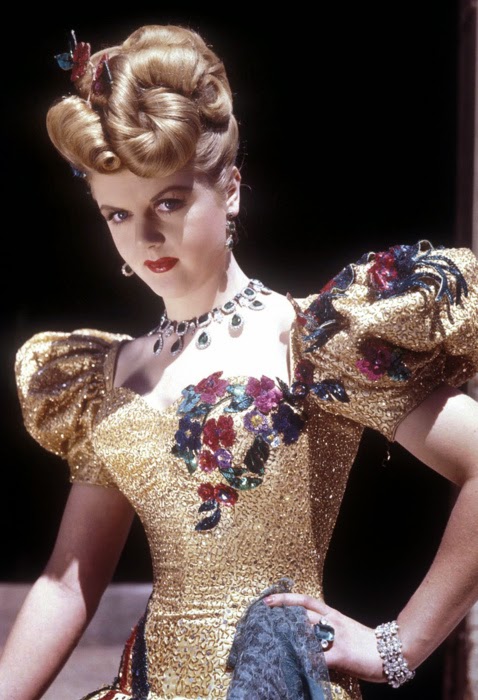 And speaking of going a deal further, let me finish up today's edition of Scatter with this studio shot of Angela Lansbury in her role as Em, from The Harvey Girls.  Her character is supposed to be a hardened saloon girl/entertainer working in a tiny town in the west.  Somehow she manages to get herself dolled up in an outfit that would have cost a major amount at a couture house in Paris.  Girl must have been handy with a needle for sure to make this herself.   And of course her hairstyle owes nothing whatever to the fashions of 1895, and everything to 1946, when the film was produced.  Sometimes the exaggerations of the film community just make me smile for their absurdity.  (snarky side note. I love that there's clearly a loose bugle bead hanging from a thread under one arm in this picture)
Well, that ends another edition of Scatter.  I hope you all have a Grand Weekend!