The week's wheel spins round and brings us right back to Scatter time.  Once more into the cobwebbed corners of my fevered brain! 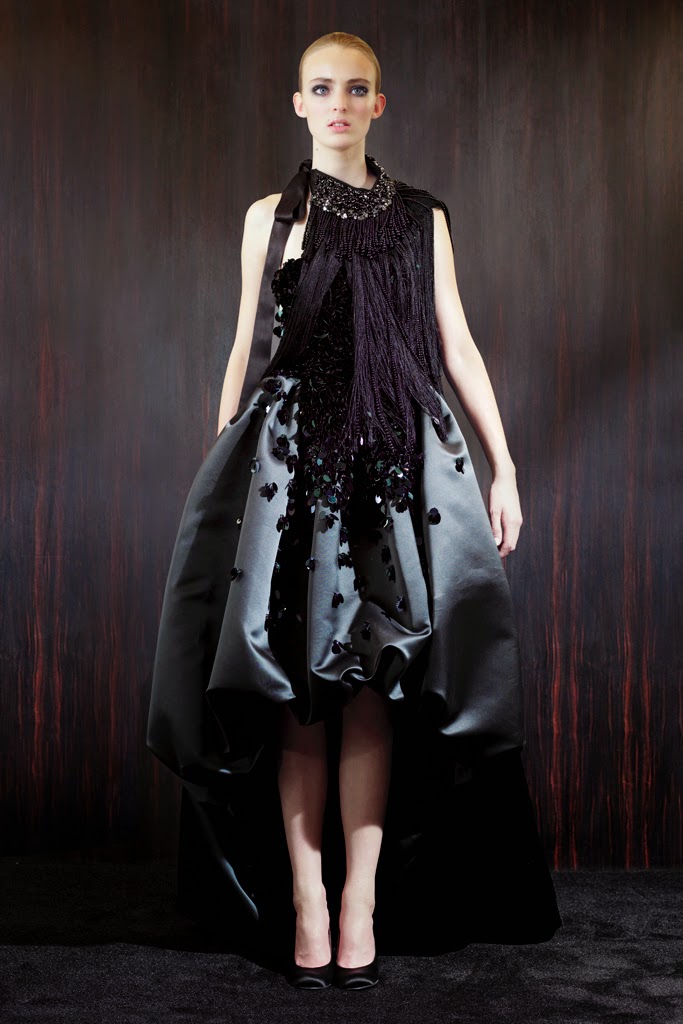 This Prada couture is from 2009.  I thought it was worth sharing because it really shows the kinds of juxtapositions we are willing to experiment with as we move further into the 21st century.  In the endless search for the new, we are finding it often needful to take established forms and combine them with things unrelated to them.  In this case we have a dress with the upturned, and puffed out ascending hemline, first ventured out in the 1950's.  Then there are the huge scaled scattered decorative bits on the skirt.  The dress itself would be less remarkable,  without the odd fringe capelet.  It gives what would be a less intensely modern creation a new voice to speak with.  Plus I like the interaction of the various unexpected textures. 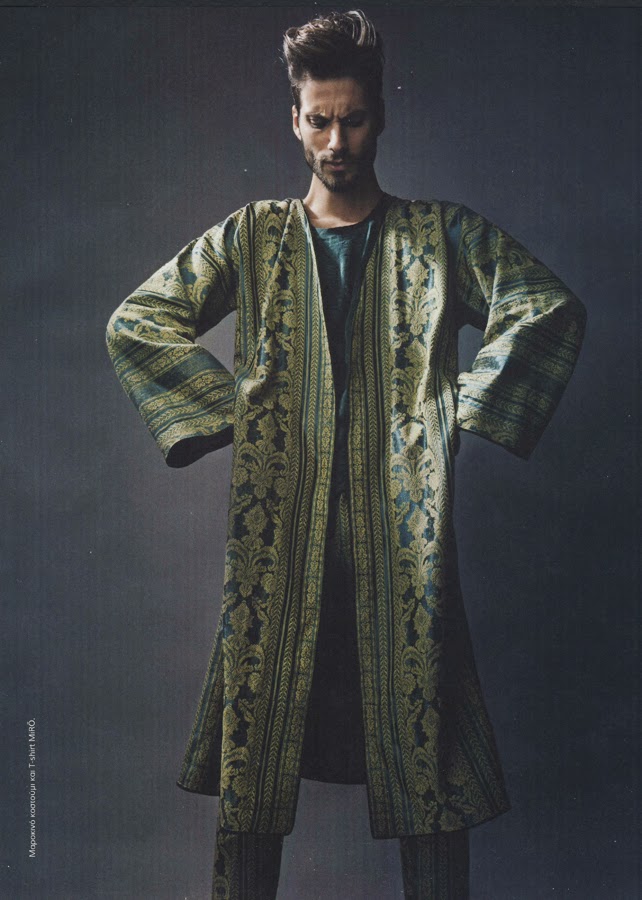 This is one of those kinds of classic garments that is worn in many different countries, routinely, and it baffles me that practical and attractive as it is, men in the western world just don't go there.  I would love to see this simple shape coat make its way into the common parlance of western men's Attire conversation.  It could be made up in nearly any fabrication, decorated or not to taste, and by the addition of multiple interior pockets be enormously practical, as well as usable by any body type.  Course, this one appeals to me for its Indian inspiration, and I do love me some Indian textiles. 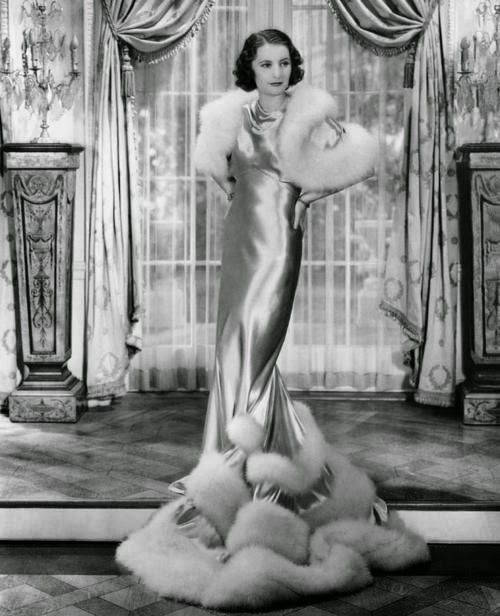 I've been chatting the past few days here about the search for perfected beauty.  Nowhere is that more in evidence than classic Hollywood, where endless amounts of effort and time were expended to make people who were often only really middling attractive, into god and goddesses.  Here we get a good long gander at Barbara Stanwyck, as clothed by Edith Head for a film called "Gambling Lady" from 1934.  Head, who was, if not technically brilliant herself, was still an adroit designer with a keen eye.  She saw Stanwyck's shortcomings and made them disappear through careful cutting and detail placement.  Stanwyck had a rather long torso, with a low waistline.  Head often, as here, erased her waistline and placed all the attention at top and bottom, allowing the viewers mind to even out the figure in between.  As a side note, considering the weight of that duchesse satin in use, plus all that fox fur, that dress must have weighed a ton and been hot as blazes. 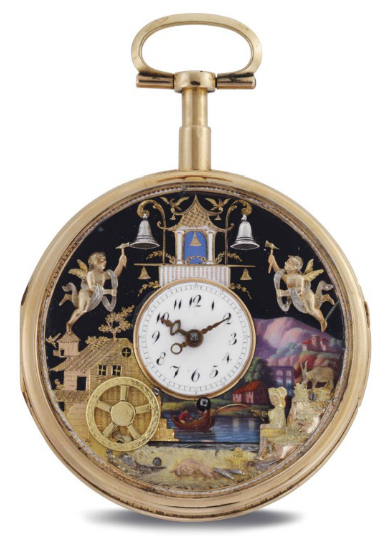 We think of watches as essentially decorative accessories now, but that has been true practically from the beginning of them.  Pocket clocks that could be worn came into being in the earlier 16th century.  They were from the first, highly decorative objects, and that remained the case into the 20th century, when the need to know the time became so widespread that mass production ensued, which required simplifying the styling considerably to make them affordable to more people.  This watch is from 1850, and its a great example of how decorative, and complex pocket watches became.  This one with its mill wheel that turns as a second hand, sublimates the need to read the time, to the evidently greater need to be beautiful.  A gentleman was assessed in part by the type of watch he carried.  This one is rather foppish, and would have raised an eyebrow or two. 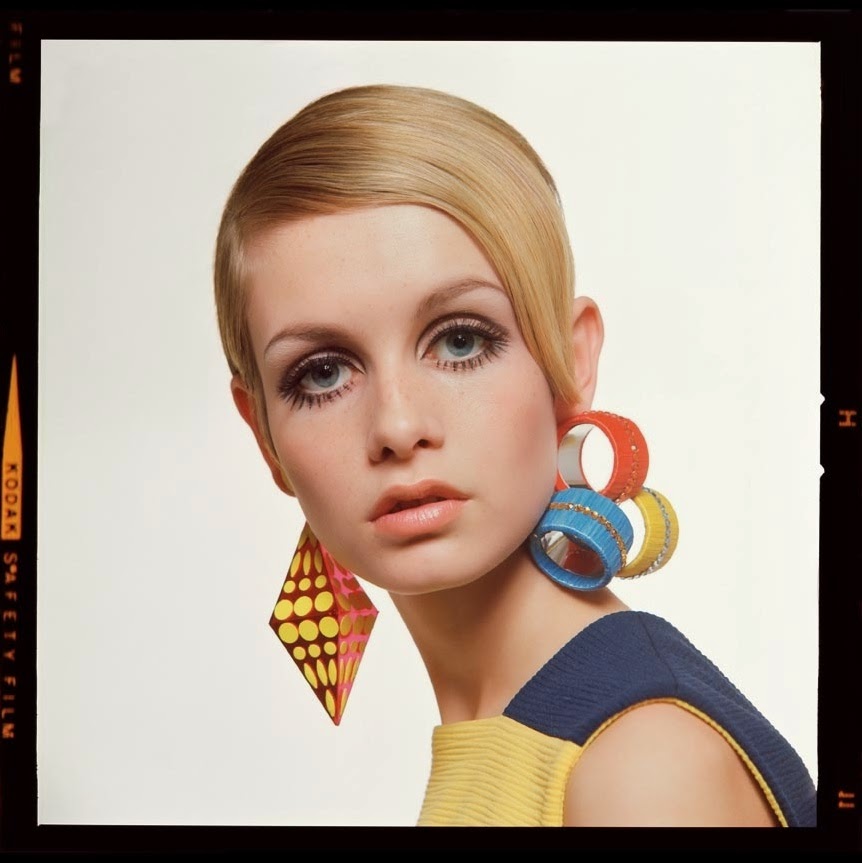 The face that changed how we thought about fashionable beauty in the 1960s.  Younger, slimmer, and more waif-like than most other models, Twiggy changed how we perceived.  Or rather, she was the physical embodiment of the internal social changes that were shaking the culture.  Where models had been styled, even when modeling clothing for teens, to look very adult, Twiggy look was in some middle zone between adult woman, and child.  Pair her with the primary colored clothing here with its simplistic shapes, and there is suddenly an entirely new imagined ideal that takes shape in front of us. 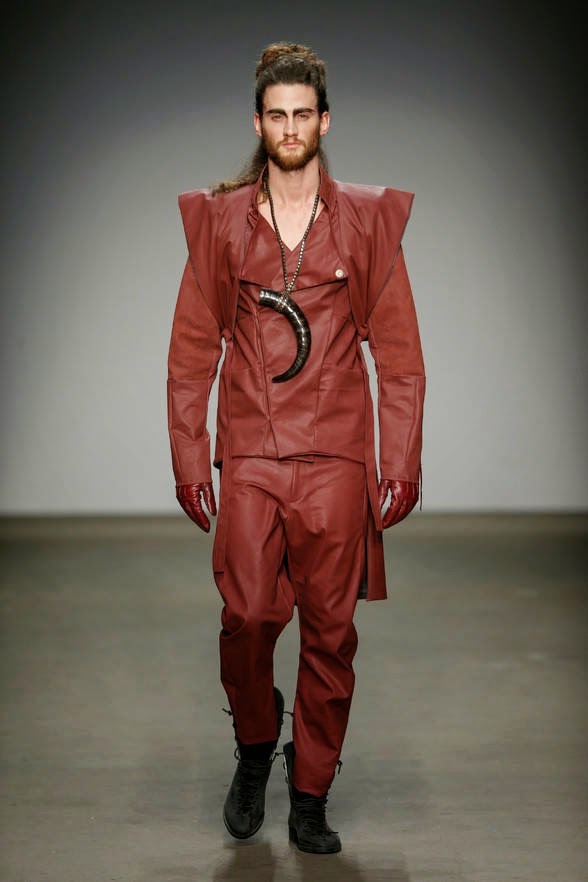 Oh, here he goes with his avant garde menswear thing, again.  I know. I talk about this a lot. The reason is that the majority of really revolutionary avant garde work is happening in menswear.  This leather suit is by Netherlands designer Mirte van Winjgaarden, from the F/W 2015/16 collection.  The play on traditional menswear tropes of broadened shoulder line and deliberately narrowed hip is a good one.  I could see a scaled back version of this jacket selling like crazy.  So as a design experiment, I think this one is a win.  Plus, that odd color of leather would actually be flattering to a lot of skin tones.  Sign me up for one of these! 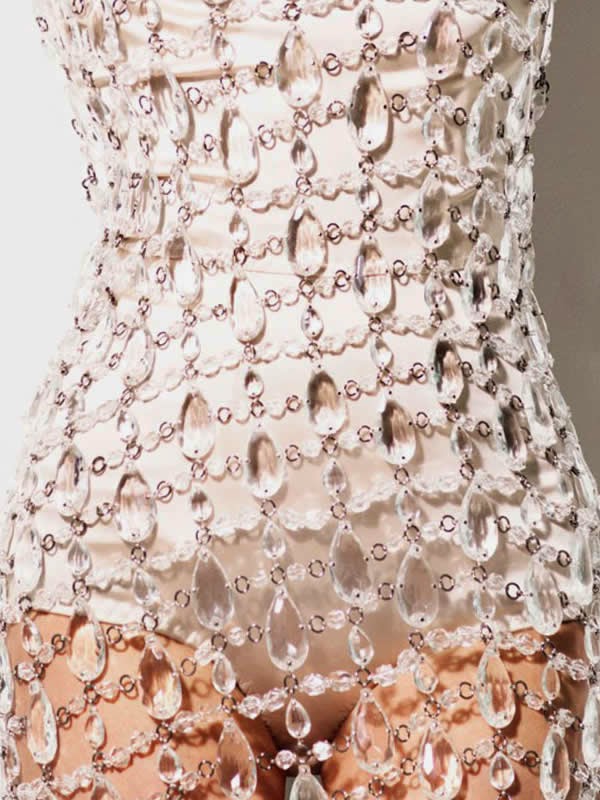 Occasionally, something of this sort comes into my view and its just so silly/beautiful that I can't stop looking.  Of course this is an utter absurdity.  No matter who you are, apart from being on stage, singing with 20 back up dancers, there is nowhere where this would seem right.  And entire dress that is basically just crystal beads in a chain mesh, with a white maillot under it.  Smile provoking fantasy, but unwearable off a runway, and that's just fine. 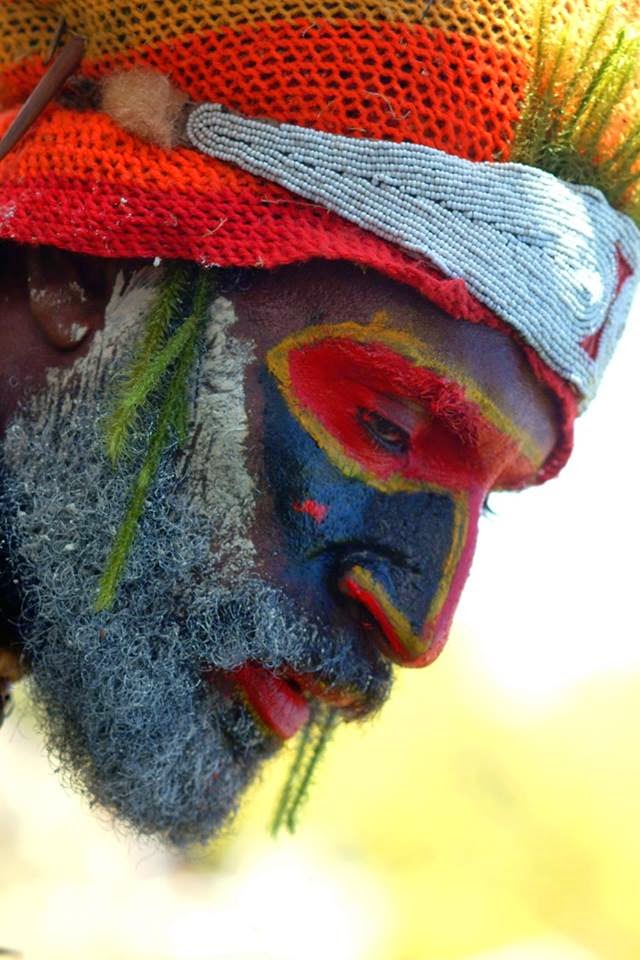 I have remarked about this sort of personal transformative action before.  This image sent me to the moon.  With so little, most things found, and of the earth, this man has become a synthesis of human, and god.  This kind of thing, this desire to make ourselves something other than we observably are, predates our written languages, and may very well predate real spoken language as well.  It is one of the truly primal urges we have, and we have never even tried to let go of it.  We continue to do so daily, and this blog would have no reason to exist whatever, without that single great desire. 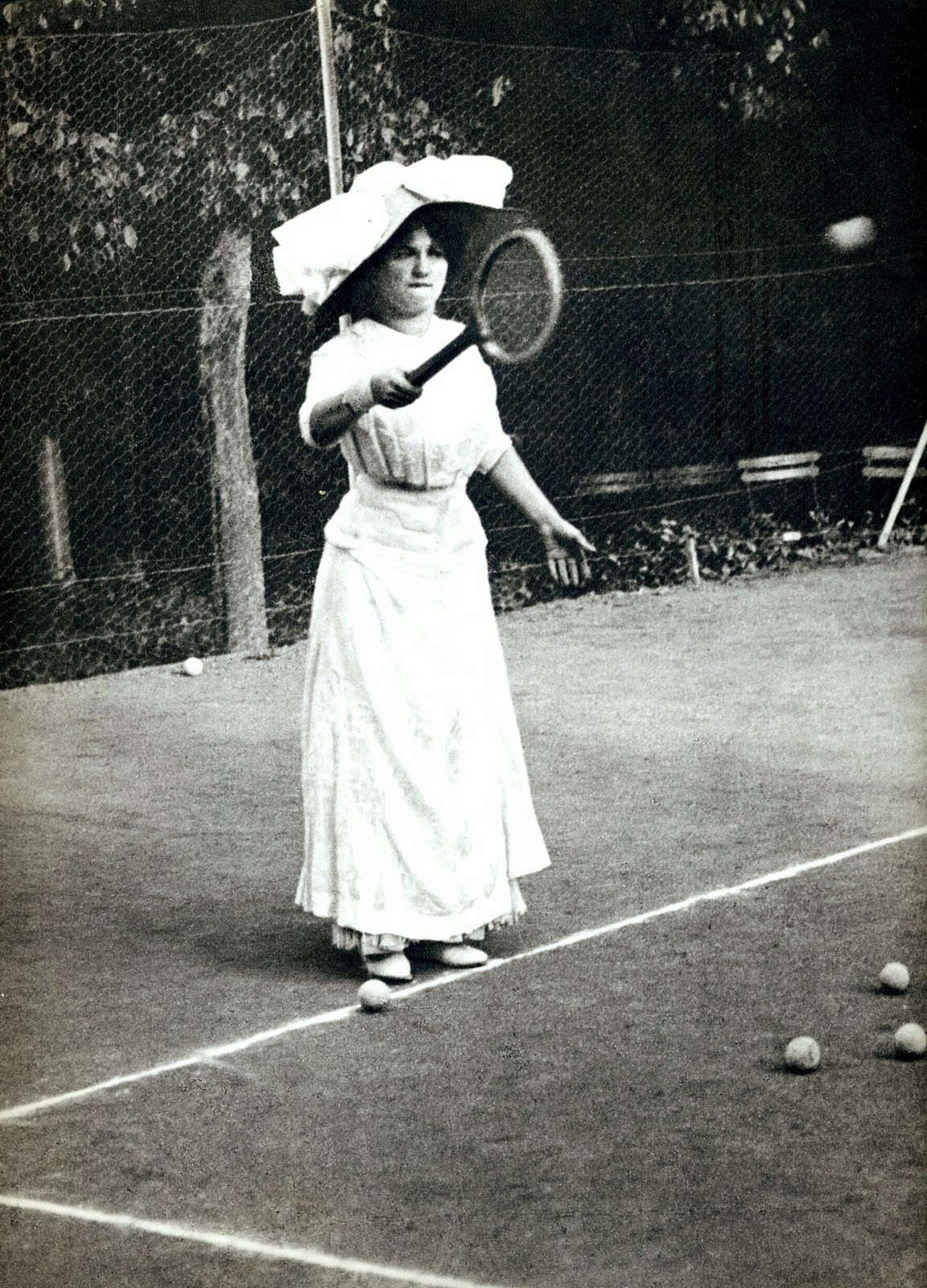 Women started being allowed to indulge in sportive activities other than horseback riding about the second half of the 19th century, when cycling started to gain popularity.  Soon after, other sports followed, and yeah, tennis began to be enjoyed by women.  Though, as this image presents, playing tennis for ladies was still a largely stationary pursuit.  Hampered with long skirts, a gigantic hat, and even wearing a corset, ladies still had to wait till the 1920s, and 30s to be able to engage fully. 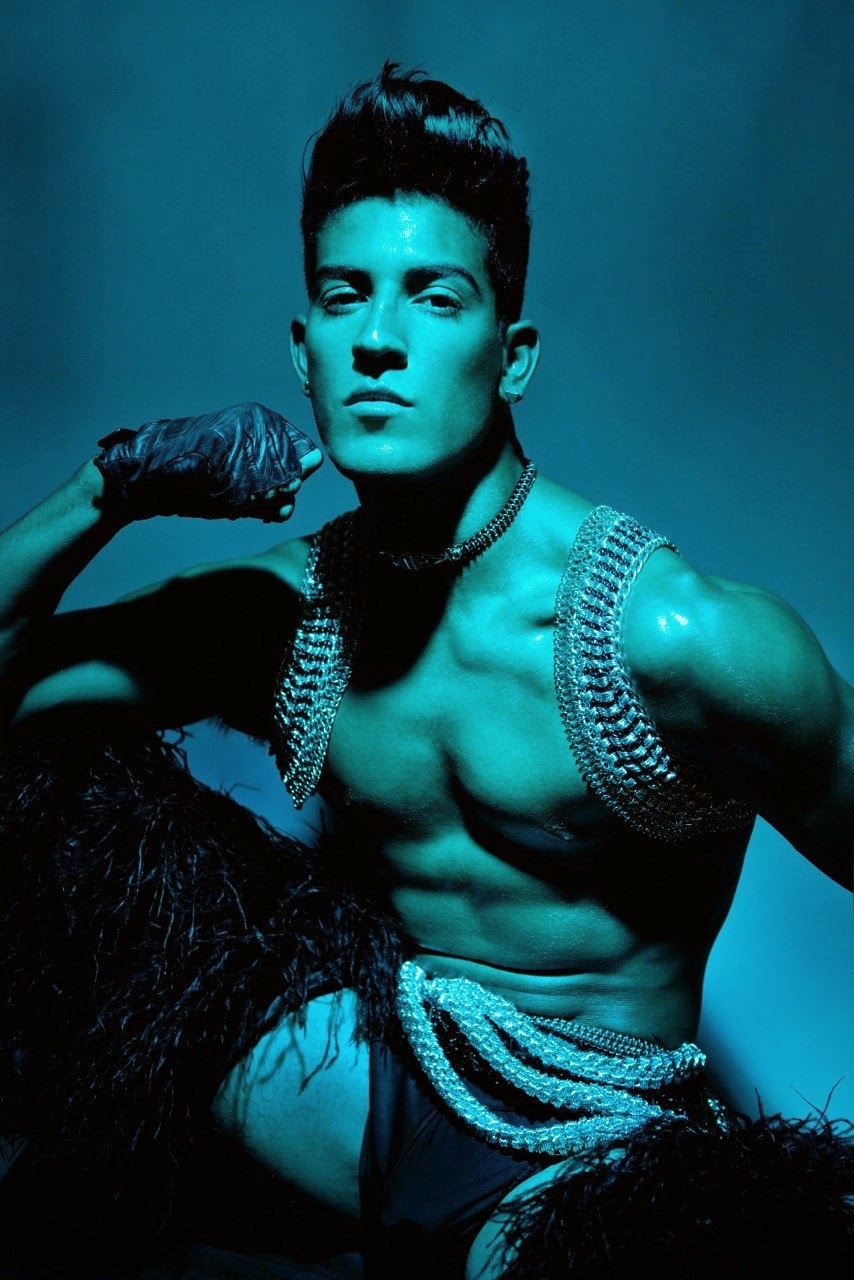 This image was most likely intended to be an erotic one primarily.  But, with my brain going the way it does, my eye went right away to that unusual placement of jewelry.  Those two bands encircling the arm right at the armseye really grabbed my attention.  I started right off musing about the inclusion of jewelry of this sort for men, in particular, but for anyone else, really, as well.  I could see something like this designed to be worn over jacket or shirt sleeves, or even with a tank top.  Varying the materials and coloration could give this broad spectrum usage.  Hmmmm, I may just have to experiment with this. 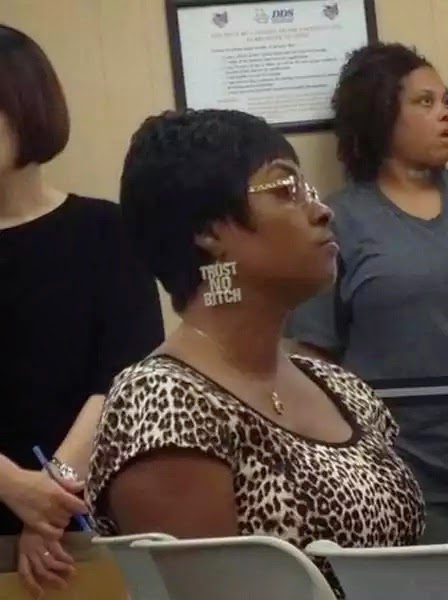 My sweetie shared this picture to me, and I HAD to pass it along.  There are statement pieces of jewelry, and there are statement pieces, this is a quite emphatic one.  One of the things that happened in the 20th century that made it different from other times was the expansion of using actual text in our clothing and accessories.  It has become so all encompassing that I doubt there is anyone who wears western culture clothing that does not have at lest one thing with words on it.   Sure, the use of text in Attire is nothing new, it is only the extremity of its pervasiveness that has changed.  And what, exactly, does that say about us as a culture?  Do we find ourselves unable to say enough with our words, so we must add to the dialog elsewhere?  Or is it that we are so inundated with input from everywhere that we feel we must give some thoughts and feelings extra emphasis? 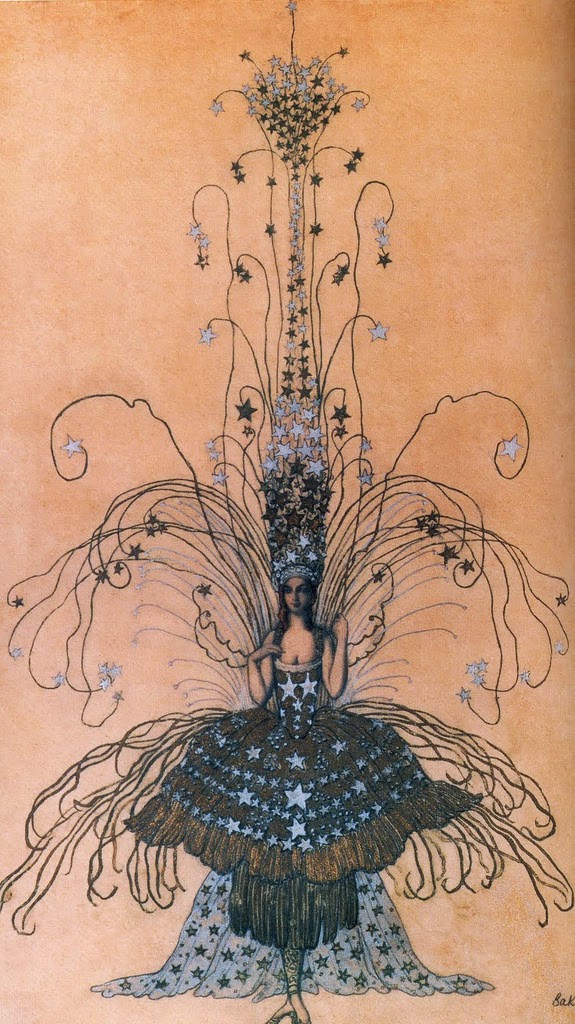 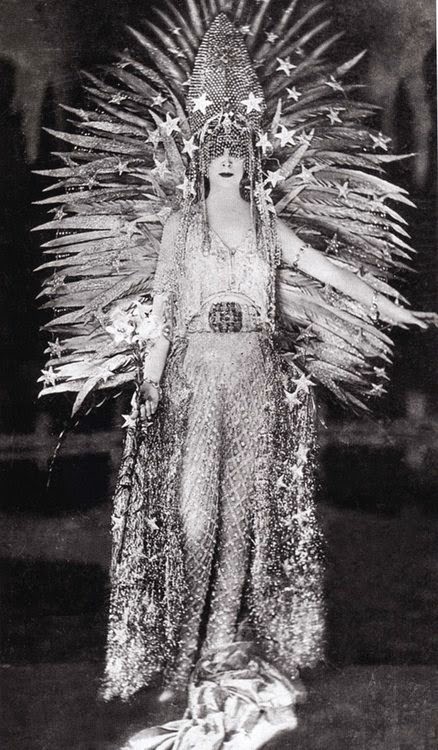 And to close out this tour of the inside of my head, this costume design by Russian theatrical designer Leon Bakst.  Mr Bakst made his name known by working mostly with the Ballet Russes at the beginning of the 20th century.  but soon spread out to include much other work. This costume was designed for Marchessa Luisa Casati as Mozart's Queen of the Night in 1922.    Sadly, the photograph of the actual costume shows that it bears little resemblance to the original Bakst design. But Marchessa Casati was a notably unusual, and demanding lady, so its not that surprising.  That said, as an item of absolute fantasy, the sketch is top of the line stuff.  And as a costumer, I am sitting here wracking my brain trying to puzzle out how to build it.

Okay, so that's all for this week's Scatter, no go and scatter yourselves out there in the world and have a grand time!
Posted by Paul G. Ellis at 3:39 AM