Once every seven days, I pry open my skull, and dump a bunch of stuff out for you to sort through.
Here's this weeks pile of ephemera, beauty, and strangeness. 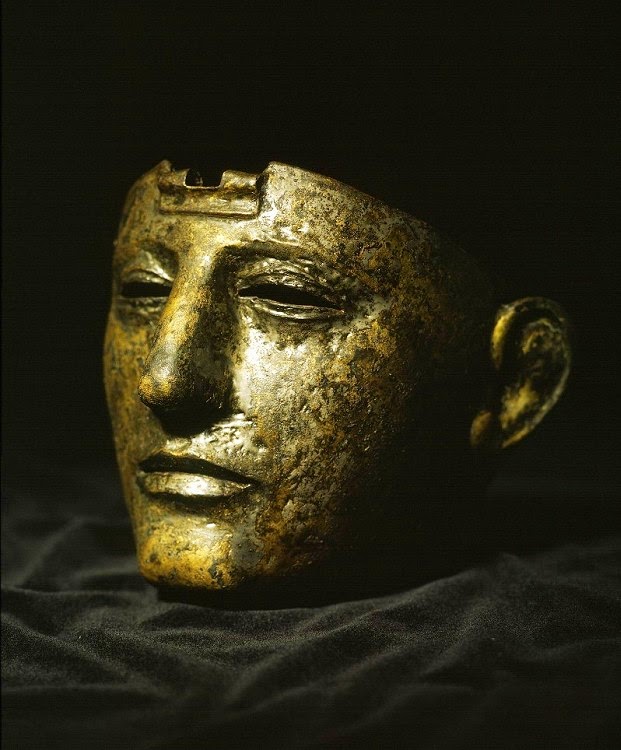 This remarkable object was once the face plate of a Roman helmet, circa 75-100 AD, and was originally plated in silver over its bronze base.  You can see the place for the hinge pin at the center top that allowed it to be swung up as needed.  Its a wonderful piece of craftsmanship, and an interesting look inside our heads too.  Even in battle, we sometimes feel the need to present a beautiful, idealized image of ourselves, our fantasy of ourselves, to the world.  Whatever the man who wore this looked like, it must have made him feel a bit like a god to go into battle with this serene metal face.  And imagine it shining in the sun, plated in silver. 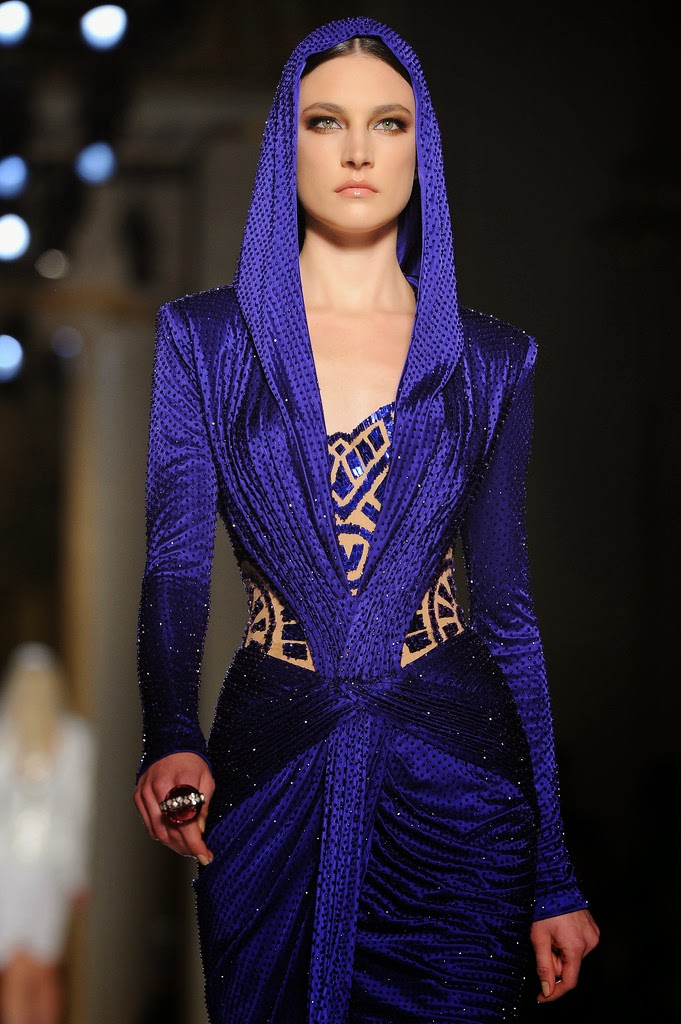 I'm not a fan of Versace.  I will get that out there up front.  That said, the craft put into the house's work is admirable.  The intense blue fabric has been draped perfectly. The beadwork on the sheer under-bodice is immaculately done, and the overall proportions are wonderful.  It ends up looking like something the high priestess would wear in some Sci Fi fantasy film to my eye, but I will not fault the construction or attention to detail. Also, that color is amazing. 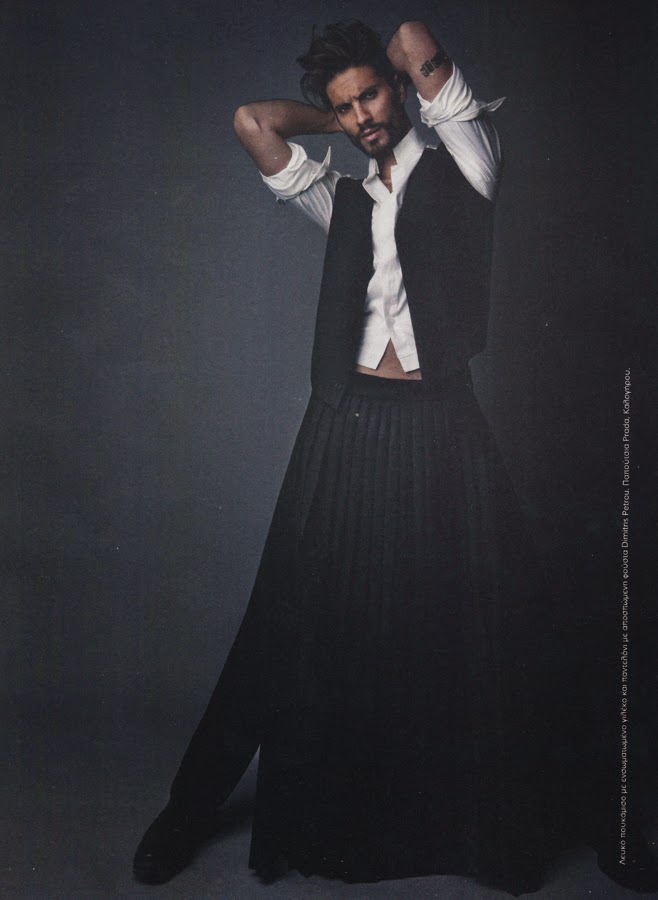 Man skirts.  Of course I'm on board with them.  What I found worthy of note here is that its both bold, and rather timid at the same time.  The boldness comes from the floor length of the pleated skirt, (And designers?  There are more kinds of skirts than kilts that men have traditionally worn, time to move past that, jus' sayin')  The timidity owes to the use of pants under the skirt.  Slits to the hip line?  why not?  let the guy show his gams if he wants to. Its a step forward, but a baby one. 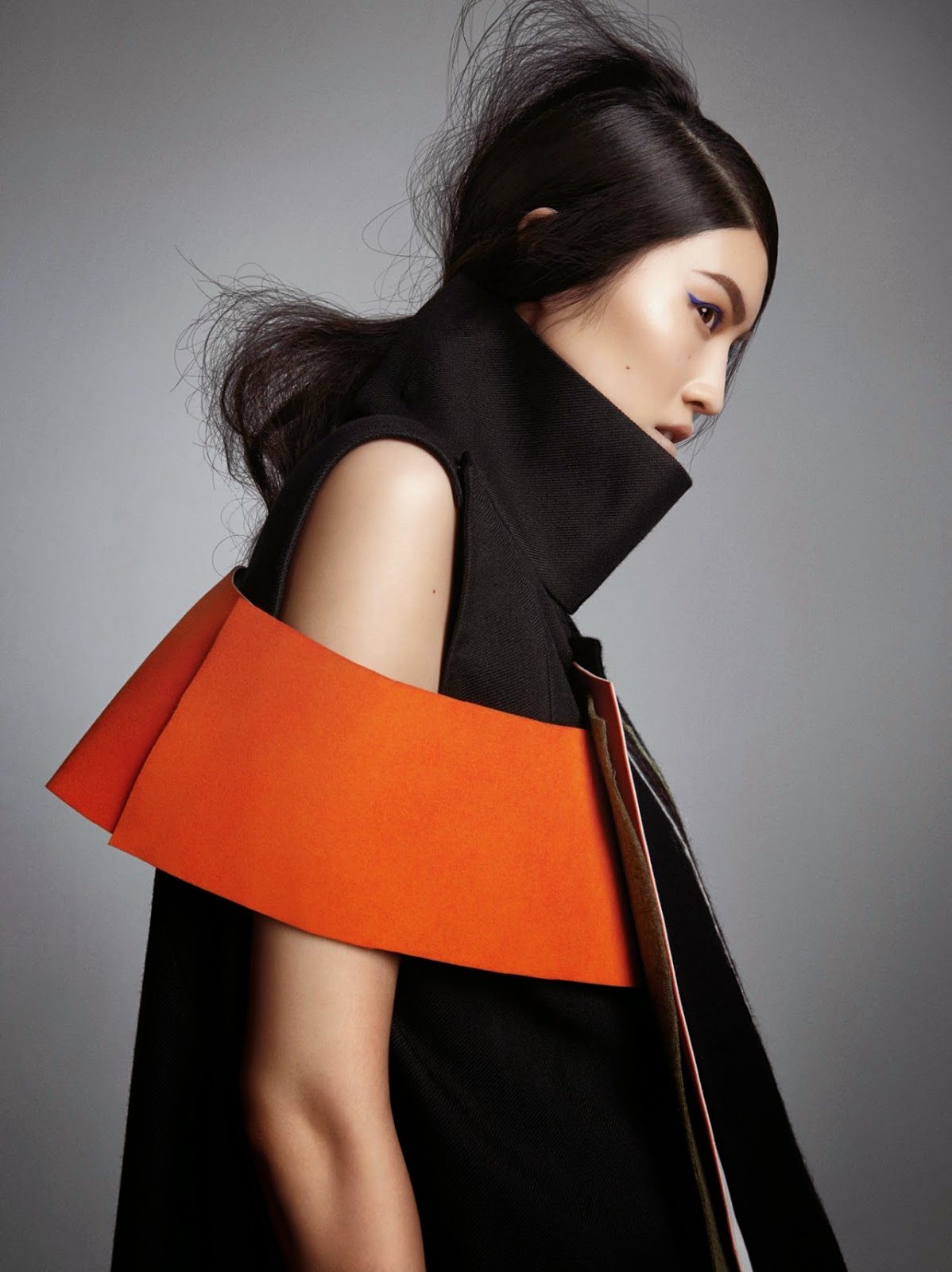 This image from Vogue China caught my attention instantly.  Both the strength of the contrast between the safety orange, and the black, and the stiff geometry of the piece make this feel  profoundly forward thinking.  I would love to know what its made of and how its constructed. I would like to know if its at all comfortable, though it certainly appears not.  If its made of neoprene, then it could actually be mobile and flexible, while retaining its firm look.  Additionally, this is a piece that owes little to history, and nearly everything to now.  The interesting thing is though, work of this sort begins to look dated very quickly.  We move on, away from ideas like this, almost as soon as they appear. 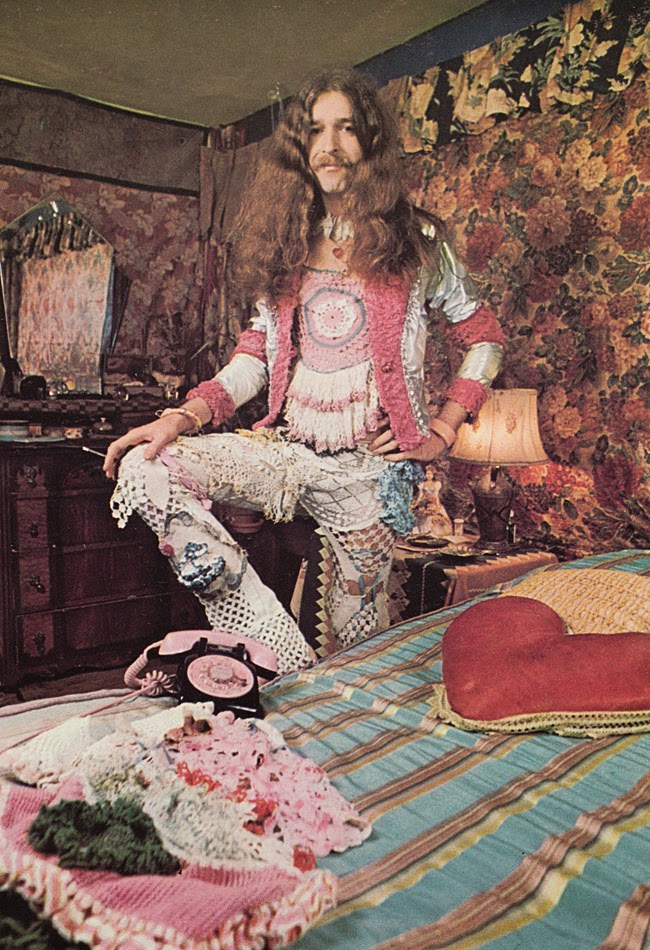 So you want to be a hippie, and do a lot of DIY projects do you?  Okay, go for it. As silly as this ensemble might seem on a number of levels when first looking at it, I can only applaud the resolute application to an aesthetic, and to carrying out a theme completely.  There are also many things hidden among all the fuss that could move into use if edited well.  The textural combination of the silver metallic and the dense fuzziness of the collar and cuffs is one that could move into real world use, though hopefully not in that rather bilious pink.  Also, I see no reason why crocheted elements could not be incorporated into men's clothing with ease.  Imagine a shirt with crocheted insets running down the sleeves.  Strange images like this one make me smile, of course, but they also get the wheels turning in my head. 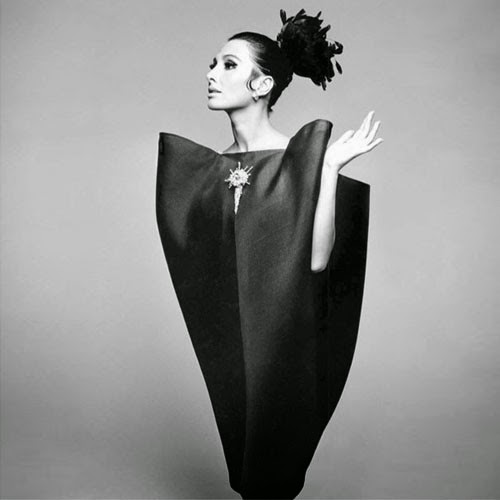 Cristobal Balenciaga, 1964.  I got to actually see this garment for reals at the Balenciaga retrospective hosted at the De Young museum here in SF 4 years back.  Even almost 50 years later, it still was an awesome sight, and a technical marvel.  Sure, its not a silhouette likely to ever become popular, it was meant as an experiment in form, and as such is a rousing success.  The black silk gazar dress is utterly un-ornamented, but for the large scale brooch.  Rendering the dress in black, gives it a severity that would be diminished in another color, yet the model still looks like some exotic flower.  Brilliant use of textiles to push the envelope of what can be done. 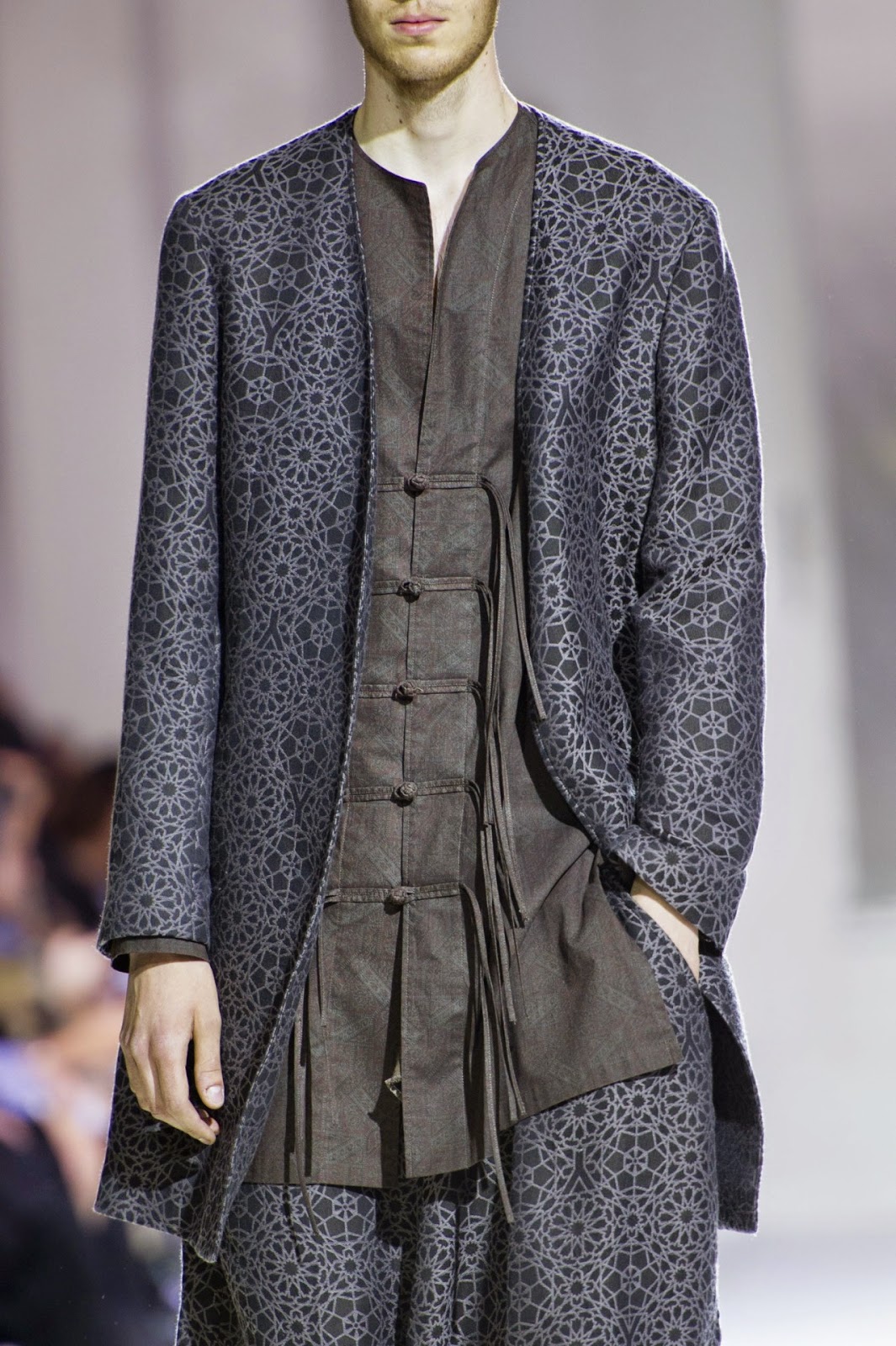 Oh how I do love a lot of the newer ways that men's apparel is expressing itself, and the consequent  expansion of the Attire language that men can speak.  This ensemble is by Yohji Yamamoto, from his most recent collection. Everything about this is easy, comfortable, graceful and elegant.  I could see this kind of dressing for men taking off in a huge way.  The waistcoat is a beautiful piece that could have many uses, and the suit, with its easy cut and full, softly tailored pants could flatter a wide range of men. 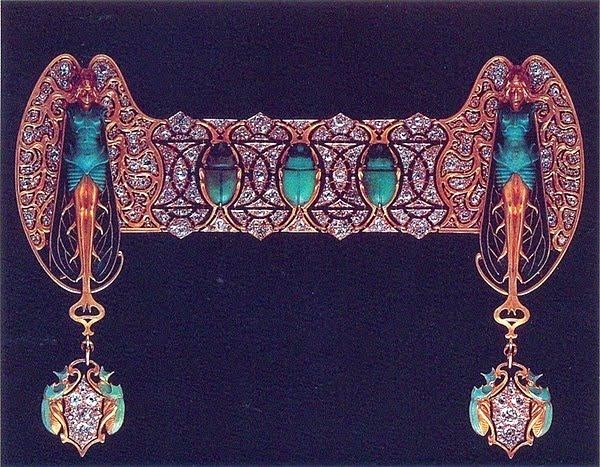 Rene' Lalique. Sigh.  This is a corsage brooch from around 1902, designed in a mash up of Art Nouveau, and Egyptian, that merges beautifully together in Lalique's brilliant hands.  Enamel, diamonds and gold mounting. Breathtaking. 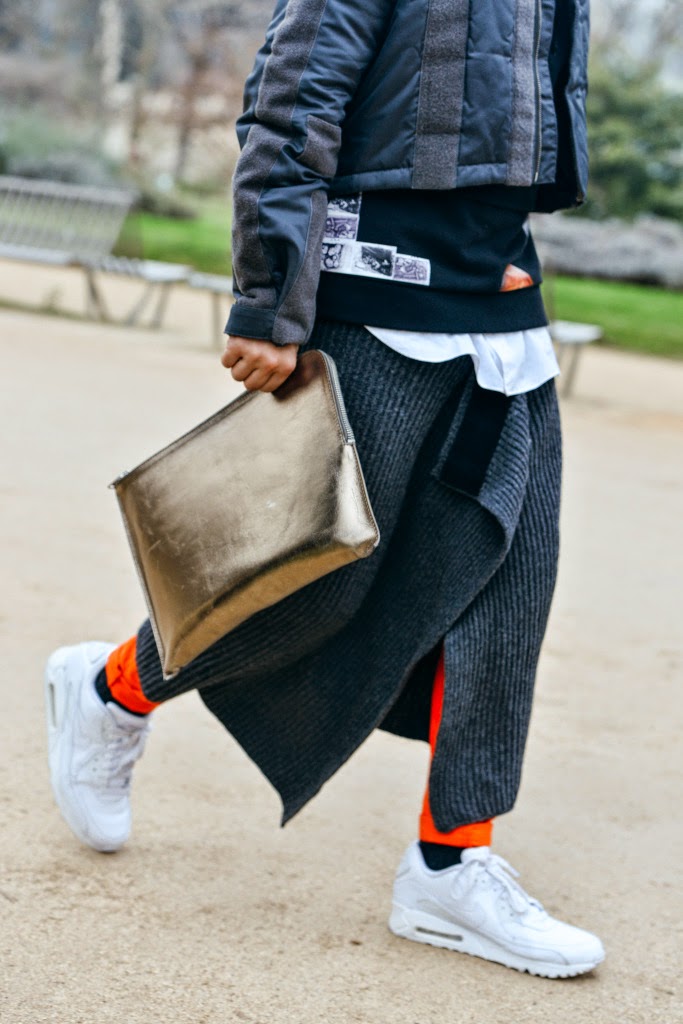 I've written a good deal of late about Gender Free design.  I came across this image and it instantly struck me that nothing about this combination of items establishes for us the wearers gender.  Unless we saw this person's face, and perhaps not even then, would we be able to peg it down.  What lives within that thought is this one.  Why should it matter at all?  And this is a question that is being asked increasingly, with good reason. So its no surprise to me that apparel of this sort is emerging from our unconscious to become expressed in real world terms. 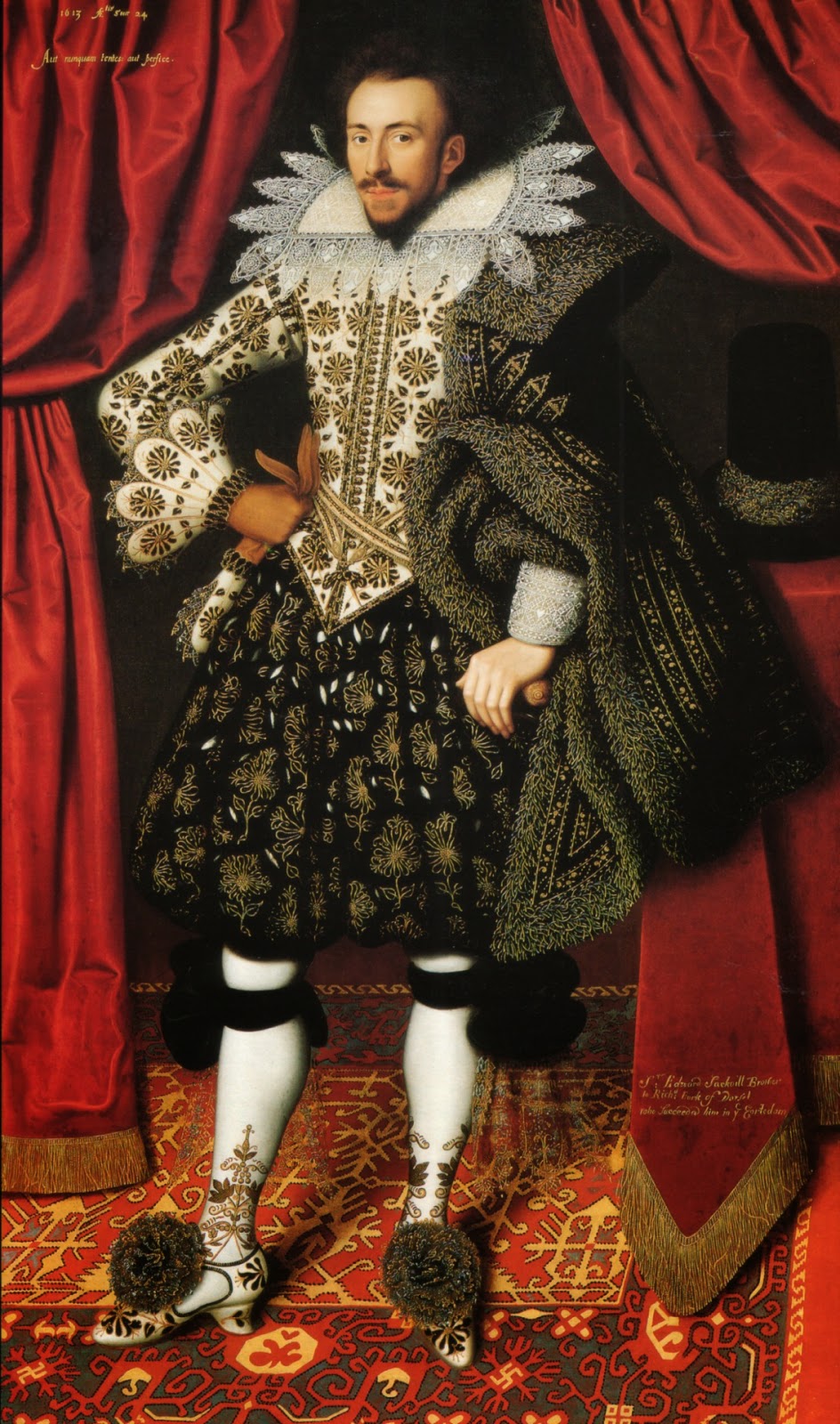 There are dandies, and there are dandies. William Larkin painted this portrait of one of the ultimate dandies, Richard Sackville 3rd Earl of Dorset, in 1613.  From the vast expanse of his dagged lace collar, with its supportase underneath, to the cuffs of his gloves, that match his doublet, from his huge slops style breeches with their myriad tiny slashes, to the giant lace shoe rosettes with the metal spangles in them, he is the image of everything a dandified courtier could present.  Everything about his apparel is scaled up just a bit; tighter, or more voluminous, lavish in pattern, and decoration. The only thing that keeps this from tipping over the edge into ridiculousness is the relative restraint of the color palette.  Black, white, and gold only.  He must have spent and outrageous amount on this set of clothes, if he ever actually paid for them in full. Many of his fellow aristos rarely paid for their clothing in total.  One thing is sure, though, paid for or not, he would have instantly been known as a person of consequence. 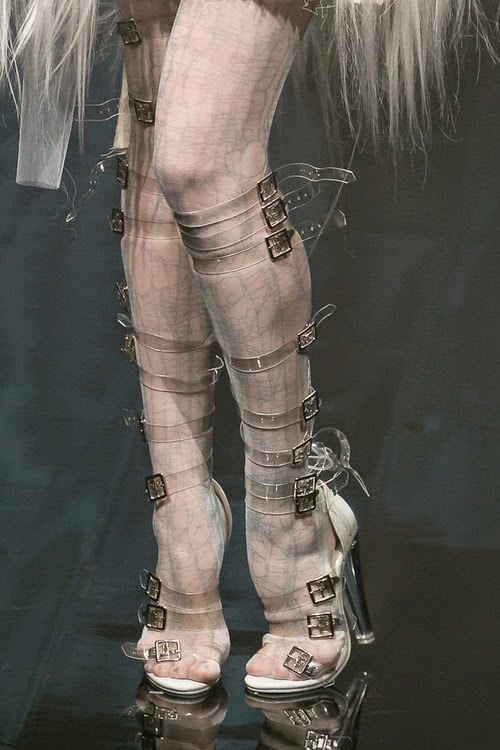 Talk about kinky boots!  Okay so they are actually sandals, if you wanna get picky about it.  But what I'm struck with here is the weird mix of visual cues.  We have fake fur, stockings with a subtle alligator print on them and these crazy shoes with all these clear vinyl straps squeezing the models leg like bratwurst.  Sometimes the combinations that get created leave me baffled.  Apart from the obvious kink vibe going on here, there is also a hint of orthopedic device about these.  And they sure as hell can't be pleasant to wear.  Though I doubt that was a consideration at all in their design. 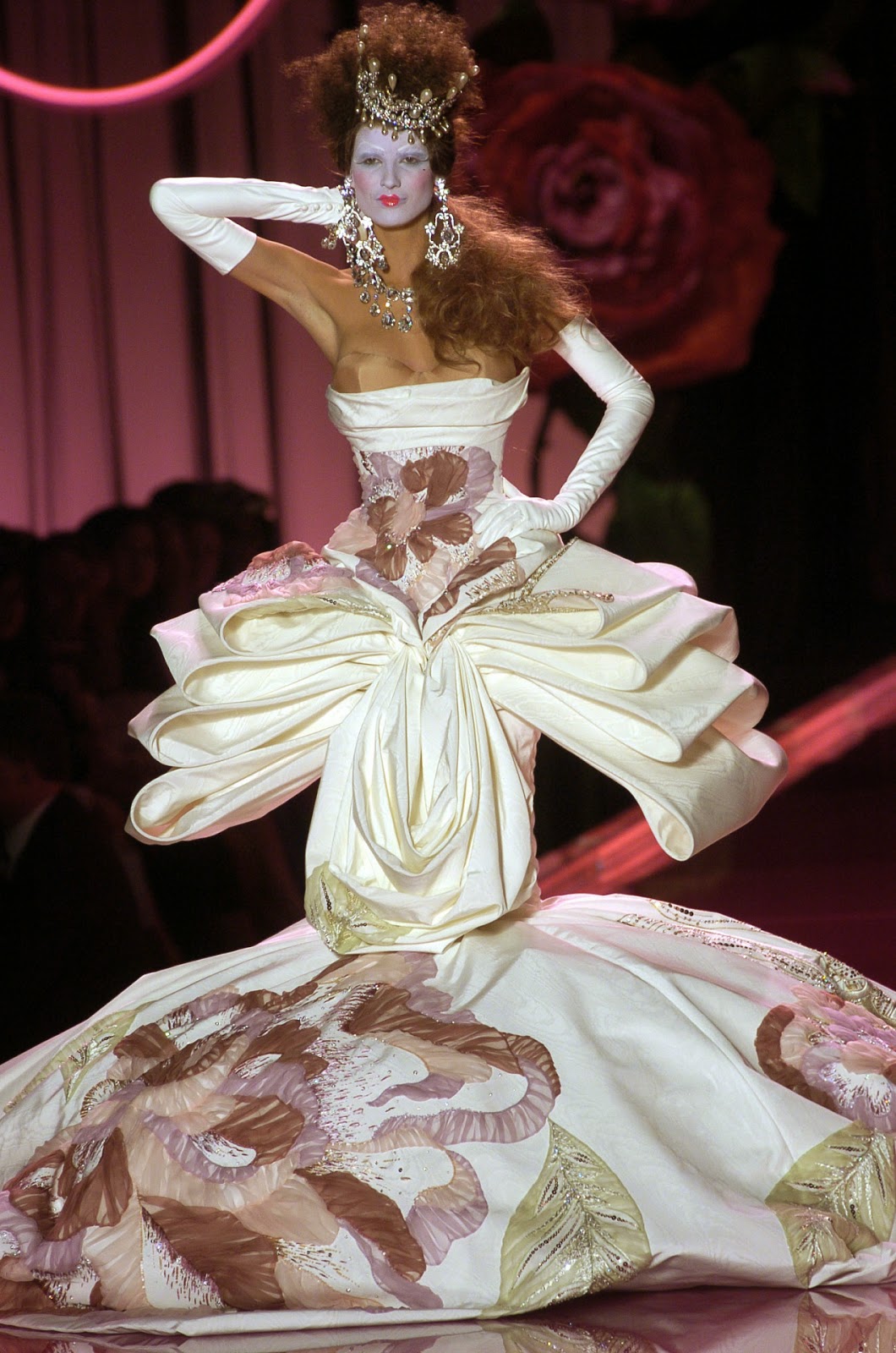 To close out this edition, another look at a designer who pushes the boundaries of structure and form, but in an entirely different way.  During his tenure at Dior, John Galliano sent this, among many other extraordinary, OTT garments down the runway.  Though, actually, I find this gown vulgar in the extreme, especially with the gigantic va-jay-jay on the front, I can only sit awestruck by the insane technical skill required to make such a garment even possible.  Where Balenciaga pushed the envelope with sublime restraint, through vicious editing down to essentials, Galliano went in exactly the opposite direction, while achieving the same result of creating something that blew the doors open on what we thought possible to achieve.  I admit to studying this image and wondering just exactly how those huge folded wings stay out the way they do.
See? These are the kinds of things I think about a lot.  I'm surprised I don't get headaches. (grin)

Well, thass all folks!  Have a great weekend!
Posted by Paul G. Ellis at 3:54 AM