Though Portugal was never one of the most powerful nations in Europe, they certainly did try to keep up with court etiquette as it was practiced elsewhere, and the fashions that predominated in those more influential courts.  As a case in point, this magnificent court gown from 1845.  It conforms to both the current mode for formal evening dress in shape, and has the requisite train that indicates the status of the wearer, by its length. 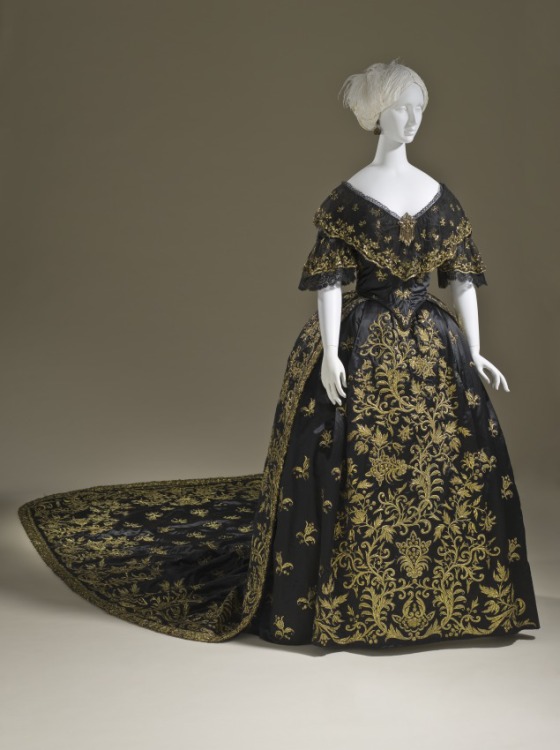 It is a garment both lavish and sober at the same time.  Though it is heavily embellished in gold, the pattern of the embroideries refers more to the baroque or the rococo than to the 19th century.  Also the choice of base material, this stiff, plain weave, gunmetal gray silk, is far more restrained that would have been seen at the French, English, or Italian courts. 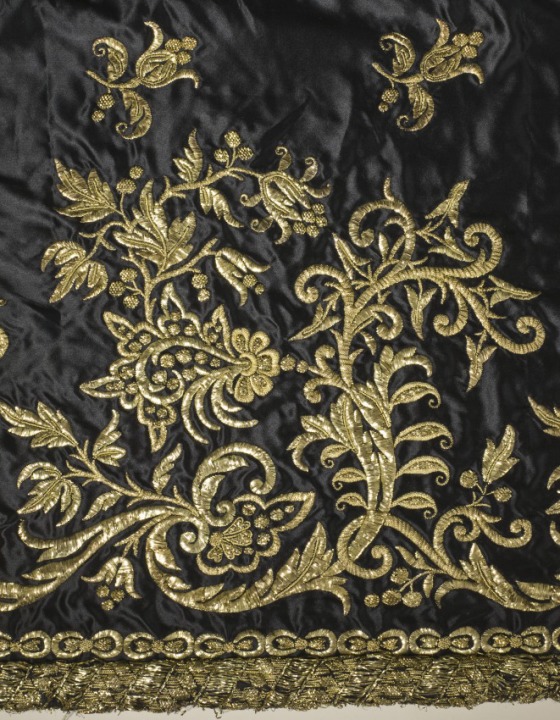 Let me start with the shape of the dress itself.  Looking at the dress, devoid of it's train, it could be a perfectly acceptable, though powerfully luxurious evening or ball gown.  Everything about it is right out of the style book for 1845.  The deep Bertha collar, the sharply pointed waist, and the half sleeves were all standard issue parts of women's clothing at the time. The skirt has reached the maximum fullness possible with only petticoats to prop it out.  It will be another years before the cage crinoline will allow skirts to widen ever further. 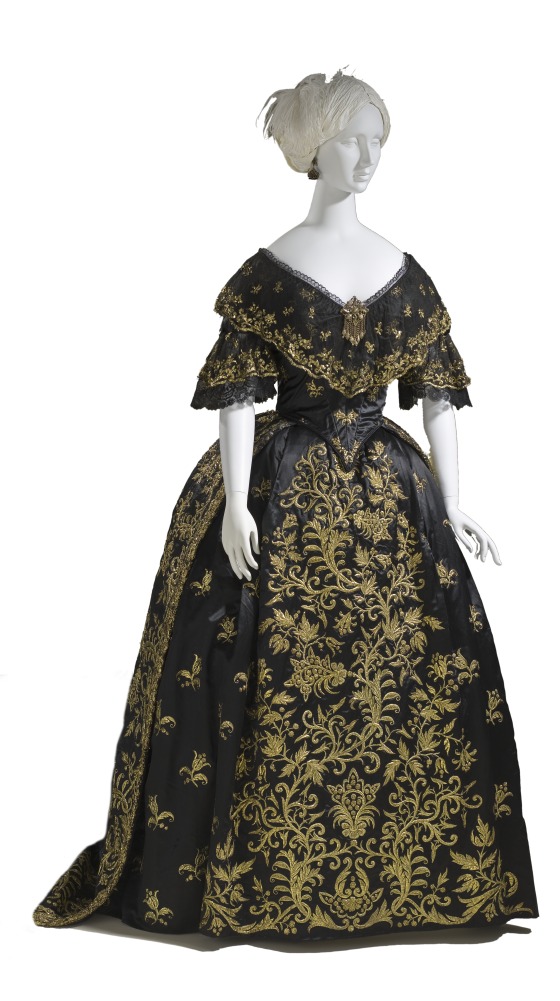 Court trains were most often attached at the waist, less so at the shoulder.  This train conforms to all the rules and regulations governing its shape, and wear.  At this point in time, court trains were essentially rectangles that were pleated into form at the waist, or shoulder.  It would be separate from the main body of the dress, allowing the wearer to use the gown at less important functions. And this one, at 54 inches of full width and 120 inches of length is meant for a noble lady of the highest rank. 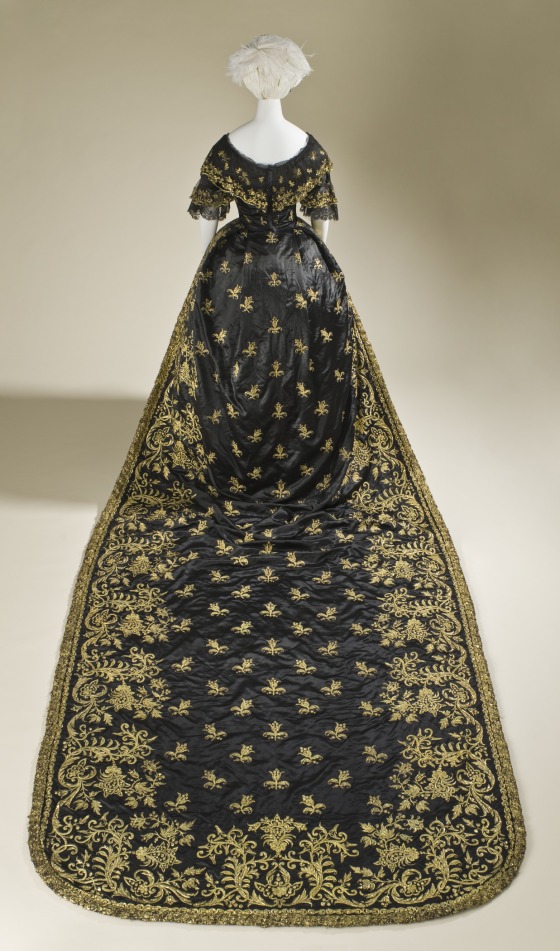 The amount and quality of the gold work decoration on the surface of the dress and train was not regulated at the Portuguese court, so this display is entirely about wealth, and the status that conferred.  We are fortunate that the conservators at the Los Angeles County Museum of Art, where this resides, thought to take numerous detail images of the embroidery work as that we can see its complexity, and its excellence up close.  Every last stitch of this work is done with gold plated strip, gold wound thread, and gold plated purl, (tightly wound coils that are cut into short section and sewn down). 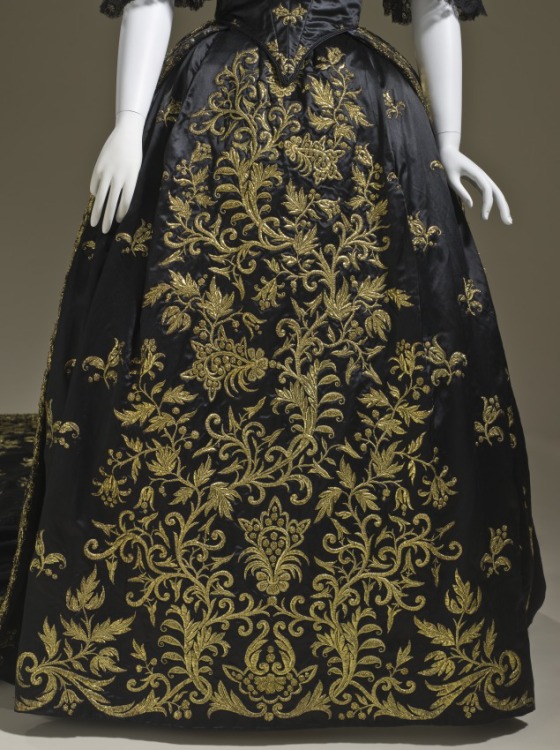 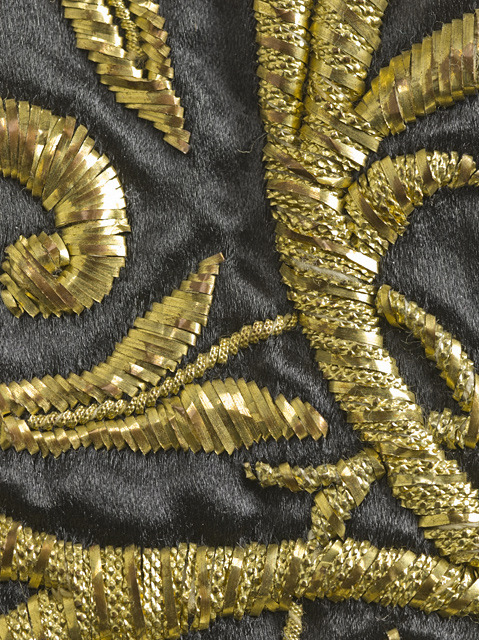 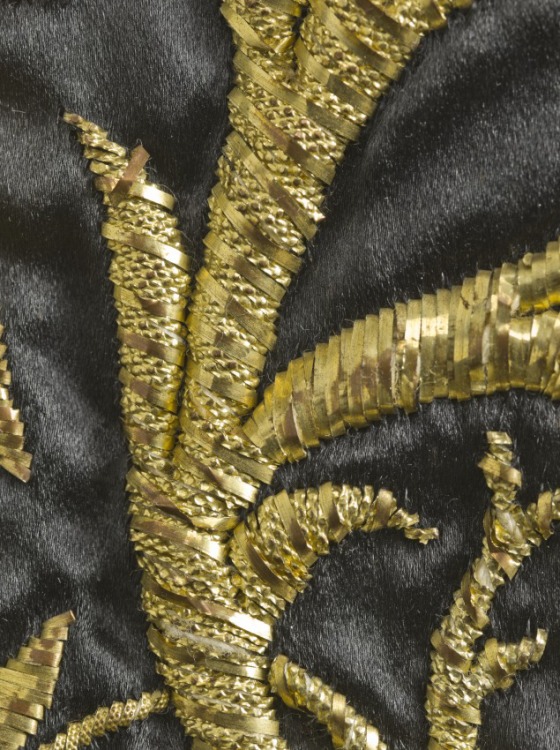 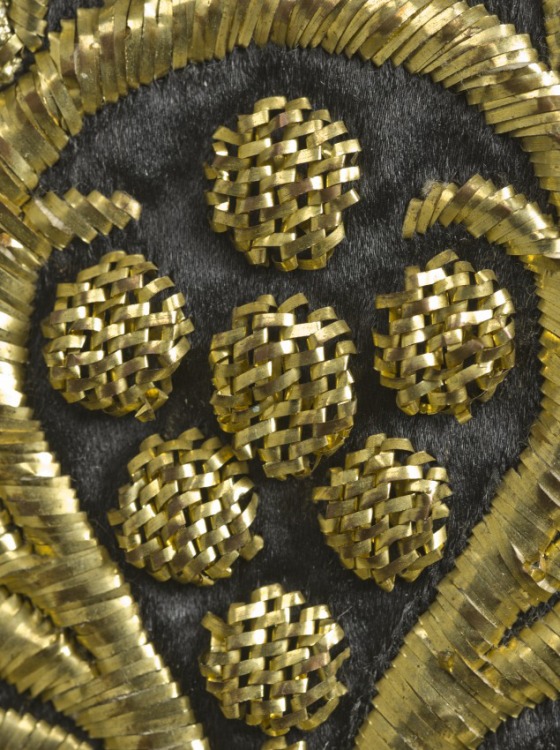 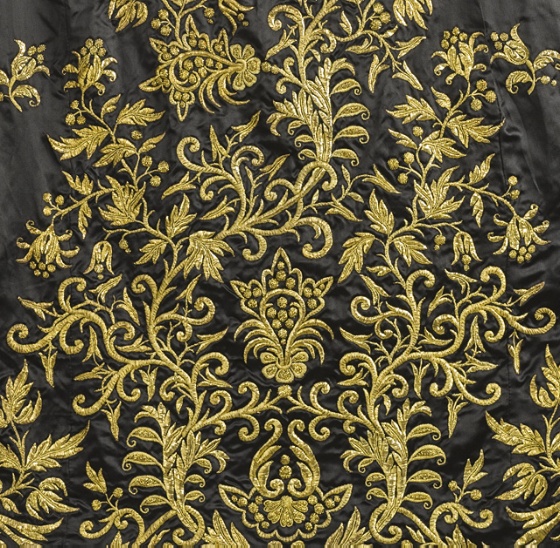 The greater part of the work is also padded to give it more dimension away from the textile surface.  Typically narrow bits of cotton, wool or silk wadding would first be secured and then the gold work would be done over it.  A conservative estimate of the time required to create this is in the thousands of person hours, and undoubtedly many sets of hands did the work, otherwise it would have quite literally required years to complete.
The world where such things have a functional reality, even for the wealthy, is gone.  Those royal courts that remain have moved forward with the times, and such levels of formality and expense are rarely, if ever required.  It is, however, important for us to look back and see these things, even if we dislike what they stand for, as symbols of a way we thought and felt about nation, power, and social precedence. 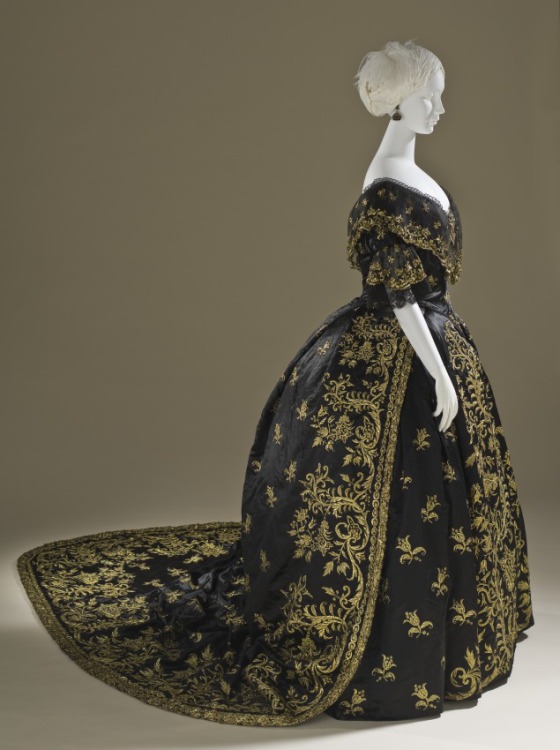