Hello, my friends, my readers.  It is time again for this week's journey into the swirling vortex that is my feverish little mind.  A Scatter has been duly gathered, so let's get right to it, shall we? 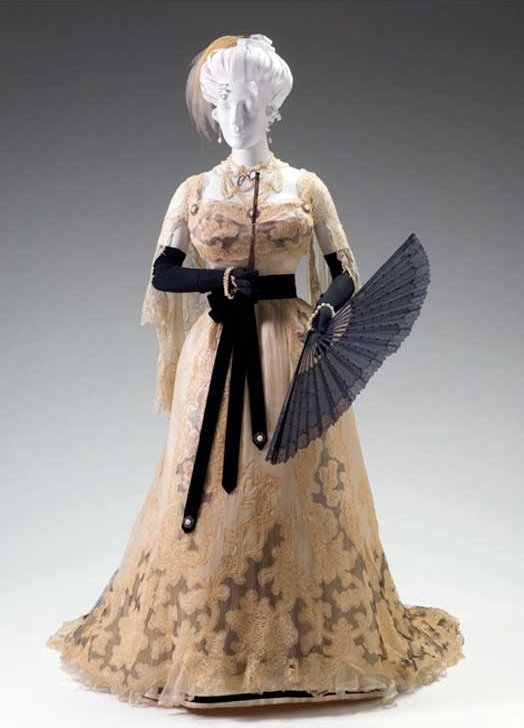 It is not all that common to get to see historical garments fully accessorized in a way that allows you to get the complete impact of what was worn, and how.  This is a Jean Phillipe Worth reception gown from between 1895 and 1900, after he took over the design reins when his father passed away.  The Kyoto Costume Institute, prides itself on always presenting their collected pieces as fully accessorized as is possible to do.  So, this lavish dress is accentuated by al the bits and bobs a lady of quality would have had on her person at a formal reception.  The gloves are the correct length for evening. Over the elbow was required for any formal events.  She wears an aigrette of plumage in her hair and carries both a fan, and her lorgnette.  She is also decked out with  a massive necklace, matching bracelets and even earrings.  We can then really see the magisterial effect full on.  Brava to the Kyoto Costume Institute for taking such pains.  It helps us all see the past more clearly. 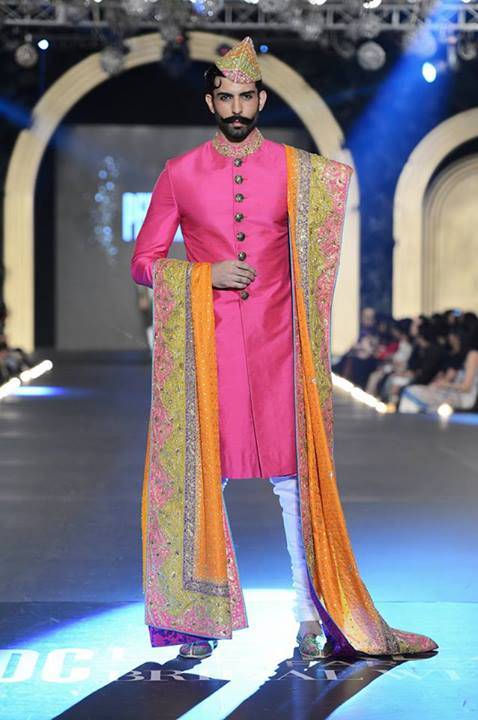 Pakistani designer Nomi Ansari presented this brilliantly colorful menswear look in 2013.  I am struck by the impact the color has.  Pink, has been, for over a century now, in Western society a color associated not only with the feminine, but with youthful femininity. Here though, rendered through the lens of a different cultural aesthetic, it becomes something entirely different.  Energetic, luxurious, and sensual are all words that come to mind, counterbalancing the spare cut of the tunic coat, and pants.  You all know what a color whore I am. I would be delighted to see more saturated, and decorative clothing like this make its way into Western menswear.  And, it must be said, the model is a knockout. 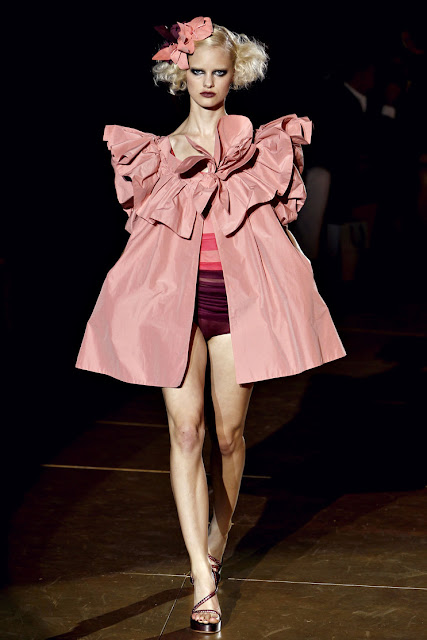 Ah the Lolita trope rears its head again.  I find it fascinating in a creepy way that designers still insist on presenting this sort of infantilized image of woman.  Marc Jacobs, who designed this ensemble has expanded the proportions here to the point where it could be satire on his part, but the message is murky.  The slightly dusty pink looks mature to our eyes, and the over scaled bow implies early childhood.  What are we really seeing here?  A woman who wants to be treated as a child?  A child pretending to be an adult woman?  Or is this a slap at old style male ideas of womanhood? 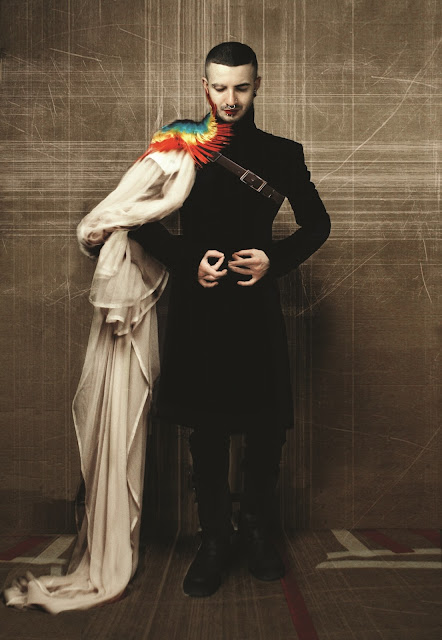 This image just got me thinking so much about how our perceptions of self are shifting these days.  We have finally allowed ourselves to begin to perceive beyond the tradition bound limitations of our culture, and in doing so are hesitantly embracing new ways of being.  This of course manifests itself in how we dress ourselves, the surface packaging we present to the world.  Sure, this image is carefully crafted to blur boundaries, which is precisely my point. As things progress, and we slowly become accustomed to the true breadth of human existence, our ability to see and understand the way we tog ourselves out expands.  Where an image of this sort would have been quite disturbing to most people not all that long ago, now, though it still has an edge to it, it speaks differently, because we can see differently. 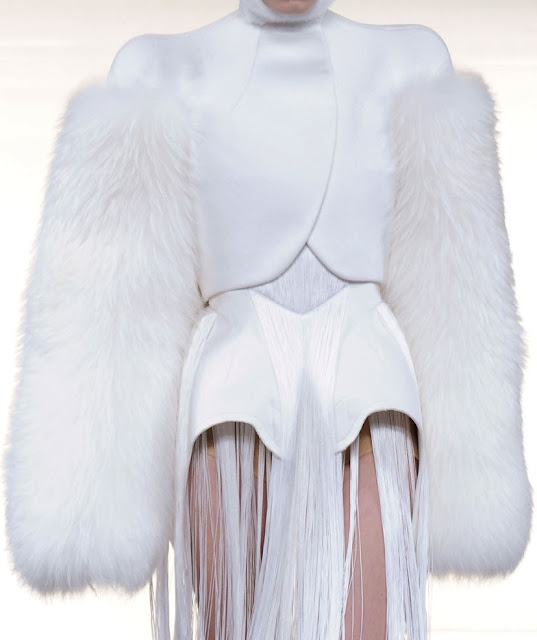 As an experiment in mass and texture, I get this.  As a garment that had relevance in the world, it doesn't make the grade.  It is, of course a couture runway ensemble, and as such is not meant to be taken literally, but to be disassembled for the ideas in it.  To me, the two elements that deserve to be explored further are the cut of the bolero jacket body, which has wonderful sweeping curves, and an interesting structure.  The skirt with the front mounted curving shapes I would like to see expressed in a longer version, without the fringes.  I think it could be an arresting shape. 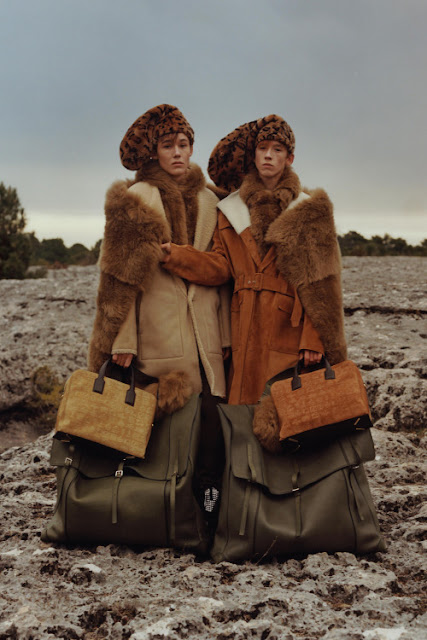 You can color me baffled by this one.  This fashion shoot of Loewe Menswear doesn't make me want to rush out and purchase the coats, or the bags, which should at the end of things be the point.  Nor does this image succeed for me on a purely artistic level.  Perhaps it is that the two men are so swallowed by the mass of everything they have on and around them that it ceases to be about people, but only about a mound of stuff.  Perhaps if they had jettisoned the 20$ a yard fake fur they ladled on this it might have worked.  And those gigantic soft sided bags?  What exactly are you supposed to use those for?  Body parts?  Pardon me, I get snarky, now and again. It will pass. 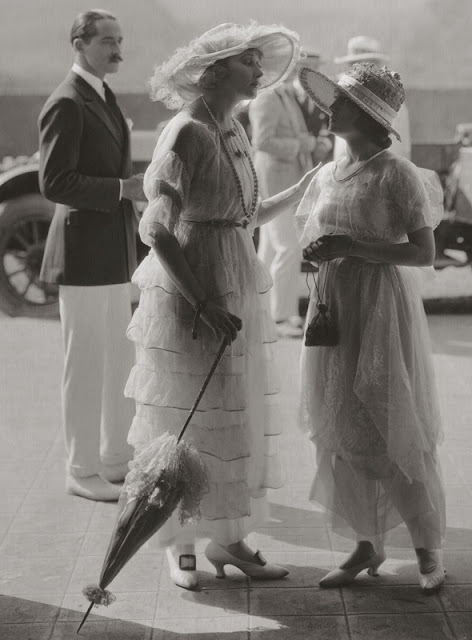 Before filmed and televised fashion shows became common it was a regularly done thing by the major fashion houses, that models would be dressed in their latest creations and sent to major hang outs of the wealthy like Deauville, Ascot, and Monte Carlo.  These two exquisitely turned out women are showing off the fashions of 1919 at Deauville.  It is interesting to note that, just post war, there was a huge trend to romanticism, here wonderfully rendered.  As well, this is a look in transition.  Within 5 years hemlines would rise to the highest point they would reach until the 1960s. And looking backward, the frothy lightness of these clothes was an impossibility only a decade before. 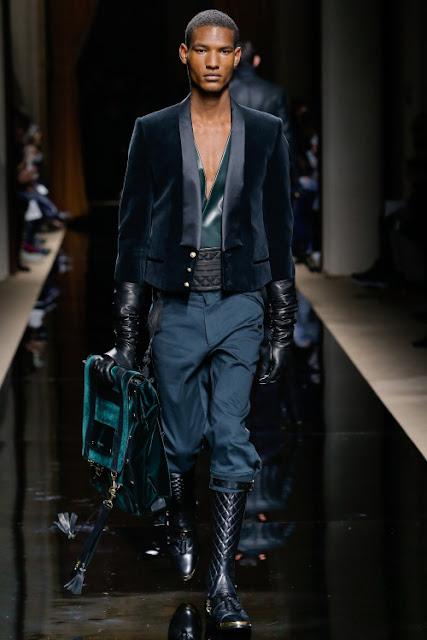 Here's another glimpse of our perceptions in transition.  This Balmain outfit has subtle cues that take it away from standard menswear ideas, and push it somewhere closer to, if not the middle, then somewhere outside of what we have known as normal apparel for men.  The gloves, though black leather, are allowed to bunch and fall in a way that is like women's gloves.  The shirt, with its deep vee and cross over is far more like a woman's blouse than a man's shirt.  The velveteen of the short jacket is a sly nod as well. I find it very interesting to watch as more designers choose to mess around in this way.  Also, me wants that jacket. 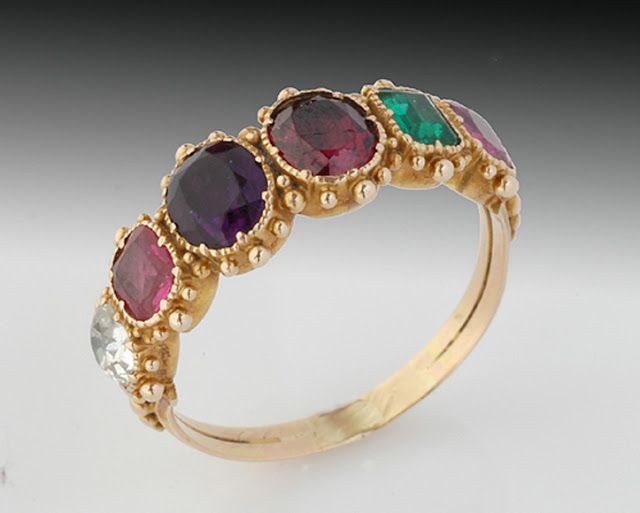 This is called a regard ring.  It comes from the late Georgian period, about 1820.  It was a popular gift to give a sweetheart, or to a dear friend, to register the level of one's regard for them.  Each stone represents one letter in the word regard.  They are Ruby, Emerald, Garnet, Amethyst, Ruby, and Diamond.  I love the idea of something like this.  Such notions are so rarely used today.  Thoroughly charming. 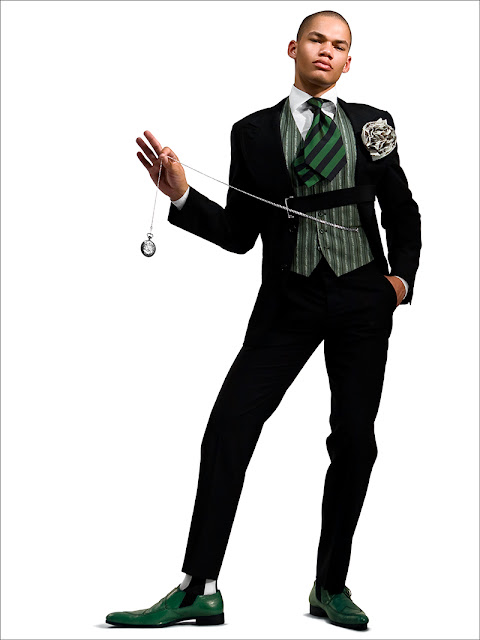 Ah, the Dandy.  Lordy how I love me a good old fashioned dandy. This image brings the concept fully forward into the 21st century.  I love the nods towards fin de siecle tailoring, and style. I also love the way proportion has been messed with.  The belt under the ribcage, the extended point on the shoes, the flower and the broad short tie all twit the old guard version of dandyism, and make it fresh.  More of this, please! 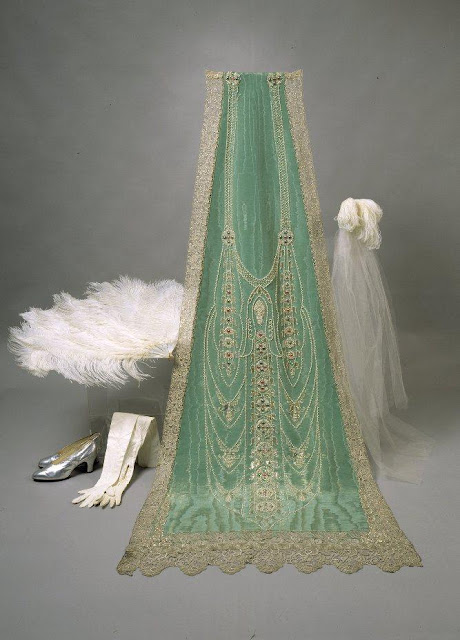 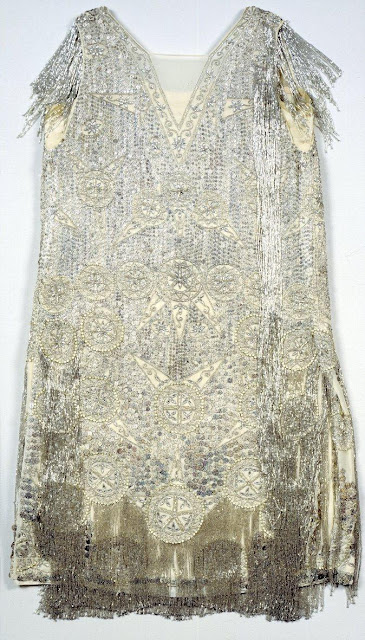 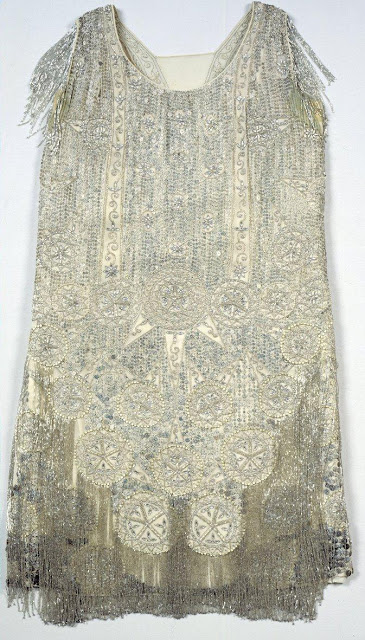 Formal court presentation in England was, by 1926 when this ensemble was made and worn, one of the last places where all the rules were still followed with regard to dress and accessories.  Of course a lady could wear a gown that was to the current taste, so this heavily beaded chemise dress hit at mid calf, not the floor.  The other elements, however, fall strictly into line with the existing rules.  The regulation length train, the shoulder height white gloves, the feather fan, and the headdress with veil that sports 3 ostrich feathers.  The color of the shoes was not regulated but these are of silver kidskin, to coordinate with the silver beading of the gown.  I particularly like the design of the bead work on the green silk moire' train.  Luscious. 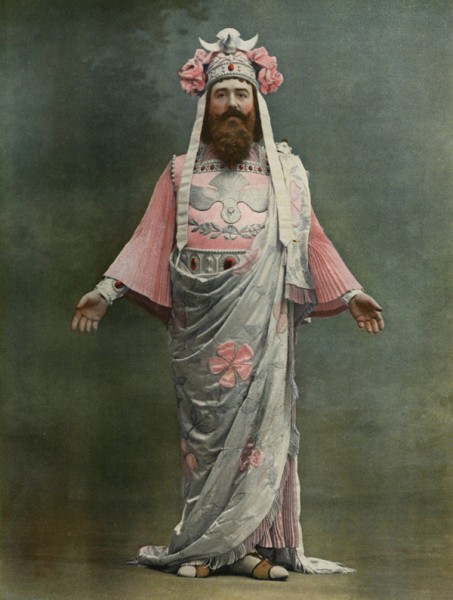 Finishing out this week's selection, this Belle Epoque opera costume as photographed for Le Theatre Magazine in Paris.  It is an interesting look at how much current artistic tastes inevitably influence how a costume for stage or screen ends up looking.  Looking like he stepped out of a drawing by Alphonse Mucha, this actor is dressed in clothing that refers to many of the common images of the time.  His headdress has the same outjutting masses at the temples common in design at the time.  The style of the decoration on his robe looks like it could have come from Poiret's fashion house.  No matter how hard designers of costume try, they cannot escape letting at least a tiny bit of their own time in.  Of course this is meant to be a fantasy costume, and as such it is even more likely to have modern design ideas be a major player.

That's it for this week's edition.  I hope you enjoyed it.
With a bow to all my readers, adieu for now.  Now get out there and enjoy your weekend!