Welcome to the first Scatter post for 2016! There has been quite a lot of build up of new material to share, so it was tough coming up with just what I wanted to talk about.  So, here's goes nothing! 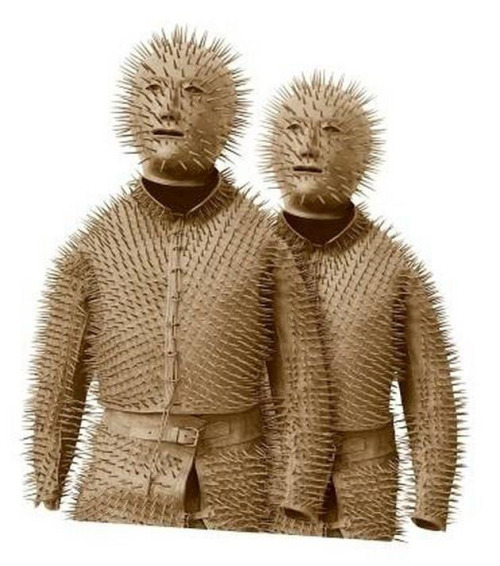 Lets talk about something rather prickly, shall we?  These are not art pieces, they are not for some edgy performance piece, though they surely could be.  This is actually armor meant for a very specific purpose.  This apparel was in use in Siberia in the past for bear hunting.  Though I suspect that, given the size differential between humans and bears, there was still a good deal of injury to the hunters, but all these spikes would surely have been a deterrent, and would have kept those huge claws at bay. 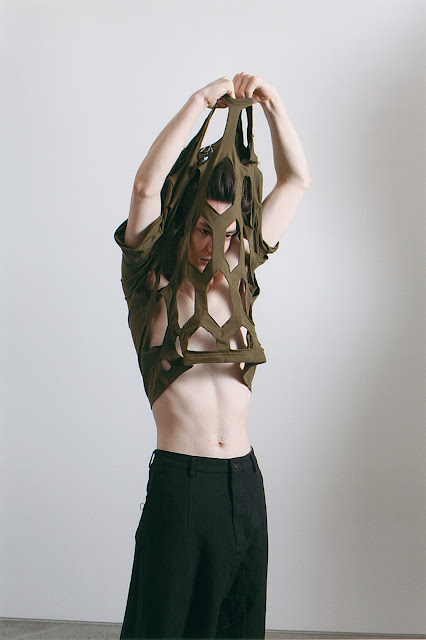 Issues of utility are sometimes entirely avoided by words in the Attire lexicon.  Take this Comme Des Garcons shirt.  As open as it is on it's front face, it serves no function beyond that of adornment.  It could be argued, however that adornment itself is one of the primary functions of the Attire language, and therefore this item, presents the essential nature of the tongue we wear.  It is an article meant to enhance attractiveness to others, and nothing else.  When we look at the broad scope of the language, a huge percentage of the words that exist are precisely that. 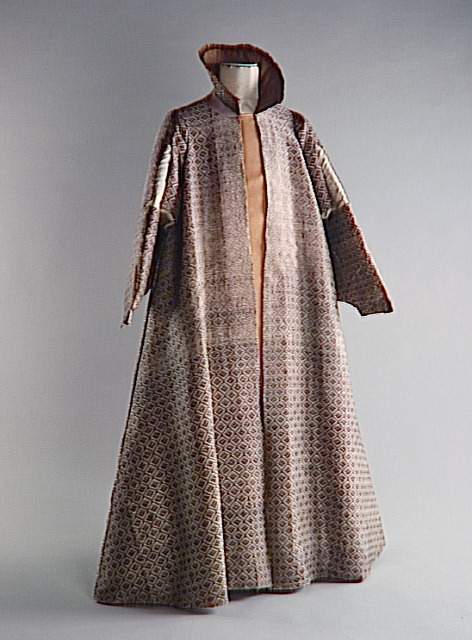 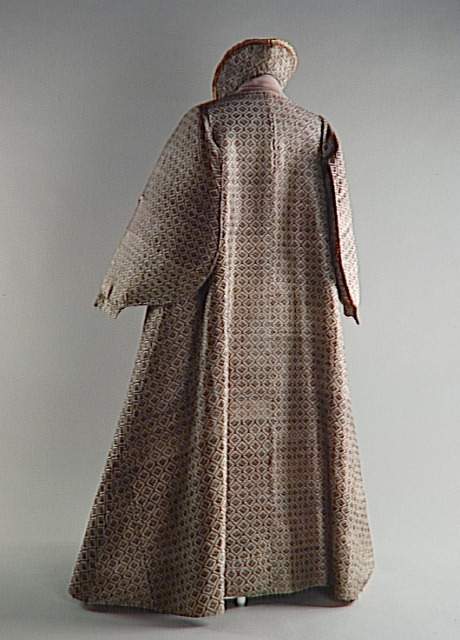 This magnificent coat is a true rarity.  Outwear surviving as long as this has is nearly unheard of. In fact there are only a handful of pieces of this sort known to exist.  This is a woman's coat from the earlier 1500s.  It is made of a beautiful polychrome silk brocade and has the uniquely shaped sleeves popular during the beginning of the Tudor period.  Often such sleeves had a slit that began just above the wrist and ran up to near the shoulder, so that the coat sleeve could be left hanging while the arm came through the opening.  It was quite useful, since coats were often worn indoors as well as out, due to the lack of heating.  What makes it so amazing that this survives is the huge expanse of expensive material that could easily, and most often was, remade into something else. 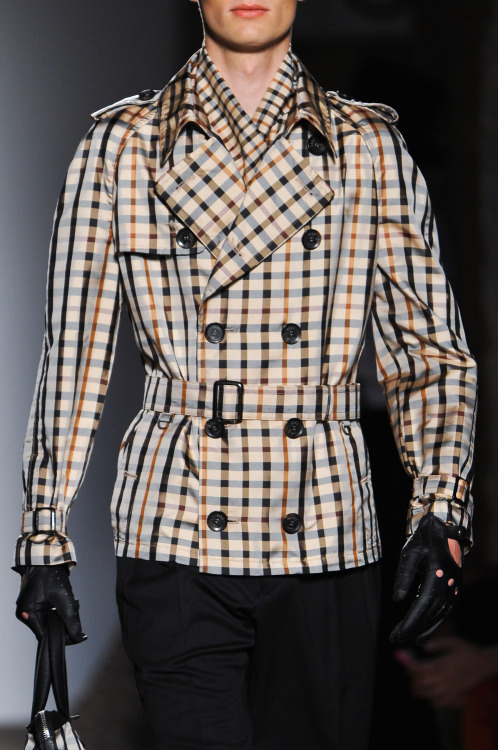 I really like this, though I personally would look terrible in it.  I love the color combination, the use of two different scales of the same pattern, and the fact that as complex as this garment is, somehow being rendered in a strong pattern doesn't take it over the top. When I really scrutinize this I can see that every design element works within the structure of the pattern, so it is not jarring, which is the typical result of trying to make a garment with a lot of pieces, that is also patterned. 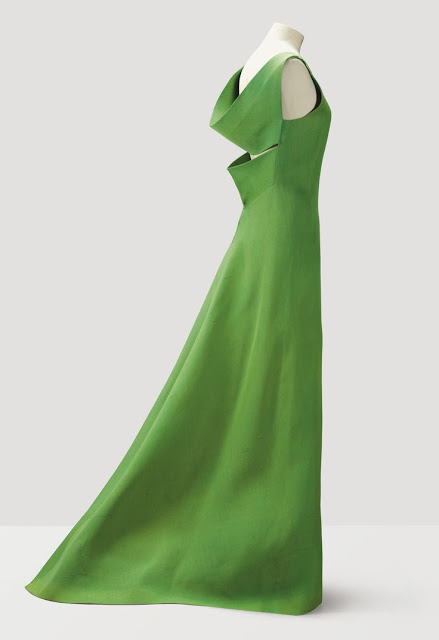 Pierre Cardin was an acolyte of Cristobal Balenciaga, and it shows out loud in his earlier work.  This evening dress is from 1962.  He obviously learned about editing from Balenciaga.  He also learned how to cut to minimize the number of pieces.  Considering the importance of looking ultramodern at the time, space aged, this combination of editing for shape, use of solid material, and confining the design to the minimum number of possible pieces, creates an end product that looks fiercely modern, even now.  And that luscious green.  Yes. 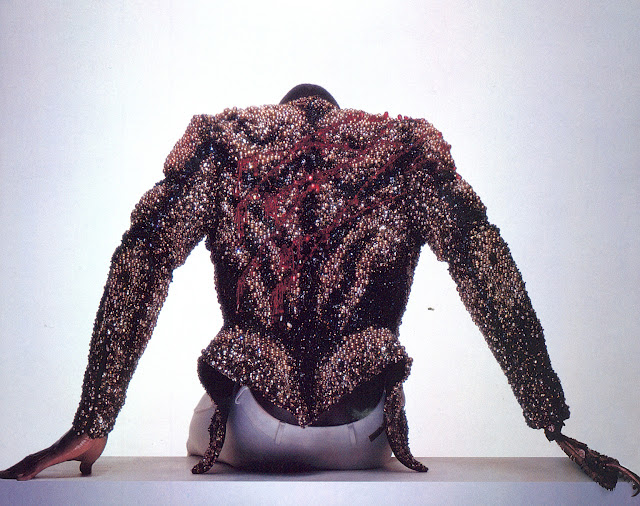 It is something I'm delighted to see happening, menswear getting the level of embellishment that is available to women's clothing.  This jacket is dazzling, and has an interesting sleeve structure, with the intentional indents at the base of the deltoid and at the elbow.  What makes this image much more worthy of commentary is the model.  It took me a moment to realize that he is missing one hand, and that they had styled his prosthetic with the same sort of beadwork.  And I say, why the heck not?  It's also as subtle indicator of the change that is occurring regarding differently-abled people and their appearance in fashion editorials and advertising.  It's a small thing, but by these little changes, we all change. 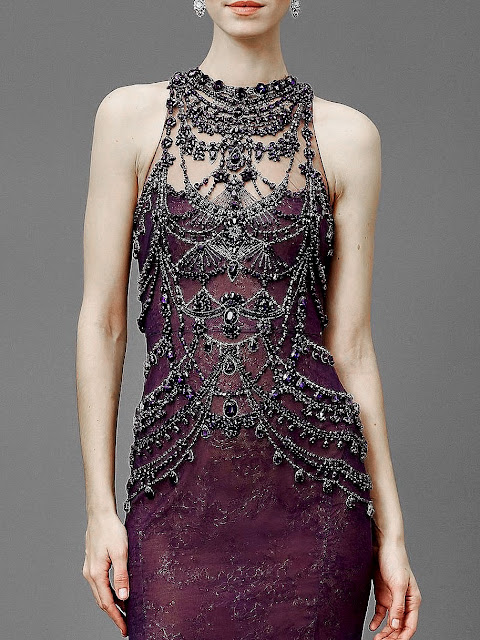 I'm including this image because it's a simply breathtaking example of the embroiderer's art.  Devised to look like some wildly extravagant necklace, the embroidery skims the surface in such a way that the illusion of it's being separate is unbroken.  Marchesa Pre Fall 2016 collection.  Thanks, Georgina Chapman. 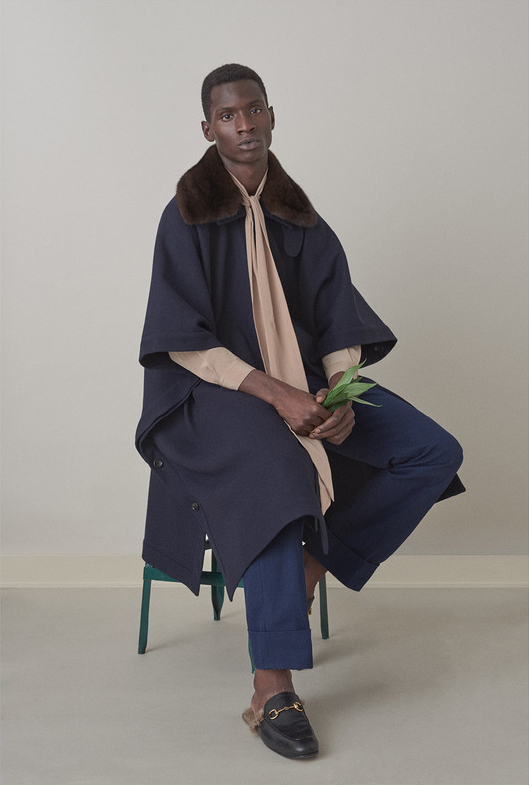 Another look at how menswear is shifting, altering to encompass softer ideas of maleness than we have allowed before.  The rounded shoulder line of the cape/coat, the volume of the trouser legs, and especially the long tie of the shirt.  It's a simple rendering of a societal shift that continues.  I fully realize that this is still at the outer edges of the culture, but it keeps gaining ground as we discuss in greater depth subjects of gender, sexuality, and social roles. 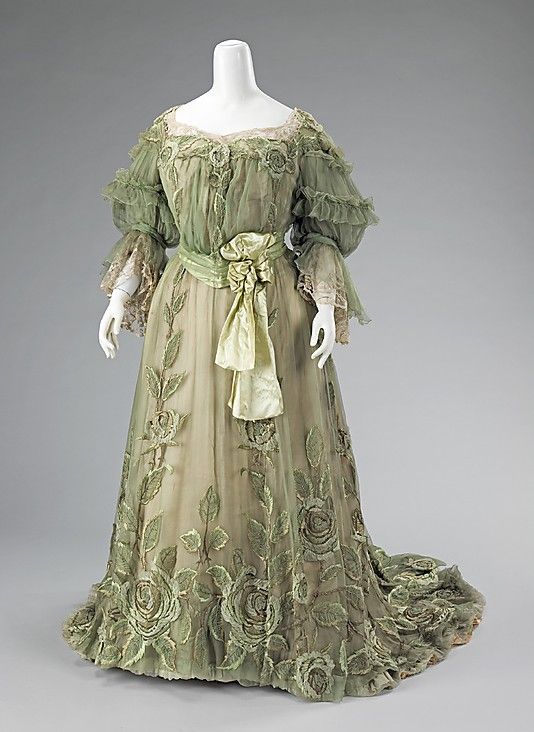 Speaking of social roles.  How about this dinner dress from the 1890s?  This dress, as much as it speaks of the wearer's taste, speaks every bit as much about what was expected of women of a certain class.  A dinner gown like this needed to be an extravagant object, full of detail, and fragile decoration that made it evident that the lady had a multitude of servants to maintain it before and after dinner.  This dress, with it's embroidered silk chiffon over-dress would have been nightmarish to tend to once it got rumpled, or heaven forbid, stained.  Extreme care would be needed not to scorch the chiffon when ironing it.  So someone expert at handling the irons of the time would be needed.  We tend not to think of it, but households of middle class and upwards maintained their own laundresses, who were, like lady's maids, expected to understand the subtleties of using an iron that was heated on a stove. 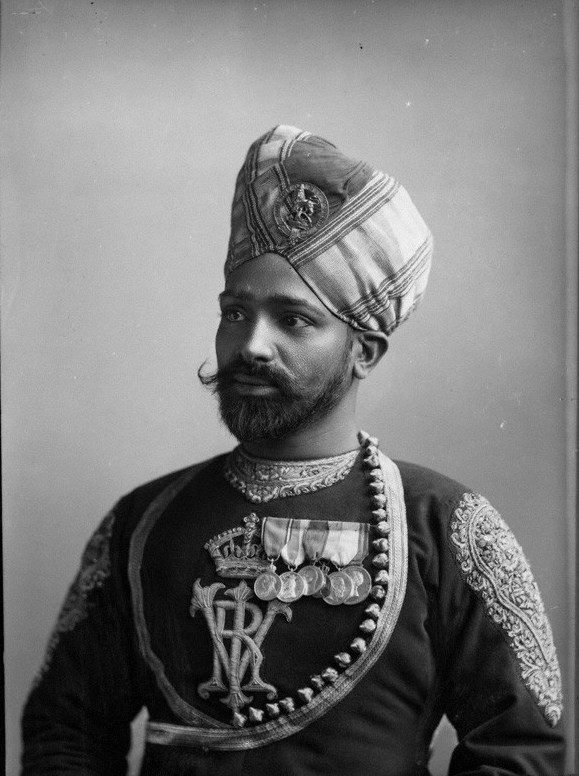 This handsome fellow was an attendant to Queen Victoria. He may be, though we are not certain, Ghulum Mustafa, who was a trusted member of staff. The image was taken in 1887, and shows him in household uniform, wearing numerous decorations, with the crest of Victoria boldly emblazoned on his chest in gold bullion work.  It was quite common for sovereigns to maintain members of staff who were to one degree or another exotic.  And in the case of Victoria, it was a visible symbol of the breadth of the empire.  Such uniforms as these also helped the process of styles moving from culture to culture, as the sight of them would invite utilizing aspects of them.

We think of tiaras and the like as being nearly always made of diamonds and other precious stones, but it is not always the case, like with this gorgeous, and unexpected Cartier tiara from 1922.  The rose gold frame is decorated with jet rectangles and arched red coral plaques.  At the upper rim, pairs of coral beads are bound with more jet.  Yes there are diamonds, but they take a back seat in this delicious Art Deco creation to the brilliance of color in the two primary materials. 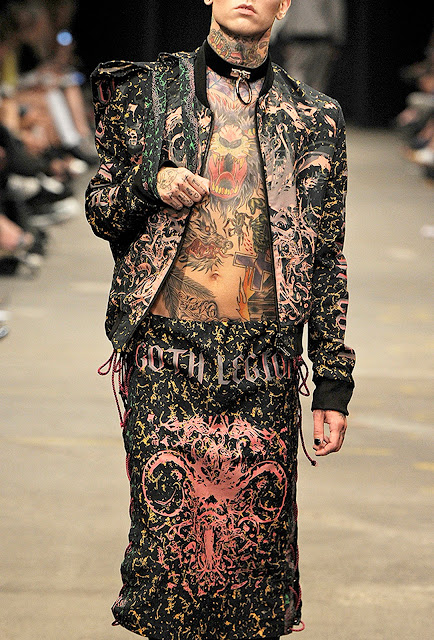 And finishing our cat walk of randomness today this outfit designed by Asger Juel Larsen in 2013.  It's a continuation, really of the post I did about menswear and the Avant Garde.  Actually, the only thing truly edgy still about this is the skirt, which appears to have a draw string and a cord stop, so it could be drawn tighter at the hem.  The fabrication, though unusual isn't really Avant Garde.  What makes this not quite successful in my eyes is the choice of model.  It is clear that the intent was to continue the pattern theme of the textile by using a model who is heavily inked.  What this does to my view of the ensemble presented is muddy the image so that I become unsure where garment and person stop and start.  If you wish to create a visual shout, then this is ideal, it is questionable whether the message shouted will be intelligible.

So get out there and enjoy the beginning of 2016.  Make it a year of positive change for yourself and for those around you, that at least, is my own goal.