So here we are again, back around for another go at digging through the detritus of my crammed little noggin.  For your consideration this week, 12 completely unrelated things, naturally. 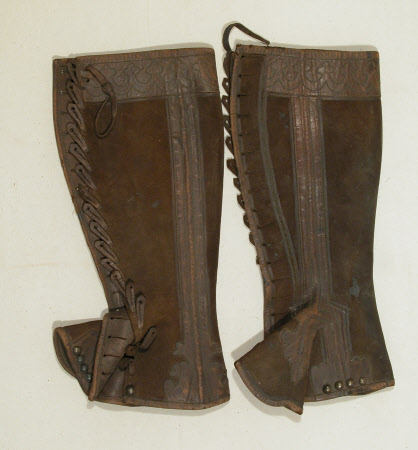 So, the term spatterdash is one I had been unfamiliar with, but it is the full term for spats.  These are a pair that date from the 17th century.  They are made of polished, and sueded leather, and close with e tightly spaced set of loops and buttons.  These look like they were meant for horseback riding, or possibly as an adjunct to battle armor.  I had also been unaware that spats had existed so far back in time, but after digging around have discovered that they were in use even before these were made in the 1600s.  They came into significant, widespread use first as part of military dress, to increase protection around the ankle, but moved into society during the Victorian period as a social symbol of class and wealth. 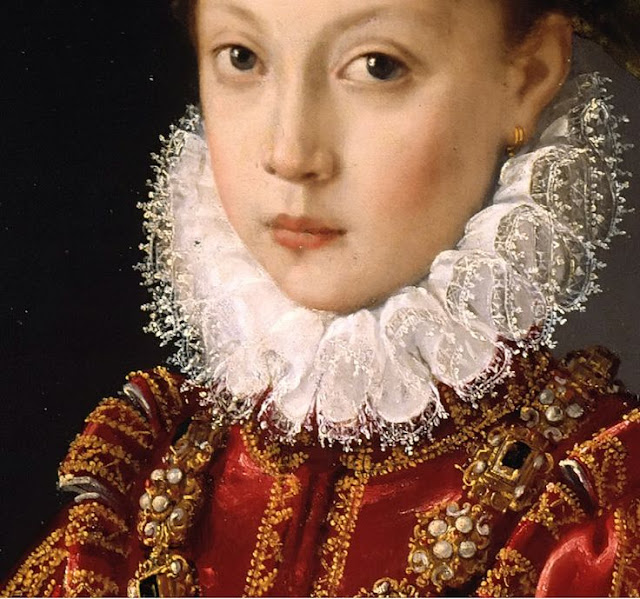 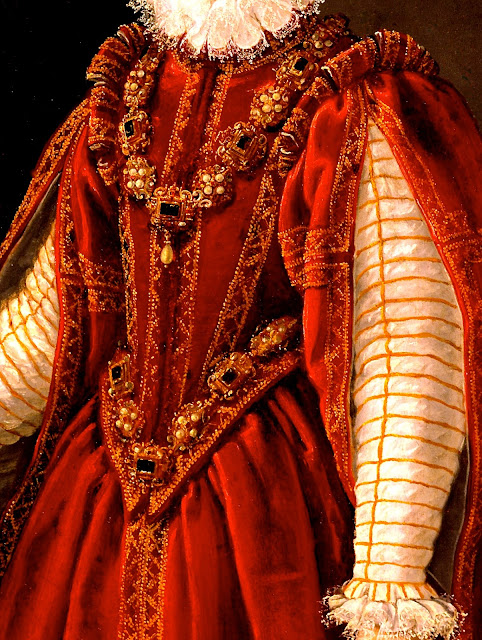 These two detail images are from a portrait that may be one of Eleanor de Medici, painted by Sofonsiba Anguissola.  I was particularly taken by the scale of the jewelry she wears.  The matching necklace and belt are both massive, especially for someone who appears to be small in stature.  It was the rule rather than the exception that jewelry be as big as possible.  Larger, and more of it, meant money, and power.  The modern concept of sublime restraint being equated with position was unknown.  This may not be Eleanor de Medici, but whoever she was in fact, she was a young lady of substantial fortune.  The gown of heavy silk velvet is embroidered in gold along every edge, and most of the seam lines.  Her quilted undersleeves are sewn with gold braid.  This was an ensemble of extreme cost, and excellent taste.  The mass of her jewelry works perfectly with the decoration of her gown. 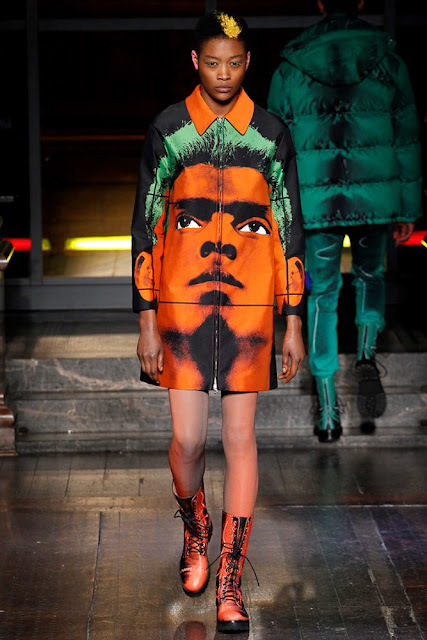 Moschino is a design company that is about in your face apparel, whether you like it or not.  This menswear look from the most recent F/W collection really pushes me.  There are things I appreciate about it, and things I'm not on board with.  I've never been a fan of the slightly shortened sleeve that seems to be around a good deal just now.  It looks awkward to me, because it doesn't look intentional.  However, the imagery of the coat is amazing and I could see this put together with a number of starkly simple items.  Showing it with no trousers, with the model wearing pantyhose certainly takes it further out there, but I do wonder at the mindset that presents what is meant to be fall/winter seasonal clothing in that way.  Clearly it is meant to shock.  Well, that certainly works. 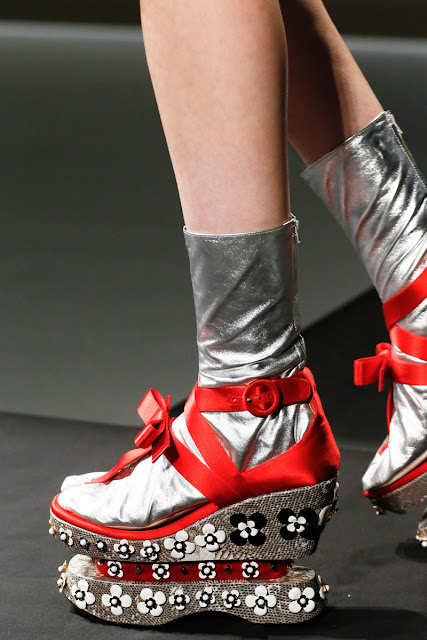 While we are out there, lets take a look at these.  Taking their cues from Japan we get a pair of metallic silver tabi socks with platform sandals.  This is meant to be a runway styling look, not a real work concept.  This is one of those time when I could see a version of this, distilled considerably, make it's way onto the streets.  In fact, I suspect it has in Japan.  Look at the essential shapes here, devoid of decoration and I think you will see what I mean. 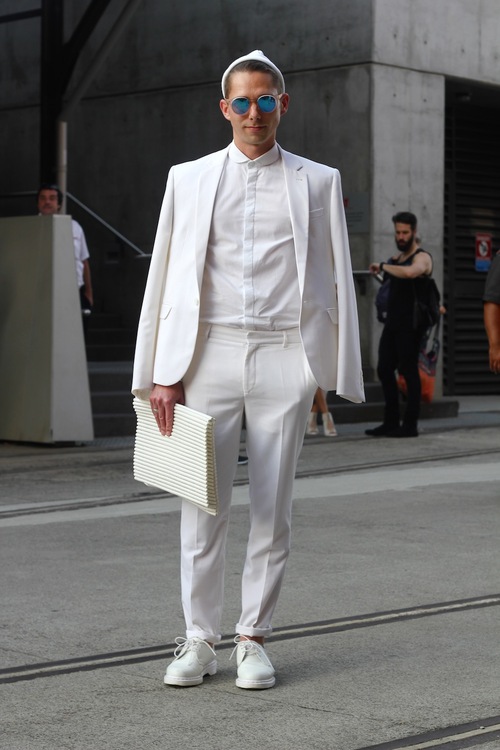 One of the things I find interesting about the notion of monochromatic dress is that it can be powerful in its impact.  Yes, it is easy to overdo.  But this fellow gets it right, top to bottom. It looks spare, elegant, and yet has a playful aspect because of the white knit cap worn tilted back.  I'm certainly not going to advocate for everyone to give such an idea a spin, it's tough to pull off.  You have to consider every item carefully.  If the proportions skew, or if the color isn't dead on throughout, it can fail terrifically.  Here the textures help to unify the unblemished white, and only the slight off tone of the envelope bag and the dense blue of his glasses punctuate it all. 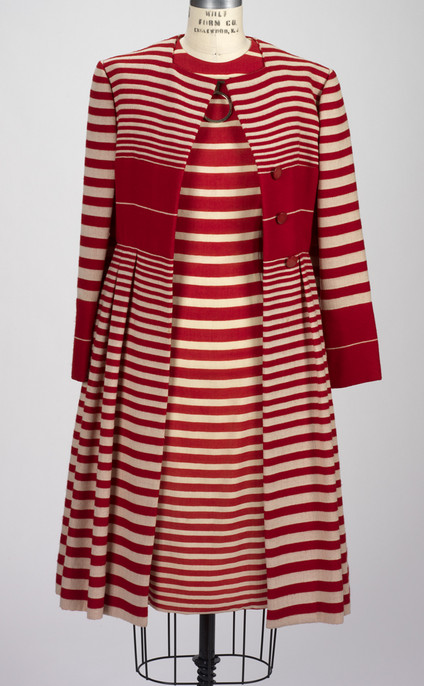 A major player in Attire as a communication medium is rhythm.  It can manifest in many ways to enhance the effect of a garment, and shift its meaning.  This dress and coat from the 1960s is a brilliant example of how rhythm can create a sense of vibrant motion. By manipulating the stripes in they way they have been, the maker gives us a route map for where the eye should go, and where it should rest.  It is sad, really that such techniques as this don't make it to the ready to wear market much. the excuse is always cost effectiveness, since making something like this work, requires precise handling of the textiles involved. 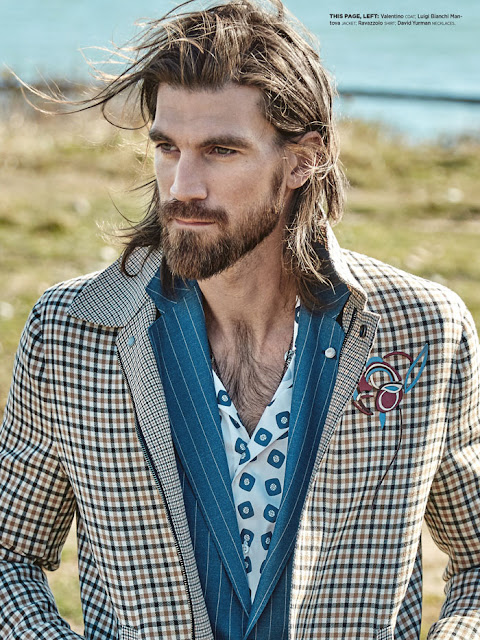 Four different patterns are combined here.  Why does this work in the way that it does?  The check of the outer coat is exactly four times larger than the smaller check of the coat's interior.   The stripe of the blazer is the same width as the check of the coat.  The squares on the shirt are the same size as the repeat of the check on the coat.  And the blue and white in the shirt and blazer are both present in the coat.  For pattern mixing to work there must be internal relationships that the eye can pick up.  When looking at this ensemble, (even when we don't consciously understand it), we do comprehend that this works. 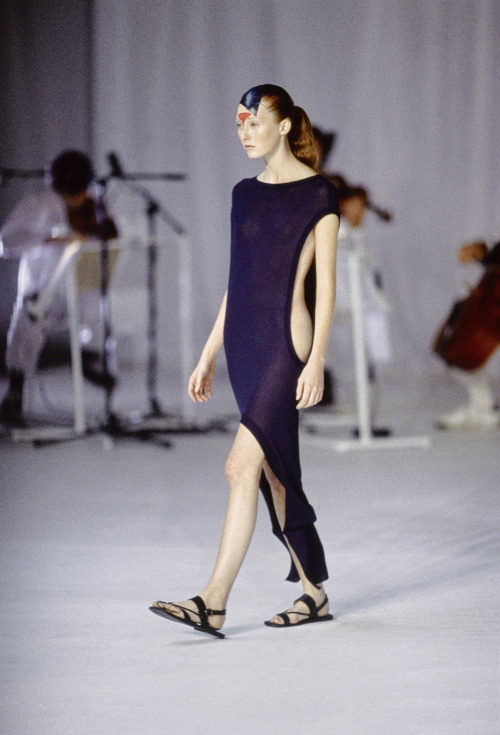 There were a few things that came to mind when I saw this Chalayan dress.  First was that I had done a costume once for a rather brash young lady that was essentially a loop of fabric that went over one shoulder, barely covered her breasts, dipped down to over her hip and than up to her shoulder around the back.  At the time it seemed wildly edgy. I suppose it still would be.  This dress accomplishes something similar.  And it made me think too, about how our feelings about public nudity are shifting.  Sure, it is long and long before we all take being nekkid in public as a normal thing, but the shift is happening.  Part of it is both fueled by, and expressed by the Attire language, as more garments get created that expose more of the body to view.  It will be interesting to watch. 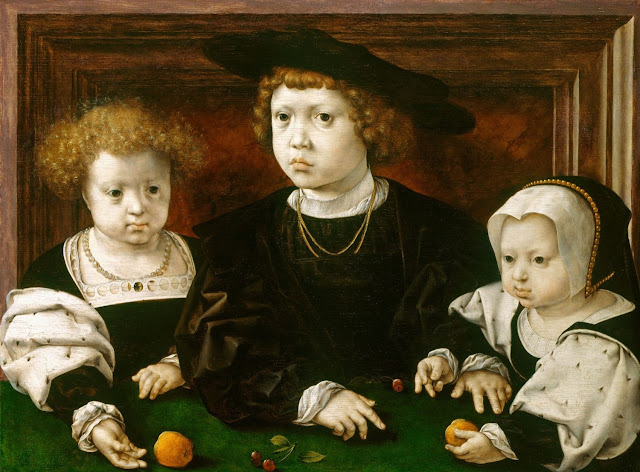 We tend to forget that the strict rules used to govern mourning were not simply the province of the adult community.  Children were required to comply as tightly to the regulations for mourning as much as their elders were.  In 1526 Isabella of Hapsburg, who was Queen of Denmark, passed away suddenly.  She was survived by her three children, pictured in this portrait painted soon after her death.  Dorthea, John, and Christina are all wearing official mourning, which allowed, after 3 months, the addition of white to the wardrobe.  It is interesting too, that they are all dressed exactly as adults of the time would have been, a situation that did not begin to change until the late 1700s.  The only concession to youth is Dorthea's bare head.  Why she was painted without a headdress while her younger sister wears the early version of the gable style is unknown. 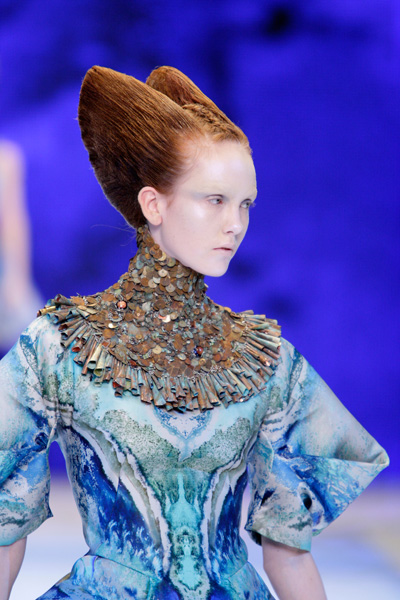 This detail image is from an Alexander McQueen ensemble from his final collection.  The reason I put it up here is the combination of color, pattern, and texture here is utterly beguiling to me.  The combination of the high technology printing process of the digital textile, and the hand craft of the copper collar, bridges something profound about us as humans.  It speaks to our beginnings and to our future at the same time.  Plus, it is undeniably lovely. 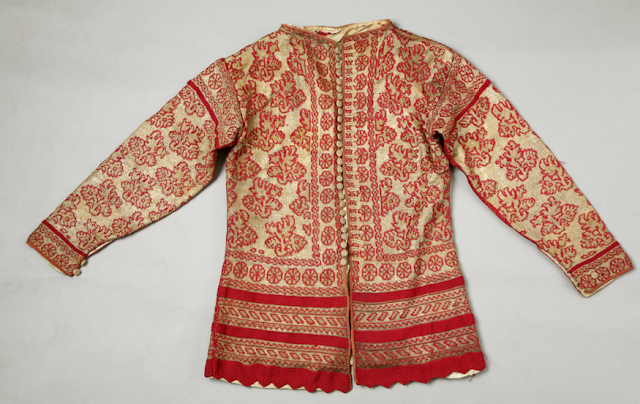 An unusual object, this.  This jacket for a woman is from 1580.  That alone makes this rare enough.  The thing that really makes this singular is that it is knitted.  Knitted garments are incredibly rare survivors. The knitted portions mimic the complex design of luxurious brocade materials popular at the time.  The knitting is quite fine, and all of it has been mounted onto a silk backing of brilliant red.  The lining, also of silk, is off white.  This practice gives the knitting more firm structure, so it can appear more like the stiffer textiles in use, plus it adds both to the warmth of the garment, and its potential lifespan.  Such a jacket could certainly have been put to use for outdoor wear, but was more likely meant for keeping warm during the cold months of the year, indoors. 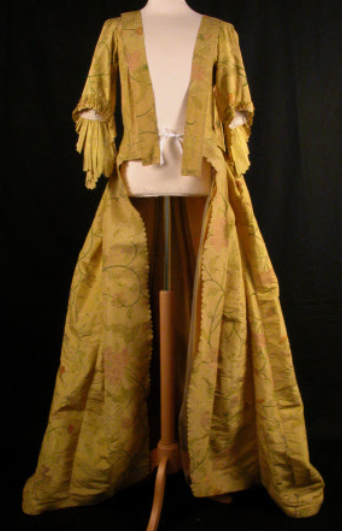 I almost never show you things that have really significant damage, because I want you to get a sense of what a time and place was about, and to better discuss whatever might be the topic to hand.  This image is what the huge majority of surviving clothing looks like, even after it has been well conserved.  This dress in the robe a la Francaise style is from England in 1730.  Its trimmings are gone. The pleated robings on the front end unevenly, and do not continue to the floor as they would have at the time.  Who knows why it was chopped out to remove them in such a way?  It was quite common to give clothing to servants when they were no longer desired, or to allow the children to play in them.  So perhaps it happened that way.  It may also have been used as part of a fancy dress costume, and then discarded.  But this is what is the reality of most apparel that manages to survive at all.  The glorious things I show you here are by far the exception.

So, that's that for this week.  Go on out there and enjoy your weekend!