Here we go, Kiddies, another edition of our favorite weekly treat. Scattertime! 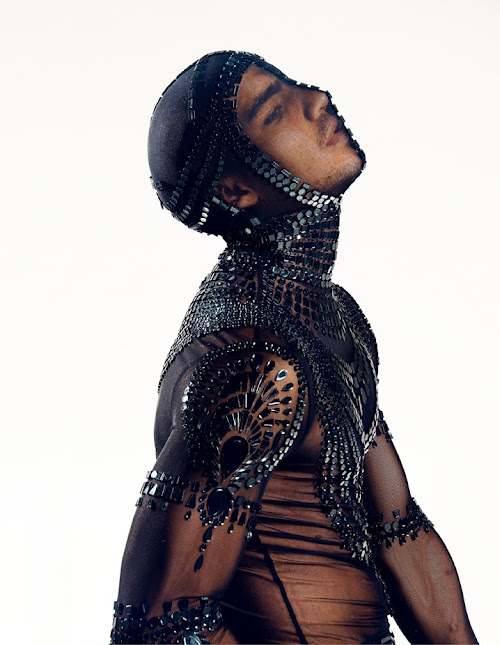 It was, I suppose an inevitable event that the sheer thing, and the embroidery thing were going to move over to the menswear camp.  This image when I first saw it caused an audible to escape my lips.  Partly, I admit from how stunning this fellow is, but also because this garment is amazing.  It is transformative in aspect. It both embellishes this man, and creates him anew as something not quite human.  The work itself is admirable, elegantly conceived and interestingly placed.  I approve.  I want to live in a world where men get to dress like this for reals. 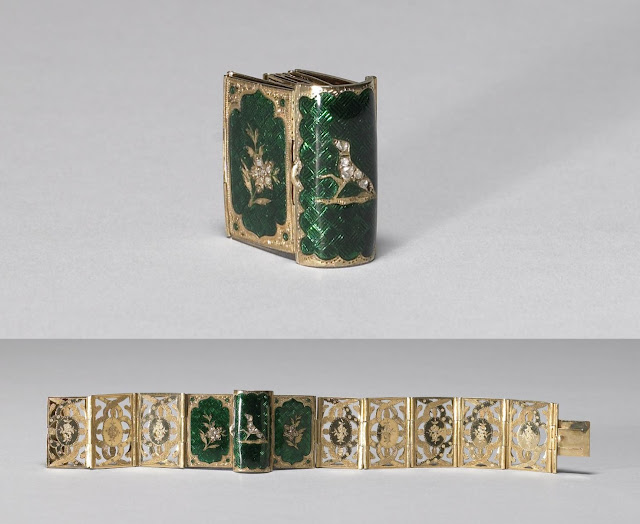 I suppose this unique object would be perfect for travel, since it would pack away so neatly.  It's a book bracelet, made in England around 1840.  It is made of gold, with green, translucent enamel. The spine has a hound, the cover, and leaves have floral sprays, each accented with diamonds. It is a charming object, and one that evokes both it's time, and it's place of origin.  It is interesting to me how an item of apparel can call to mind such things.  It is another expression of the power we have invested our clothing with. 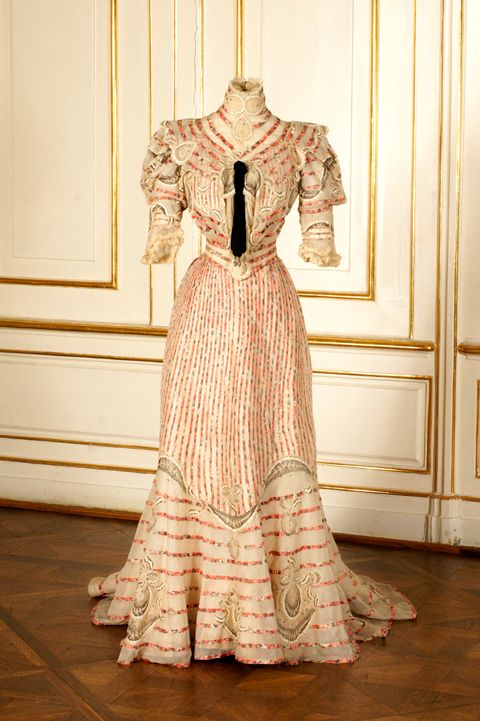 Empress Elizabeth of Austria wore this lovely confection of a dress in the 1890s. She was wife to Fanz Joseph I, and she was much famed for her beauty, her abundant dark hair, and her minute waist, which stayed with her to the end of her days.  This dress was made for resort wear, so it's a trifle more playful than would normally be allowable.  And the black tie references a sailor suit just enough without pulling out all the sailing tropes.  This dress is also a monumentally complex one, full of lace insertions, ribbon work, embroidery, applique, and ruffles.  Her lady's maid must have hated this frock. 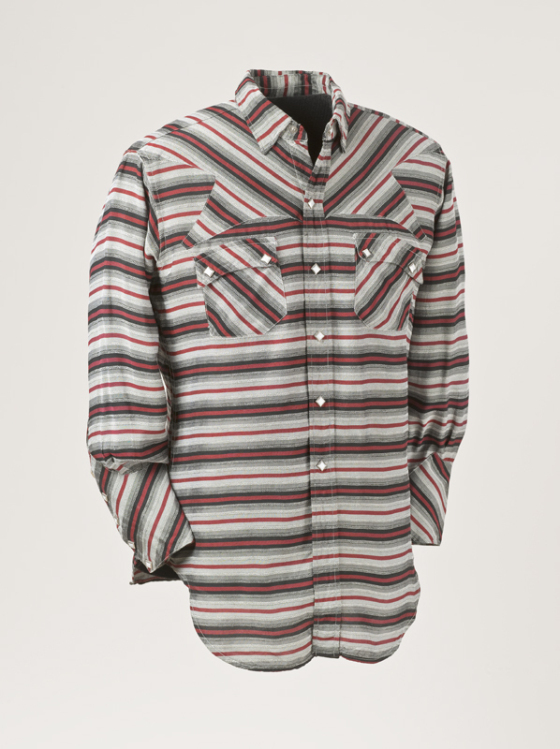 Looking at the interesting cut, and bold striping of this shirt you might be deceived about who designed and made it.  This was created by the Levi Strauss company in the 1950s.  It is a cotton and rayon plain weave shirt with square snap buttons mounted diagonally so that they mirror the angle of the pocket and yolk striping.  This shirt, though it's over 60 years old now, has considerable edge to it.  Take a look at the depth of the sleeve cuffs, with their pronounced points.  It's a great looking garment.   It's also an interesting look at just how much more detail and care went into ready to wear back in the day. a good deal of attention was given to the placement of the stripes and the proportions of everything involved in the design.  You have to get to the pret a porter level now before you see this sort of thing. 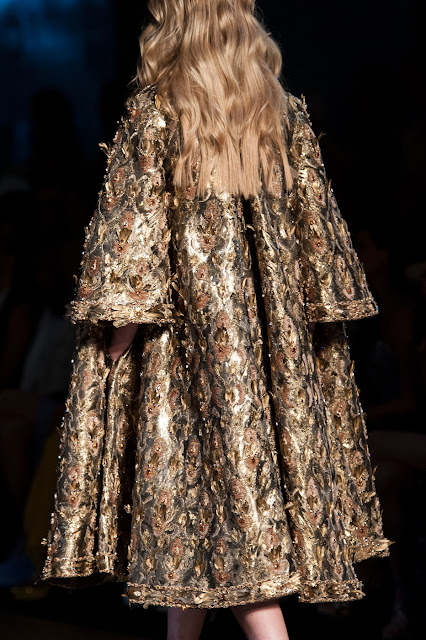 We don't get to see a real deal evening coat much anymore.  Our culture has become too informal for them, I suspect.  But this delectable piece of coat porn is from the design team of Ralph&Russo.  Made in a glorious gold brocade, with beadwork in high relief to give it more texture, it's a classic swing coat given new life and considerable presence.  Anyone wearing this work be envied, and sought after.  Hell, I'd wear it.  It does make me think, with a certain wistfulness about how little effort we really give to going out in the evening anymore.  Sigh. 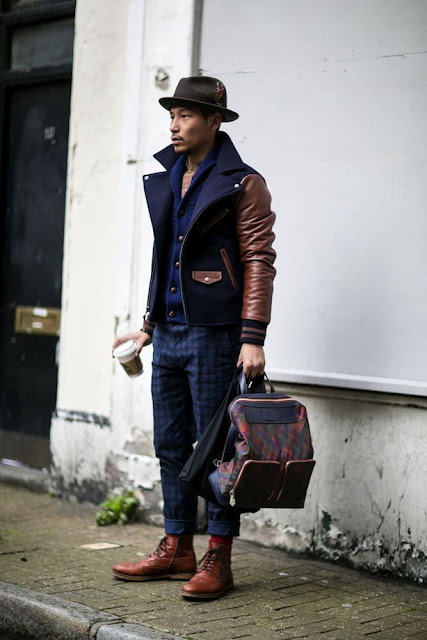 Street fashion.  It used to be the case that it was entirely anonymous, and unremarked upon.  Then, in the middle of the 20th century the growth of the youth culture spurred an interest in what the young were wearing, because they had an amazing amount of money to play with. Manufacturers, and designers suddenly started creating clothing for that market exclusively.  But what began as a reaction to the newly affluent young, quickly became a going concern that now drives the greater part of the apparel industry.  Coupling that with the increased flexibility of apparel choices in the workplace, and the greater sense of the casual means that the street, in all it's forms, is now the strongest influence in the Attire language. 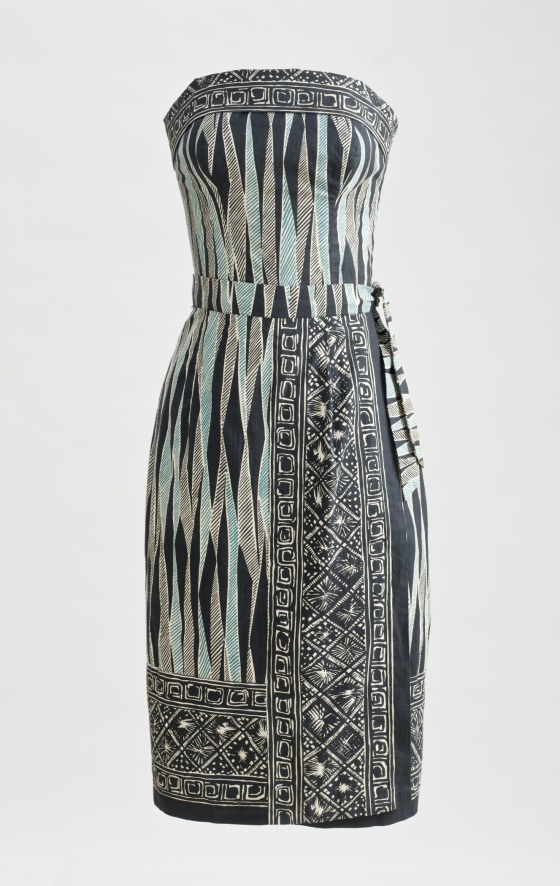 Now, here's an Attire word that has entirely vanished from the lexicon of spoken apparel words.  The play suit for women.  Essentially a bodice with attached shorts, the playsuit was meant for outdoor activity, and sport that did not require special clothing, like swimming, or skiing.  This one, called "Drumbeat" was designed in 1947 by Louella Ballerino. Its made of a plain weave cotton print with a strong African tribal influence.  The playsuit comes with a wrap skirt that can allow it to go from the beach, to cocktails, or a casual dinner. 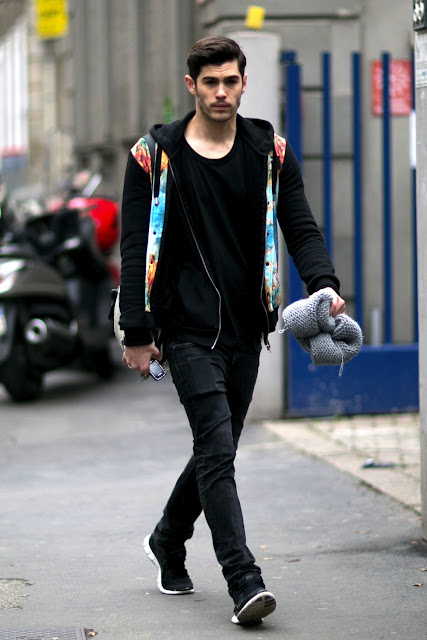 Meanwhile, back at street style,... I suppose that one of the reasons for the use of so many knits and softer materials in street style like this is the speed with which we move through our days now. Our lives are crammed to bursting with commitments of time and place, so being maximally comfortable seems a logical result of that situation.  The seeming knee jerk response is the black uniform of jeans and hoodie, here given some dash with a brightly printed vest. The all black thing, of which I've written before is a real time way to deal with looking put together without having to give it  much time and thought, since we are all so over-extended already. 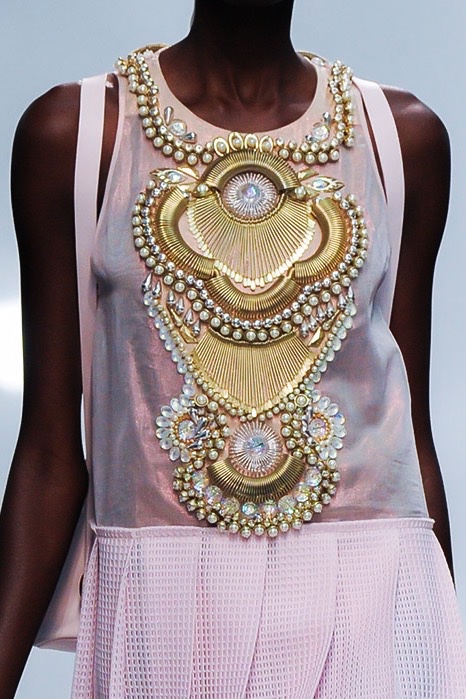 Next up, a detail image of an effort from Manish Arora.  I'm posting this because the embellishment work is really breathtaking, and expertly done in every respect.  I love the scale, the dimension, and the positioning of this work. It recalls to my mind some of the more elaborate parade armor that was produced between 1500 and 1800.  What I also see here is subtle reference to the chakra points of the body, so there is, for me, anyway, a connection to matters of spirit and feeling, as well as the protective nature of armor. 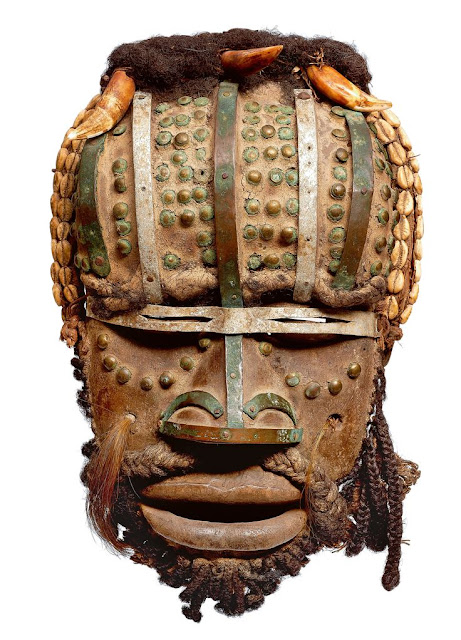 This is a Grebo mask. It comes from the Ivory Coast of Liberia.  The Grebo people are a sub-group pf the greater Kru people of Western Africa.  This mask intrigues me because, unlike so many tribal masks that attempt to create a semi-divine or animal appearance for the wearer, this one is nearly realistic in its portrayal of a male, down to the braided beard and the ritual facial welts.  I've been unable, so far, to find out what the metal bands mean, whether they are a kind of armor, or if they have other significance.  But I'm going to keep digging and if I find out more, I will share it!  regardless, I find this beautiful, and compelling. 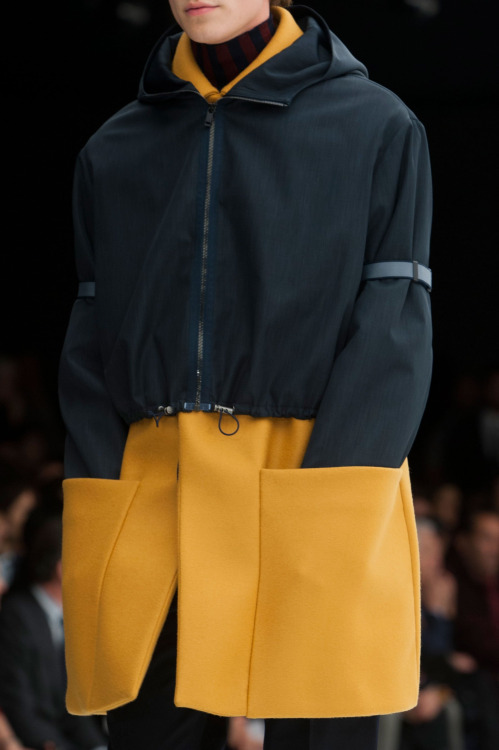 Z. Zegna, Fall/Winter Menswear 2014.  I was much taken by this idea.  I like how the yellow wool melton coat gets a second life with the addition of the waist length, hooded windbreaker.  It is an interesting take on wet weather gear and I like the interaction of the two differing textiles.  This is an idea that could move forward into more common usage, since it could be made up at any price point level.  Or, more simply, this idea could be configured by anyone from existing garments in their wardrobe, with a bit of consideration to proportion and finish. 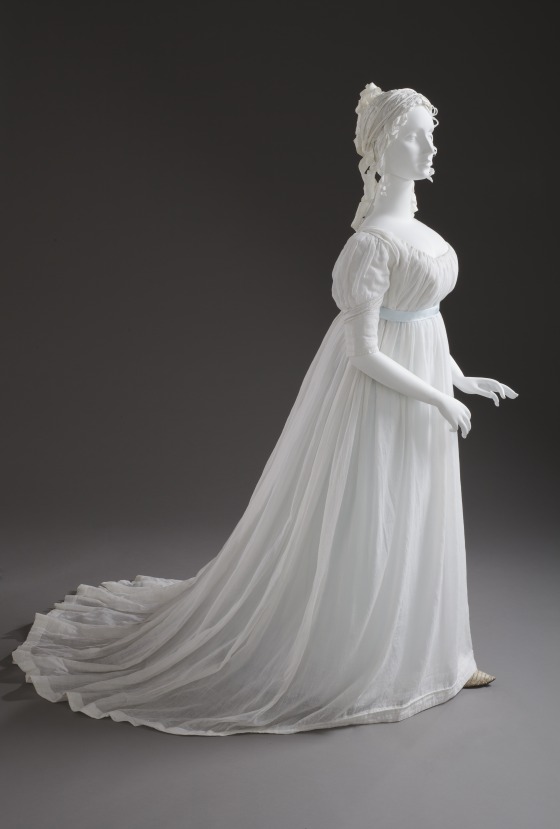 To finish up today, this sublimely simple gown of cotton muslin from 1800.  To our eyes this looks innocent, ladylike and quite demure, but when dresses of this nature appeared they were a shock to the society.  Unadorned, made of plain stuff, these gowns were in direct contrast to the overblown, wildly decorative costumes that had been the fashion.  They were also a phenomenally comfortable, easy way of dressing that was one of the first glimpses women were to get of the freedom they would eventually be allowed.  Sure, such simplicity as this did not last long. We can't resist elaborating on an idea once we get one.  So these light, airy gowns, within a decade were weighted down with detail. But for a short while, this effortless looking clothing reigned, and women could move a bit more easily.

That's all for this week, folks!  I hope you had fun.  Enjoy your weekend.