The scatter post is one of my favorite things, even though it takes a good while to write.  It's fun.  And I get to share so many things with you all.  So here comes this week's edition!
Ready?
Set?
Let's Go! 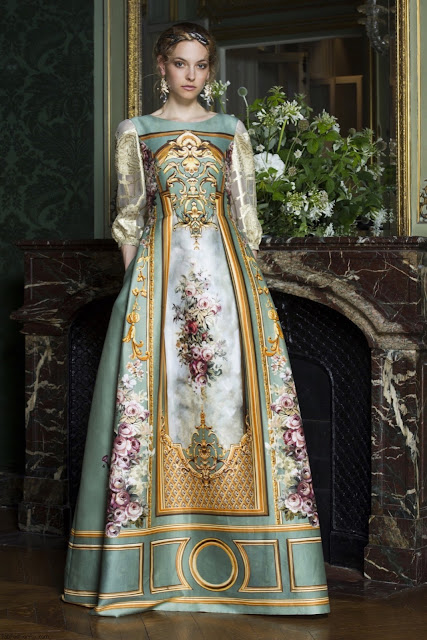 Surely the interface between architecture and apparel is obvious, but rarely is it made so blatant as in this Alberta Ferreti evening dress.  Using digital printing techniques, the designer has taken the structure and decoration of rococo walls and applied it in a literal fashion to a garment.  The result, which could be confused and overwrought, works beautifully.  It is all about the scale and placement of the imagery that it works so well.  And that is why I wanted to share this.  It's a terrific example of how much the position and size of decorative details means to the final expression delivered by the garment.  The simplicity of the cut of the dress is vital, too, to the final effectiveness.  The print is so vast, and complex that anything interrupting it would diminish the ability of this piece to communicate. 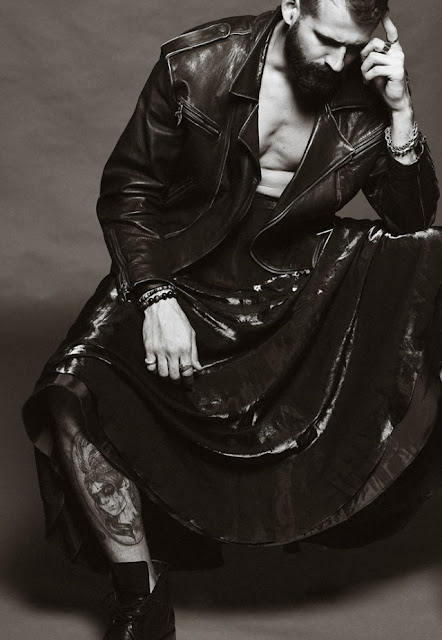 The design community has for decades attempted to move skirts into the line up of accepted menswear and every time it has misfired, to my ind because of one major flaw in presentation.  They didn't bother to make them look sexy, hot and very male.  Finally designers and stylists of fashion shoots have figured it out.  If you want a guy to embrace the idea of wearing a skirt, then it has to be shown to him in a way that will allow him to see it's potential to up his "guyness".  In this case we get four jolts of guy stuff to bring the point home.  Leather motorcycle jacket? Check.  Shirtless buffed model? Check.  Beard? Check.  Heavy black boots? Check.  This is a good part of why the skirt idea is finally moving outwards further into the useful vocabulary of men's Attire words.  You can look for a post about the failures of the prior decades soon. 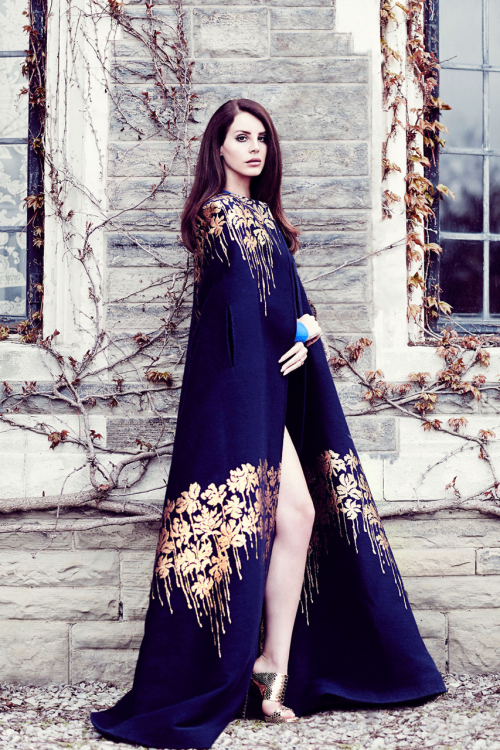 Why is it that a cape is so unfailingly dramatic to us?  It comes down to a simple notion.  Our eye appreciates the broad stroke that is a long sweep of unbroken line like we get from a cape.  If Diana Vreeland was right that "the eye must travel" then the journey here is a simple easy shot from the ground to the face.  The secondary reason we find them so appealing to look at is the huge expanse of material creates a lot of area that can be decorated, as it is here so elegantly.  It is true that a full length cape like this has little if any place in 21st century life.  We move too quickly and carry too many things with us for it to make sense.  Still, gimme a cape any day to make a bold entrance or exit. 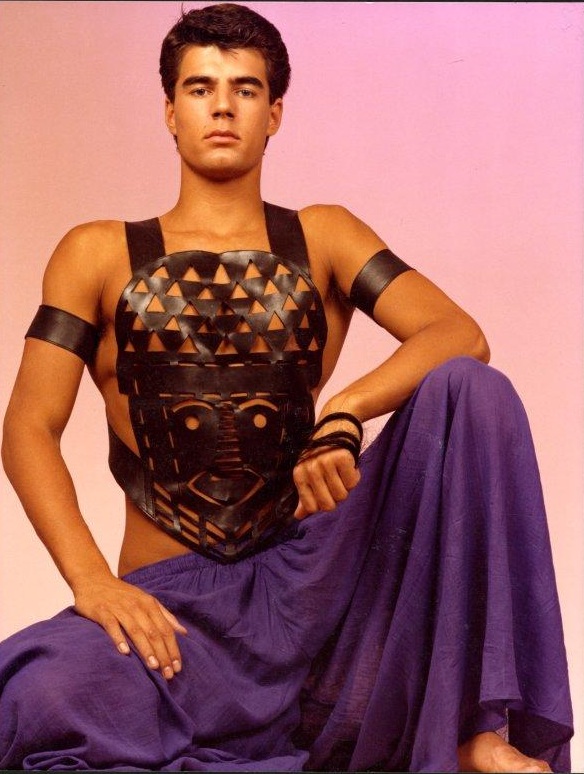 Designer Dirk Bikkembergs created this edgy little number in the 80s.  A pair of vast purple cotton gauze pants, and a cut leather cuirass for a top piece.  As an experiment, I think it's laudable.  And I could even imagine there would be environments where it could be worn, like as beach wear in tropical climates.  Since the leather is so cut through it could still be comfortable.  The idea of the cuirass piece is what I find most intriguing.  I could see this translated, using current laser cutting techniques, into something that could have play as club wear, or casual wear as an alternative to a tank top.  Hmmm. I has thoughts in my head.  Thoughts. 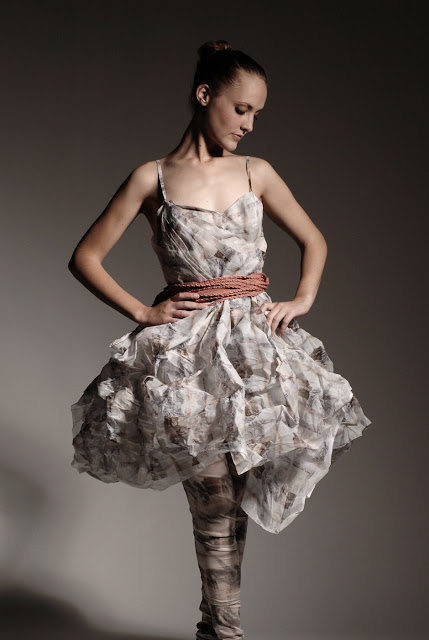 Made of reinforced tissue paper, this is yet another effort to bring paper back into play in the apparel world.  The only problem with paper clothing is longevity.  They really have none.  Worn a  few times, even reinforced paper would start to split and look shabby.  So, until they can come up with a way to make paper more long lasting, it will remain a wanna be textile, and an avant garde play toy, not a functioning part of Attire. 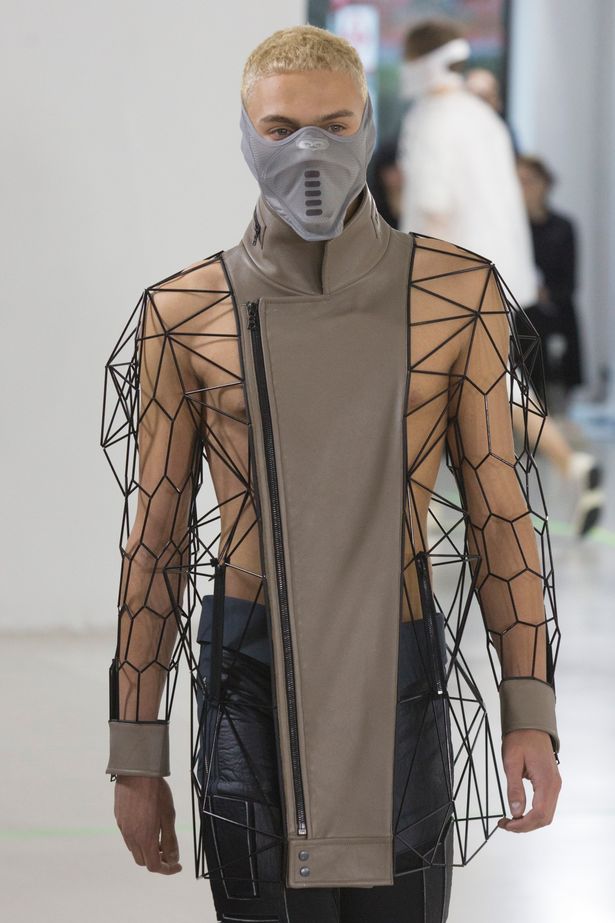 There are times when even I find an avant garde piece perplexing.  It is an interesting experiment in structure I suppose.  I just don't get where this could go in real world terms, how it could be altered to function in the Attire language.  Perhaps if has been presented with a shirt of some sort under it it might feel more translatable.  Still, I love experimenters, even when I don't get what they are trying for. 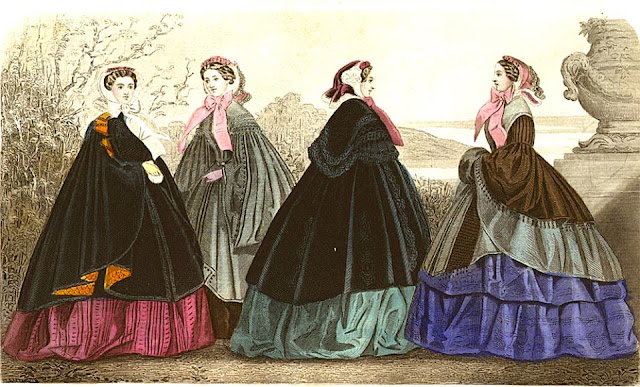 Godey's Ladies Book was THE fashion periodical in the United States in the 1800s.  They disseminated not only the latest styles, but advice on social behavior, correct dress, sewing techniques, and other ladylike concerns.  This image is from the November 1859 edition. Each printing included a number of hand colored plates like these.  This one depicts correct and fashionable outerwear for the fall winter season.  Because of the enormity of women's skirts at the time cloaks were the most common outerwear.  But, as you can see here, there were also coats that cut in towards the waistline, to mirror the shape beneath.  Any way you slice it, moving around in all this must have been quite a task. 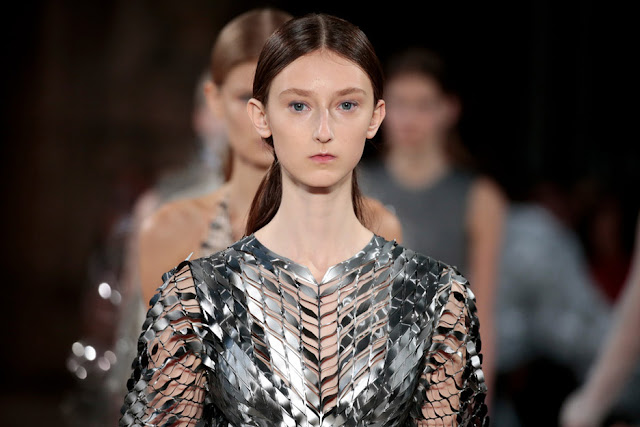 Part of what moves the Attire language along is the introduction of new textiles, that allow for new construction techniques, new finishes, and new textures.  This is a detail image of a dress by Iris Van Herpen.  I love the mylar mesh textile and how it moves over the body revealing, and concealing. I would imagine that that function of opening and closing shifts constantly as the body moves, creating something that is hypnotic to watch.  I could also see this textile being employed in more conventional means as a decorative accent on a garment.  Sometimes something new like this makes my head spin with ideas. 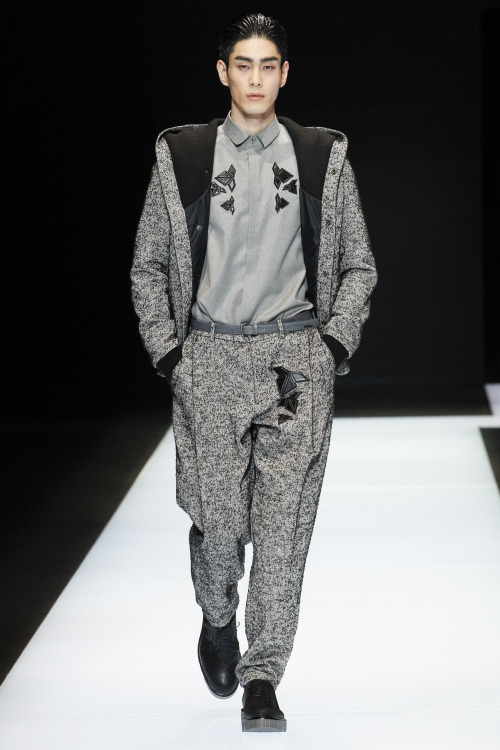 Here's another example of the slow steady morphing process that is a living language in action.  Our culture has become, and continues to become more casual with regard to apparel.  Sweats and hoodies are de rigeur parts of a modern wardrobe, where they would never have been worn outside of the gym 50 years ago.  So it is an inevitability that the notion of sweats would get mashed up with suiting in order to create a city dressing style that is at once comfortable, but just a touch more dressy.
Do I think it is completely successful as a combination of concepts? No, not really.  But I do love that it exists and that we are continuing to play with ways to mix the two seemingly disparate ideas together.  This is Emporio Armani, Fall/Winter 2016. 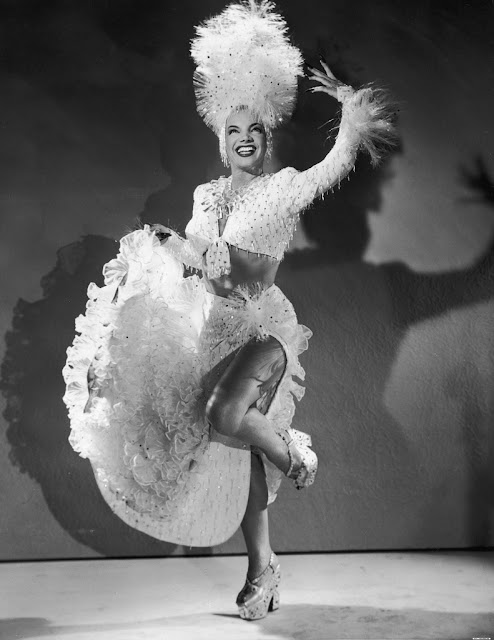 I've many times written about transformation and human nature.  Our desire to become something other than what we are.  Few personalities from Hollywood's golden era could more exemplify this than Carmen Miranda.  She was actually Portuguese, but made a name for herself singing and dancing Samba in Brazil, eventually coming to the US and performing on stage and in film.  Her "Brazilian Bombshell" persona was one she actively encouraged in order to forward her success, but later in her career she tried to break free of the restrictions it and the film community imposed, with rather limited results.  Her she is in full Carmen rig out.  Ruffles, spangles, platform shoes, and a headdress as high as the Chrysler Building.  She created a cartoon version of South America, that people found appealing, and it helped to spark a huge wave of interest in Latin culture in America. If she had been dressed more quietly, we would never have heard of her, regardless of her talents, which were considerable.  It was how she chose to change herself up that got people to at first, look, and then to listen. 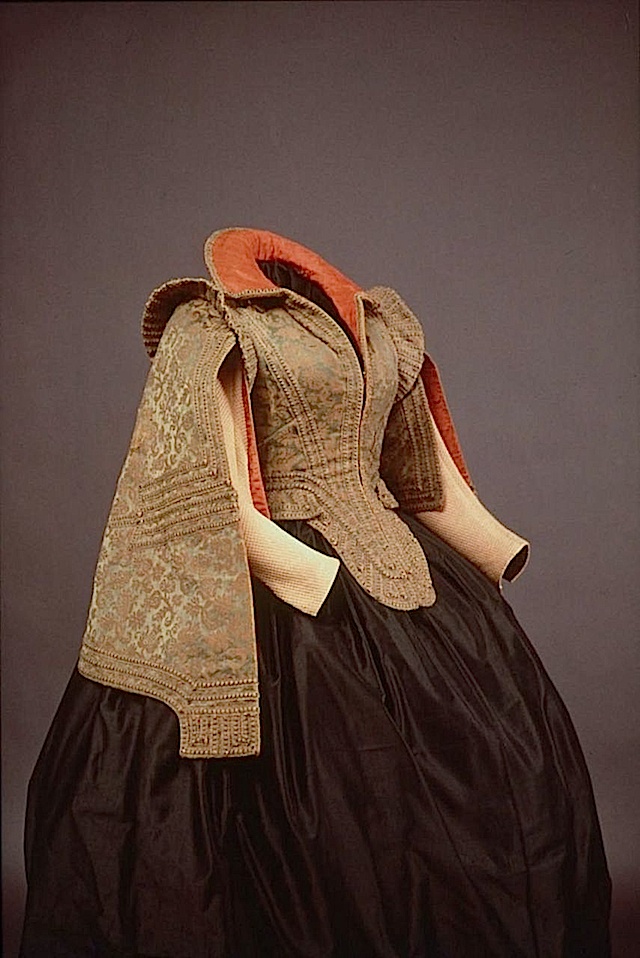 Marie de Medici was one of the most powerful women in Europe.  Her marriage to Henri IV ended abruptly the day after her coronation, when Henri was assassinated.  She became regent for her son Louis XIII till he came of age.  Her political action didn't end there, she spent her whole life embroiled in intrigues and machinations.  This dress bodice with attached over-sleeves is one of the few remaining garments owned and worn by her.  (The skirt and under-sleeves here are just in place to complete the silhouette).  The out-jutting collar has a built in supportasse to hold the broad lace collars then in vogue.  The bodice was originally a bright blue and gold brocade, but blue dyes were notoriously unstable, until the invention of aniline dyes. The lining similarly has faded from a brighter red, to this more salmon colored tone. 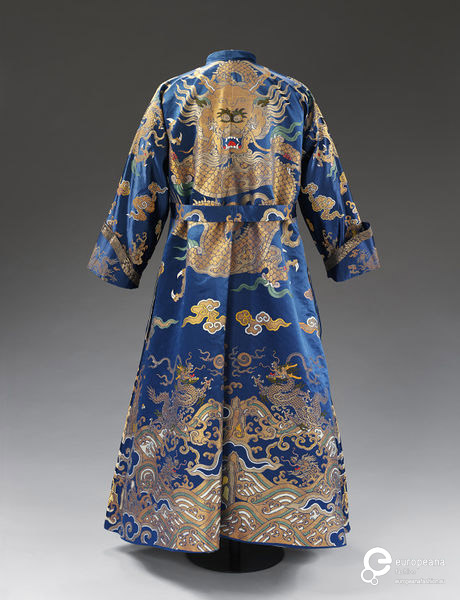 And to bring up the rear this week a gentleman's banyan, or chamber robe.  This one was made between 1780 and 1810. The material used was an actual Chinese Dragon Robe, that was obviously imported at considerable expense.   Owning a banyan like this would convey to visitors the wearer's education, and possibly his having traveled extensively.  Things Chinese were quite popular at the time, since trade with China had increased to the point where articles were getting spread more broadly in Europe.  Textiles, household goods like china, and decorative work on walls and ceilings all felt the influence.  This spectacular banyan is just another example.  Would I wear this?  Is that a question?