Its Scattertime again!
One of the reasons I like doing these now and then, is that I find so very many things in my searching, that I can't get to all of it, so I squirrel things away for other times, and this gives me a chance to let them get seen and talked about.
First up, something quite off the beaten path.  This NASA spaceflight suit is well worth looking at because its a synthesis of function and design we rarely see.  Even at the couture level, the amount of forethought, specialized workmanship and precision is unknown.  When a person's very survival in an environment that resolutely refuses to support life depends on every single element being perfect, its a kind of garment construction none of us will ever encounter.  Not one single part of this garment was pulled off a shelf somewhere.  The fabric had to be invented, the metal seal rings designed, cast and fitted to amazing tolerances; in short everything you are looking at didn't exist prior to the need for this type of suit. 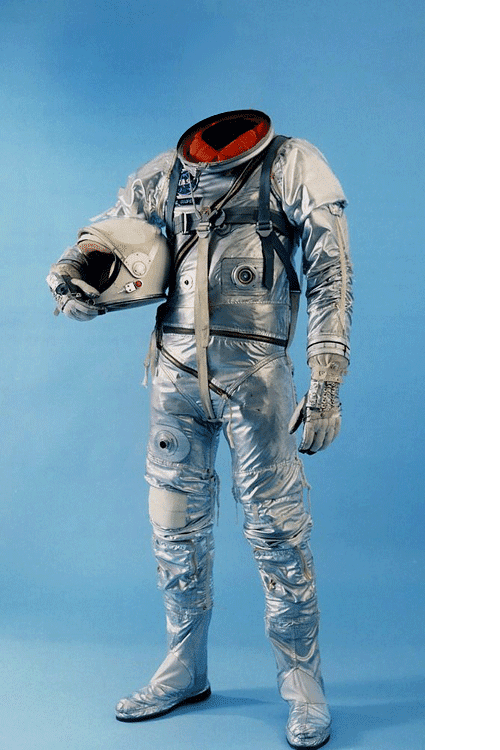 This court dress is noteworthy for two reasons, first it is one of the only surviving garments known to exist that belonged to Marie Antoinette of France. Virtually all her extensive wardrobe was either seized or destroyed by the mobs who stormed Versailles. The second reason is that it is also one of the only examples known to exist of the design work of Rose Bertin, who operated as the queen's unofficial Minister of Fashion. In white silk satin, completely embroidered over it surface with a pattern of ribbon swags and chains of flowers, its a gorgeous piece of work, and a testimony to the skill of the many people who worked for Bertin. 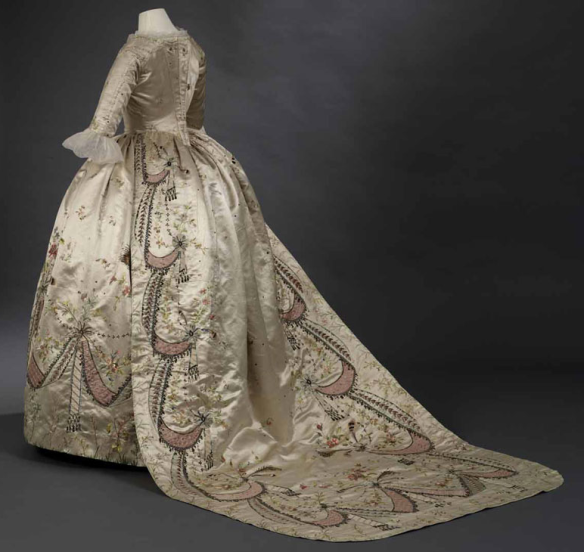 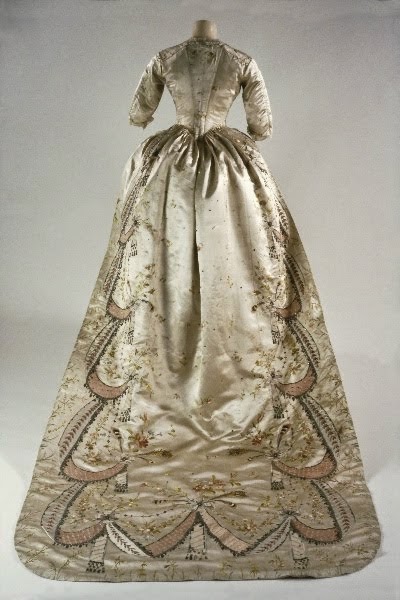 As a garment this ultra-cropped tee is absurd in the extreme.  It performs no function really besides that of displaying the worked out chest its wrapped around to great effect.  The reason I post this, really is that its emblematic of an interesting social change that is emerging on runways.  Men as completely objectified sex images.  Never before now have men been presented in the fashion world in this way, whereas women have been dealing with it forever.  Tit for tat, say I. 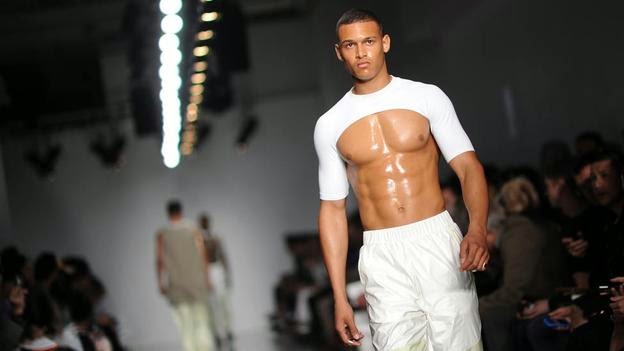 Ossie Clark was one of the fresh voices in the 70s who was designing something for women that was easy, subtly sexy, and nearly devoid of the badly realized retro references that plagued most of design at that time. This tunic and skirt combo from 1972 is sweet, young and appealing.  It must have been delicious to wear something that easy, and free moving. 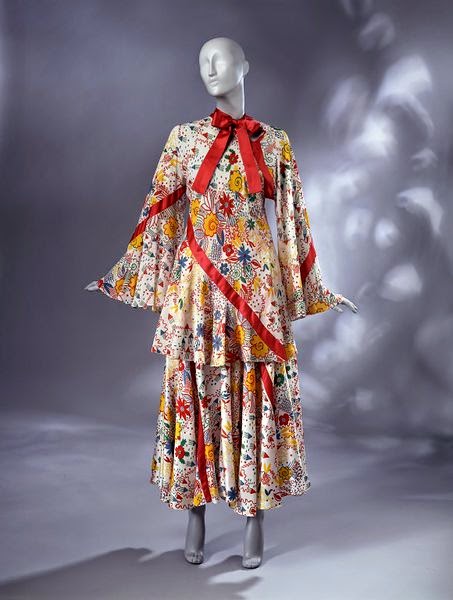 Yohji Yamamoto, F/W 2014 menswear collection presented this look on the runway.  It appeals to me for a number of reasons. I like all the individual pieces, and I even like them in combination.  In real world terms, I would probably want the rope details on the coat scaled back a good deal. But the coat itself is great. I also love the layered, skirted ensemble underneath the coat. And I even love the boots, which I must admit to wanting pretty hard.  But for me, the most salient thing that makes this appeal to me is the crossover nature of it.  Its blurring gender lines, and I love that. 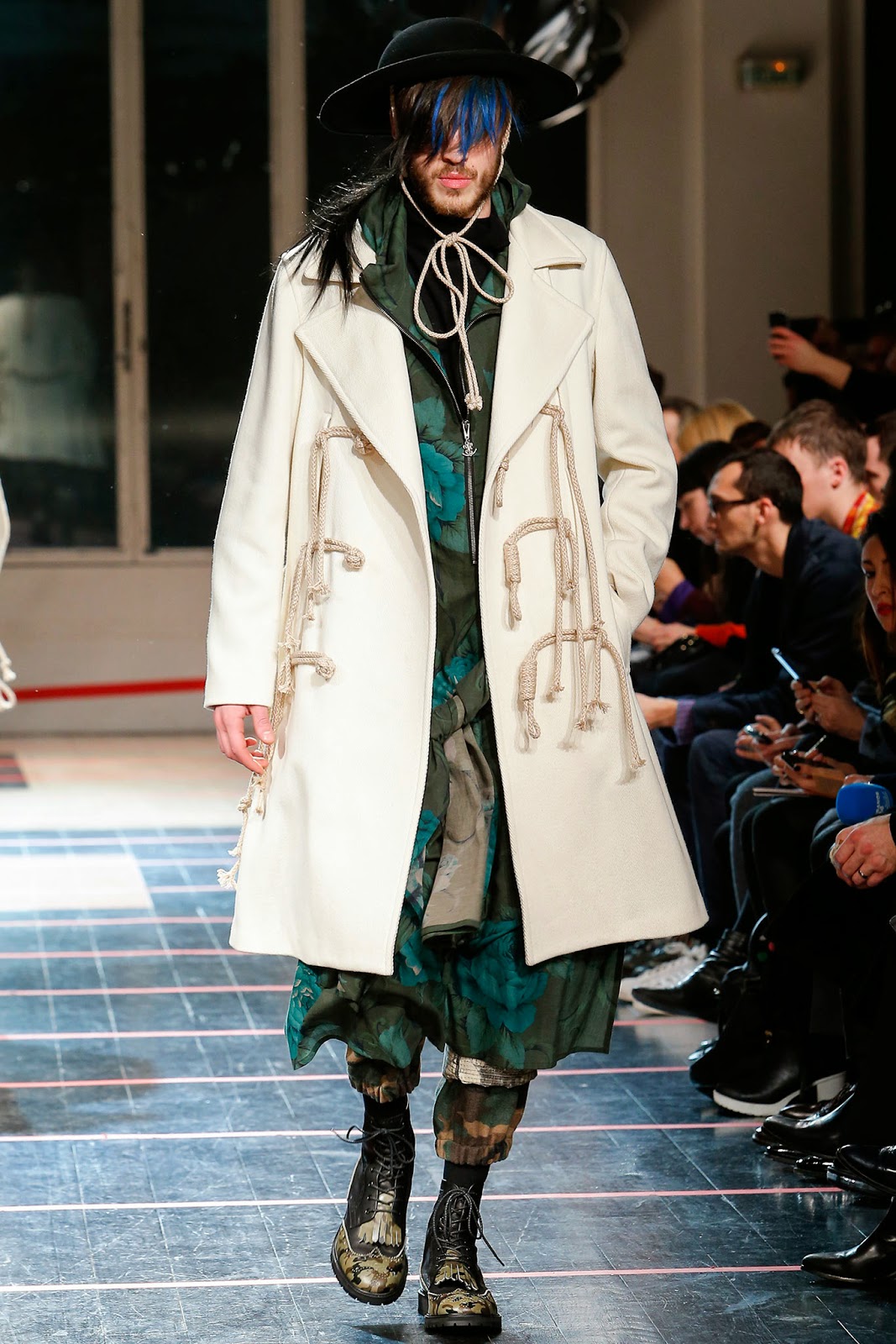 This woven pearl brooch is from 1820. The intricacy of its design, and the flawlessness of its making up make it a worthy piece for this Scatter.  Sure, to modern eyes it seems fussy, but placed on a simple dark colored top and it would sing out loud. 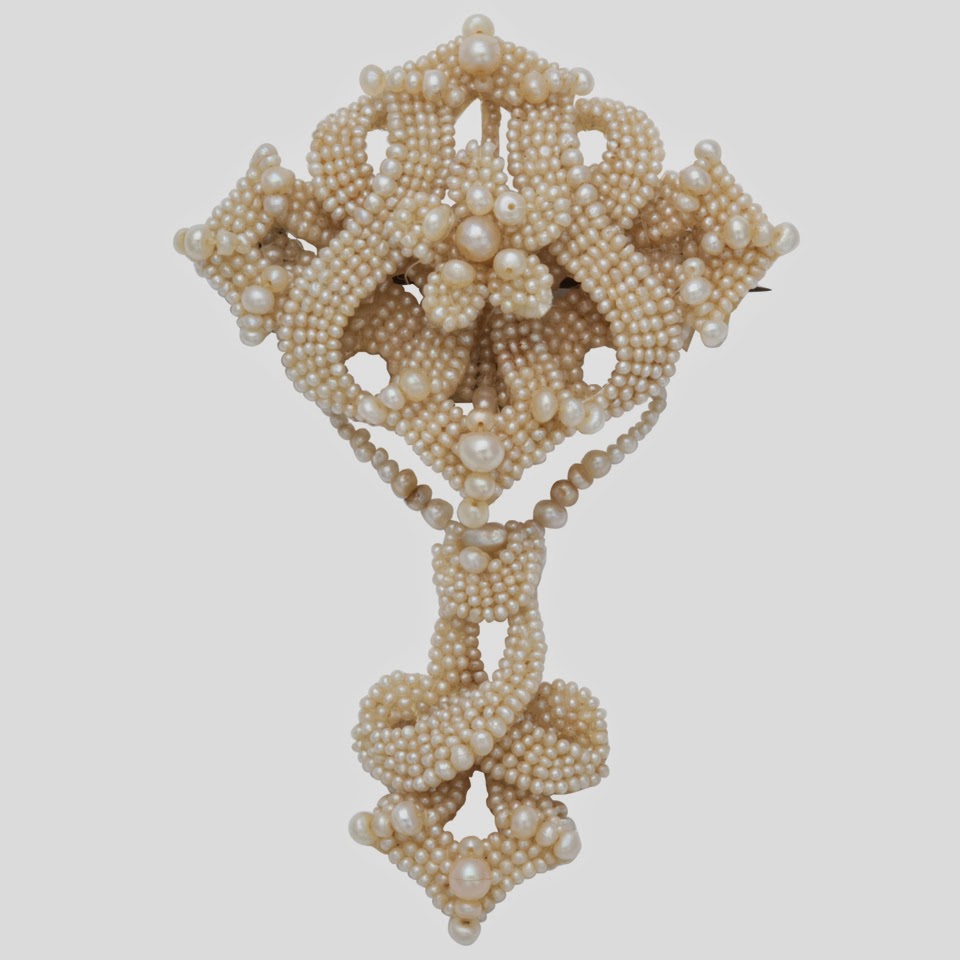 I post this detail from a painting by Albrecht Durer to give you a peek at the fineness of the construction on that shirt.  Just take a good look at the perfectly handled smocking at the neckline. That was most likely a very fine cotton batiste, or a similar lightweight weave. Such smocking would have been done with several parallel rows of stitches. In this case 6 to 8 rows of stitching would have been done to create those ideally rendered tucks. One of the reasons such a level of work was done on shirts was that they were not only the undergarment for daily wear, they were most often used for sleepwear as well. So a shirt would get constant hard wear. 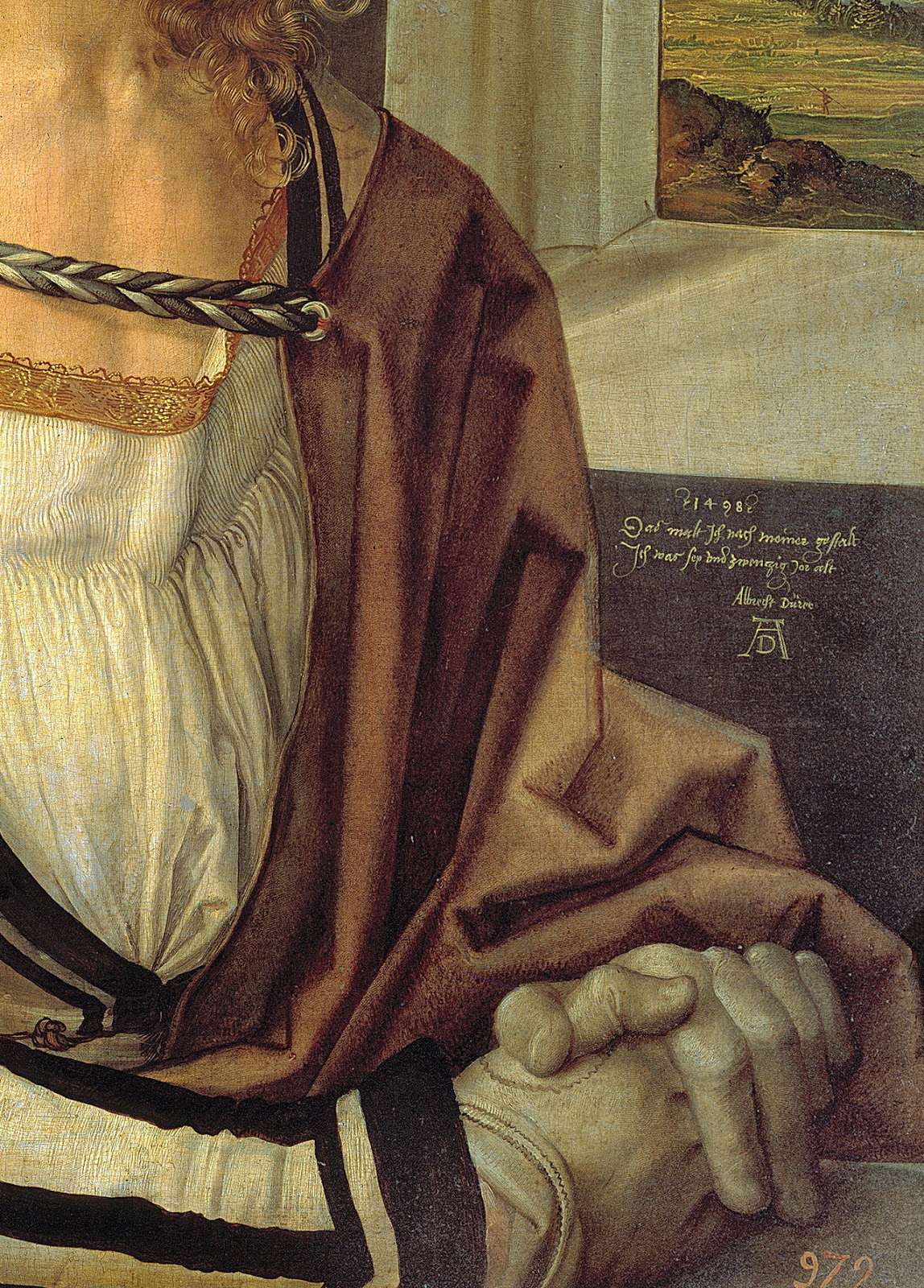 Bringing up the rear, as usual is another wonderful creation from Charles Frederick Worth.  This walking/Visiting costume is from 1889 and is made up in two shades of one of the house materials at Worth, a cotton plush with a pattern of raised dots. Since the textile is (for Worth) pretty restrained he ladled on a few extravagant details.  The black silk bows and sash are wonderfully dramatic punctuations to a sedate design.  And the lush machine lace jabot gives it a luxurious air that is in keeping with the House's traditions.  Madam must have felt magisterial in this. 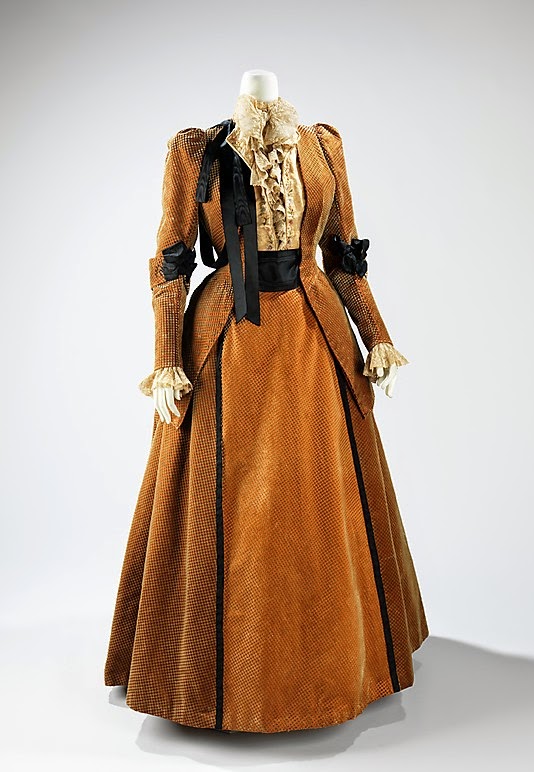 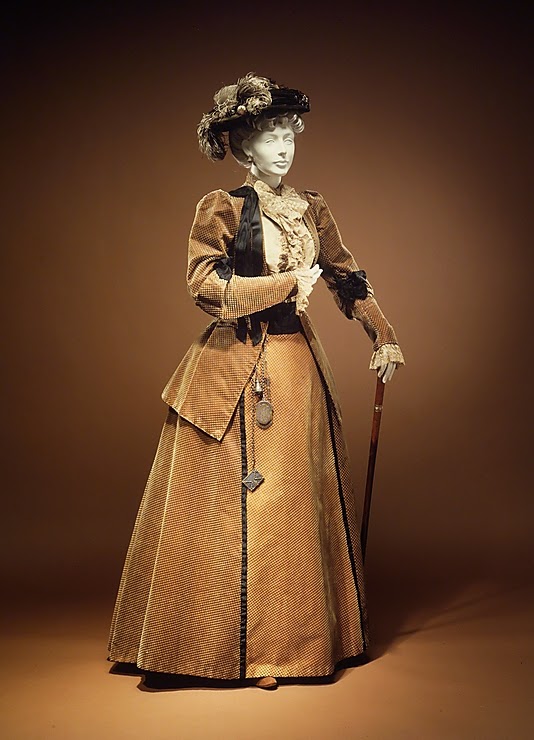