Girls and Boys, its time for our weekly dose of random stuff.
I want to start out with this intense image of Elizabeth Taylor from Cleopatra.  Its of interest to me for how Hollywood twists our perceptions of history, by making the realities of it conform to our hopeful wishes of it, and whatever our current cultural norms are.  In this case, though there are some references to the period and place in her attire, she is mostly a resolutely 1960's woman.  Really the part of her apparel that gets closest to accuracy is the arm band, but even that is subtly tweaked to conform to the needs of cinema, and the 60s.  Her dress is by style, fabric and construction, wrong in every respect, her wig, gives a nod to the culture, but doesn't go all the way, and though her make up references, in particular the bust of Nefertiti, it really owes more to the Mods of London than the Upper Kingdom. Second on my list of delights is this beautifully etched and formed cuirass.  Made of steel, with brass joining studs, it is not only wonderfully well crafted, but I am also intrigued by the dissonance of having an iconic image of maternal love and support emblazoned on the front of something dedicated to violence and warcraft.  In our Attire language we frequently use contradictory terms. This is a perfect example. 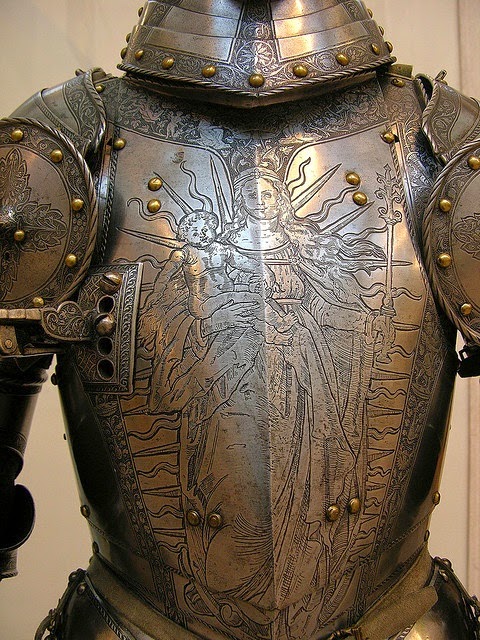 Before our culture became globalized, every nation, and frequently areas of nations, had versions of the common mode that distinguished them from each other to a degree. This Robe a la Francais from 1765 is of English make.  The clearest, easiest way to identify it as such is that the English eschewed a great deal of the extra embellishments that were commonplace in both France and Italy at the time. Where the robings would appear, (at the edge of the gown that faces the stomacher and continuing down to the hem on either side of the center front opening), is in this case entirely devoid of trimmings.  The dominant decorative detail is the stomacher itself, which is restrained as well, having no embellishments on the brocade fabric in use. 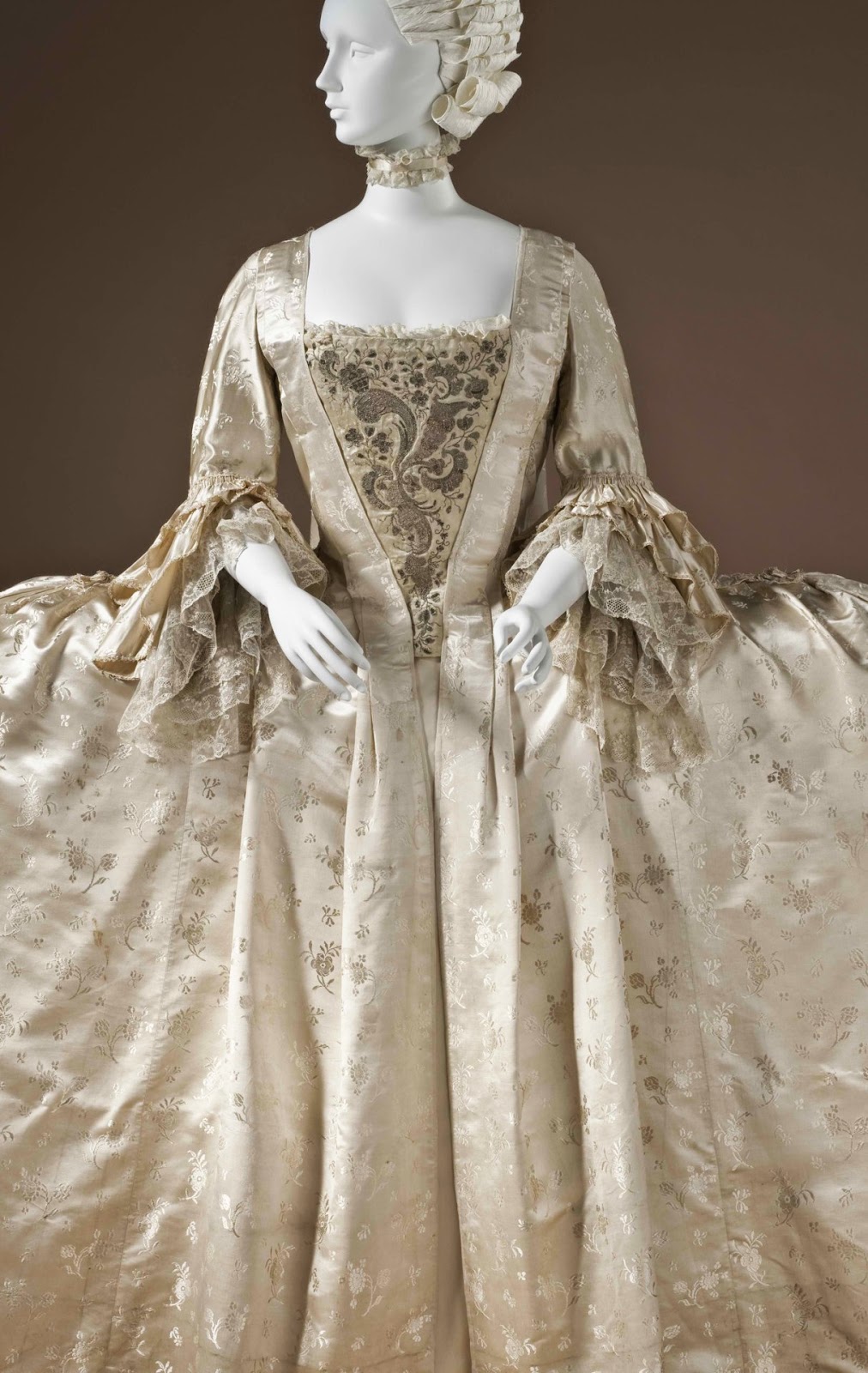 This picture is an advert from Zink and Sons Tailors in Sydney, Australia.  I'm mentioning it here because it shows an interesting shift in how menswear is marketed, and how male models are staged to interact. In particular the intent gaze of the fellow being fitted for his jacket is a change from the utterly disconnected way that menswear was presented in advertizing prior to the 21st century.  Is that anger, frustration, jealousy or desire in his eye?  We cannot know, but the point is there is a real relationship suggested here, rather than a random positioning of men without and relevance to each other.  What it suggests moreover is a shift in how we socially perceive men, and how they relate together. 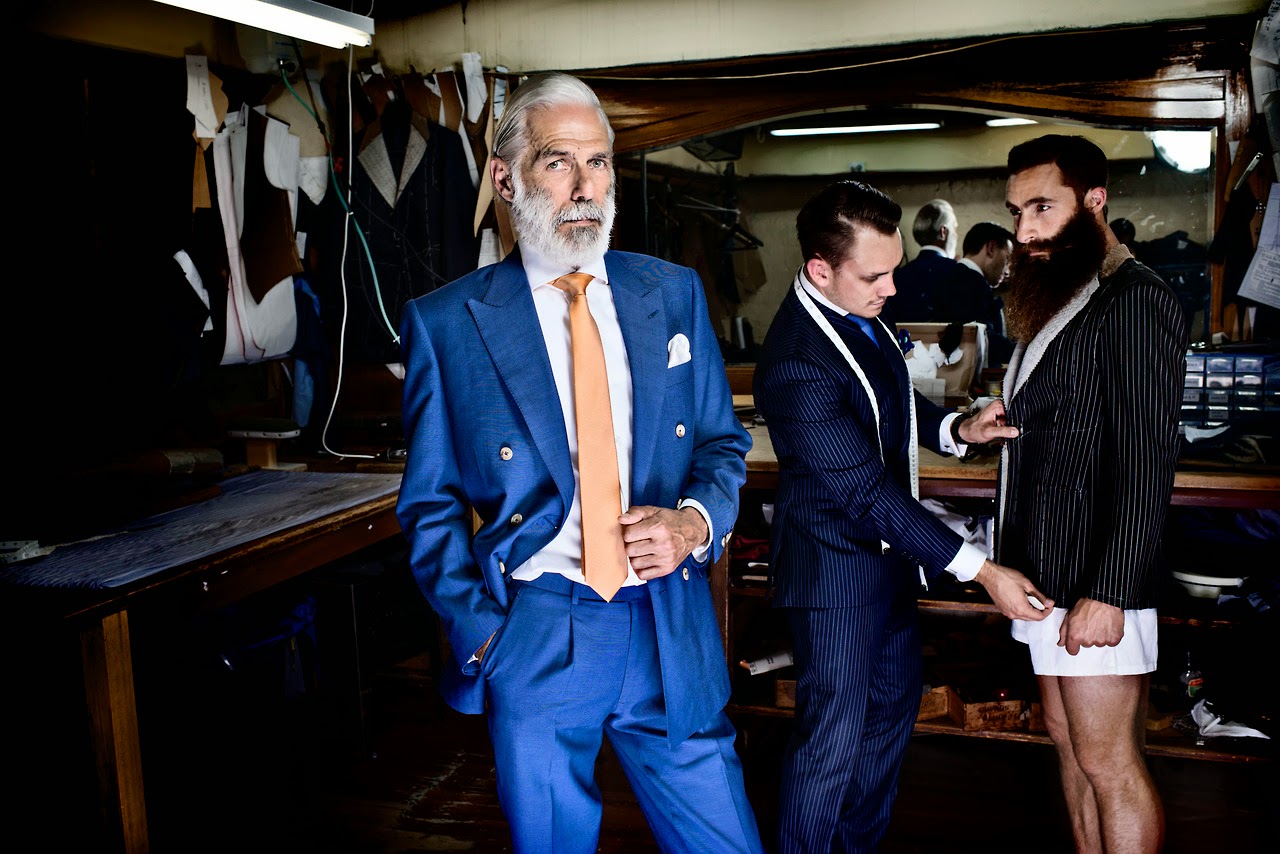 When I first found this image it made me smile.  Once upon a time, ( in this case, the 1930s) when we were on vacation somewhere, like say, Monte Carlo, the expectation was that we would dress for it.  Leaving one's hotel as though dressed to play in a sand box was not possible. But then again, this was also a time when there was no such thing as carry on space, and travel meant steamer trunks and a full day of packing. So here are these two decked out ladies, toasting just how fabulous they both are. 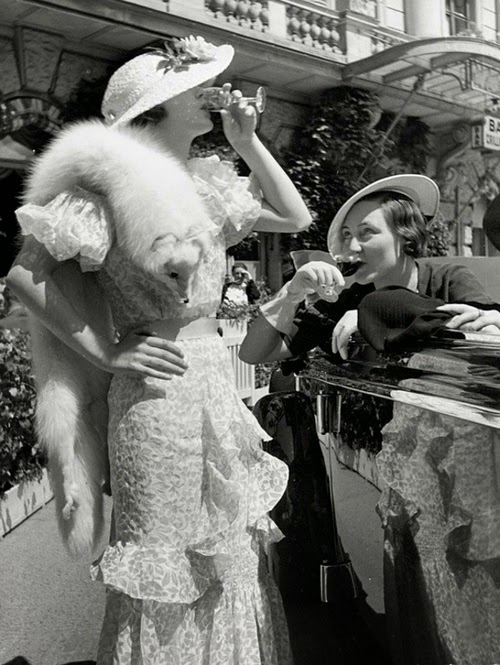 By now you know how much I appreciate anyone who bends the rules and blurs the lines.  This shot got my attention instantly.  Part of me wishes deeply that we could get away with a much greater level of playfulness in our daily dose of attire.  This fellow, with his curious combination of coyness and sly menace might be just teasing us, but there might be something darker going on.  His apparel is so full of cues and hints that we cannot make any of it out with clarity, which is of course, the point in this case.  All the pastel softness is both supported by and undercut in another way by the essential decadence of his wildly abundant ensemble.  It makes me want to know more. 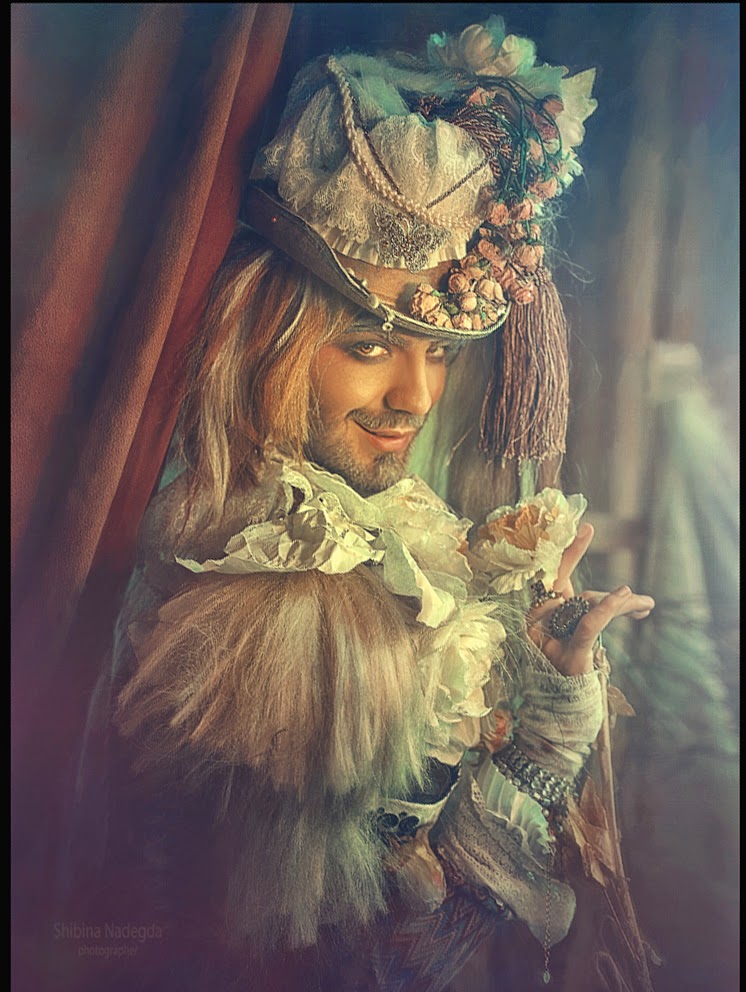 Because no scatter post would be complete for me without a visit to Mr Worth's atelier , I'm including this drool worthy evening jacket from 1890.  The coat draws its shape from the gentlemen's coats of the 18th century. It is of deep burgundy silk double pile velvet, embroidered with cut steel and jet beads, and further decorated with beige Point de Venise lace, and a black silk ribbon tie for the waist.  Pardon me while I get a tissue,... 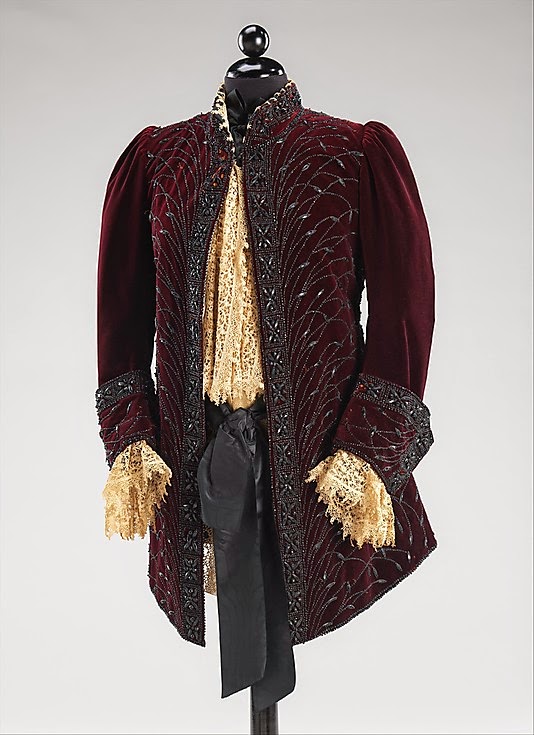 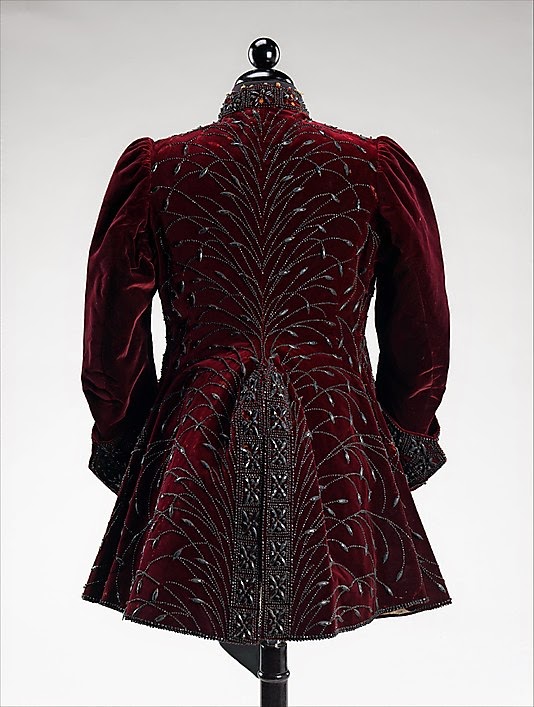 And bringing up the rear, this wonderfully disturbing costume from the French company Vertugodins.  Certainly in the US we have gotten used to masquerade costumes being pretty uniformly cheap and tacky in their make and design.  Not for these folks. This costume, called, Post Apocalyptique even has a custom designed breathing mask.  Good, unique design is out there.  Of course, its not going to be a 20 dollar costume.  But I always appreciate anyone who gets the details right.  This is an awesome costume.