There are certain periods in time which act as bridges between one defining era, and another.  The period of about 1910 to 1918 is just such a period, as it forms the join between the end of the Victorian/Edwardian period, and the modern age as it expressed itself in the 1920s.  In regards to Attire's language it is the point where the formality and complexity of the previous era begins to give way to the open modernity of the Jazz Age.  As such its an interesting time to look at sartorially.
Men's clothing would not go through very much obvious change for decades to come yet, but women's clothing would, and did.
The first and most obvious change was a narrowing of the silhouette. This time though, it was not by restricting the body to the hips in a corset, but by removing the many layers underneath, and raising the hemline to the top of the foot.  Corseting was not as crushingly tight, and with the raising of hems to above the floor, women had a level of freedom of movement that they hadn't had since the beginning of the previous century.  Also, both sleeves and collars were being made up in less restricting styles, so more freedom was gained up above, as well as below. 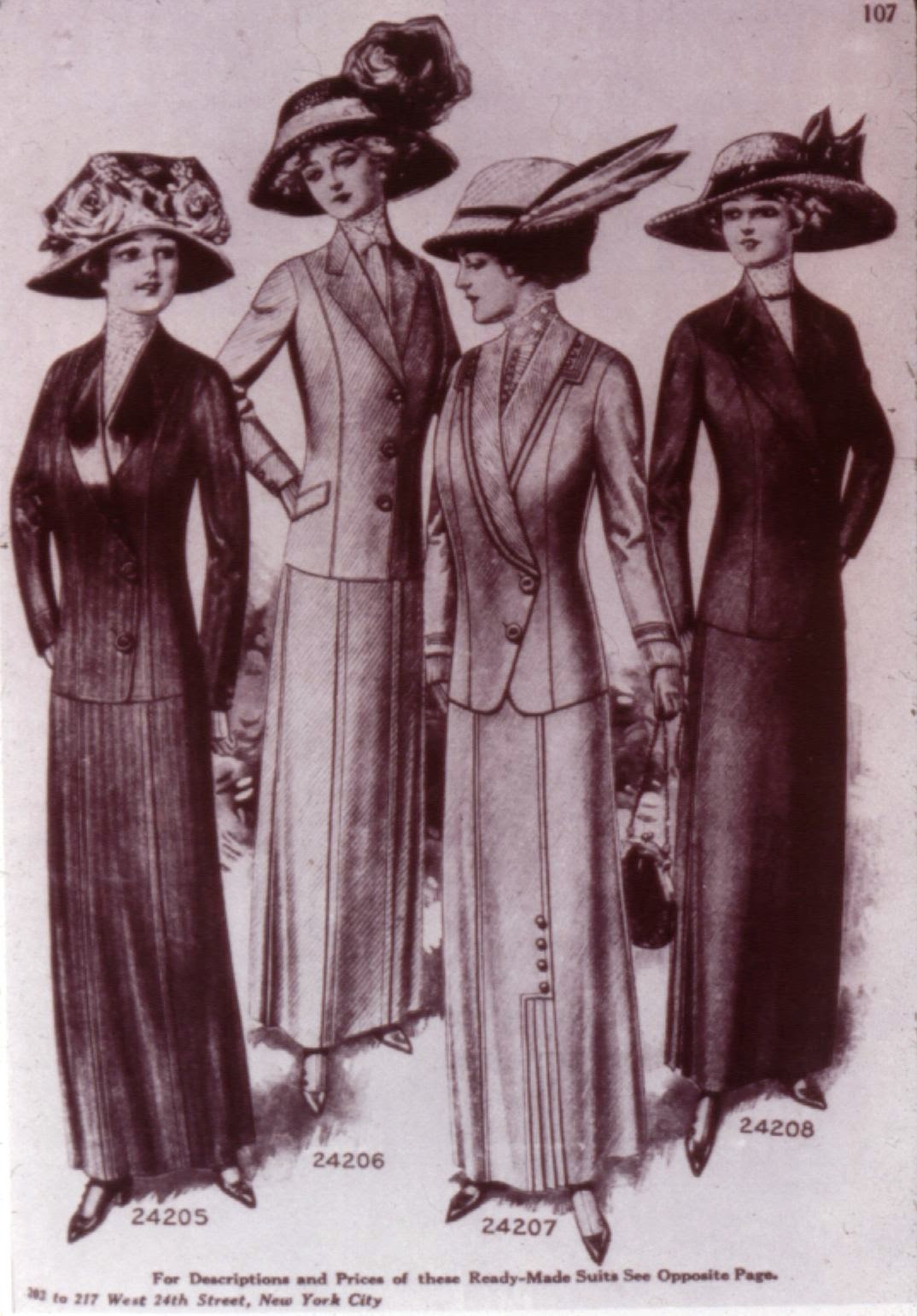 Though designer Paul Poiret, who was at his peak during this time credited himself with getting women out of their corsets, that is a spurious claim.  Most women still corseted to a degree, simply not as radically as they had before.  Plus, the newer corsets were not as rigid in structure, so even when laced, a lady could still sit, and move in comfort.  It is true, however that younger women began to abandon their corsets, since the prevailing mode allowed the right shape to be achieved if one was moderately trim.  Corsets also not only changed shape, but shifted position to a degree.  Where the shape had come to just under the point of the breast, the newer corset sat under the breast entirely so the corset rode lower, and the majority of the compression happened across the hipline, rather than at  the waist. 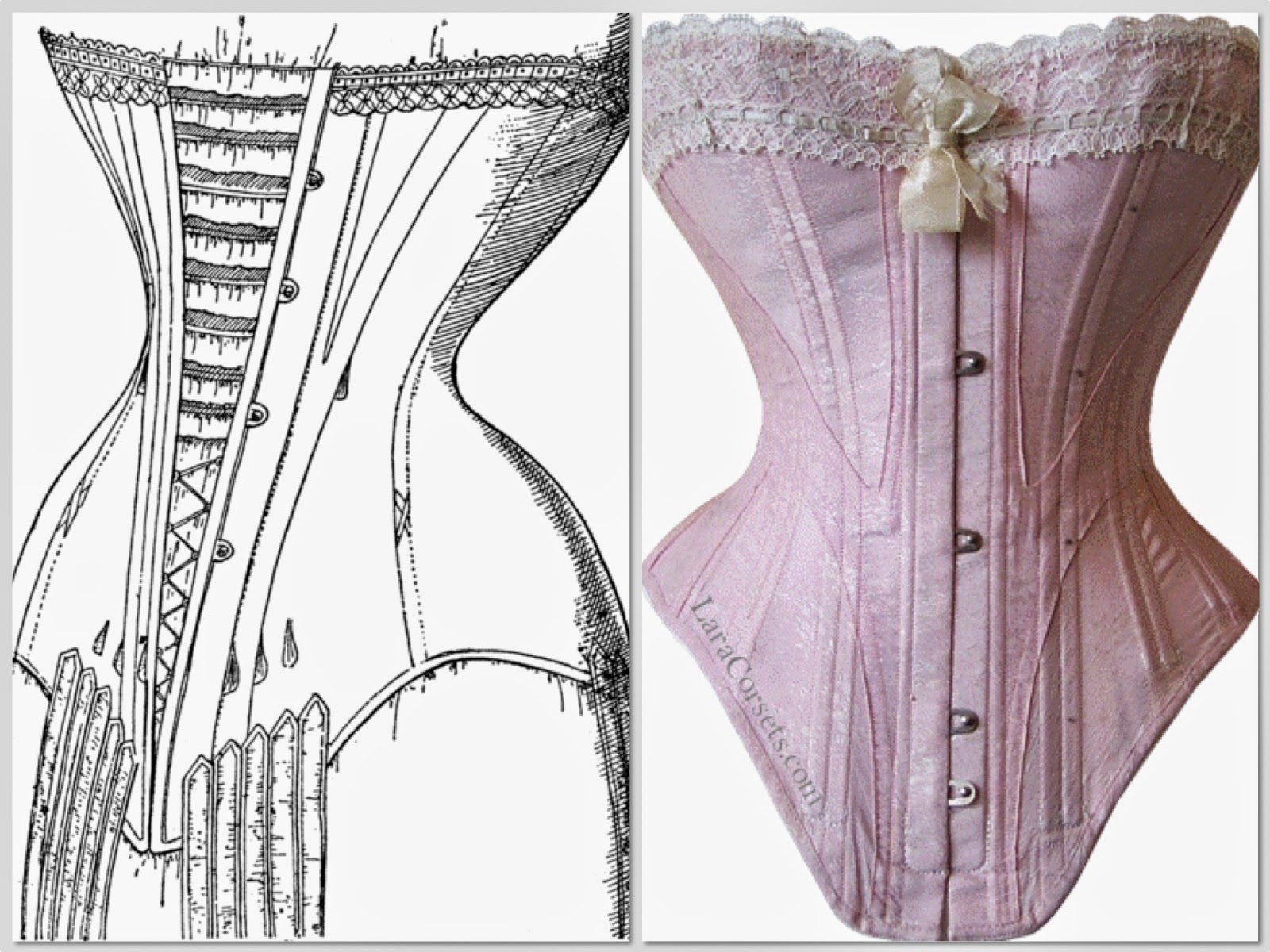 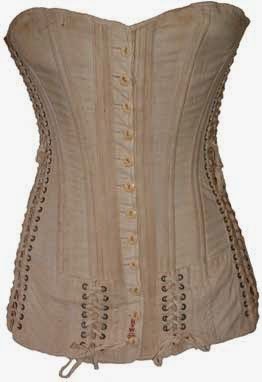 In addition to the relaxation of shape, there was a lessening of reliance on acres of embellishments; in particular the previous lavish use of silk flowers, even on day wear.  The newer mode was trim, devoid of much fussiness and allowed a woman to walk with ease. All of this happened very much in concordance with the rise of the women's suffrage movement, and the appearance of more and more women in the work force in an ever widening number of professions.  As women began to demand their place in the world outside the home, the Attire language responded with new words that suited what they had to say.  The leaner, more confident look of the day stated that a woman meant herself to be taken seriously. The First World War contributed to these changes too, as so many women stepped into jobs previously held by men. Of course, viewed with the lens of history, its clear those statements didn't yet have the power they would achieve in just a few more years, when women clipped their hair and raised their skirts to nearly the knee.   But these first efforts at expressing the new woman had power, nonetheless.

In the evening, a gown, which previously would have been overburdened with ornament, now became a lighter, airier construction, that even in formal spaces permitted greater freedom of movement.  Though all sorts of ornaments were still in use on evening wear, their use was more refined, less abundant, and more dramatic.  Often a gown would rely on a single defining detail to give it strength, where in the prior decades it had been about too much of everything. 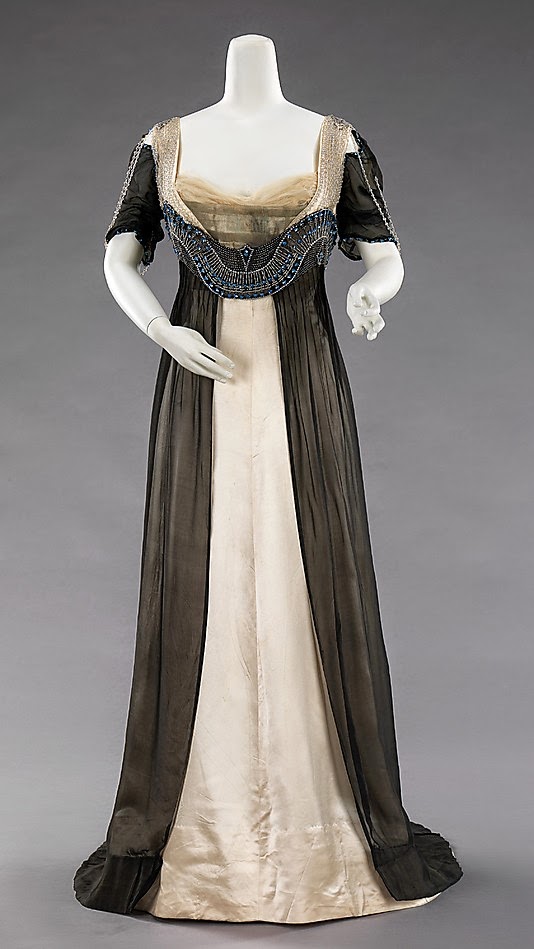 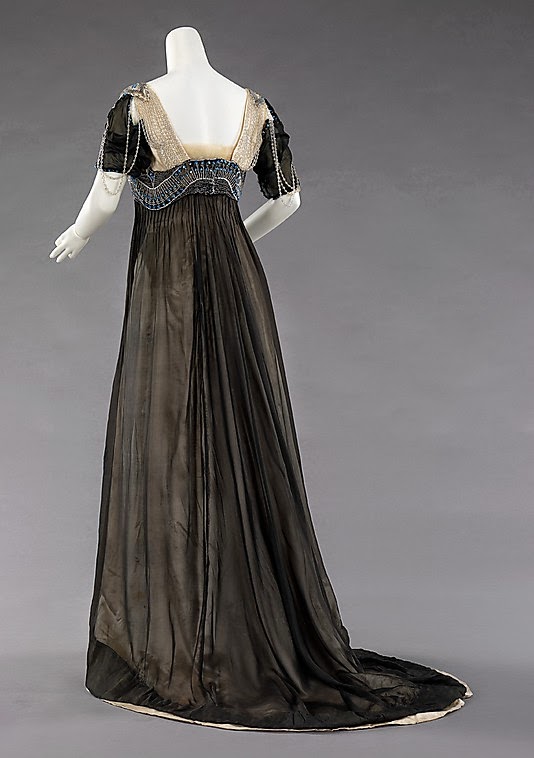 The one place where women's apparel was lavish in the extreme was headgear.  Hats for women were still vast edifices that counterbalanced the slim line of the body, turning a female into a walking full blown flower, with her body, the stem. 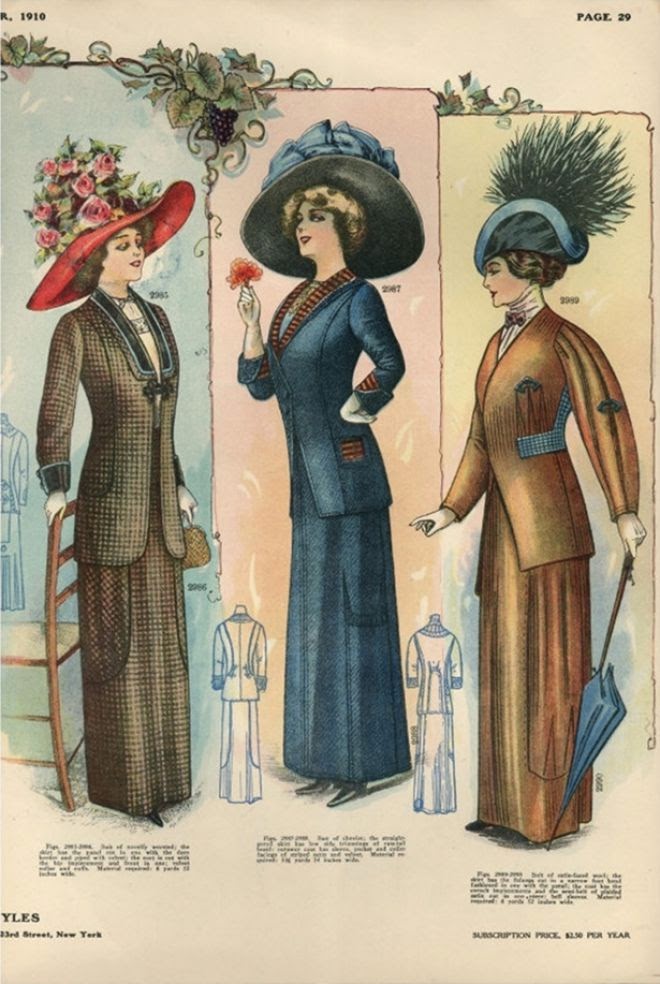 As the years proceeded closer to the 1920s, more and more breaks with the past occurred.   Bifurcated skirts made an appearance and hemlines continued to rise. Women began to openly wear make up, and smoking became an edgy if acceptable past time among the chic set.   But throughout this time, when looked at with a discerning eye, you can see that while we were dropping thoughts and styles behind us as outmoded with one hand, we were picking up new ones with the other.  And all of this allowed women in particular to walk more confidently in the roles they were taking on for themselves; so that when the new decade dawned, they were ready to vote in elections, dance the Charleston, and fill places in the world they had previously only dreamed of having.