Here we go down the garden path of random beauties and oddities I call Scatter.

First up today is this quietly sensual and timelessly lovely dress by Madame Gres, who was in her time considered the absolute master of this sort of goddess dressing.  Working mostly in solid color and almost always in silk crepe, as here, she created clothes that thoroughly transcend time, place and station.  This white crepe gown is a masterwork, particularly for those unusual gathered sleeves, which in someone else's hands might have been a failure. 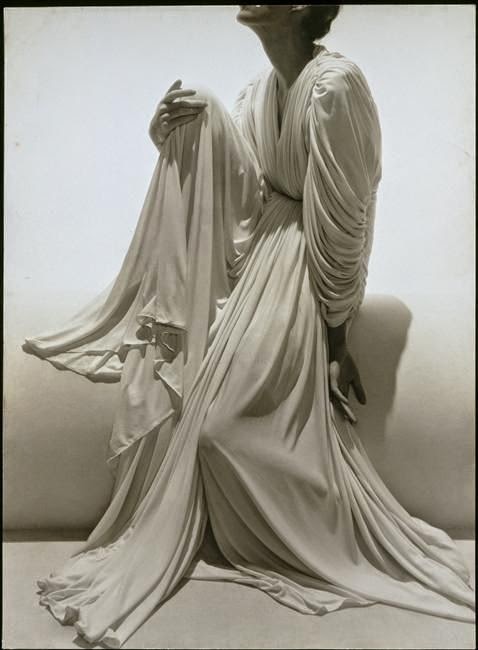 Next up, dancer Tony Ward as photographed by Ben Lamberty.  In this image Tony is wearing a ballet costume, clearly referencing the early Italian Renaissance. During that time, the sleeves were without question the most extravagant part of both men's and women's apparel, and in fact sleeves, which were separate pieces from the doublet, were sometimes given as gifts. These express the fashion for paned and slashed clothing that predominated for many years, and the volume of such sleeves added considerable swagger to a gentleman's appearance. 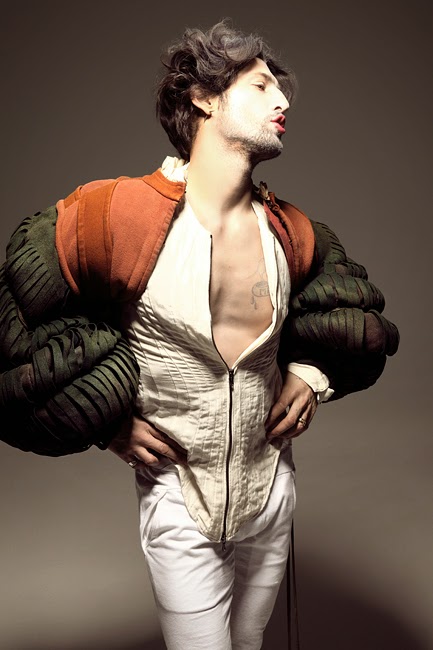 In the 1820s this English evening dress graced the rooms of some stately home in Britain.  The cream silk underdress is edged at the hem with a box pleated lace ruffle, headed with a trimming of gold tinsel embroidery. The silk gauze overdress is in its turn heavily decorated with more gold tinsel work, and the bodice trimmed out, like the skirt hem with lace ruffles at sleeves, and neckline.  Imagining this dress in motion, and in candlelight, makes me smile inside. 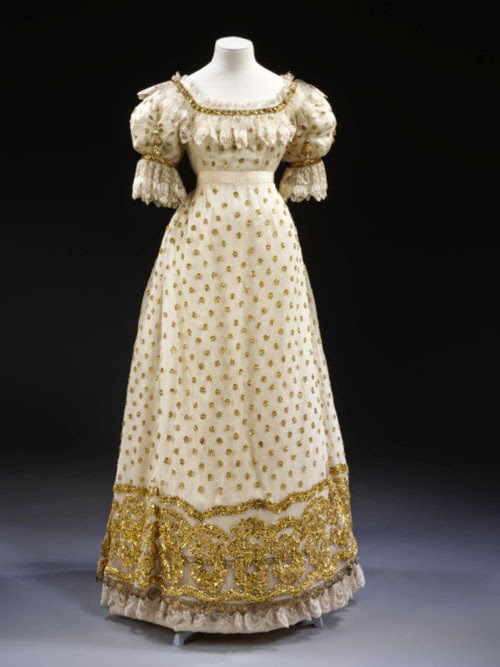 Say hello to Francois Verkerk as imaged in Apollo Novo magazine by Rock Armando.  Why post this sexy ginger fellow?  Well for me, its all about his hair in this case.  I haven't spent much time talking about hairstyles as part of the sartorial dialog, but they are a serious part of the language. But I find it intriguing that men's hairstyles, as boundaries seem to be fading a bit about sexual roles, are being allowed to express in more sculptural ways that previously would've been thought effete. And okay, I'm kinda in love with that jacket, and suddenly, I want a walking stick with a dog head. 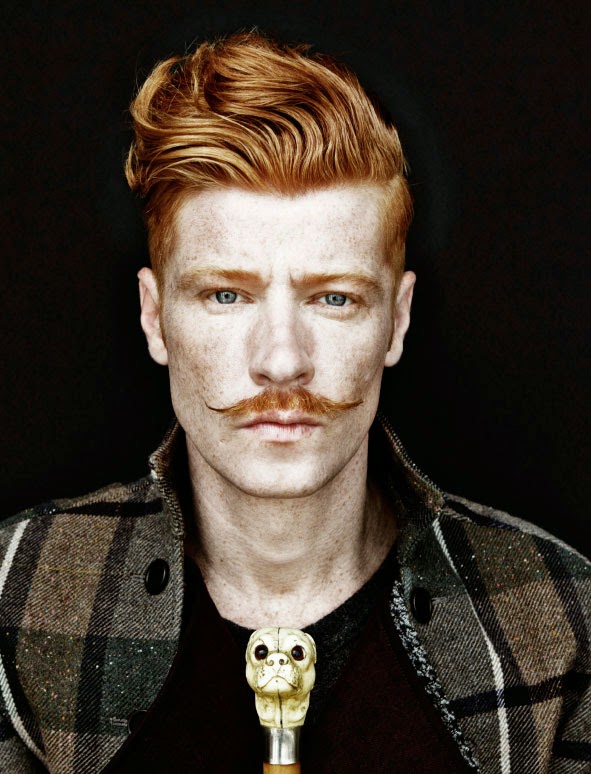 Continuing with the hair discussion a bit longer, this Edwardian lady is showing us her do.  Now is that all her?  Heavens no. Such vast amounts of volume were created by padding over which the natural hair was brushed, or by wiglets and falls.  And visually, it was part of the overall silhouette balance that a ladies head would be large proportionally to balance the volume at the skirt hem.  And then there are these amazing combs which were an essential part of keeping a lady's huge hair in place. They were an art form of themselves. 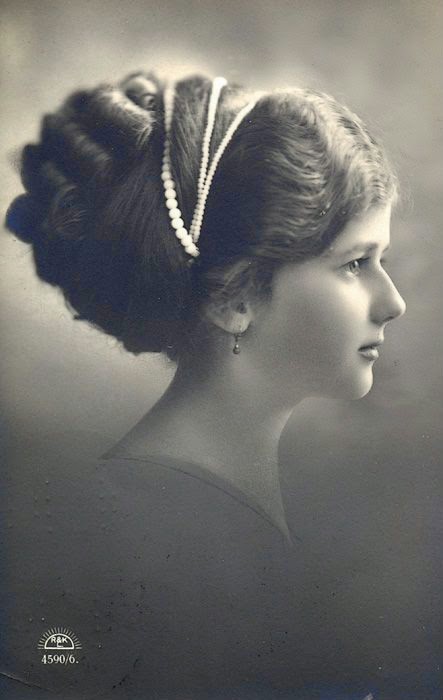 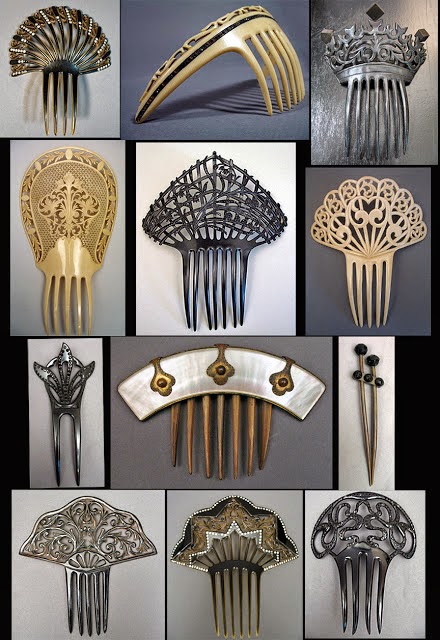 Studded leather has significant connotations when we hear those words spoken or see them printed. We get instant images in our heads of what that might look like.  We would be unlikely to envision this though.  I like this for two reasons. One; it breaks that stereotype about studded leather and takes it somewhere else both visually and contextually.  Two: I love that the designer took the notion of a western wear shirt, and using the very snap studs that go into making such shirts covered the entire surface with them, making something entirely new. 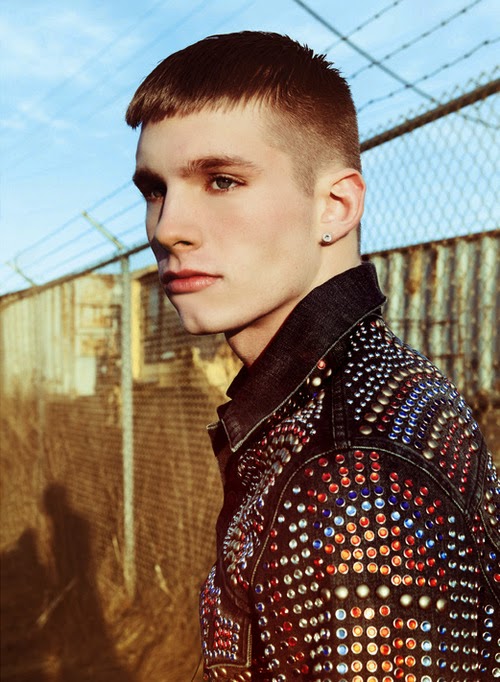 Oh, Cristobal Balenciaga, you do make me smile.  This evening ensemble is from near the end of Balenciaga's career coming as it does from 1963. The dress is a serene cone shape of ice blue silk taffeta, entirely without ornamentation.  The capelet in black beadwork and large scale paillettes creates a dramatic counterpoint, and draws the eye instantly upward, towards the face. Simplicity, perfectly rendered. 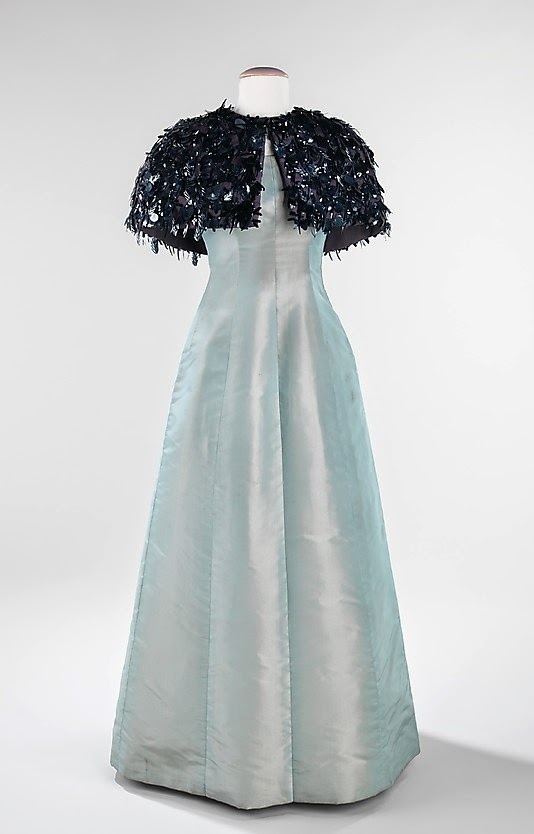 Last for today is this remarkable lapel watch in gold, with black enamel and rose cut diamonds.  The watch face is on the bottom of the ball.  When I found this image it was erroneously listed as being Art Nouveau, but it contains none of the fluid naturalism of that design school.  Also, its from 1880.  It looks resolutely Victorian to me.  Whatever its true style, and its really an amalgam, its a unique and lovely accessory, from a time when great consideration was given to such things.

More scattered stuff next week!
Posted by Paul G. Ellis at 6:47 AM