Its Saturday, children, and time for another dose of all-over-the-place-ness I call Scatter.
First in line today is this rather ridiculously elaborate peignoir set from 1904.  Its of French make and is an admirable example of the level of care brought to bear on delicate, fragile textiles, to make them into such frothy nonsense.  Sure, It is undeniably lovely to look at and nearly a tour de force of the dressmaker's art, but really?  Sleeping in this?  Really? it must have taken the ladies maid hours to iron this, just so it could be a rumpled mess by morning. 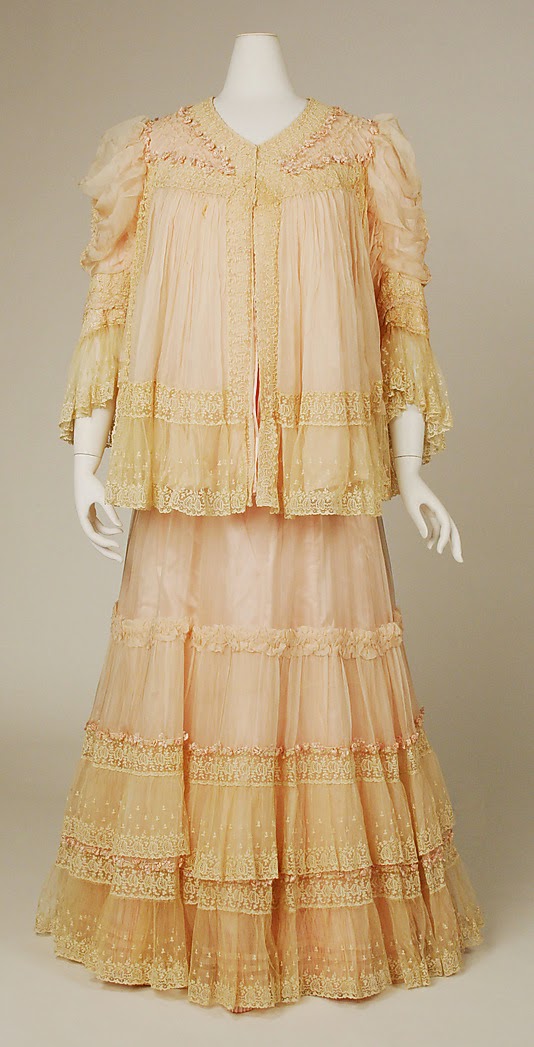 This stud is Clayton Pyle, modeling for Manner magazine. I'm really loving the combination of jacket proportions and the wide belt along with the scarf.  I'm getting a strong sense of daring do.  Its definitely GUY clothes, but for a super stylish guy, naturally.  And even at 5'4" I could kill it in that jacket. 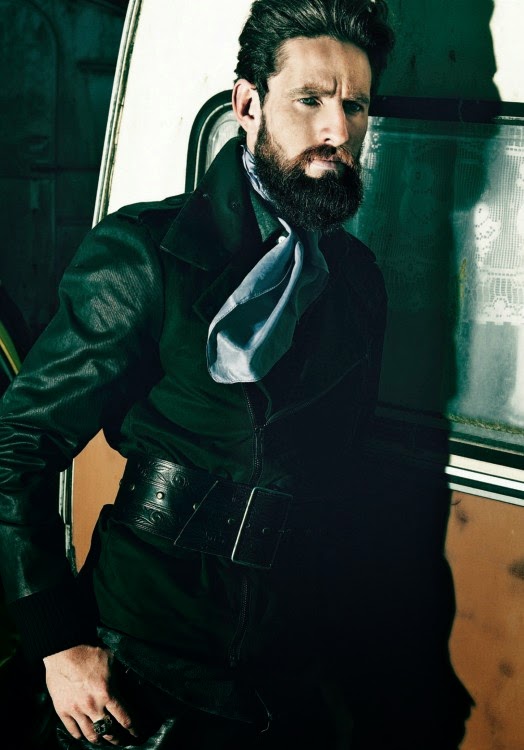 When the 60s dawned and the Youthquake occurred, being young, or appearing so, almost to a ludicrous extreme was all the thing of the moment.  This is model Penelope Tree, who was a major print model of the time, almost literally dolled up.  the make up and hair, combined with the size and proportion of the smock dress are joining to make her look even younger that she was at the time.  She becomes diminished, fragile and reminiscent of the paintings of Keane, who became famous for portraying bereft looking waifs with hyperthyroid eyes.  Its odd, is it not, that at a time when women were actually beginning to gain some ground in their struggle to be treated as equals, that this kind of look should be so enormously popular. 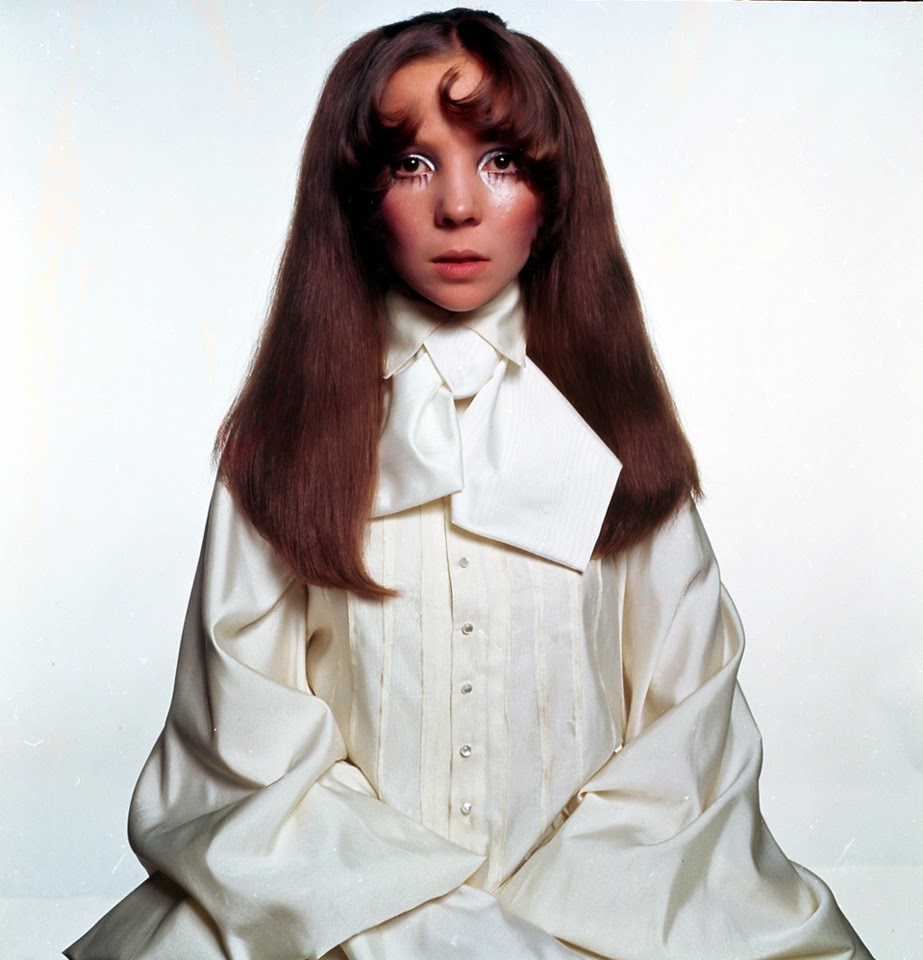 I will always champion the right of a maker of clothes to charge fabulous prices for a garment that truly justifies it in materials, design and execution.  There are however, limits.  This cable knit sweater, which could be done by a skilled knitter in a few hours, due to the size of the stitches and yarn costs, wait for it, 5400 dollars. Yep. There is, to my eye, not one single thing that justifies a four figure pricetag.  Even were the yarn hand spun from vicuna, it still wouldn't get me there.  Sometimes even I am baffled at the chutzpah of some designers and retailers. 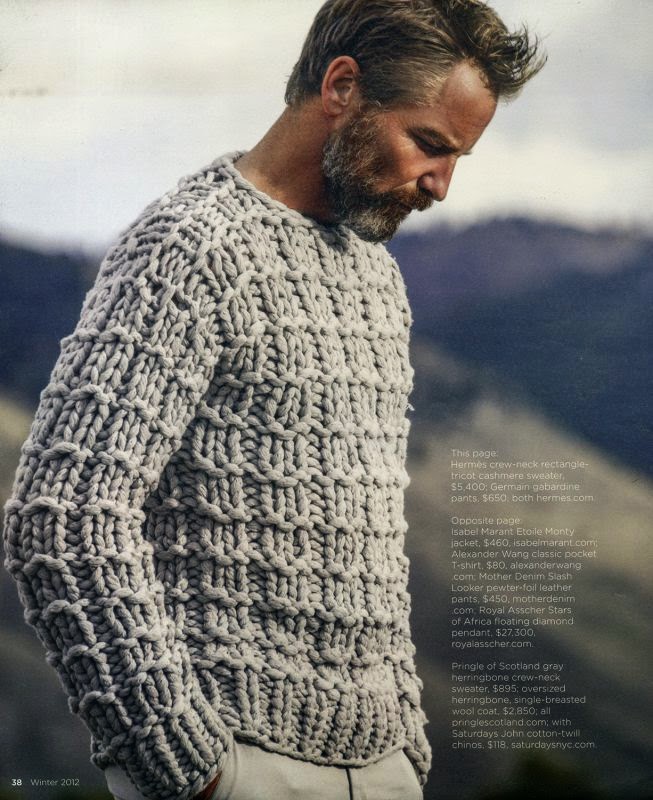 Wacky has its place in the Attire lexicon, just like anything else.  These two designs are never intended really to be worn in the real world, they are meant, possibly unintentionally, to be a visual joke and a satirical remark.  It is the business of any artform, applied or fine, to occasionally put one up us, when need arises.  Bravo to this designer for the moxie to do so. 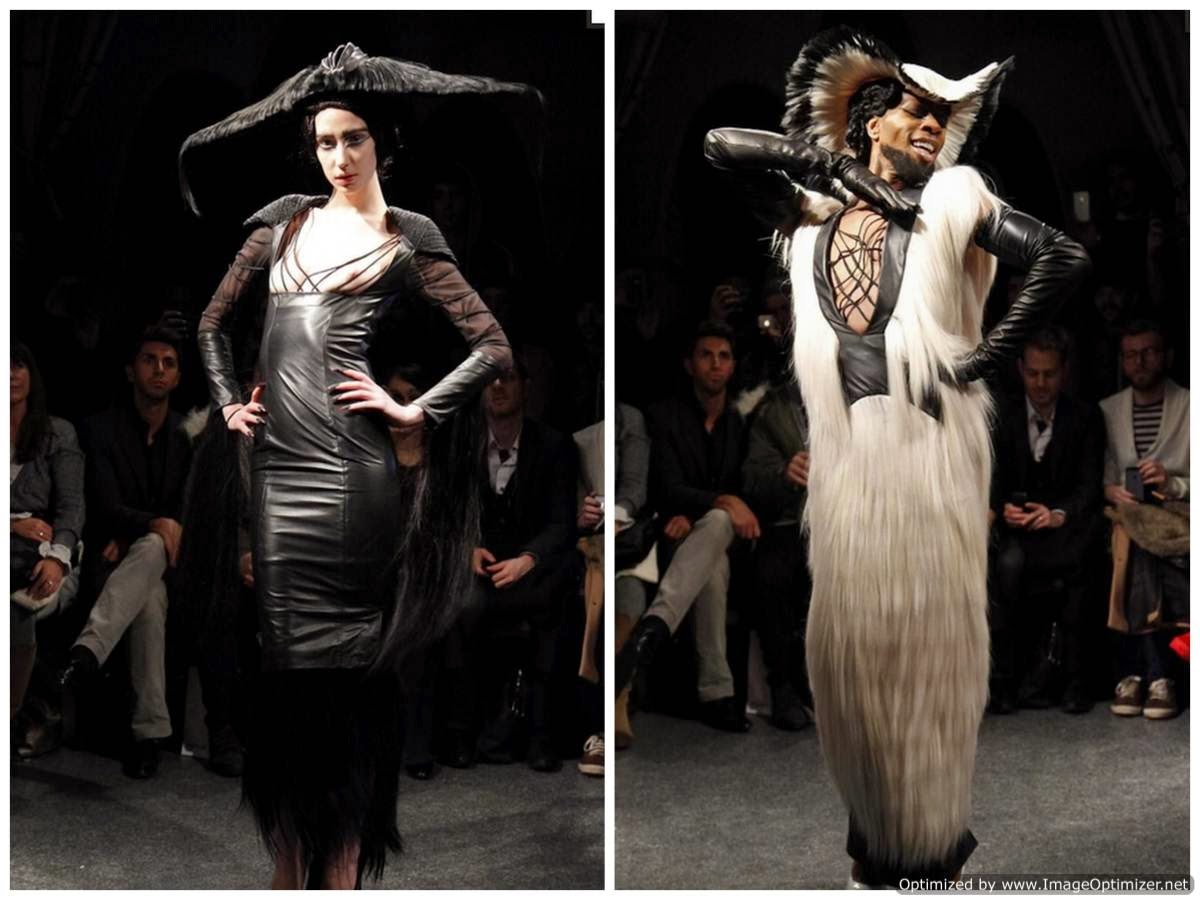 Here we have Marcelo Burlon modeling a design by County of Milan.  I love the unusual use of digitally printed fabric. The strange and interesting shape of that cape/jacket that its made from took me a moment or two to figure out.  I love the easiness and artful attitude here.  I wish more folk felt comfortable with crossing the line into wearable art territory, as this very nearly does. 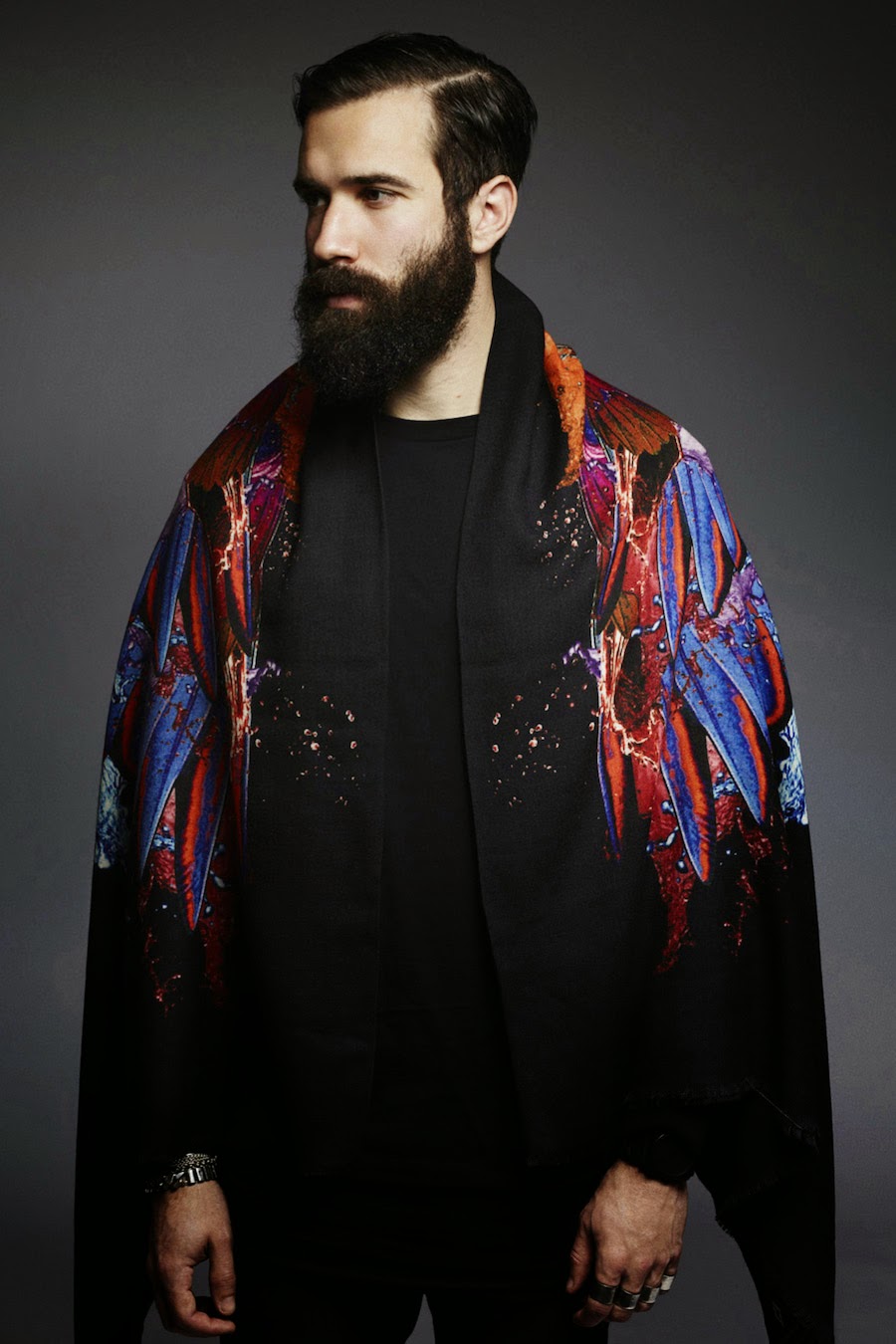 Speaking of craftsmanship, here's Mae West.  Somehow Ms West managed, with her intelligence and wit to make everyone agree that she was the epitome of the powerfully sexy and beautiful woman. She is a triumphant textbook example of taking whatever it is that you've got, and making it work for you.  Brava, Ms West, you done yourself right! 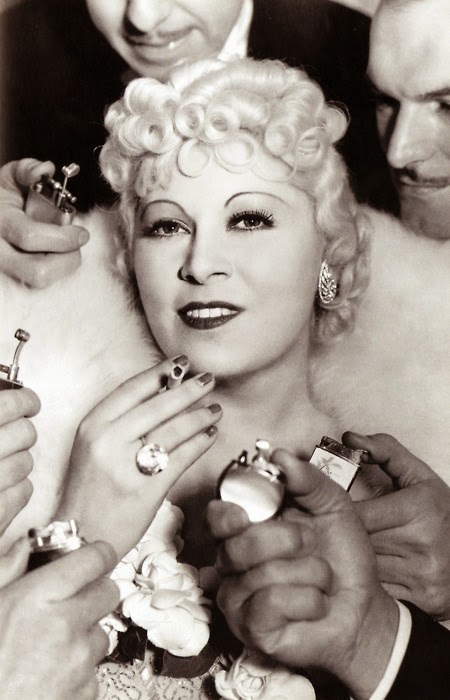 Of course, its Mr Worth bringing up the end of the trail.  This tea gown was made by the Worth house in 1905, and is a ridiculously luscious purple.  For those unaware, a tea gown was considered entirely appropriate for the lady of the house to receive her visitors in, even though its relaxed shape allowed milady to go without her corset, should she wish to.  This example has an under-gown of cream silk that is laid over with purple chiffon, and tied with a tasseled black satin sash belt.  The over-gown of silk velvet is embroidered in off white along the gown opening, cuffs, and the back of the neck.  I defy anyone to feel less that splendid in such a thing.  Wow. 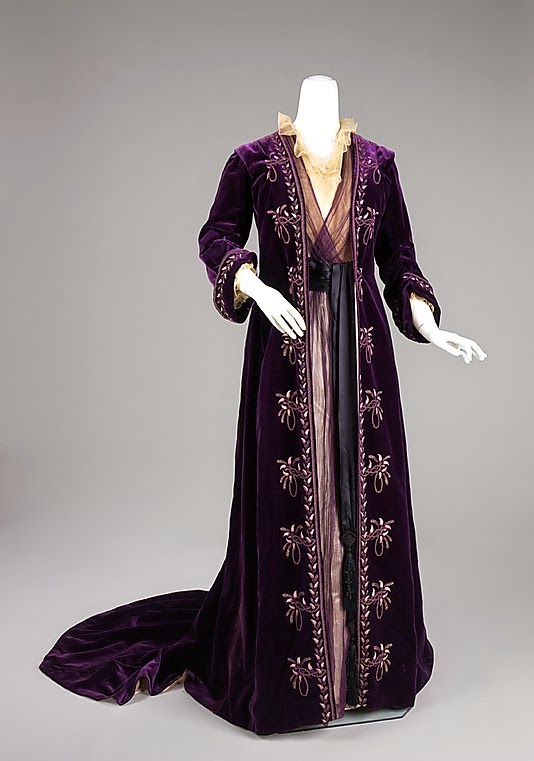 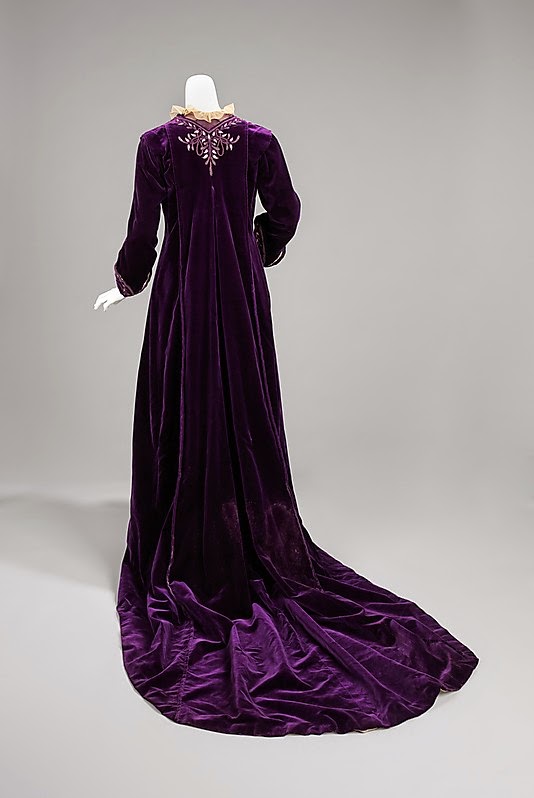 Well, that's all for this edition. Enjoy your Saturday all!  And see you soon.