You're getting a mid week Scatter because your fearless leader has to be at work much earlier than usual. So I'm going to give you some of the good stuff to keep you all going. (grin)

So, to start, this mannered portrait by Luis Alarez Catala' called "Woman Before a Mirror", painted in 1878.  I was interested by this image, because it shows so clearly the full collapse of the bustle and the rise of what was known as a cuirass bodice, where the torso was smoothly and tightly shaped from just under the arm to mid thigh. As well it shows nicely the predilection for mixing differing textiles in one garment, a notion which has only recently started to gain ground again after many years in eclipse.  This particular dress would have been thought suitable for  fairly formal receptions or dinners at home. 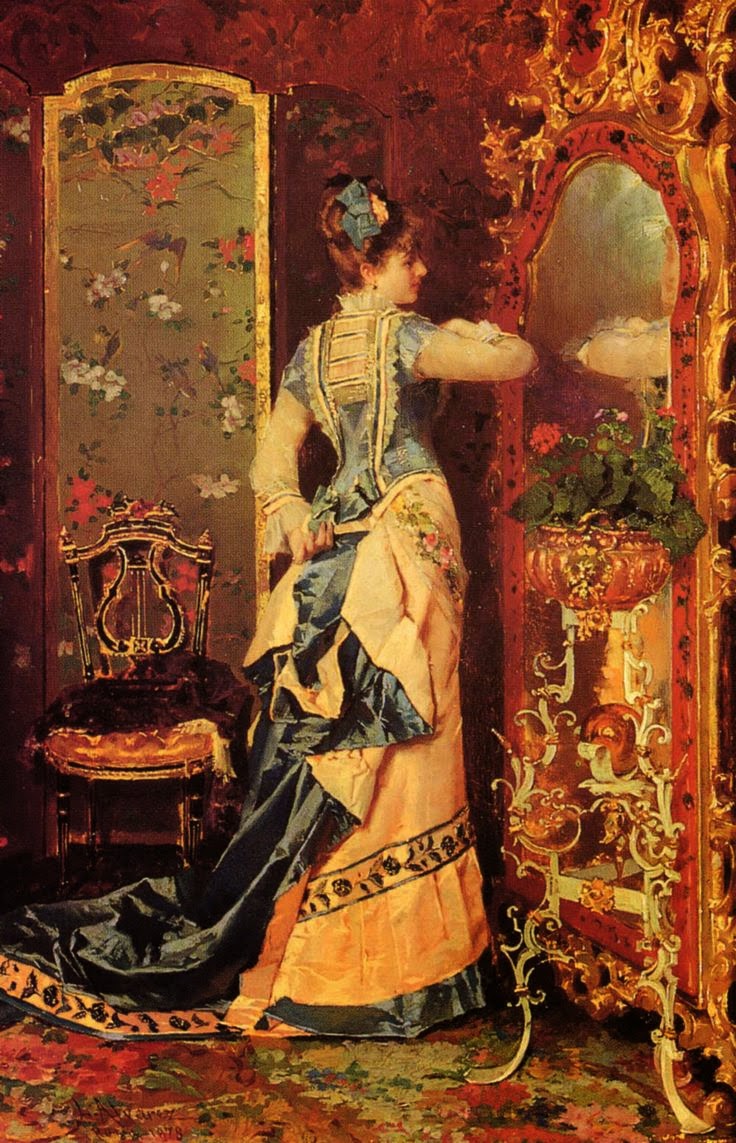 I love this man's look.  Its resolutely contemporary, but pulls from a few older sartorial notions to make it memorable.  The broad brimmed Borsalino hat is great, and I love that he used a formal white cotton pique' vest with his suit.  The only thing that bugs me is the dropped crotch on the pants, which I just object to on principle.  (grin)  Great style need not cost a fortune, but it does require thought.  We get a lot of clear messages about this fellow in one look from what he's wearing. 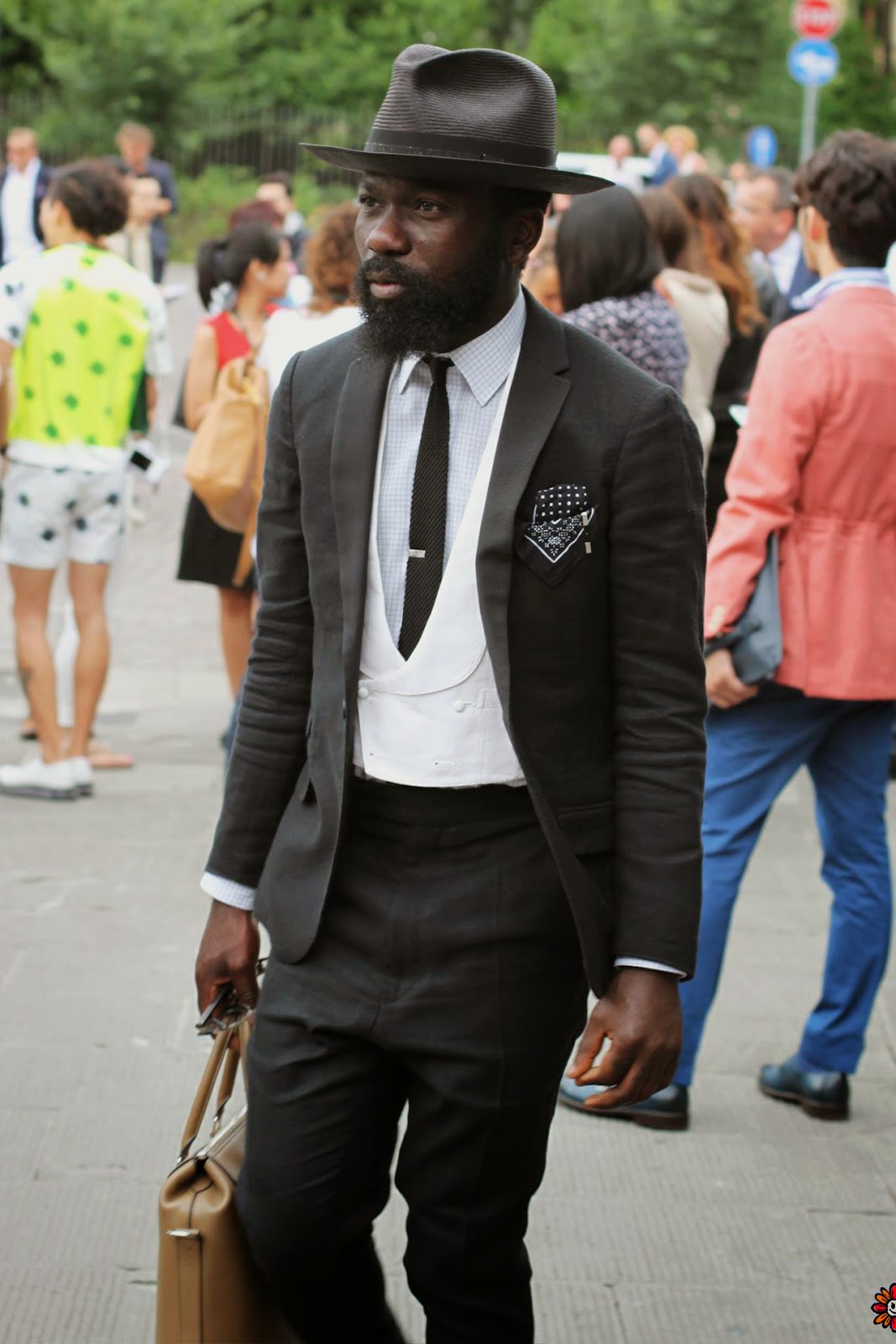 This is just a piece of straight up pretty.  No need for much discussion here.  This is actress Capucine wearing a gown by designer Pierre Clarence, and photographed by Georges Dambier in the 1950s.  Just sublime. 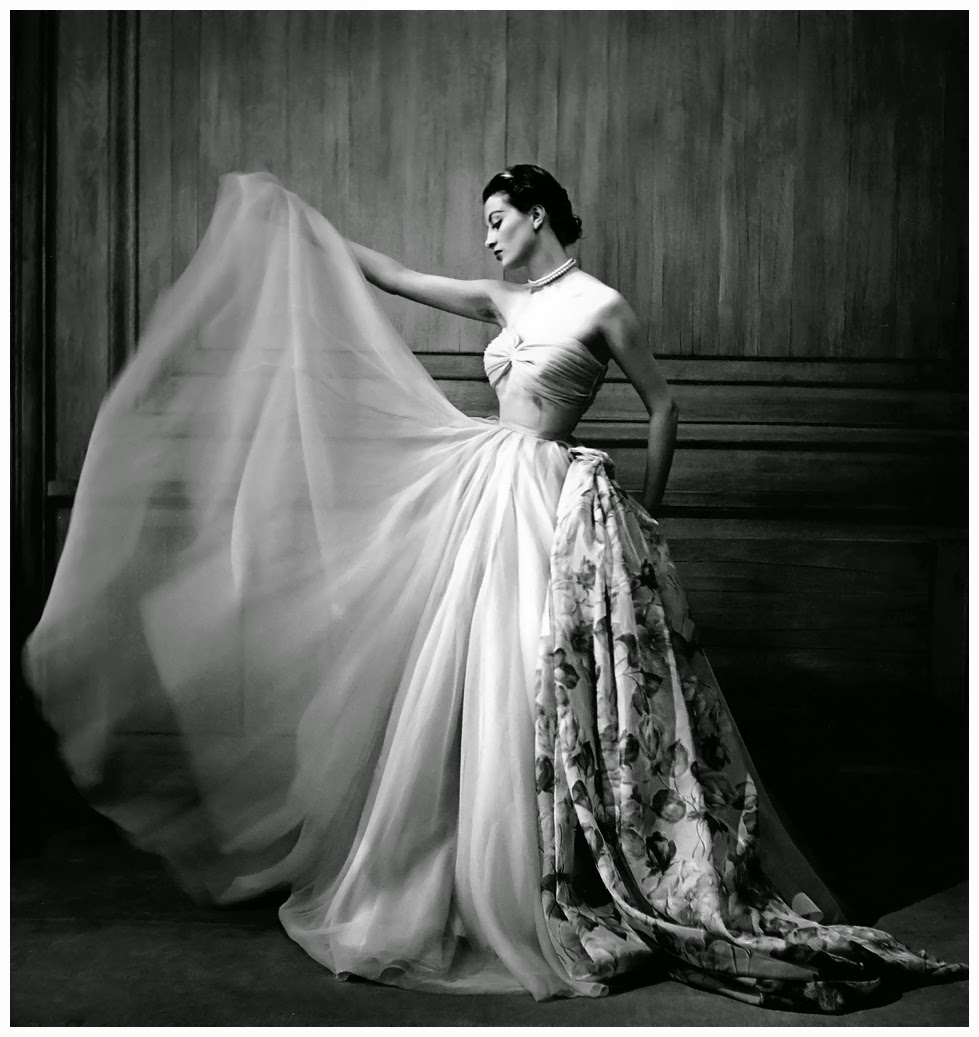 From the sublime we go to the utterly wackadoo.  I have had this image saved for a long while.  And I have repeatedly thought about posting it.  Clearly something about it is worthy or I wouldn't keep coming back to look again.  Whatever the designer is attempting here, beyond merely shocking us escapes me.  There is nothing here to take away besides the obvious fetish gear references with all the straps and buckles.  Of course, most disturbing is whatever it is that they have done to that poor model's mouth.  I understand and champion teh use of Attire to challenge and move us forward socially in many ways. I am at a loss as to what this contributes to a discussion.  Any thoughts? 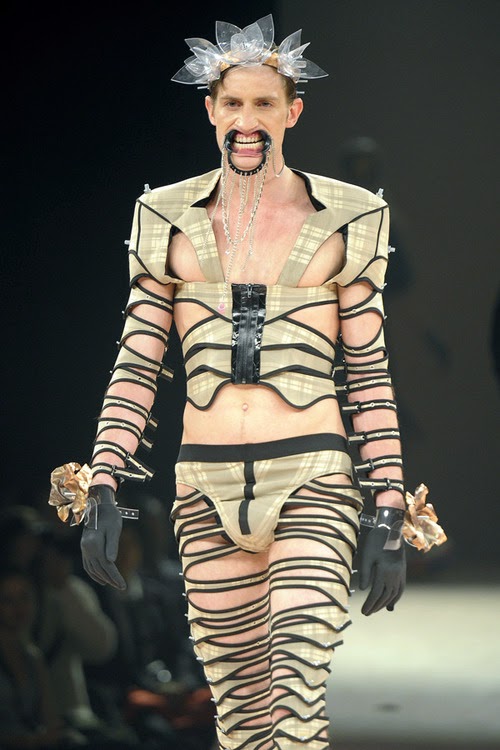 It has been a long held tradition in fashion houses that the final garment in the collection is a wedding dress, but over the years designers have strayed quite far from our widely held notions of what that looks like.  This wedding dress is from an Yves Saint Laurent collection in 1976.  The collections inspiration was the Baroque period, and this dress, made up in real gold lame', conforms very much in shape to the fashions of that time.  It was a look back, that looked forward as well.  I got to see this in person and the textile is as we say just now, "off the hook". 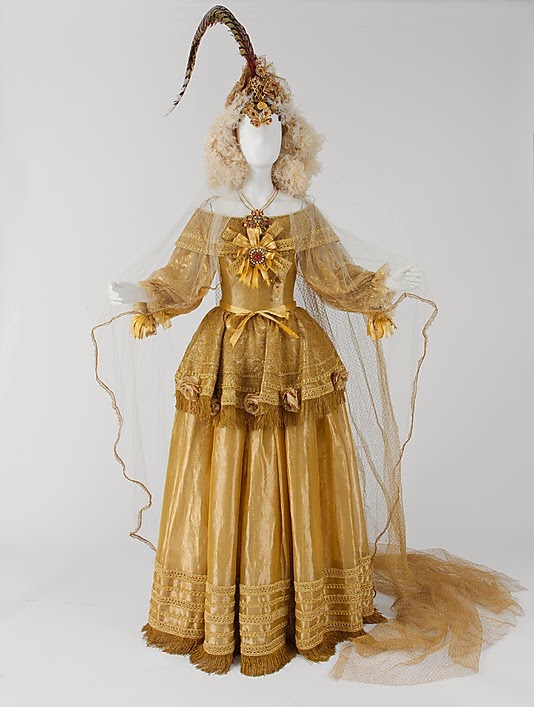 Menswear has had a long and fairly consistent love affair with anything that seems to fit into a military mode.  This look, with its references to early 20th century airmen, through the cap, the high belted jacket and the boot covers that suggest puttees is one that nearly transcends its time.  Though its a look from Belstaff that was designed this year, it could have come from nearly any time in the past century. We still equate manliness with heroics on the field of battle. Perhaps someday we will finally be able to divorce ourselves from that. 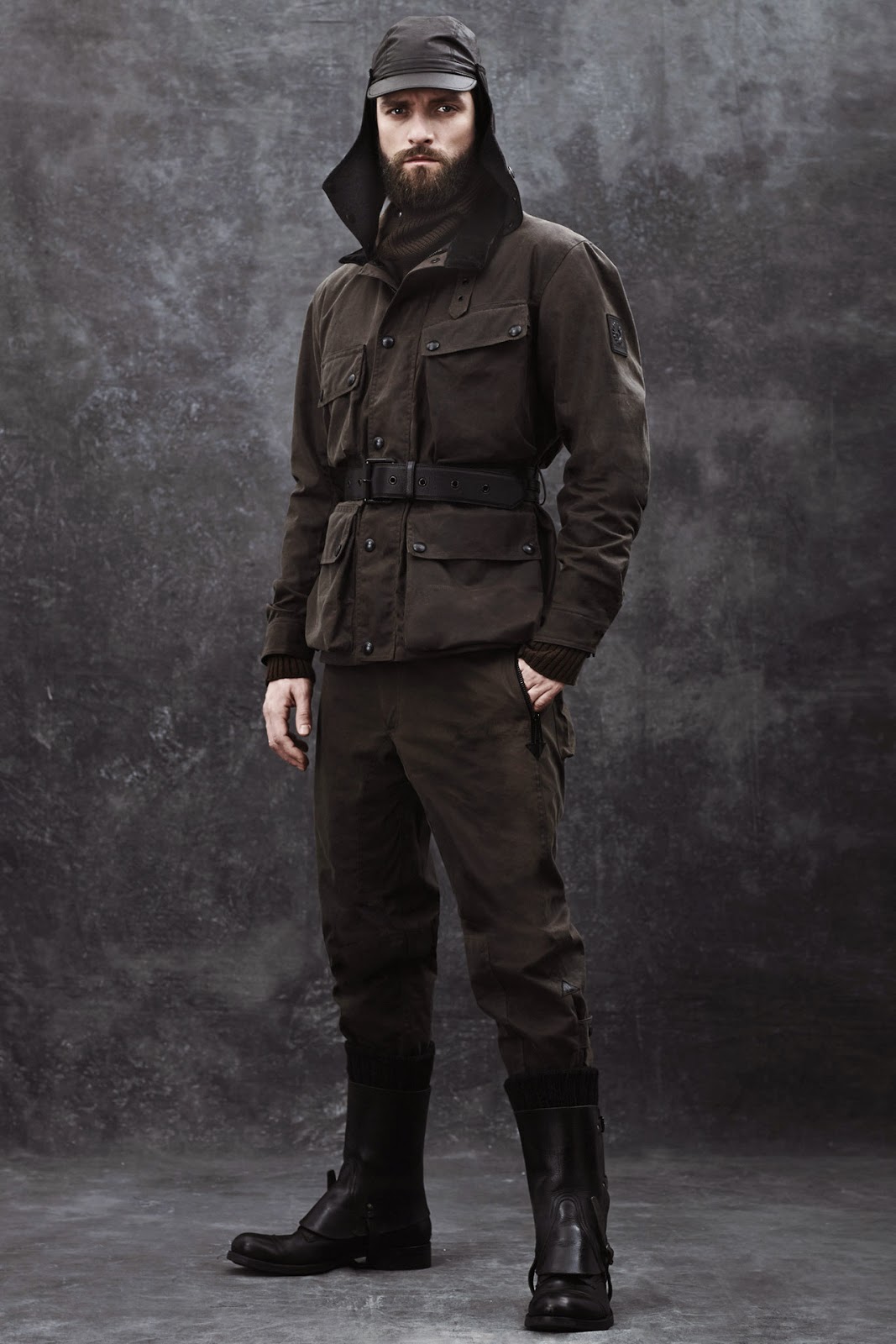 Gabrielle "Coco" Chanel as a young woman was a lovely lady, and one can clearly see why she was much pursued by handsome and wealthy men.  This portrait shows her already paring down the frills and decorations on her clothes, as her own style began to emerge.  This dress is, based on the fashions of the day, almost glaring in its simplicity. 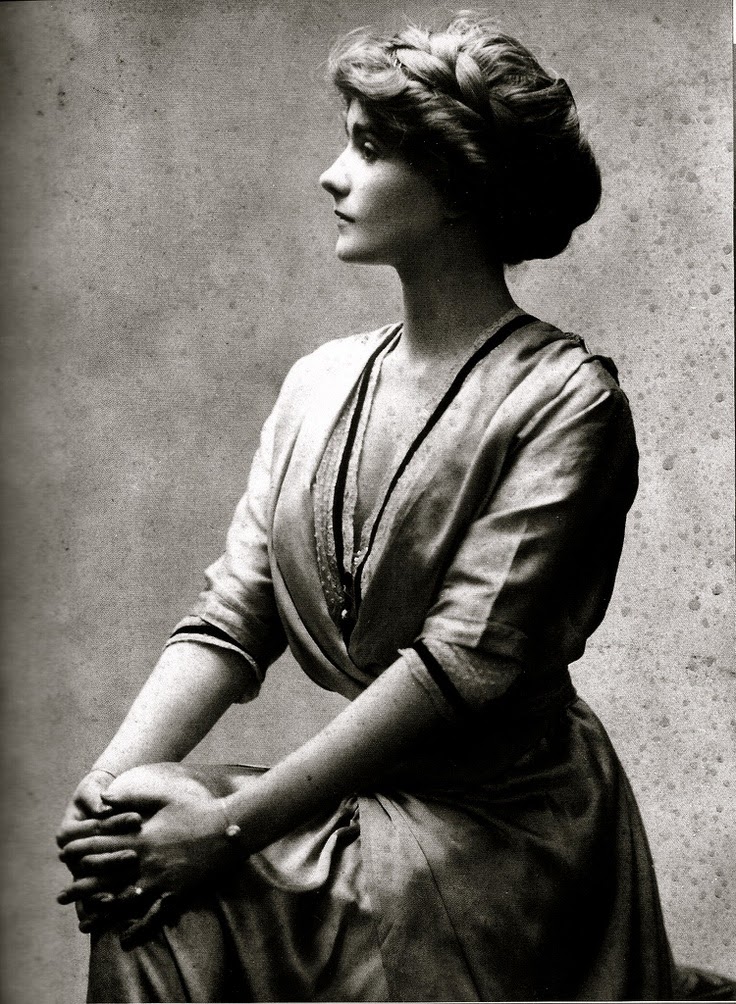 And as usual, bringing up the rear is something from Worth.  Cause, well, I want to, so there.
This dress is from very early in Worth's career. When he first started in 1857 he was partnered with Otto Gustave Bobergh, and this gown is from that period: 1861 to be precise. It may have been used as a wedding dress though its being all white is not enough to peg it so. It could just as easily have been a gown for a young woman who was out socially, but as yet, unmarried.  It was considered correct for unmarried women to wear lighter colors than their married counterparts.  Entirely in white silk satin it is decorated with a self fabric knife pleated band with pearls centered on each pleat and a beautiful lace bertha-style fall covering most of the bodice. 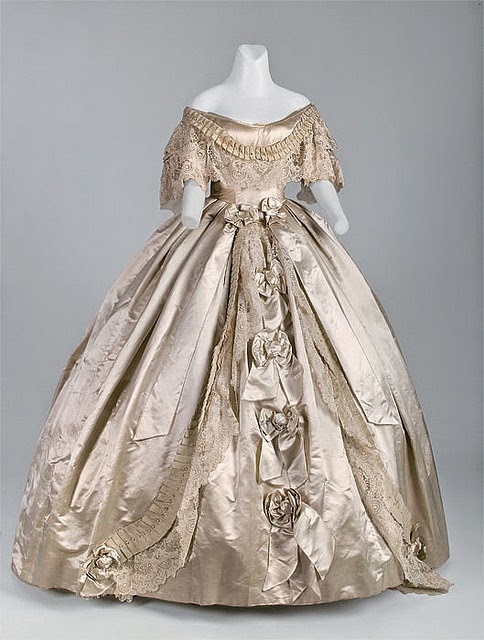 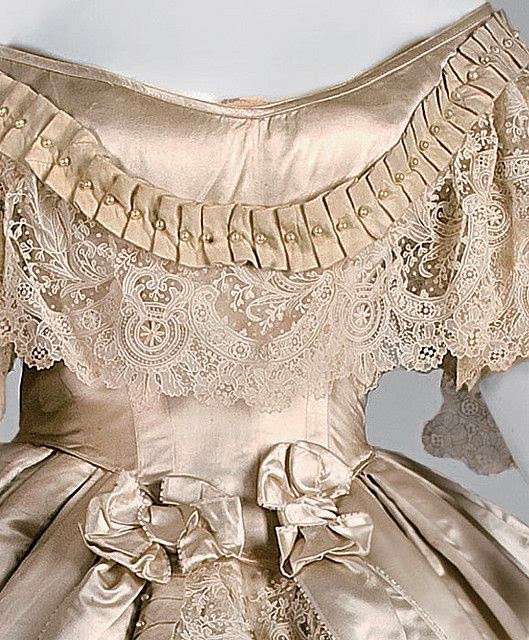