It's Scatter Time! Its my weekly random shot of things that appeal to me for reasons obvious, and obscure.
When the 21 year old Yves St Laurent took over the house of Dior, he brought a youthful energy and a completely different approach to the couture industry.  Where before his position there, the influences for couture clothing were nearly always coming from the top, he garnered most of his inspirations from the young, and from the street.  This dress from 1958 blows the lid off of the conservative couture image, and certainly took Dior into a wildly new direction.  You could certainly question the viability of such a look, and surely it never sold very well, or trickled into the mass market much, but it took the restraints off of women's clothes in a new way.  In a sense this look, and others like it were the harbingers of the explosion to occur only a few years later in the 60s. 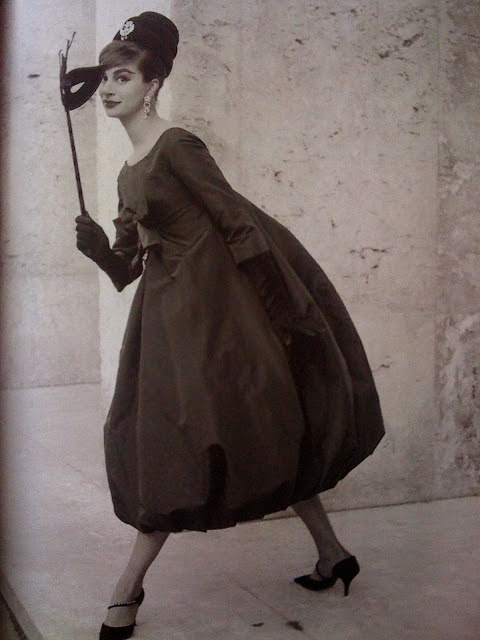 You all know how I love juxtaposition of disparate elements in design and presentation; and how I love tweaking gender lines. This image caught my attention for both reasons.  Surely men's hairstyles have never reached such absurd heights in history, at least, that we know of.  This rather cheeky/playful picture calls to question, both notions of masculinity, and notions of personal adornment.   Apart form this fellow's obvious charms, I think this huge hair actually suits him rather well.
One of the signature things about the design work of Elsa Schaiparelli was her use of embellishments of all sorts.  She was utterly unafraid of using quite unlikely things, and in combination with Lesage, created some of the most memorable surface decorations of that, or any other day.  This evening jacket is from 1937, and uses black glazed clam shells as buttons and a gleeful looking tumbling mass of plastic and glass beadwork along the jacket opening.  Its still delightful to look at, even from a distance of 77 years. 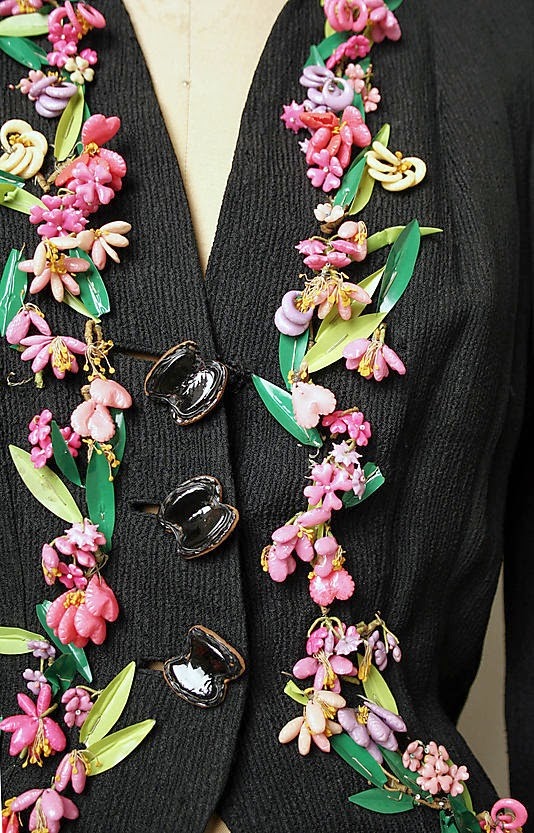 This look appeals to me greatly, both for the easiness of it, and of course because it incorporates a dress-like garment for a man.  The long tunic/robe of Chinese inspired print looks fluid and comfortable, and the paring of the floral jacket brings a level of elegance to the look I think is most attractive. Would I wear this? Hells to the yeah I would.  (Okay, without the cross earring, thanks) 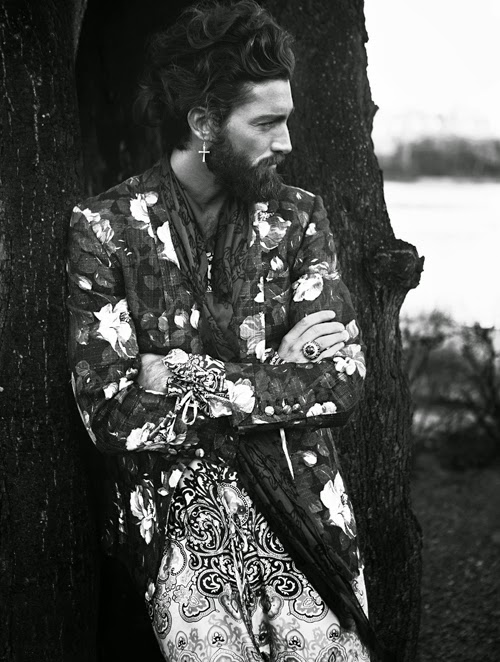 This diadem is unique. It is made of a huge strip of shell, carved as a scenic cameo, with two oval scenic cameos on the sides.  The top is a garland of leaves in diamonds.  It comes from the 1820s, and clearly references that times passion for all things classical.  Its a magnificent piece of craftsmanship. 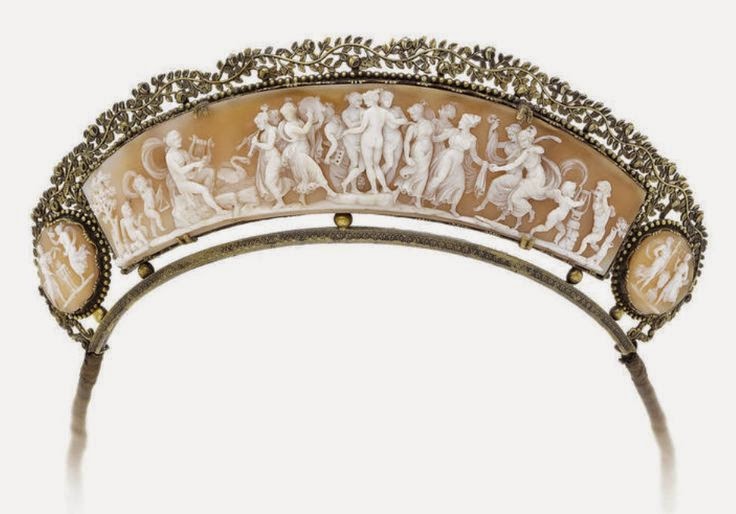 When I saw this image from the Jean Paul Gaultier F/W 2014 Couture show, I let out an audible gasp.  This coat is, for me, not only an amazing piece of workmanship in every respect, but a perfect example of how the avant garde can step cleanly into the wearable world.  This is simply magnificent, full stop. 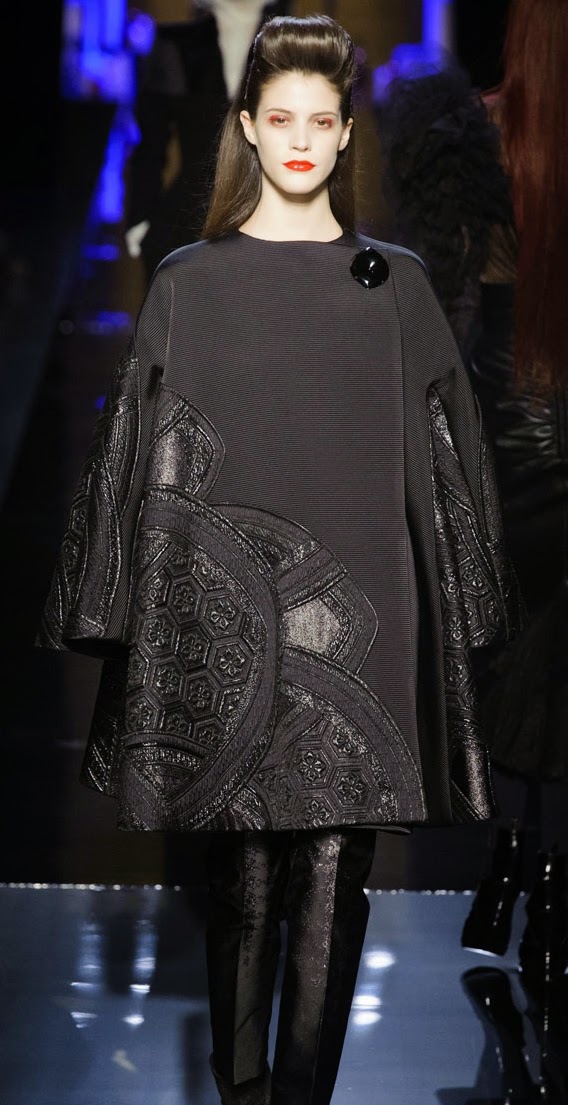 This outfit by Yamamoto makes me smile, both because its being worn by someone who is not a standard issue model in proportions or age, and also because it blows apart our notions of suiting.  I have long felt the need for the suit to morph significantly, or for it to disappear, for lack of relevance to our changing world.  This breathes new life into the notion of a man's suit, whatever you may think of the actual garment, the intent is wonderful. 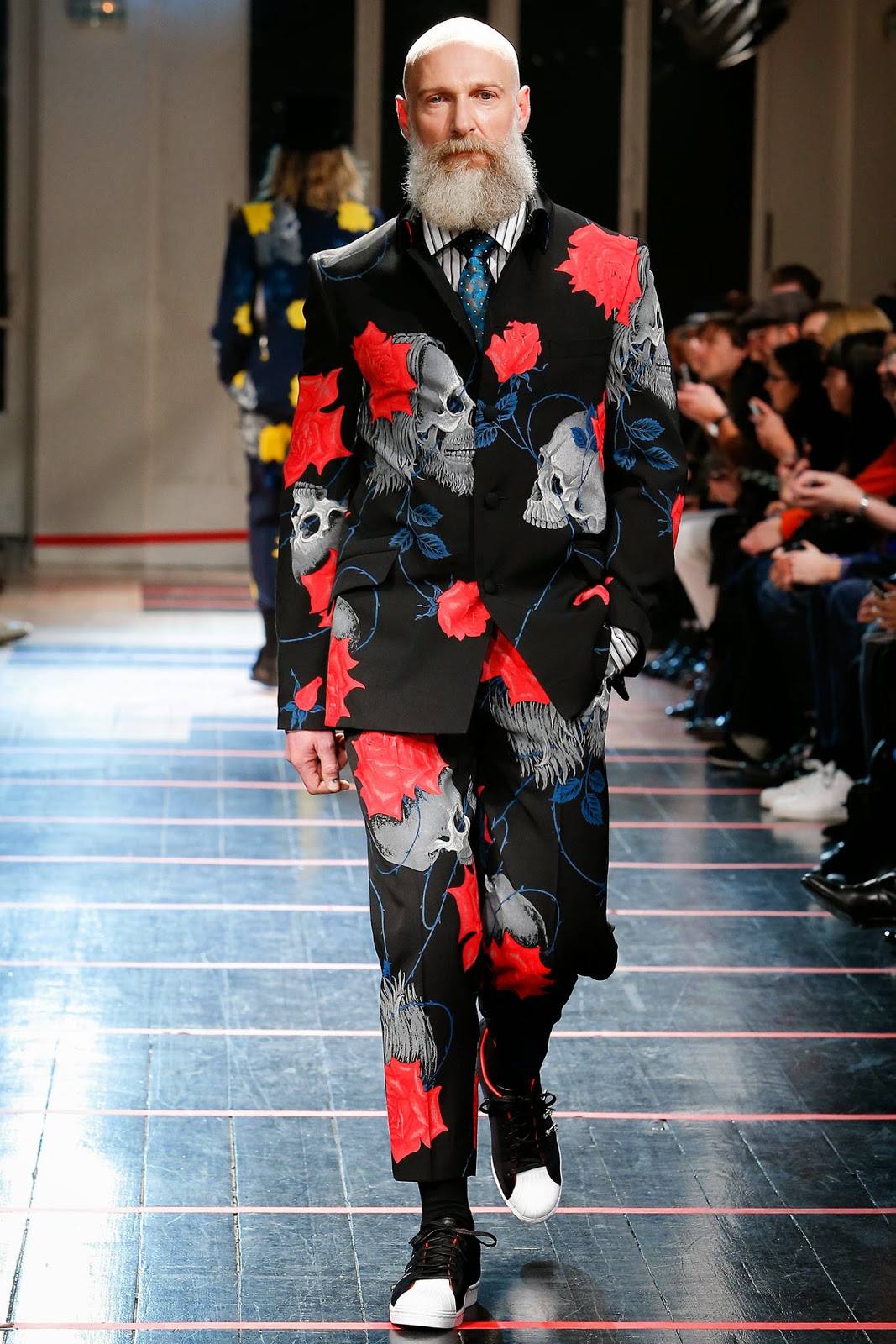 And, bringing up the rear, Mr Worth has something to share.  This glorious evening dress of 1889 is a nod by the Worth establishment to the Arts and Crafts movement, and the dress reformers of the day.  Though it is no less rigidly corseted than any other dress of its time, the draping is more loose, and the sensibility of it more relaxed, for all that its is made up in a very serious looking silk brocade.  The dress had a refinement owing to its relative lack of extraneous parts that is unusual for the time.  overall its a nearly timeless look, of great distinction. 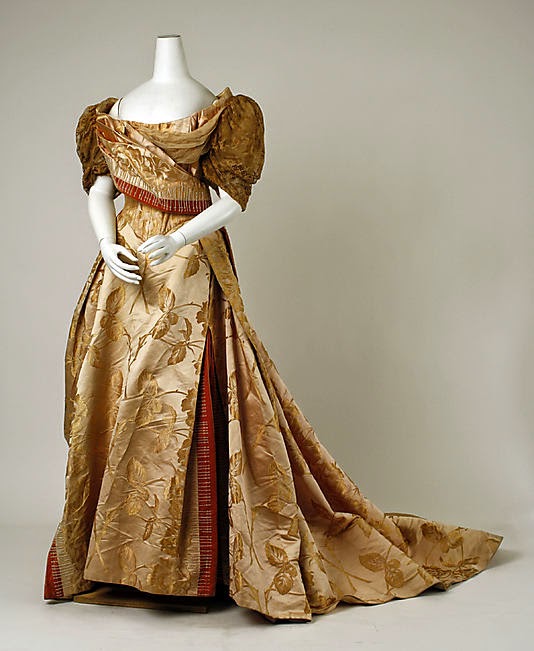 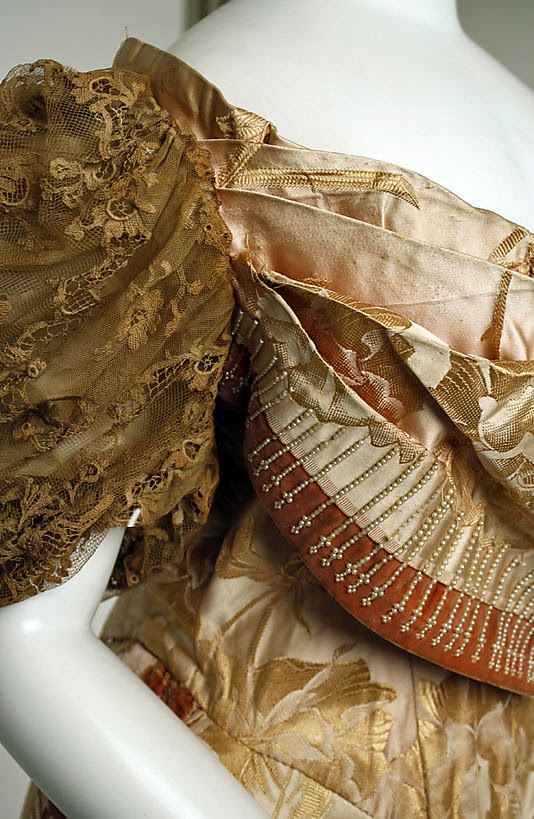 A woman could not help but feel magnificent in such a gown.
Posted by Paul G. Ellis at 6:46 AM