For the first item/s in this weeks scatter, take a gander at these two amazing gold snake bracelets.  They are a male female pair and are of Greek manufacture from roughly 200 BC.  So they are currently around 2200 years old.  They are utterly magnificent, and stand as reminders of the extraordinary level of craft that was achieved, without machines, long, long ago. 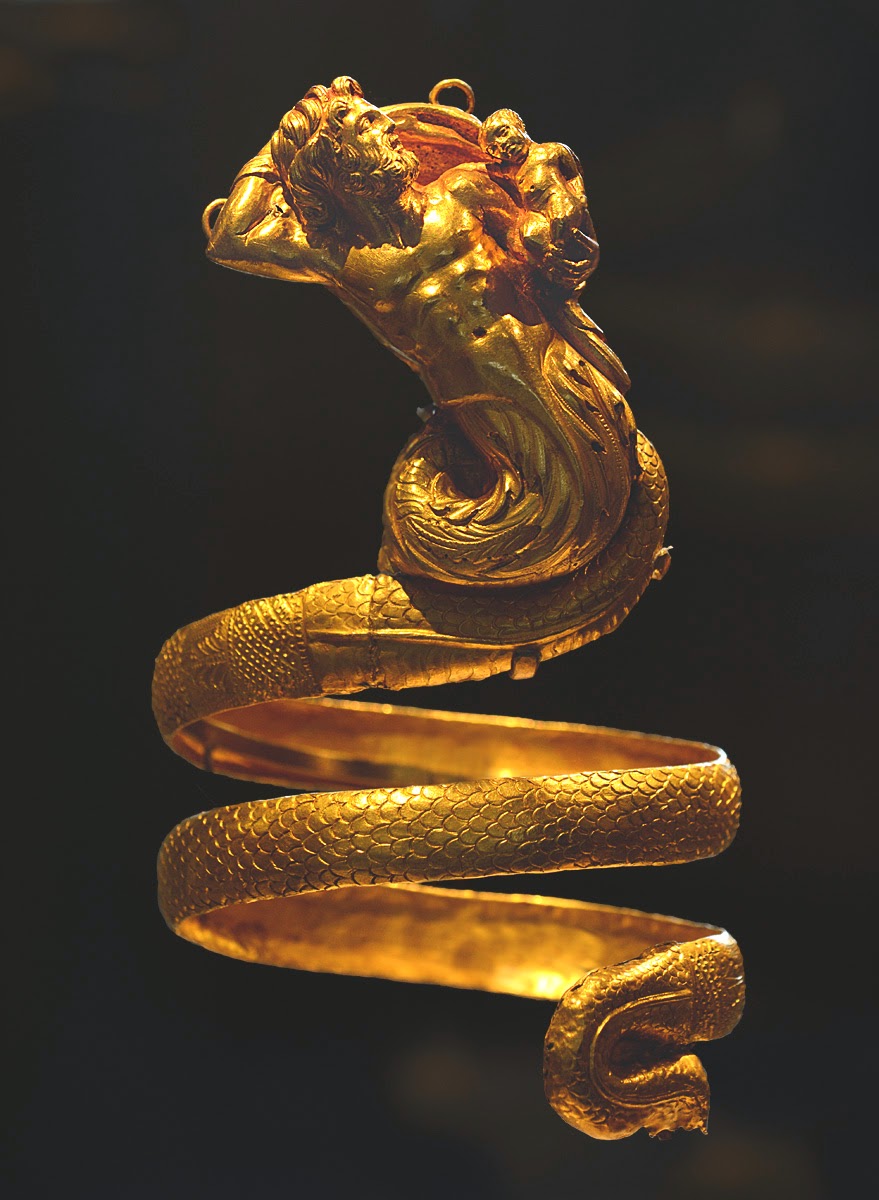 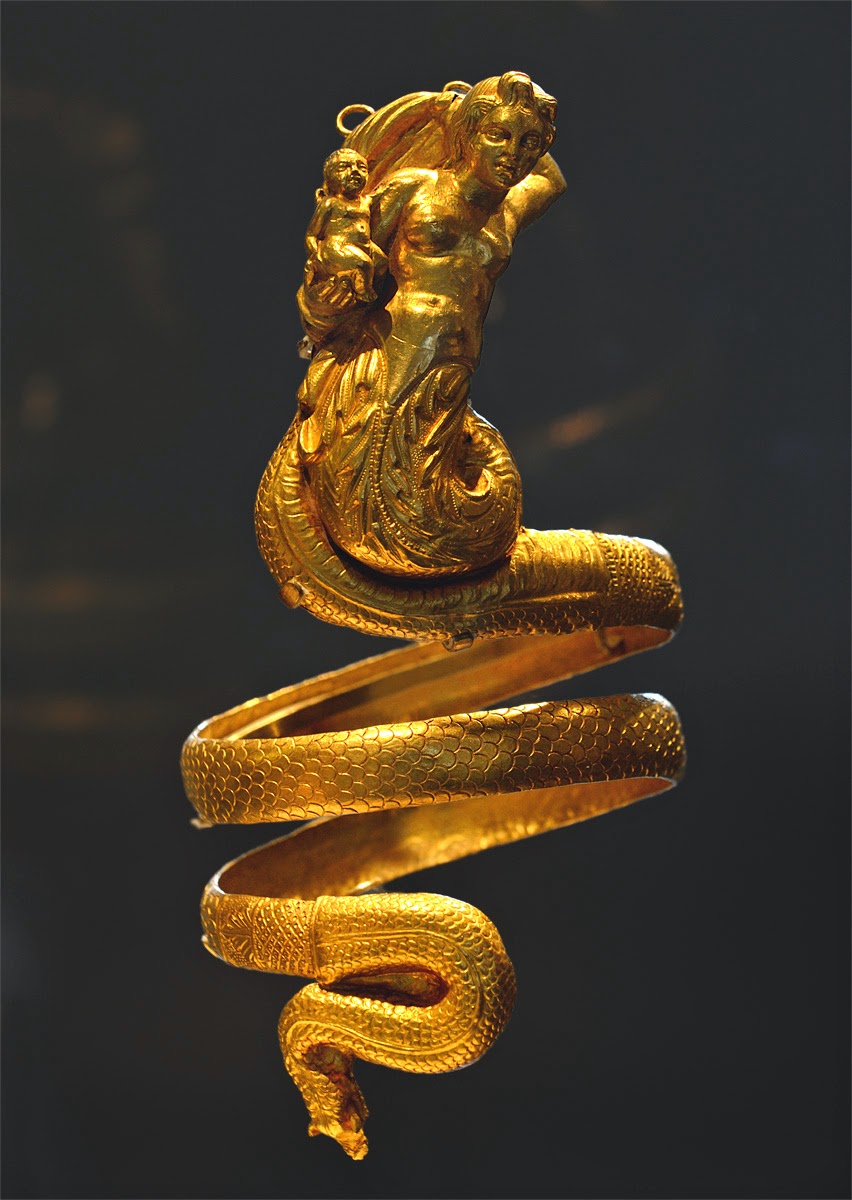 Next up is this wildly inventive conceptual piece from Winde Rienstra. I sometimes find myself in awe of the imagination that is emerging more and more often at the very edge of the fashion world.  Not only is this construct interesting to look at, it is flawlessly executed, which lifts it above many other experimental pieces to the world of art. 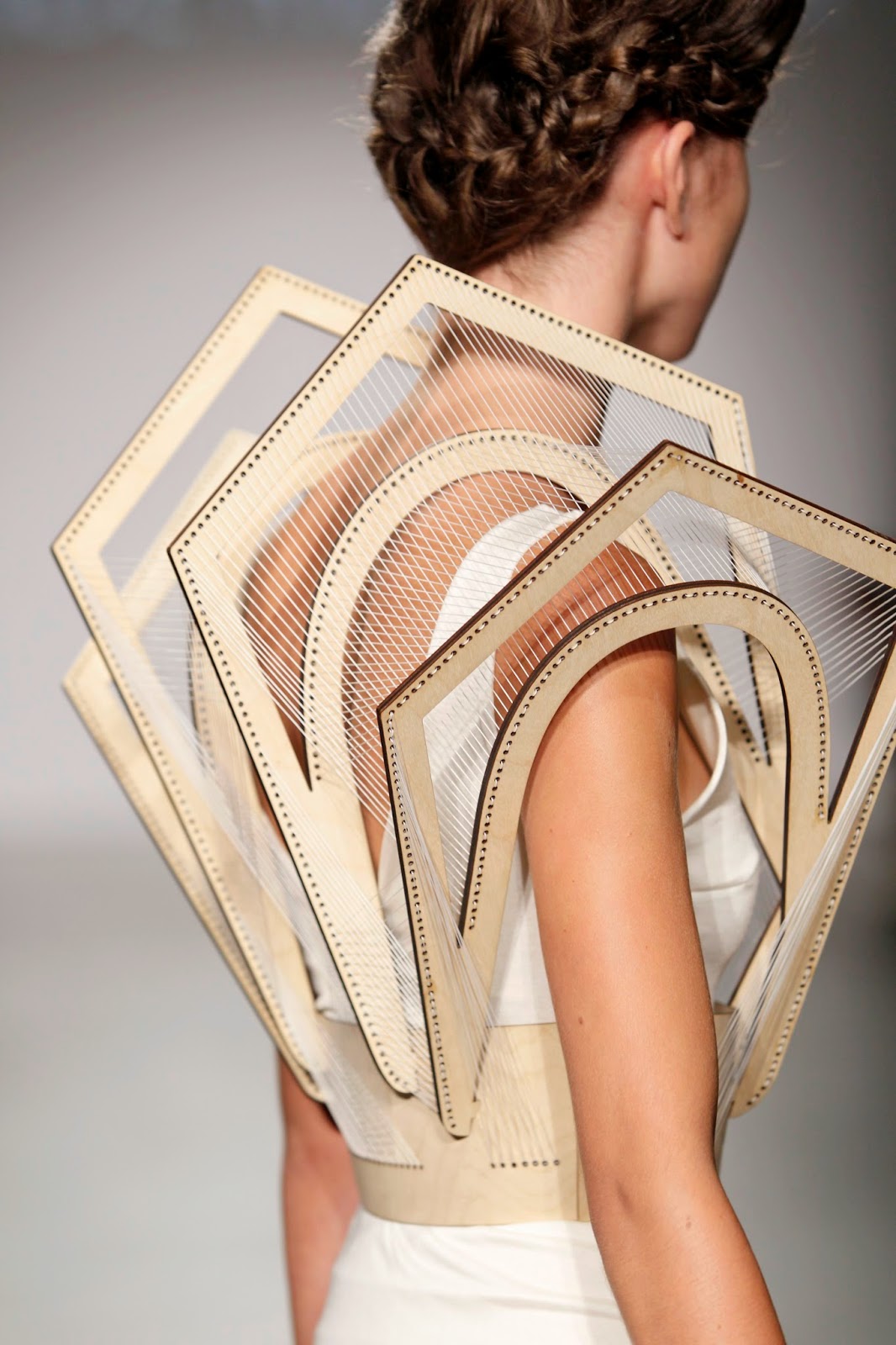 Now, I'm hardly going to quibble about getting to see lots and lots of the body of some gorgeous hunkaman.  And to be truthful, I'm not going to get snarky about the shirt, I suppose under the right circumstances, that garment might be a valid concept to put forward.  The only part that I'm not on board with is those shorts.  The fit is pretty awful.  They really shouldn't be pulling and bunching in the way they do.  To my eye the whole look succeeds or fails on the seamless smoothness of its presentation.  This doesn't get there for me. 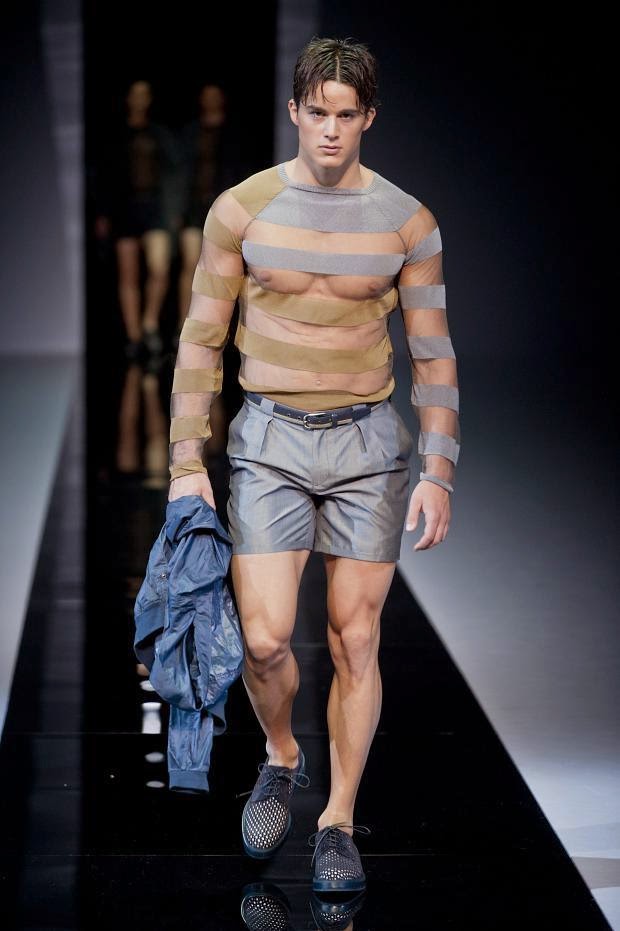 Next is Ms Rosalind Russell, costumed for her role as Sylvia Fowler in "The Women".  Its a great pic, and its also a great look at how a skilled costumer gives us clues about character and motivation through clothing and accessories.  The dress style pulls a couple of coming fashion trends, like the bustle, and puffed sleeves, and tweaks them, proportionally. The fabric is a narrow striped one that worked in this particular style of dress, creates visual confusion when looked at close on.  And the frankly silly hat is an adroit commentary of the frivolous and scattered nature of Mrs Fowler.  The whole thing tells us that she is a woman who is capricious, silly, pampered and off center.  its beautiful work from MGM's head designer Gilbert Adrian. 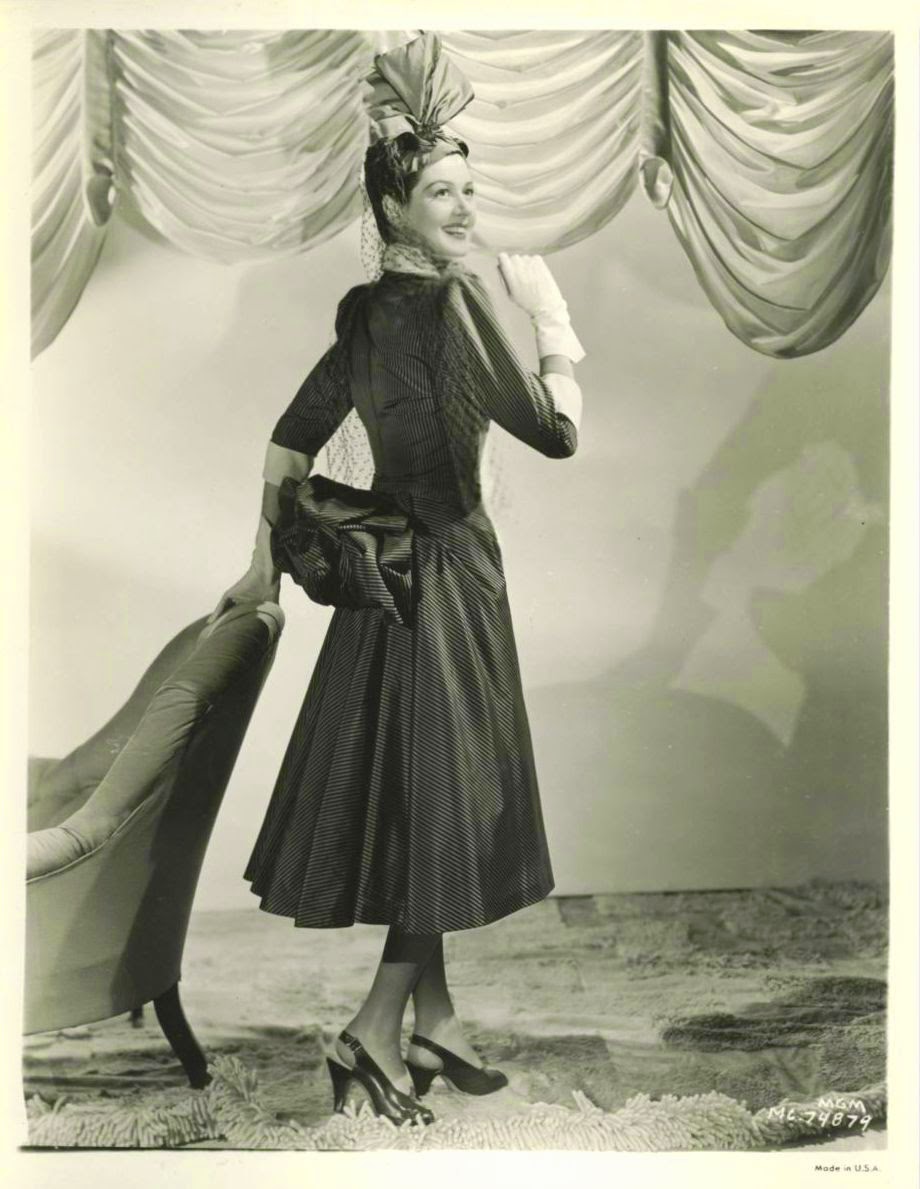 You might well wonder why this piece of sculpture is here.  Well, its because of his clothes, of course.  This is an image of the Buddhist deity, Virudhaka.  He is one of the four Heavenly Kings in the Buddhist tradition.  This image stopped me in my tracks because of the power of the imagined attire to give us insight into the status, role, and aspects of this member of the pantheon.  He is comparisoned as a warrior in armor, which connects to his protector role, while the extravagance of  the clothing indicates his lofty status. 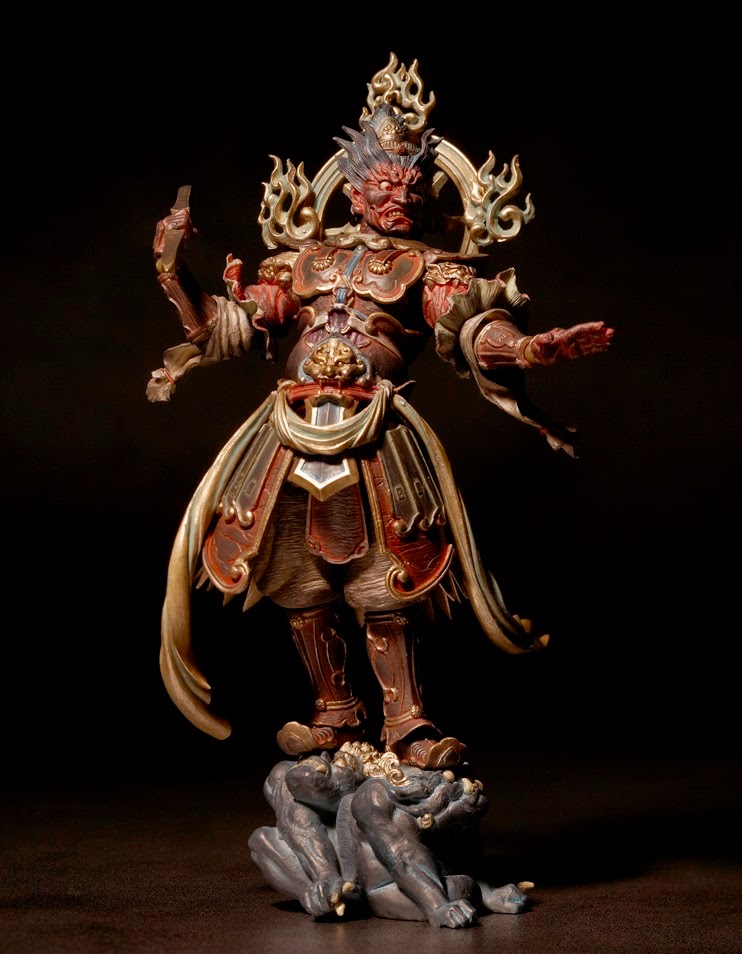 This French bonnet is from the 1880s.  It was a time in women's clothing styles when hats served really no purpose whatever beyond the decorative.  Perched atop masses of hair, these tiny confections were overt statements of sentiment and sensibility by the wearer. Its made of black Chantilly lace on a wired frame, overlaid with gold metallic wired lace, with folds and bows of shell pink silk ribbon, with flowers and a trailing black velvet ribbon bow down the back.  Charm itself. 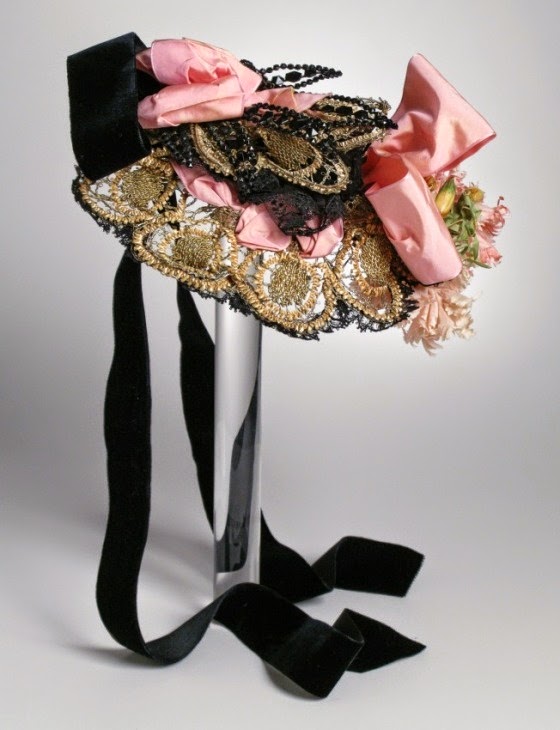 Here's something else from the V&A.  This simple shirt and breeches are from the 1750s.  Its worth looking at for a couple of things. First it shows clearly how a shirt was cut and fitted in that time.  Up until the middle of the 19th century, most often gentlemen and ladies slept in their shirts or shifts.  That is part of the reason they were cut so fully, and so long.  The shirt you are looking at, if untucked, would hang to nearly the knee of the wearer.  The second point is the fit of those breeches, which is notable mostly for the placement of the pockets.  To today's eye they would seem awkwardly placed; being low and fully frontal.  But to a gentleman of the day, the mere existence of them was a boon.  So placement was less an issue. 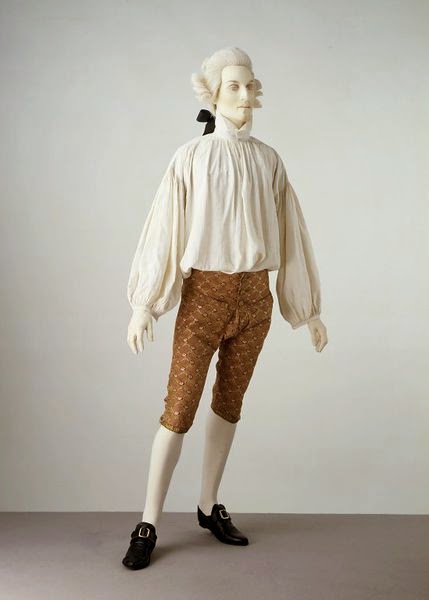 This Worth dress is one I've been saving to show y'all for some time.   Every time I see these images, and yes, I've looked and looked at them I am dumbstruck by the levels of skill and artistry on display.  This was designed by Worth's son Jean Phillipe, who took the reins after his father died.  Its made of a magnificent warp printed silk in a multicolored floral.  The fabric has been extensively cut out and inserted around and into the cream colored embroidered lace of the skirt and bodice.  This dress is the epitome of grand luxe at the beginning of the 20th century.  Perfection. 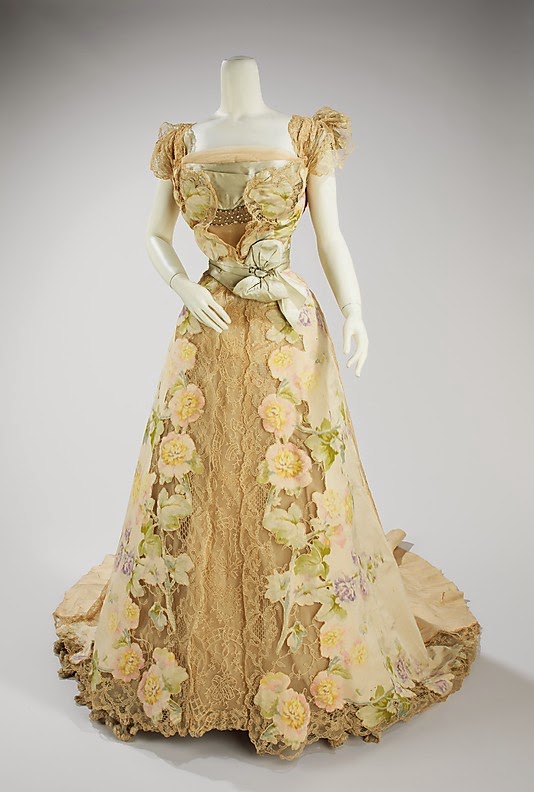 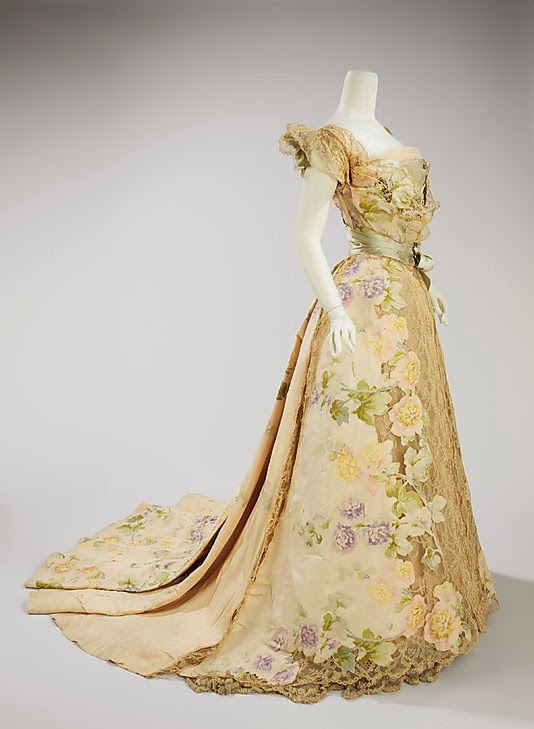 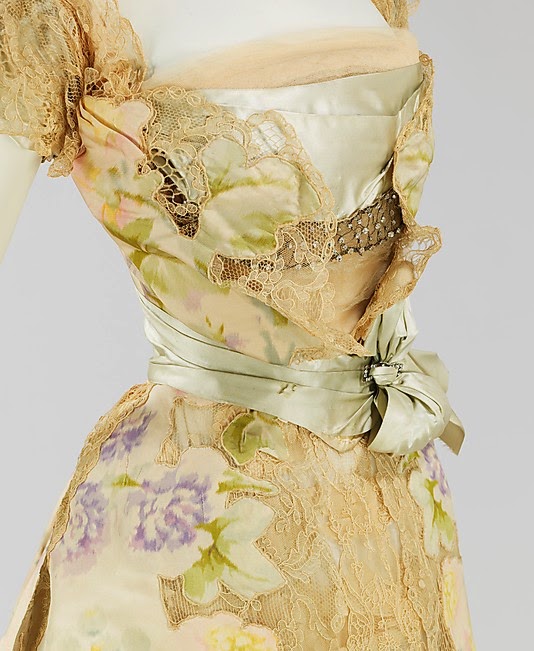