Romain de Tirtoff (Roman Petrovich Tyrtov) was born to a distinguished Russian family in Saint Petersburg in November of 1892, but lived the vast majority of his life in France and the USA.  His working pseudonym, Erte', was based on the French pronunciation of the initials of his name.  His father, a highly respected Admiral wanted his son to become a naval officer, but Romain's first love was art and design.  So, in 1906 at 24 he had his first encounter with Paris, and moved there in 1910 to pursue seriously a career in design. 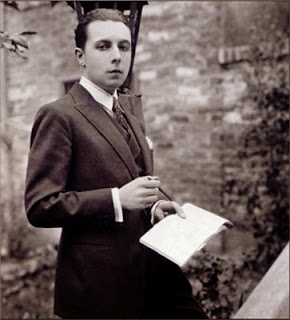 Most people today know him as primarily a creator of elaborate, fantastical costume illustrations, since he re-upped his career in the 70s and 80s marketing his extraordinary illustrative work to the masses.  But his first love, and something that was an important part of his career was his work designing costumes and sets for dance, theater, end eventually for film.
He did work for the Ballet Russes, for theatrical revues both in Paris and in New York, and for Opera. 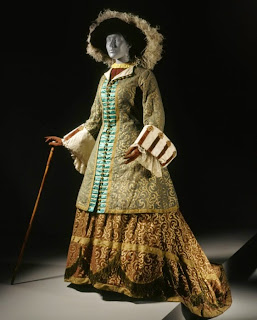 And then, in 1925 he was lured to Hollywood by Louis B Mayer with a generous contract.  The resulting association was fraught with problems, and Erte' didn't long survive the relentless pace and personal restrictions laid on him by Mayer.  He had been brought to MGM to design a film called Paris, but production problems made Mayer assign him to other projects.  He worked on Ben Hur, Dance Madness, Time, The Comedian, and The Mystic. He had previously designed costumes for Marion Davies in the William Randolph Hearst production, Restless Sex in 1920.  Sadly, almost none of these films still survive in their entirety. 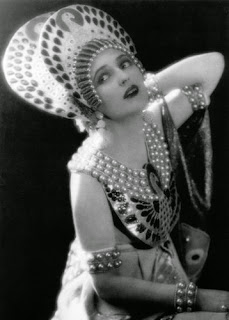 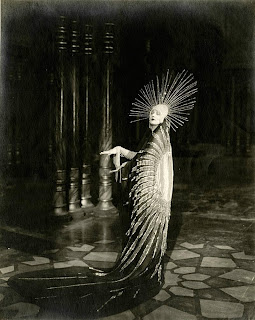 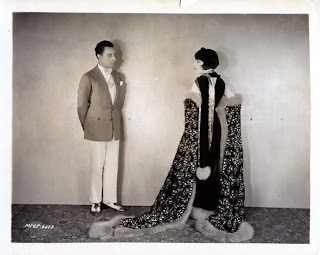 Now what, you might ask, makes Erte' relevant to a discussion of Attire language?  It comes down to this.  His instantly recognizable style influenced not only apparel design in his own time, but created clothing styles decades later; and his artwork and design still affects the work of designers today.  His lean, elegant women became a goal to strive for, a vision of supreme exotic beauty that has called to endless numbers of people, both in and out of the realm of clothing design.
His drafting of textiles, had little if anything to do with how fabrics actually move and drape, and that sometimes created problems between a rendering and a realized costume, but I just don't care. (smiling) 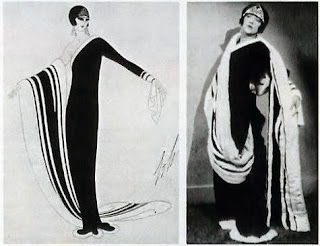 I'll close this off with a few of my favorite illustrations. 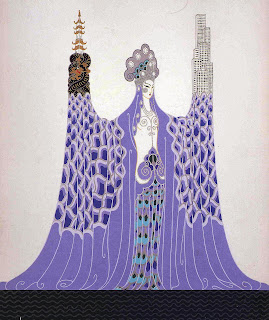 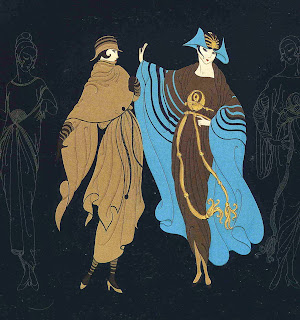 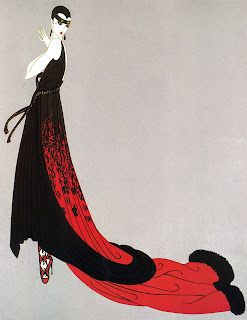 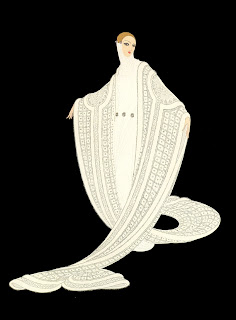