This coming week is the Thanksgiving holiday in the United States, and I must say, I'm mighty grateful to all of you who routinely check out my blog and give your often so interesting comments.  You are who this is for, beyond just doing this for fun.  So that said, here goes this weeks Scatter.

When I first caught sight of this portrait of a gentleman of Burkina Faso I was so struck by power, grace and regal nature of the image that I pulled it aside instantly as something for a scatter post.  See, he certainly conveys command with his posture, pose and regard as he looks at the camera, but more than that, his own demeanor is enhanced significantly by his clothing and adornments.  The size, volume, and drape of his robe commands attention, as does the dramatic and beautiful pattern of the cloth. And though we do not understand the probable significance of his necklace, its scale and length suggest that it is more than just an ornament.  Even when we don't, because of differences in culture, understand the full meaning of the Attire sentence being presented, we are still able to glean some understanding from what we see. 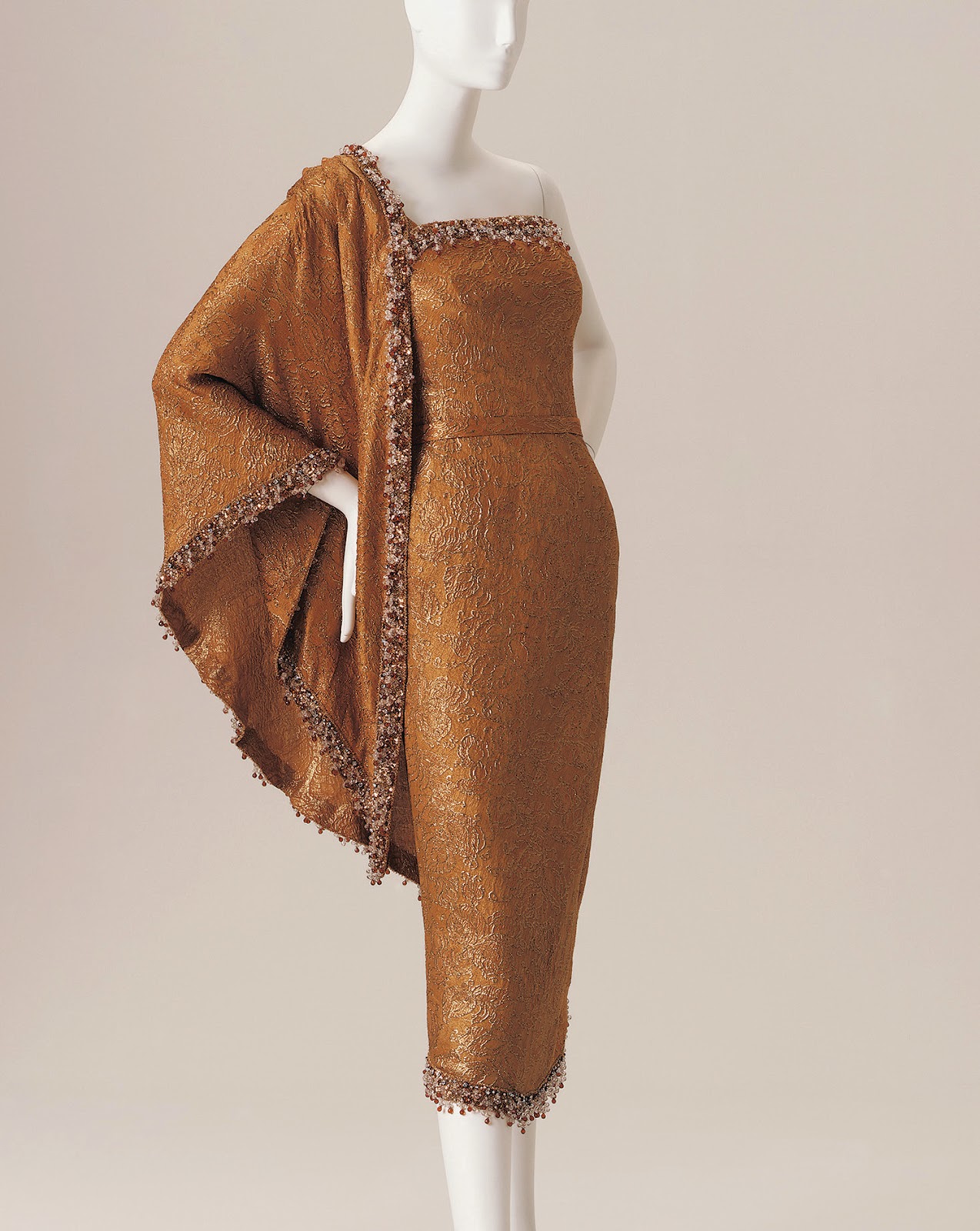 I have spoken about timeless design many times, and here is another example.  The critically editing eye of Crisobal Balenciaga brought this into being.  Essentially he has re-visioned a sari into an evening dress, by paring it down to the basic elements present in the sari of the square neck, and the sweep of fabric over one shoulder.  This garment could be worn right now, though it was designed 50 years ago, in 1964. The metallic cloque' fabric and the densely beaded appliqued band of trim all about it harmonize perfectly.  Its a truly wonderful updated take on a classic manner of dressing the body. 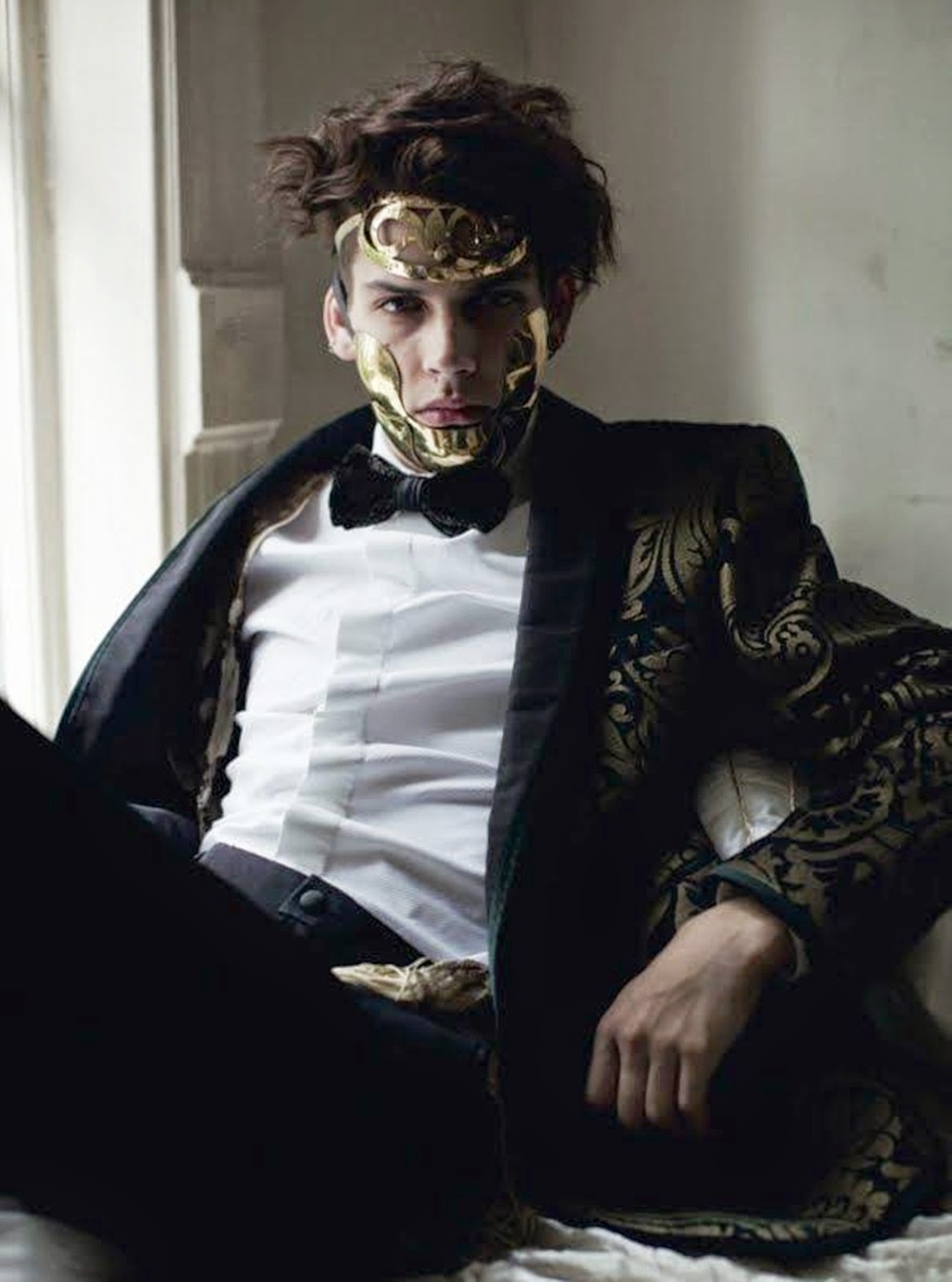 You know me, every now and again I have to throw down a challenge to you all.  When I saw this I was, of course, struck by the strangeness of the image, especially the juxtaposition of the largely unremarkable evening wear and the gold metal facial plates.  Not a mask, though they do conceal, these plates are trying to force our attention towards the face of the model.  What makes this a miss for me, is that in this case, the model isn't up to it himself.  His gaze, which should overpower the drama of those metal pieces, is swallowed by them; so your gaze goes to them, not to his features, as it ultimately should.  Do I think such jewelry is going to make it into the Attire language as a working word? nope.  At least not any time soon. 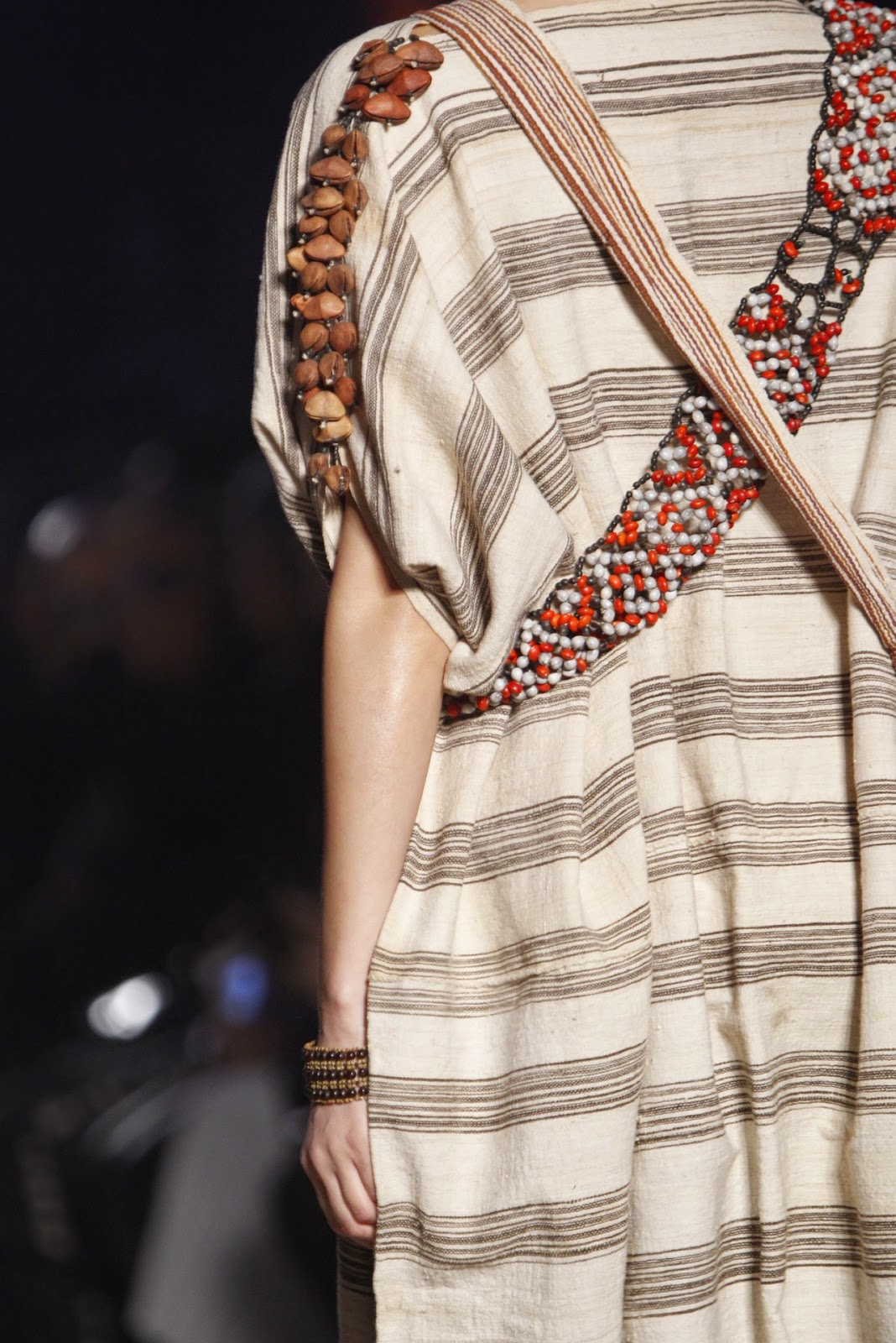 This detail image is from Vivienne Westwood's Fall 2014 RTW collection.  Sure, designers commonly trot out ethnic references, taking cues from cultures all over the place.  What appeals to me here, is that it seems Westwood is creating an entirely new aesthetic, that is not clearly any one place, time or people.  And that is why I'm posting this.  To my mind a truly successful designer is one who finds a new way of communicating using textiles, trims, and color.  Yes, this speaks of long established peoples whose lives are closer to the land than ours, but it also steps into the current moment, able to speak fully in our digital age. 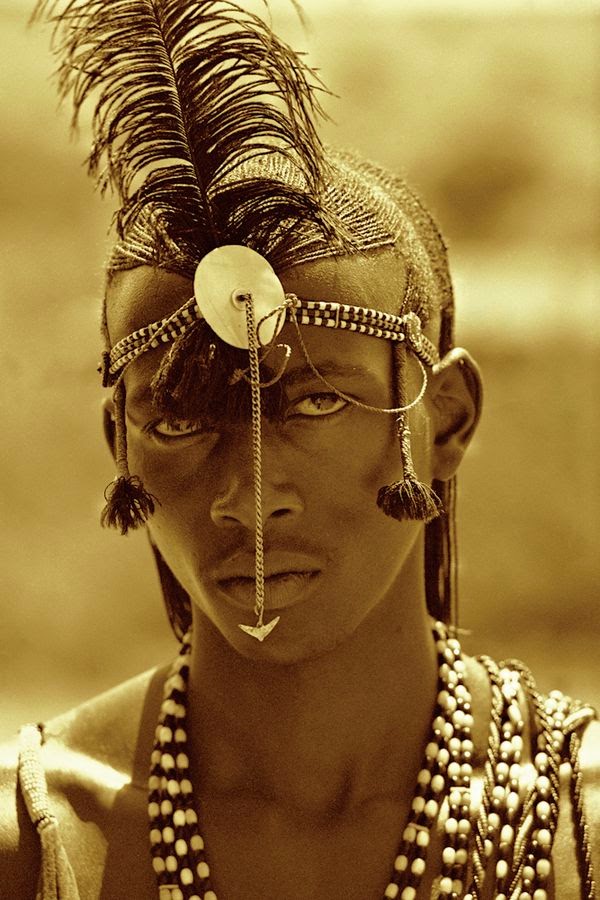 Where the previous fellow, wearing the metal facial plates was devoured by his decorations, this stunning young man is fully in control of the varied and complex facial jewelry he wears.  He is a young Masai warrior, and the nature of his adornments is such that everything contributes to focusing our attention on his face, not on the many things on and about it.  Its only when we can pull ourselves back from his intent look, that we can parse out the many elements in play.  And like the first image today, though we do not know the full meaning of everything here, we get an overall sense of the intention. So, like hearing a foreign language we do not speak, we can, by listening closely, get at least some of the gist of it. 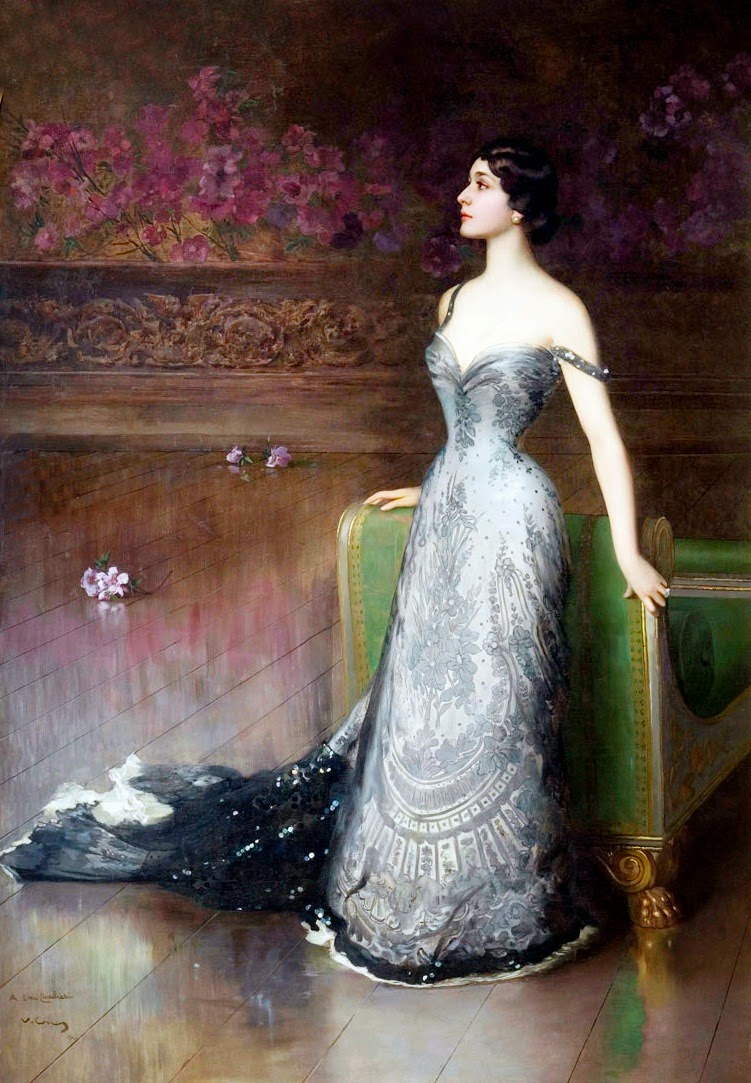 Portrait of Lina Cavalieri by Vittorio Cerces, done in 1903. Miss Cavalieri is dressed in the apex of fashionable evening attire in this portrait.  The beautifully edited dress is all about the smoothly sensual shape, and the surface texture is a subtle one, with the close fitted lace overlay of the dress.  The only real strong punctuation is the heavily sequined hemline of the dress.  In motion this must have been magnificent.  At a time when the bodice of an evening dress could be overburdened with silk flowers, tulle and other stuffs, this one is nearly featureless, which also allows the eye to fully appreciate the lady wearing it. 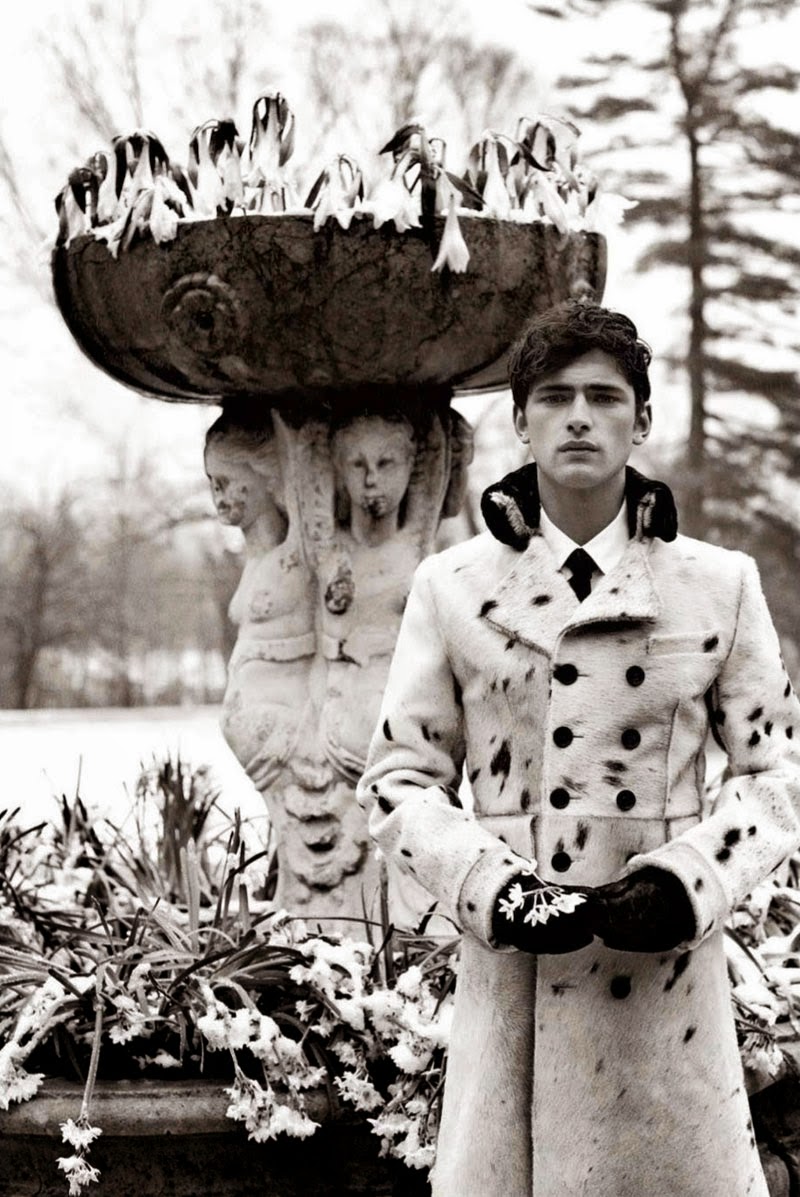 In 2011 the October issue of GQ Russia presented this look.  The style of the coat is straight out of 19th century menswear, and the standing upper collar is reminiscent of military wear.  I have no idea if that is fake or real fur, and if real what sort of fur it is.  And I'm not getting into an ethics discussion here. I'm focusing on the communicative capabilities of this coat.  While, being fur, it could convey luxury and wealth, its rigid structure and tight fit make it something else. Its a visual confinement, as well as a statement of material freedom.  So its a physical dichotomy, and that is something I find compelling to look at.  In various situations, and on various people this coat could convey a huge range of different things. 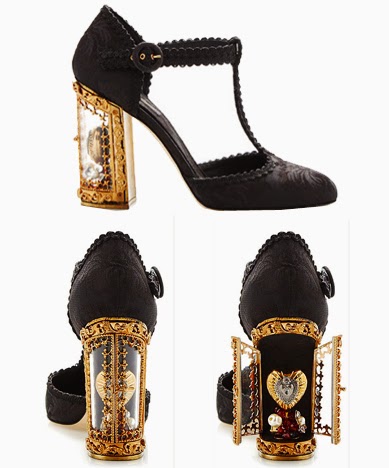 This is a pair of shoes from Dolce & Gabbana from the Spring 2015 Couture collection.  It is sometimes the purpose of a garment or an accessory to do little more than make us smile.  This is a pair of shoes that are not meant to be taken in deadly earnest, even though the imagery is of Catholic reliquaries.  Utterly impractical, nearly unwearable, they are a loud and clear statement about having oodles of disposable income to toss about on a pair of shoes that might be worn once.  I can appreciate the technical skill required to create such shoes, but I can't say I'm in love with either the concept or the reality. Oh and the price? 3995.00. 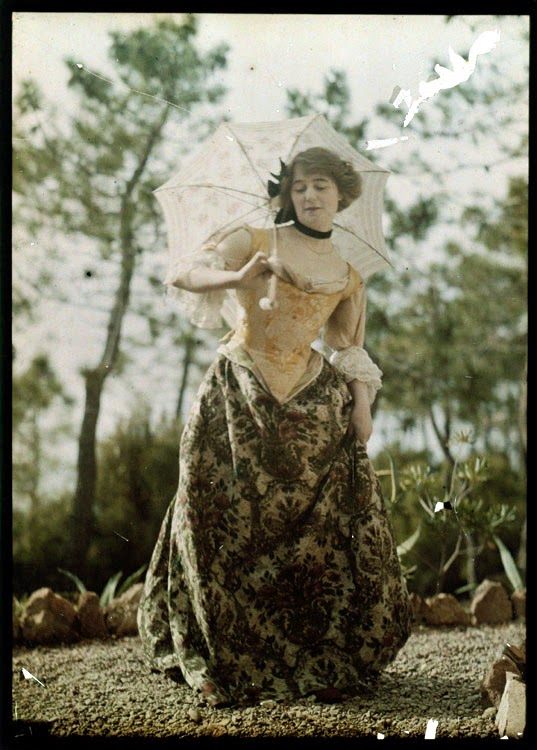 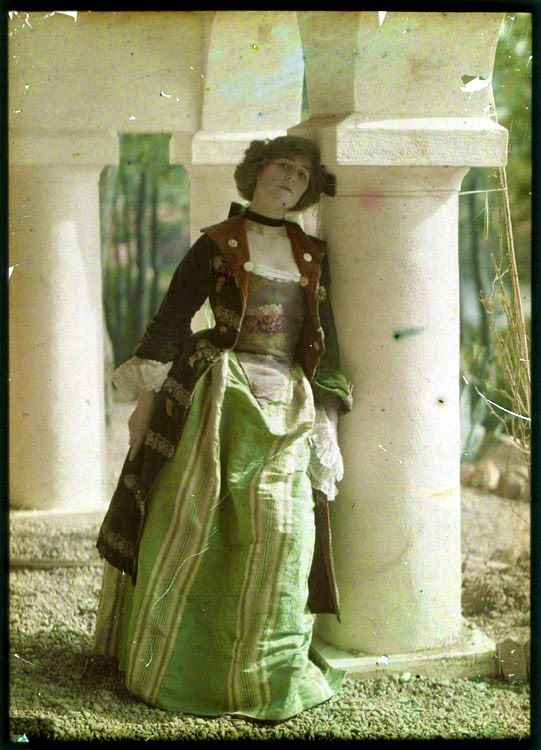 These two autochrome photographs are of a young woman posing in "historical dress" for the photographer.  They were taken in 1910.  What's interesting to me here is that, as happens most often when we are trying to reproduce a period, we get elements of it wrong. Her hair in especial is fully 1910, not as it might have been in whatever periods they were going for.  Also, the image with the parasol is an utter anachronism.  Such sun shades didn't exist in that way in the 18th century, if that was the intended time period.  But, if these are meant to be fantasies entirely, then job done.  at the end of it, they re both charming. 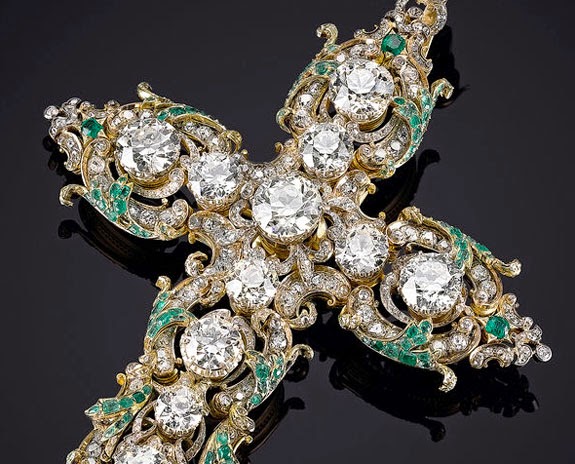 One of the things I find fascinating about jewelry is the history they accrue as they pass from owner to owner.  This gold diamond and emerald cross, in the Baroque style has had to extraordinary owners in its time, who could not seem to be further afield from each other.  That this was owned by Pope Paul VI, makes a great deal of sense, but then it passed to other hands.  Are you ready?  None other than daredevil motorcyclist, Evel Kinevel.  Yup.  The geek in me is dying to know how THAT happened, and what made Kinevel interesting in owning a jeweled cross.

Well, that rounds out this week's scatter shot of stuff.
I hope you all have a wonderful weekend!