Picking up the odd bits and snippets of my mind each week and sending them out to you all, is as much a way to clean house, as it is to inform and entertain. (grin)
So, here's this weeks set of scraps from the floor of my brain. 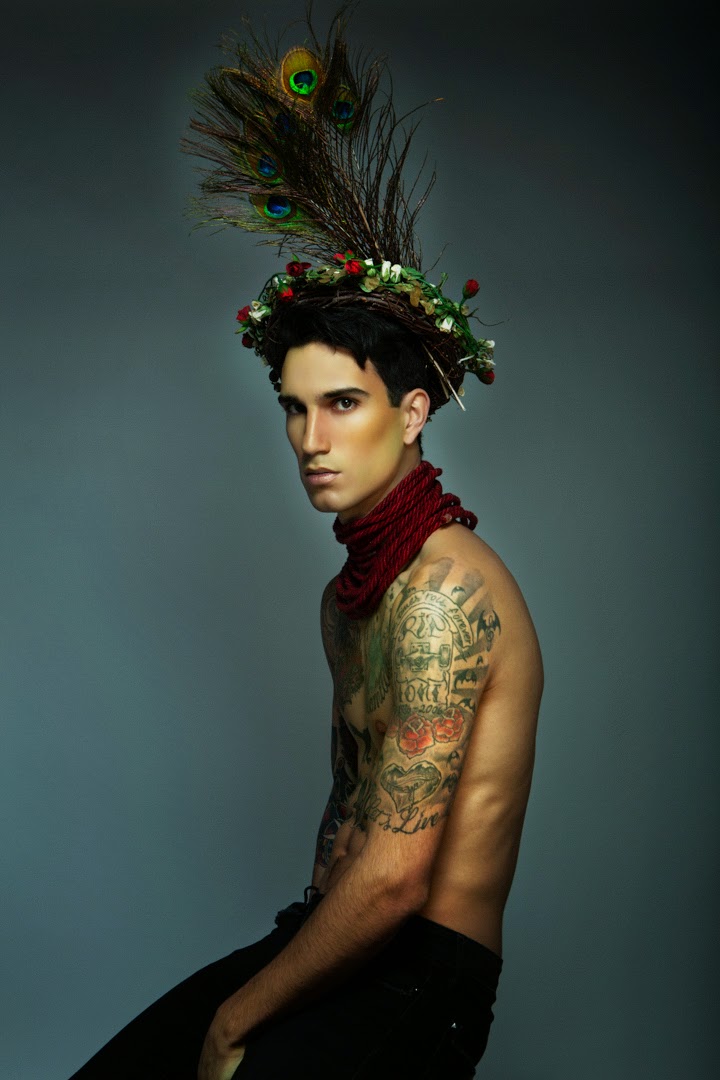 This first image made me think of how we treat the males of our current culture, and how hemmed in in many ways men are. Sure men are running things in a temporal sense, but in other ways they are just as oppressed, just as held back.  Within western culture we have boxed men into a corner, sartorially.  Fortunately that box is finally beginning to break down, but that's the stuff that came up for me, looking at this image.  If men were allowed more freedom to express themselves without fear of social reprisal, would men feel as much need towards aggression? I don't know the answer, but its an intriguing question, no? 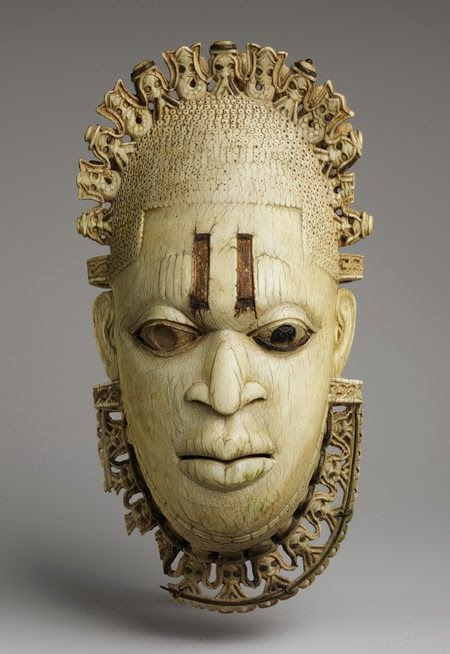 This is a Queen Mother pendant mask.  Its from 16th century Nigeria, made by the Edo people of the court of Benin.  I love this both as a work of considerable beauty, but also as a statement about human transformation, which is, as you all know, one of my go to topics here.  There is a sense of profound, enduring strength here. I'm spellbound. 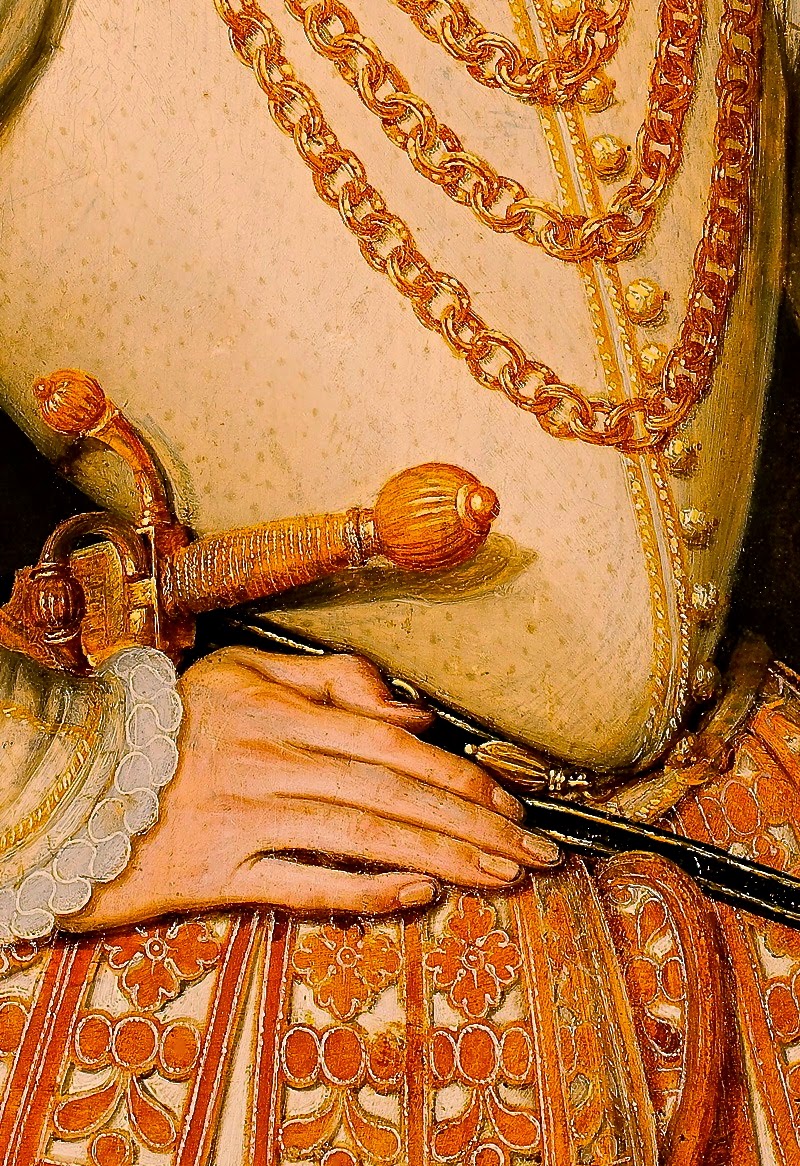 This detail image of an anonymous French nobleman from 1506 shows two of the more strange men's fashions in Attire history.  The peascod belly doublet was fashionable for about a 10 year span from the 1560s through the 70s.  The shape was achieved with stiffening, sometimes with cardboard,  and padding, that made the out-jutting shape rock solid, and interestingly was a reverse image of the arc of a man's codpiece, the other sartorial weirdness in play here.  As a psychological ploy, the two deliberate forward thrusting shapes were clearly intended to promote thoughts of male power and virility.  The upward angle of the codpiece implying a man's stiffened resolve, and the downward angle of the peascod belly, his willingness to fight his stance when needed. 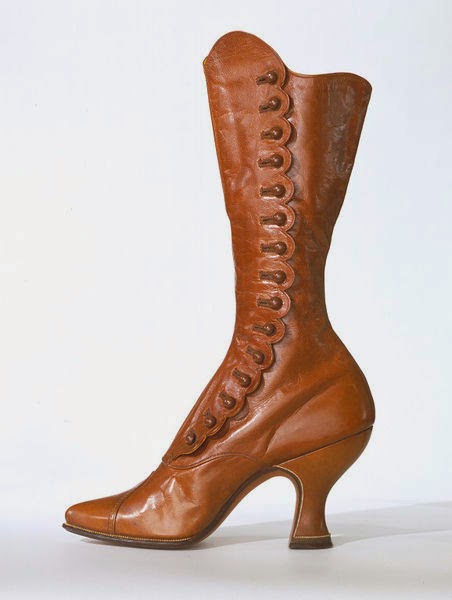 Vienna was the home place of these marvelous boots from 1900.  With 15 buttons up the side, the obviously custom boots would've required a buttonhook, and probably a ladies maid.  They're of caramel colored kid, and as an apparel word, I think they are marvelous. 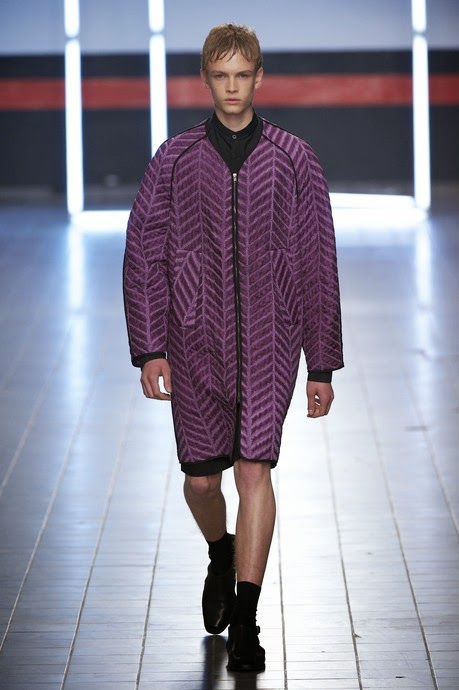 Designer Damir Doma did this interesting coat for a recent menswear collection.  While I certainly would have preferred to see it styled differently, I can't fault the coat itself.  I love the color, the over-scaled herringbone pattern, and how well its been used in the pocket area to create interest.  What would you like to see it shown with? would you wear it? 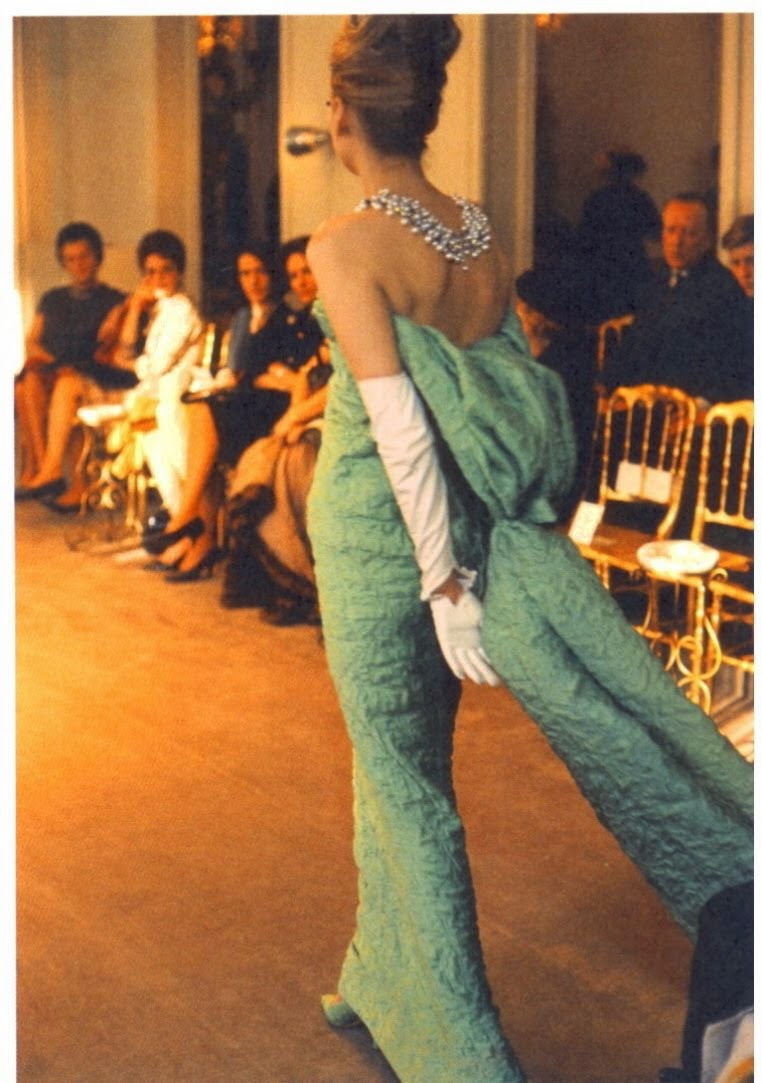 In the Summer of 1963 Cristobal Balenciaga showed this minty green evening dress at his Atelier in Paris.   The densely puckered fabric was one that had a good long run of popularity in the later 50s and early 60s; cloque'.  The fabric gets its pronounced texture from the weave structure, as variations in tension cause puckering to happen. The couture was using this as a go to fabric while the silhouette was steadily gaining the rigid space aged look it acquired in the 60s.  It allowed couturiers to play with contemporary shapes, while still giving couture clients that sense of luxe and exclusivity they wanted. 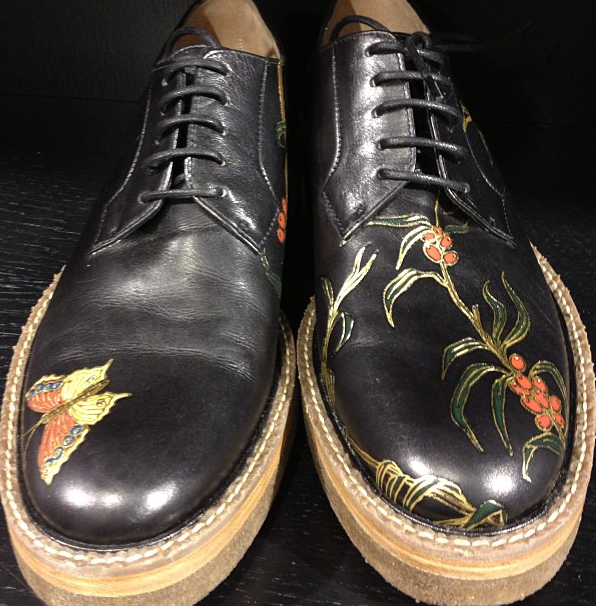 Shoe Pron, plain and simple.  These are by Dreis van Noten.  part of what I find appealing about them is the juxtaposition of the fruit, floral, and insect decorations with the big chunky shape of the shoes themselves.  Would I wear these?  Oh HELL yeah.  Would you? 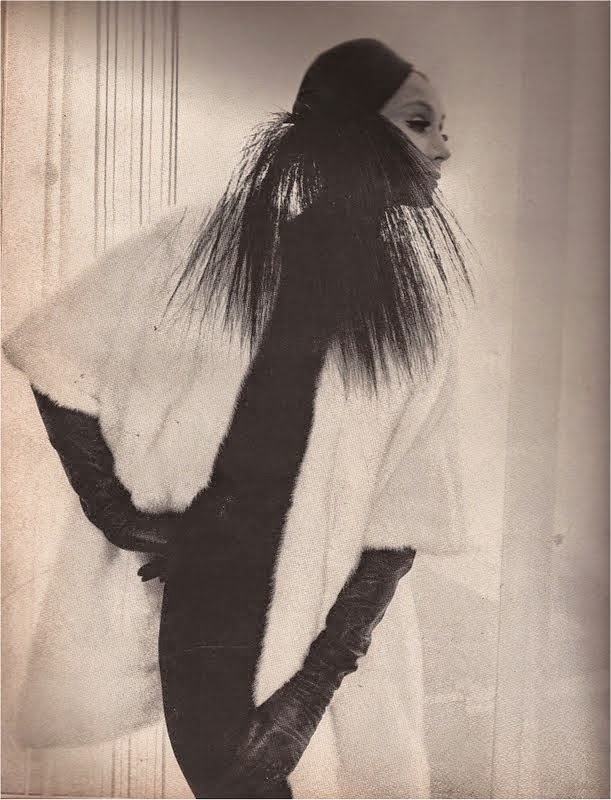 Sometimes, an image from the fashion world is so thoughtfully done that it leaps the gap from illustration to art.  This is just such an image.  Its a glorious, graphic, and yet ghostly looking image.  It possesses both power and fragility in equal measure.  The white mink is by Alexandre and the silk faille hat with the burnt ostrich plumes is by Mr John. A remarkable image. 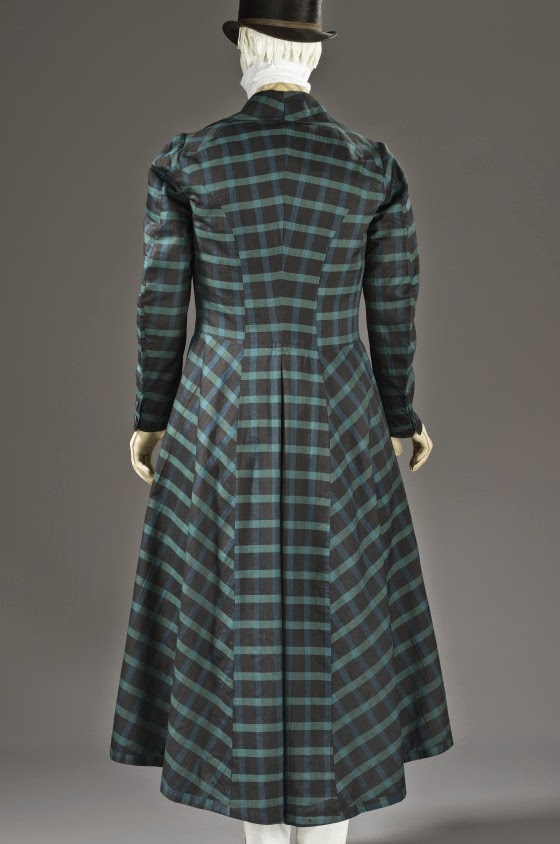 This is a gentleman's frock coat from 1820.  Made up in a wonderfully colored plaid fabric this would have been just the thing for the dandy of the family.  I love the flattering shape, and the generous fit at the sleeve head that widens the shoulders line.  Also, after this time the frock coat would begin to shrink.  Eventually with its hem ending below the knee, but above the calf line.  So this is the beginning of the end for this wonderfully extravagant fashion.  And now, as an Attire word, its shorter cousin is relegated to formal weddings only. 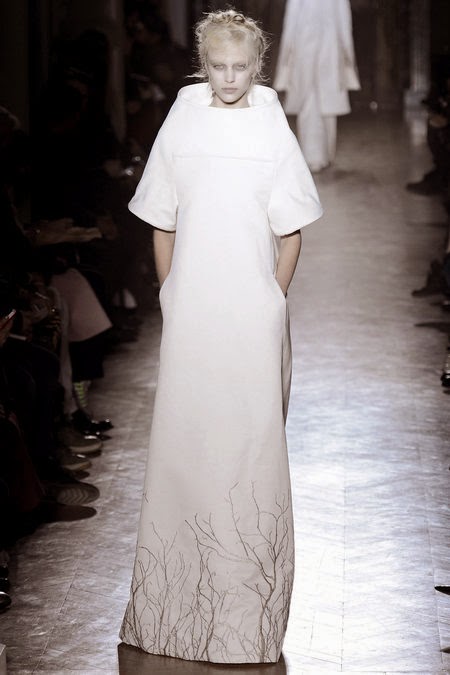 Gareth Pugh is one of my favorite avant garde designers.  I like the extreme editing of his work, how he focuses all his energy on paring down his looks to a few essential elements.  This white evening dress I actually think would be quite flattering on a lot of women.  And I enjoy the use of the branch motif, that keeps it stylishly barren looking, without overwhelming the clean lines of it.  Seen in other colors I can imagine this being extremely appealing looking.

So, that's this weeks pile of oddments and interests.  Have a splendid weekend!
Posted by Paul G. Ellis at 4:38 AM