The weeks roll by fast, no?  Especially as we plunge headlong into that annual craze fest known as the Holidays. But, as you see, I am undaunted.  The scatter goes on, as it should. 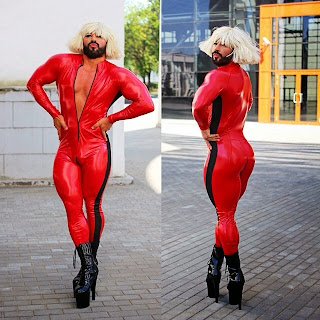 This first image made me smile, actually.  This fellow has been making quite a thing of himself of late, with his willingness to at once embody the hypertrophied male ideal with his heavily worked out frame, and the frankly cross dress aspect he is comfortable with presenting.  What I find most intriguing here is how his apparel accentuates and diminishes both concepts at one time.  Its as though his appearance shuttles moment by moment across a continuum of sexuality. He is using his clothing choices to make pronounced and emphatic statements about our gender assumptions, and our attitudes about what is correct and appropriate.  Attire as satire and social commentary. Bravo. 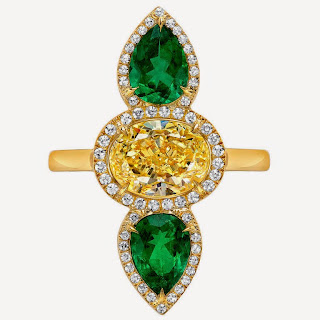 Custom jewelers Tamir produced this piece of dazzle for us to peruse.  Its a roughly 2 carat light yellow diamond, mounted in yellow gold with two pear shaped Colombian emeralds flanking it.  Not much to say about this beyond.  wow.  I admit to a near fatal weakness for emeralds, so there's that. 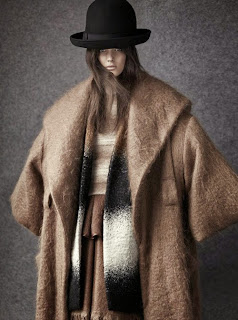 Next in the line up we have this fantastical over-scaled mohair coat and skirt ensemble. I love the massive nature of it, and the sense of grandeur, though its of such a rough hewn looking fabric. Its a wonderful mix of textures that inspire touch, and help to begin the conversation about who this person is and what she is about.  I also love the hat choice, which recalls the Peruvian Andes and helps take this look to another realm entirely. 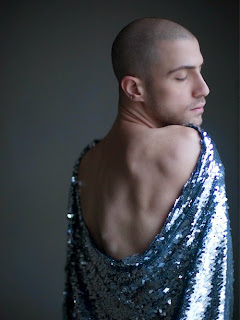 Sensuality is helped along a good deal by textile choice.  Sure this image is meant to be sexy, and inspire desire, but the impact of this would be diminished considerably without the hard shine of the sequined fabric he has about him.  Imagine him swathed in something less dramatic.  How would he look in precisely the same pose, wrapped in burlap, or velvet, or in polyester doubleknit.  Sure, it would still be an image of sensuality, but the final message would be subtly different, and that, my friends, is my point. 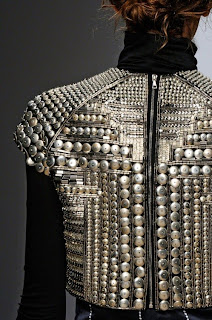 This back closing sleeveless bolero is completely coated with metal sequins and small scale pyramid studs; turning this into a combination of a wildly luxurious garment, and some sort of armor.  It creates a strong juxtaposition, visually, that I find very interesting.  I'd love to have this in my hands to examine.  I want to know the weight of it and how it moves. In addition, musing about who might own and wear such a garment, makes me predisposed to think them, at very least, someone I'd want to meet. 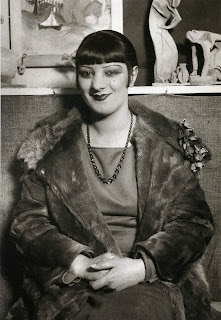 This is Alice Ernestine Prin, more well known as Kiki de Montparnasse.  She was one of the people who helped to not only define, but develop, the free wheeling culture of Paris in the 1920s.  She was a singer, actress, painter and memoirist.  Her unique style, and fierce modernism inspired those around her in many ways, including her longtime companion the surrealist photographer and artist Man Ray. And her look was the beginning point for what became known as the Garconne' style.  It was a somewhat ambiguous look that allowed women to play about in areas of dress previously held by men.  She died, sadly, at 51, probably from her long dependence on drugs and alcohol.  But her influence helped to change the way women thought of themselves, and how men viewed them. 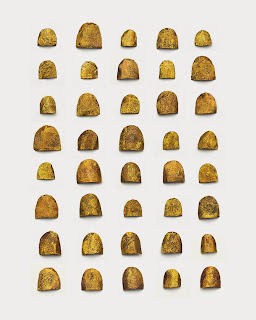 This set of remarkable objects are gold finger and toe covers.  They were found in 1905 in Egypt in the tomb of General Kheper-Re.  Even in death we often call on the language of Attire to transmit information about ourselves, our status, and our dreams for ourselves. 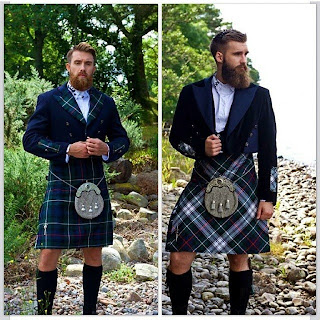 Here are two updated versions of full dress tartan gear.  For myself, I find the one on the left less successful than the right hand one. Perhaps its my modern viewpoint, but the use of the plaid seems overdone, almost costumey, whereas the right hand one seems well balanced.  I also love the fact that the right hand kilt is cut on the bias.  The way that kilt would move would be wonderful, with a good deal more fluid action than typical. 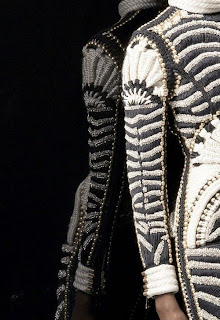 Okay, so when I first saw this image my jaw fell open.  This is tour de force work here.  Taking knitting and crochet techniques and making them do something quite new.  And the introduction of the pearls and beads into it only adds to the level of amazement.  I am sometimes brought to a halt by human ingenuity. 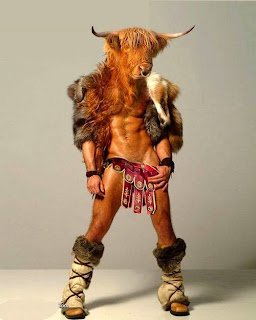 And, as a finale today, this image.  Now you might be thinking, "What the hell?", and to be fair, I have had this image hanging around a while, debating internally about whether it was germane to the discussions here.  Obviously, I've decided that it is.  This is such a wonderful example of our obsession with personal transformation, our desire to leap out of our own skins and into something else's, that I really had to show this.   Now, Its clear that the head of this modern minotaur is photoshopped on, but the resulting image is potently meaningful.  Yes, too, its a frankly sexual image, but that's part of the point.  We seem to have this innate need to revisit our animal selves. Sometimes we do that in subtle ways by wearing leather or fur. And sometimes, like here, we need to take that visitation much, much farther.  It comes as no surprise to me that in this time, when the force of techno-culture is shaping more and more of our daily lives, we are finding ourselves more deeply drawn to this aspect of our inner selves.

And that my friends, is this week's scatter.
Have a Splendid Weekend!