Here we go again, Kiddies. Its time for another wild ride in my funhouse brain. 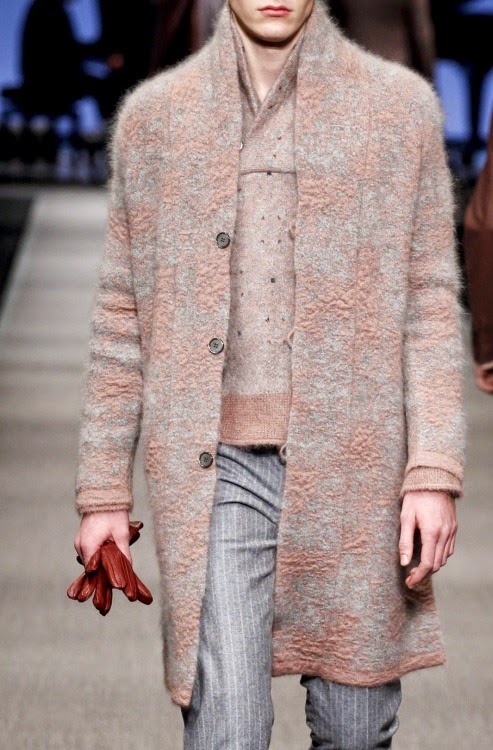 When I came across this image, I have to say my response was instant and unpleasant.  That particular shade of pale pink just took me straight to viscera.  I was reminded of something that had been flayed of its skin.  So, because I like to challenge myself, and I don't like to dismiss things without closer observation, I  made myself look again, and more critically.  My take aways are these:  I actually love the sweater coat and double breasted knitted vest as ideas. I even like the texture a great deal.  The only thing that I find personally disturbing is that color, which by the way, would also be a tough color to pull of for most people.  What's your first response? 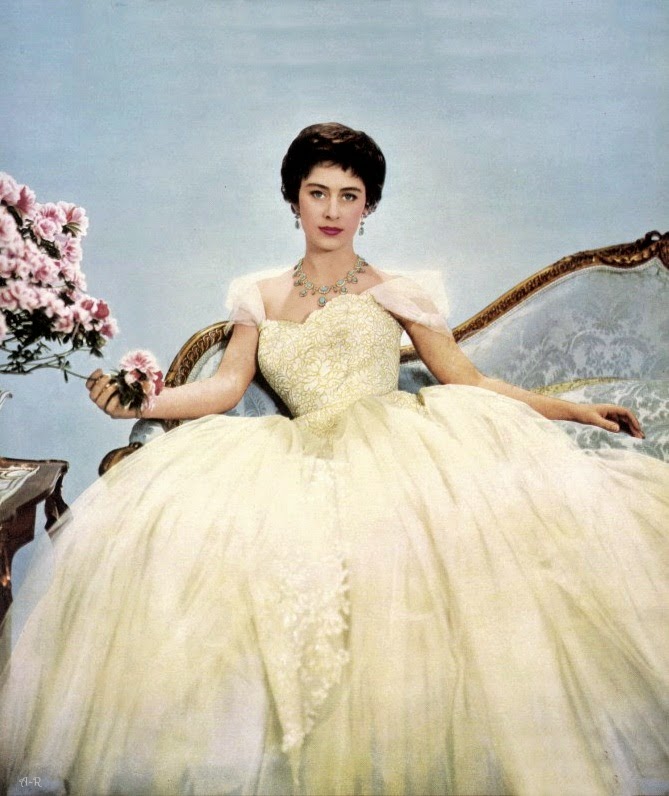 We don't really think much about Princess Margaret, since she was destined from birth to be the also ran in the English Throne Olympics.  But what she had over her sister was a good deal more style.  This image of her in her early 20s shows her giving us her best Liz Taylor look.  Both her hairstyle and her dress are a god deal more on point for the time than her sister Elizabeth tended towards.  I am sure part of that is a matter of knowing what her role was going to be, and she probably was accorded a bit more license since she wasn't destined to rule.  But I was surprised and delighted by this look at the young Margaret. 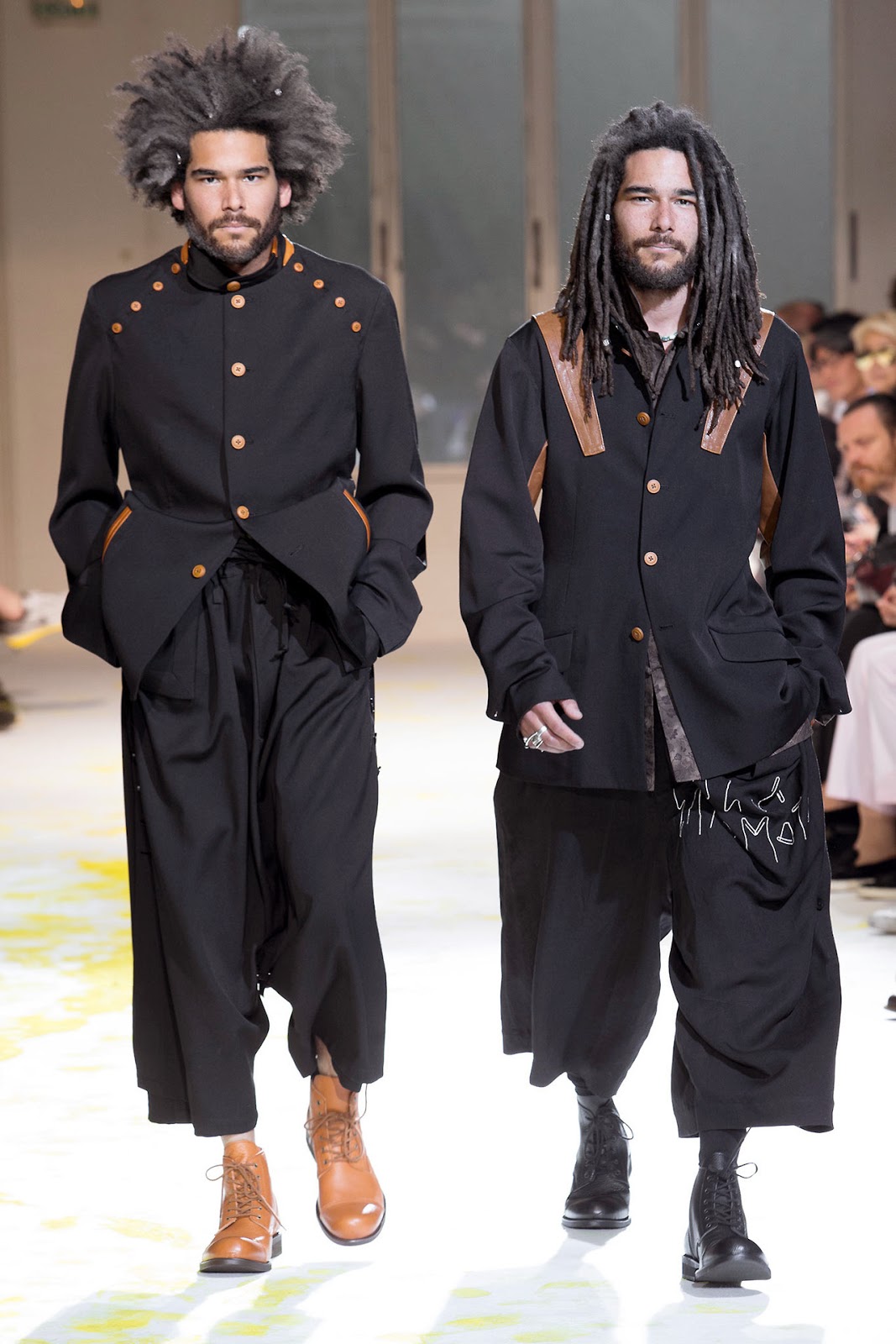 Two menswear looks from the most recent Yohji Yamamoto collection for 2015.  As usual, Mr Yamamoto is largely about stretching our conceptions of proportion, usage and fit.  And for that I will always applaud him.  That he marries those goals to impeccable workmanship makes this even better.  Am I fully on board with these?  Nope.  The pant length is just plain awkward looking to me, hitting at a place that looks almost as if it was a mistake, though I'm sure it wasn't.  I love both of the jackets, with the exception of the deliberately over-long sleeves.  But that's a couture detail that could be easily corrected for real world wear. 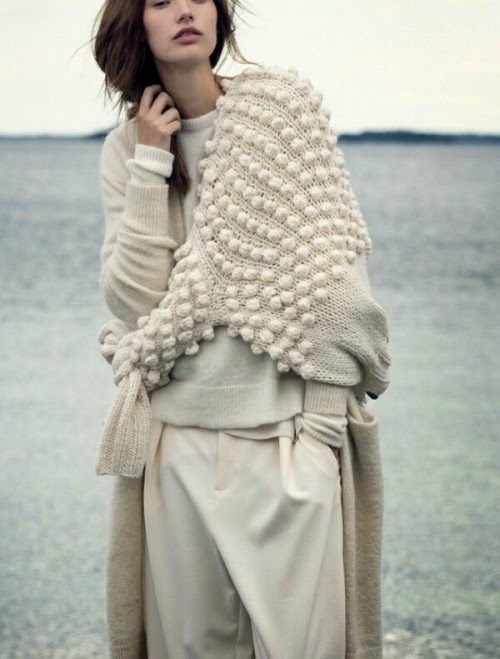 Dressing monochromatically is not only not boring, it can be poetic in the extreme.  Allowing shape and texture to do all the talking can be a visual delight, and surprisingly sexy in a quiet way.  This ensemble is a feast of texture from smooth to knobby.  And because everything is fitted easily, and has a similar softness of hand, it all falls together to create an observed tone poem.  And the resulting Attire sentence is virtually a short story.  As a side note, dressing in this manner can allow the focus of the eye to travel inevitably to the face; always a good goal. 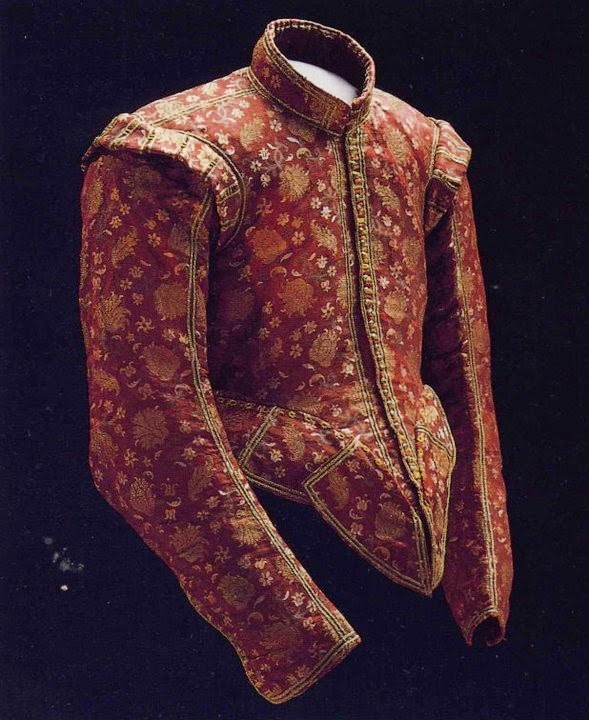 This gentleman's doublet is from the 16th century, around 1560, really.  Its a very fine example of the most common shape of a man's doublet.  It bears all the standard elements.  The red brocade is only lightly trimmed with braiding;  so this would have been something for a gentleman of either upper middle class birth, or perhaps a nobleman of smaller means.  Of particular interest is the cut of the sleeve.  Sleeves were cut very tightly, and so, in order to allow some range of motion the elbow area was cut with some fullness, creating a bit of a point on the back.  Also, the armseye, where the sleeve is attached would be very high and tight. in order to allow motion there, either the sleeve would be left seam would be left open under the arm, or a gusset would be added.  A beautiful piece, from the V&A's considerable collection. 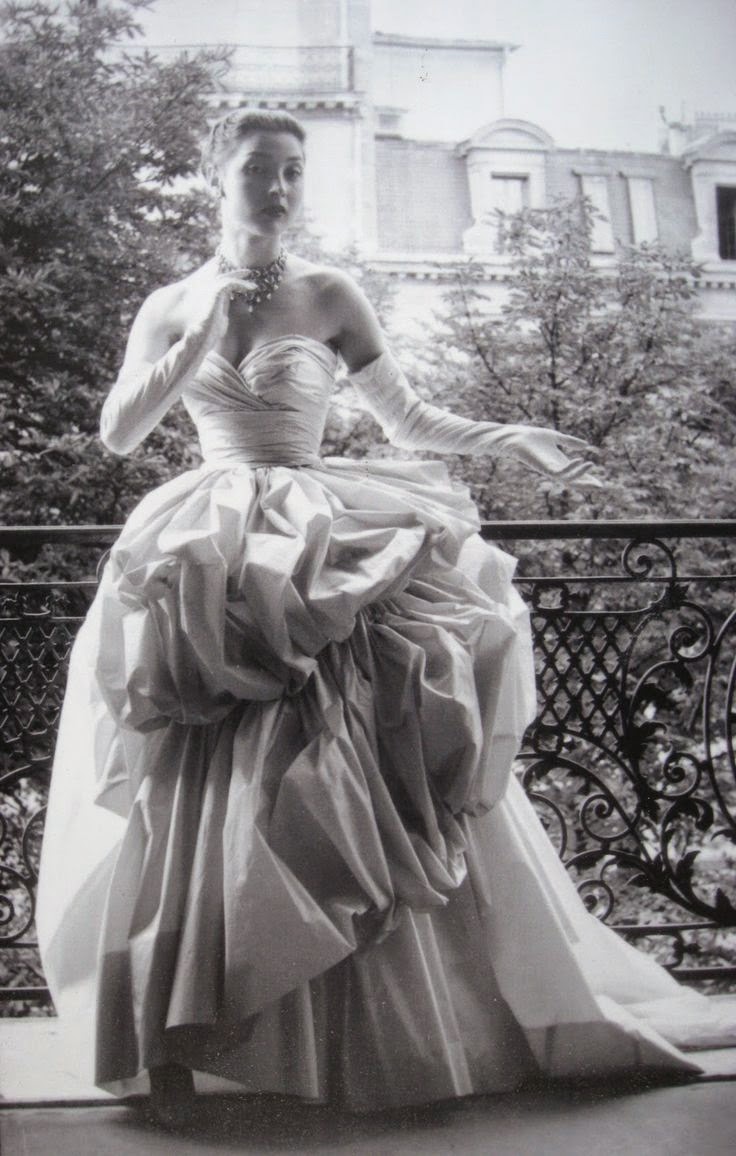 Christian Dior designed this amazing draped ball gown. Its being modeled by house model Asia, who was one of Dior's muses.  I am gobsmacked by the virtuoso draping and gathering involved here. And if you think this isn't so tough looking, just try it sometime. Mr Dior and his atelier workers probably invested dozens of hours in fiddling with the muslin toille of this gown before cutting into the final material.  And of course there are doubtless dozens of tiny tacking stitches, to make quite certain it stays looking like it does here.  A typical ball dress of this sort would require 200 to 500 hours to complete, and the labor of a dozen skilled workers. Add complex beadwork and the hours sail over a 1000, easily. 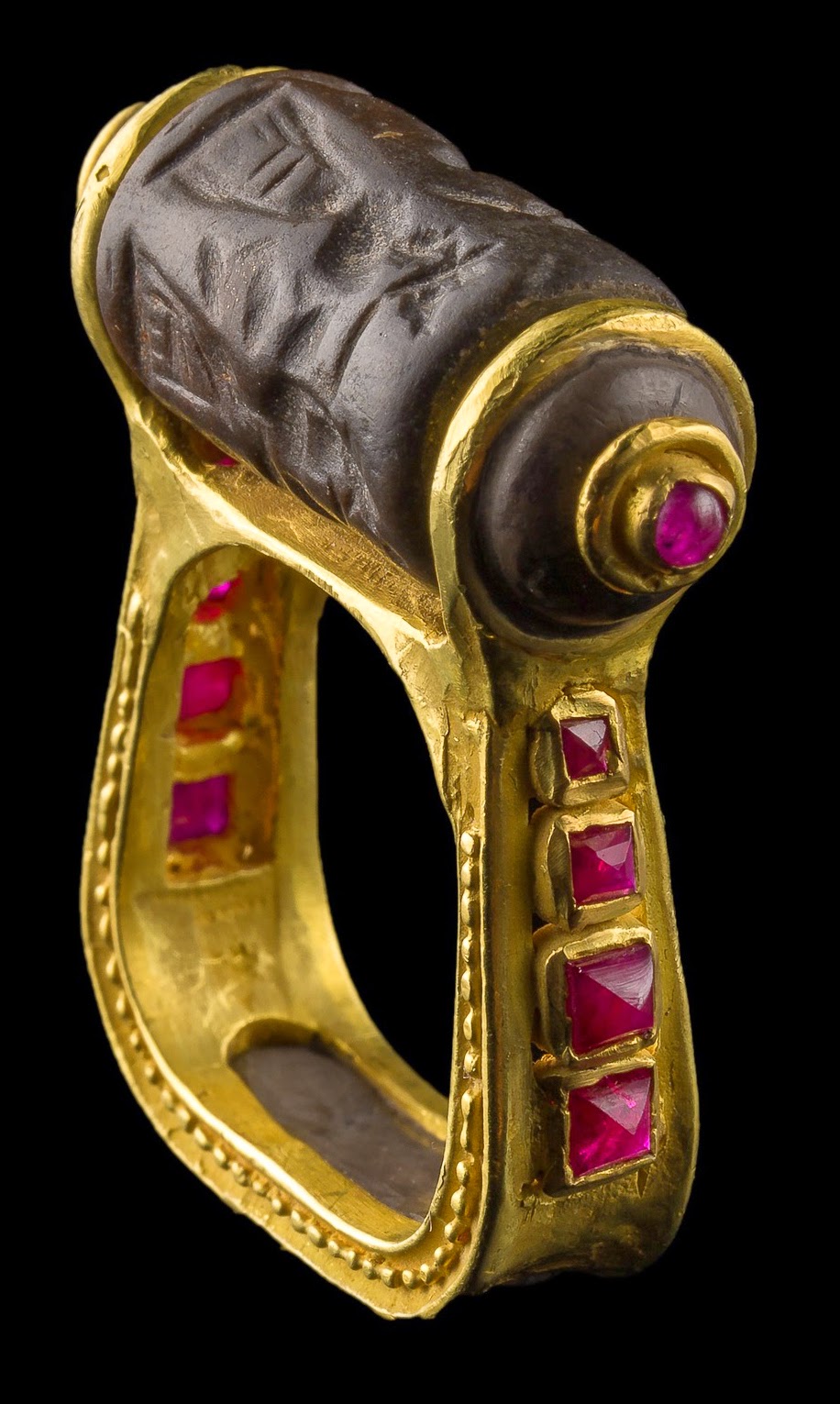 Made of gold and rubies with a clay cylinder, this is a combination rolling seal, and ring.  And wanna take a stab at how old this is?  Try over 5500 years old.  Its from Mesopotamia.  One of the curious things is the facets stones.  Its one of the many things that disappeared from knowledge in the West during the Dark Ages.  The survival of things of this sort leaves me shaking my head in wonder. 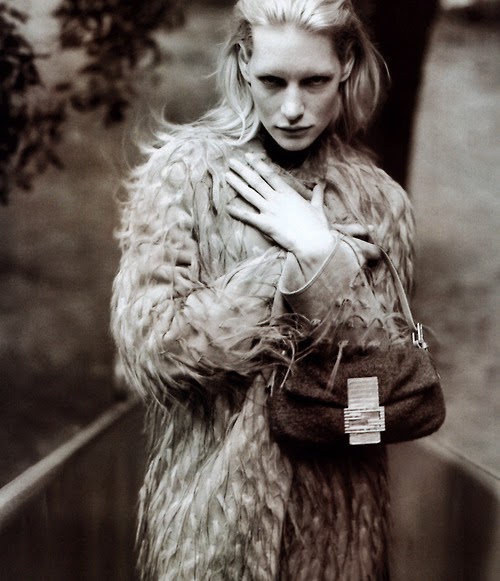 Something I'm really appreciating about the increasing use of robotics and other higher technologies in textile design and manufacture is that there are amazing new textures being devised that could not have existed before.  This fake fur coat is just such a texture.  I love the density of the surface and how it manages to look both soft, and a trifle prickly at the same time. 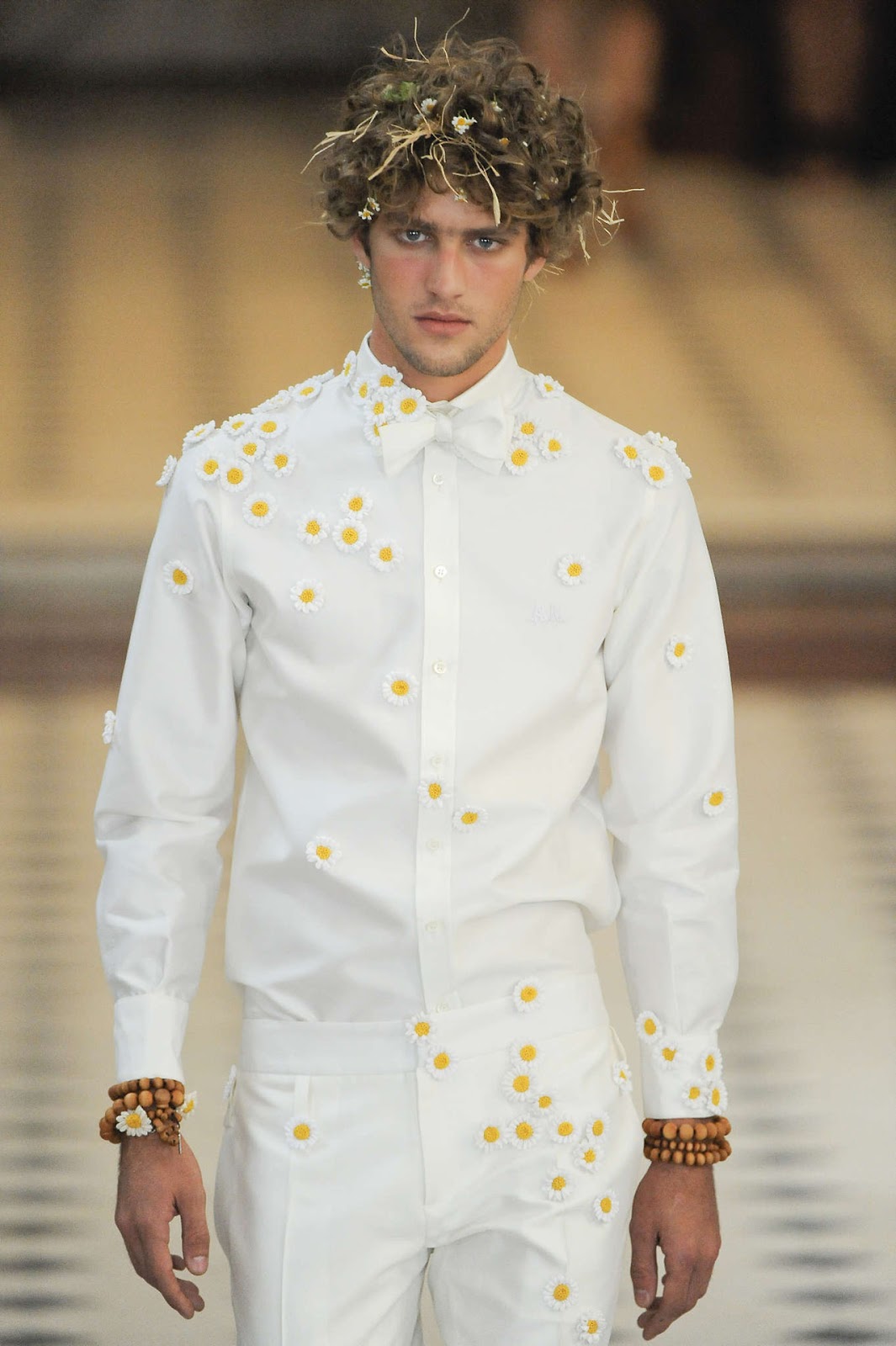 I shake my head occasionally. I do. This is one of those times.  Now, you all know how willing I am to see beyond the normative and to appreciate something that is trying to challenge our conceptions.  This, to me, just looks like a DIY project gone very wrong.  "I know, lets hot glue a bunch of daisies onto a plain white shirt and pants. That'll make it edgy." Uh, nope.  Sorry. Not this time. 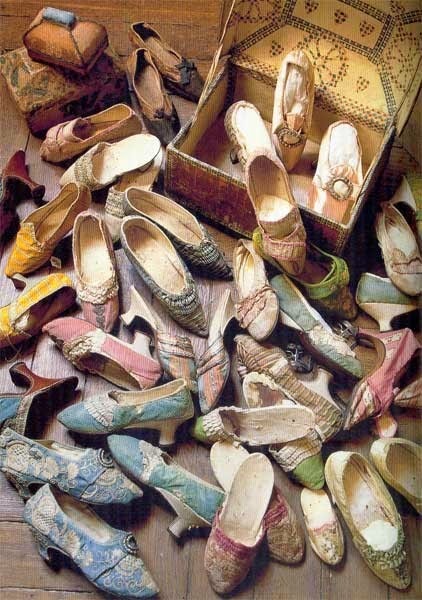 Well, that's this edition of Scatter. I hope you had fun.
Have a Grand Weekend, All.
Posted by Paul G. Ellis at 4:08 AM