Saturday is indeed Scatterday at this house.  So onward I march into the wide world of Attire. Care to come along? 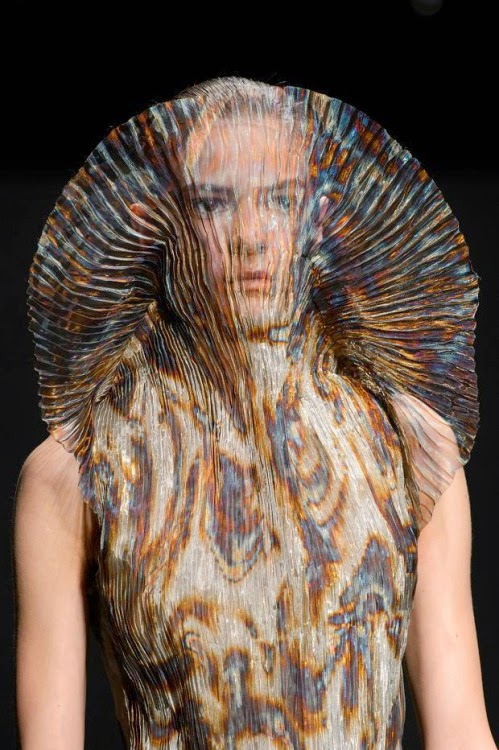 This first image haunted me, right from the start.  It doesn't matter to me in the least that this is an utterly impractical garment.  But it has a eerie, nearly supernatural feel to it that is very appealing.  If you were going to try to evoke a sense of the otherworldly, then something like this would be just the trick.  The aspect of being veiled, obscured and yet dimly visible is also a strong part of its allure to me. And finally, the pattern of the textile gives the whole thing a kind of animation that makes me think that whatever this is she is enfolded in, lives, and protects her. 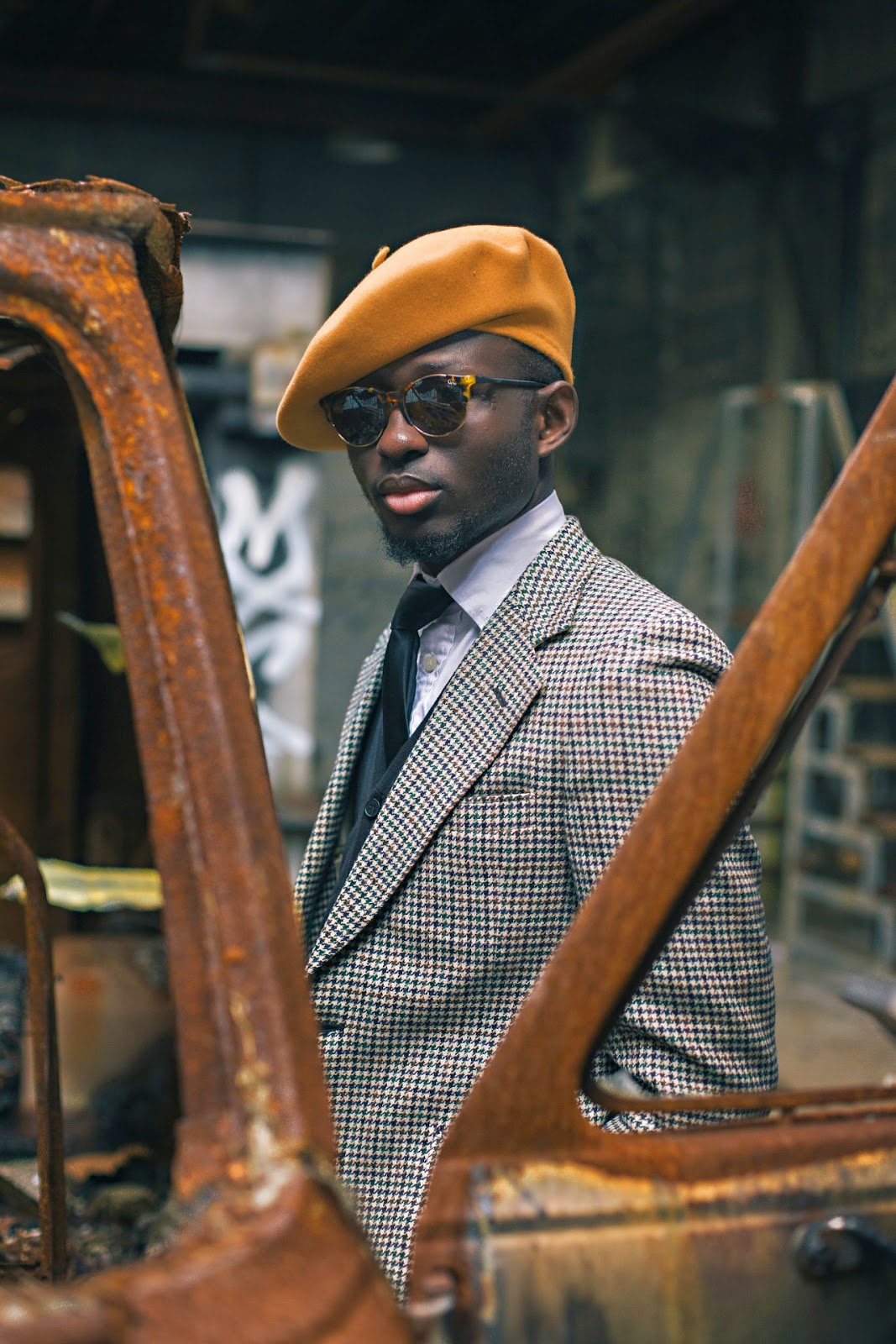 Nothing like a great hat.  And there's a reason why the beret is still around.  Its wonderfully versatile as an Attire word.  The variability of color, positioning and scale, makes a beret something nearly anyone can pull off well.  This grandly scaled one practically calls out to be played with and tried on in numerous ways.  This fellow here?  Well he looks just plain smashing in it.  I think I need to get a beret and see what I can make of it myself. 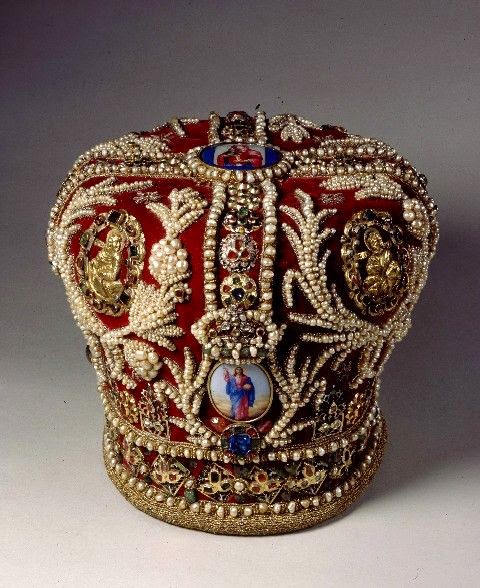 And speaking of headgear, this is one of the lesser known crowns from the Imperial jewels of the Romanov dynasty in Russia.  Its a lesser crown for two reasons, one is that the surface is less heavily jeweled. The second is that the frame is entirely covered with silk velvet, revealing none of the gold base.  Constructed on a red gold frame, the crown has a surface of brilliant red velvet, that has been densely embroidered with thousands of pearls, along with diamonds, rubies and sapphires, plus enameled medallions, and gold bullion work.  With my love of beadwork embroideries, this is a favorite object. 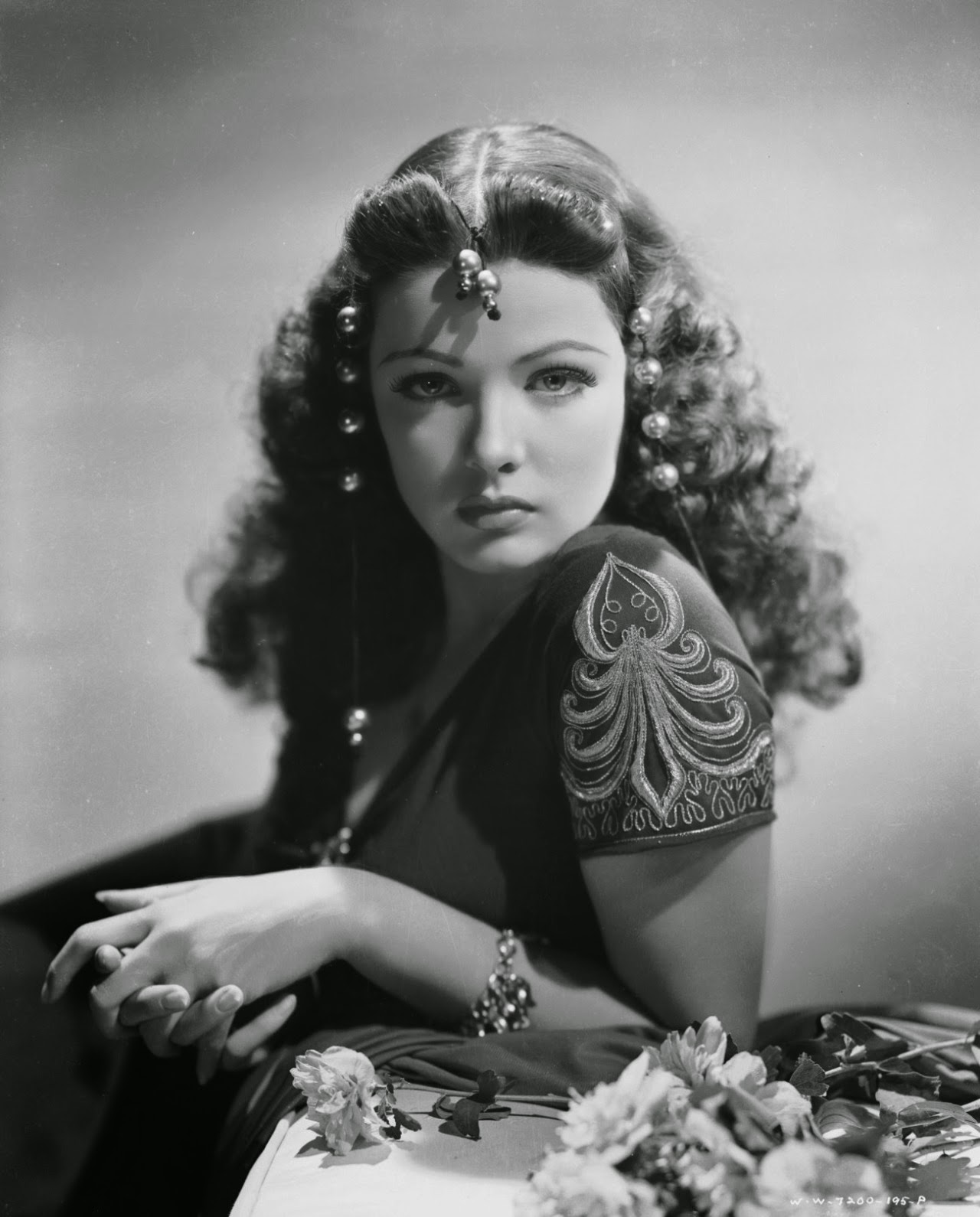 Next we have Miss Gene Tierney costumed for the film Sundown.  Somehow we are to believe that she has been living in the desert in Africa, and she gets enlisted to aid the Allies in defeating the Germans.   Where she got her hair done, and who made her clothes out of rayon crepe in the Sahara is anyone's guess.  And of course, what she has on has little if anything to do with the cultures of the African continent, and everything to do with Hollywood's notions of what exotic women should look like. 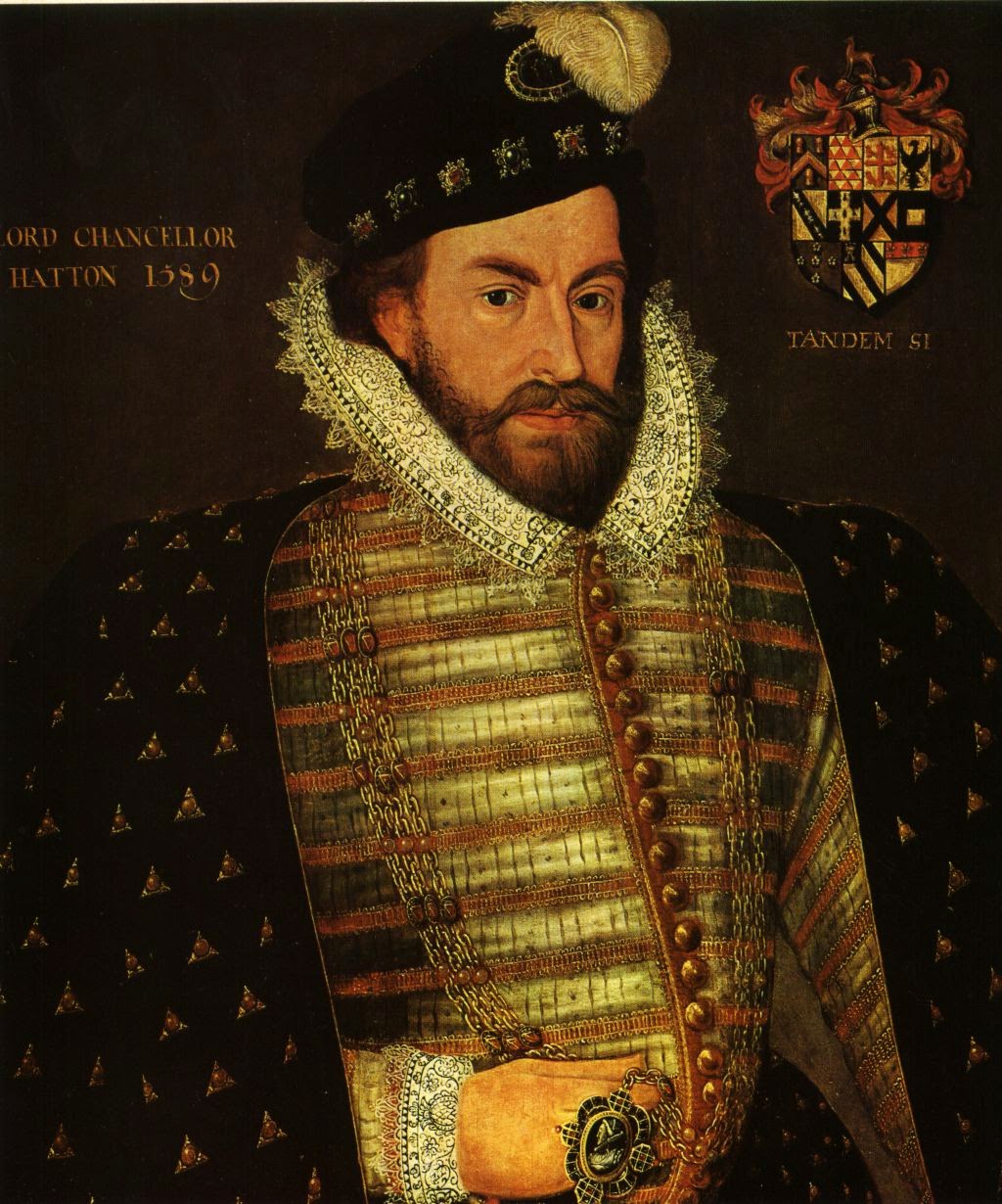 This gentleman is Sir Christopher Hatton, who was lord Chancellor of England in 1589, when this portrait was painted.  He was a notable dandy, and a long favorite of Elizabeth I.  This painting, done 2 years before his death, is virtually a classroom sample of what a stylishly dressed upper class man would have looked like in England at that time.  Peascod bellied doublet, extravagant blackwork embroidered, lace trimmed collar and cuffs, jeweled chain of office, headband with jewels, and ostrich plume, and of course, the requisite cloak, in this case evenly coated with even more jewels: yep, its all in place, and exactly as it should be to be up to the moment stylish. 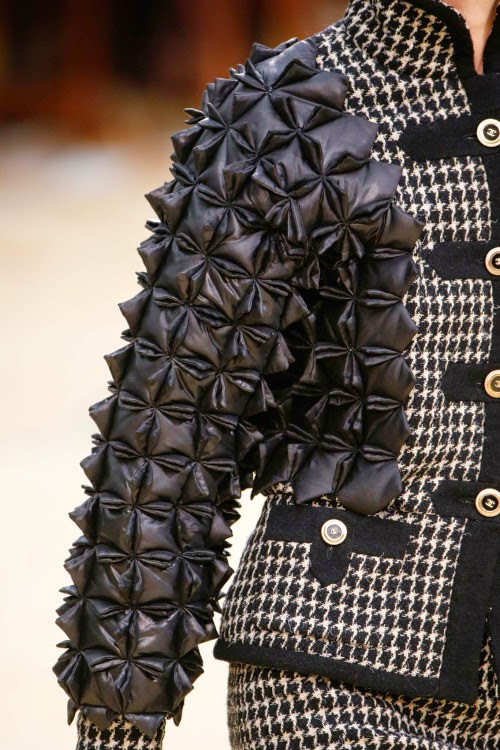 Karl Lagerfeld of Chanel has been playing with the classic Chanel suit since the beginning of his tenancy as head designer there.  This is a particularly interesting update, to my mind.  And I'm fascinated by the origami like leather bolero that is overlaying the more traditional suit structure.  The texture is amazing, and it gives the suit a whole other expressive dimension.  I'm tempted to play with this technique and see what comes of it.  And finally, the juxtaposition of texture is intriguing to me, along with the rhythm of the bolero, which mirrors the rhythm of the houndstooth check.  Uncle Karl, you done good! 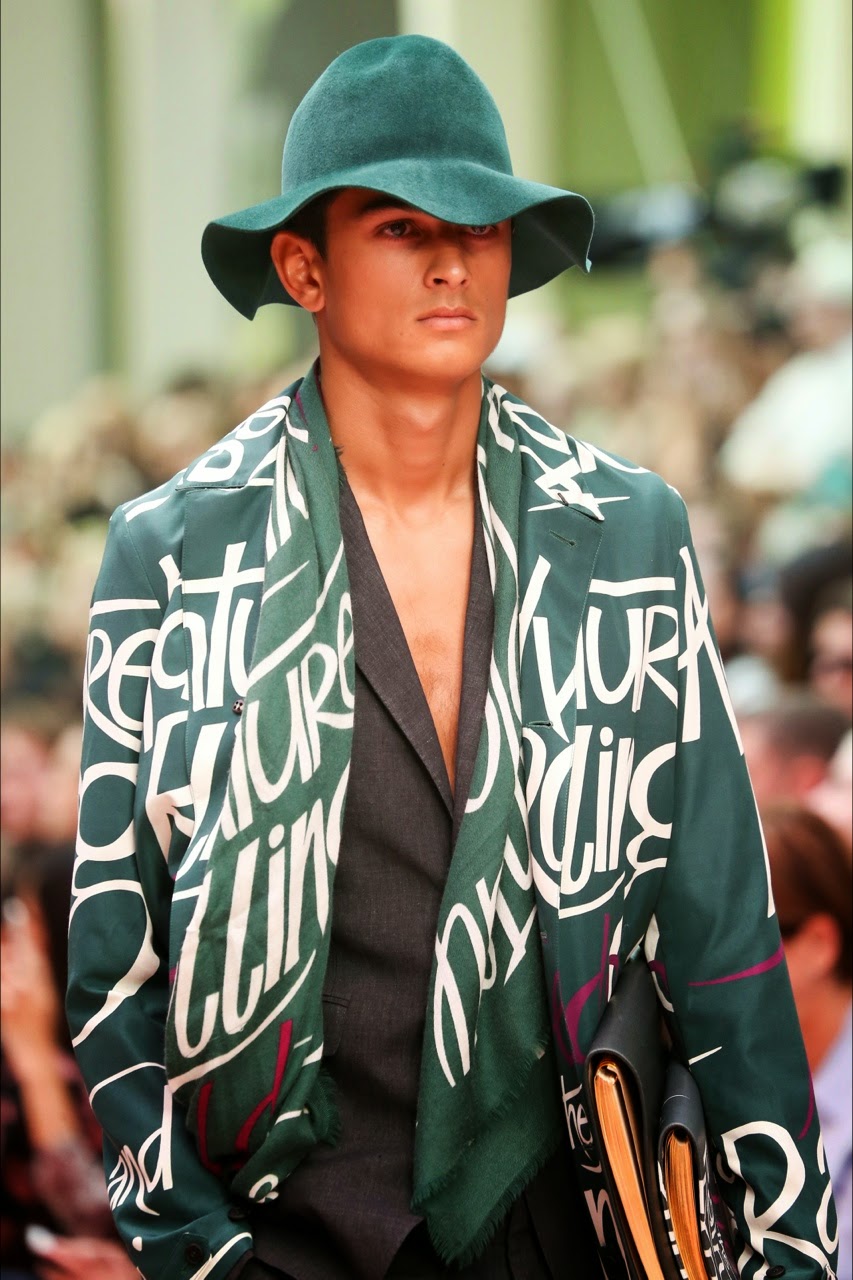 I will be honest, I find clothes with words all over them annoying.  There I said it.  This effort from Burberry Prorsum is no exception.  I like both the color and the soft, loose structure of the coat. I like the matching scarf.  I even kinda like the sugarloaf hat.  I don't like the words, even though I can't tell what is being said.  What I dislike about words on clothes is that it diminishes, and re-directs the power of expression away from the garment, and onto the text.  Essentially the person becomes a mobile billboard for whatever is stated on their clothes.  As well, because that statement never alters, mixing such clothes with other things, cannot help but alter whatever sort of message one is trying to convey, since you cannot escape the verbiage.  This is why you are unlikely to see me ever wearing anything with text on it.  Harumph. Rant over, for now. This image made me smile a good deal.  As a person who has always had to struggle with issues around weight, it pleases me no end that FINALLY some designers are acknowledging that women are not all size 2, nor do they all wish to be.  And these same women desire to look stylish, attractive, and sexy, just like most people do.  But the most important thing for me here, really, in the context of this blog, is that it doesn't matter what shape you body is, as long as your clothing is tailored to you properly, you can wear whatever you want. 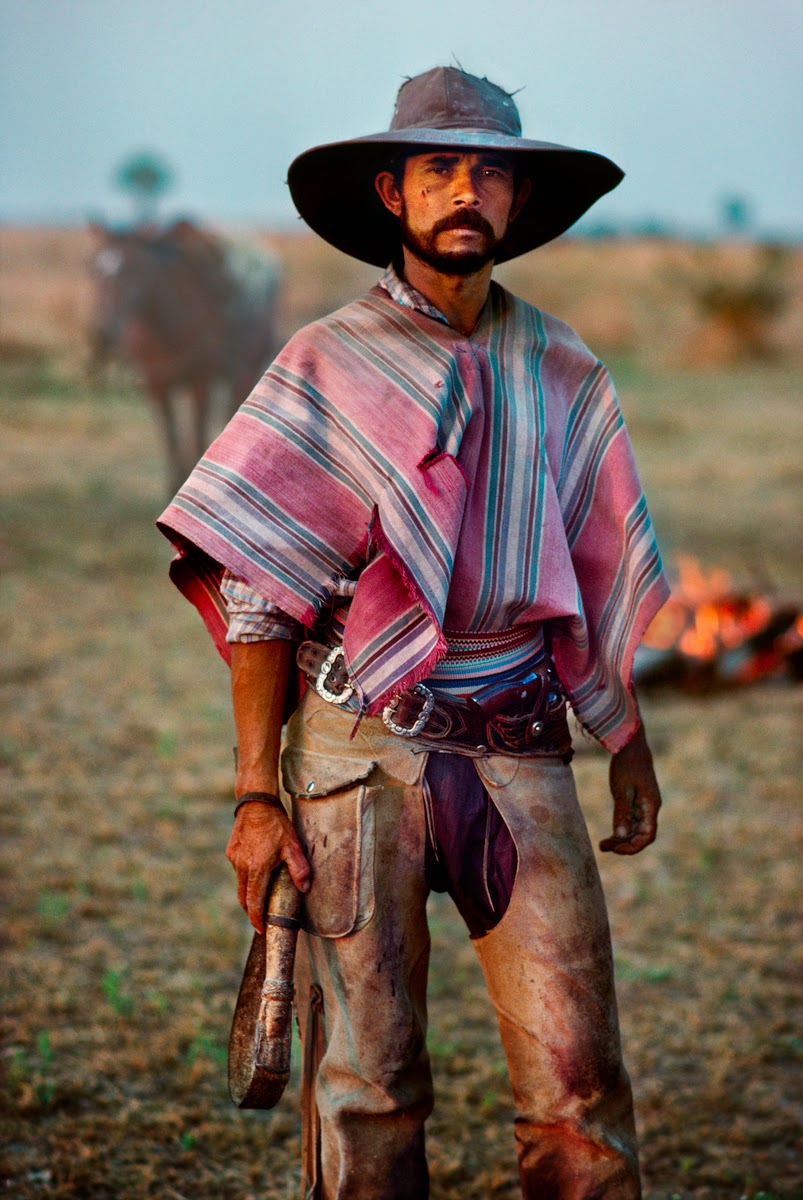 Dressed for work, this gaucho is still expressing a great deal beyond the simple need to do a hard job in relative comfort.  I'm sure that notions of color, proportion and accessory never for a moment entered his head.  but even if that's so, the statement presented is a completely readable, intelligible one.  My point here is that even when we don't mean to consciously, we speak the language of Attire.  And sometimes as here, with a kind of elegance. Yohji Yamamoto is one of my pantheon of design gods.  This image gives you a sample of why.  His genius, to me, lies in his willingness to shatter accepted structures.  This dress, though it appears to be simply a swath of material draped around the body, is in fact very carefully constructed to give that impression, while also retaining its shape effortlessly.  For me, this ability to create the sense of effortlessness is one of the most difficult things to achieve.  It requires a full understanding of body shape and movement through space, plus a master level understanding of construction. and materials. 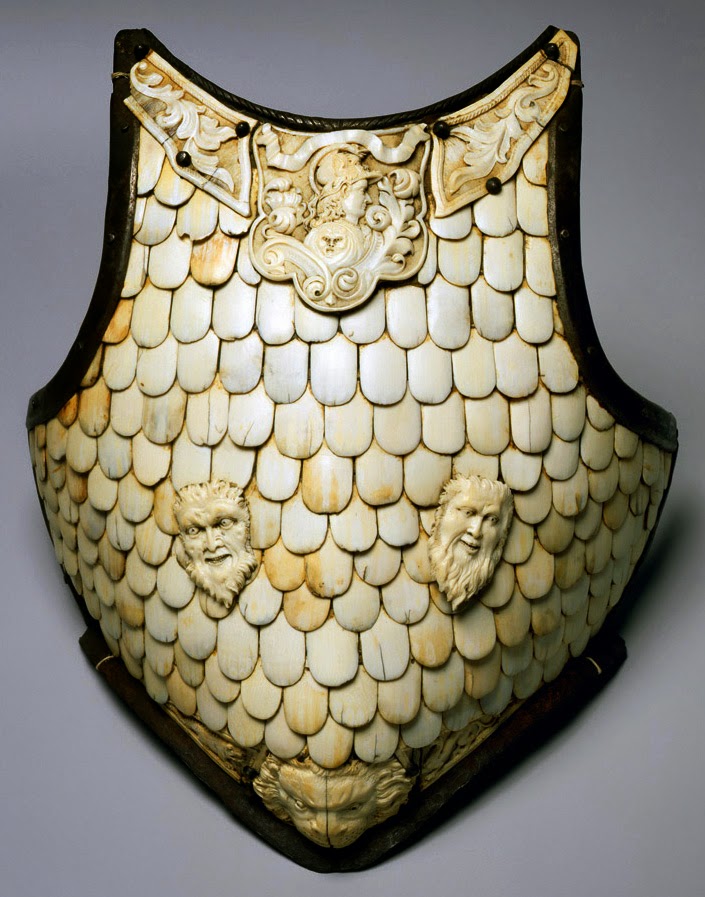 This gorgeous object is an ivory plated cuirass that was part of a suit of parade armor, made in Italy in the late 16th century. Sadly, I've been unable to find out who wore this amazing thing.  But just imagine the fellow, gleamingly white on his horse.  It would have been a remarkable sight to the people watching him pass.   Though the idea of harvesting ivory is more than a bit repellent now, before we knew any better, this would've been a wildly lavish piece of armor, possibly costing more than something made in silver. This is one serious head scratcher that I'm finishing up with today.  I fully understand how fetishized footwear has become, and that the notions of practicality or comfort are often abandoned in favor of style and presence.  This is more than just one bridge too far, this may be all the bridges at once.  Poured acrylic platform soles designed to look like a geode piece of quartzite, bound round with straps, and a gray leather netting.  Where, when, or why would anyone choose this?  Admittedly these were no doubt made for a runway show.  But nonetheless, these really concern me, for what they communicate.  When are we going to get past the need to restrict women in their movement?

Well, that's this week's ramble. Have a grand weekend All!
Posted by Paul G. Ellis at 8:44 AM