Wow.  50 of these posts.  I'm kinda stunned my own self.  But I just keep finding more strange, lovely and wonderful things I feel compelled to share.  So without delay, here we go! 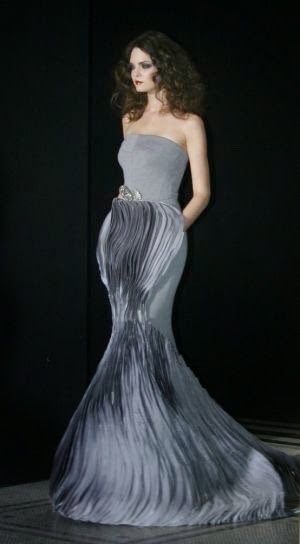 In 2012 Stephane Rolland designed this sinuous evening dress of gray silk.  In general shape its a now standard mermaid dress.  What gives it a special sensibility are those dozens of curving panels of silk moving up the body, and no doubt shifting beautifully when in motion.  Sometimes its the application of something that will become kinetic to a garment that makes it hard to ignore.  Even though this dress is a mid tone gray, the person wearing it would be capable of drawing much attention. 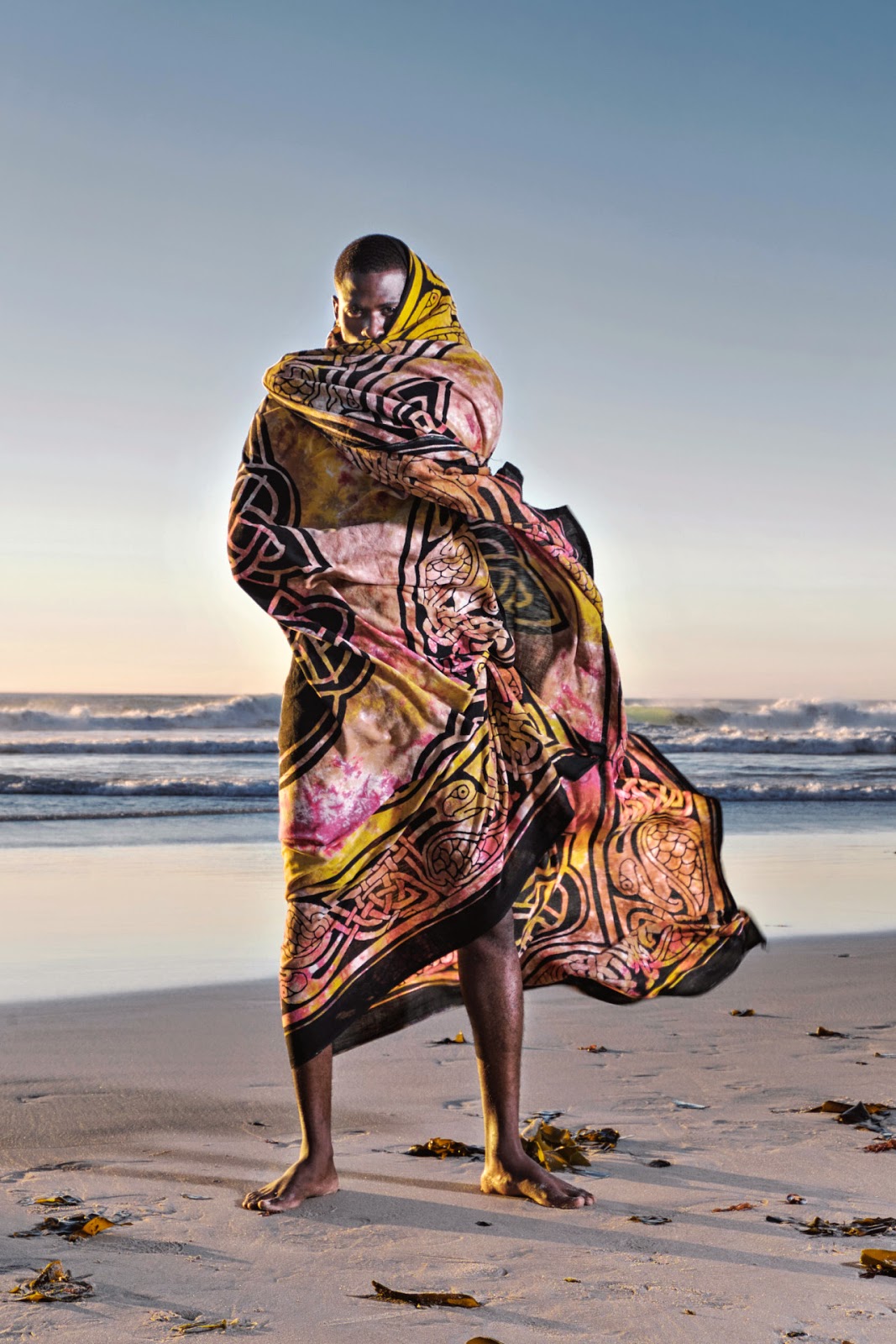 Fabric in motion.  Its sensual, powerful, potentially expressive of a huge range of emotion.  For me, textiles are one of the great things we have created.  They permeate every part of our culture at all levels.  And even, as in this case, its simply a patterned piece of cloth blowing around a body, the microsecond of beauty captured, is breathtaking.  I find, in the breadth of fabric types and endless array of things to be explored, expressed and shared. This is only one of them.  I am routinely inspired.

In 1920, this golden yellow rayon dressing gown was made, with appliques of silk crepe, and silk taffeta in a huge, abstracted design of roses.  The sleeves and hem are trimmed with multiple rows of maribou.  The lucky lady who owned and wore this must have felt quite like a femme fatale in this.  It really makes me sad, when I see things of this sort, that we no longer bother to make ourselves feel special in this way anymore.  What a wonderful gift to give yourself, to be able to slip into something this delicious when you get home from work. 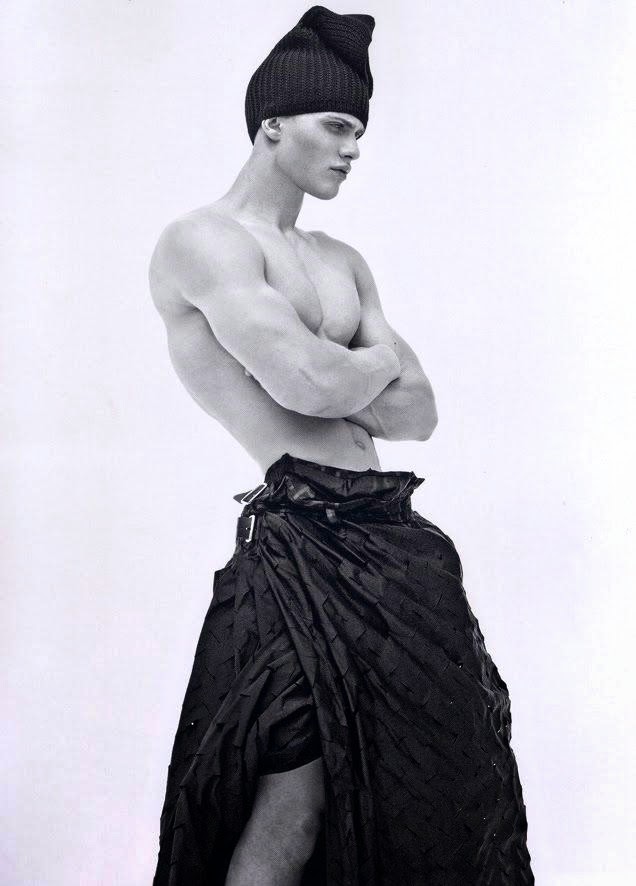 Me and my man skirt thing. I know, I know.  I can't seem to help myself.  This image comes from a  German fashion magazine editorial called Keine Kompromisse.  What is appealing to me here, apart from that rather distracting young man is that this man skirt owes nothing to kilts or to sarongs.  Its a different thing entirely.  The way its draped recalls women's skirts of the later 19th century, and the fabric is regularly slashed in the manner of clothing of the Renaissance.  I would love to see this in motion.  It also brings up a memory for me.  When I was in my 20s, and had begun to amass a collection of antique clothes for study and use, I had bought a gray taffeta skirt and bustle from the. 1890s.  The fabric was still quite sturdy, and because I am who I am, I tried it on. It fit!  I have to admit that I loved the feel of both freedom from pants, and the kind of grandeur of the trained skirt, with its distinctive taffeta rustle. 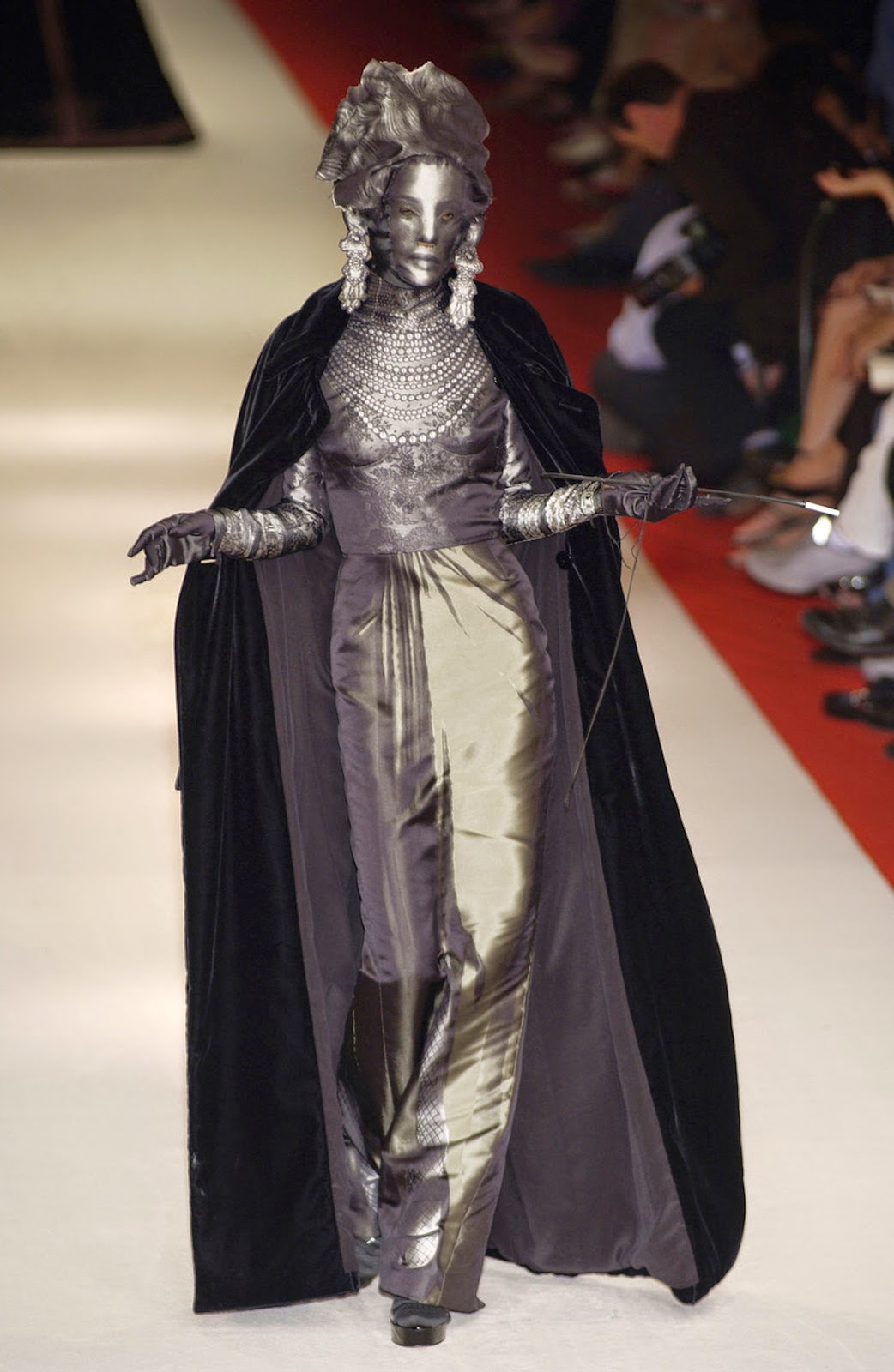 Oh Mr Gaultier, what have you gotten up to?  Actually, this is from one of his 2002 collections, but its still an envelope pusher.  The ghostly coloration, the masked face, the black cape, put this in some strange world where people have shifting reality and things transform at will.  But part of what I admire so very much about Gaultier is that no matter how out there he gets, he never forgets that things need to be beautiful.  This is a deeply compelling look.  And minus the mask/hood thingy, quite wearable. 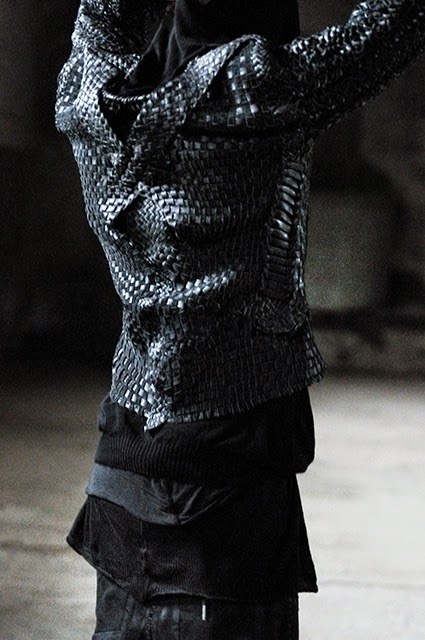 This reptilian looking jacket is by menswear designer Boris Bidjan Saberi.  I love the texture of it.  Its snake-like, and really sexy looking, in a dark danger sort of way.  And also, though its difficult to see clearly here, the back is cut to deliberately create sharp lumps, and ridges, that enhance that sense of being a reptile.  Edgy, pushy, and hot. 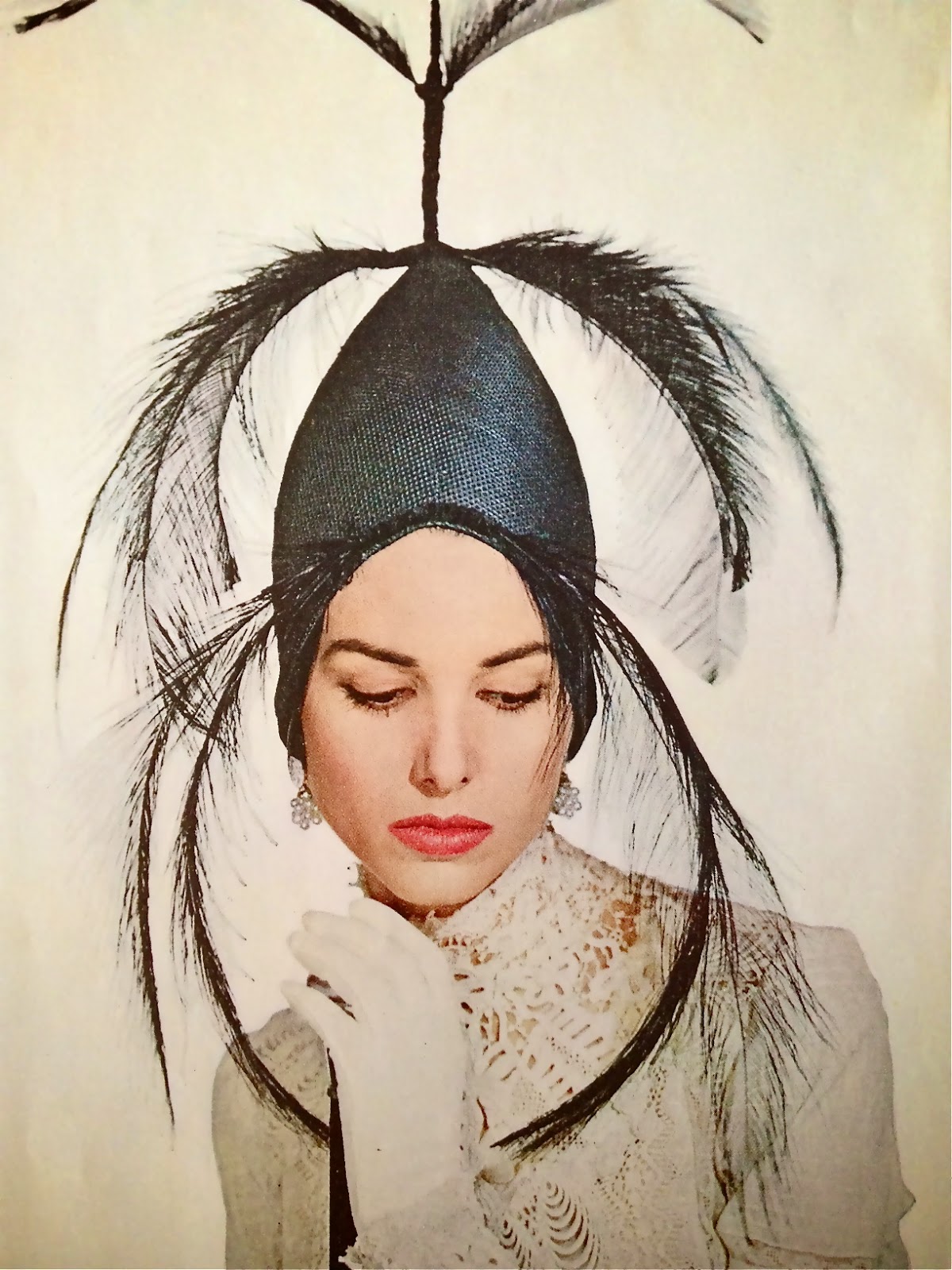 I have always loved the Ascot races sequence from My Fair Lady, and I have a lot of respect for Cecil Beaton as a designer.  There are, however, times when he does make me wonder.  This hat, worn by one of the extras in that sequence is just such a sartorial WTH for me.  It owes very little, if anything to the time its meant to be a part of, and the proportions are really odd.  Its hardly the only one of his millinery fantasias from that sequence to be out of time, but for me, tis the one I find least appealing. 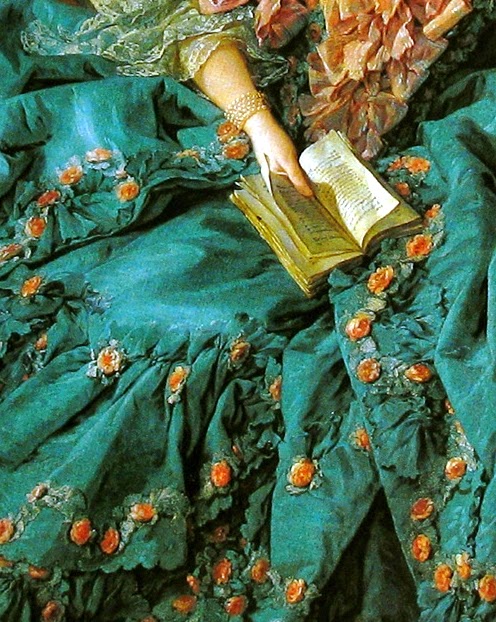 In 1756 Francois Boucher painted one of the number of portraits done of Madame de Pompadour.  This detail image from that painting shows the abundant detailing, and oddly light feeling of her Robe ala Francaise.  It was the fashion at the time that the trimmings of a dress should look as though they had simply landed on it, rather than looking tightly affixed.  The twining lines of silk roses and fly fringe on the vast ruffles appear to have simply been laid in place, and the echelle of ribbon bows on her stomacher look ready to fly away.  Madame was known to not only have been quite political, aiding Louis XV in matters of state, but also was accepted to have extraordinary good taste.  This is one of my favorite paintings of her, and a wonderful sample of the taste she had. 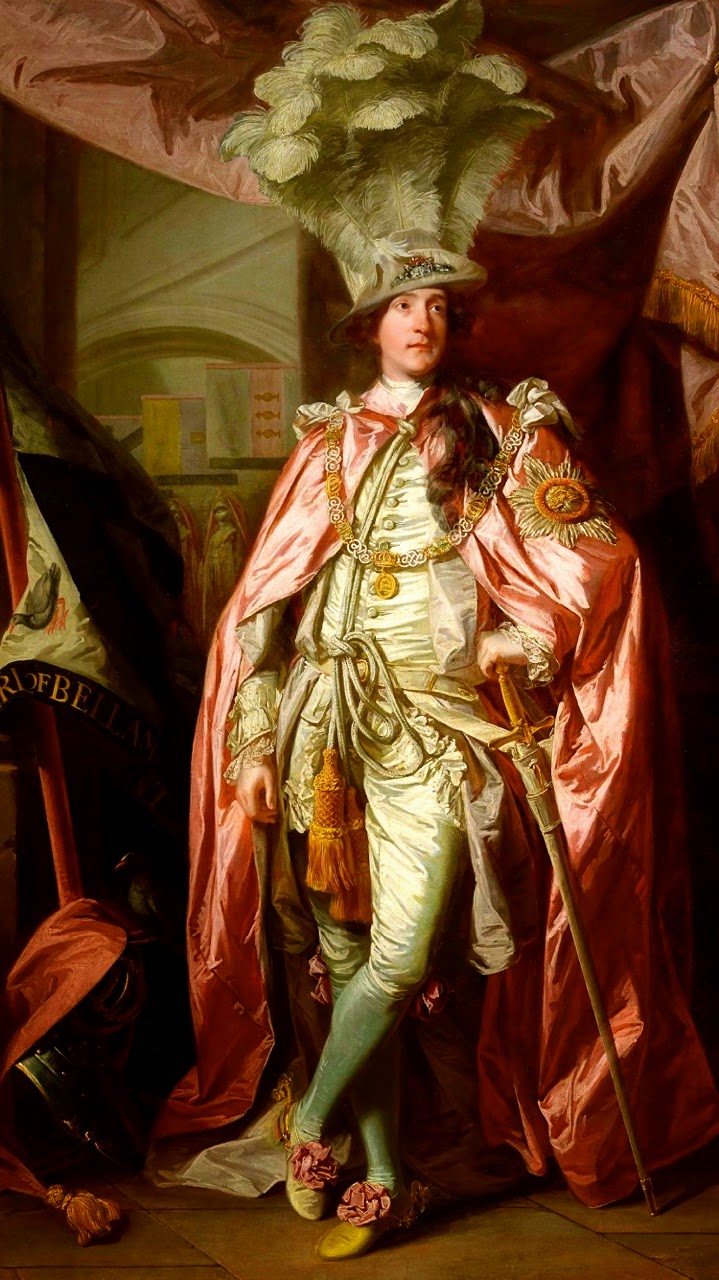 Dipping into portraiture again, this time its Sir Joshua Reynolds and his portrait of Charles Coote, 1st Earl of Bellomont on the occasion of his elevation to the Earldom, about 1767.  To our eyes his clothing is absurd, particularly the hat with those enormous ostrich plumes, but a great deal of what you are seeing is apparel that was regulation for such a ceremony.  The cloak, with its order badge, the huge tassels, the necklace of office, all were required to be worn.  But that hat is purely an arrogant display of wealth and power.  It was not part of the required attire of a noble to wear so many, or such large plumes, nor was the fan arrangement a requirement.  Clearly mister man here had no problem with making very sure people understood who was important in the room. 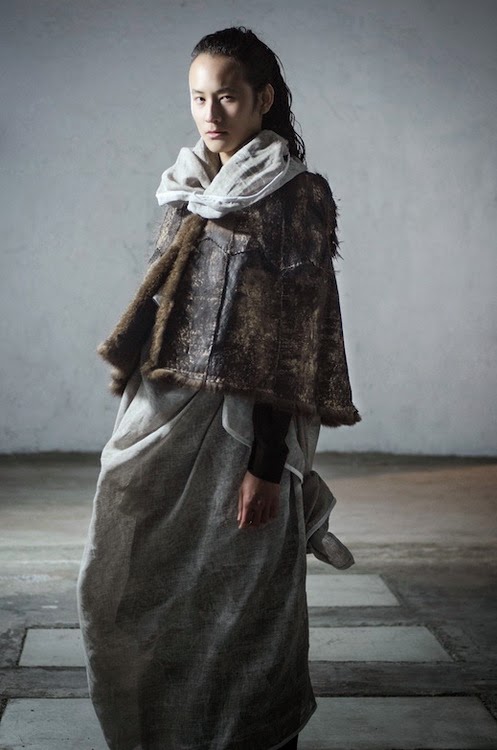 I've written before about our current fascination with intentional distress and wear in clothing.  This is a wonderful sample of that in action.  Everything about this is carefully crafted to look like its seen much, and hard, use.  What does this penchant from visual dissolution tell us about ourselves?  Its a question I've asked myself before, and I don't think I've sussed it out fully. Doubtless there are many reasons, as there always are for human motivations.  But it seems that this means something important, that we aren't fully voicing about ourselves. 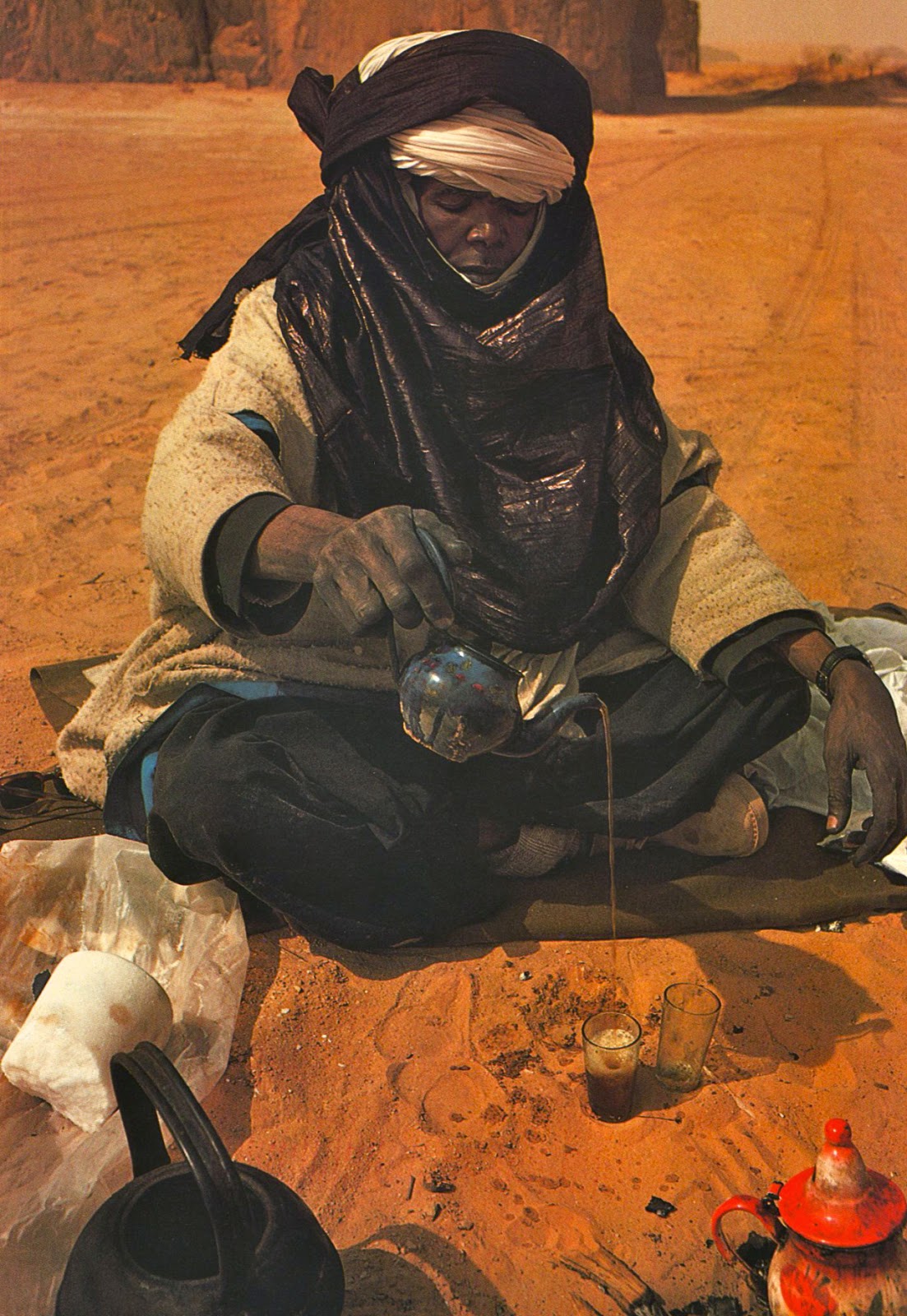 Slow and steady, western modernity reaches into the farther flung parts of of the globe, as we become inch by inch a more truly global culture.  Looking at this image without much care you'd think you were seeing a man in traditional attire, making coffee.  Looking closer you can see that he has modern, western styled boots on, and a wristwatch.  In and of themselves these are hardly remarkable things.  They are only relevant in that they show us how much and how far Attire ideas spread. 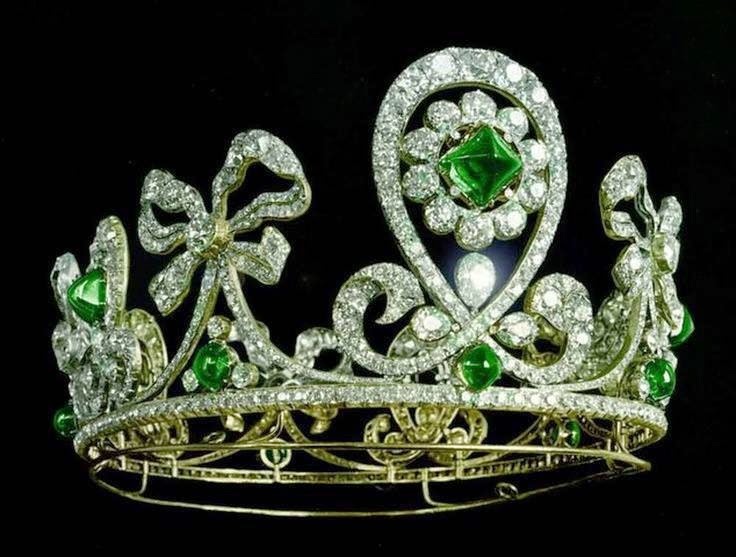 For the final entry today, a piece of dazzling bling to celebrate the 50th Scatter post.  Tsarina Alexandra Feodorovna wore this glorious bit of dazzle.  With a yellow gold frame, over 300 diamonds, and a series of pyramid, and cabochon cut emeralds, the Emerald Bow tiara was and is a remarkable piece of jewelry craft.  Not much more to say except if anyone wants to give me a big herkin' emerald, I wouldn't say no.
So that's it for the 50th edition of Scatter from the mind of Attire.  Have a grand weekend Everyone!
Posted by Paul G. Ellis at 6:28 AM