The wheel keeps turning, and so we find ourselves back at Scattertime again!
Yep, Its been a whole week, so lets get cracking. 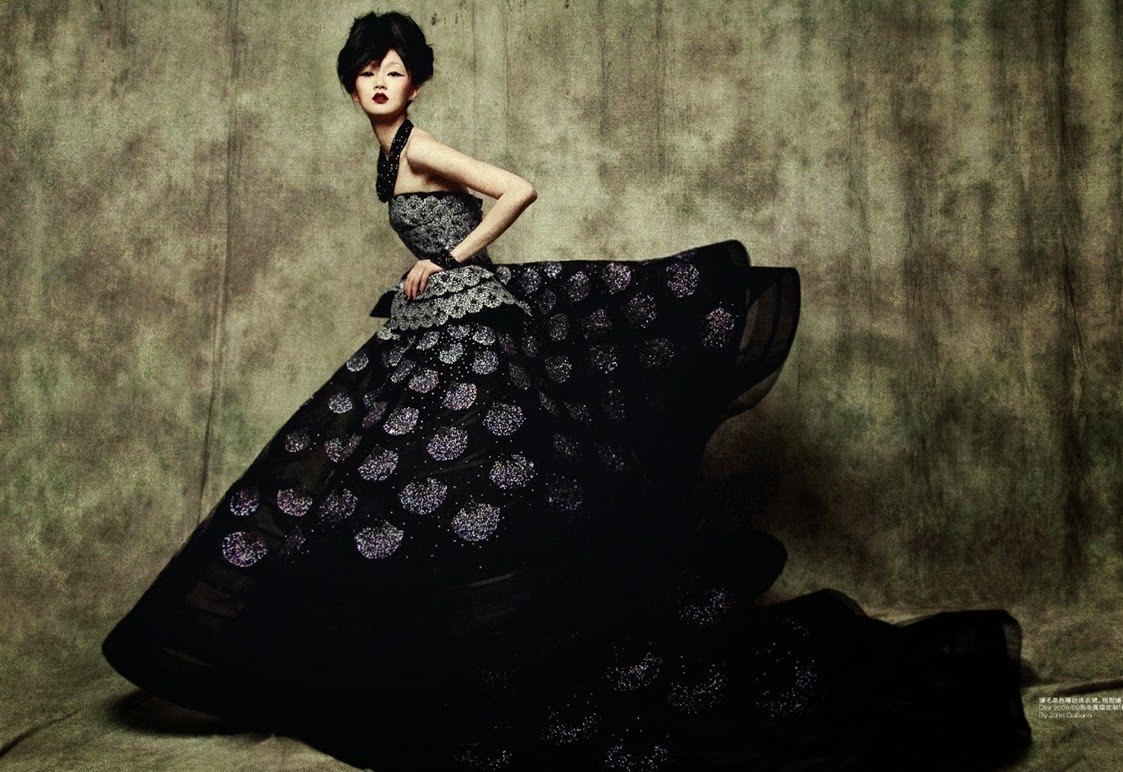 One of the responsibilities, and glories of the couture is the stretching of structural limitations.  Designers have the resources, and the staff skills to take their most extraordinary fantasies, and fulfill them in 3D.   This John Galliano dress is from his tenancy at Dior, and in fact was inspired by a dress that Christian Dior did in the 50s.  But what Galliano did was explode the idea outwards, making what was already a ball dress in Christain Dior's hands into something grand opera in feel.  Suddenly this is a garment to be worn by the tragic heroine's nemesis.  I will always appreciate Mr Galliano's unspeakably huge talents for design.  Breathtaking. 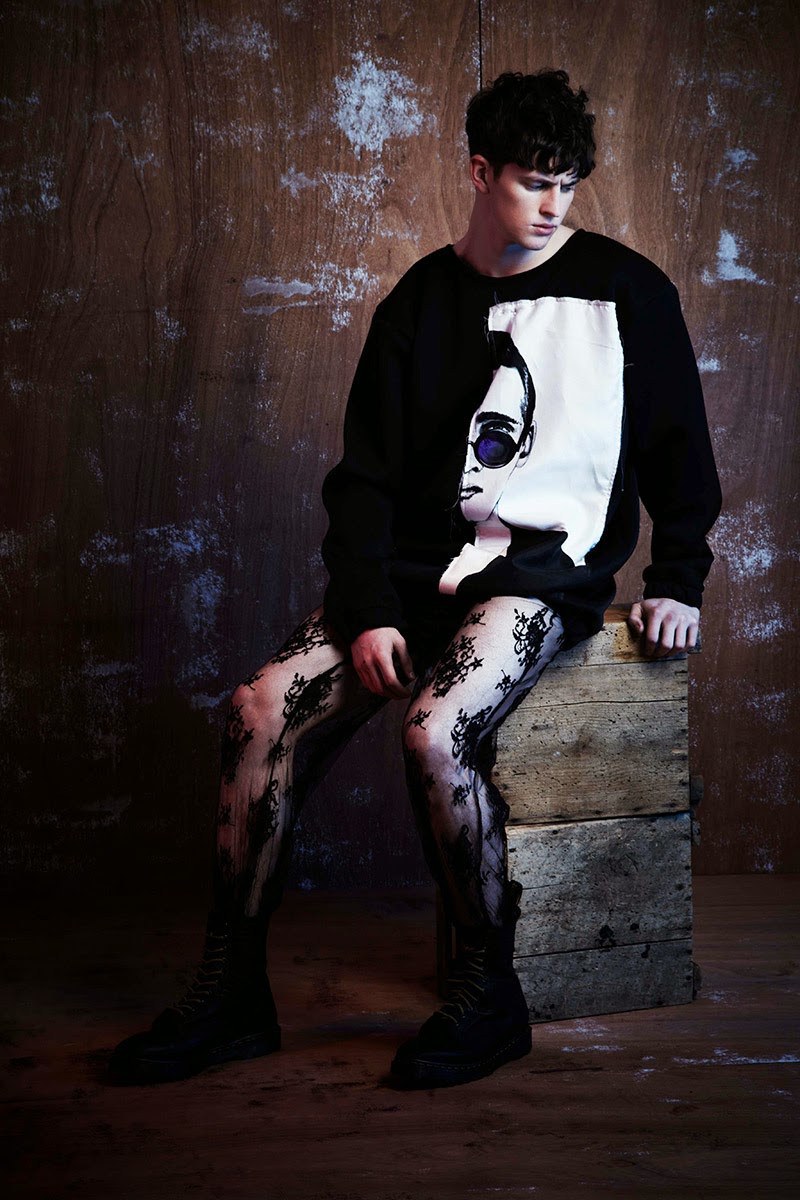 Stockings for men?  Why not, say I?  Patterned stockings for men?  Sure, what the hell.  Who am I to decide?  Now I will say that for the most part I find patterned stockings unappealing because they so often make a person's legs look like there's some awful skin problem going on, so, even if such a fashion were to catch on for men, I'm unlikely to go there my own good self.  But as another of those challenges to what is and is not okay for men to wear, I still say, why not?  This effort is from Joseph Turvey, F/W 2015.  And I do wonder where you're going to be wearing these in winter, jus' sayin'. 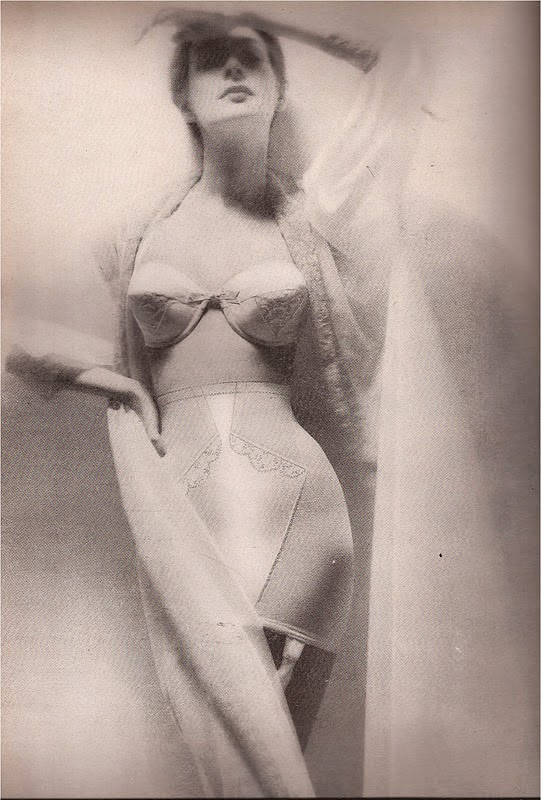 One of the most appalling, to me, anyway, things that have been done to women routinely for centuries is the physical manipulation of their body shape.  This image is of a Lily of France bra and girdle set from 1954, shown in Harper's Bazaar.  The part that really mystifies me is that whole nosecone shaped breast thing that was all the rage then.  It had nothing whatever to do with how a woman is shaped, and it must've been damned uncomfortable.  Then  again, the 1950's will hardly be remembered as a decade devoted to anything natural.  As well, the nasty notion of showing such support garments on lithe young things for whom gravity is still an alien idea, only makes it harder for everyone else to feel good about themselves.  Not new, I know.  Still, it infuriates me. 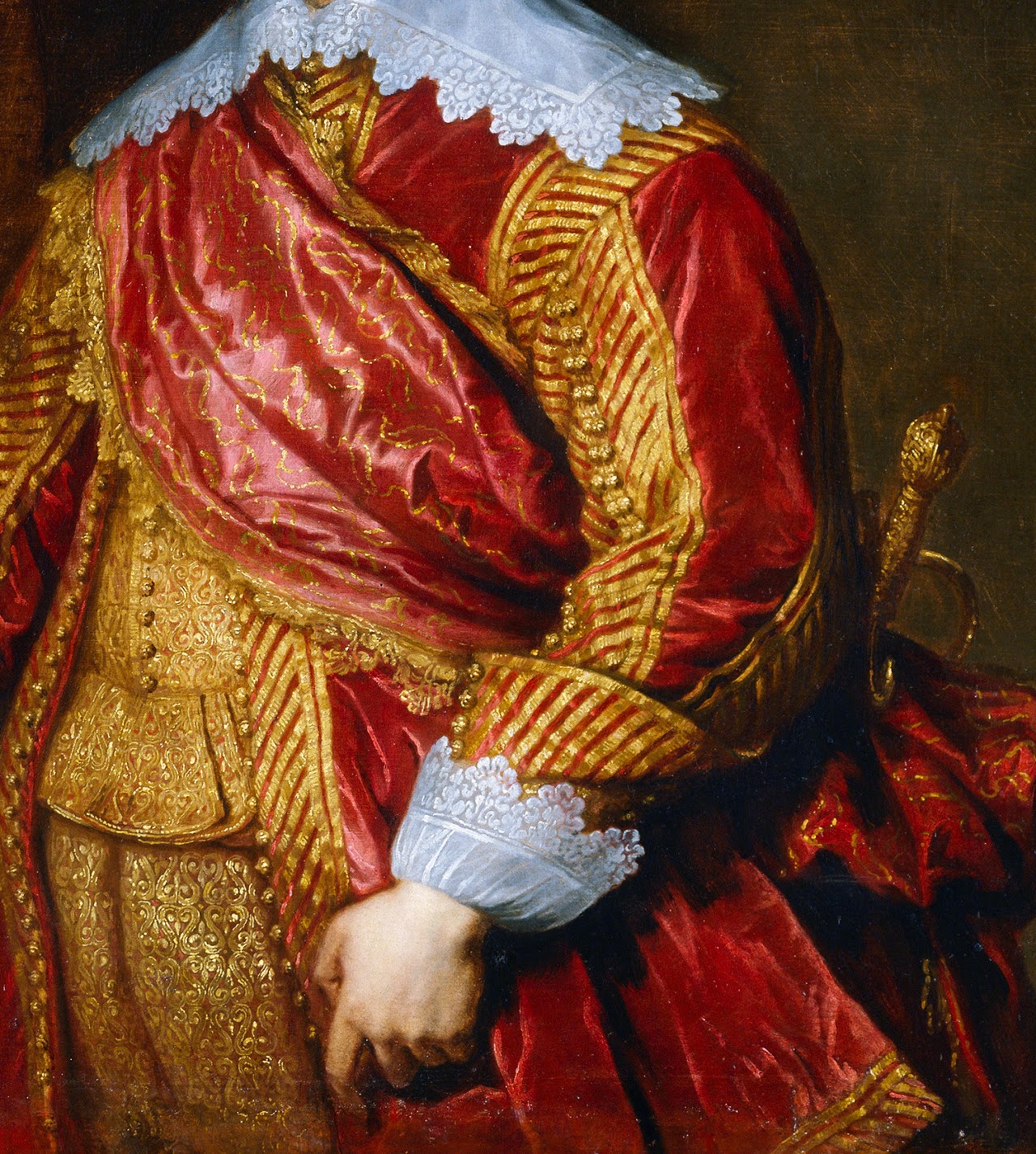 This is a detail image from a painting by Sir Anthony Van Dyke of Cardinal-Infante, Ferdinand, Archduke of Austria.  There was a pronounced fashion in the 1600s for using massive amounts of ribbon, galloon, or braid on clothing in regimented rows, as you see here.  It was a convenient way to express wealth and station.  The more that was used, the richer you were perceived as being.  In this case, the trimming is very likely made up with gold wrapped thread. So this would have been ferociously expensive.  Considering the Archduke's station in life, he would have had the money at his command to do this, or any other seriously pushy outfit he wanted.  And that doublet and breeches, in gold brocade, AND the gold lace trimmings.  Oh yeah, this guy wasn't afraid of spending a dollar or two. 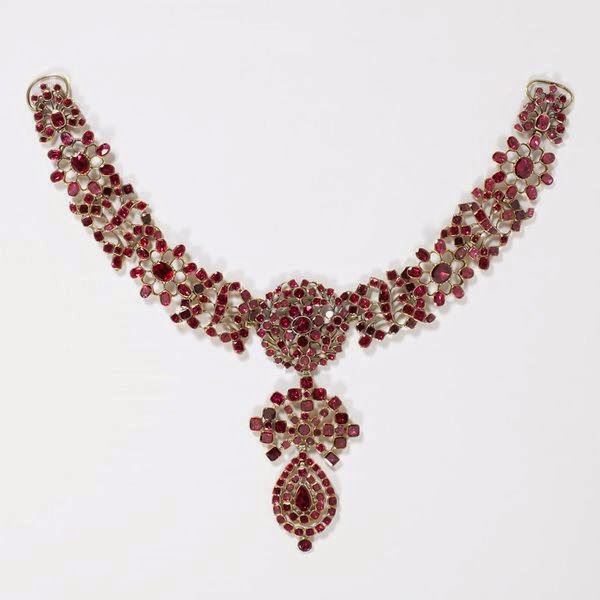 This pendant necklace is British, and from between 1760 and 1780.  What's interesting to me is that its design is deeply influenced by India, and the trade already in progress.  It was not the fashion in Europe for jewelry other than diamond pieces to be composed exclusively of one sort of stone.  This article, is made up entirely in rubies mounted in gold. Also, the openwork style of the necklace is a common theme with Indian jewelry.  Though this was made in England, its likely the stones were all imported from India, along with the design ideas. 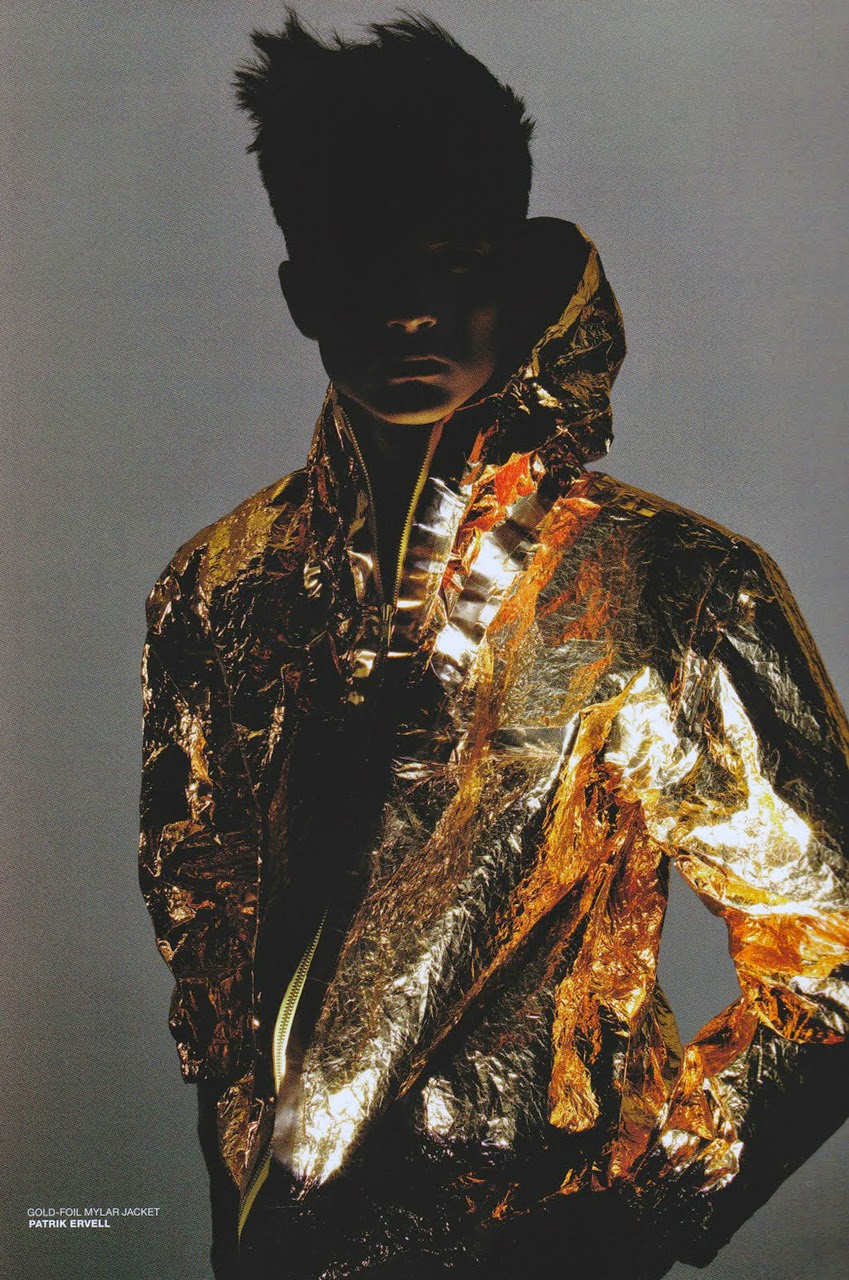 What a race of magpies we are.  There is something about shiny things, and in especial, gold, that we really cannot seem to resist.  This Patrik Ervell jacket is a case in point.  Made up in foil mylar, it gives the wearer the look of being a huge chunk of raw gold.  For most folks, wearing this much shiny would be overpowering, or perhaps we might think so, but for the person with enough brio, this is a great little number to clap on.  Oddly though, the psychological attachment to wealth seems to diminish with a garment like this one. 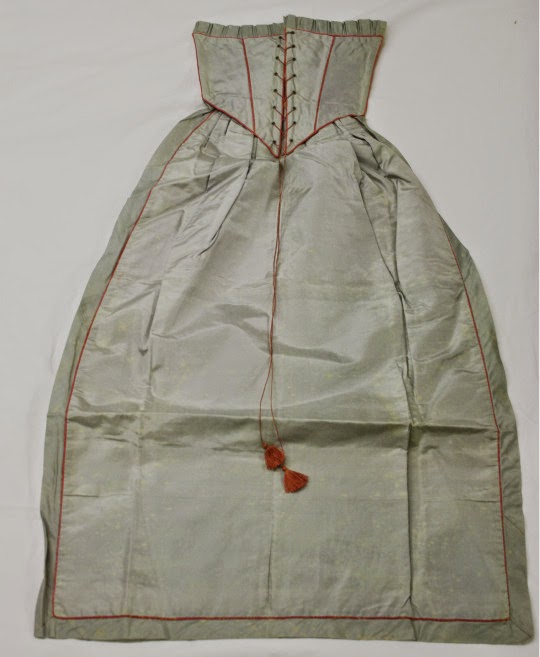 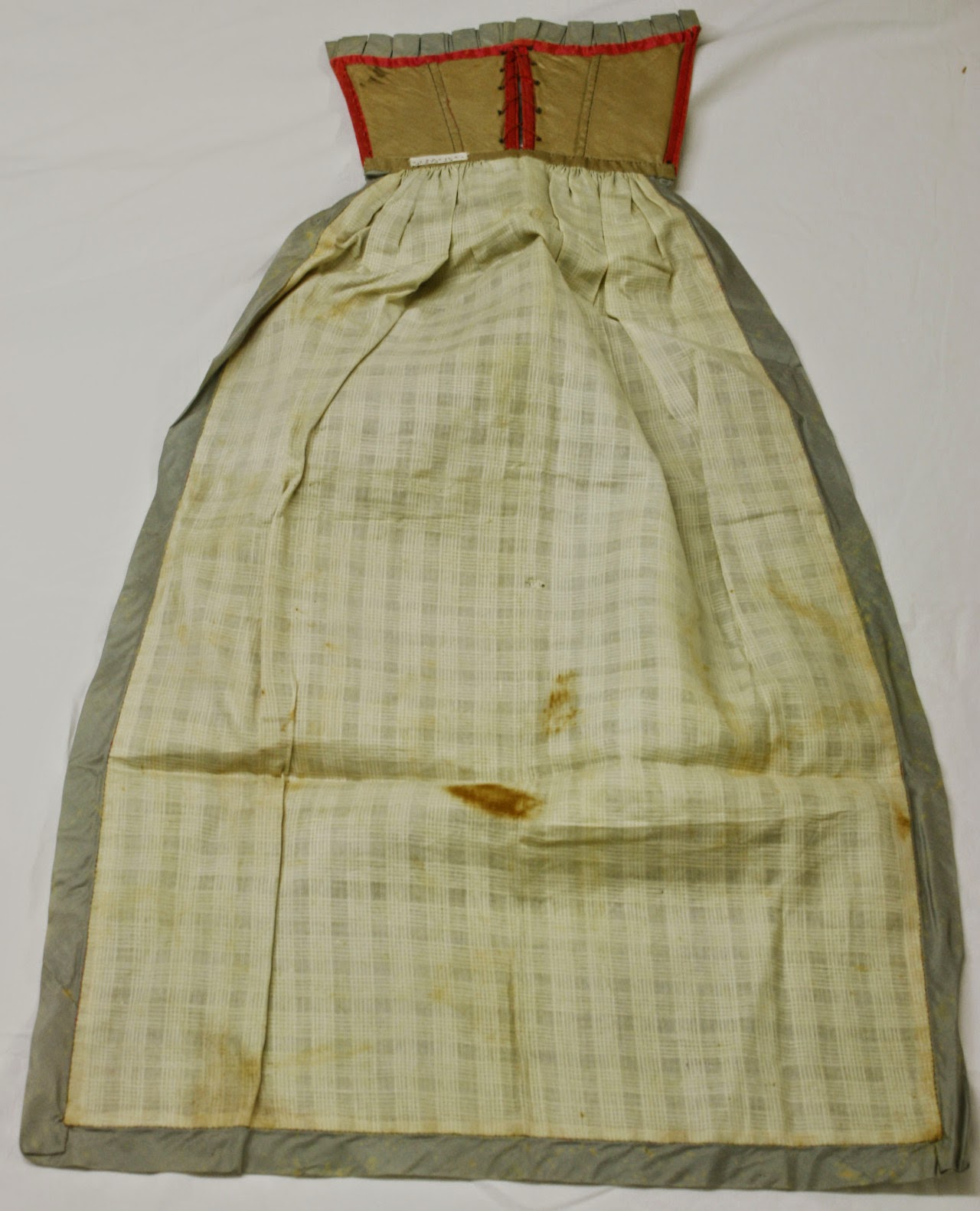 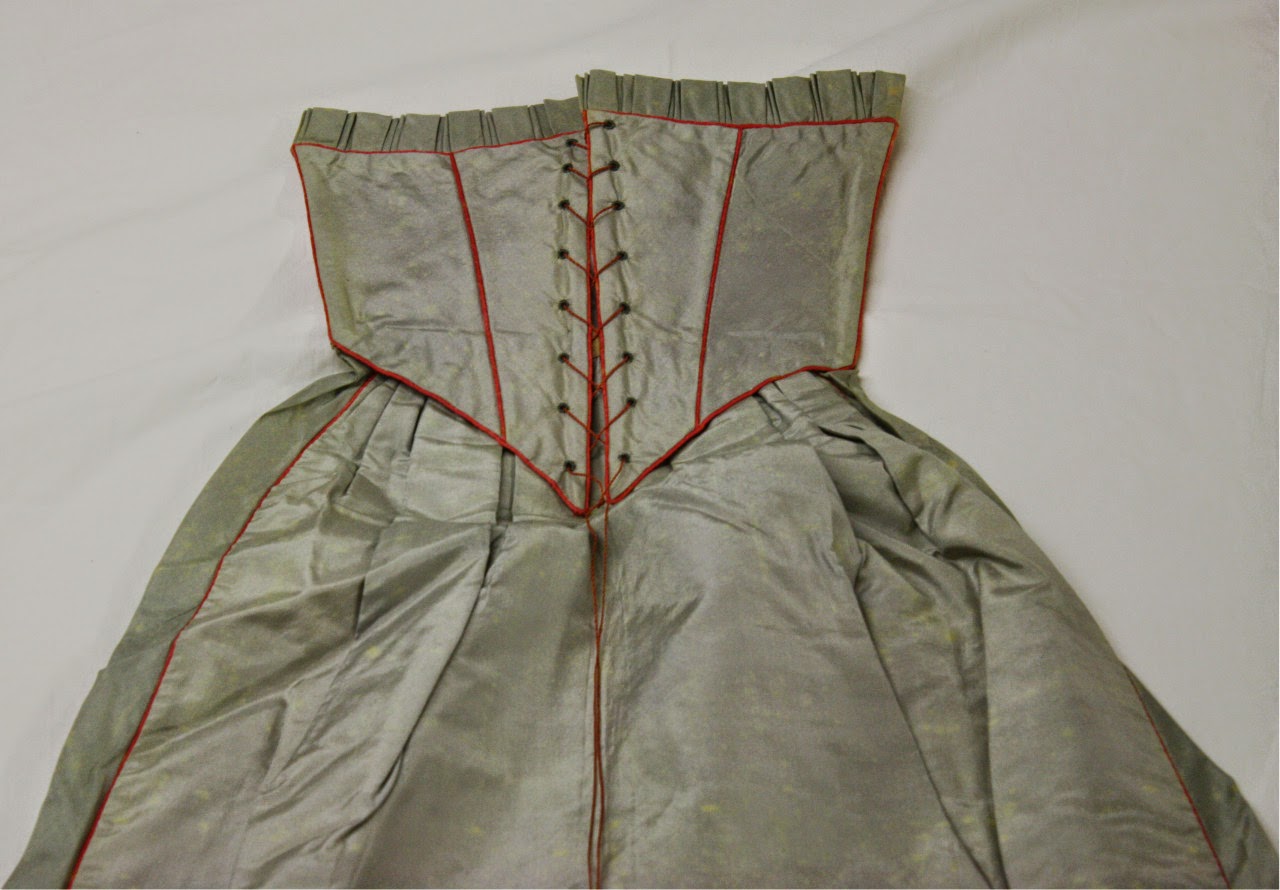 The Fennimore Museum in Cooperstown New York is home to this charming article.  Its an apron made up to reference the fashions of the 1700s.  The lady of the house would have worn this while doing her round of chores, particularly while in the kitchen. Its interesting to note that the apron, which is made up in silk, is actually boned in the front.  I suspect this is in part to mimic the style of the prior century, and also because there were no neck ties to insure its staying up.  A marvelous survivor, considering that such an item would've been given hard wear.  Why silk?  It's actually a very tough wearing material. 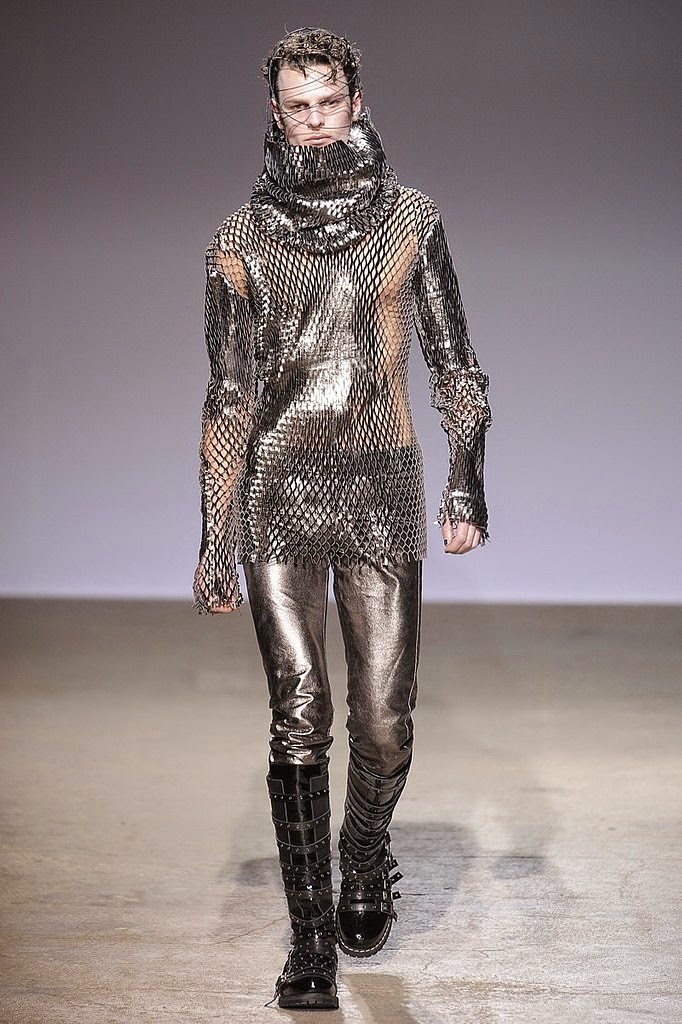 I seem to be on something of a shiny things jag today.  Gareth Pugh, 2009.  While I'm not an especial fan of mesh fabrics, I love the movement of this material.  And I could absolutely see this worn over a colorful long sleeve tee, and looking smashing.  Also, I do love a big cowl neckline.  Its really quite flattering to a lot of folks and, without the part that wraps the head literally, I could really be on board with this.  Love me some Gareth.  He's one of my favorite avant garde designers. 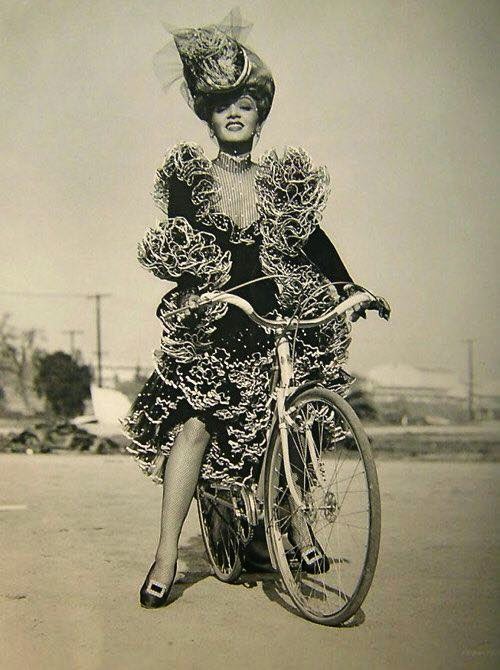 Marlene on wheels!  How could I not?  This was shot during production of the western, The Spoilers, from 1942.  Why the bicycle?  Well it was common practice for actors to use studio provided bikes to get from one place to the other on studio grounds. Now, would Ms Dietrich have gone tootling around in her frilly costume on her bike?  Nope. this was done for promotion.  They would have been far to afraid of an actor damaging an expensive costume of this sort.   But its a wonderful image and I just hadda. 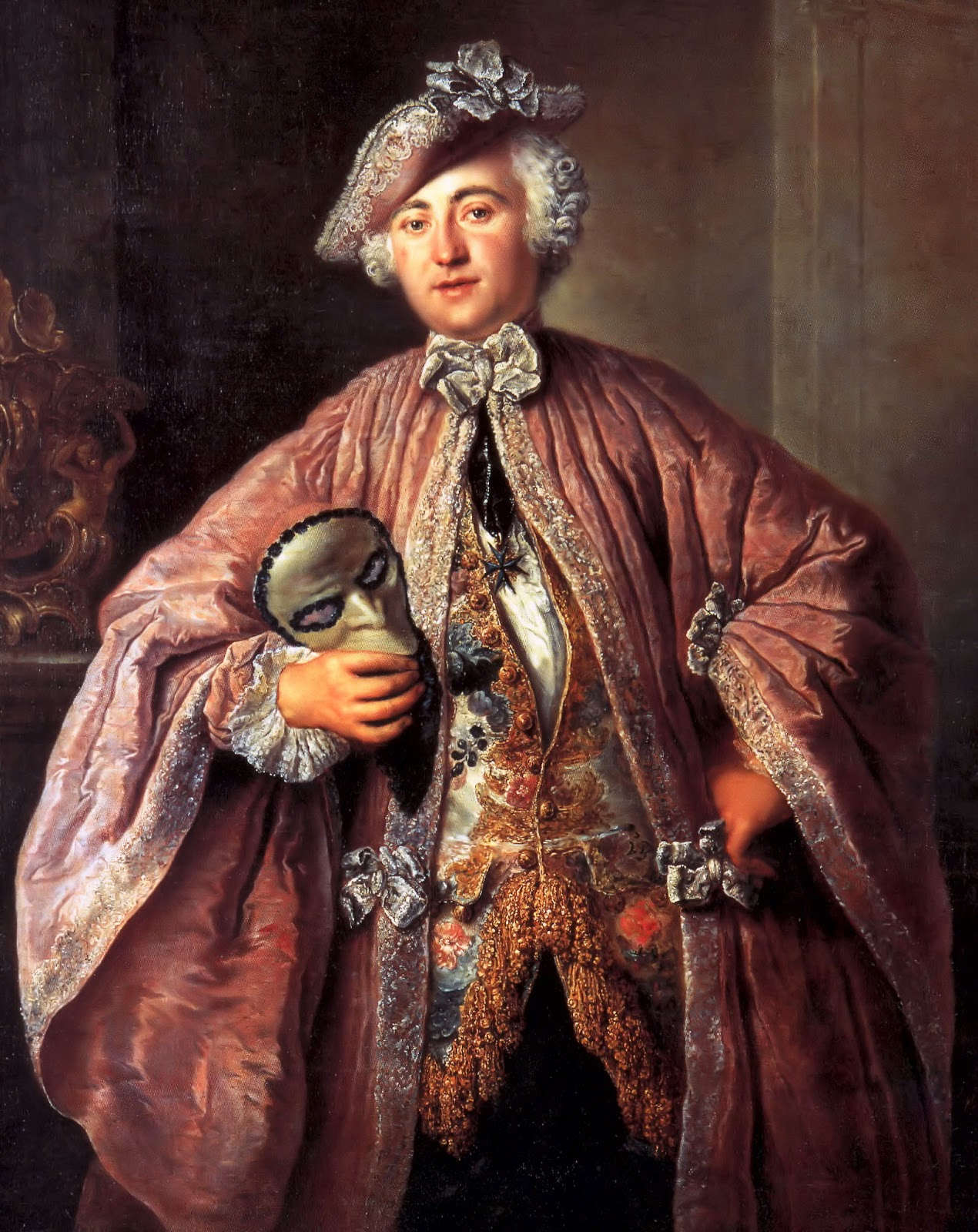 This is Franz Egmont Von Chasot as painted by Antoine Pesne.   Von Chasot is dressed as for a masked ball in Venice.  He carries a painted bauta, and is wearing a wonderfully extravagant version of a man's cloak.  It appears to be a pink silk shot with silver threads in the weft, which gives it a marvelous shifting coloration.  But the biggest reason I wanted to post this is because its such a splendid example of how our perceptions of masculinity have shifted over time.  This ensemble would have garnered not a whit of disapproval from other men.  He would have been thought no less masculine for wearing pink, or having bows placed on his apparel. Sure, this is intended as fancy dress, but in real world terms such colors and ornaments were normal wear for men, as well as women. 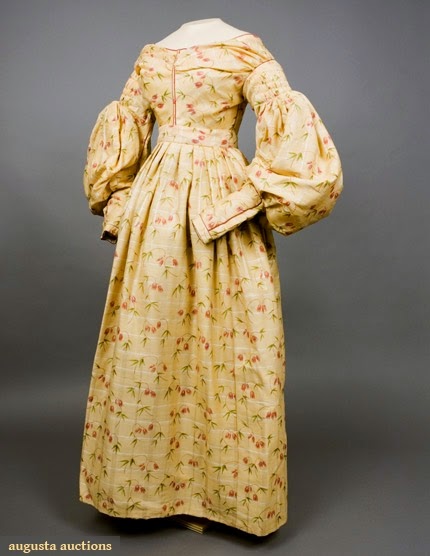 Augusta Auctions offered this charming printed wool challis dress some time back.  During the 1830s when this dress was made, the fashion occurred that placed a huge amount of sleeve volume at the elbow. It certainly was one of the odder fashions for women to come along.  Frequently such sleeves would be stuffed with down or some type of wadding to fill them out so they would collapse while worn.  The sleeves would have an opening on the inside seam that would allow the wadding to be removed so the dress could be cleaned.  I've remarked before about how much the point of focus shifts. This is certainly one of the more unlikely places for that focus to have landed. 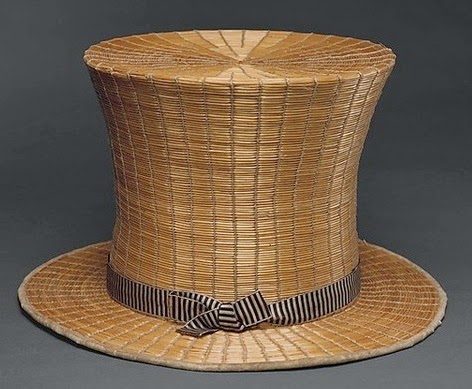 As a finishing item today, a hat!  We tend to think of toppers as being always made of some type of felt, silk or fur.  But for summer wear, straw top hats were made, and much worn.  This one is American made, from 1820.  That it survives intact is a wonder, considering how fragile straw gets once it gets really dried out.  But its a jaunty, delightful hat, and must have made the young fella who wore it feel great.

That's the lot for this week, folks.
Have a splendid weekend!