Its arguable that the Victorian period in England and America gave rise to some of the most heavy handed, complex, and flat out creepy mourning customs in human history.  And certainly one of the most bizarre was the creation, and wearing of mourning jewelry. Its a category of accessories specifically designed to accompany the entire process of Victorian mourning from the first day, to the end of a year, when family could leave off mourning, at last.  Only royalty was required to extend mourning beyond a year. 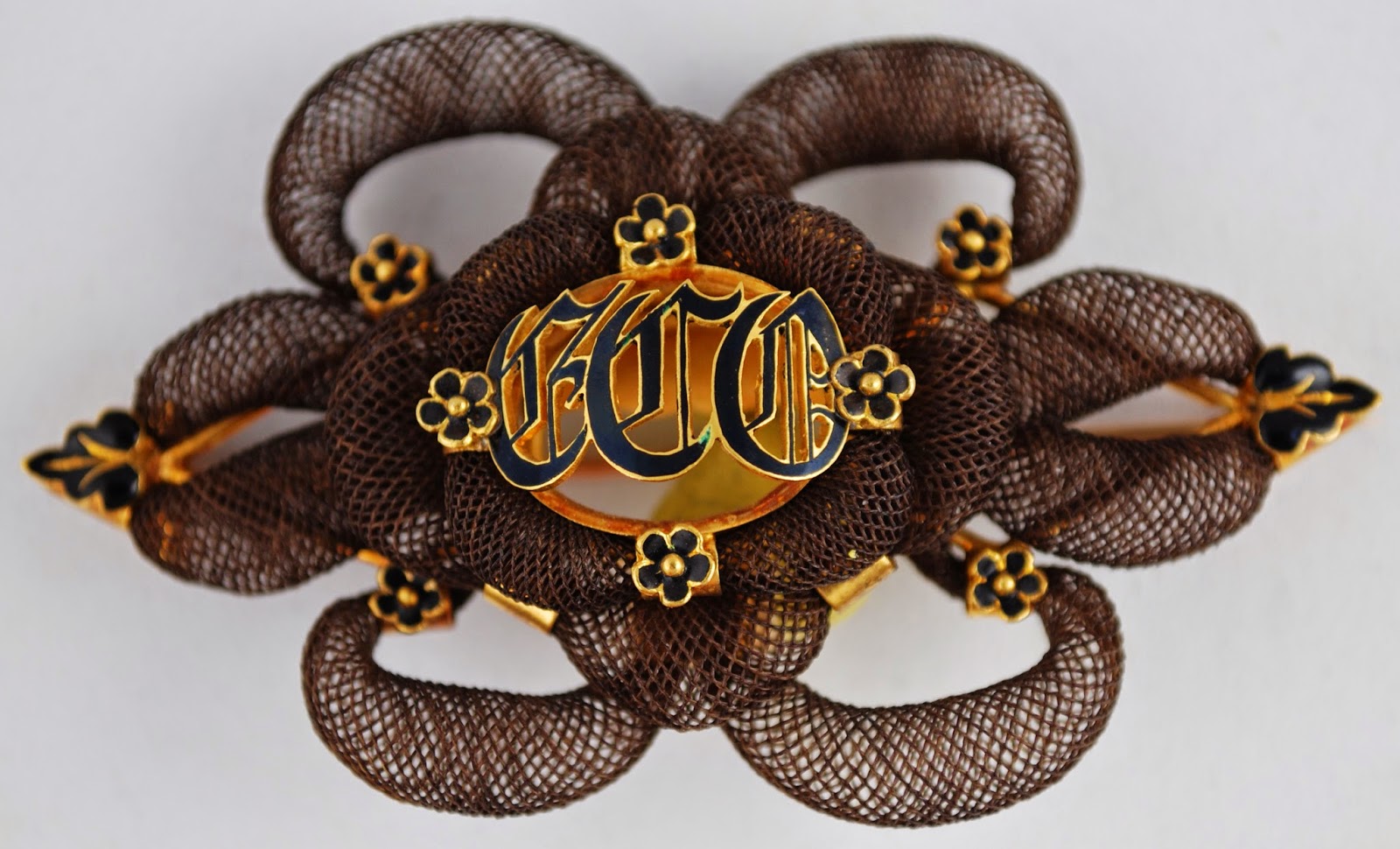 Considering the frighteningly high level of early death that was the reality at the time, very few people were untouched by the long and intricate mourning process, and for people with large families, they spent a great deal of their time, dressed in black, gray, or purple.  Few families were without the reality of a child's death, and even young adults could easily succumb to things we give no serious thought to now.  So black was really THE color for the Victorian period. Every ready to wear establishment had big departments devoted to black clothing.  Milliners had sections for mourning hats, and veils.  And jewelers fell right into line. 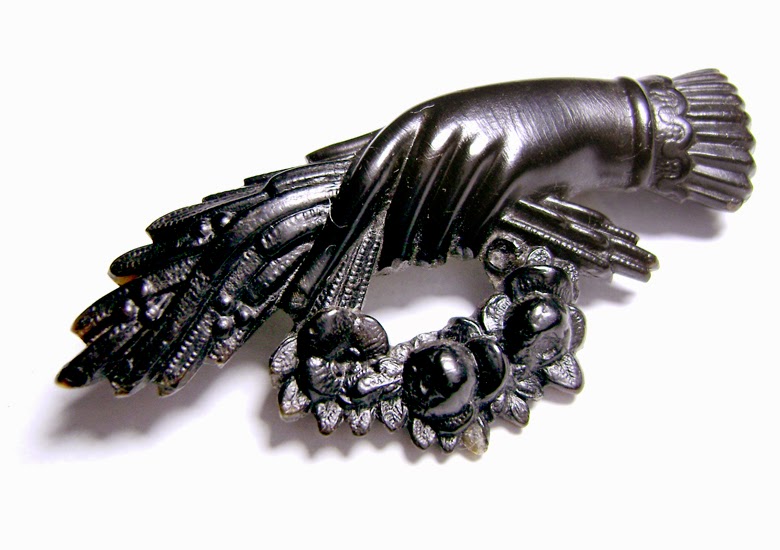 There were two types really, of mourning jewelry.  The first was jewels created mostly out of lignite, also known as jet, that were entirely black, or at least dominantly so; and could be worn by anyone during the long mourning process.  Jet jewelry was a significant adjunct to any jeweler's business, and most jewelry shops had cases full of it at all times. Such jewelry could be really quite beautiful, and was often as lavish and overblown as the rest of the Victorian aesthetic.  Sometimes entire parures of jet jewels were created, even including jet tiaras.  See, it wasn't considered needful that a person leave off fashion one bit, or eschew the overt display of wealth.  It was only important that all of the clothing be black. So a lady, in particular, could be as up to the moment fashionable as she wished, as long as it was in dull black fabrics.  So, that said, the jewelry to go with such attire was similarly allowed to be as fancy, and showy as you desired. 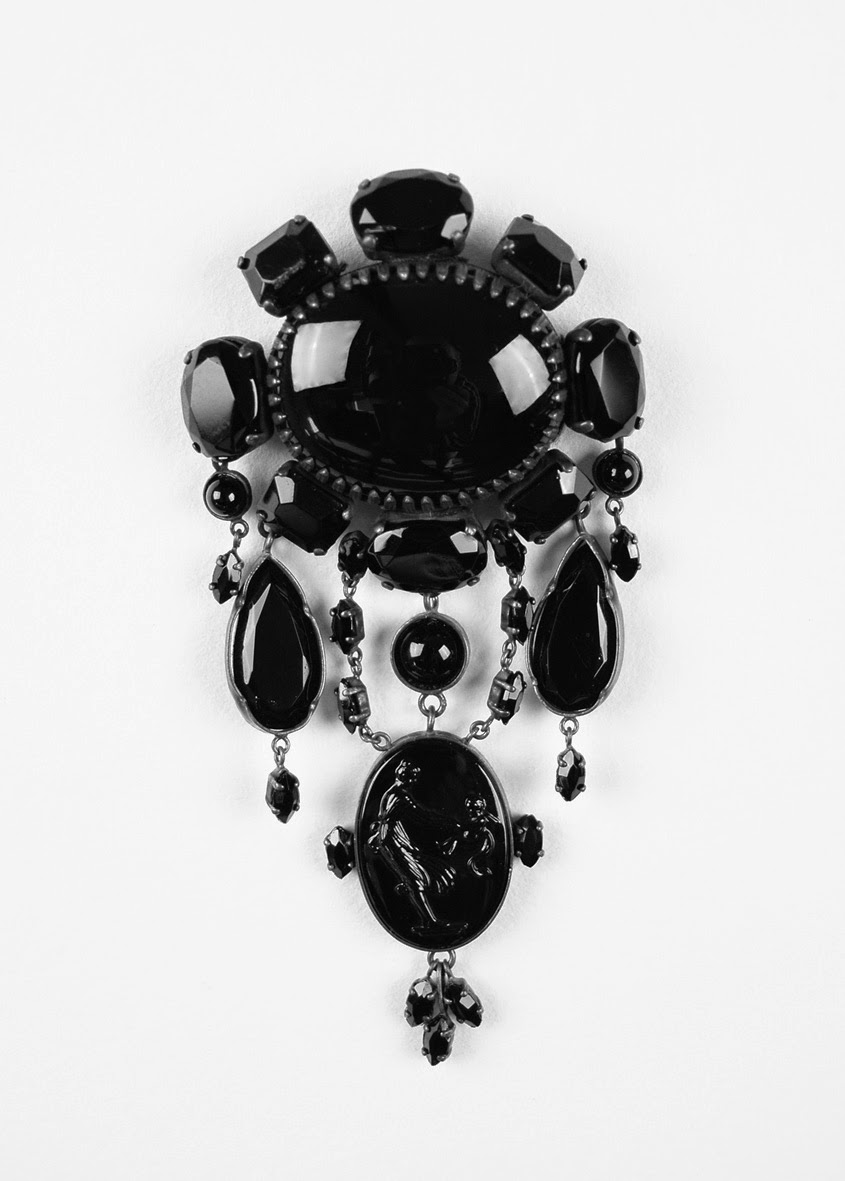 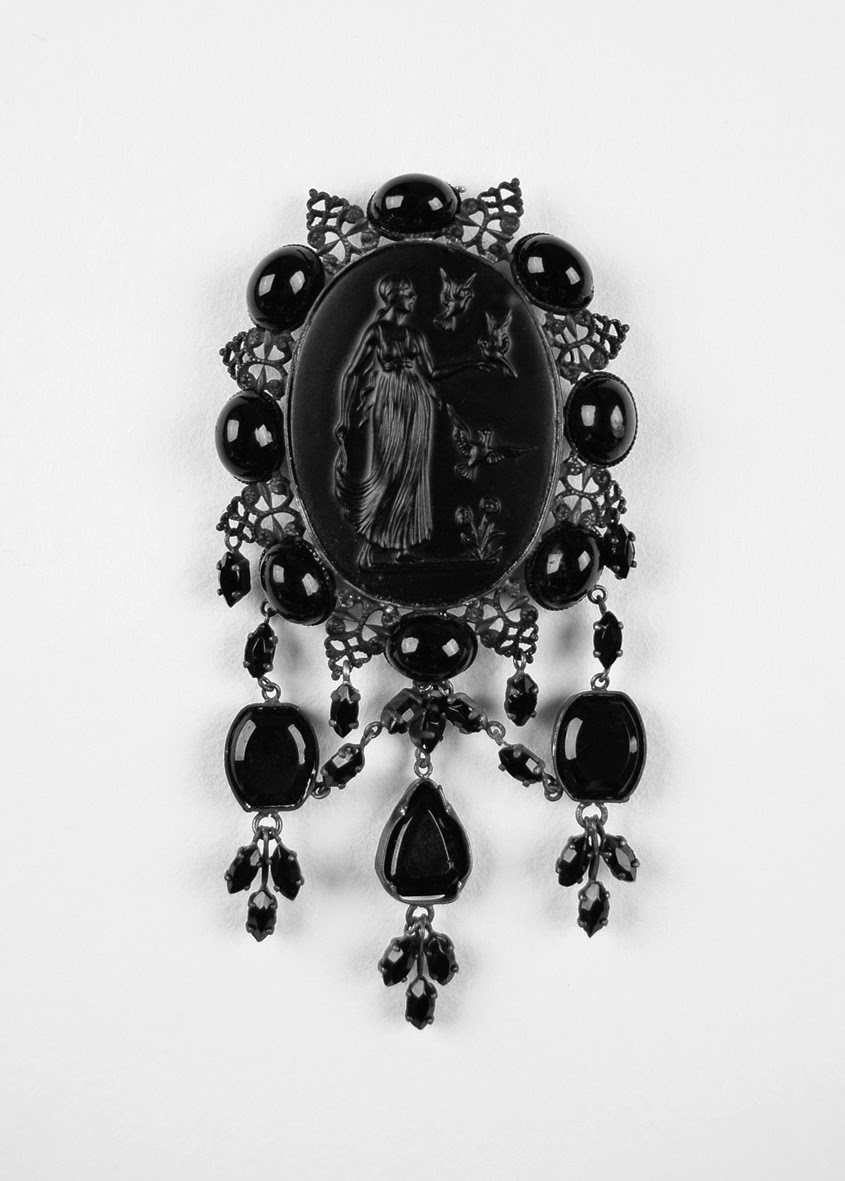 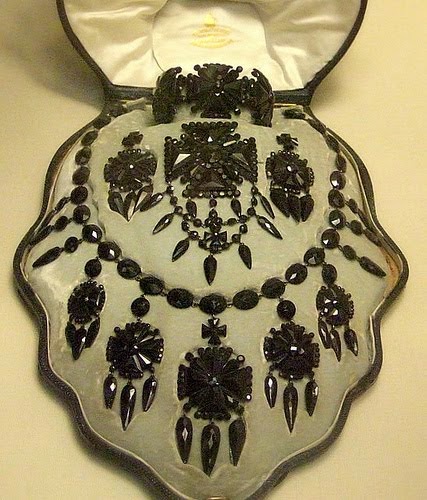 Jet jewelry was the go to for the majority of mourners.  But there was a second category, that was far more personal, and to our 21st century tastes, more than a bit unsettling.   It was a commonplace for someone grieving the loss of a loved one, to make by hand, a piece of jewelry out of the lost love's hair.  Often the hair was plaited tightly, and made into a bracelet,  inserted into a brooch, or fashioned into a ring. 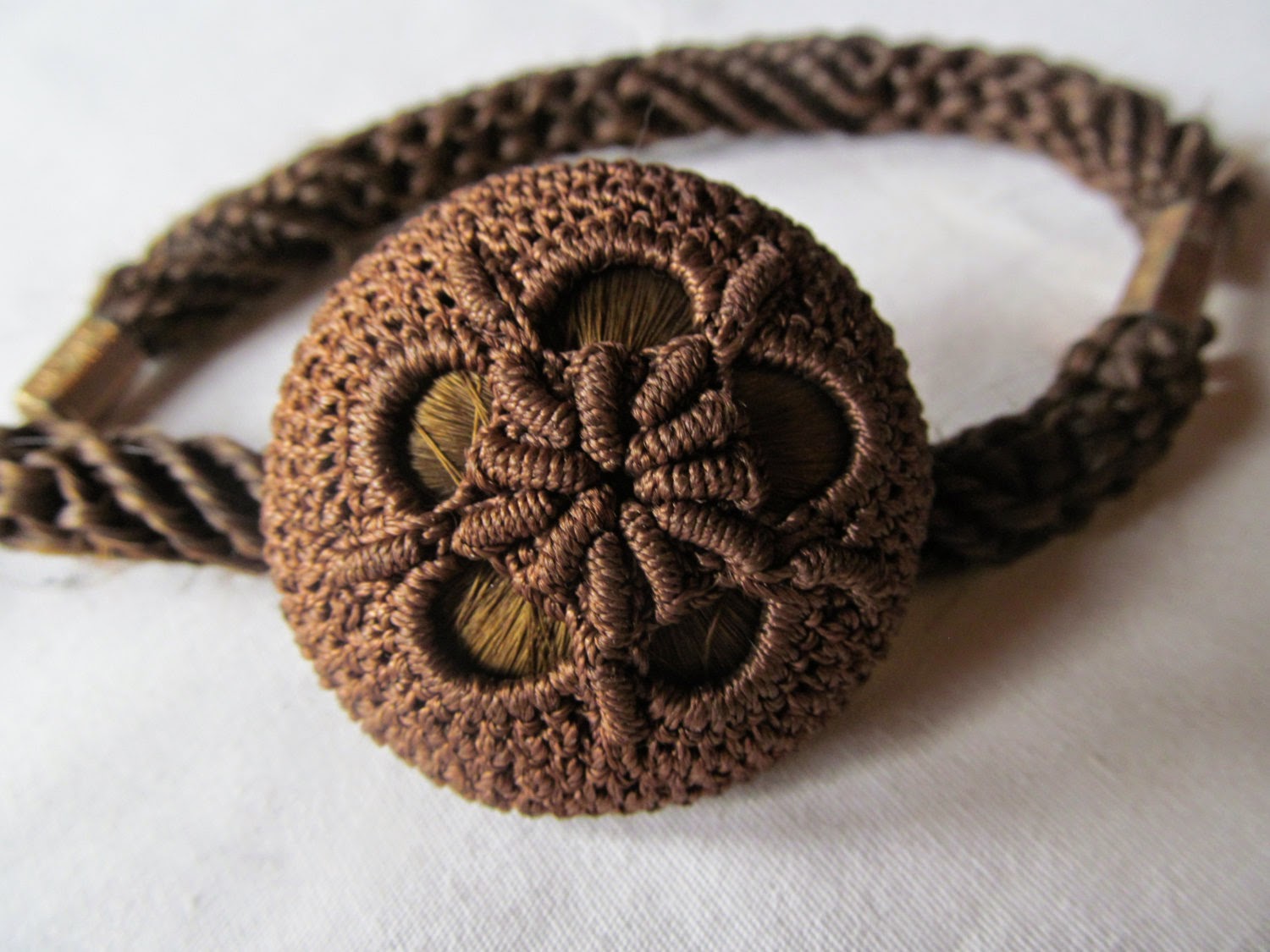 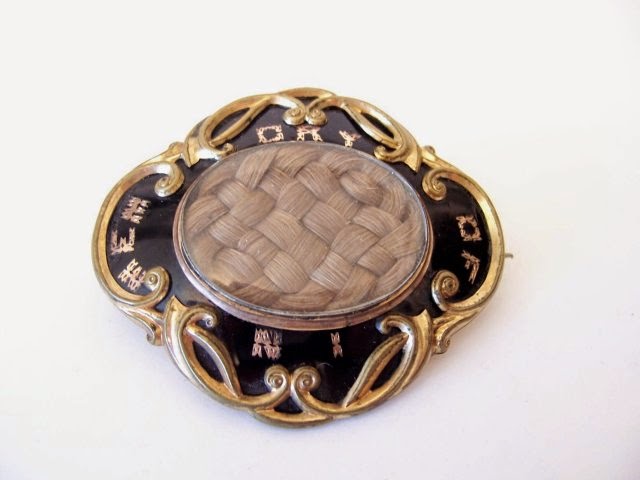 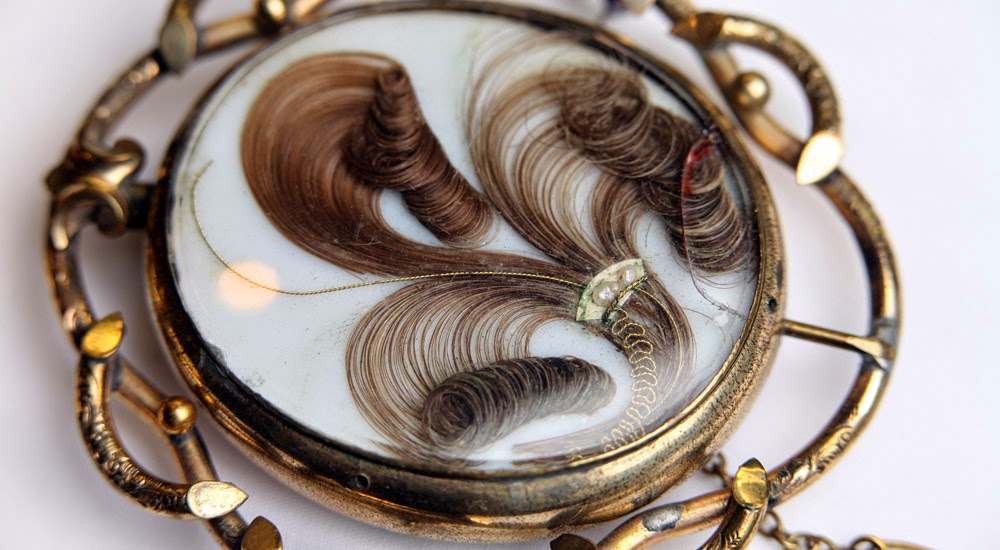 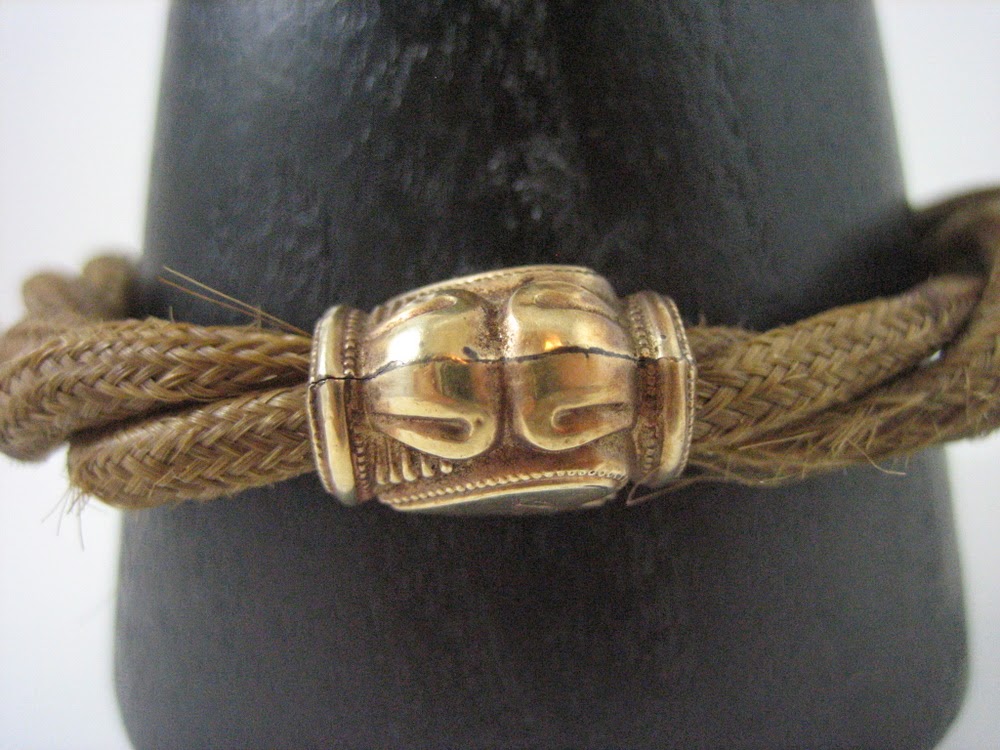 Other more personal jewelry used a child's tooth, or perhaps a brooch would be made with a hand drawn image of a weeping eye.  The single eye with a tear, is a centuries old symbol of morning dating from the English Renaissance. 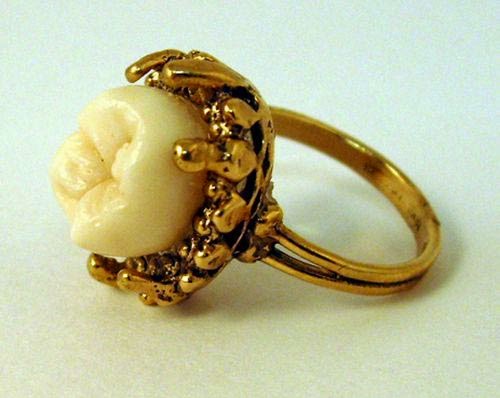 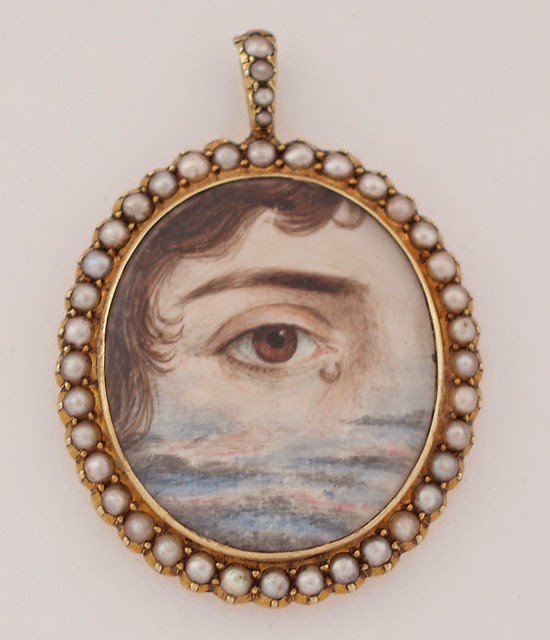 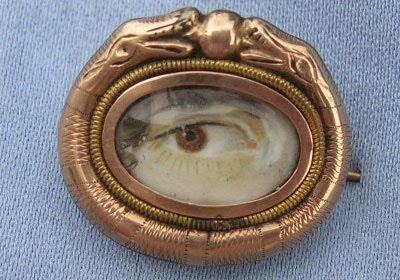 All these customs faded away after the beginning of the 20th century, and especially because of the introduction of photography.  It was no longer as needful to remember the lost with memento mori, as it had been, since you could gaze at their picture anytime.  But, it was a huge and vital tradition, that consumed a century of time , and affected every station in English and American society.
Posted by Paul G. Ellis at 9:06 AM