Arguably, the most important change that happened for menswear after the French Revolution of the last of the 18th century, was the virtual erasure of surface detail as an important player in men's apparel.   By that I mean, the focus shifted profoundly, from layered pattern, complex textiles, and multiple embellishments, to a focus on structure itself. It became all about the perfection of the cutting and finishing of a suit of clothing; not about texture, color, or fineness of decoration. 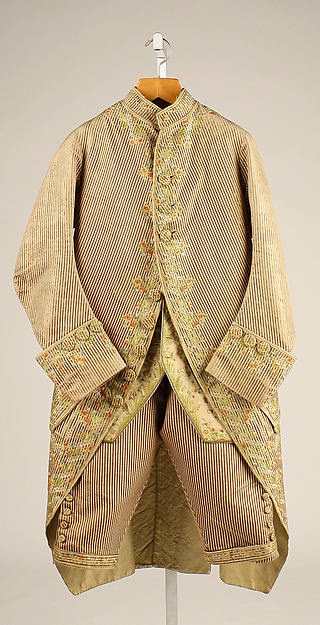 It certainly could be argued, and I have done so here before, that men's clothing lost a considerable amount when that shift occurred. What we gained was a substantial refinement in the art and craft of tailoring.  In particular, in England, tailored clothing reached levels of subtle sophistication it has never achieved again.
But lets take a look back at the prior century for a bit, here.  Focusing on one particular suit, currently part of the vast collection of the Metropolitan Museum of New York.
The images here are of a French made suit from between 1775-and 1785.  Its entirely of silk, and would have been an appropriate garment for an upper class gentleman, or a lesser noble.  Its level of decoration marks it as not fully formal court wear, but it would have been acceptable as daytime wear for someone at court. 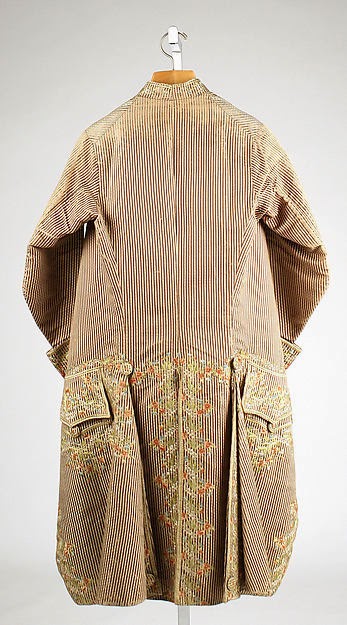 To begin with, the textiles commonplace to such clothing were densely textural, multicolored, and finely woven.  For men, these were more often than not variations of stripes, dots, or diamond patterns.  This one is a deep chocolate brown, camel, and cream. 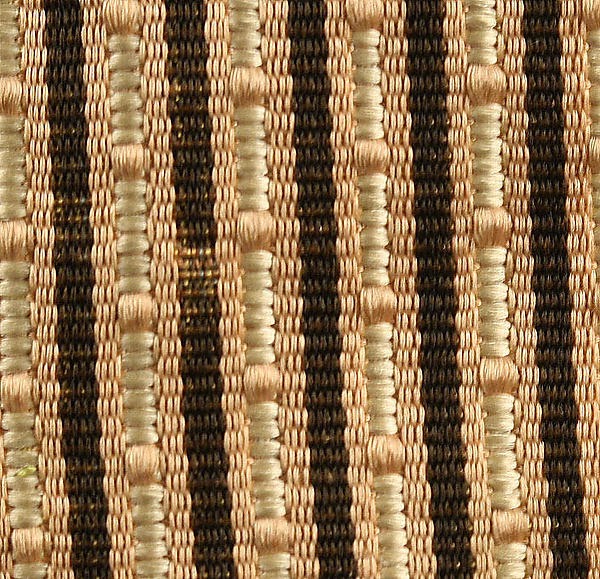 The decoration of the suit fabric was done en disposition, so that when made up the embroideries would be harmonious across the surface, and move without interruption from top to bottom, and side to side. Juxtaposing floral based motifs with the regular patterns of the base textile, was a often repeated idea.  In this case the design of blue and peach hued wildflowers is a nice contrast to the rigid formality of the fabric. 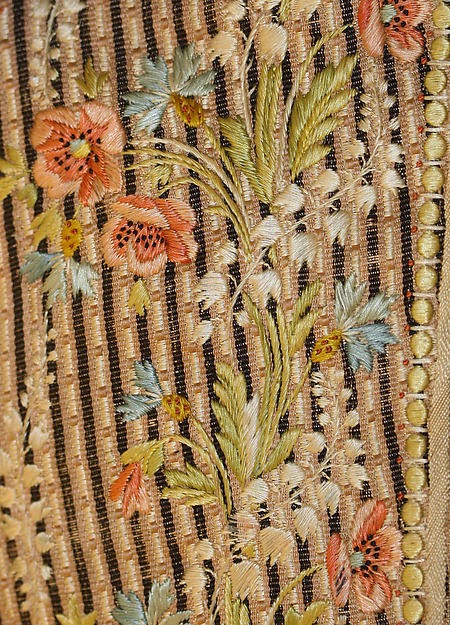 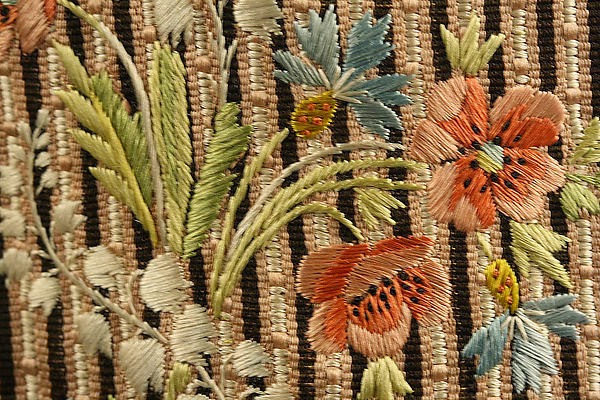 One of the drawbacks of embroidering in this way, to order, was that there was a subtle, but identifiable loss of precision in construction, when, to accommodate the design of the embroidery fully, fit had to be adjusted slightly.  In the earlier part of the century, this was less problematic, as the suit fit was less restrictive, but the closer you get to the end of the century, the tighter the suits got, and the greater the possibility of error.
In addition to the suit body, very often the buttons to be used for the suit would be covered to match, and each one embroidered with a miniature version of the motif of the decoration. 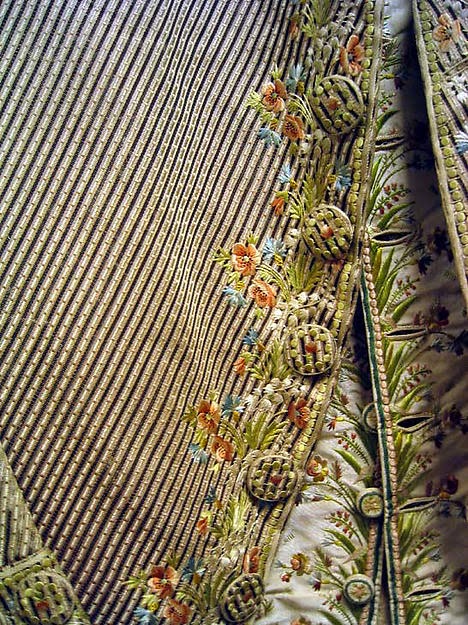 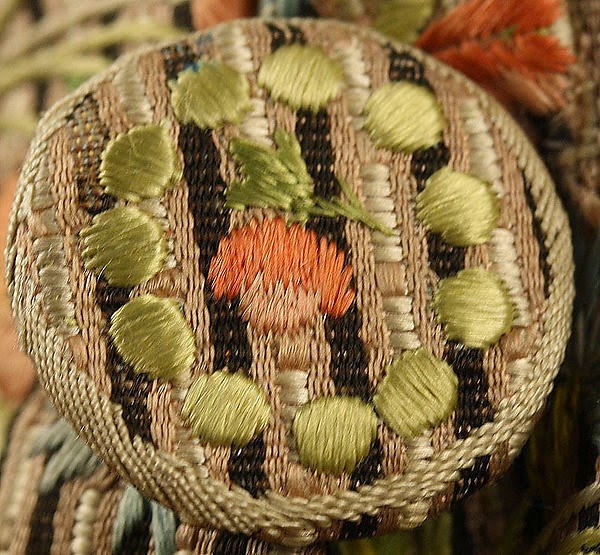 And the waistcoat, most often of a contrasting fabric, with a companion decoration that was not a match to the suit body would be more completely embellished, since often the fabric of choice was plain stuff, rather than some figured design.  Frequently, as here, the entire front surface would be embroidered to the taste of the client wearer.  The back of the waistcoat was never embroidered, and very often was made up in some far less expensive fabric than the front.  Linen, cotton, and fine wools were much used for the back of the waistcoat, since it would be unseen in public. 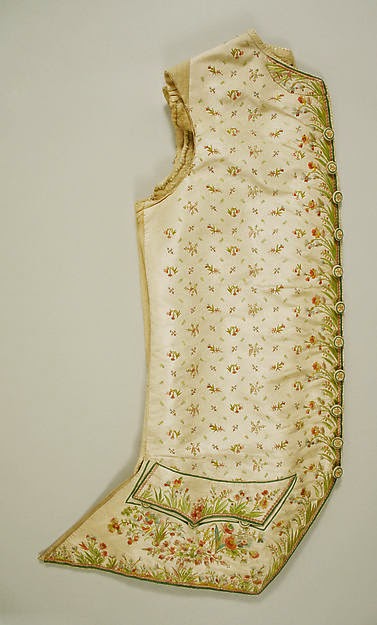 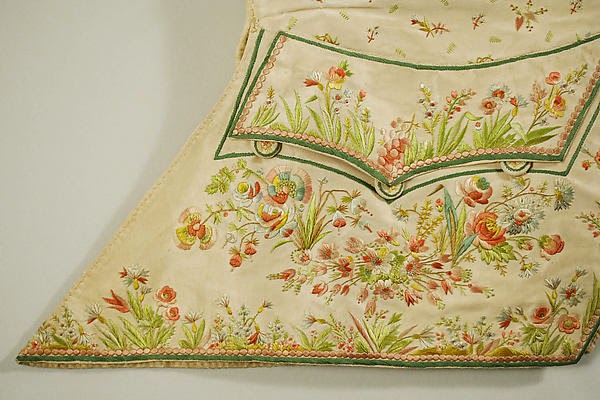 So, in nearly every respect, the attention and time were focused on the surface decorations, and the interplay of colors and textures; perfection of fit, being a far lesser concern. 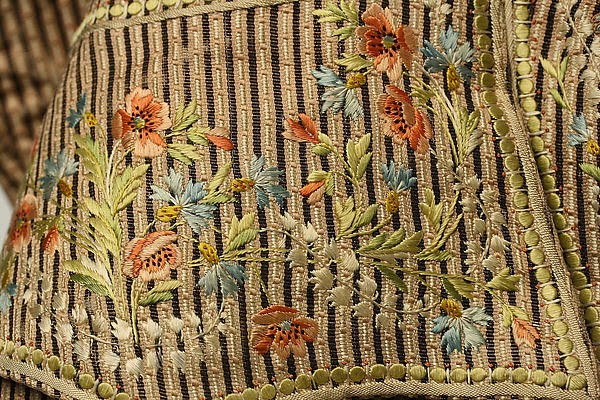 By 20 years from the date of this suit, the shift would be complete, and the attention will have moved nearly entirely to fit, and cut.  Textiles for men would be nearly always flat finished, smooth materials.  The only place where elaborate fabrics still got used was in gentlemen's waistcoats, though lavish embroideries had fallen out of favor.
And here, more than 200 years later, we still feel the effects of that change.