The wheel jus' keeps on turnin'.  So here we are right back where were a week ago, but somehow, further along, at the same time.  Scattertime!  Lets do this! 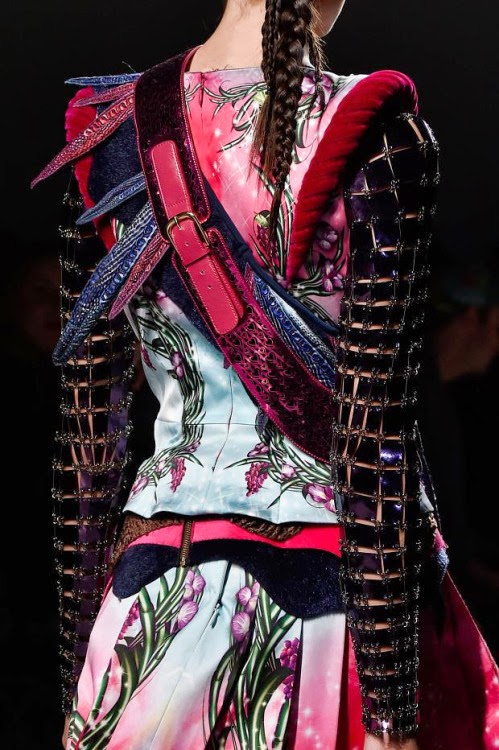 Designer Manish Arora presented this look at the F/W 2015 collection.  I was struck by the complex interplay of colors, textures, and influences.  There is a sense of Chinese culture especially present in both the choice of colors, and the padded shoulders.  The belted shoulder piece with its feathers imitated in beadwork calls to mind other times and places, and gives a strong warrior woman feel to it.  Then there are those amazing plate work sleeves with the varied shaped pieces that give a nearly reptilian look to them. All in all, this is emotionally powerful work, and a great example of what level of communication a single ensemble is capable of. 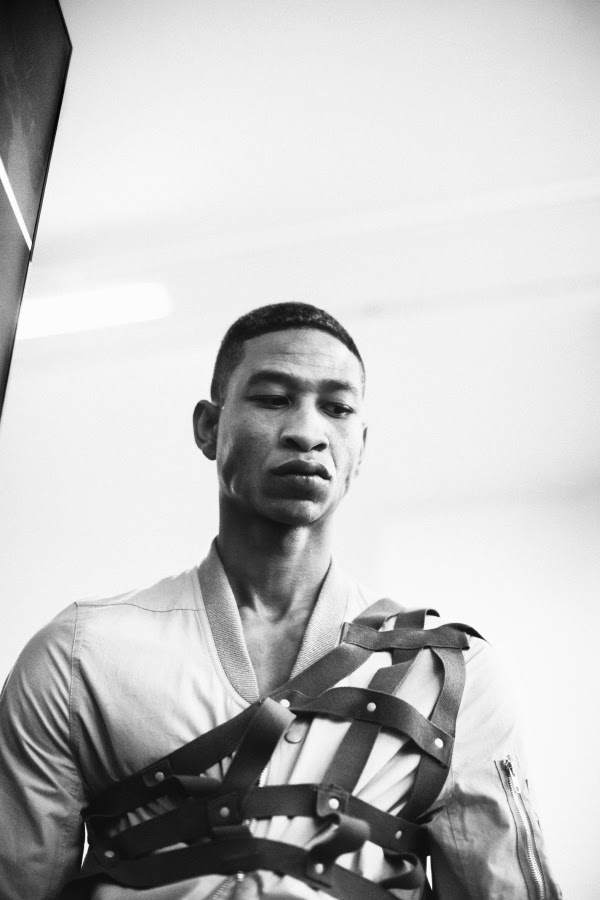 Kortney, S/S 2015.  Speaking of emotional power, and the ability of apparel to communicate, though I'm not on board with this as a statement I'd care to make myself, I cannot deny that, if it was the designer's intent to disturb us, to give us an un-quiet moment in time, they have succeeded.  The strange, twisted strap harness over that unremarkable jacket conveys thoughts of being unhappily restrained, of being perhaps even internally trapped.  As I said, not a statement I'd care to make, sartorially, but nonetheless a potent one. 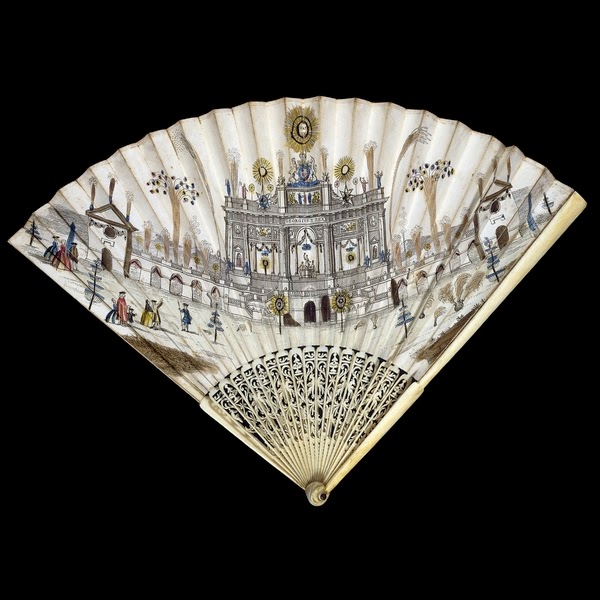 One of the commonplace souvenirs of major public events was the fan, back before the 20th century.  This one is of an etching, printed on paper, and then hand colored, mounted on ivory sticks, in celebration of some Royal fireworks.  Its from 1749.  Since the mounting is ivory, this would have probably been a smaller production gift, not one for a greater masses of folks.  The likelihood is that the same design would have been mounted on wood, for the commonality.  The design is charming, and recalls to mind the time when such an article was an indispensable part of a ladies wardrobe. 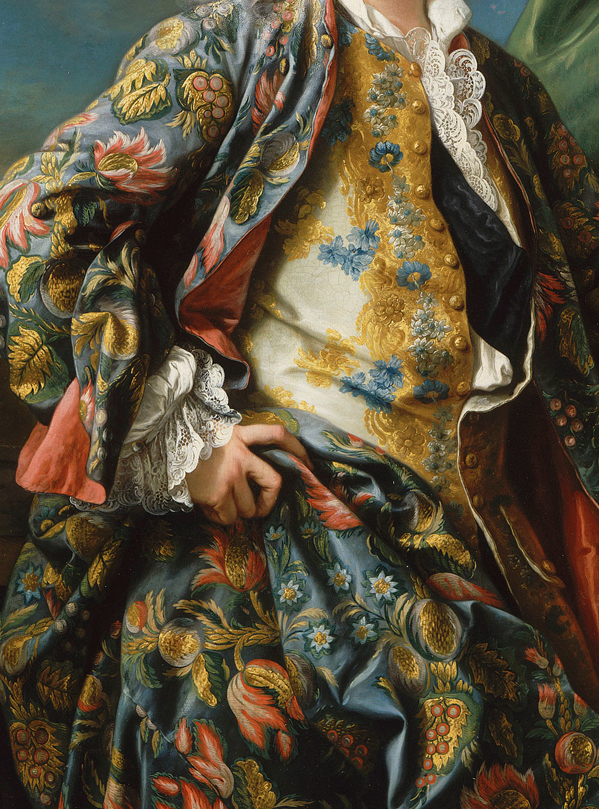 This is a detail of a portrait by Charles-Andre Van Loo of Jacques-Germain Sufflot.  Its a worthy addition here to show you just how wonderfully colorful, and lavish the colors and patterns were for gentlemen's attire in the 1700's, before most of the color leached away in the 1800s.  His waistcoat is white with glorious gold and blue embroideries over most of its surface, and his huge banyan is of a complex fruit and flowers design in gold blue green and coral on a gray ground, lined entirely in brilliant coral satin.  Men lost out big time when the 1800s began. 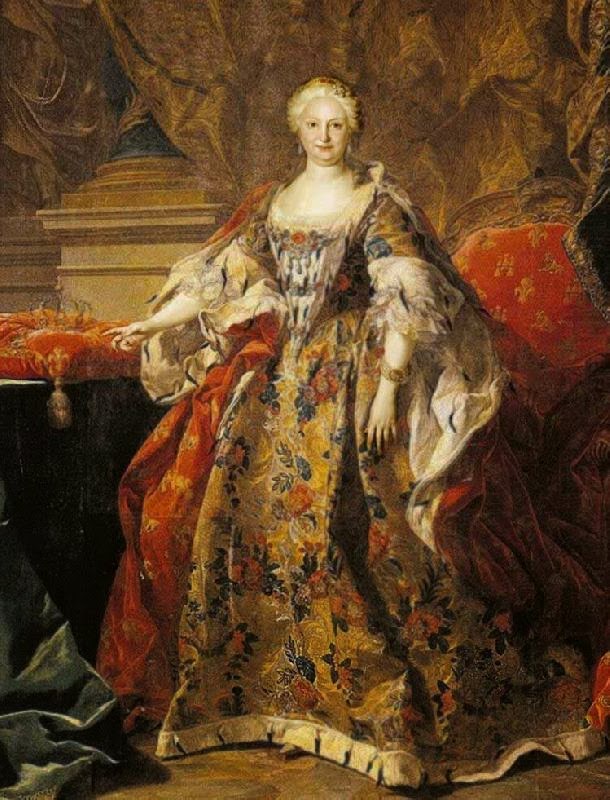 Louis-Michel Van Loo, did this portrait of Elisabeth Farnese.  ITs a great look at just how far the aristocracy was willing to go to make absolutely certain you understood who had the most clout in the crowd.  Her dress, of silver metallic threaded floral brocade, is larger in width than was a general fashion, but acceptable by people of the highest rankings.  The cape train of heavy silk velvet is patterned with the symbols of of two royal houses, and both the dress and the train are awash in ermine and ermine tails.  At the time it was the most prized and rare of furs, since ermine are tiny critters such lavish use of them would have been extravagant indeed, trumpeting a clear lack of concern about cost.  That is, of course, exactly what was meant.  As a series of overt symbols of power, influence and money these were common among aristocrats.  So much was this true, that sovereigns who chose not to indulge such things were thought cheap, tight-fisted, and dour.

Good design is good design, period.  This pendant, in silver, with marcasites and jade, is not just a wonderful example of the Art Deco design philosophy,  but of good design in general.  Its a simple design, handled well.  Nothing more to say besides, bravo to whoever created this.  It would grace anyone's throat today, as it did in its early days. 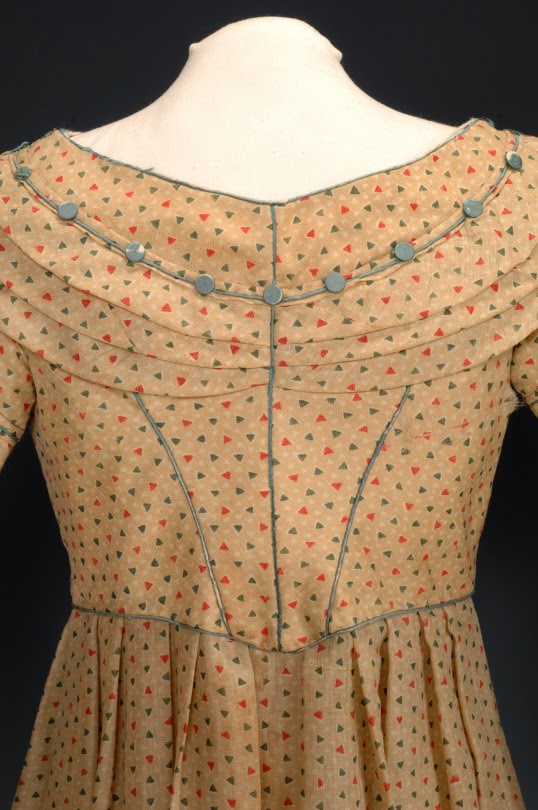 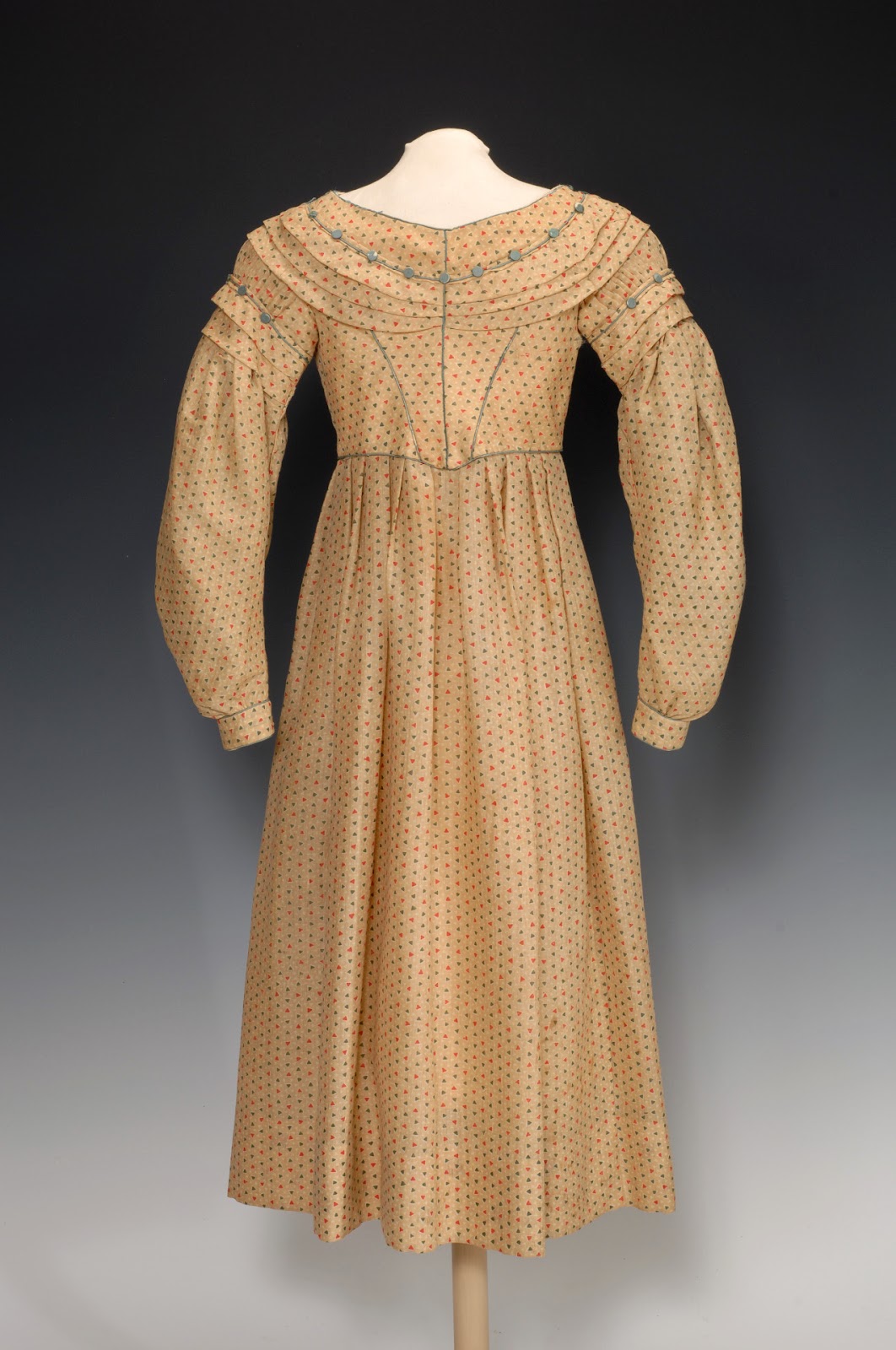 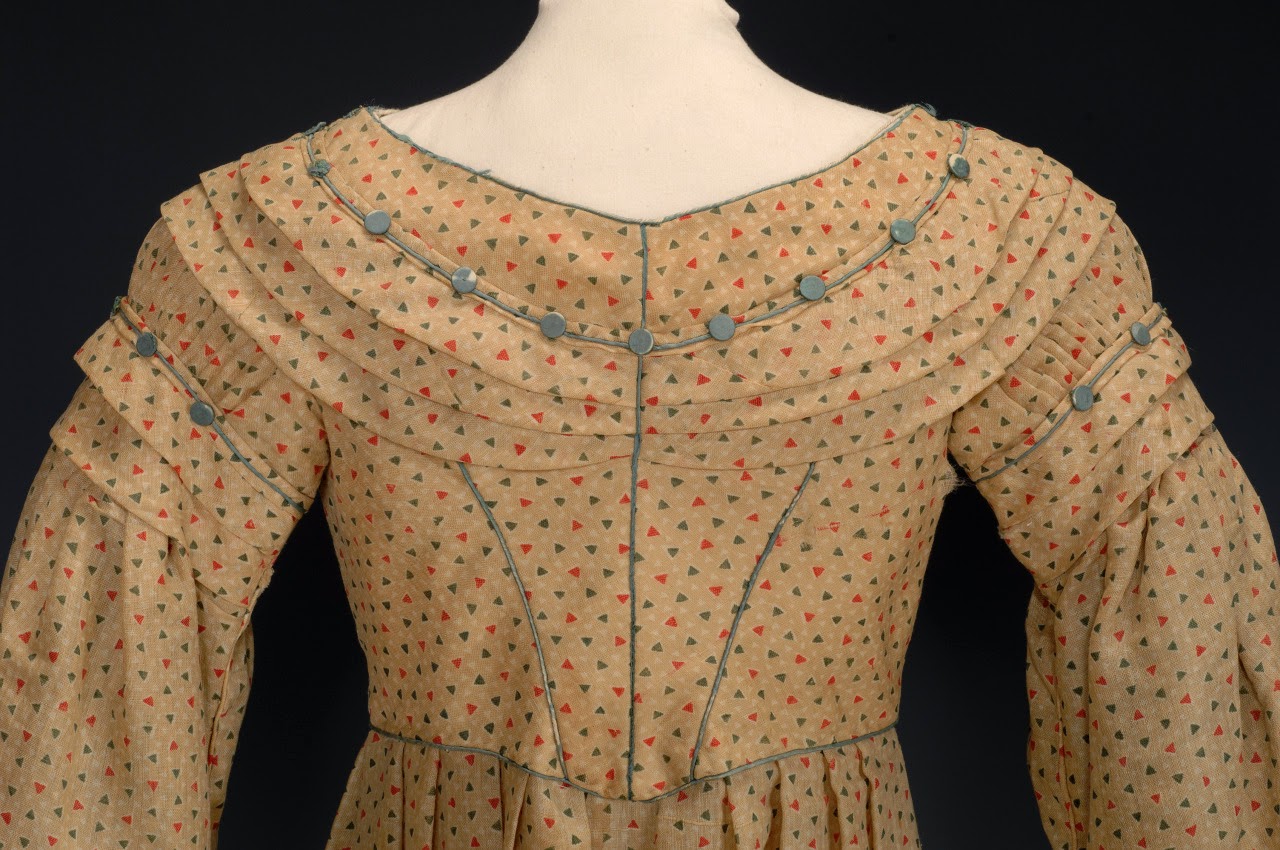 Blessings to the Fenimore Museum and their delightful young curator.  She posted this item recently on her tumblr blog.  Apparently the dress here pictured has a matching bonnet and pantalettes, that haven't been photographed as yet.  The dress was worn by Harriet Kezia Davis, daughter of successful hatter Benjamin Davis, of Cherry Valley, New York.  She was born on September 3rd, 1833, and died, sadly, not quite 10 years old.  This dress would have been worn by her close to end of her short life.  The dress is wonderfully well made, with excellent details that follow in a child's version the prevailing fashions for adult women.  I love seeing things of this sort when they have attribution like this attached.  You can very nearly hear the laughter of a child. 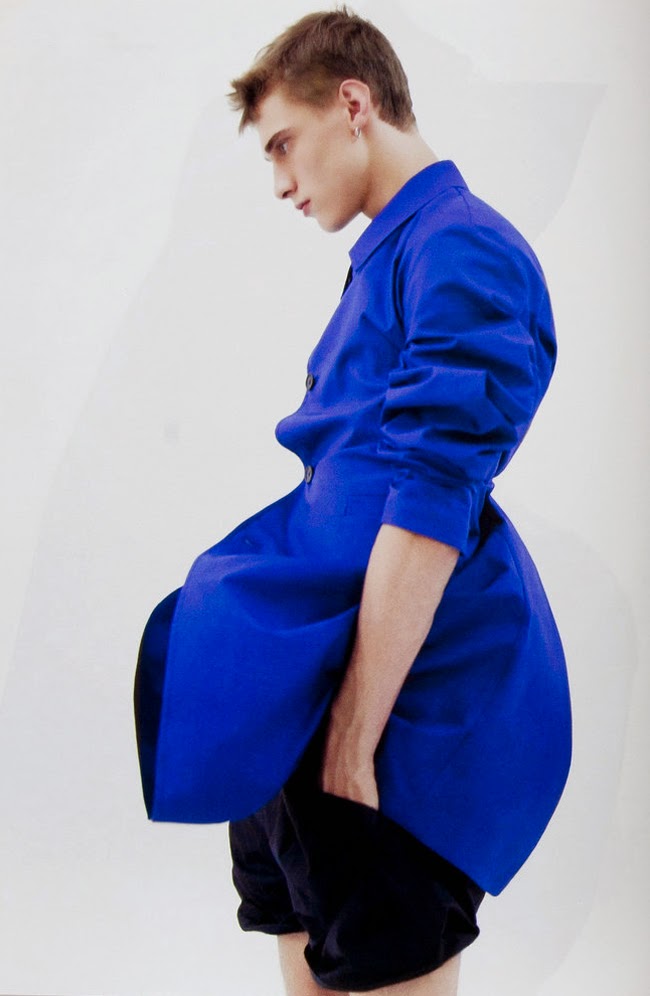 There are times when I get frustrated.  I can tell that this coat has an interesting shape to it, and that the lower half is somewhat bell shaped.  Just wish they hadn't posed it like that.  I want to know with more clarity what's going on.  How do those sleeves actually fit?  Where does the coat actually break?
I can answer my own questions, in theory.  The sleeves, from the amount of gather occurring, look like they are probably a normal wrist break length.  And the coat, if the top wasn't hoicked up, along with the lower half being skewed, I believe would be knee length.  It is my frequent frustration with fashion photography that, in the quest for an interesting image, all thought of conveying to a potential customer the reality of look and fit goes out the back door. Sigh. 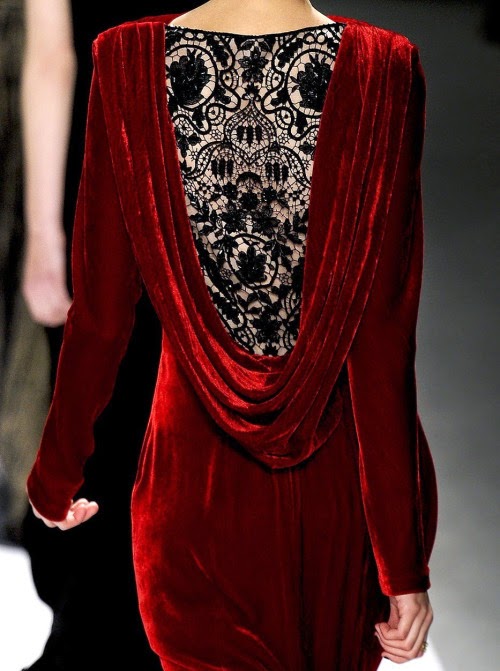 Two great details, two great textiles, mix them together, and you may come up with this.  There are certain arcs across the body that work, every single time.  One of them is this one.  The arc down to the waist point from the shoulder line.  Of course, worked up in dazzling red silk velvet the sweep gets a strong punctuation from the erotic glimmer.  Add that beautiful lace to fill the back and its like the frame for some exotic window.  The remainder of the design is serenity itself. these two details rule to visual story, and that's really quite enough.  More would make it an overstatement.  This is glorious. Sexy, and classy, and utterly timeless. It must be said by someone, so here goes.  Enough with the patches already! It isn't cool, or chic, or hip.  It looks sloppy, and is insulting as hell to people who don't have the wherewithal to buy new clothes every time they turn around.  There, I said it.  I feel better now. Thanks for indulging me while I rant. 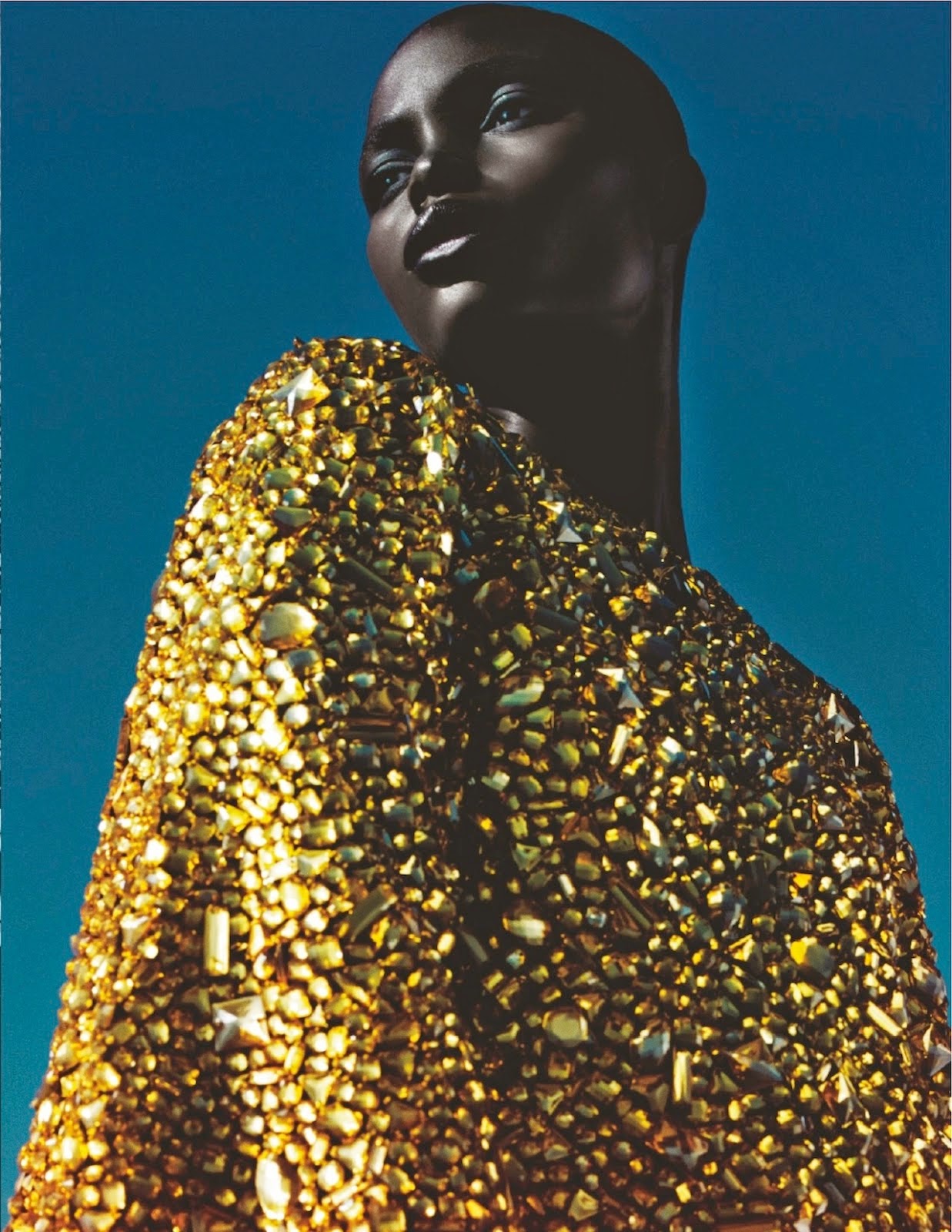 One of the other phenomena that has become a "thing" of late is the designers penchant for ladling on as many over scaled rhinestones as humanly possible onto a garment.  This image of Jeneil Williams turns her into some sever, unattainable goddess figure. She is endlessly beguiling, but you cannot capture her gaze, she will not condescend.  As an apparel item with real world application, not so much.  As an item of supreme fantasy, oh yeah. 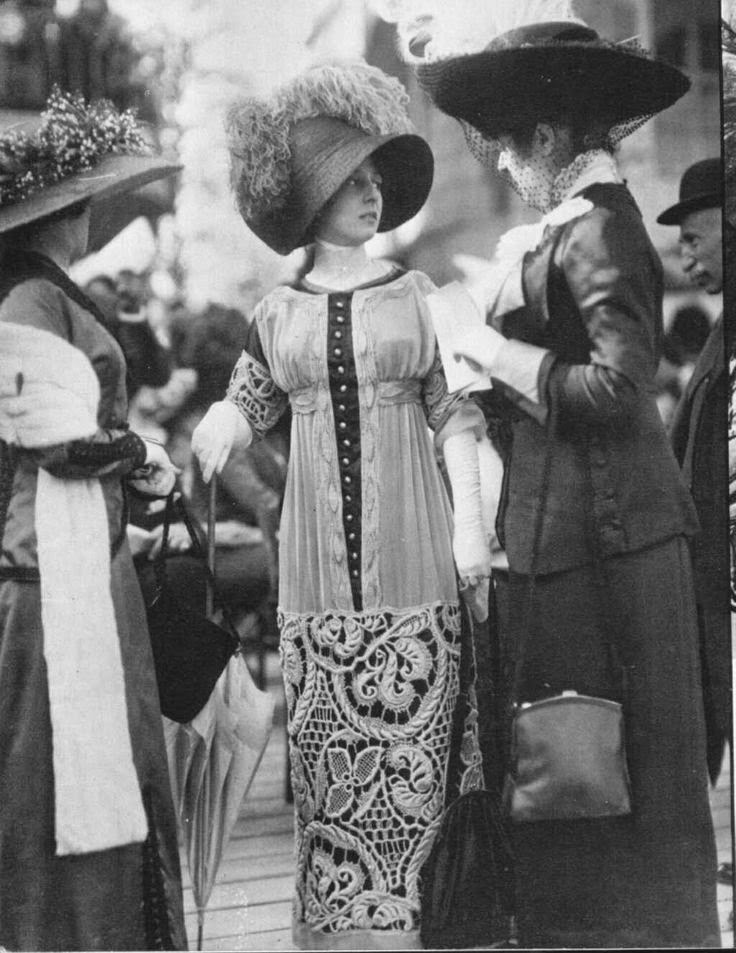 Rounding out my week's dozen this time, 1911, probably at the races, somewhere, where the number of ladies who looked THIS good was very high.  Poiret had already had his influence, so the silhouette had become distinctly tubular.  He didn't actually banish the corset, they still were in regular use, but the shape, and the tightness of lacing was dramatically different.  Everything was about creating an overall impression of length, and all of it leading upwards to those hats!  As vast as those crowns were, they were quite light, really.  Very often made up from wire frames that were covered with lightweight fabrics, even fully laden, they were rarely more than a half pound.  I've been fortunate enough to handle quite a few hats from the period, and earlier, and its always amazing how light they are.
Well, that's this weeks amble down my mind's narrow corridors.
Have a great weekend All!