That Seminal Moment in Time

I wrote yesterday about the mid 1800s and how much things changed. But, I wasn't done; not by a along measure.  You see, it was not just that women's clothes were, by technology, allowed to achieve dimensions they'd never reached before.  That was only a small part of what was going on.
Technology also created the possibility of colors that humans had only seen occasionally in nature before.  And the sewing machine meant that even middle class people could make clothes that spoke of far more affluence than really existed for them, making social barriers quaver, and shake, in the meantime. 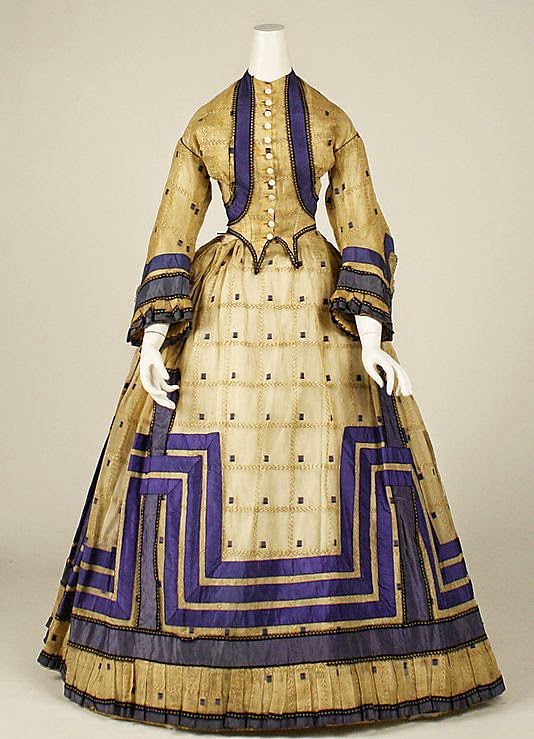 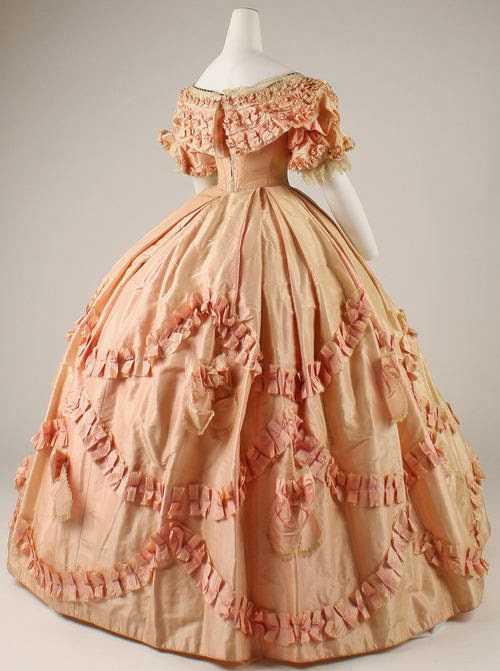 The end point was that across society it became harder and harder to know who was who, and where they belonged.  Because what they wore was not an honest indicator of status any longer.
But, at the beginning of this process, it was still clear, who was who, and who had what. The simple expedient of Volume told the tale.  If you could afford good quality fabrics in the amounts required to make the huge skirts of the mid century, you were at very least, middle class. 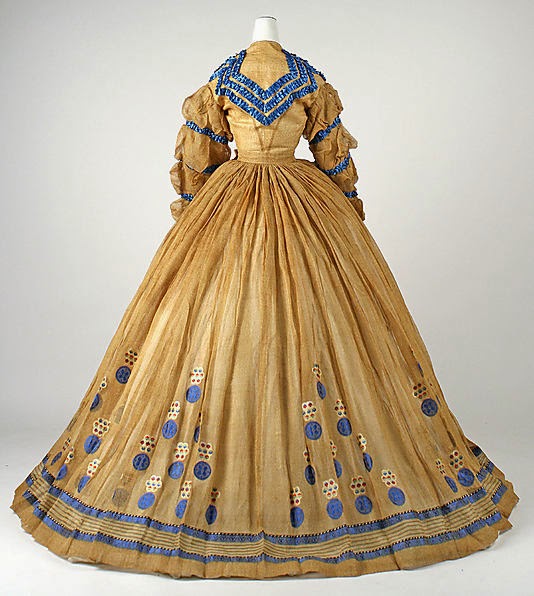 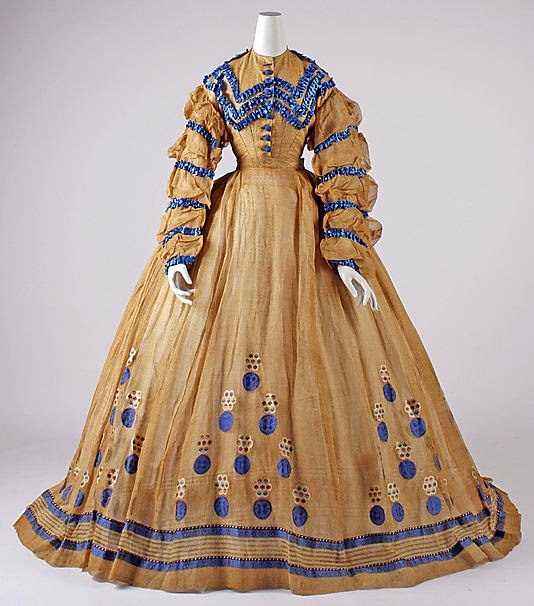 Its important to understand that prior to the 20th century, cloth was typically no more than about 24 inches wide, as opposed to the typical 45 to 54 inches of current times.  That said, a skirt for a dress could require six lengths of fabric, totaling 10 yards or more. (even for women who averaged only 5 feet tall)  So an afternoon dress could require 12 yards of material and dozens of yards of trimmings to complete. 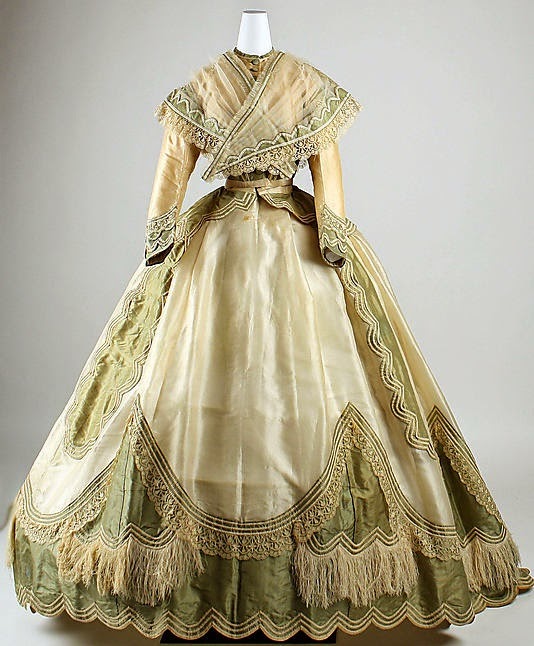 Dresses that were designed en disposition, could require even more fabric, since it had to go in one direction only. 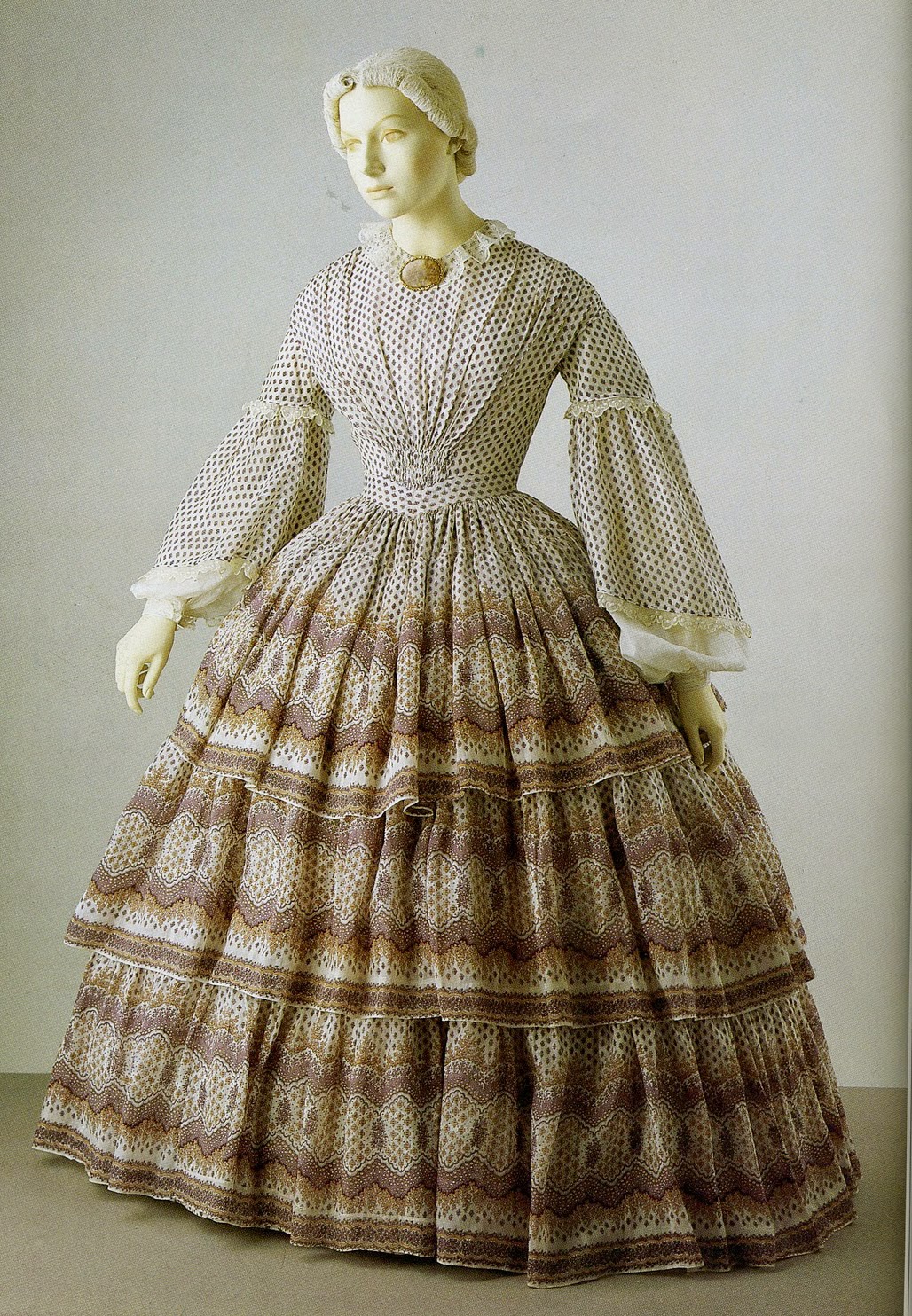 But however you cut them, however they were trimmed out, the women's fashions of the mid 1800's were the most extraordinary for the wild use of fabric, and the sheer volume they encompassed.
Certainly the later decades were lavish in the extreme, but the actual amounts of fabrics, and the trimmings used had diminished, with the scope of the skirts.  And this was right in line with the ever growing changes in women's presence in business, and other aspects of the outer world traditionally occupied by men alone.  As a connector to that, its important to reiterate that textile and trimming usage would never, ever, reach the same levels again for the middle classes, or even most of the wealthy.
It was a seminal change, and here, more than a century and a half later, we have no thought anymore about going back.