The world keeps a spinnin', and so does my little brain.  So here are are once again at the weekend and time for this edition of Scatter.
So, lets not waste time, shall we?  Lets GO! 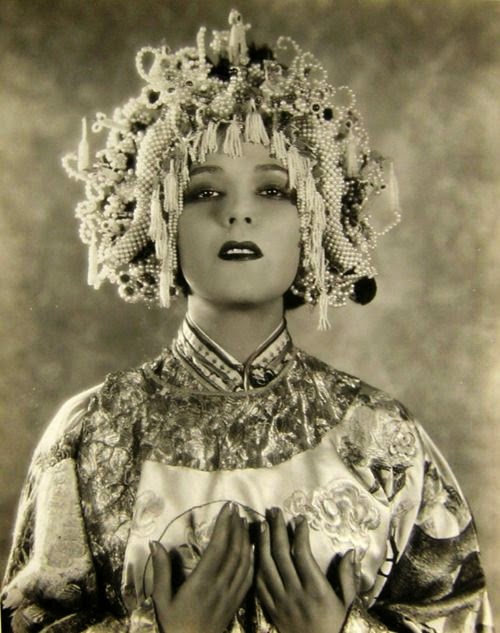 First up this week, is a silent film star, Simone Le Blanc all tricked out like some Chinese princess.  Of course, she's not really.  Though her robe does bear connections to Chinese culture, in fact it might even be the real deal, that headdress is hilariously wrong.  Not even an empress of China would have had a headdress covered entirely in pearls.  The general shape of it is correct, and elements that have been rendered in pearls are things found in traditional women's headgear, like the tassels.  But its really a confection of the studio's designer, and has little to do with place, or history.  Of course the single most serious misstep is her standard issue screen siren make up, which owes nothing whatever to China, and everything about making her maximally desirable to a Western audience.  All that said, its a marvelous costume, and gets the job done, admirably. 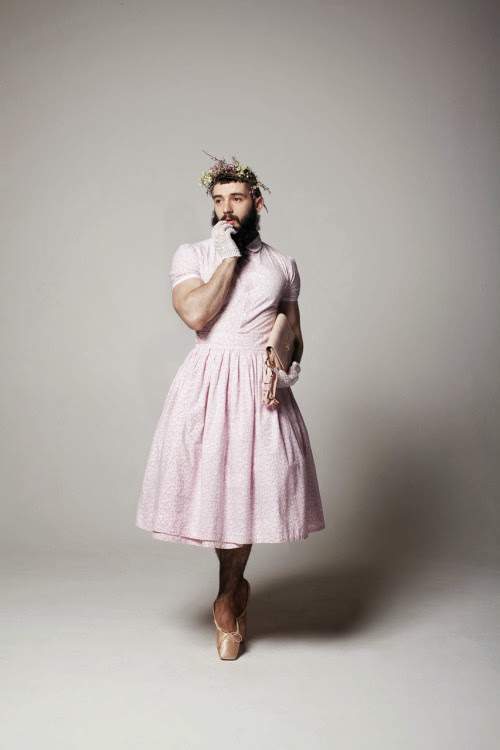 The juxtaposition here of a rather burly fellow, in toe shoes, and a pink 1950s dress and bag, just made me smile so much I had to include it this week.  Its often been one of the jobs of Attire to challenge our assumptions.  Its the totality of the image presented here that makes this challenge so powerful.  If, for example, the model was in traditional men's ballet costume, with toe shoes, we would give it little thought.  Or if he was in the dress, but barefoot, or in men's shoes, the message would substantively change.  But presented as it is, we are made to face the reality of a man's ability to manifest the same emotional presence as a woman, or to be capable of the same stereotypical behaviors we have ascribed to the female.

I have, more than once, posted jewelry created by the Indian people.  This is a kamarband, made in Northern India in the 19th century.  Its notable for two reasons beyond its physical beauty.  First its a splendid example of the high level enamel work of Indian craftspeople.  And second, the name kamarband, translated eventually into the English language as cummerbund.  Made of hinged plates of gold, the kamarband is set with diamonds, rubies and amethysts, all on a teal enameled ground.  And by the way, this is a piece of jewelry meant to be worn by a man, chiefly; over the tunic coat, and with a highly decorated knife or dagger tucked into it. 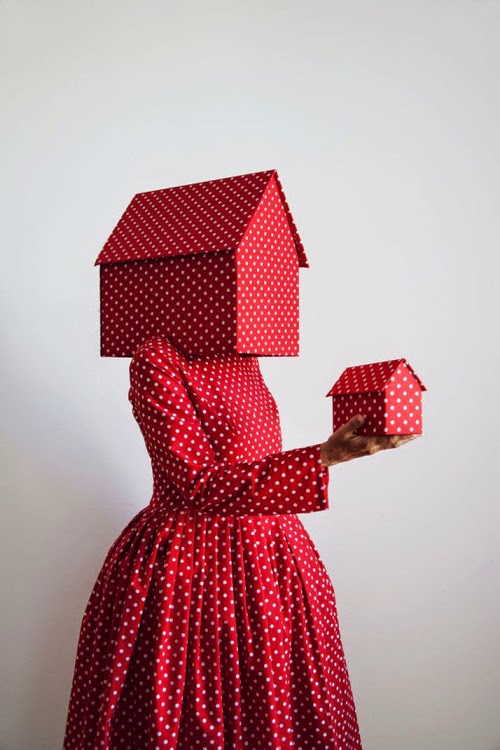 Apparel as literal art.  It happens frequently that the clothes we wear get brought into the world of fine art.  Its no surprise really that this should be so, considering what enormous weight and importance we give to dress.  I leave it to you to suss out what meanings you may from this image, but I had to include it, since its so intense. 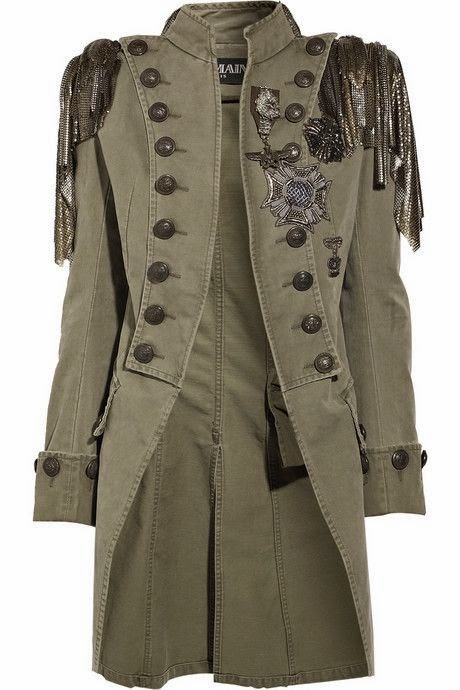 Oh dear.  Perhaps, just perhaps, we have dipped a few too many times into the steampunk well.  I'm all for doing costume, and all for creating a mash up of new, old, and untried.  Where this fails to hit the mark for me is the metal mesh epaulettes.  Both in proportion, and in general feel they add nothing to the overall look of the coat.  They seem slap dash, rather than intentional.  And whatever thing you are creating, for whatever purpose, there must be intention visible that can be read and understood.  It is true, of course that every time a new artistic view comes into being, like Steampunk, it instantly gets revisited, but most often by people who don't quite grasp the initial intent, and so it slides away from the first vision, becoming something usually lesser, and different. 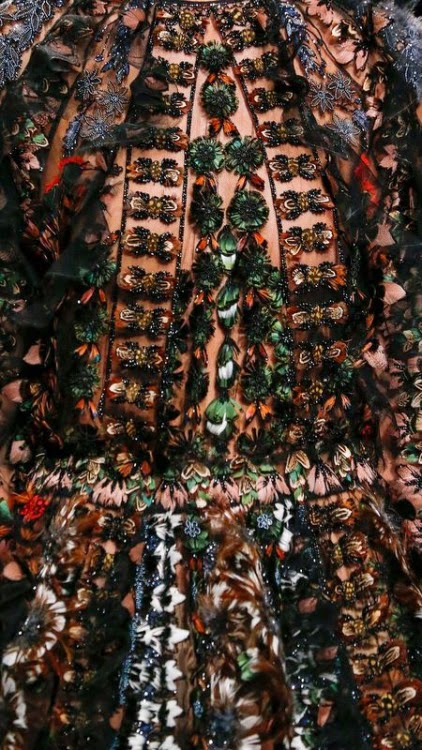 What made this leap out of the pile is not only the superb workmanship on display here, but the wonderful density of texture and color in this Valentino dress.  It manages to be both fragile looking and nearly armorial at the same time.  And the colorations bring a strong organic feel to a design that could go very rigid looking.  Plus I want to hold this in my hands and be able to really study teh work that has been done here.  Dazzling. 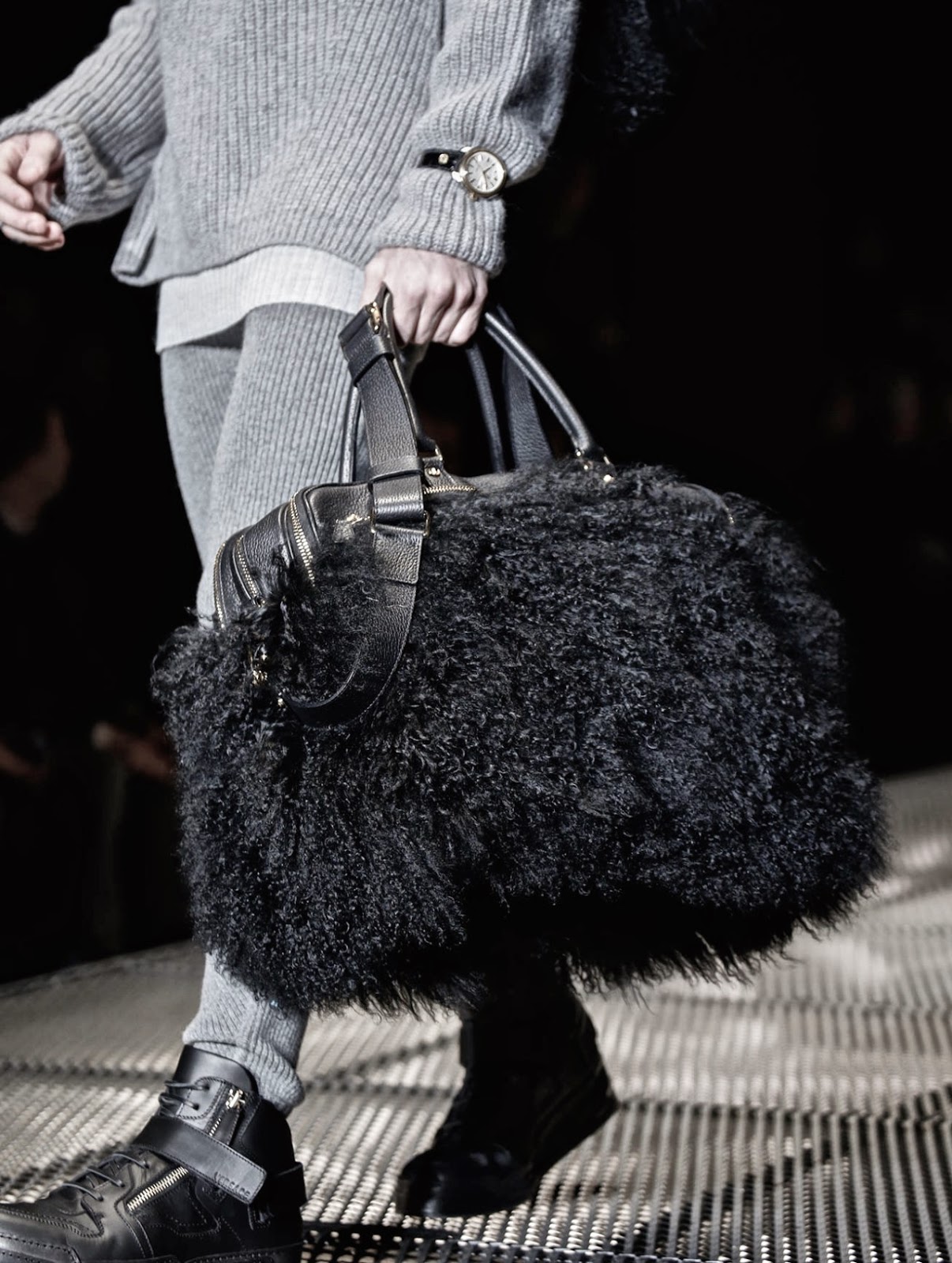 The man bag is ubiquitous now.  I see them everywhere, all the time, though I'm sure part of that is because I live in San Francisco.  But I gotta ask what amount of stuff does one need to carry in a single day?  This is a bag for a weekend away, not just being out and about doing stuff.  And I don't even want to think about what that un-sheared sheepskin is going to look like in short order.  But it does seem to be a growing thing, that of enormous, frankly gargantuan bags.  I carry a bag, typically, but I could put all the bags I own into that one, and still have room for all my stuff.  So, what does the growing desire for bigger bags say?  Is it simply a desire to make sure people notice?  Or is it something else? 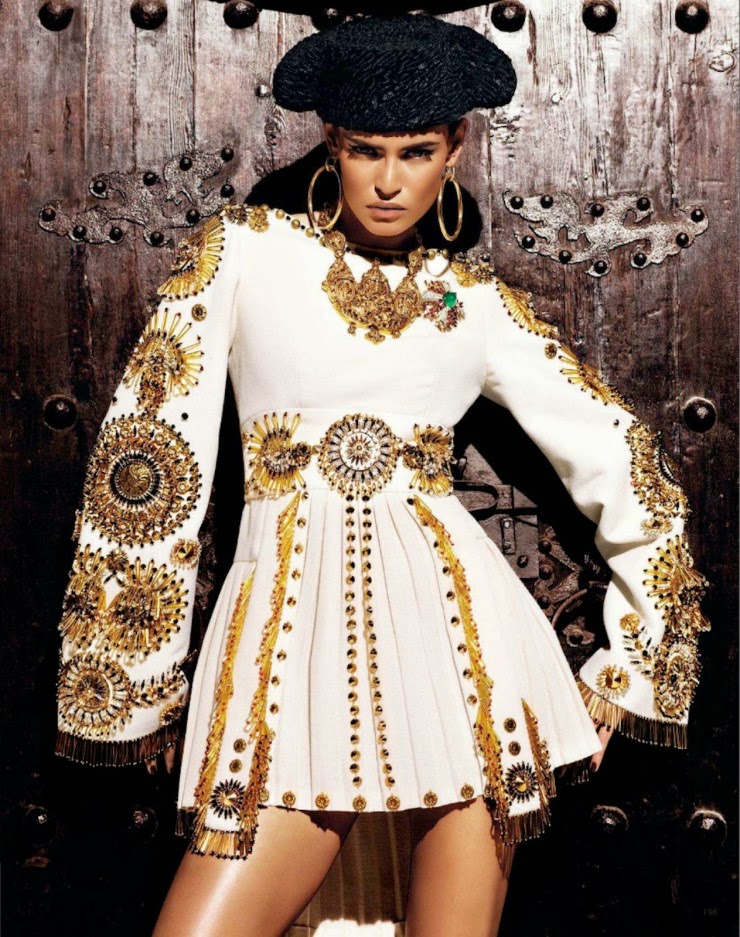 Here we go with that cultural mash up thing again.  Drawing inspiration mostly from the Spanish Trage De Luces, this dress takes the traditional forms of the embroideries of a suit of lights and , by translating those forms onto a different garment with different proportions and purpose, creates a new word, that expresses both the connection to the bull fighters of Spain, and also contemporary culture.  When the stylist added jewelry that refers to yet other cultures and times, the whole expressive scope broadens further.  The world in which we live will be creating more and more of these mixes of influence.  I, for one, am looking forward to it. 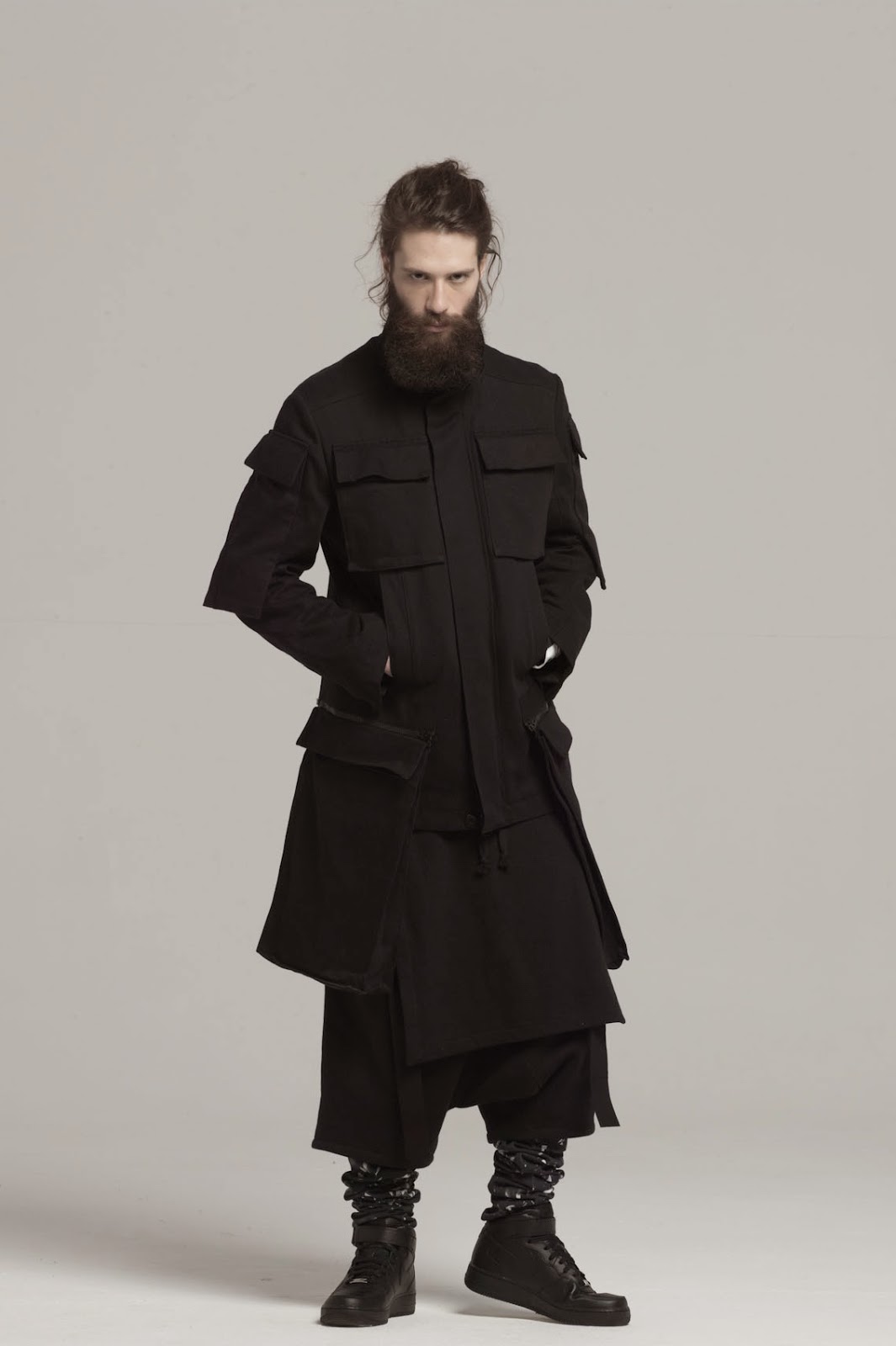 The goth influence continues to be a strong one.  And these days, when so many critical things seem to be going wrong both at home and elsewhere, the urge to get dark, and stay dark can be a profound one.  After all, we manifest in our apparel a myriad of feelings, thoughts, and processes.  It is natural that for some, the darkness they see around them societally, would make itself known all over their bodies.  And that this ensemble has a distinctly militaristic, and protective aspect, is also a natural result of the forces outside us, that we react to, all unknowing. 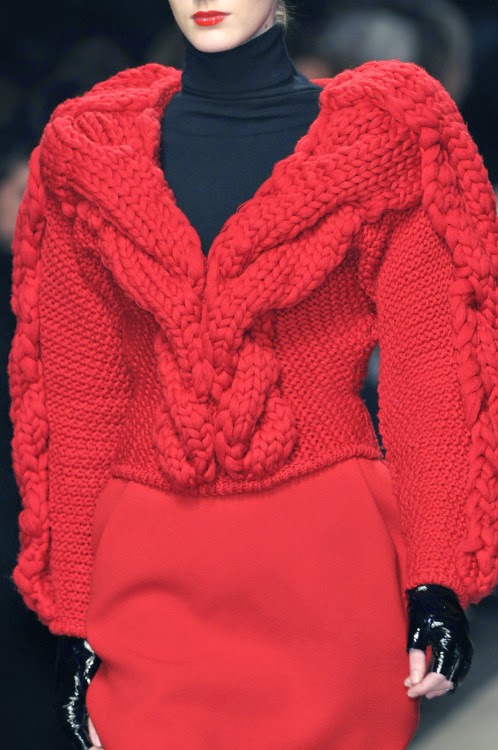 One of the things I love about knitted garments is the essentially organic feeling they can have.  In the case of this over-scaled jacket, the knit re-imagines the wearer as some kind of exotic animal, possibly a lizard or an extra-terrestrial being.  Knitwear can also play with scale in ways that its much more complicated for sewn garments to do.  In this case, the shape has been morphed into an aggressively broad shouldered one.  I also love that the strong texture and bulkiness is counterbalanced with a plain black top and a simple skirt, allowing the jacket to express most of what needs saying. 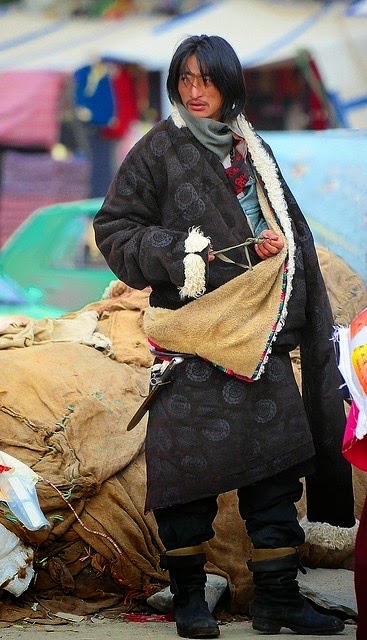 This young Tibetan man, has managed, doubtlessly without intention, or intellection, to create a visual statement of profundity, and complexity.  There is so much to be seen here, and even without understanding fully the meanings of the individual elements, the broader scope of the message conveyed comes through loud and clear.  At least, it does to me.  What do you see here? 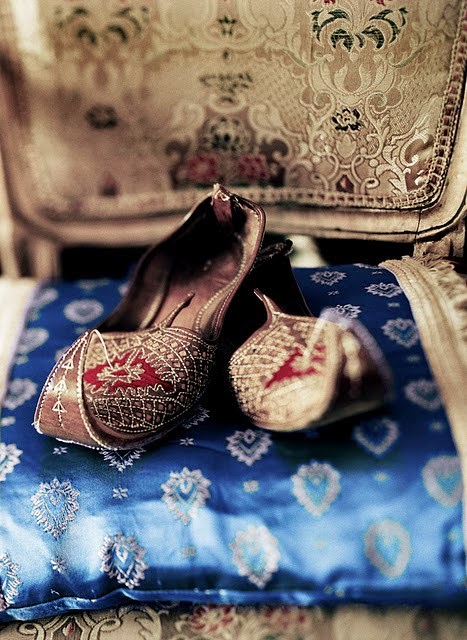 It is true that footwear is one of the most powerful subsets of the Attire language.  So much is this so that on sight, we get a whole range of thoughts, feelings, and notions, bursting into our heads the instant we see a set of shoes we can define in our minds as being of a particular place, or time.  This pair of Turkish slippers is a classic example.  Though we might not have the skill to see at a glance that these are Turkish, we associate them instantly with the Fertile crescent, and India.  We get a whole library of references, some of them likely inaccurate, because they may be from film or television.  But nevertheless, we get ideas blooming in our brains as soon as we see something like this.  The associations, are non-verbal, and inescapable.  We have been at this categorization process involving apparel, for longer than we have had written records, most likely.  So, its so deeply a part of us, it happens quite without our conscious thought.

And speaking of thoughts, I think I'd like to wish you all a great weekend, in fact, I know I do.  So enjoy you're fun times!  That's all for today.
Posted by Paul G. Ellis at 4:24 AM