For women who were of the middle classes and higher, during the 19th century, the activity of visiting was a huge part of the weekly routine.  Few women did daily visiting rounds, since even for the wealthy the upkeep of the household was of prime importance.  But three or more days of the week a woman was required by convention, and often by need, to get herself dolled up in her very best out of the house gear, and go knock on the doors of her friends and acquaintances.
By the time that the couture was born in the 1860s the conventions about how one should be attired were already firmly in place.  Since it was nominally daytime wear, and for public consumption, necklines were expected to be high, and sleeves to be long.  Beyond those few essentials a dress or suit for visiting could be as lavish, or as restrained as individual taste allowed, but it was expected that whatever the design, the quality would be of the highest one could manage. 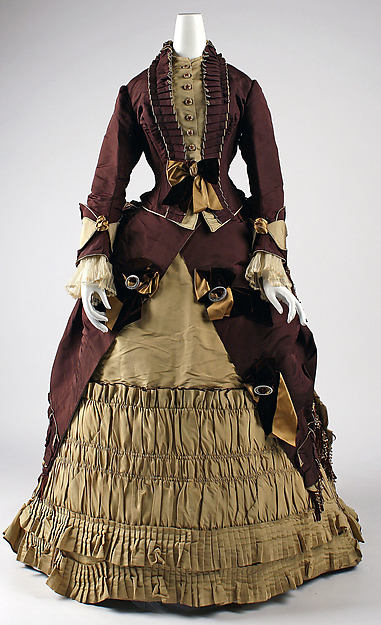 Here is a superb example of what I mean.  This design by Emile Pingat, is full to overflowing with high level dressmaking details, and superlative workmanship throughout.
Made in 1872, this dress is a transitional one, falling between the vastness of the crinoline and the out-jutting extremity of the bustle.  Worked in tobacco brown  and camel colored silks, with trimmings of gold silk ribbon, dark brown velvet ribbon, fly fringe, and crimped ribbons, the lady who wore this would have made an undeniably positive impression to the Victorian viewer. 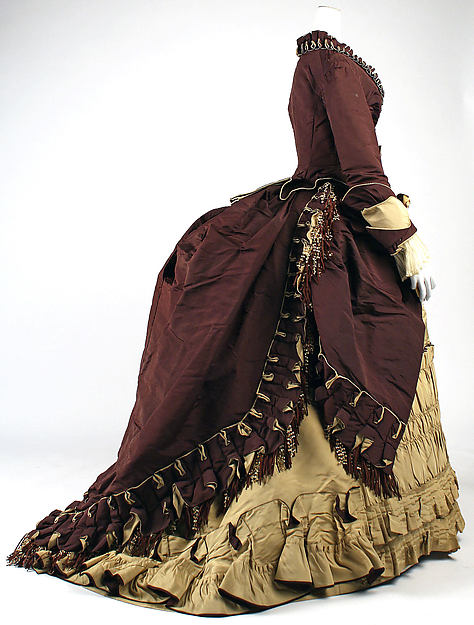 The camel toned silk skirt has two rows of knife pleated ruffles, with three rows of ruching above that, edged with another ruffle. 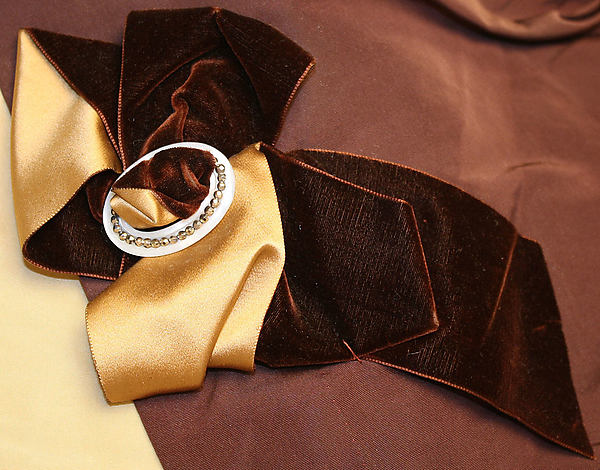 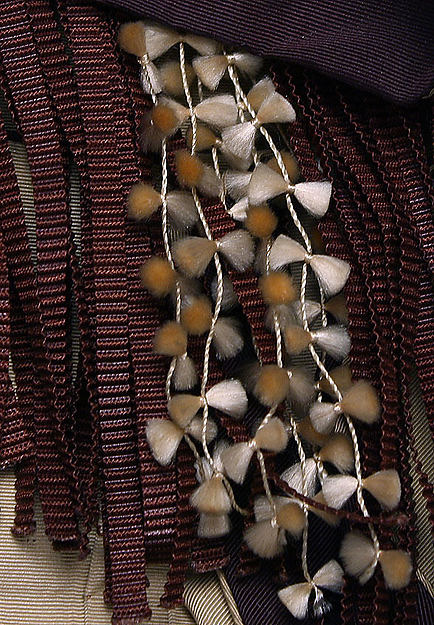 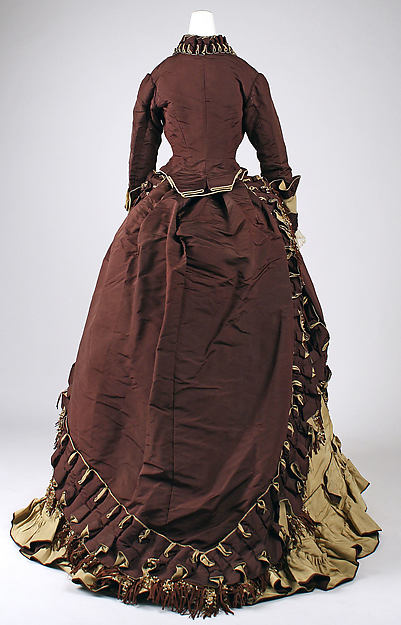 The asymmetrically draped over skirt of tobacco colored silk is pulled up in swags on either side of the body, and trimmed on the front opening with bows, each with a buckle set with paste stones.  The hem of the over skirt is incredible in its decorative complexity.  The broad band of trimming is of the same color as the over skirt, but lined and cored on the edge with the camel silk. That band is box pleated, with the pleats being tacked out to reveal the lining layer at regular points.  Beneath that is a layer of fly fringe clusters, alternating with groupings of narrow crimped silk ribbon. 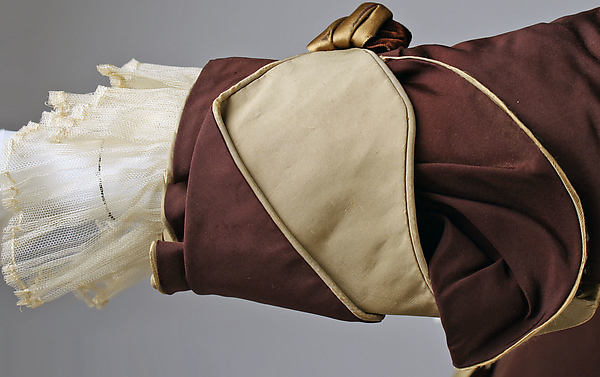 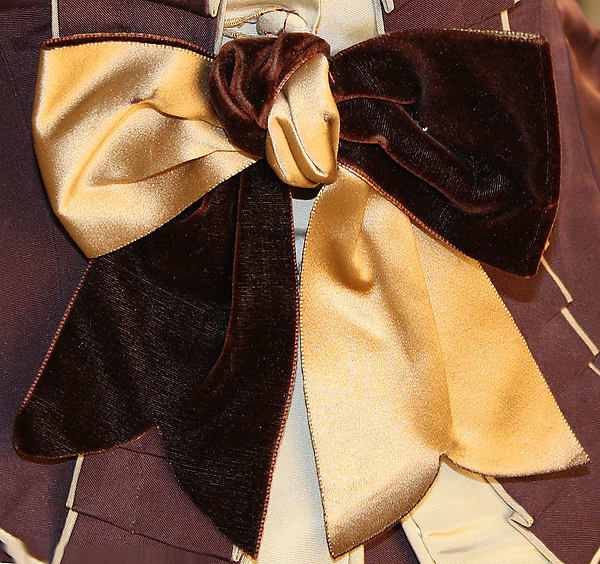 The shawl collared bodice is designed to look like there is a waistcoat under it, and it has a basque waistline to the hip point.  The box pleated band on the collar is worked in a similar fashion to the trimming of the over skirt, with the pleats being pulled out and tacked to reveal the lining.  Loosely fitting sleeves with huge cuffs are decorated with a contrast panel of the camel silk, and knots of the trimming ribbons. And the center front of the bodice has a large bow at the waist of the two wide ribbons. 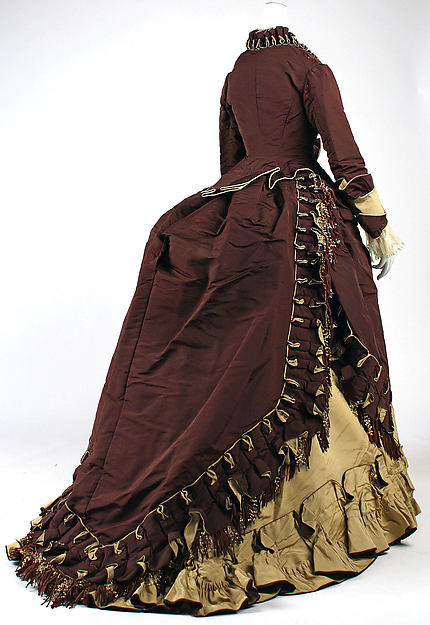 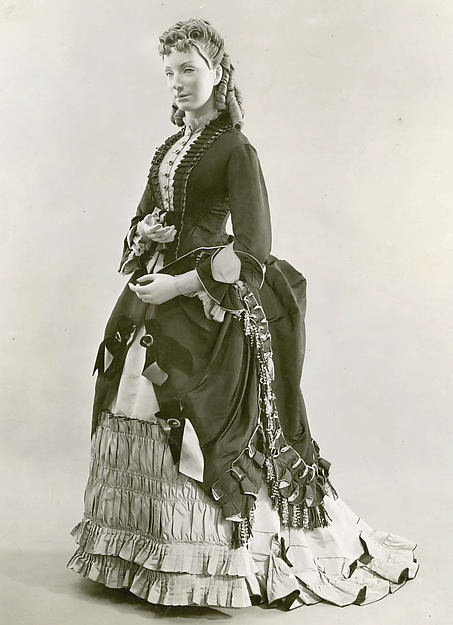 This dress is in superb taste, and would have marked its wearer as a person of fashion, who was not driven entirely by novelty. As such this dress would have made its wearer more welcome in the most rarified of homes.

Many thanks to the Metropolitan Museum of New York City for this astounding object.
Posted by Paul G. Ellis at 8:35 AM