I've taken a few days off from posting to re-charge the writing batteries, but I simply could not leave you all without your weekly edition of Scattertime Theater.  So, sit back and enjoy! 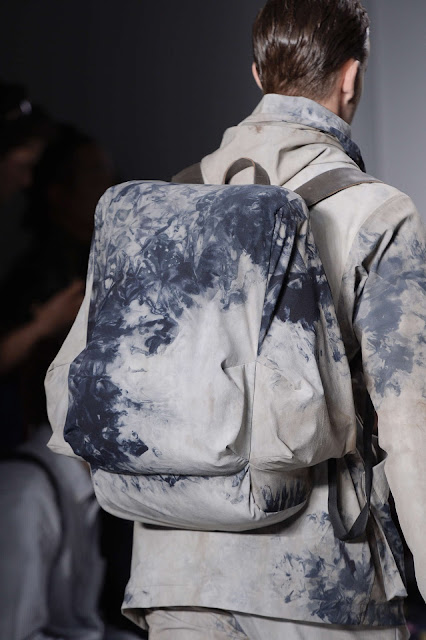 This first image got me thinking about our sometime desire to make everything match.  There's something compelling about the idea, and something that diminishes the total as well.  perhaps this desire to coat things with sameness is a way to more easily understand something and pretend to control it.  It also allows either the color or the pattern involved become the primary objective in the communication.  The personality of the person, becomes a secondary concern.  So in this case, it becomes all about the rather blotchy color randomly occurring here.  The person is a vehicle for it, only. 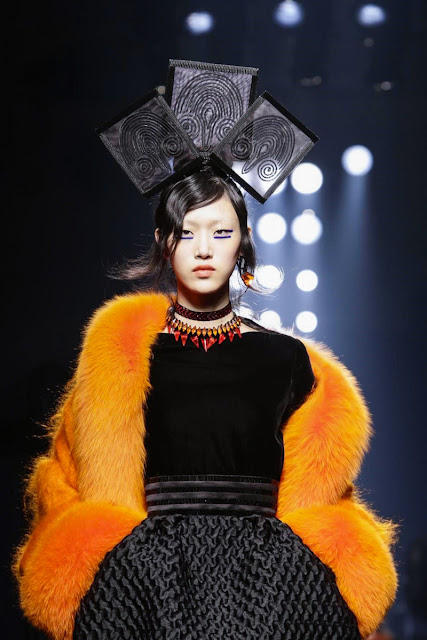 Jean Paul Gaultier. Surely he is one of my favorite designers.  Few out there have his combination of skill, vision and humor.  He always manages, while testing us with his edge, to remember that people want to be beautiful.  There is harmony here, counterbalance of texture and volume, and a few sly cultural references to spark the mind.  What really works so well for me here are two things.  The contrast between the luxe density of that orange fur, and the shiny ribbon basket weave pattern of the huge skirt is symphonic in its appeal.  The hat, with its three sheer rectangles, like cards from an arcane scrying deck, reminds me of certain Chinese imperial headdresses, and the pattern on it looks neolithic; so there is much to see and understand packed into a single accessory. 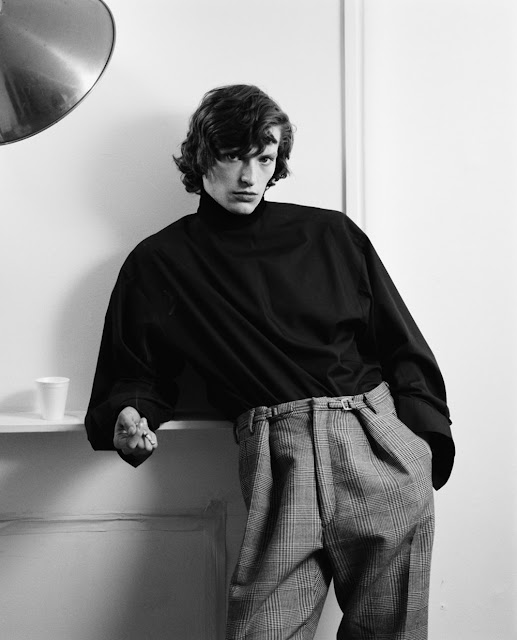 This kind of softness of approach is a relative rarity in menswear these days.  Its got a lot of appeal for me, though.  The rounder structure of the shirt, and the un-sharpened look to the pants, have a sensual ease that is bound to a sophistication that I like a lot.  Its a simple, but evocative manner of dress.  Its also a type of dressing that would be easy to reproduce at the RTW level, and could be very effectively employed by lots of different people.  Julius Gerhardt, photographed for Varon magazine. 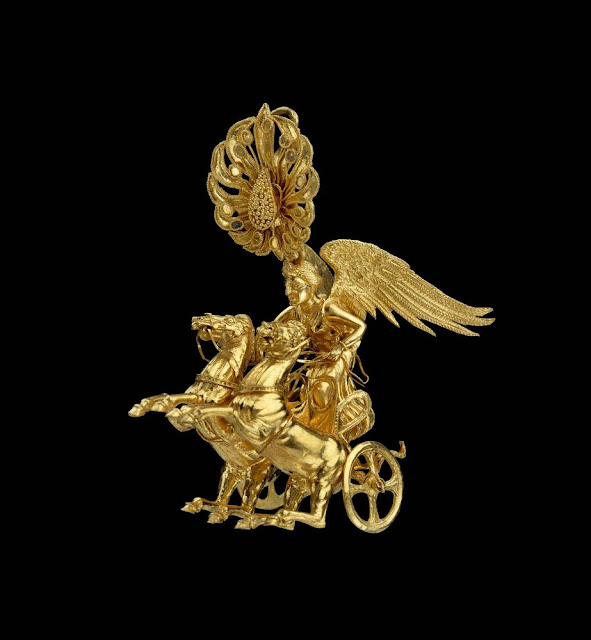 What we have here is pretty amazing.  This object is a gold earring, made in 350 BC in Greece.  It portrays Nike, commanding a 2 horse chariot.  Leaving aside the relative absurdity of a winged goddess needing to drive a chariot, its the design and workmanship that dazzle me.  Remembering that this object is about 2 inches tall in reality, means that the craft employed is of the very highest level.  The energy of motion in the design is wonderful.  The galloping horses, and Nike leaning forward, in obvious haste and focus.  Remarkable work. 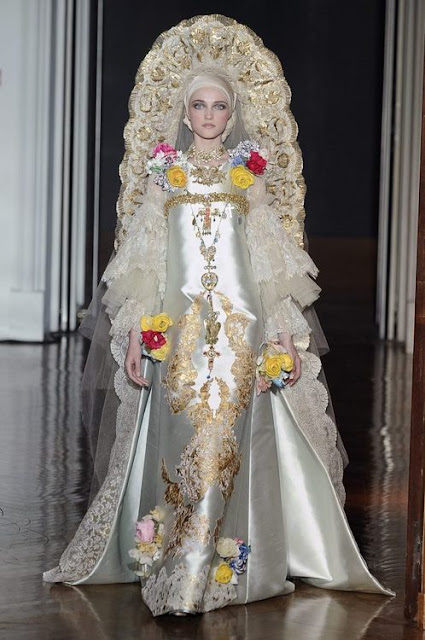 Another fave designer of mine is Christian Lacroix.  In this case he's taking classic religious iconography and playing with it to skewer the notion of the virginal bride in white.  He's turned the bride to be into a literal virgin icon. As a wedding dress, its an absurdity, as a piece of theater, and social comment, its marvelous.  One of the things I love about this Attire language is its ability to create satire and commentary in 3d visual form. 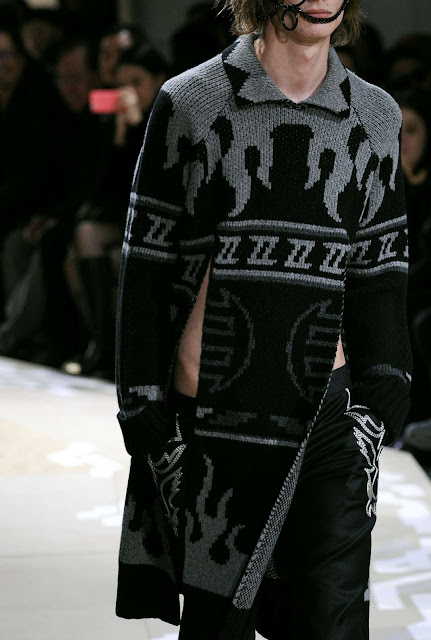 Sometimes I am intrigued by a shape or a cut or a proportion in some garment that I've seen.  This pullover sweater is by Christian Dada, and I really like the idea here.  The length of the sweater doesn't keep you from accessing your pockets, nor will it puddle about the hip line because the knit is riding up as you move.  Sure, here we are getting a glimpse of skin, which is rather sexy, but it would be equally effective with a shirt adding color to the mix.  I can also see this concept rendered in textiles of different sorts. It could be a very elegant evening item if made in a sleek solid fabric.  I'm getting ideas,.... 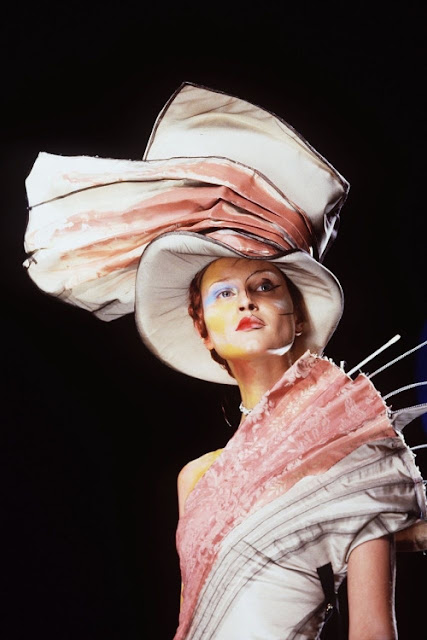 Since his expulsion form Dior, John Galliano has been working with Maison Margiela.  Whatever one might say about his politics, or his occasionally repugnant remarks, he remains a brilliant designer, with a unique vision.  To call this work painterly is both accurate, but also less expressive of what's going on that is needed.  There is surrealism here, and an almost two dimensional feel to the way its all presented.  I also love the presence of the boning protruding from the side of the shoulder, so that we remain aware of what kind of structure is needed to make things like this happen.  There is art to wear, and then there is art you inhabit. 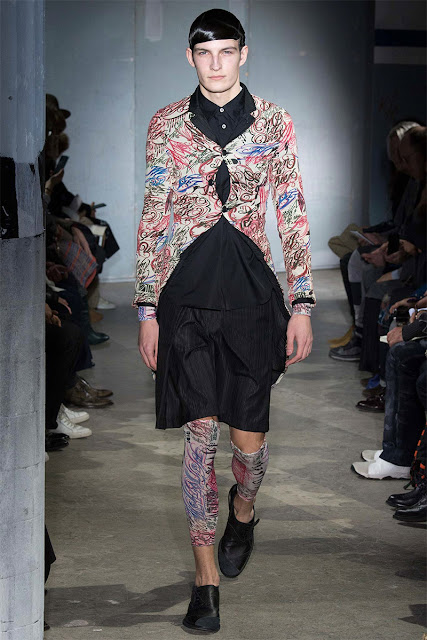 Here I go with the old Avant Garde thing, again.  Comme des Garcons menswear.  I won't always say that what I see makes me happy. This look really doesn't work for me much at all.  And I see very little that could be adapted to everyday life.  But what i do see here, is imagination. I see a attempt to re-think, and re-sculpt what we think of for ourselves.  Its an important thing, these experiments.  Without them, we would stay in the same place, forever, hidebound, and bland.  So bravo to C des G, and all the others out there who work hard to be, well,...out there. 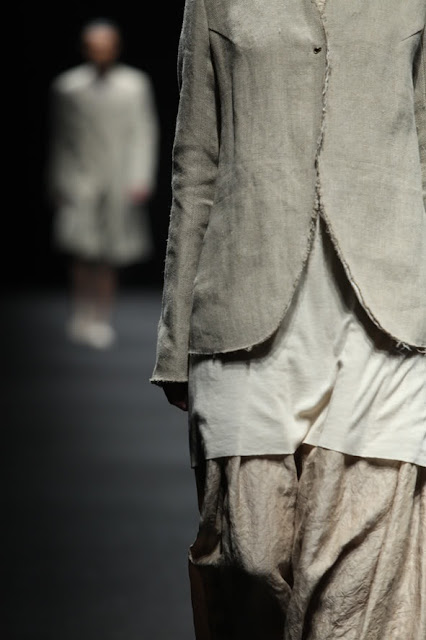 We have been flirting of and on, for decades now with this sort of deliberately unfinished, raw look.  And I have to say that, though I appreciate it from an intellectual standpoint, its not a look I would embrace myself.  What appeals to me here, though, is the very subtle, and effective blending of textures.  Its a high level of design though and process on display here, and the individual piece could each be utilized as part of other kinds of apparel remarks. 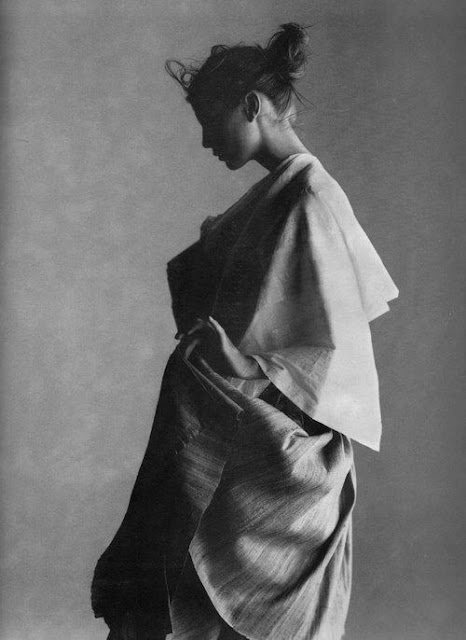 This is an image of a Yohji Yamamoto ensemble form 1998.  I'm just posting this here because its such an arresting image.  Posed as she is, with the volumes of the garments around her exactly as they are, she has stepped outside of time.  There are no references that give you a true understanding of the where and the when of this.  As such, this image is a tool to better understand what timeless apparel can look like.  There is an inescapable grace to this that will be just as powerful long from now as it was when this photo was shot. 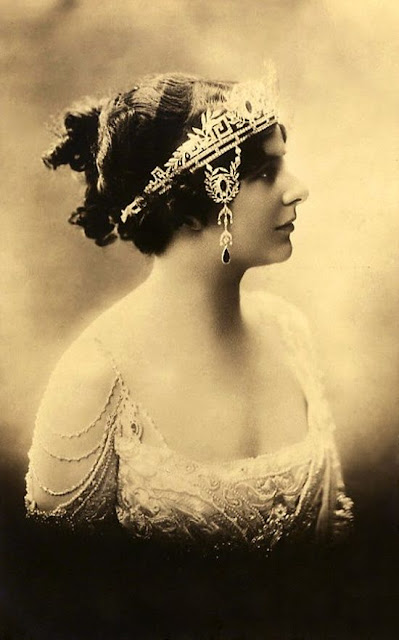 This Belle Epoque image is of a young woman wearing an extravagant evening dress and a massive and elaborate tiara.  Its interesting to me, because where jewelry does reflect the tastes of the time in which it was made, it often does so fairly subtly.  This tiara, designed to be worn low and forward on the brow, conforms to commonplace illustrations and painting of the Art Nouveau movement, that often portrayed women with low riding bandeaus, crowns, or turbans, frequently with large masses on either side of the face, like the pendants on this tiara.  Its quite a massive piece of jewelry, and would require someone with considerable presence to wear it well. 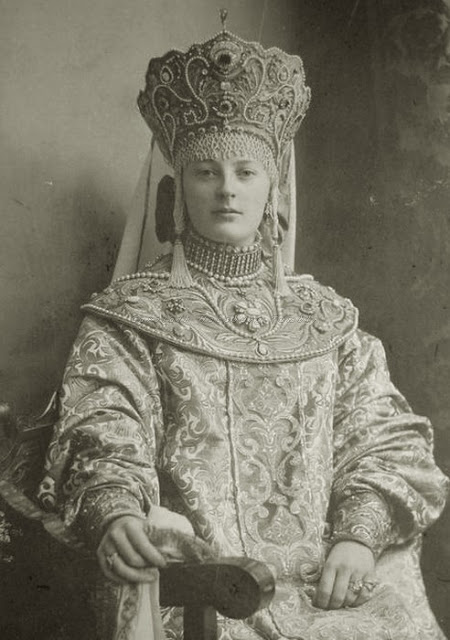 This last image is of Princess Elisabeth Dimitrievna of Saynm Wittgenstein dressed in classic Russian women's clothing for a Winter Palace ball that was held in 1903.  Though her dress here is slightly more elaborate than was worn in reality, its really only slightly so.  The kokoshnik headdress is very large, but not out of keeping with what was worn.  The amount of pearl netting and the pearl tassels, are also completely appropriate.  Ladies of the imperial court were permitted to wear traditional dress, such as this, to formal functions, or the official court uniform style of dress with its pointed, corseted bodice with long hanging sleeves, trained overskirt, and a tiara or kokoshnik.  I suspect many women chose the traditional dress form, since you could go without a corset, and didn't have to deal with yards of train behind you.   And yes, Stephen, this one was for you. (smile)

That's it for this week's Scattertime Theater.  Join me again next Saturday for another foray into my brainpan!