This is the final One Shot for this series.  When I came across this object in the Met's collection, it brought something to mind.  For over a thousand years, actually closer to 1700 years, garments very much like this were the essential item for anyone in the Western world.  Whether you were lowborn or high, you had a shirt similar in shape and construction to this one.  If you were a plain living serf, your shirt was un-ornamented, homespun ,and was very likely your only clothing. If you were wealthy or titled, your shirt might be one of many you owned, and richly decorated.  And the difference between the shirt of a man, and that of a woman, was a matter of length, and to a lesser degree, type of embellishment.  But the basic garment, the square cut shirt,  remained virtually unaltered by time for nearly 2 millennia.
A square cut shirt is one where in all the component pieces are rectangles of one measure or another.  It started out that way simply because the art of cutting close fitted pattern pieces was still nascent.  But once it took hold, its simplicity of construction, and the lack of textile waste, made it spread across Europe, and stick fast. 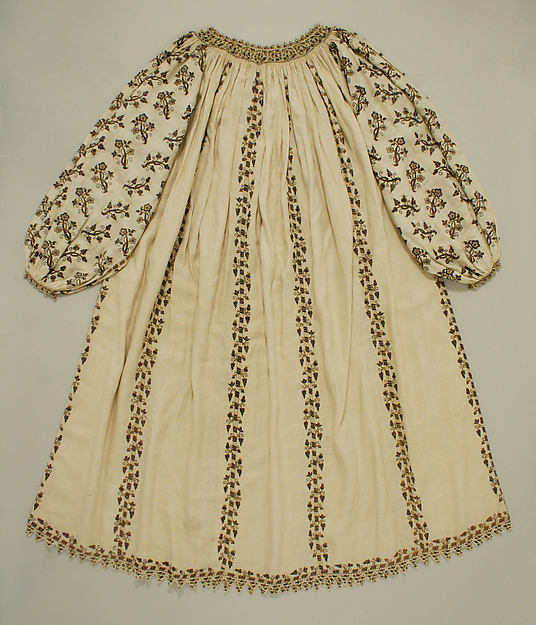 Front of shirt
This shirt is from the late 1500s, and made for a woman of substantial means.  The indicator that this was a woman's shirt is really all about the manner and placement of the embroideries.  A man's shirt would be free of embroidery on the sleeves and body, but could be richly worked on the collar, cuffs and placket.  You can see in the images of the front and rear of the shirt, that there is really no difference in shape, or decoration. 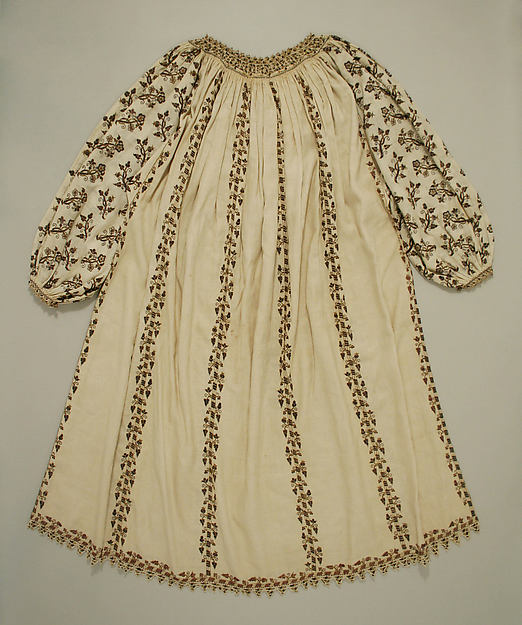 Rear of shirt
The decoration was originally black, but it has faded to an eggplant purple over time.  The work is done in padded satin stitch and gold wrapped thread on the fine woven linen of the body.  The hand worked Reticella lace of the collar and hem is made with cotton, black silk floss, and gold wrapped thread.  This is without question the shirt of a very wealthy person.  Its very survival is a partial testimony to that. 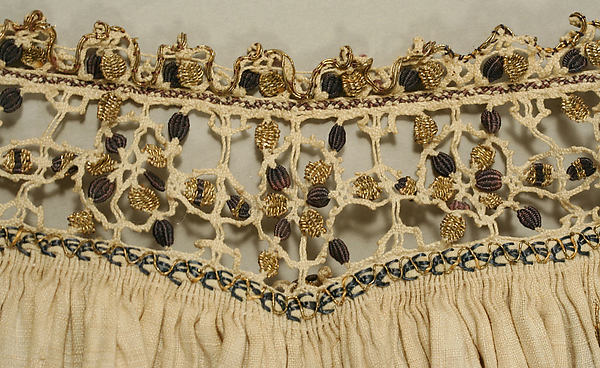 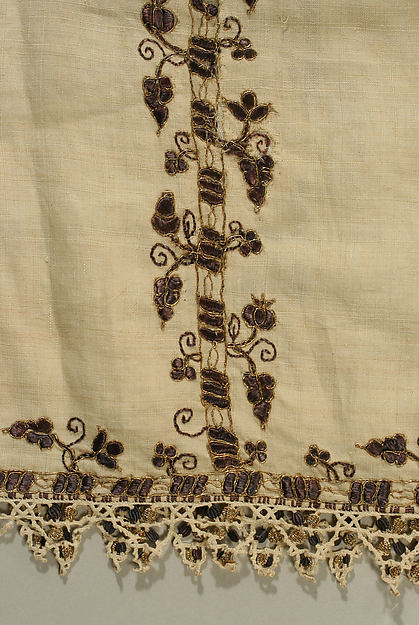 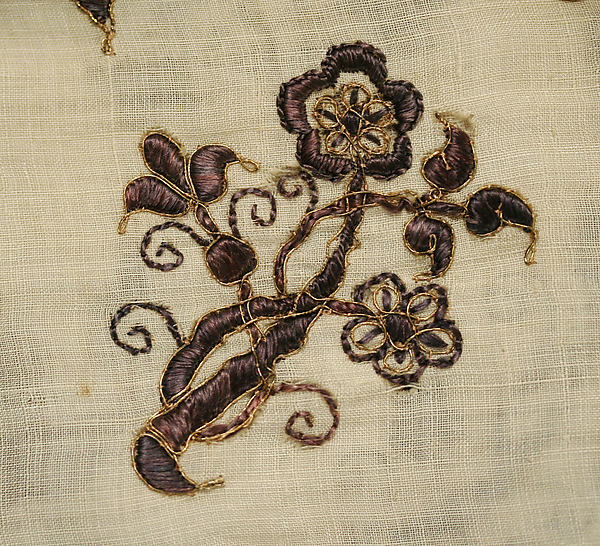 The other really important point about the primacy of this kind of garment was not its ubiquity, but the fact that the entire ensemble to be worn, used this as its base.  Even moneyed people slept in their shirts quite often, getting up, and then clapping on whatever clothes they were going to wear, right over it.  And those less affluent fell asleep in their shirt, woke in it, put on their shoes, and went to the fields in it.  We have no analogous item in the Attire language now, within the Western culture world.
By the end of the 18th century, the appearance of ready to wear clothing, and the movement away from agrarian society, caused this sort of shirt to fade out of use, evaporating completely by the beginning of the 20th century.  So very odd really, that something we held as vital for nearly 2000 years, could vanish so fast.
Posted by Paul G. Ellis at 8:08 AM