Welcome back for another edition of Scatter!  Its been an interesting week, and I have some intriguing things to share, so let me get on with it. 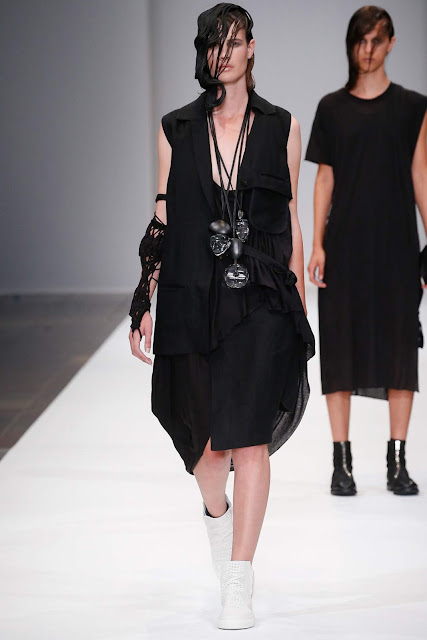 Starting off with something Avant Garde here. This is the work of Barbara Gongini.  Its often difficult, even for me to edit out the runway styling details that take away the focus from what is an otherwise interesting and possibly appealing garment.  Such is the case here.  When I expand this image and really look closely at what is going on with the structure, I can see the intention, and the relative success of this effort.  Its the hair, and jewelry that creates a feeling of confusion.  But the experiment itself, is a worthy one. 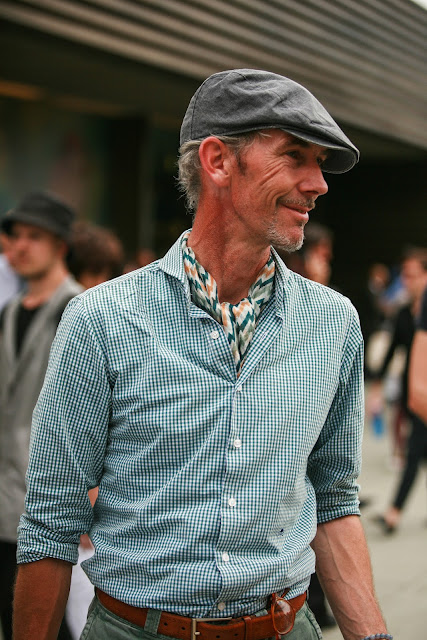 I'm posting this because this is such a great example of how real world attire can work, when its thoughtful.  The individual elements of this statement are none of them extraordinary, and the desired effect is not meant to be a shout, just a normal tone of expression.  But the unity of the whole is wonderful. Its ultimately the scarf that brings the whole grouping together into a cohesive phrase.  This isn't master class dress, this is just considered well.  Bravo sir, whoever you are.  The colors in combination suggest balance. The warm and cool tones are in perfect relationship.  The textures are all of them easily understood, and welcoming.  And the fit of the clothing is neither too tight nor too loose, so the final read becomes one of easy approachability that is certainly supported by his sunny smile. 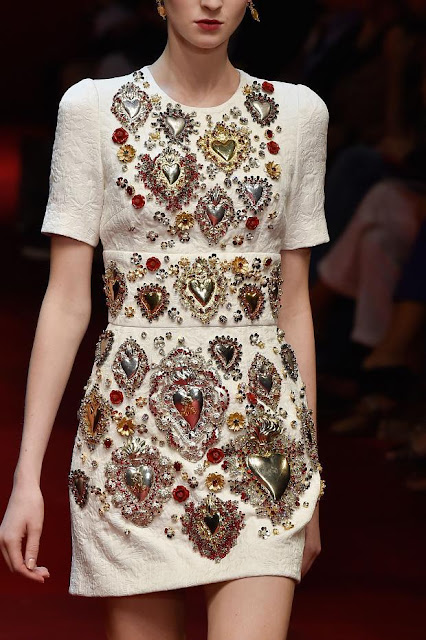 Religion continues, even though more and more people eschew it, to be a potent design influence.  This Dolce & Gabbana dress is fairly covered with differing images of the Sacred Heart.  It will be interesting to me to see, as the years roll along, if the presence of such imagery in Attire design wanes, along with people's attachment to deity.  Apart from the religious symbolism, I must say I am not sure this entirely works.  Largely because of the placement of the hearts.  Clearly the heart centers are rigid plastic of possibly metal, meaning that sitting down could be quite uncomfortable, as those shaped plates dig into your thighs or abdomen. 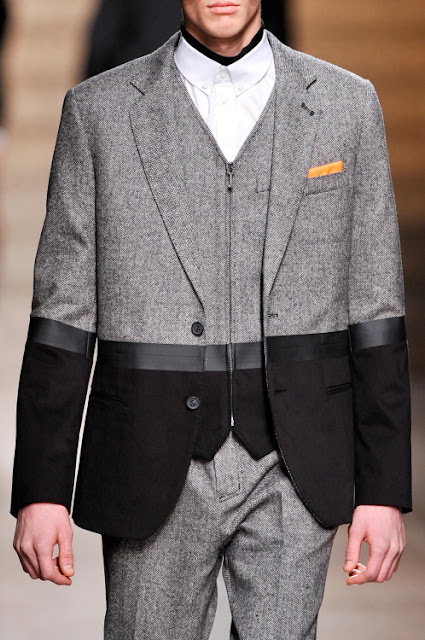 Here's an update on the 3 piece suit I can really get behind.  The zipper on the vest makes it far less formal, but the horizontal piecing with the two other fabrics makes it a completely unified and polished direction.  I like too, that though this is a suiting wool, its been handled with looser tailoring so the feel is more casual, without being sloppily so.  I could see this kind of take on the suit working its way into the mainstream, for those souls who still MUST wear a suit every day.  Its a worthy attempt to keep the usefulness of the suit alive in our ever more kicked back, chill society. Frankie Morello FW 2013. 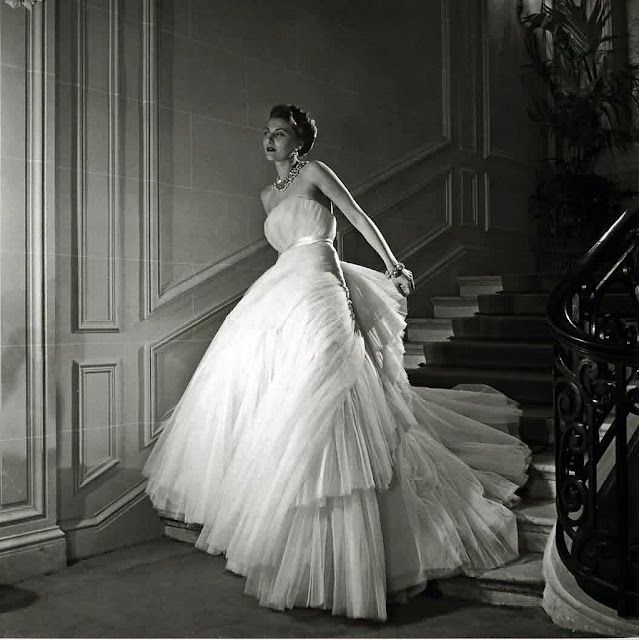 In 1950 Christian Dior did a series of ball gowns, each inspired by a particular composer. This dress was inspired by Schumann, and to my mind perfectly exemplifies the romanticism of his music. Photographed on the main stair of the Dior Atelier in Paris, Schumann is a confection of silk tulle, masterfully handled with ruching, gathering and pleats.  What I also love about this image is that the model is neither as young, nor is she as slim as current tastes demand.  So that too, has changed over time.  A house model, like this one, was expected to be reasonably trim, but still able to reference the body type of the house's clientele. 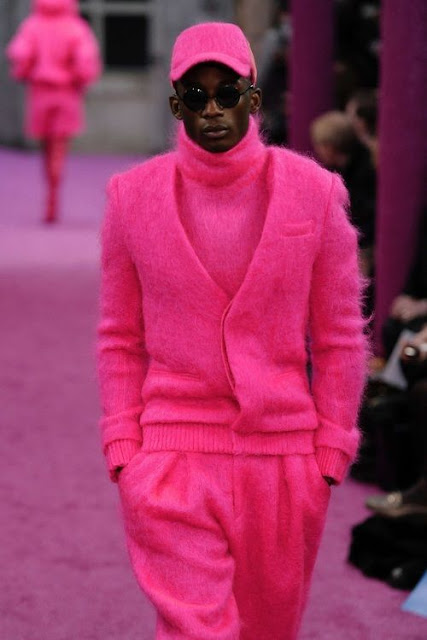 I actually like all these pieces for their cut and texture. Would I be caught dead wearing that much hot pink?  Nope.  But its not the intent of the designer that we do that.  I could, however, see this made up in some more sedate color working quite well as a very unified method of city dress, that still has the simplicity and comfort level that seems to be the primary goal.  Also, I like the idea of softening the menswear shapes.  We don't need rigidity to be acceptable.  This design by Fyodor Golan really appeals to me, especially the jacket, which is a mash up of a blazer, a baseball jacket and a sweater.  I could see jackets like this making a significant entrance into the conversation.  Probably not in hot pink, though. 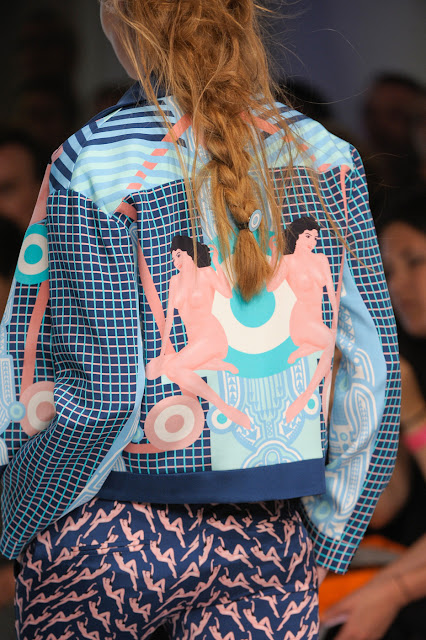 I love it when design becomes playfully satirical.  And when that design work is also immaculately done, as this is, it makes me even happier.  This is the work of Holly Fulton, who likes to mess with us slyly with her graphics. In this case, nudie pants and jacket combo.  Because the images are so stylized, we cannot see it as vulgar, exactly, but we are being challenged.  That the clothing is designed to be worn by a woman invests it with a same sex spin, or at very least a staunchly pro-woman spin. The result here is that we have much to ponder, which is a wonderful thing for clothing to make us do. 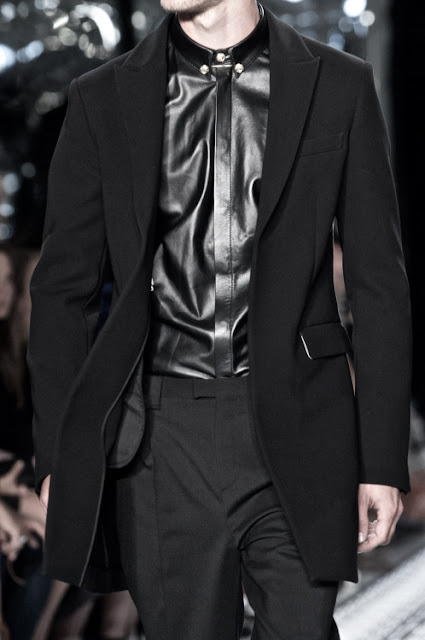 I seem to be presenting a lot of contemporary takes on men's suiting today.  Okay, why not?  Versus S/S 2015 Menswear. Keeping with what I mentioned earlier, the shapes are looser, and more gently fitted, which will appeal to many out there, me included.  I love the combination of textures, from the glossy leather of the button down shirt, to the gabardine of the pants and the heavier wool melton of the coat.  As the suit breaks apart, I see more and more of this sort of pieced together thing becoming the norm.  As well, it becomes possible to have greater versatility with fewer pieces in the wardrobe. And as clothes of quality continue to soar in price, that is a very good thing. 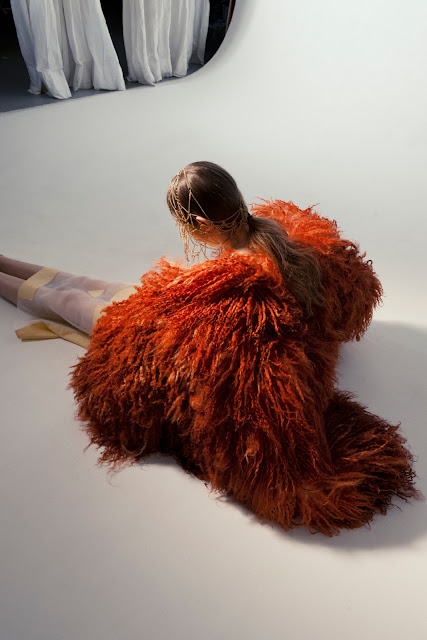 The power of color and texture in combination is amazing. They become greater than the sum of their parts.  This brilliantly orange wool coat is a virtual sentence of Attire all by itself.  Surely, whatever else one wore this with would need to be very carefully selected, since this coat is such a loud remark.  But the desire to reach out and touch this would be nearly irresistible.  Certainly all eyes would be drawn to the person in this.  So if you have divadom in mind, you could go here. 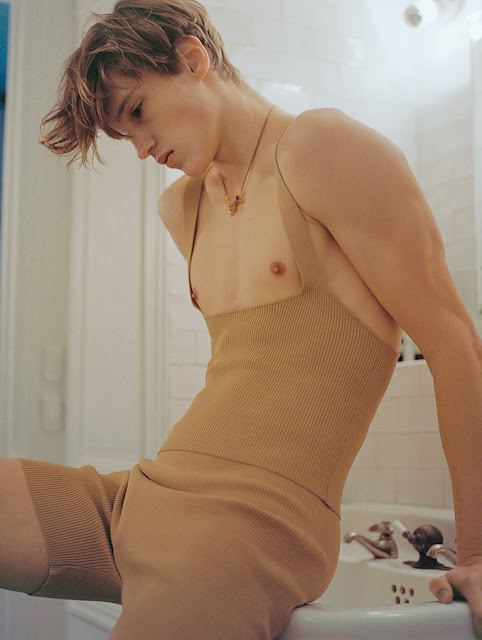 Varon magazine produced this image for a shoot in a recent issue.  Its almost got a classic pin up quality to it. Its certainly meant as a deliberate tease.  The two garments being shown are fine in their own right, but what makes this interesting to me is how the photographer and stylish managed to make this a monochromatic seeming image, and to counterbalance boy sex kitten, with something curiously sexless. 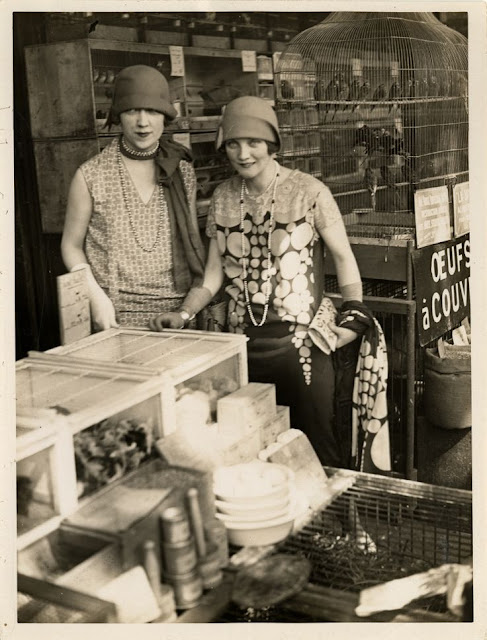 1925, Paris, a pet shop.  I fell in love with this image because its what women really dressed like in the 20's, not some tarted up version, or a posed studio shoot.  We get a great look at the tubular shape that was the norm, and of how women actually accessorized that style.  The woman on the left is wearing what appears to be a cotton print dress. They were very popular everyday choices, and she is staying true to the fashion magazines, with her combination of knotted scarf and long necklace.  Her companion is in a very stylish town suit of matching coat and dress. For me, the long necklace adds nothing to what she has on, since the dress has such a bold print.  Chanel would've told her to lose the necklace before leaving the house. 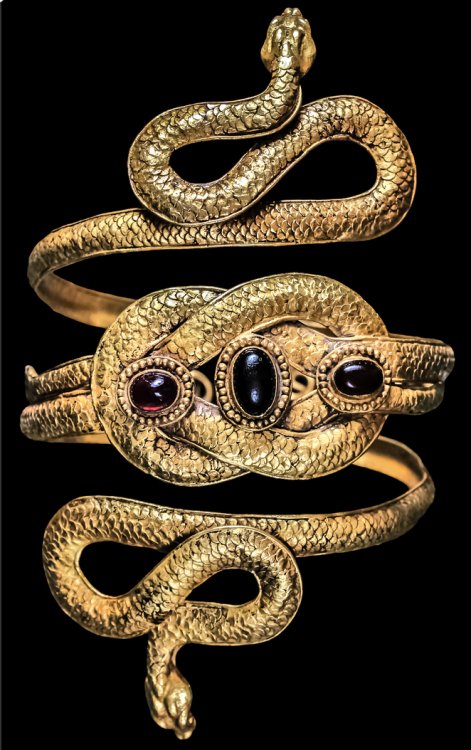 There was such extensive trade within and between the Greek and Roman civilizations, and the surrounding nations, that it is actually hard, looking at an item like this, to be certain of where it was made.  The prevailing tastes for jewelry made snake bracelets like this one spread across half the known world.  This gold bracelet presents two snakes, twined in a Heracles knot in the center, with three oval cabochon garnets.  It is believed that this is a Greek piece, and that it was made sometime between the 4th century BC and the 1st century AD.  Its utterly wonderful in  every respect. the design and workmanship are of the highest order.  This would have been for someone very wealthy indeed, probably nobility.

And that, my friends concluded this weeks Scatter.  Now scatter yourselves out into the world and have a great weekend!
Posted by Paul G. Ellis at 4:10 AM