This Offer Will End!

This lesser known portrait of an unknown woman by Peter Paul Rubens titled, "Young Woman With a Rosary", is not actually about this woman, her assumed piety, or her youth. This portrait is ultimately about wealth, power, and social climbing.  A portrait of this sort, which by its very existence conveyed the wealth of the family, if not the lady herself, was meant, largely, to present her as a suitable match to another wealthy family, and also to proclaim in the loudest possible way, the education, refinement, and station of the family as a whole, not only the person represented.  As the visual emissary, she is taking the heat for supporting the primacy of her entire clan.  As such, the clothing she wears must in every respect reflect all the aspects they most wish to present. 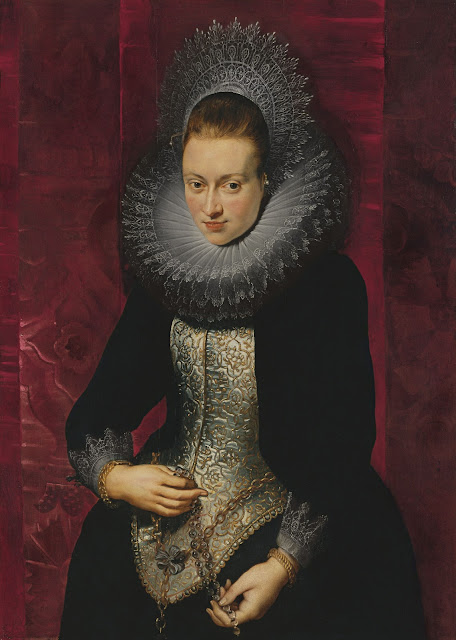 In this case, its a complete success.  Now, we must give credit first to Mr Rubens, whose steadfast attention to detail brings this so fully to life for us.  The painting was done about 1609 or 10, and shows us a lady of substantial means, who might actually be from a wealthy merchant family, but who is being presented in a way that implies an innate supremacy of bearing and taste, that would well suit a noble house.
The gown she wears is unrelieved black, implying a soberness of demeanor, and common sense.    Her corseted bodice however, is of silver silk, and lavished embroidered with gold arabesques, communicating the wealth of her dowry to come.  The fact that this intensely embellished part of her clothing is closest to her body, and closest to where her sexual organs are is not an accident. Much is implied by this, too.  She also wears a long gold chain girdle, probably with a pomander at the end point, which would indicate she is a lady of refinement, who is accustomed to high levels of cleanliness.  Her glass, or possibly quartz crystal rosary, is the sort of item only the richest could afford, so this small cue is a loud indicator to any who look at this painting, of the lady's worthiness as a wife.  She is suspected of being pious, sensible, virtuous.  And lastly, her vast ruff collar, cuffs, and headdress of hand worked lace, are of the costliest, and the most profound expression of the bounty being offered. 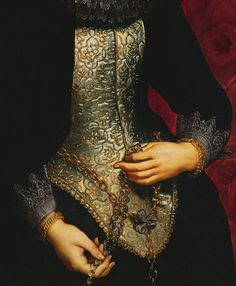 This is not just a painting, its an advertisement for sale of goods offered.  Women of today could, and should bristle at this.  But this is what was being communicated by the apparel of the wealthy in this time.  Women, as chattels, were caparisoned to make them most marketable. And no expense was spared in presenting them to future suitors as well as might be.  The Attire language was brought to bear in full force to enhance, and enumerate the positive qualities of the lady in question.  If you have any notion that Attire is not a potent and motivating force across the globe, I would commend you to the museums of the world. Take a good long look at what these pictured people, are actually saying. 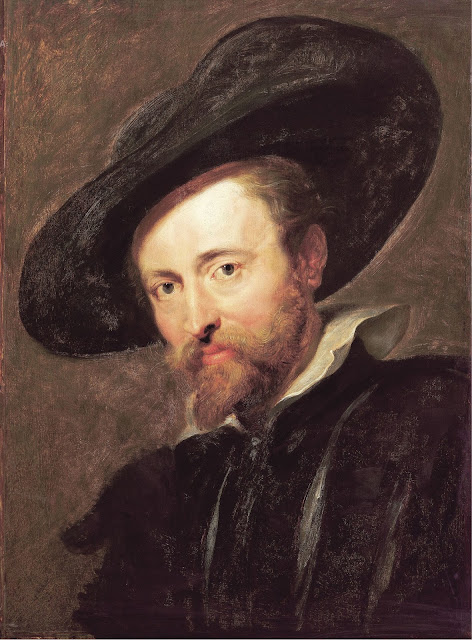 And cause I wanted to, Mr Rubens his very self.  (That HAT!)