Once a week I take you by the hand down the path that has many turning, the path that leads through my overly full brain.  Its that time again.  So,...give me your hand and we will traipse through my synapses and see what we find. 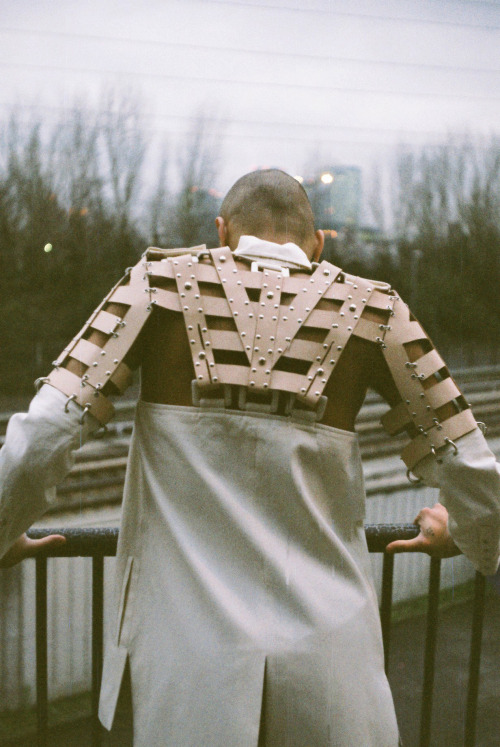 Out of the gate first today is this interesting, if unsettling item.  I suppose we should refer to this as a coat, since it is long along the sides, though the harness top is open to air.  It seems profoundly orthopedic to me in its feeling, and expression.  Perhaps that was the designer's intent; to challenge us to see something medical in nature, and more than a bit bondagey, as something beautiful in its own right.  I confess that even I, with my appreciation of the Avant Garde in the world,  am having trouble with this one.  Perhaps its how raw and unfinished the leather of the straps is.  Perhaps its the fierce rigidity of the straps. I'm really not sure. Nonetheless, this is a compelling thing and something that inspires deep conversation about sexuality, madness, and function. Designer Lan Yu sent this, I admit, to my eye, somewhat ever designed evening dress down the runway recently.  What struck me though was the dialog about sexuality that is in play. We have for centuries, millennia really, promoted women as sexual objects, that should be idolized, but otherwise ignored.  This image of woman, is at once a powerful, but fragile one. We are encouraged by the color and her confident stride to see her as powerful, but the sheerness and slouchy, over sized fit encourages us to think that her clothing would be easily removed from her. So what are we ultimately trying to say?  To me this garment fails, because its not one thing truly, or another.  If we are going to use this language, then the words must have clear meanings. 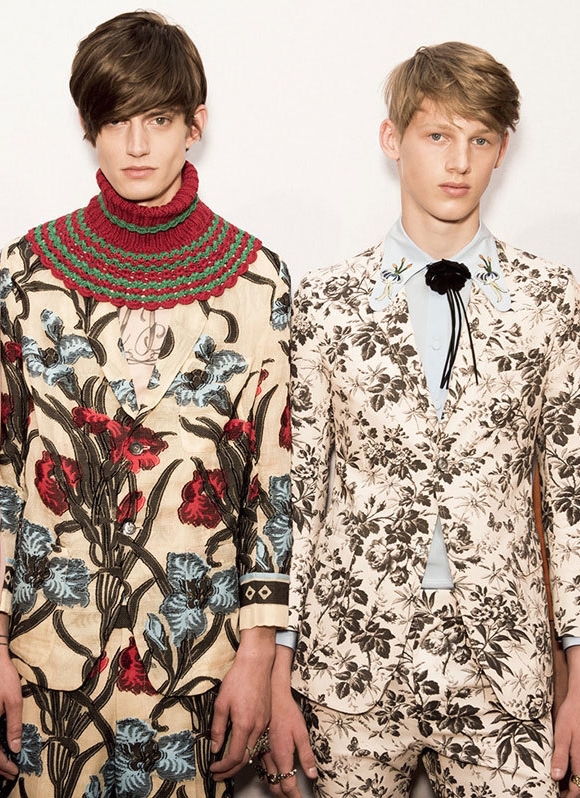 Mkay.  Menswear is facing challenges to tradition. This we all know, and I have chatted about repeatedly.  These are two efforts from Gucci for the S/S 2016 season.  Um. No. Just plain no.  Why, you ask, am I of all people saying no?  Because both of these garments neither flatter, nor define the person within them. Both model's bodies are utterly obliterated by the large patterns over them.  And while I have no issue as such with shortened sleeves, these do not reach a point that is appealing. They exist at some mid point that makes them appear merely shrunken.  What I do like, actually is the knitted dickey, collar thingy.  I can imagine that item moving forward easily into real world wear in myriad manifestations.  Sorry Gucci, to disagree. 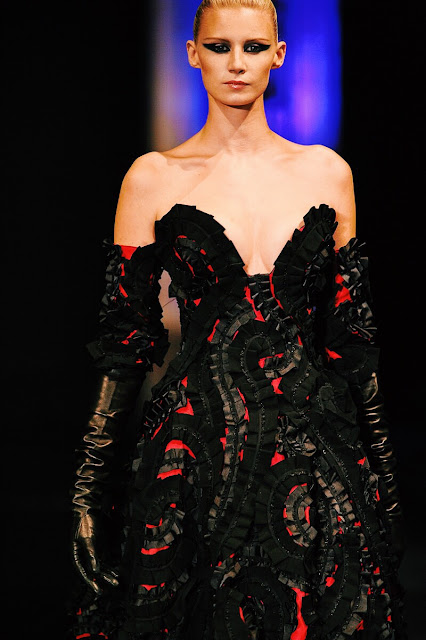 The use of box pleated trimming as a dress detail is a long standing and well used technique.  its made itself known on hemlines necklines and all sorts of other places.  What it has never done to my knowledge is sinuously twine hither and yon all over the entirely of a garment, creating a completely new texture.  Eymeric Francois turned this out and turned this old technique on its head.  I can't say I love the garment, but I love what was done.  I would enjoy seeing more experiments using this, and other old techniques to see if they might have relevance in the modern Attire language. 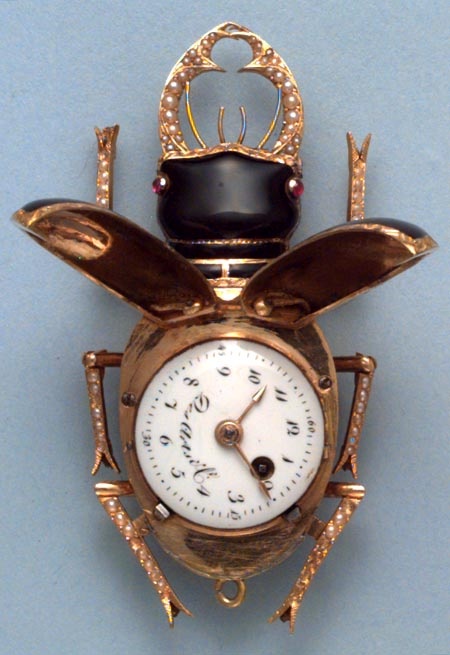 Okay.  So, in the late 18th century this amazing pearl faced watch was created.  Its a gold stag beetle, with hinged wing covers that reveal the watch face.  The eyes are tiny cabochon rubies.  The legs and pincers are detailed with minute seed pearls to give the surface texture.  What is important to remember is that when this was made, watches were the exclusive province of the wealthy, so the level of design originality was very high. 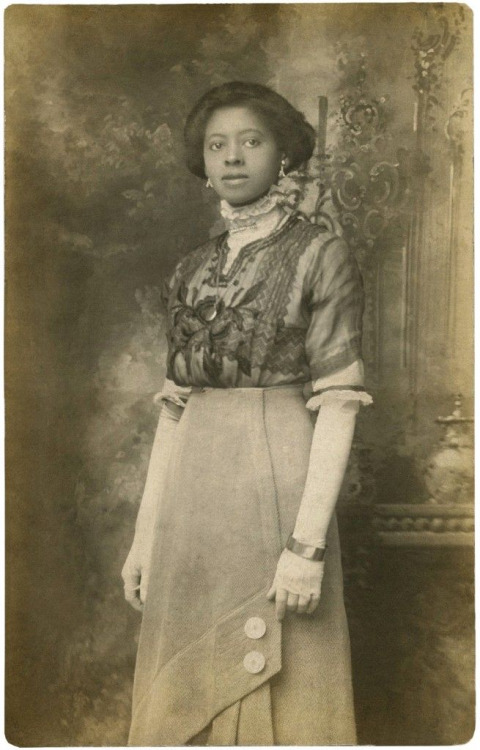 When I came across this wistfully lovely young lady, I could not help but post her.  There are endless parades of gorgeous girls from the Victorian era, all of them Caucasian.  To find this young woman, and clearly a person of some means by her dress, that is not a white girl, is a wonder, and a delight.  We tend, especially in the United States, to forget that some former slaves became well to do people once they had the chance of advancement.  But to be honest, for me there is something haunting in her gaze. There is something yearning, and profound in it. Perhaps I'm seeing what I want to. Entirely possible, that.  And as far as her apparel is concerned, she is dressed with taste, elegance, and restraint, which the Victorian era was hardly known for.  So Brava to her! Texture, proportion, color.  All these add their elements to the totality of the statement we make with our apparel.  The rigidity, and animality of the coat, give a strength to the image that we cannot deny.  The close fit, cuirass-like, of the bodice, with its firm structure, is rather like armor.  So what we come away with is Woman Of Power.  It hardly matters that she is thin as a pencil. We believe she is strong because of what we see around her.  The power of Attire is such that we can ignore what the observable reality is in favor of the adopted fantasy.  But when Attire works best is when we tell our total truth with what we wear. 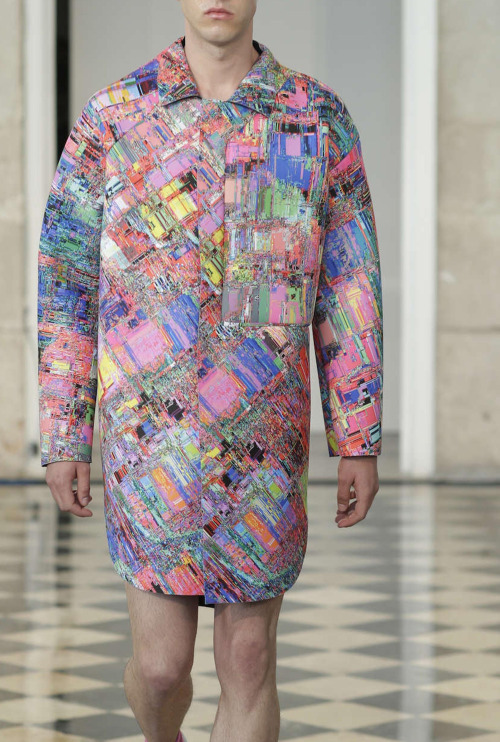 More Avant Garde menswear. Will he EVER shut up about it?  Nope. probably not, so get used to it.   Honestly, I like this coat a lot. I just wish the designer had chosen to pair it with something, anything.  I can see it with a pair of trimly cut trousers and boots, or a narrowly cut floor length tunic or skirt.  What do you think it should be worn with.  Be nice now,...(grin) 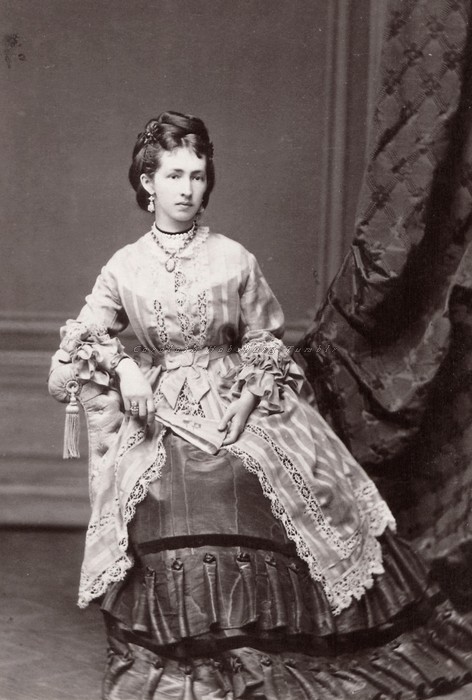 By the 1870s the vast crinolined skirts of the mid century had collapsed like a deflating balloon.  But the volume had to start going somewhere.  First of all, both the scale, and the amount of surface decoration increased to compensate for the loss of circumference.  And as well the hair dress styles which had been closer to the head, and lower, rose to greater heights and began to rely more and more on padding, wiglets and other false hair additions. In short order this look would be supplanted by the first iteration of the bustle, which would draw all the skirt volume to the rear.  The level of decorative detail will increase decade by decade as the desire for class distinction continues to get more heated. 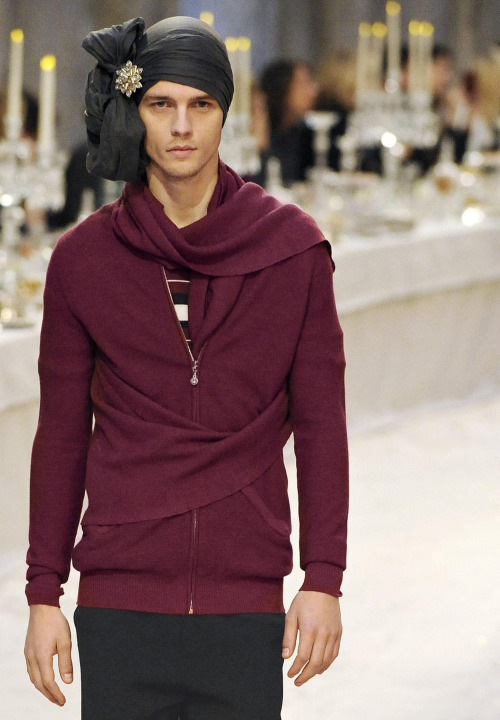 Of the Chanel Pre Fall collection from 2012, which had an Indian Raj feel to it, this is perhaps the most sedate entry.  two things appeal to me here and speak tome as things that could express more fully in real world terms.  One is the turban, about which I've spoken before. I think they could be widely and eloquently used in larger senses than they are. The other is the knitted scarf twining about the body.  Sure this fellow, with his lean frame carries it well, but I think that long thin scarves of this sort could be very effective for many people, and quite expressive. 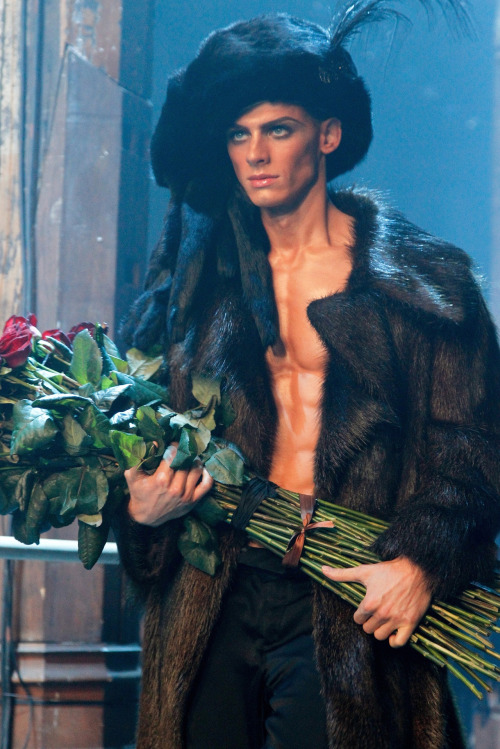 2011, John Galliano.  Menswear. regardless of the cray cray he is freighted with by the media, I have always loved his deeply romantic, rather perverse aesthetic.  The way we are challenged by the interplay of bare taut skin, eye makeup, abundant fur, and huge proportions.  Its sexy, depraved looking, slightly dangerous, and altogether intriguing.  So little of what he has done is real world applicable, but lordy, do I wish it were. 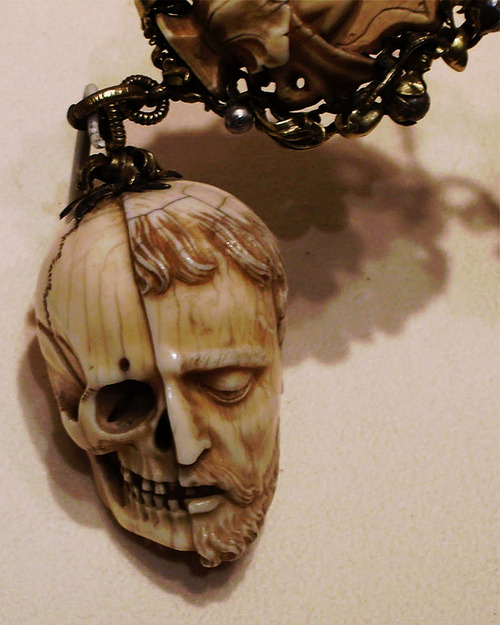 As the last entry today a bit of Memento Mori.  The practice of creating, using, and wearing items that specifically referenced the loss of loved ones is an old one, though it had its greatest popularity during the Victorian age.  This remarkable image is a close up of a carved ivory rosary made in the early 1500s. What makes it special and of interest apart form its obvious quality of craft is that the deceased has been accurately portrayed as a pendant below the  cross at the bottom of the rosary.  And to make it even more intriguing and unsettling, the face is only half there, with the skull beneath revealed for our view.  To our modern way of thinking such items would be considered wallowing in grief.  But to the people of times when life was short, and quite uncertain, remembering those who had passed must've been that much more vital, because of their short time here.

Sorry to leave you with a downer, but it felt like the right final thing this week.  I hope you all have a splendid weekend!