I look at that number and can hardly believe that I've put so many editions of the scatter post up, but there it is.  But my little head keeps getting filled up with stuff that I really have to share, so, here goes. 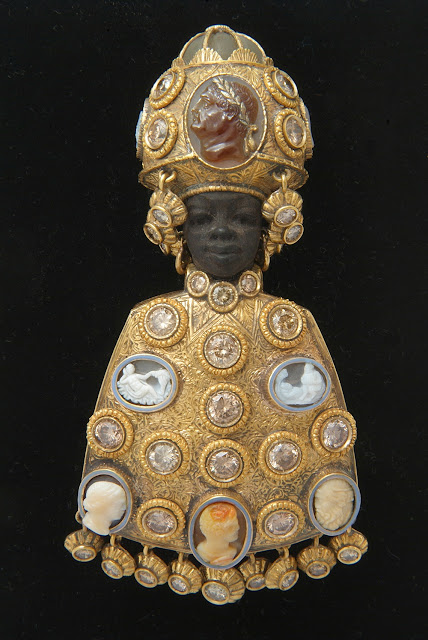 Atillo Cadognato has been one of the premier jewelers in Venice since 1866, making a name for themselves by creating uniquely imaginative pieces that speak to the Venetian love of fantasy.  And they are still there, just off of St Mark's Square.  This blackamoor brooch is a wonderful example of their craft.  The expressively carved ebony wood portrait is mounted in a densely chased gold torso and turban-like headdress.  Both the turban and the lower half are set with rose cut diamonds, and antique cameos.  To our modern sensibilities, the image recalls slavery and subjugation, however luxuriously clad the boy is, but it was an accepted cultural concept at the time, and was considered a romantic evocation of a past age.  Its a commonplace that when we call up a bygone society, we tend to do so without remembering the less savory parts of it. 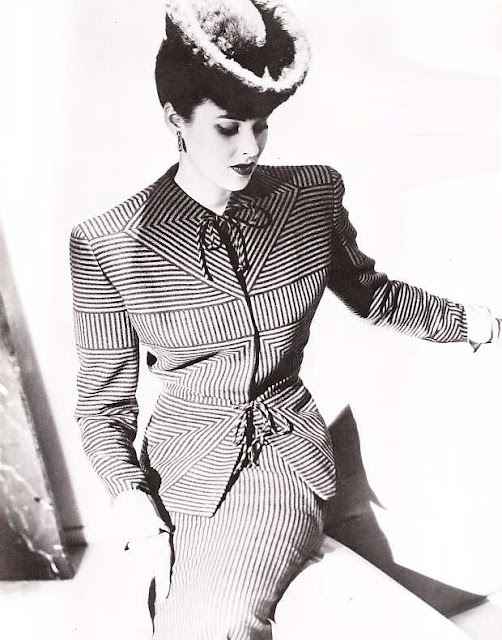 A few days back I did a post about the effect of stripes.  This suit by Gilbert Adrian is perhaps one of the best examples of the adroit use of stripes to create and enhance shape.  Everything about this is successful, mostly because of the perfect construction.  Coming as it does from his post MGM years ,when he operated a couture business in Los Angeles, this is a WWII design, and adheres to the fabric restrictions in place by its astonishing use of the striped textile.  By mitering the fabric, and inserting bands of it, he was able to make this amazing ensemble, while still staying withing the 2.5 yard maximum allowed for a suit. 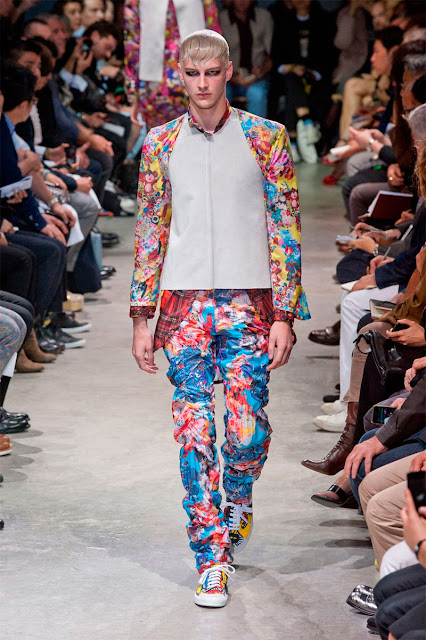 Commes des Garcons has made their name by continually testing the limits, and oft times trying the patience. This is, for them a less challenging effort, though it still does some button pushing.  I confess to being divided in my feelings about it.  On one level, I love the brilliant color, counterbalanced with the stark white of the jacket front.  But, though I realize the fitting is intentional, it doesn't feel to me as if it entirely works.  Thoughts? 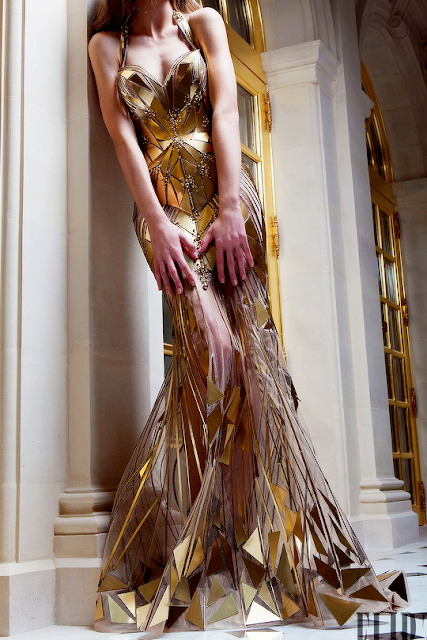 Though this is one of those uber sheer things that we are beset with these days, this at least is interesting for what comprises the opaque parts.  Gold metallic plastic polygons and strips are attached, armor-like to the sheer base.  It creates, to my mind, an interesting juxtaposition, between the frank body revealing aspect and the protective layering implied by the rigid metallic pieces. Robert Abi Nader S/S 2015. 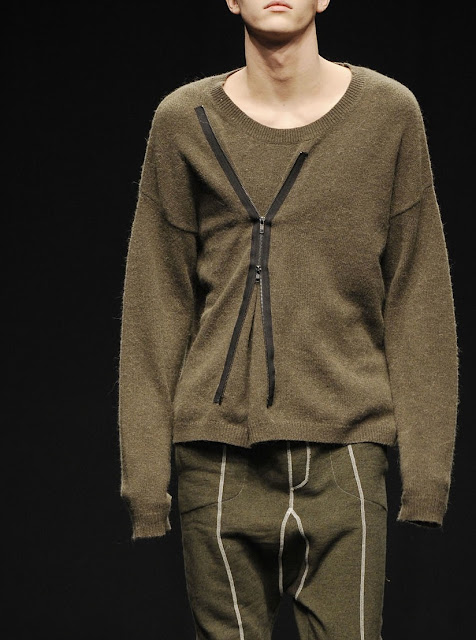 Sometimes its a single idea, even if its not one I find entirely successful, that sparks my imagination and makes me think of other possibilities.  This design from Topman is one of those.  The idea of the body mounted zipper that changes the proportion and fit of the garment is an interesting one.  I can imagine this being used to great effect on shirts, coats, or dresses.  used with thoughtfulness and careful placement the design element of the lines of the zipper could add greatly to the finished work, and the versatility of it would be amazing. 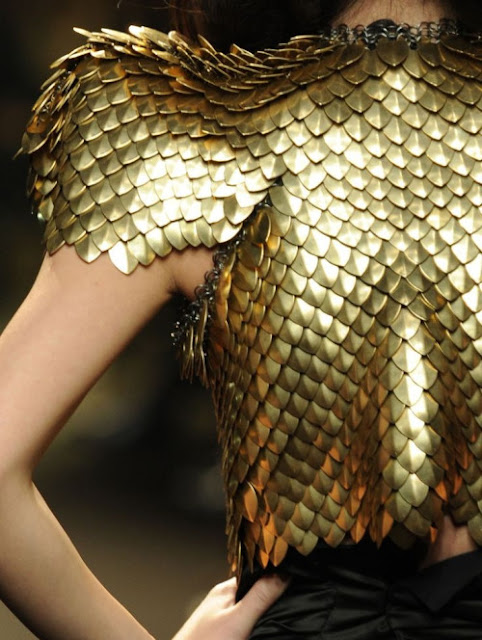 The lengths we go to, at times to mimic that which we see in the natural world, then transform it to our taste is amazing to me.  This detail image is of a work by Alexandre Vaulthier.  The top is done entirely in metal plates that resemble the scales of some kind of lizard.  Its sexy, dangerous, and makes you want to touch it, feel  it moving under your hand.  The influence such things have on us, the density of a texture like this, for example is profound, inescapable and deep seated.  Its our animal curiosity coming out. We want to understand what this strange thing is.  And would I wear a shirt made in this way?  Oh hells to the yeah I would. 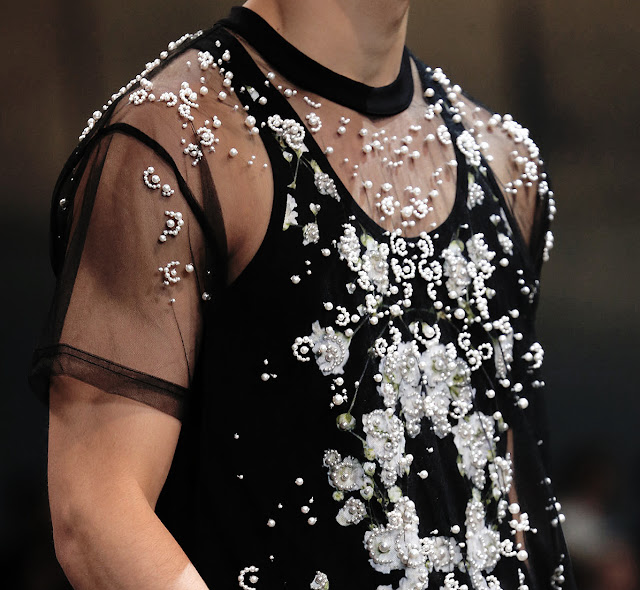 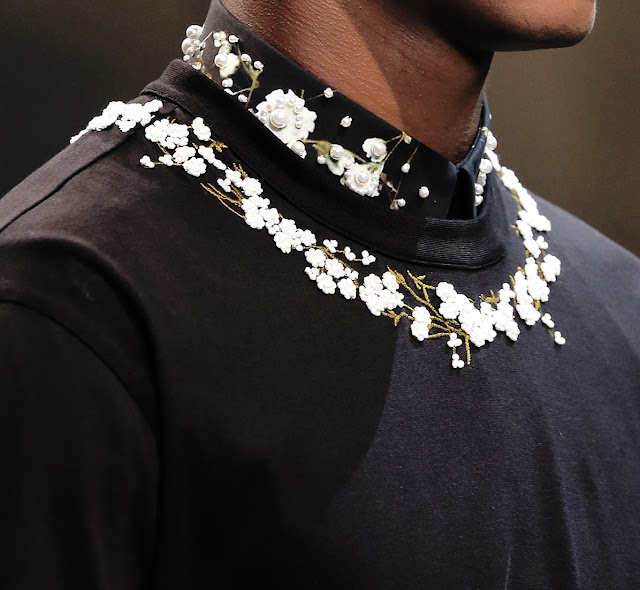 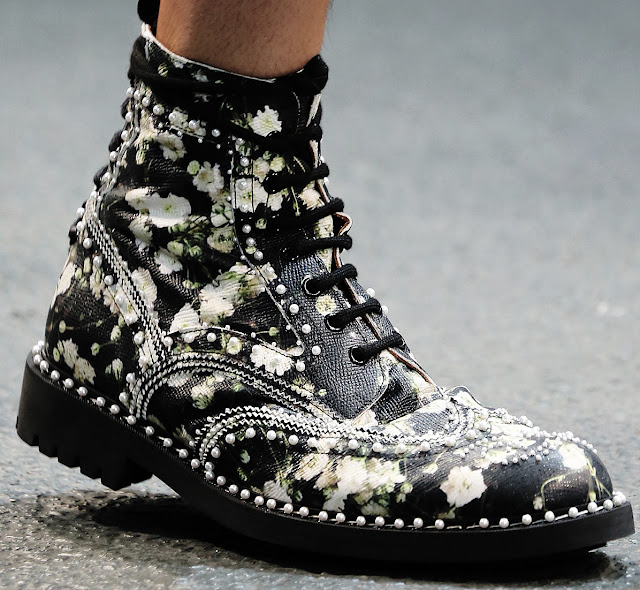 As the changes keep on rolling along with menswear, bead work embellishment has begun to show up on men's clothing, in the couture realm.  Sure its not on the streets yet, but watch for it.  This is one that's going to trickle down to the mass marketplace.  It won't look like this, but I can easily imagine some seriously industrial looking embroidery work with say, gunmetal finish beads making a splash.  Its yet another way that the Attire language is adjusting itself to accommodate the changes in men's attitudes about themselves and what they are comfortable with conveying. 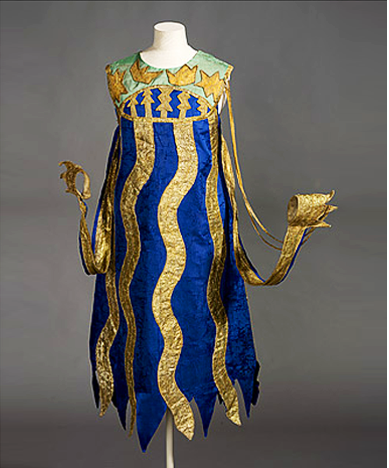 The Ballet Russes directed by Sergei Diaghilev was one of the most influential artistic forces at the beginning of the 20th century, eventually spreading across all manner of design areas, including apparel and textile design.   One of the people who designed for the troupe was a woman named Natalia Goncharova, who conceived this dance costume in 1916. She was also an artist, and a textile and set designer.  Here is a quote from Diaghilev concerning her:
"The most celebrated of these advanced painters is a woman.This woman has all Saint Petersburg and all Moscow at her feet. And you will be interested to know that she has imitators not only of her paintings but of her person. She has started a fashion of nightdress-frocks in black and white, blue and orange. But that is nothing. She has painted flowers on her face. And soon the nobility and Bohemia will be driving out in sledges, with horses and houses drawn and painted on their cheeks, foreheads and necks” 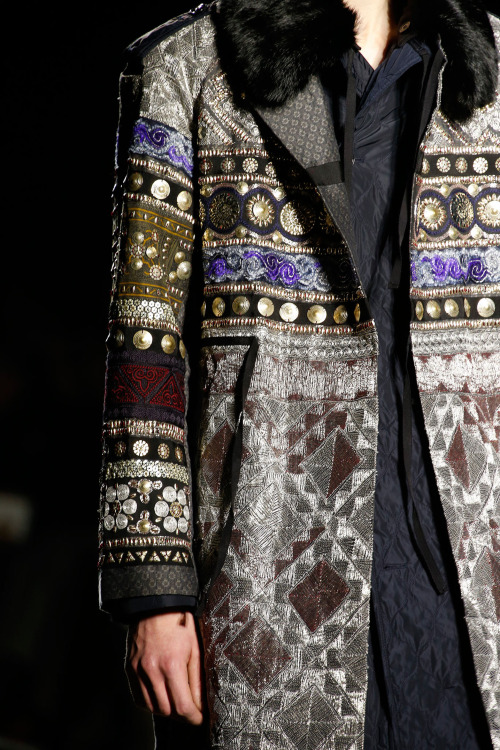 Returning to the surface embellishment idea emerging in menswear, here's an effort from Dries Van Notten that could more easily find a way into the real world.  The metal discs in gold create a slightly barbaric, Byzantine feel to this that, with slight alteration, could work out on the streets.  Part of what makes this work so well in my opinion is that the decorative elements are entirely in harmony with the textile in use and the proportions of the coat.  I would, and could wear the hell out of this.  And all this is emblematic of the continuing evolution of how us fellas are allowing ourselves to be seen.  All to the good, really. 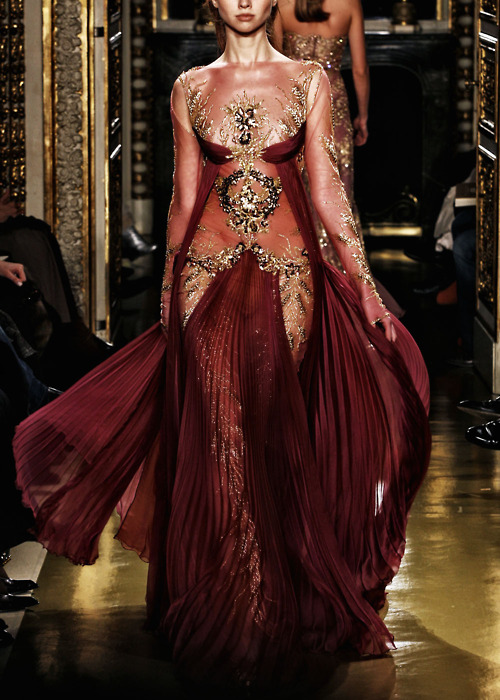 As an article of potent sexual fantasy this is an amazement.  Is this something that has any relevance in the real world? Nope. This is the costume for the head courtesan in some Sci Fi fantasy film. She's a powerful, smart, and dangerous lady.  Though she's a courtesan, she's the one pulling the strings behind the scenes, and behind the backs of her supporters.   When something like this trots out onto a runway, I have to smile at the delicious absurdity of it.  And I have nothing but admiration for the expert workmanship on display here. 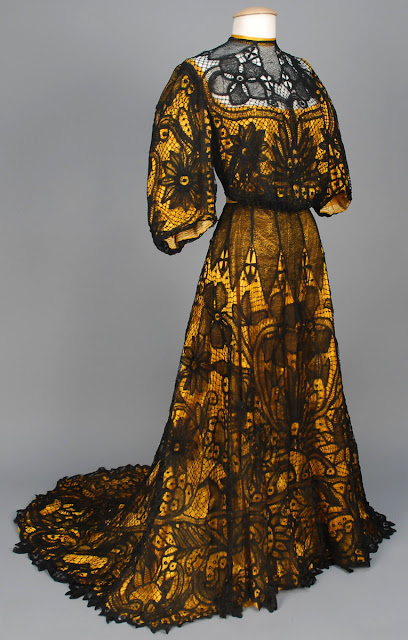 The concept of the afternoon dress was an essentially Victorian one, and one reserved for the middle and upper classes.  A dress such as this was deemed acceptable for the lady of the house to wear when she was expecting visitors, or is she and the family were dining at home, without guests. Typically, such dresses maintained the full length sleeves of day wear, as well as the enclosed neckline.  But what changed it to an afternoon garment was the use of more formal textiles, and more fragile ones. Where a day garment would rely on wool, cotton, or linen primarily, an afternoon frock would introduce silk, and as here, substantial amounts of lace, far too delicate for working about the house.  This dress is of chromium yellow silk with a complete overdress of black lace.  This lady was not the sort who would have been on her knees herself scrubbing the kitchen floor. 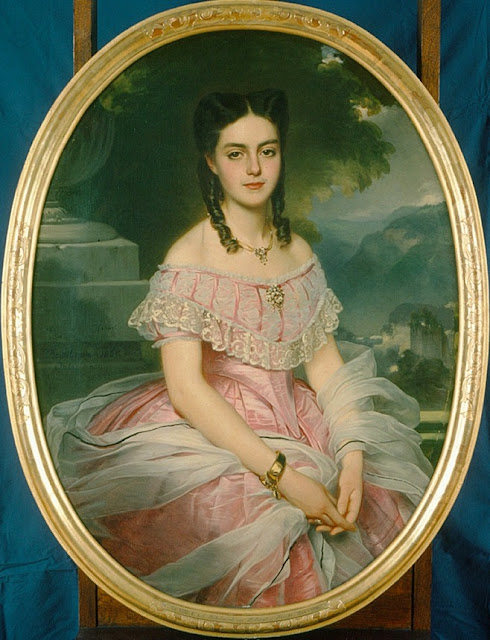 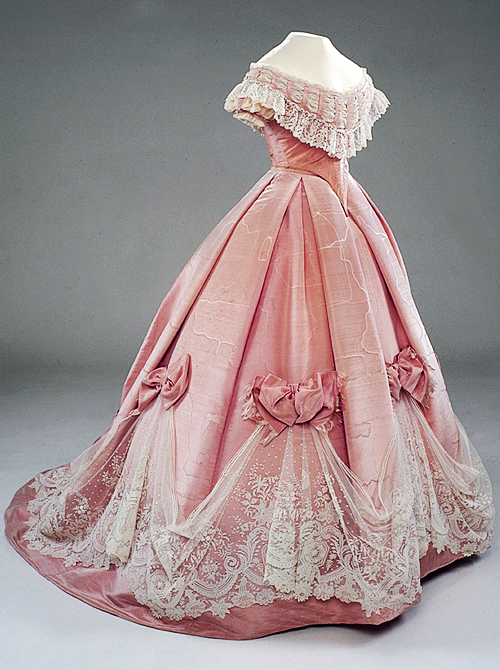 It is not common for us to have both an image of a person, and the garment they wore in it preserved, so, when it does occur,  its a special treat.  This is Countess Anna Friderika Wilhelmina von Hallwyl, as painted by Charles-Eduoard Boutibonne in 1865.  The dress she wears survives as part of the collection of the Hallwyl Museum.  The gown of shell pink silk moire' taffeta has a deeply box pleated skirt surrounded with swagged panel of white Alecenon lace, held at the points.  The bodice has a pronounced point with rows of ruched tulle held by bands of the pink silk, with a ruffled trimming of lace.  Its condition is superb, which implies that it was worn a few times only and then carefully packed away.  The color has not even faded.  A glorious example of the best of the fashions of the time.  As well, this dress very well may be from Worth, though I haven't been able to find confirmation of that. it surely bears the dramatic flair the house had already become known for.


That wraps up this week's edition of Scatter. So go out and enjoy that weekend of yours!