Its time to refer to something that relates to the gents out there.  This three piece suit of clothes is the granddaddy of the three piecer you very well may have in your closet right now. Sure, the notion of a full set of clothes that all companioned each other was not by any stretch a new one.  But it was at this time that the shapes we understand and use really began to take form.
With blessings upon the Met and their astonishing collection, this French court suit. 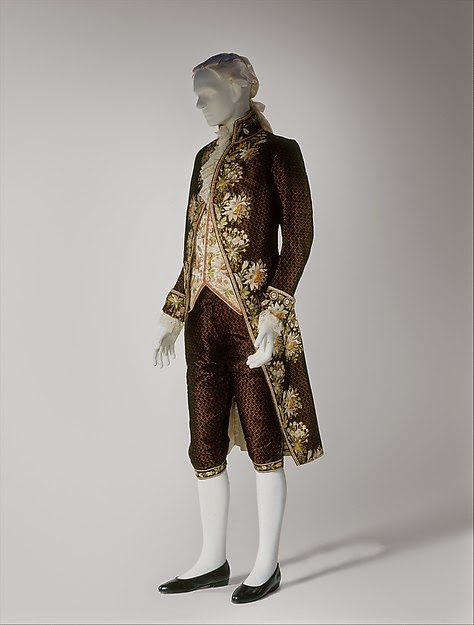 The base fabric is a silk brocade in a small scale geometric design in a deep coffee brown with a nearly copper color, and a bone tone, embroidered in multiple colors in a complex floral pattern. 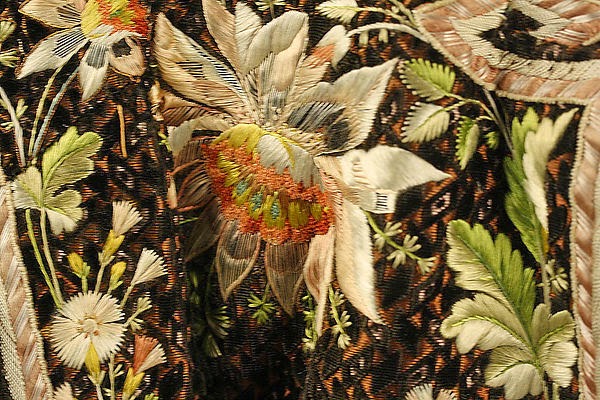 The method used in creating such suits was very different from now.  The embroidery lavished on the collar, coat fronts, cuffs, pockets, coat tails and back, and even button was done at an embroiderers, before the fabric was ever cut out.  A gentleman would go to the fabric merchant and select the textile he wished, then have it embroidered to his taste, after that it would go to his tailor to be cut out and assembled to suit the fit the gentleman wished. 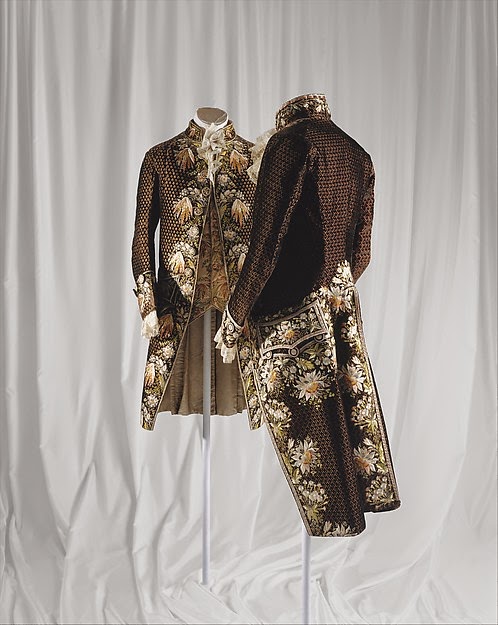 The relative shapes of the three pieces of the habit de cour reached the point you see here around 1780.  The cut of the coat is beginning to look like something contemporary, the waistcoat, losing its length is precisely modern in cut, and the breeches have achieved the more trim cut that would become a part of men's apparel from that day to this.
A suit like this one, made up entirely in silks and luxuriously embroidered would have been required evening and formal wear at court functions. At the extreme end of things, suits of this type could be festooned with gold or silver lace, and scattered with metal sequins, with paste, or even genuine precious stones.  Even the buttons were embellished, often, as here, covered in the suit fabric and embroidered over their entire surface to match the suit. 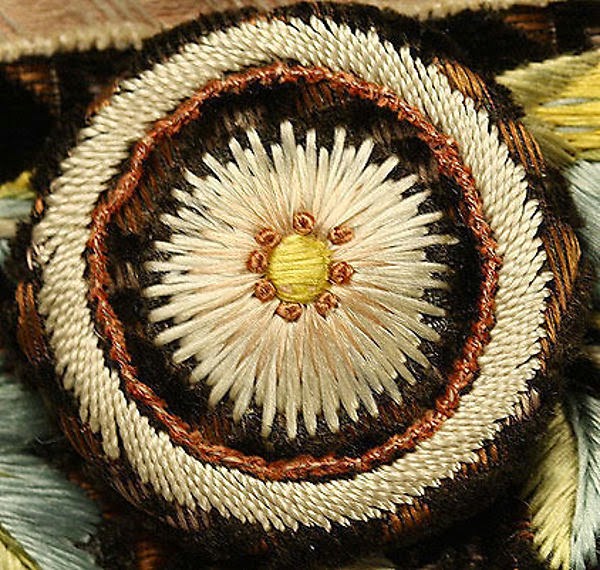 The waistcoat was very often a different fabric in a lighter color, but embroidered if not to match, then, as in this case, to relate well to the colors and style of the suit embroidery. And, as you can readily see, without the skirts on the waistcoat, the cut shows almost no difference from a modern vest. 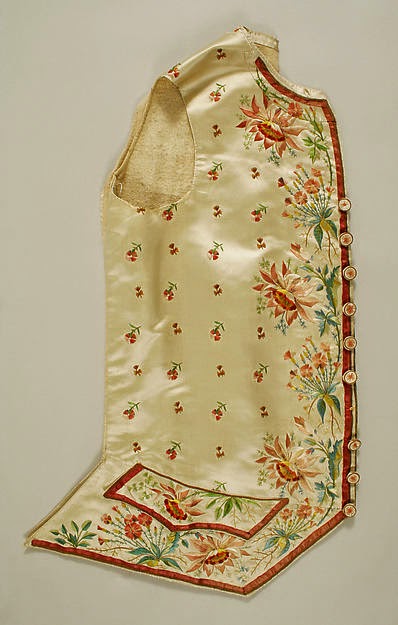 I have written before about the sudden freezing of menswear into a single format that is only now being seriously challenged.  It began just after this point.  Once the form you see here became ubiquitous, and the revolutions in France and America built the desire for a more democratized appearance, the chill set in and slowed the forward progress of men's clothing to a crawl.
There have been times since this fashion that a similarity of cut and feel has crept quietly into men's clothing again, most notably during the Peacock Revolution of the 1960s, when young men experimented a while with looks garnered from other times. Its only now, though, that men's apparel is really beginning to explore this style again, not in terms of recreating it entirely, but gleaning ideas from it, and so it regains currency in the modern Attire language.