This has been a busy week, what with having house guests, and more social stuff going on than usual, in addition to the regular work week, so, the regular Scatter post has come around even more quickly than usual for me.
Lets dive in, shall we? 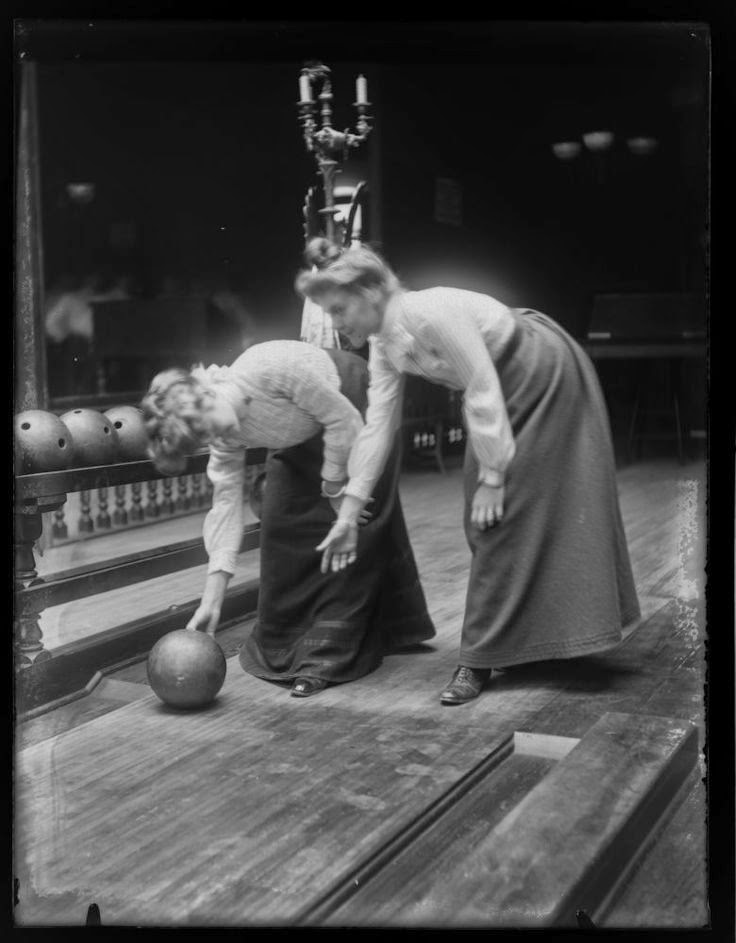 This first image is unique in that its showing women engaged in sport, first of all. What is also interesting about this is that these two ladies are both wearing what quickly became the uniform for women of nearly every station in life. A seven gore skirt, and a shirtwaist.  It became so ubiquitous because it was a style adaptable to any age, shape and income.  For the lower and middle income women, it was doable as a make at home set of clothes, plus, made up in sturdy materials it could serve well for a long time, in many situations.  For the upper income bracket ladies, merely upgrade the textiles and add lots of trimmings and lace and you got a look that was still fairly practical, but also maintained a visual separation from the rest of the ladies out there. 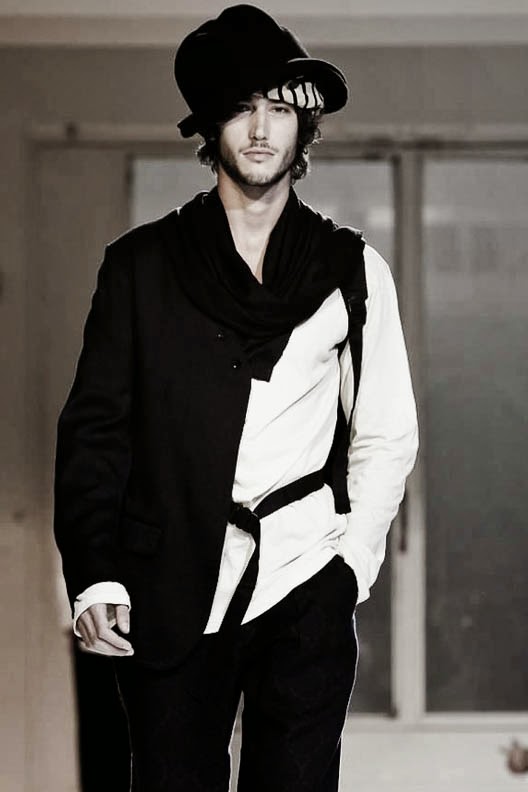 Next up Yohji Yamamoto S/S men's collection for 2015. To be really honest, I'm not quite sure what's going on here.  I find the look compelling anyhow, which is why its posted this week.  There's something about the proportions here that is working for me that I can't pin down, and surely the visual dissonance makes its currency in the Attire dialog more likely, since we have been exploring that as a theme in design for a while.  Perhaps its really the odd hat that I like so well.  Dunno, tell me what you think! 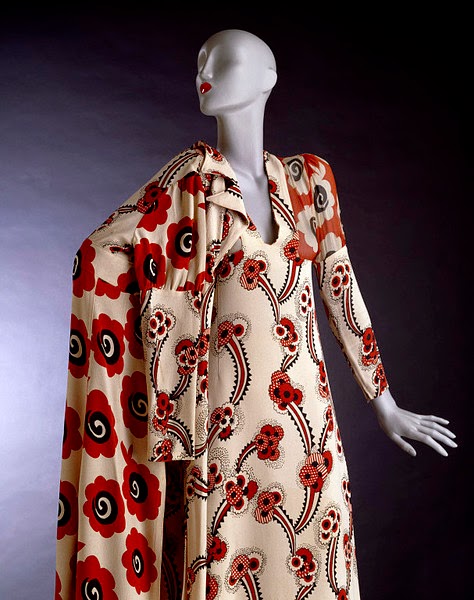 This outfit came from the talented mind and hand of English designer Ossie Clark. During his peak years, from 1965 to 1974 he was one of the strongest of the new young designers out there.  His real strength?  He made clothes that were appealing to wear in real world terms, not just mod for the sake of being mod.  This outfit is sweetly emblematic of Clark's style sensibility.  The coat and dress in companioned prints are easy, slyly sexy, and just a little cheeky.  He understood that women wanted to be desired, and created clothing that spoke that to others, but with a good deal of class. 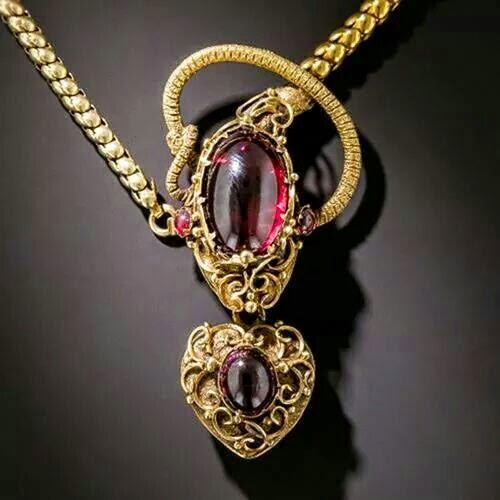 This gold snake pendant necklace is from 1860, and by its design places it into the hands of some lady with deeply romantic notions.  This was for a lady who read Sir Walter Scott and liked her music tempestuous.  Carrying two large cabochon garnets, the highly stylized snake head holds a pendant heart in its teeth.  I'll leave it to you to determine what that might imply.  But the phrase femme fatale comes to mind. 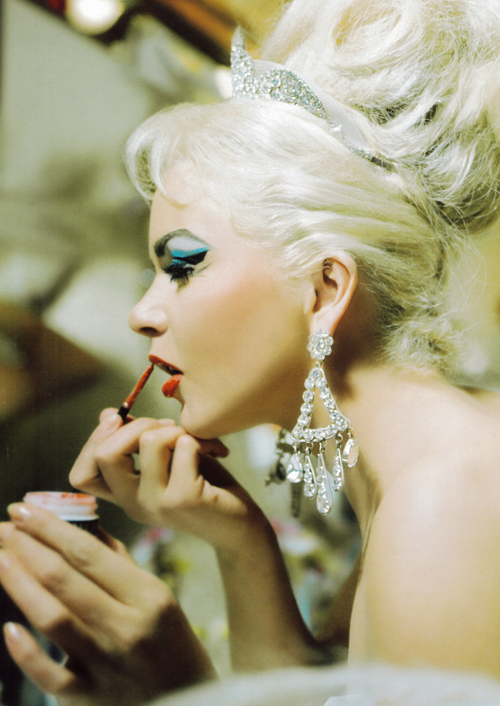 Dressing ourselves is about artifice, and we do it to greater and lesser degrees depending on our needs and professions.  This lady is a master of the art of artifice. Shot at the Tropicana Hotel in Las Vegas in 1969, this pretty young woman is in the process, through skillful application of make up, hair and jewelry, of turning herself from a pretty but not dazzling young woman, into an unforgettable image of idealized sexual beauty.  We are willing to put ourselves through an amazing amount of trouble to get to even part of this.  Sure, its for the stage, and sure her job is all about being objectified.  Got it.  But it says something profound about us that we will go to such lengths to create belief in others, if not ourselves. I did a post a while back about cultural appropriation.  I held this image back from that post.  But now it seems to need to get its moment.  These two Victorian gents are attired completely in Japanese clothing, down to tabi socks and sandals.  What strikes me, and of course I'm projecting here, is that this is not meant in any way to diminish or wrongly acquire someone else's apparel traditions. Rather, this feels to me to be a gesture of respectful admiration.  And of course, I find the easiness and obvious comfort of such clothing very appealing indeed, so I can well understand why a tightly wrapped Victorian Gent would jump at the chance to be so comparisoned. 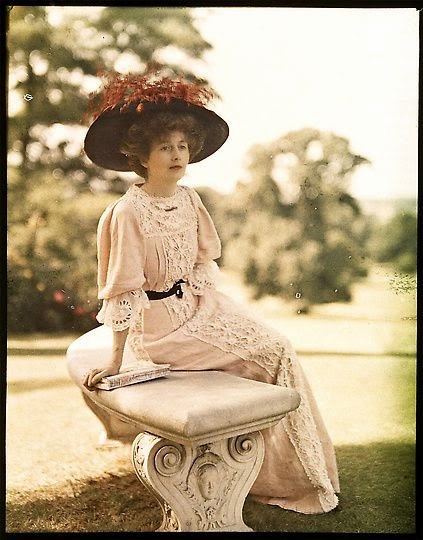 Lionel de Rothchild was not only one of the wealthiest men in Europe, but also a skilled photographer.  He shot this picture of Lady Helen Vincent in 1910.  I'm posting this because, not only is it a wonderful photograph, what she is wearing is expressing the greater ease that was creeping into women's clothing at the the time.  Her waist isn't fiercely compressed, the fit of the dress is fairly loose throughout, and though it has plenty of surface detail, its done with restraint.  Even women of this level of social standing were moving away from the ultra tight clothing of the prior years. 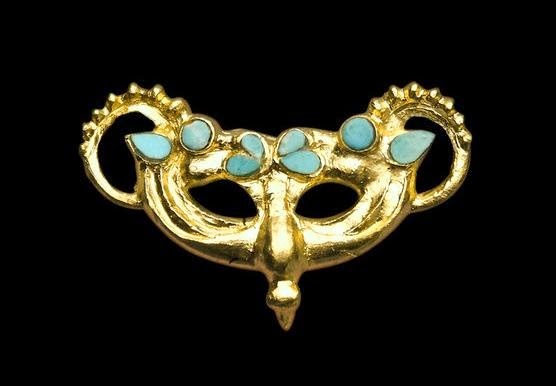 If you were to have to guess when and where this ornament comes from, you might just as well say it was made this year, as say its true date.  This golden cloak ornament is from Kazakhstan and was made in 700 BC.  It takes a bit of looking but it a combination of two things, there are two highly stylized ibex heads facing each other, but the final image created is that of a snow leopard.  Its a remarkable piece of design, and one that reveals that severe visual editing is nothing new at all. 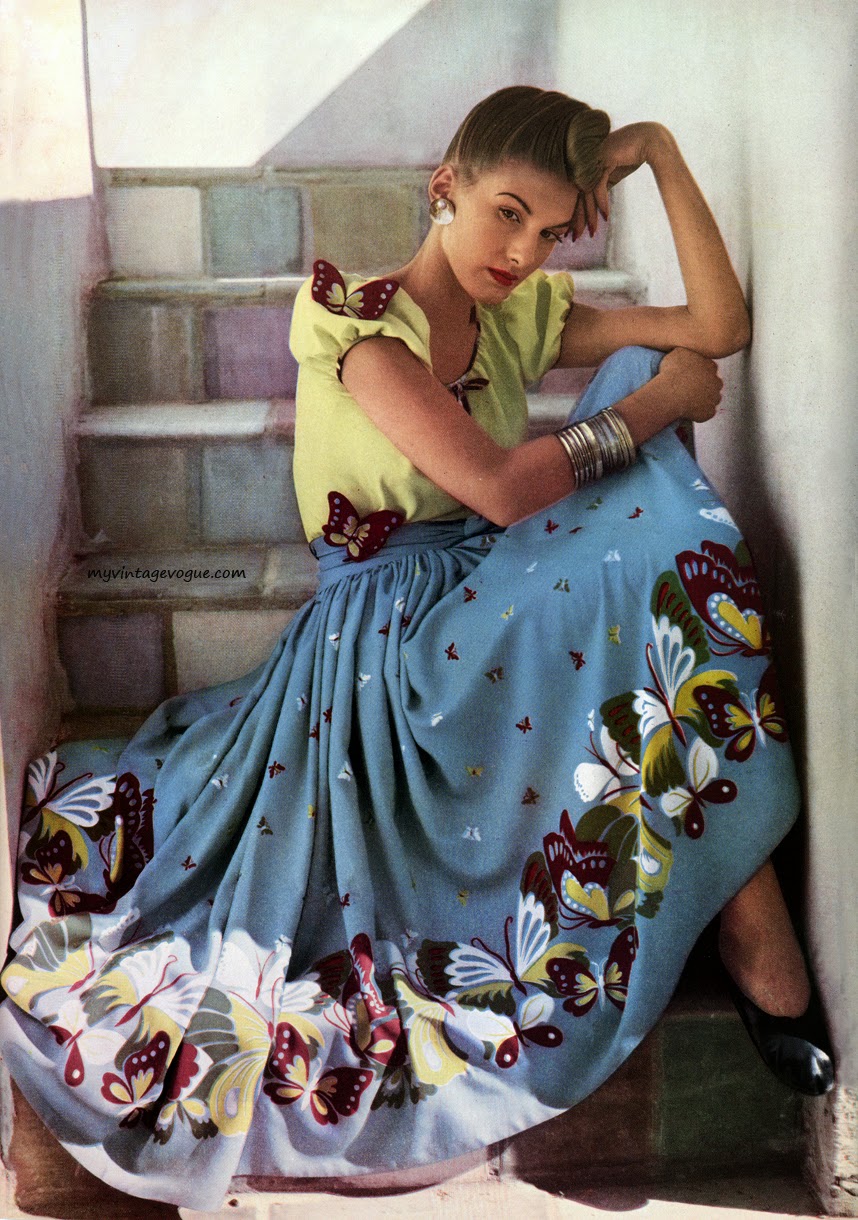 Lousie Dahl Wolfe shot this for Harper's Bazaar in 1942. During the war years, ensembles like this one became very popular because they could transition form day to night.  Rules about nighttime dressing had relaxed a good deal, and so this more bohemian feeling look would have been considered just fine for a dinner out, or for a dinner party at home. I also love the bold, and odd colored border print of the skirt.  its quite an unlikely combination of tones, but they work. 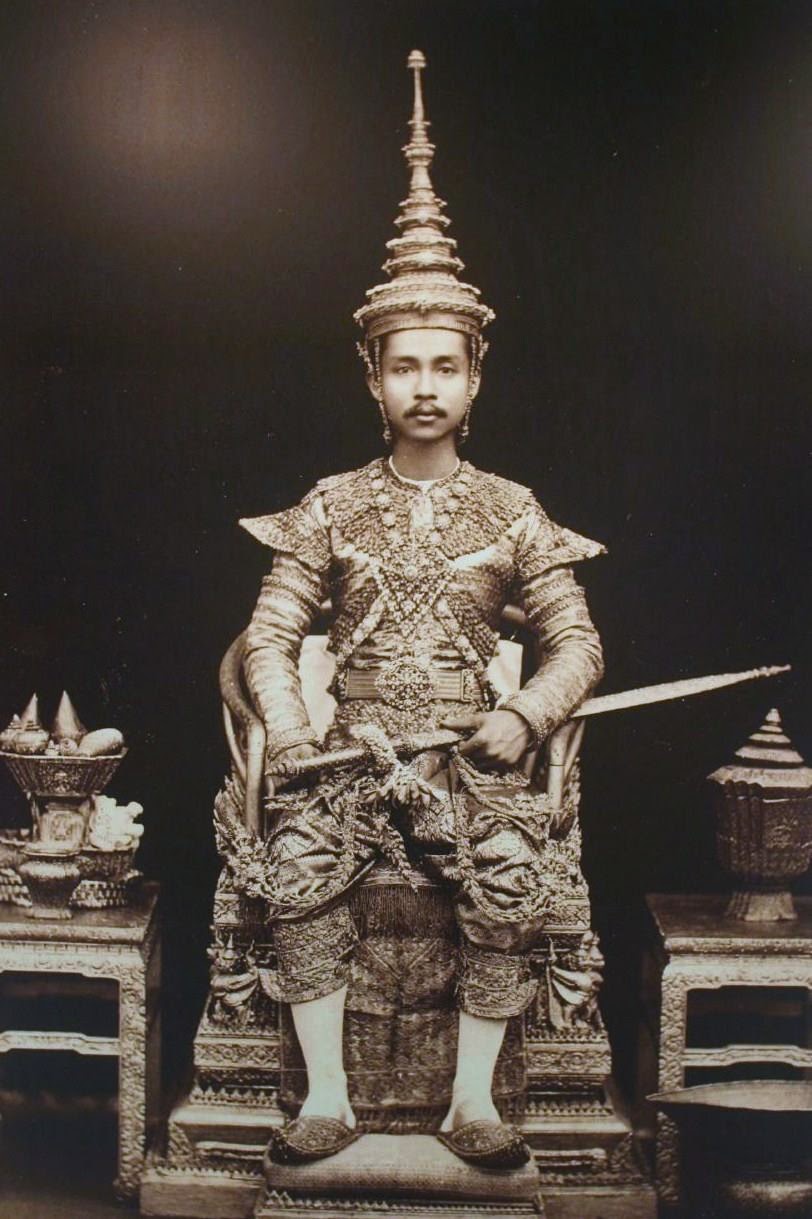 Bringing this week's edition of Scatter to a close, may I present to you His Supreme Siamese Majesty, Rama the Fifth, King Chulalongkorn.  This is the gentleman who was the eldest child taught by Anna Leonowens in the 1860s.  This image, from 1873, shows the young king in full court panoply.  Every detail of his apparel is designed to set him apart form others.  In looking at his clothing, this is an outfit whose sole purpose is to reinforce temporal power, and leave the viewer in no doubt whatever of who is in control.  I find this image interesting also because of the look we get into another culture's sense of proportion and fit.  All in all its a sight that well repays scrutiny.